As I mentioned back on RTAM, I traded in the Hyundai Genesis just before Thanksgiving.

I've been angling to get a 4x4 of some kind since I was old enough to drive and I deliberated over F150s, 100 series Landcruisers, 5th gen 4Runners, and GX470/460s. As much as I wanted an F150, I am not comfortable parking such a long and wide beast, given my terrible depth perception. Plus, I was reluctant to buy another $30k+ vehicle.

After experiencing the solidness of Spectre's 200k old 4Runner, that cemented my decision to be a normie and buy Toyota 4x4 of sorts. Thanks to my time in the Emirates, I really wanted a 100 series Landcruiser. A good one of these at a reasonable price proved elusive and I turned to looking at the Lexus equivalents. The Lexus LX470, while generally cheaper, wasn't my style and didn't do anything for me.

So naturally, I went to test drive a 6 speed Hemi Challenger (my first plan) at a local Carmax. Jesus, they're slow after driving an S550 5.0. Laughably slow. I had an SRT 392 in my sights, but I was after too specific a model (2014 SRT 392 Core 6 speed in Sublime Green or Plum Crazy). And I still wanted a 4x4. So I sampled some GXs at a local dealer and bought this example.

It was a pretty much fully loaded '08 GX470 in silver (not black this time lol) with charcoal interior. It had a little over 100k on the odo when I bought it and it still drove like new. The air suspension was in decent shape, but the shocks were starting to show their age. The dealer performed the timing belt and water pump service for me and I picked it up.

Photo from the dealer. Note the super fancy gold badges 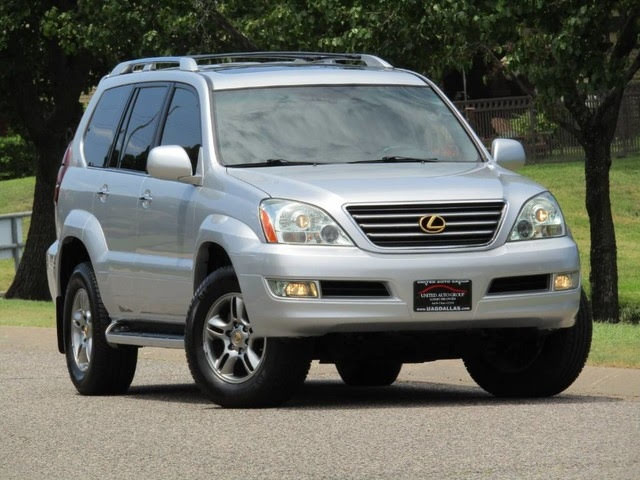 With the dearly departed Bronco and a lot of fucking leaves 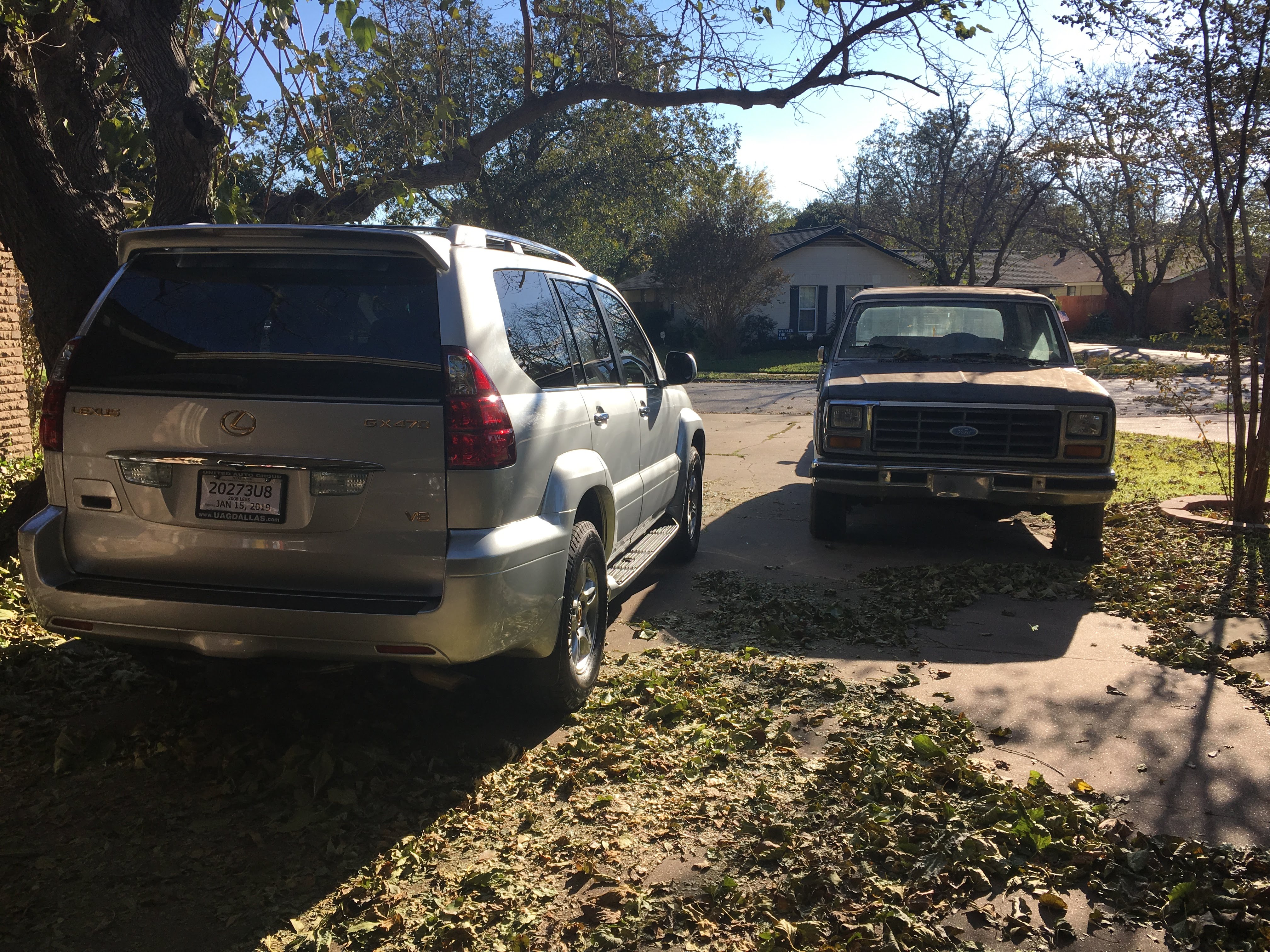 Of course, I couldn't leave it alone for more than a few weeks with those silly stock 30" tires and tired suspension, so I had a 3" Toytec lift installed by Tandem Offroad, running boards removed, and picked up some used 33" BFG KO2s. 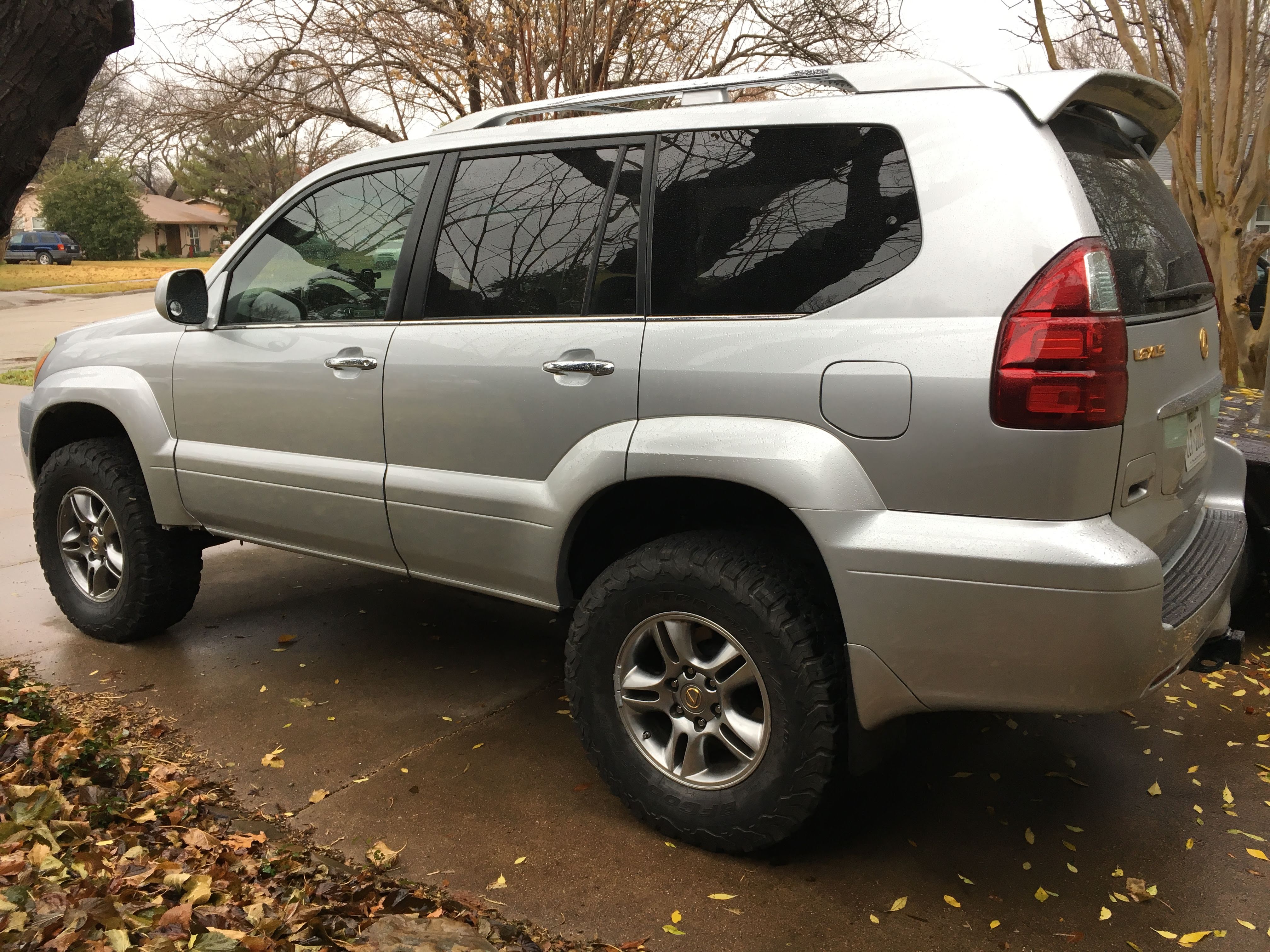 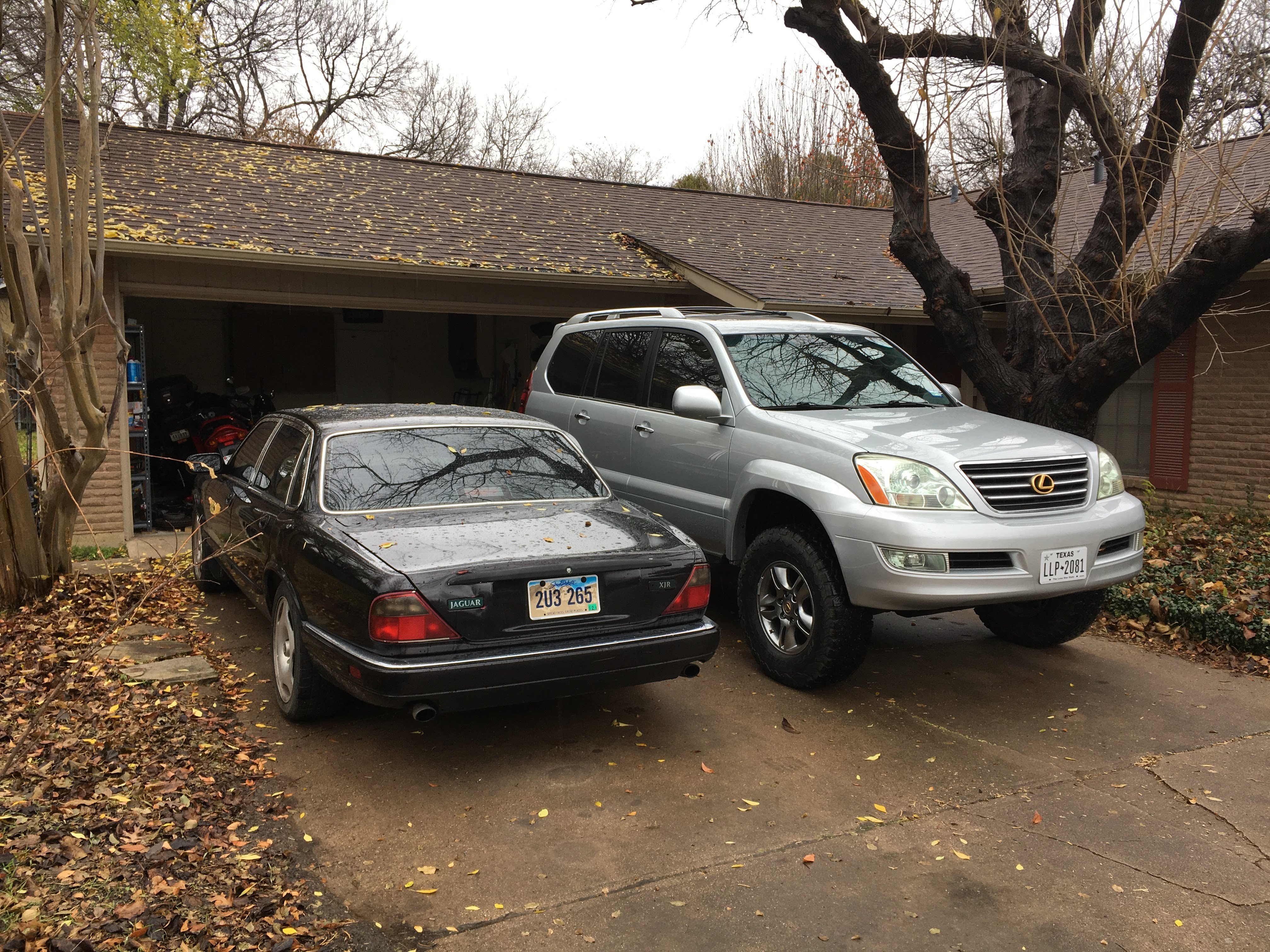 While I didn't get a Sublime Green Challenger, I was able to settle for an obnoxious translucent green key shell 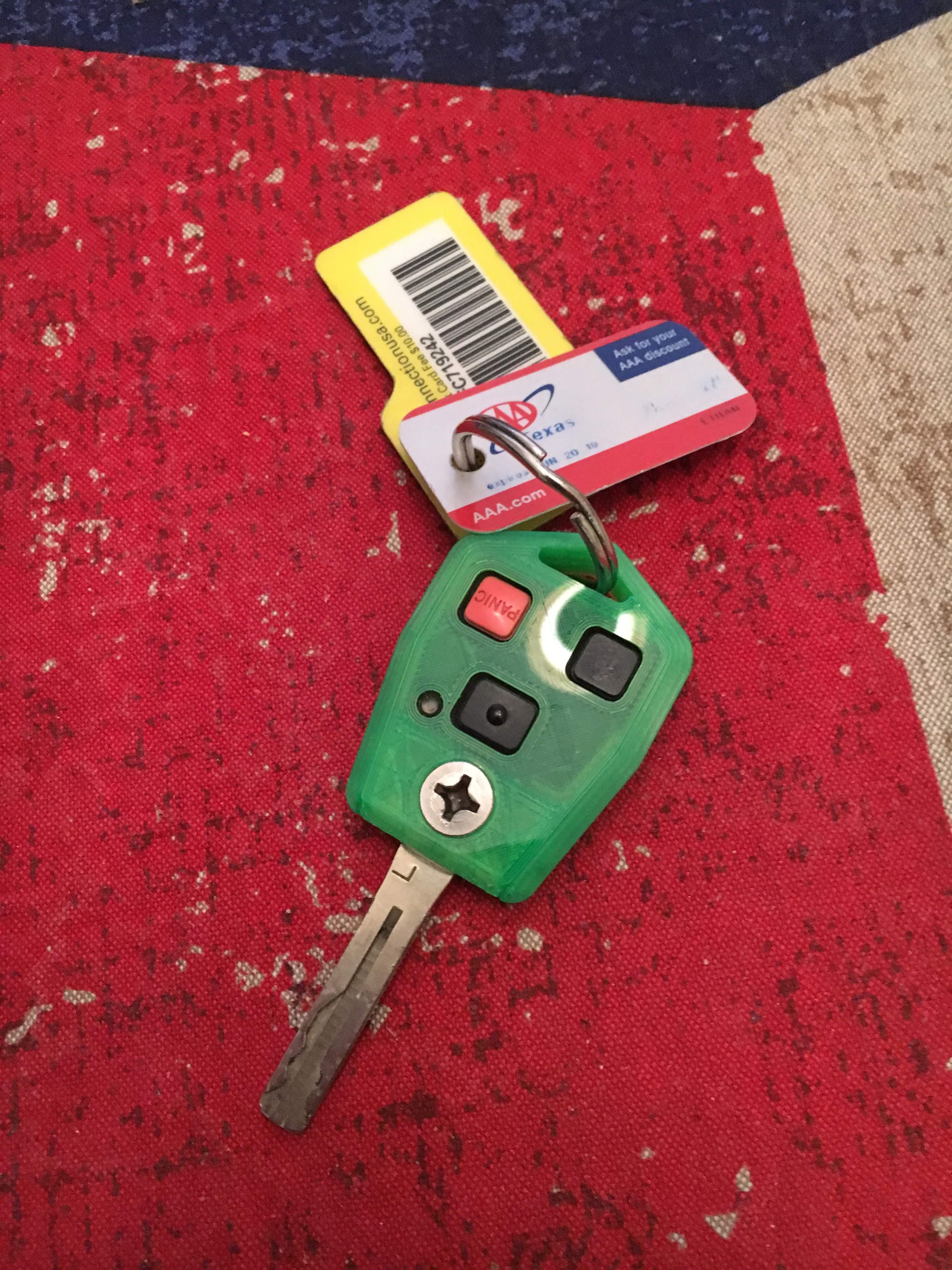 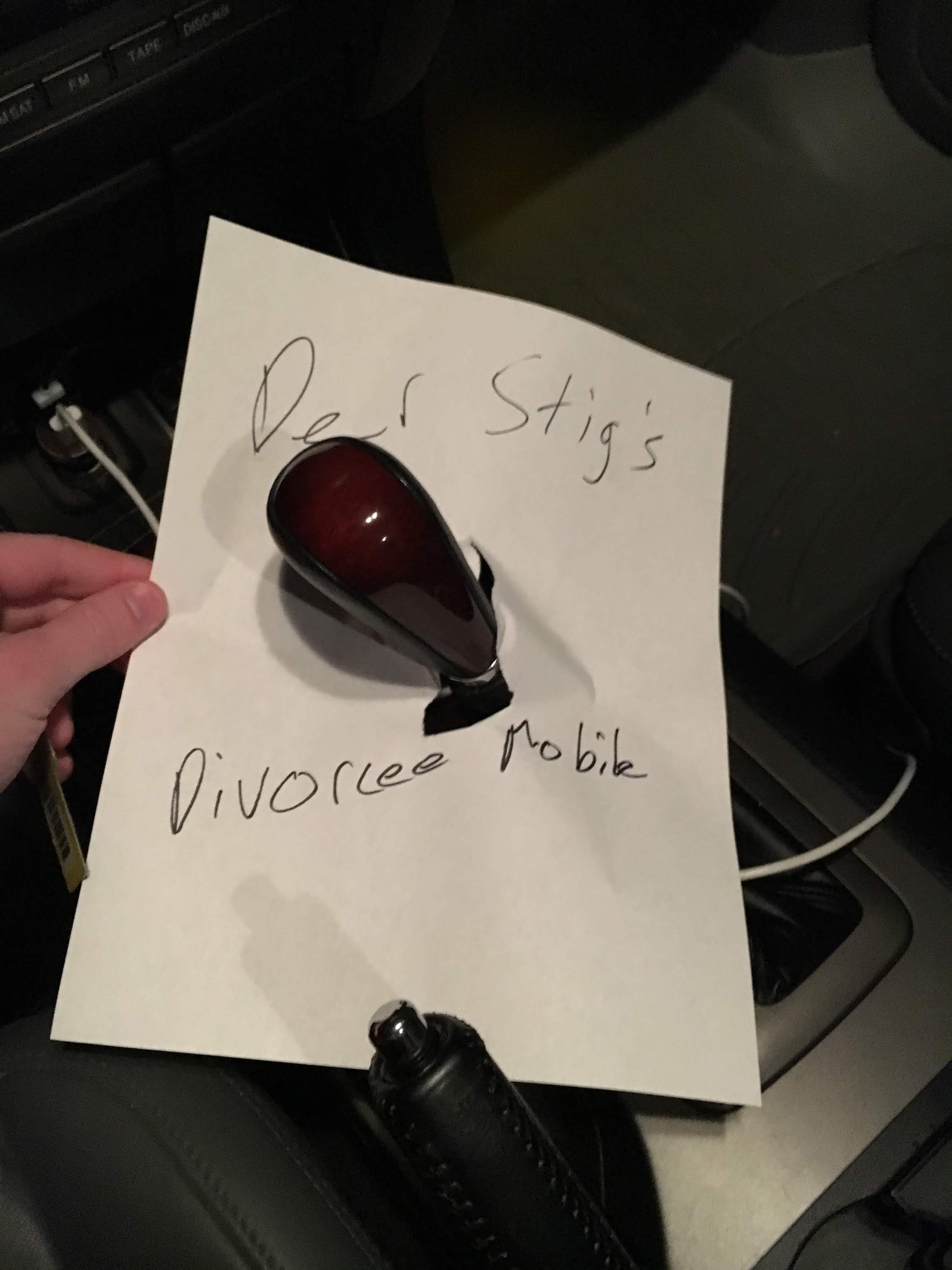 So far, I've performed most of the 105k service by changing the oil, front and rear diff fluid, transfer case fluid, and had the power steering fluid and transmission fluid done by my local dealer.

Three months in and I regret nothing, although it's been interesting getting used to the abysmal fuel economy on 93 octane...about 14 mpg average, 12 city, 17 highway lol. But it's been a great road trip vehicle, daily driver, and hauler of people and stuff. I look forward to doing some wheeling early next month for the first time. 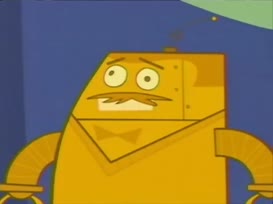 Only took a few months, but @Crazyjeeper and I went on a little outing with his dad to Barnwell Mountain Recreational Area out in Gilmer, TX this past weekend.

And what a blast it was. We mainly stuck to pretty cupcake trails, but I was impressed with how well the GX did. It was unstoppable and climbed everything I tried, considering I only have a center locking diff (for now )

I didn't even get stuck! I know that means I need to try harder

I'm definitely hooked now. Probably going to snapping up a set of rock sliders soon and going to start saving for a 4.10 gear swap plus selectable front and rear lockers.

Some pictures and video from the day: 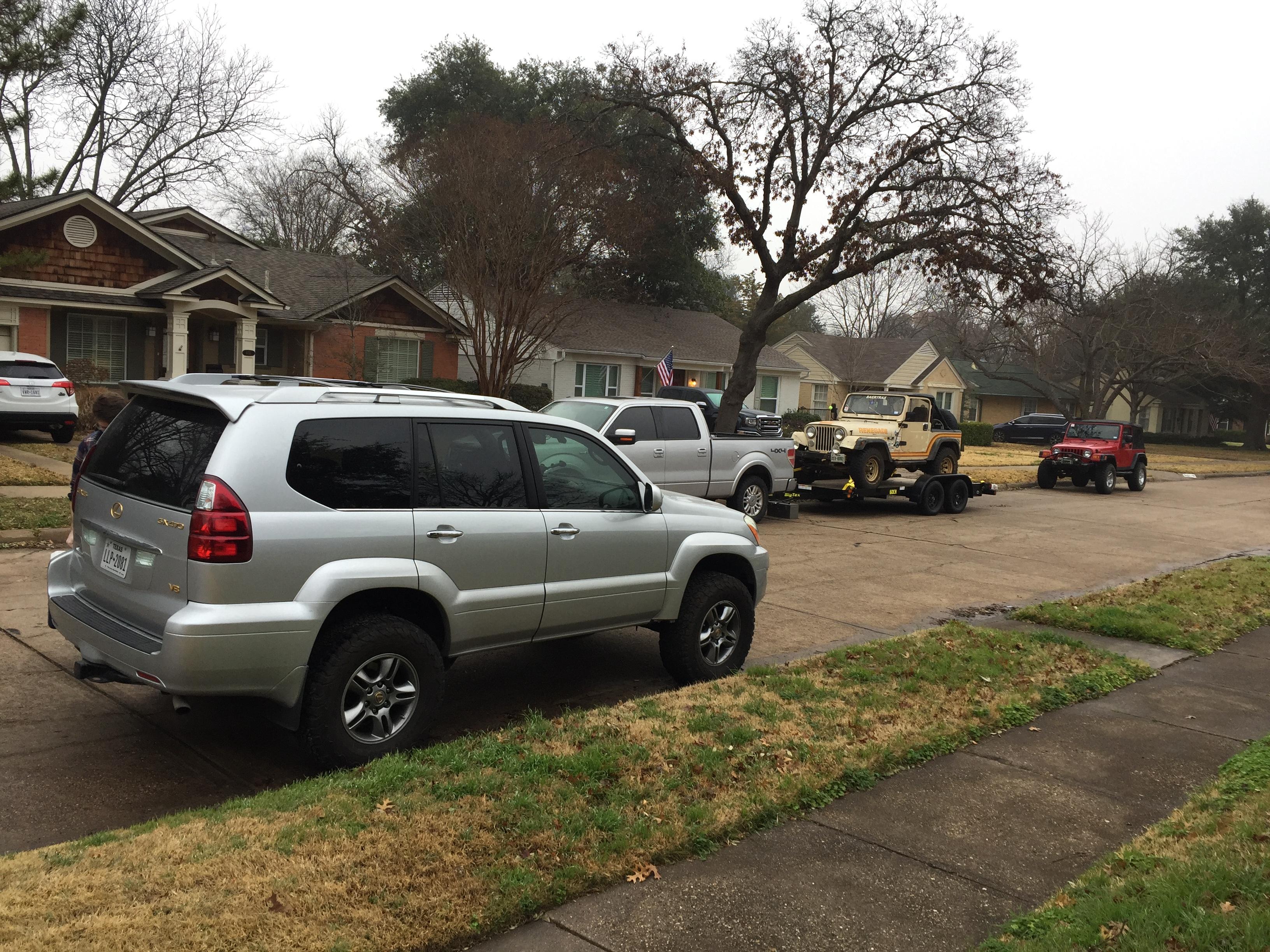 Getting ready to hit the trail: 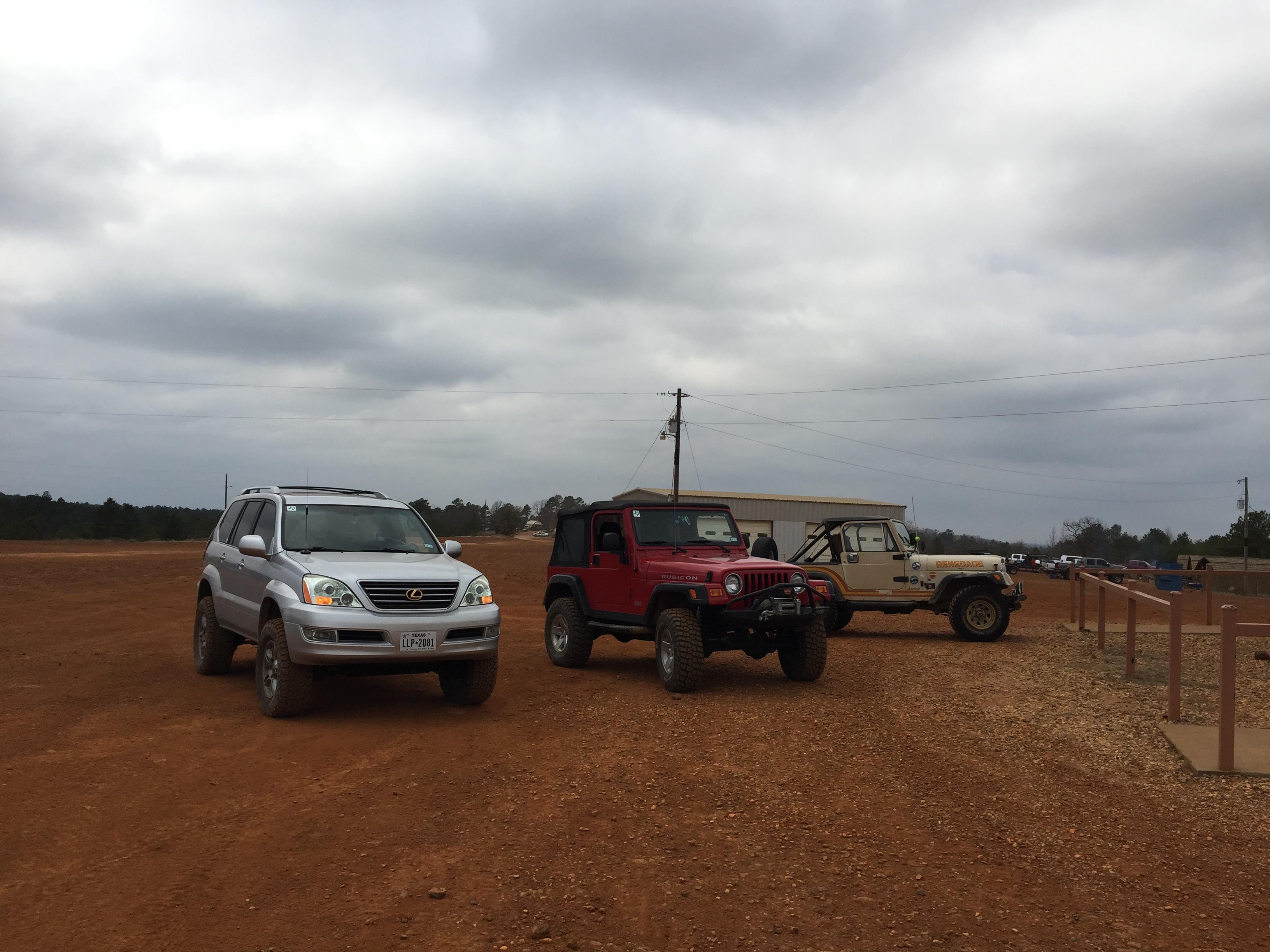 About to get fun: 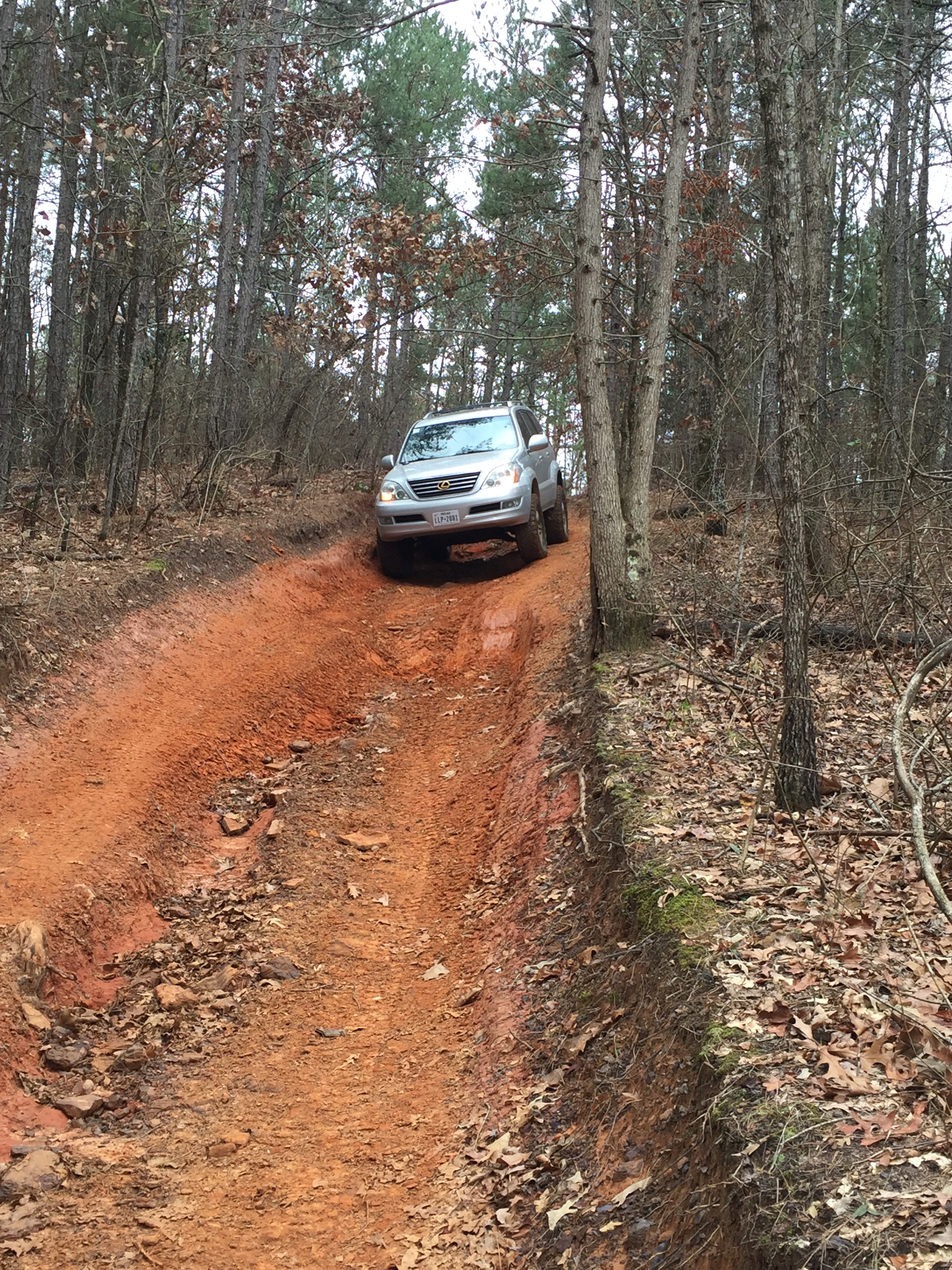 And here's the fun 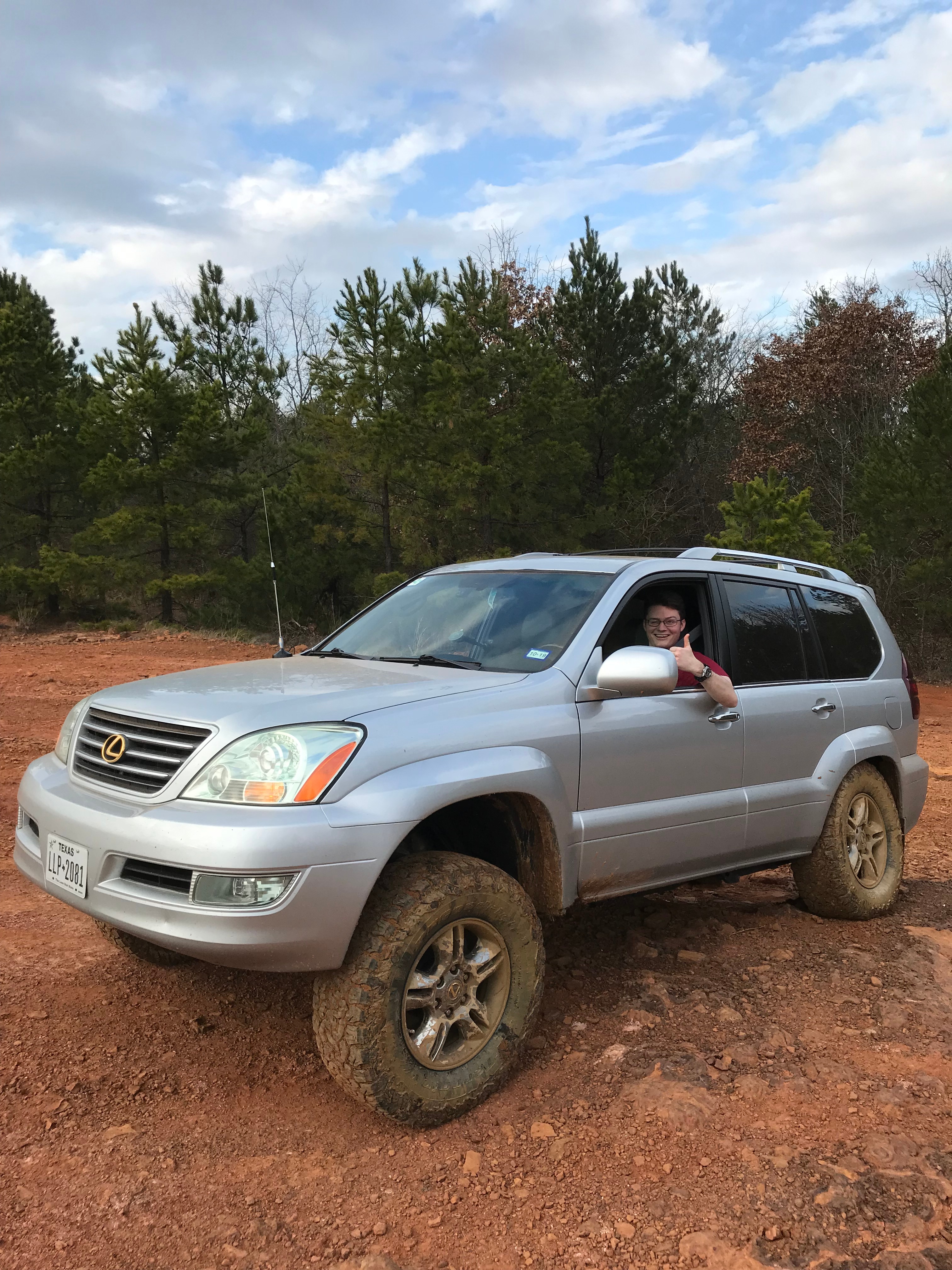 Should have done that with the Genesis before you sold it too...

thomas said:
Should have done that with the Genesis before you sold it too...
Click to expand...

I don’t think it would have survived the trip out of the BMRA parking lot ?

I never posted a pic post-slider-install as it was a huge debacle.

First company sent me ones that they used the wrong jig on, so bolt on wasn’t gonna happen.

Then I bent over and bought some from Slee Offroad. These don’t fit that great either, but we were able to install them at least.

And today, the postman brought me these from Canada.

That's a nice looking slider on the GX, I think it looks much better than a round-tube style.
No trees were killed in the transmission of this message;
but a stupendous number of photons and electrons were terribly inconvenienced.
​

Yeah, it's a clean look. They came with LEDs too for puddle lights, but haven't gotten around to installing those yet.

I like the integrated step pads on the sliders, looks good!

Boxes are always fun, though I'm curious as to what Canadian outfit makes GX parts.

Didn't get everything done on Sunday, probably a little too ambitious thinking we'd get it done.

The boxes contained a DIY rear bumper with tire swing out and skid plate kit. Laser cut steel, 3/16", weld it together. How hard can it be? ?

This was @Crazyjeeper 's second project on the welder and he did a great job. Between his efforts and @Nabster getting rained on with sparks, we managed to make some progress.

At the end of the day, the front skid plate was tacked and mostly set for mounting.

Still have some fitment at the front bracket to sort. The sway bar interferes with the front bash plate, so we're working on a better solution regarding the front mount.

Unfortunately, we also discovered that I have some sort of oil leak, probably passenger side valve cover. Dropped it off at a local specialist today as the starter nearly failed to get me to work today.

This is gonna be an expensive month, and not for fun stuff ?

Sick as, what company did you get the DIY bumper from?

Coastal Offroad - they mainly do Japanese trucks/SUVs. The steel is really nice, but some of the panels have gotten a little warped in delivery. They shipped super fast though.

Cool beans. Steel armour that warped in shipping is pretty surprising, how thick is the steel in those kits?

Edit: Double-swingaway design on the bumper is tight, I really like that.

Der Stig said:
Coastal Offroad - they mainly do Japanese trucks/SUVs. The steel is really nice, but some of the panels have gotten a little warped in delivery. They shipped super fast though.
Click to expand...

I just wish their bumper had a full hoop option. I want more protection over my headlights - maybe I will see if I can get a slicktop one and have someone local do the tube work for a little extra.

Edit- apparently the offer full tubing now! I might have to get one of these to replace that shitty Dosecc bumper. We will see how the next year plays out with Xterra repairs to see if it's worth it.
No trees were killed in the transmission of this message;
but a stupendous number of photons and electrons were terribly inconvenienced.
​

I like the look of their bumpers, but I'm an ARB fanboy. Been asking my shop for one since December and I'm still waiting. Apparently none of their distributors have them.

Shit, that's probably faster than they'd get it to me.

BerserkerCatSplat said:
Shit, that's probably faster than they'd get it to me.
Click to expand...

Shipping wasn’t cheap hah. About $300US.
Now waiting to hear back from the indy shop about the $$$$ damage. Fortunately, they had a loaner Corolla so I don’t have take the Boxster if we actually get snow and ice this week.