Someone Else's Problem: Die Barge von Barking: 2000 Audi S6, or: Can't hear you, my exhausts are so loud!

Well, all this happend very sudden: Until a few days ago my plan was to happily drive the Audi 4.2 A6 into the ground until the gearbox/transmission would go out with a big bang or until the MFK (swiss version of MOT) would run out in early 2017. But to be ready for that moment I already went on Autoscout regularly to look out for some other barges with some power, automatic, AWD, new MOT, fresh off service and (most important) in wagon form.

Last Thursday I found an offer (only one day old) for the Audi S6 this post is all about. "Hm, something like this will be the perfect replacement example for the A6 when it goes boom someday", I tought.
But only the next day I said to myself: "Why wait? You want an Audi S6. Get that S6". And so I simply called the garage to ask if they would consider to trade in my A6. "No problem", was the answer. Perfect. Let's do this. And so here we are: 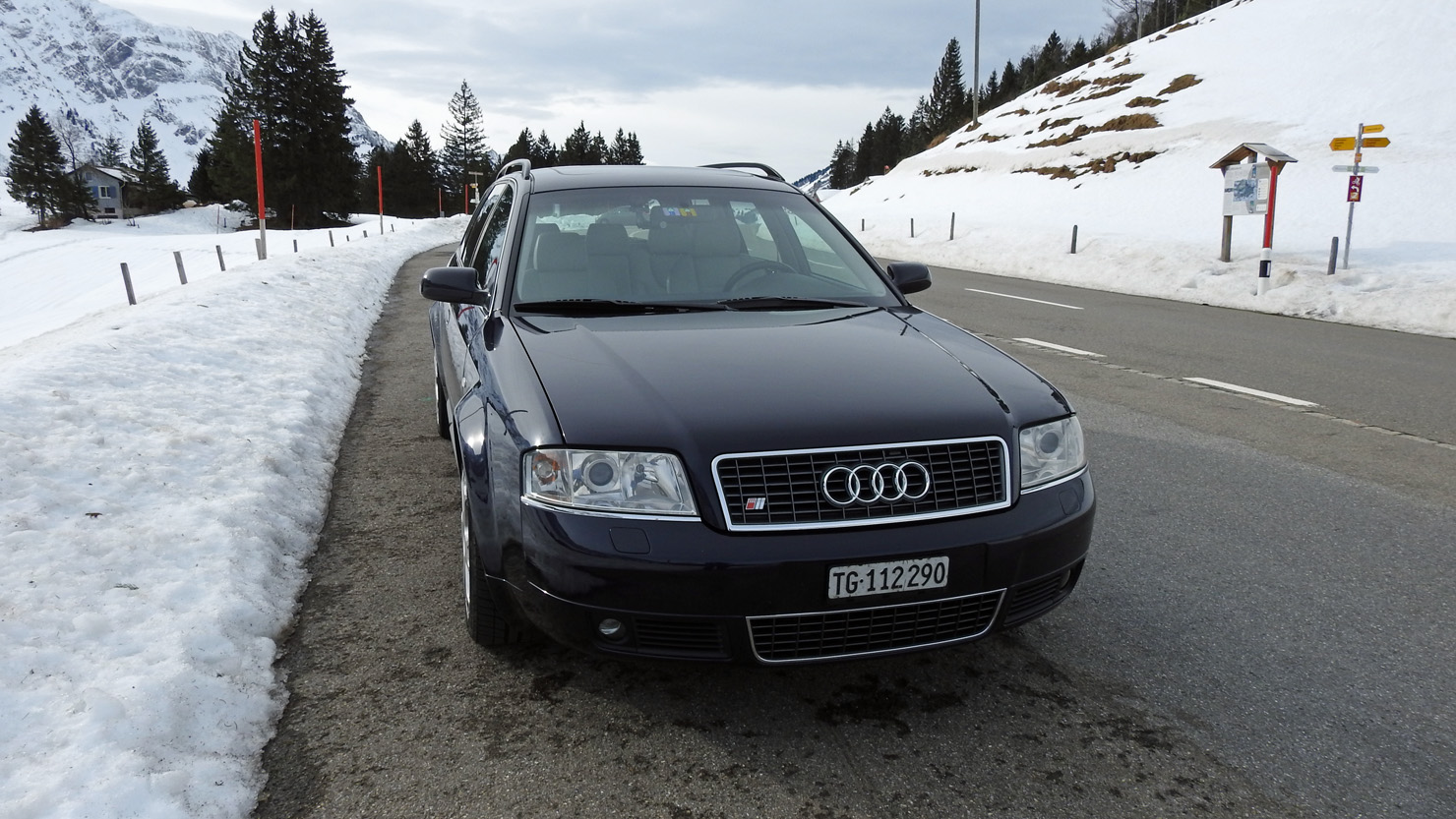 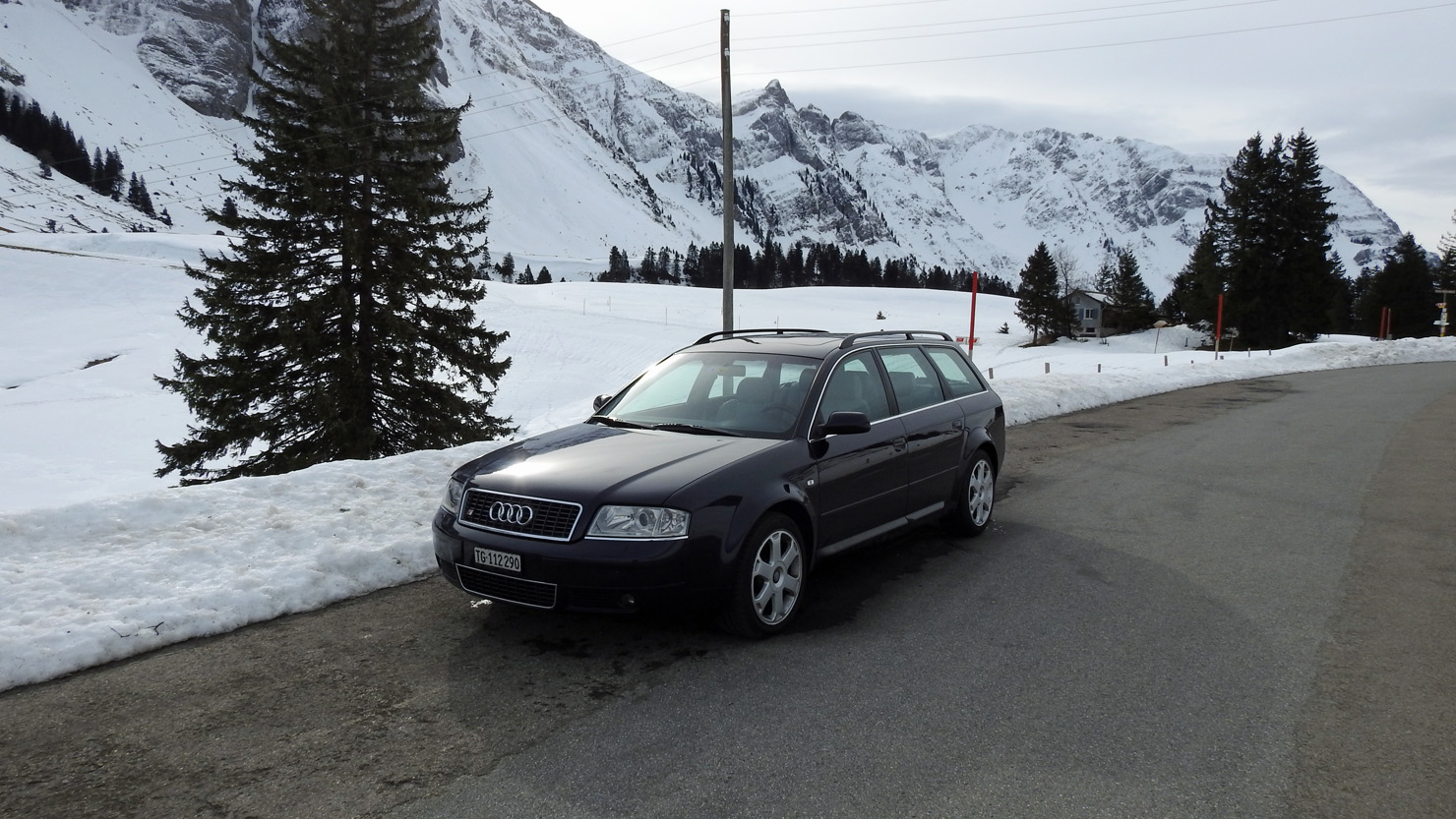 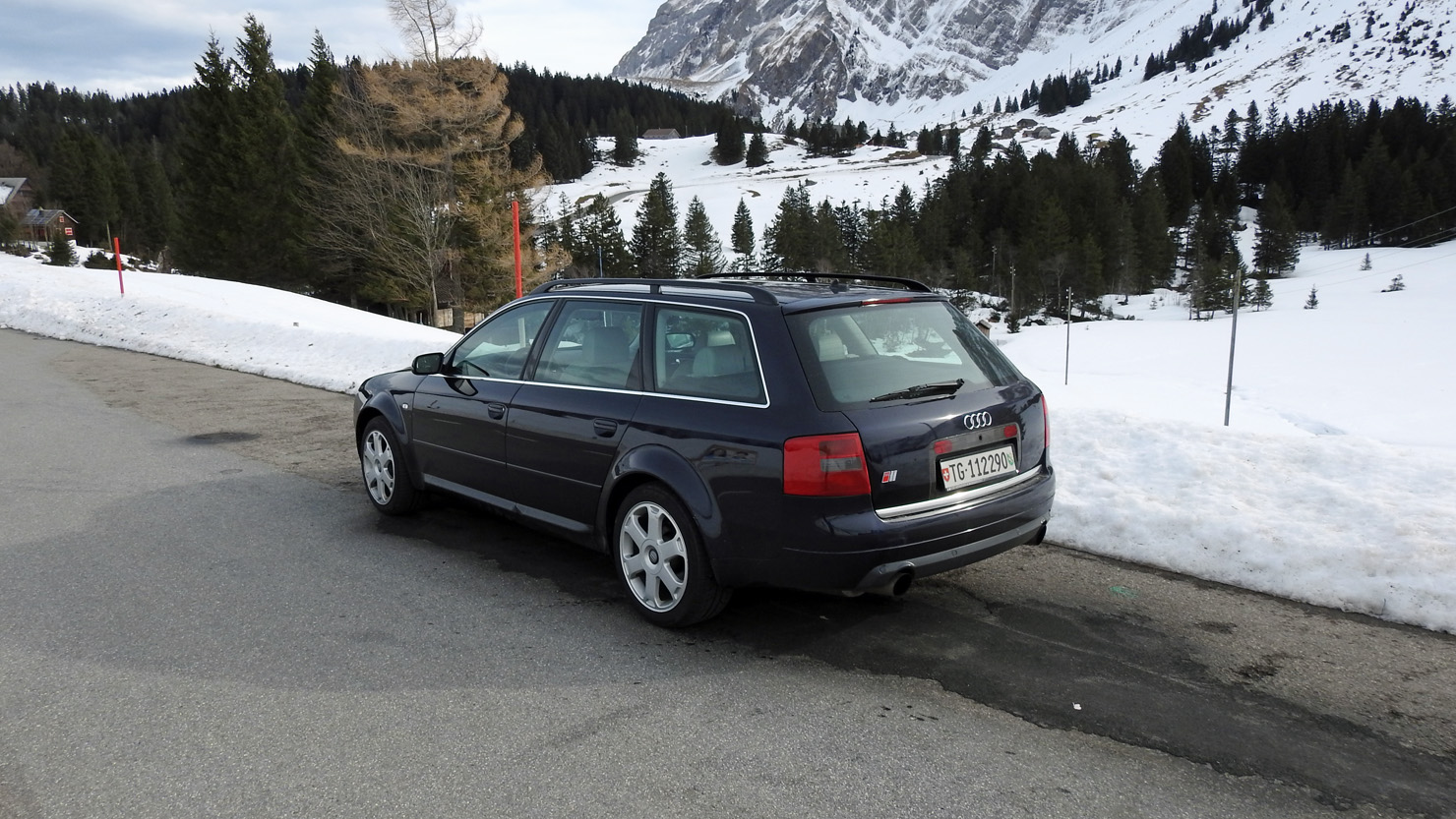 The key scratch. Only visible up close and in certain light, and only on the hood, on all the other panels it has has been painted over. 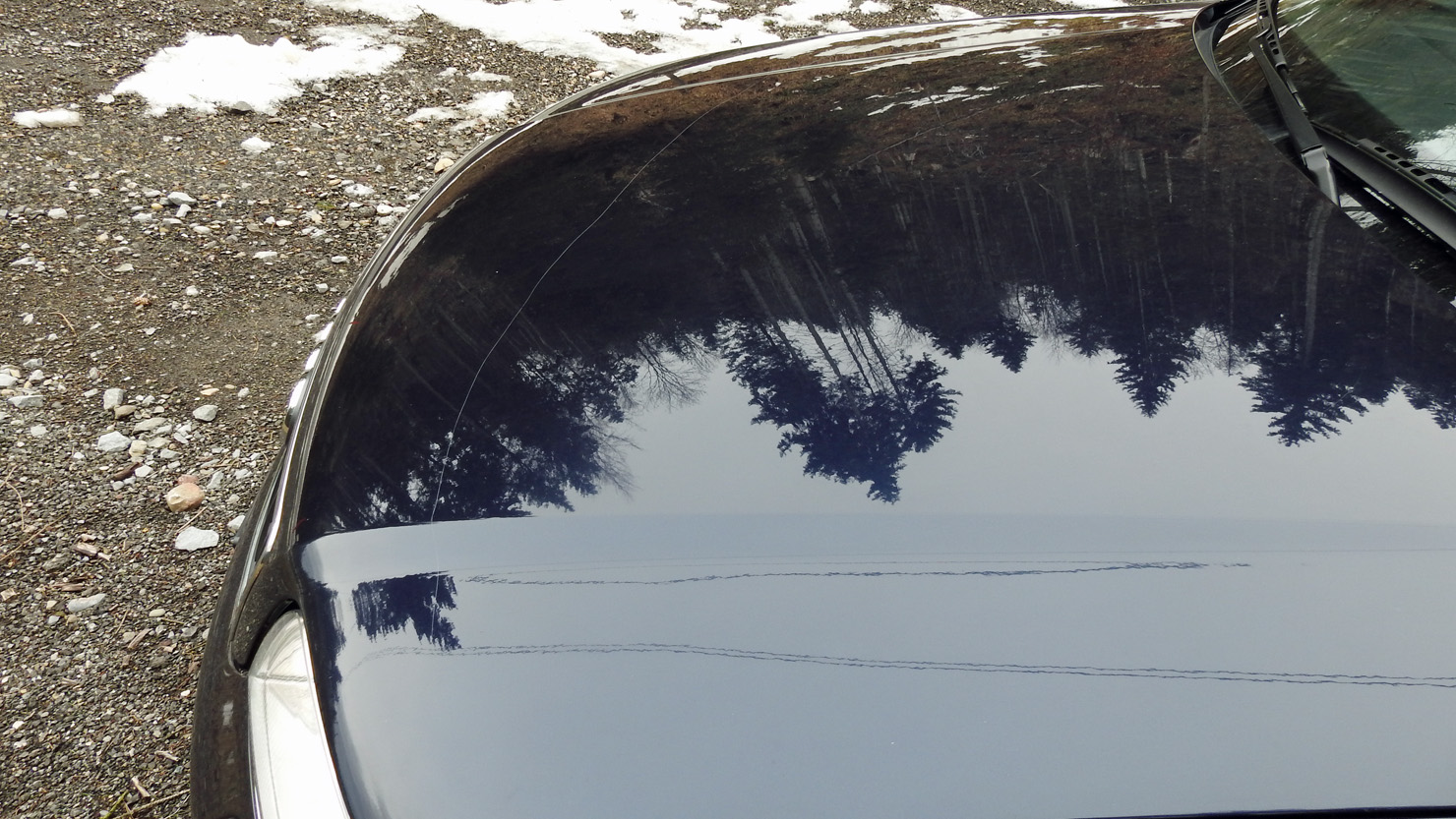 Come on, I know that 300 is here for bragging but it makes the dial stupidly hard to read during glances at normal day speeds: 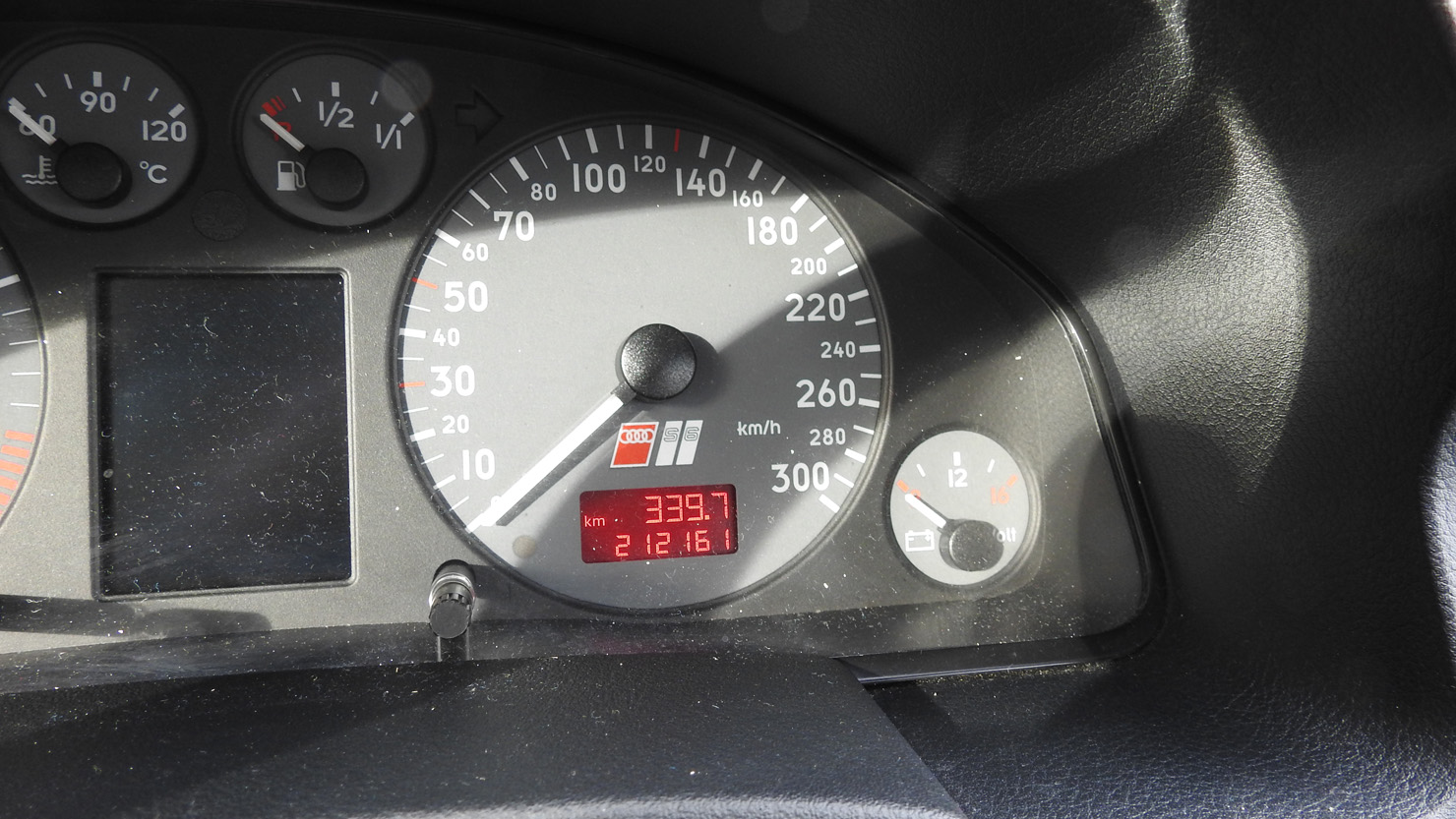 You know by now I bought this car because it has more power than the A6 and mostly because it's an Avant... but feck all that, because just after one day of ownership the all defining features are now these hilarious things: 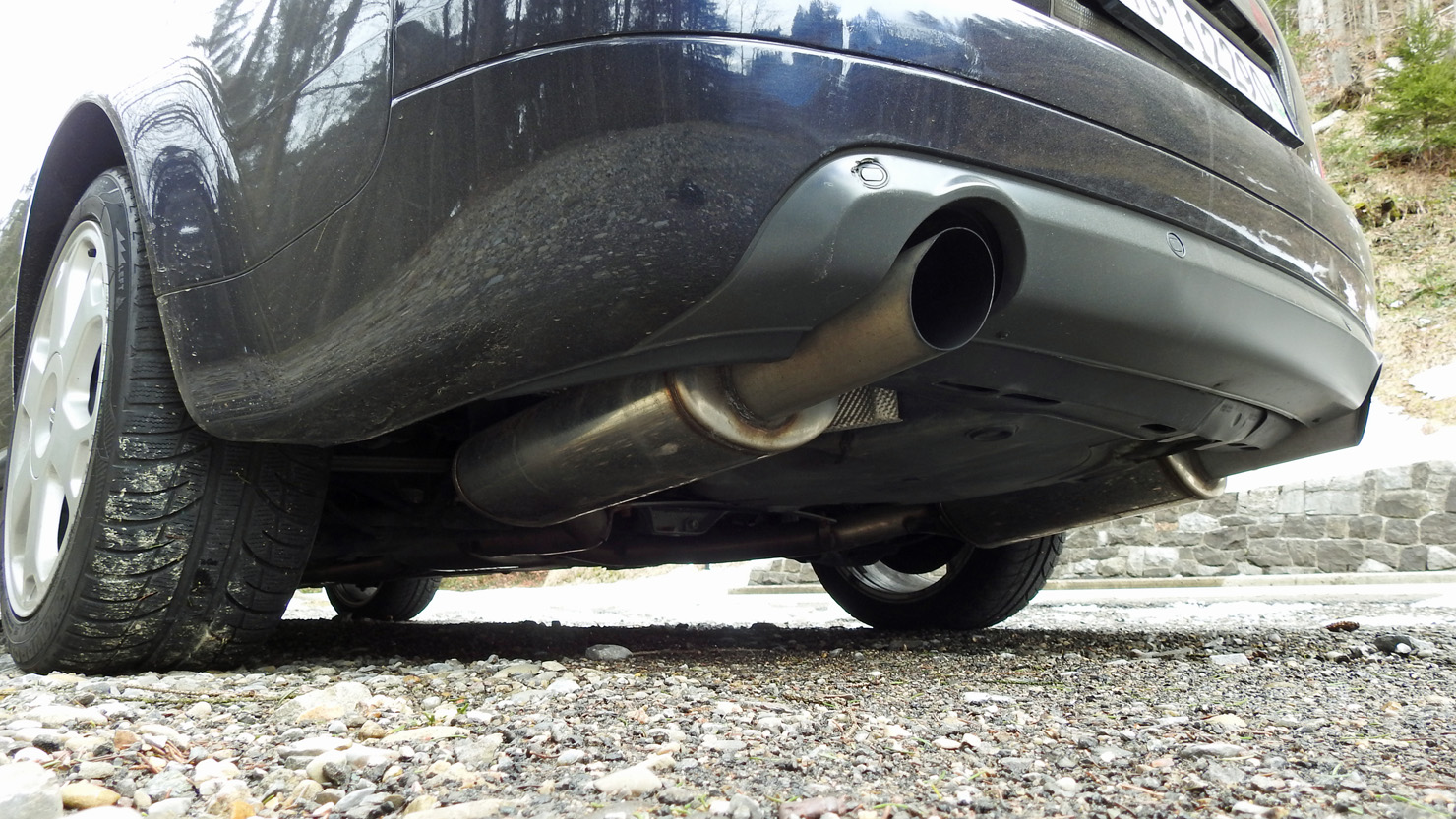 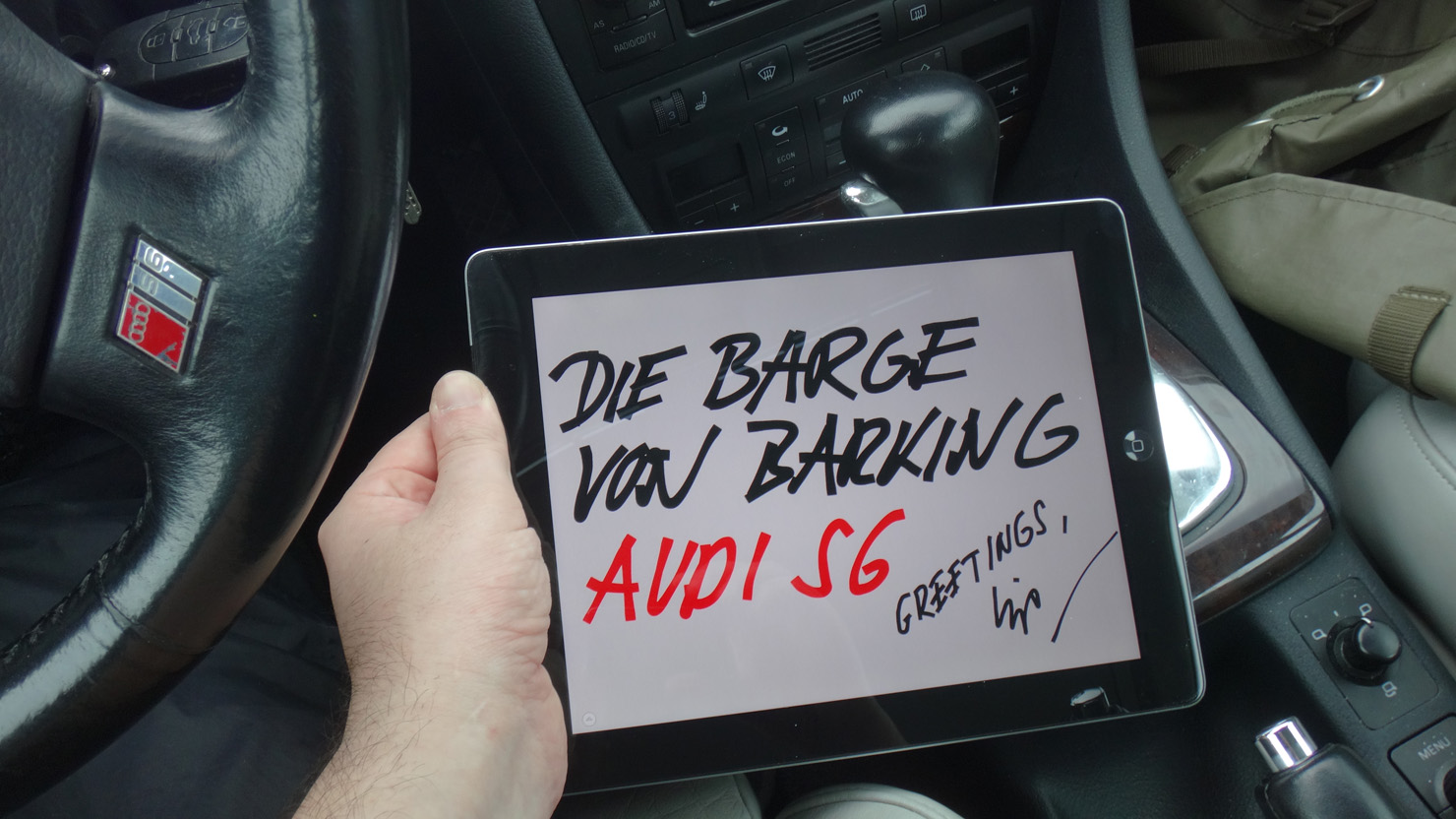 Oh and btw: You have to turn your volume full up because the dashcam mic is rubbish, but I hope you will get the gist anyway by that massive echo at 0:06 why the word "Barking" is in the thread title. :lol:

Outlook:
As usual the goal is to drive this for about two years and 70'000km... But let's not kidd ourselfs, as the ownership of the A6 has shown, realistically it will be about a year...
Last edited: Feb 9, 2016

Very nice.... I'm super jealous!
"Well, that's fine. You waste your money on a Mustang or a Ferrari. The fact is that if you want a sports car, the MX-5 is perfect. Nothing on the road will give you better value. Nothing will give you so much fun. The only reason I'm giving it five stars is because I can't give it 14."
--Jeremy Clarkson on the NC MX-5

Props for staying with a beige interior

Congrats lip. Good car that is.

You are undergoing quite the evolution in your choice of cars. Nice one.

Bring it to Italy in August so I can have a play then get hangry in it?
WillDAQ: To use the technical terms: "the Mustang is to aerodynamics what horse shit is to fine dining"

MWF said:
Bring it to Italy in August so I can have a play then get hangry in it?
Click to expand...

Or you can come to Italy at the end of this month and you can play all day long with it while I'm on the piste!

Btw, should I finally post that video of you being "hangry" in my car during last years roadtrip? Granted, I was egging you on, but still. Like a sailor. :lol:

I would be all over the slopes but starting a new job just this week put the skids under my Alpine adventures for this year. I will be there next year come hell or high water.
WillDAQ: To use the technical terms: "the Mustang is to aerodynamics what horse shit is to fine dining"

Nice! Have a lot of happy kilometres!

MWF said:
I would be all over the slopes but starting a new job just this week put the skids under my Alpine adventures for this year. I will be there next year come hell or high water.
Click to expand...

No problem. Some day it will happen.

WHAT?! Rumbling around in another Audi V8 at these economical times? How unethical. I'm extremly offended over such an irresponsible level of fast waftage. - Personally offended from my nose to my toes! - What's your goal, to be as comfy as possible and listening to your V8 bark while you burn all the poor fossils?! Shame on you again!
...
Wait a minute...
...
Actually most of this doesn't apply to my V8 now I've changed it to suit the S6. :lol:

If you cut those exhausts off send them to me, I want that sound.
Last edited: Feb 9, 2016

If I cut those exhaust off I will send them to you. Promise. Thehe.

Can you fold the rear seats in those? Is it AWD?

Seriously: These BMW's are awesome cars. Damn good looking. And they are cheap to have.

But try to reach a Swiss ski resort during heavy snowfall in one of these... :lol:
Last edited: Feb 9, 2016

Closest you'll get is a ski-passthrough in the center armrest area.

Most excellent Avant. Now get some electric cut outs dumping behind the headers for maximum loud

Grats on the same car, with enourmous plumming devices on teh back!

That thing is maybe still size of a shopper hatchback, but it sounds properly Barrrrrrrrging

Matt2000 said:
If you cut those exhausts off send them to me, I want that sound.
Click to expand...

You can get the same effect changing your rear glasspacks onto casual aftermarket flamebusters. (basically what all ricers do)

...and that wasn't a suggestion, sir, you have a week.