Other than cars one of my other interests is vintage audio equipment.

I built this current space over the last two years tried to go mostly 1970s vibes, but a few components are later than that. I just love all this old analogue gear and I enjoy keeping it all running.

Components of my setup from left to right... 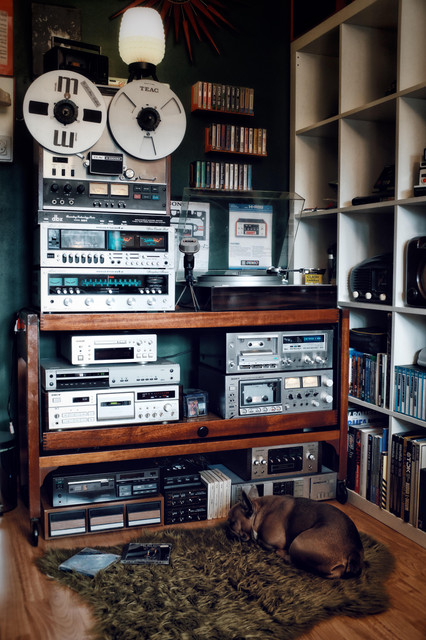 My Desk space also has a 1983 B&O Beocenter 2200 Music Centre, which I use as a secondary system. I also collect Military and a few years back use to be in an 82nd Airborne 5050th WWII era re-enactment group. Just became a very expensive hobby to pursuit. The picture above the monitor is my great granddad during his time in the African Theatre in World War One. 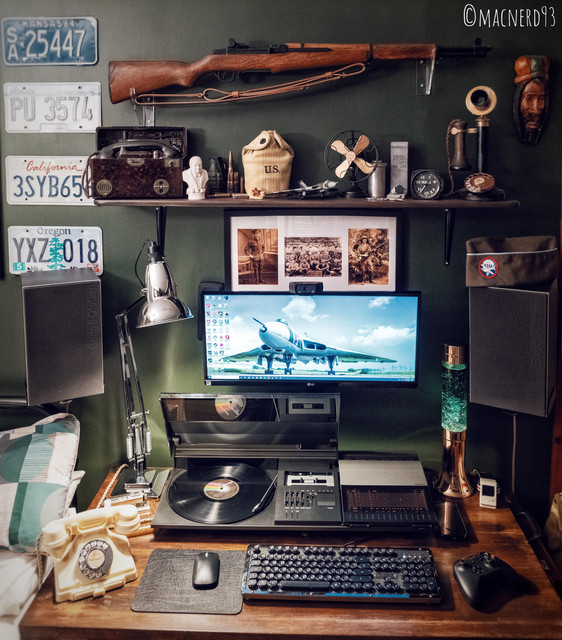 but i would just stare at it while my mp3s are playing though
Click to expand...

The reel to reel & Elcaset machine have fantastic sound tbh. Even my Sony ES cassette deck under the little Teac Minidisc is an excellent performer. I had it playing all my music at our Christmas party and no one could tell it was a Cassette tape. A bit of a video demo of the Sony from a few months back.

I do have a MiniDisc recorder in my rack, that's the most extravagant I get... well, the combined CD/MD car stereo is stranger, but it's stored away in a box.

yeah I enjoy old HiFi equipment but canot justify some of it as I don’t see a use case for it. TechMoan’s YouTube channel helps in that case. That said, I do have a Pioneer SX780 and Pioneer PL300 record player.

yeah I enjoy old HiFi equipment but canot justify some of it as I don’t see a use case for it. TechMoan’s YouTube channel helps in that case. That said, I do have a Pioneer SX780 and Pioneer PL300 record player.
Click to expand...

I have a bit of thing where I have to own stuff and try it out for myself lol. I did model my setup on some of Techmoan's though. Elcaset being the best most obscure format I discovered through him I think.

Hah! I saw your post on r/MacSetups a while back. Great kit.

I need to update my photos of my setups, but I've got a lovely $2 garage sale find Sansui Model 2000 (that @Nabster helped clean up) powering a pair of ADS L690s in my office.

Bedroom setup is a set of ridiculous Polk towers on loan from a friend paired with a Technics 5370.

And the garage has a set of B&Os courtesy of @Nabster and some newer Sony amp with Bluetoot.

My living room setup is the best of the lot though, a pair Infinity RSb with some newer Emotiva gear.

*waits for @Crazyjeeper to out gear whore me*

I like vintage gear, but my amp just kept having problems. It's in storage right now and I'm using my amp from the late 80s or early 90s (?) and it's been solid. Plus is has the cool visualizer in LED on the front panel.

I will grab a photo when I get home tonight.
No trees were killed in the transmission of this message;
but a stupendous number of photons and electrons were terribly inconvenienced.
​

Very nice kit there, Thriller on cassette sounds superb. My first thought was Techmoan's setup and I'd certainly be getting hold of some of these if I had the space and cash, currently only running an Aiwa turntable and TEAC speakers from the late 90s as they were remnants of discarded systems my family had.

I quite fancy getting my hands on a complete Akai M5 system though as they're relatively compact and I love the look.

I love everything vintage, and all my HIFI is vintage. Not a big HIFI nerd though, so I just have what I "need".

In the living room I have Dahlquist DQ 10 speakers, love everything about them, the sound and the look!
With the DQ10's I use a Nad 3020 amp, Nad 5440 cd player and a Technics SL QX200 record player, I also connected a bluetooth receiver for spotify streaming. 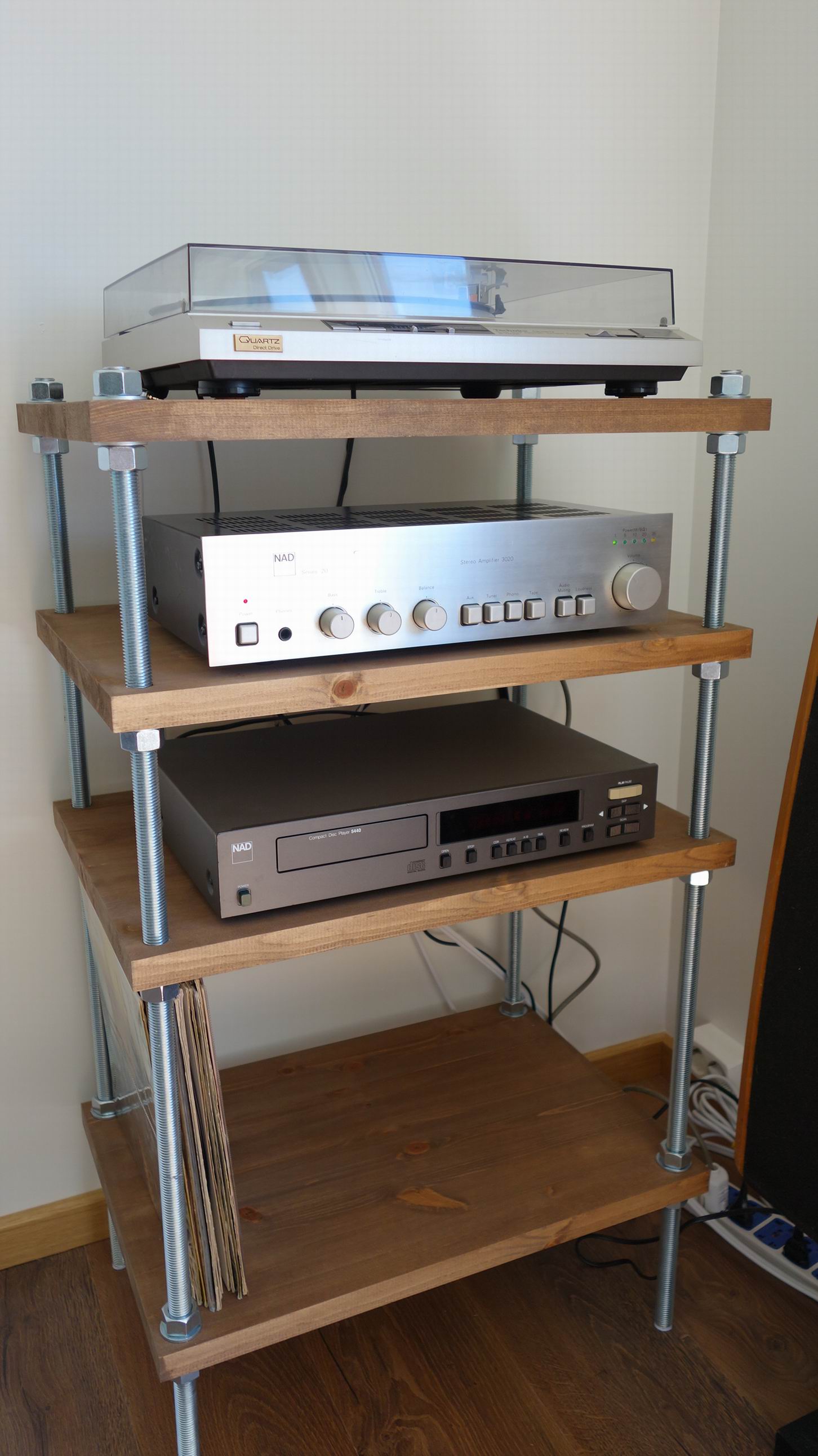 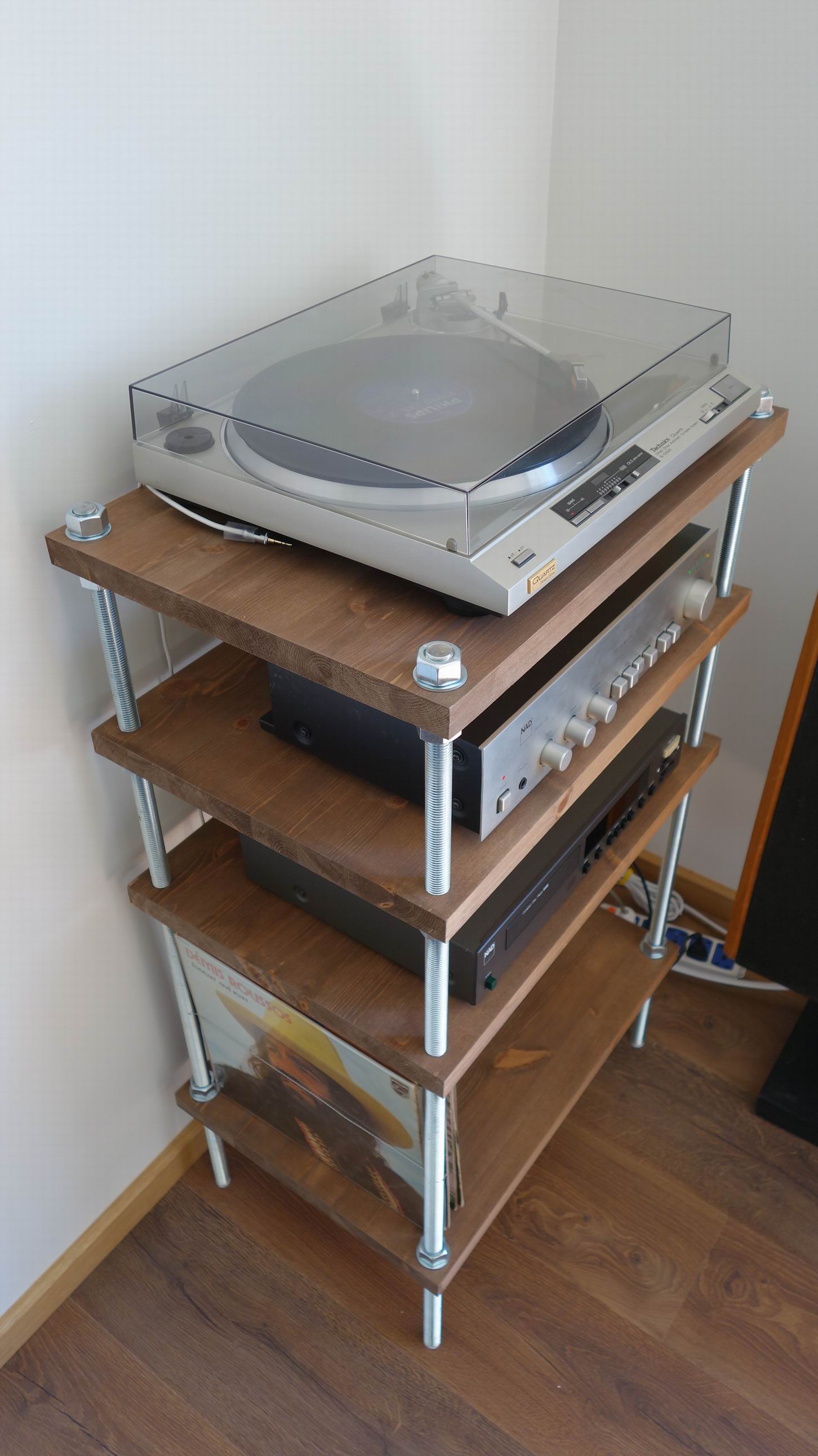 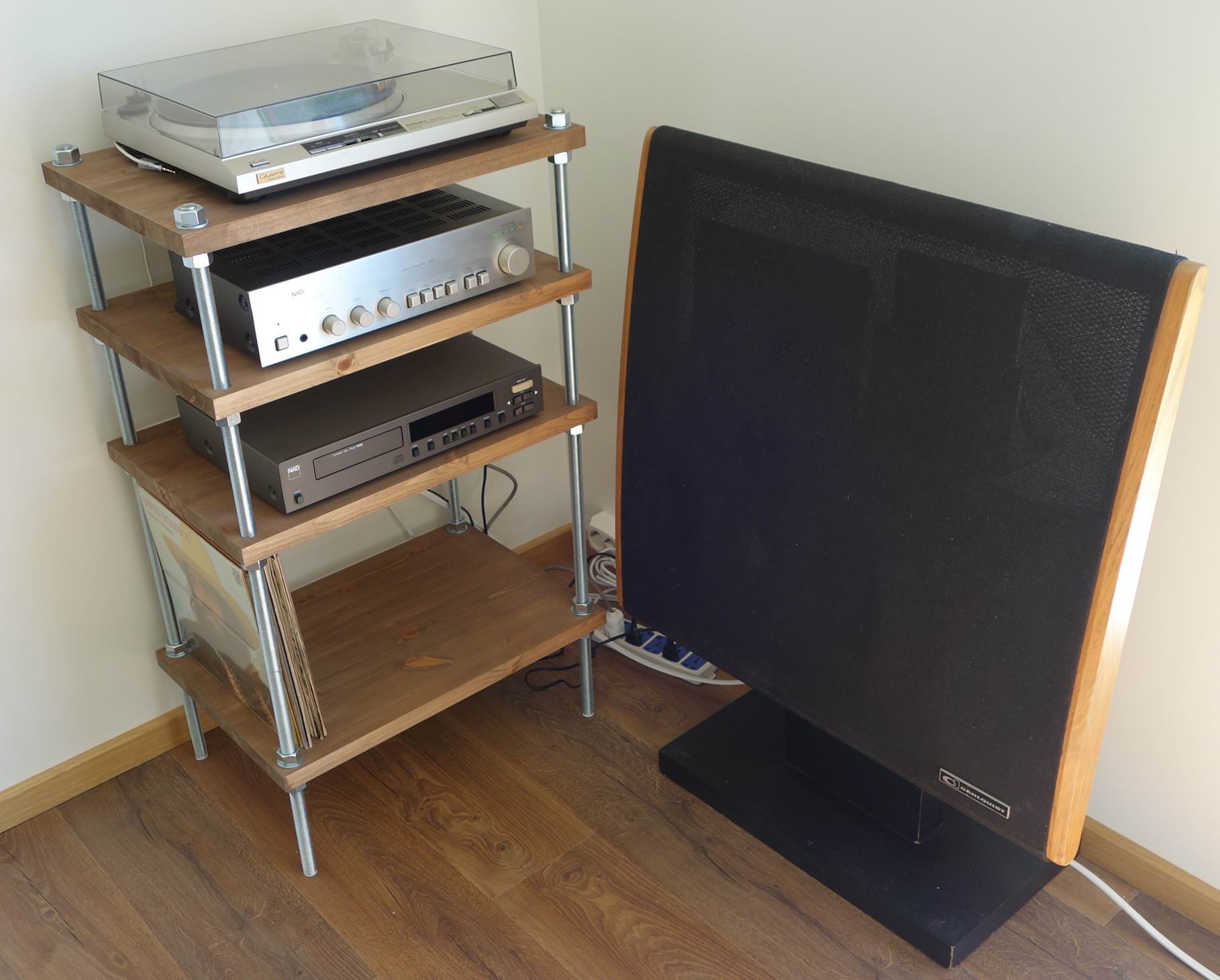 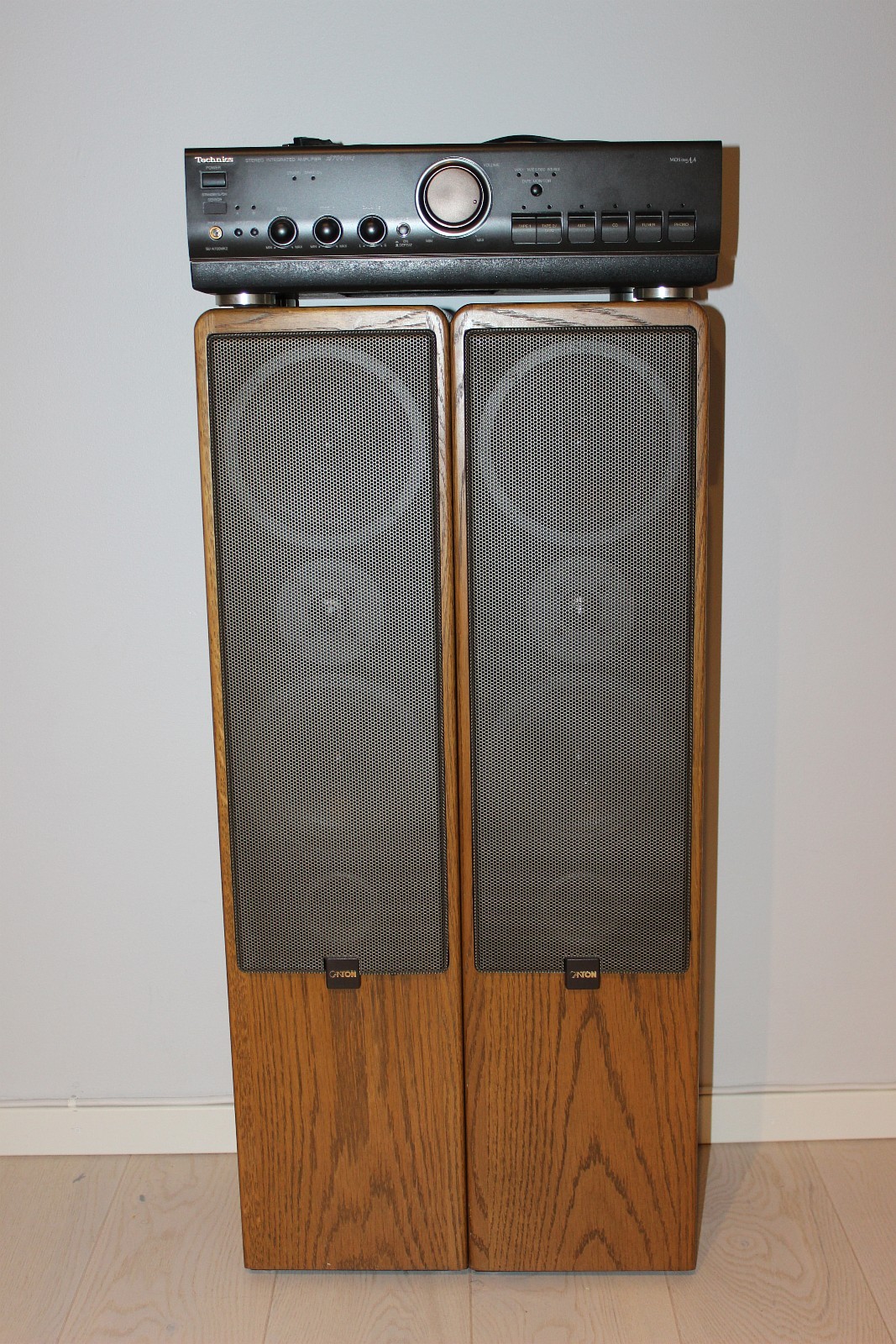 In the office I have a Sansui 5050 FM/AM stereo receiver with a Radionette Soundmaster 40 cassette player and a bleutooth receiver and speakers I don't remember the make of, but from the 70s.

I knew vintage pickups and amps were a thing, but i had nu idea cassette players were still used by anyone

Some albums (even mainstream stuff like Bill Callahan's new LP) only get released as download, LP and Cassette these days, with CD not being an option any more.
Battered and weary after the craziness of the 1960s, the self-righteousness of the 1970s and the greed of the 1980s, I want to go home again, oh, so desperately - home to that land of drive-in restaurants and Chevy Bel-Airs, making out and rock 'n' roll and drag races and Studebakers, Elvis and James Dean and black leather jackets. Not that I ever owned a black leather jacket.
(Roger Ebert)

In terms of vintage equipment, I got a Thorens TD-126 MK III that I bought for 20 Euros and rebuilt with a friend, using an Ortophon 2m Blue pickup. Amp is a current-model Marantz with all digital bells and whistles, though. 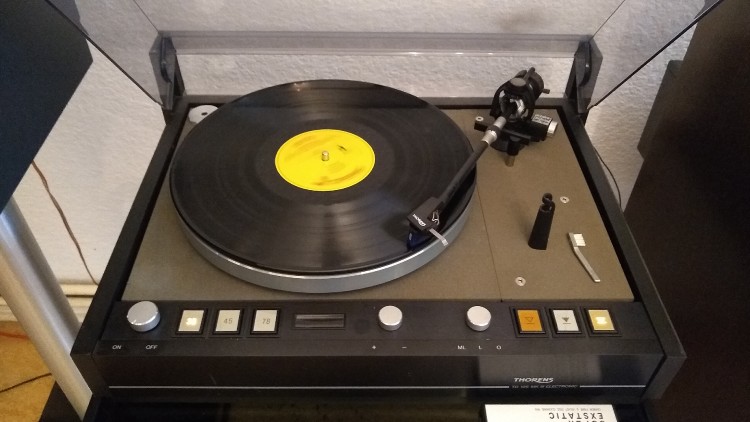 bone said:
I knew vintage pickups and amps were a thing, but i had nu idea cassette players were still used by anyone
Click to expand...

Not as vintage, or as high end as many here; but it still works great.

I love old hi-fi gear. I've had quite a few various pieces of it over the years but I've settled into most of the current setup for some time now.

Starting in my office/studio room I have this little rig.

Moving into my drum room/kitchen

And lastly, the big setup in the living room.

There are two separate speaker systems.

For TV and other light use I have a pair of Infinity Primus P163 speakers nestled in the bookcases plus a Polk PSW-10 sub.

The crown jewels are the 1981 Infinity RSII speakers. I recently picked them up and they have blown my mind. I've never heard anything bring so much space and air into recordings.

The blu-ray player and the Yamaha RX-V377 push the bookshelf speakers.

Not pictured is my garage setup which consists of the rest of the Yamaha components I pillaged the cassette deck from and some random 90s/2000s Technics and Sony speakers. I also have a little Emotiva MiniX A-100 powering some little 2 way custom speakers my dad had made in the early 80s for my computer.

You could say I like music, just a little bit.

Main floor I use my Pioneer receiver with some ADS speakers bluetoothed audio from the TV or phone is generally how I listen to music on the main floor while making dinner or watching youtube via the tv app.

Garage isn't vintage so to speak unless you count a 2000s sony car stereo powered by a corsair power supply vintage.

Basement is where the magic happens as that has an Onkyo 5.1 surround sound receiver with Dayton Audio ribbon driver speakers and a big fuck you 18" sub once used for small concerts.

I love the look of old gear but if I don't have a use case for it, I don't hang on to it which saddens me as I get into fits of frustration that I have things I can't/don't use and it must go away.

I was just thinking, “let’s see how many posts it takes before Techmoan is mentioned” ?

Oh dear, I've started looking at vintage Sony gear on eBay. I quite like the idea of building this little setup from the early 80s.

Partly because it looks great, partly because it's Sony and therefore should be good quality and partly because when it's fully built it will fit in the space where my amp and turntable currently sit. A German seller has them all listed separately on there, I'd like to start with the tape deck at least as I don't have one at all. This one (TC-V7) has a sliding drawer for the cassette, which I love. It apparently needs new belts, I'm sure I'm capable of doing that.

This is the auction for the deck:

These are for the other components:

Don't tell me I'm mad, I already know that. My current amp and turntable are perfectly fine, I just fancy some vintage Sony stuff. I also fancy stuff from the Akai M5 range due to the cool displays...

You are mad. There's far better audio equipment for sale than Sony. Sure you may assemble a set up that doesn't look the same but the sound will be far superior.

If you remember a FG member called The Interceptor he writes for a German hifi mag. Might be worth a PM to him for advice. Assuming he picks up the message.
WillDAQ: To use the technical terms: "the Mustang is to aerodynamics what horse shit is to fine dining"