Viper007Bond said:
This is what I do. I engine brake and then clutch in and regular brake. No sense in wearing out the clutch by shifting for no reason.
Click to expand...

Anyhow, I'm of the narf camp. Keep the revs above the cut off point, and allow for emergency maneuvering if needed.
Last edited: Mar 30, 2016
bogative ?​

And now for a serious answer, when driving in a manual, I tend to coast in gear when doing normal driving and with lots of room left to slow down. When I'm driving more actively, there's hills involved and / or I have less than ideal space for slowing down, I tend to downshift through the gears. Never will I coast in neutral.
Goodbye...
R.I.P.
...Aaaand it's gone

prizrak said:
I keep it in w/e gear I was right up till the moment when RPMs are about to drop too low then neutral it. It's technically worse on fuel than going through the gears but I'm too lazy.
Click to expand...

Is that right though? I've heard many modern manual cars will cut fuel to the injectors when coasting in gear...

TC said:
Is that right though? I've heard many modern manual cars will cut fuel to the injectors when coasting in gear...

That's why I do the same thing, coast in gear until the revs drop close to 1k or so.
Click to expand...

Being in neutral is worse on fuel because the engine has to tick over rather than being dragged along by the car's kinetic energy... and it's better on fuel because you will coast further, as long as you actually need that coasting distance instead of wasting kinetic energy into warm brakes.
Which effect wins depends on the situation... I'd say the higher your speed and the further you can coast, the better to free-wheel it. As soon as you touch the brakes it'd have been better to drag the engine along to avoid that tick-over fuel.

It's why some modern DSGs actually go into neutral when coasting rather than dragging along the engine at high revs, and re-engage some gear if you slightly prod the brakes to utilize engine braking. Current iterations also shut off the engine before fully coming to a stop. Near-future iterations will also shut off the engine at higher speeds, grabbing some hybrid-car-advantages without actually lugging a hybrid's large battery around.

Here's an older one keeping the engine running (spot "Freilauf" in the display, German for free-wheeling): 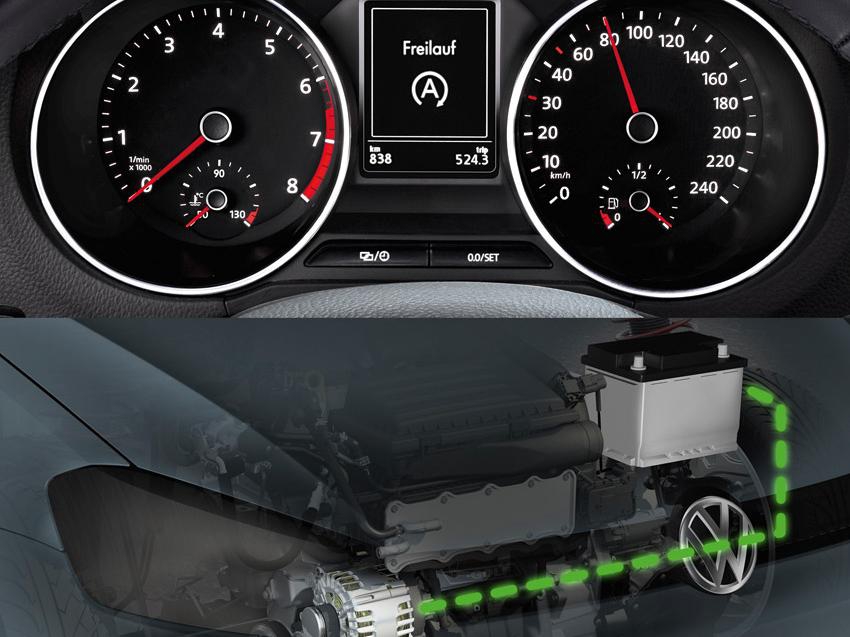