Forgot to post this earlier. This may be the first topic I actually agree with Mayor de Blasio on. 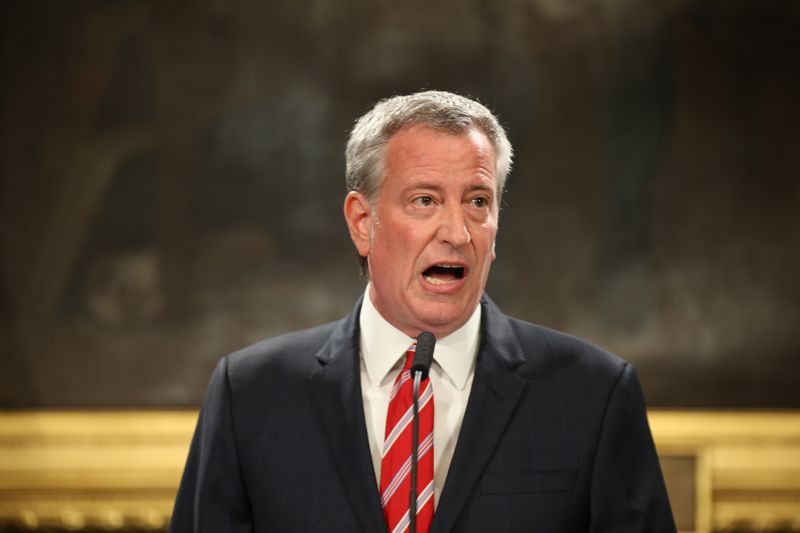 Mayor de Blasio on Wednesday said he was considering requiring bike riders to be licensed, and even pitched the idea of forcing Citi Bike renters to wear helmets.

“We have to think about what’s going to be safe for people first, but also what’s going to work,” the mayor said of the helmet requirement. “Is it something we could actually enforce effectively? Would it discourage people from riding bikes? I care first and foremost about safety.”

De Blasio added that he thinks the idea to force cyclists to have licenses and registration is a “valid discussion.”

Whether or not he moves forward with the license requirement, the mayor said he plans to crack down on cyclists who break traffic laws, despite little evidence suggesting that bikes are a menace to public safety.

“We are going to keep expanding enforcement on bicycles as well, because we still have a lot of bike riders who have to remember they have to follow the rules,” said de Blasio.

[More New York] New Jersey PATH adds locked barrier to wheelchair entrance at Newark station to combat fare evasion »
UOne pedestrian has been killed by a bicyclist this year, while 20 cyclists have been killed in car crashes.

“It’s pretty clear that the difference between a cyclist running a red light or a pedestrian crossing against the signal doesn’t wreak havoc like a multi ton motorized vehicle disobeying a traffic signal,” said Joe Cutrufo, spokesman for advocacy group Transportation Alternatives.. “The two are not same.”

“I’m all about safety, but we need to be encouraging cycling, not creating obstacles,” Johnson tweeted Wednesday. “These ideas won’t help us increase bike riding in NYC.”

De Blasio in July announced a $58.4 million plan to rapidly expand the city’s network of protected bike lanes — the city Department of Transportation will hire 80 new staffers to help implement the plan.

[More New York] SEE IT: Free wheeling motorcyclists surround lone cop after he pulls biker over in the Bronx »
Still, Cutrufo argued that new regulations on bikes would lead to fewer cyclists in the city, regardless of the mayor’s plans for more bike lanes.

“Requiring helmets and bicycle licensing is counterproductive to Vision Zero because they’re a deterrent to cycling,” said Joe Cutrufo, spokesman for advocacy group Transportation Alternatives. "When you discourage people from riding a bike, fewer people will do it, and the safest cities in the world for riding a bike are the cities where there are the most cyclists.
Click to expand...

Dumbest shit from the article:

some lycra douche said:
“It’s pretty clear that the difference between a cyclist running a red light or a pedestrian crossing against the signal doesn’t wreak havoc like a multi ton motorized vehicle disobeying a traffic signal,” said Joe Cutrufo, spokesman for advocacy group Transportation Alternatives.. “The two are not same.”
Click to expand...

Yeah unless you have to fucking emergency stop cuz some pedaling retard decided to go wrong way and dart onto the crosswalk (both illegal) while you are making a left, causing an entire line of cars going straight to have to jam on their brakes with varied results. Sure a bicycle hitting someone doesn't have same impact as the car but it has impact on the rest of the traffic.
You must log in or register to reply here.
Share:
Facebook Twitter Reddit WhatsApp Email Link
Top