I don't think he got there in time... we need a lip reader, quickly

Croatia played very well, had a great chance at scoring saved by Cassillas, also possibly two "maybe" penalties. Spain looked less impressive that before, but did enough in the end to qualify. (Credit to Croatia for keeping them quiet by working hard.)


Jay said:
Notice how after the goal one of the players put a hand over his mouth?

I watched the Spain & Croatia game and only saw the Italy highlights/goals.

What was Balotelli's problem and with whom?

Whoever the teammeate was that kept him quiet, probably did him a big favour.
He looked like he was about to explode, rather than being pleased at securing his team's win with a goal.

Jimi Hendrix said:
[Off-Topic ON]Players like E'too or Ibra were literally kicked out of FCQ because Messi wasn't happy about them since they wanted too much prominence in the team. He appears to be humble beacuse he has the verve of a not very bright 3 yr old boy, but he as ego is as big as Ronaldo's [Off-Topic OFF]

You may want Portugal to win, but to be honest, your posts in this thread tell a completely different story. You enjoy a good CR7 beating more than any Portuguese victory.

And if you think that they could win the championship scoring four or five goals everyday and without even allowing their opponents any goal chances you need a reality check since that is never going to happen.

About today's games, here in Spain everybody seems to think that the match against Croatia will be like a walk in the park, so I hope that over-confidence doesn't affect the team. In Italy on the other hand, they are scared about this match finsishing as a 2-2 draw which would send them back home.
Click to expand...

I have two close Portuguese family friends who despise Ronaldo and his antics. He appeared to be a humble individual back in '04 Euro where he consistently played with heart but nowadays you rarely see that Ronaldo. Luis Figo will always be held in higher regard than Ronaldo, hell I like Nani, and Nuno Gomes before Ronaldo.


Jay said:
Notice how after the goal one of the players put a hand over his mouth?
Click to expand...

I wonder if his head will ever cool down to a degree of rationality. It's hard for me as an Italian fan to like him because of his attitude by my god he is good. I also understand that he's had to deal with a lot of bullshit in Italy and it's probably made him just a tad bit hostile...

Also I'm tired of the way the british and american media portray the Italian team and its players, their hate is far too visible.
Last edited: Jun 19, 2012

Well offside anyway. Two wrongs do make a right in this case.
B

How many times does this have to happen before they hurry up and get that goal line tech done?

Buktu said:
How many times does this have to happen before they hurry up and get that goal line tech done?
Click to expand...

They were in testing a few months ago, it'll take years. 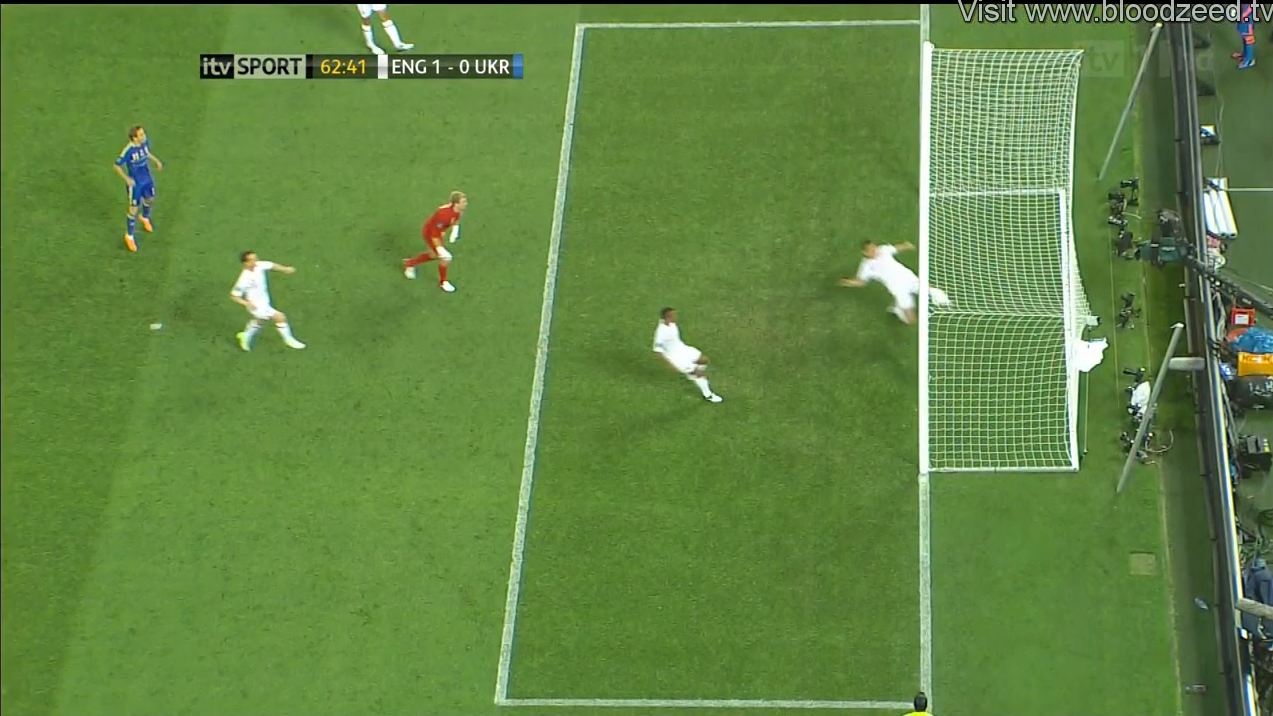 Nah, clearly not a goal.
B

How can the ref in the bottom of that picture not see it?

But no-one saw that, so it woulda been a goal... if it had hit the net, obviously.

Aston Martin said:
But no-one saw that, so it woulda been a goal... if it had hit the net, obviously.
Click to expand...

As I said 2 wrongs do make a right in this case. Whichever way you look at it that should never have been a goal, and it wasn't given as such so extra lashings of ginger beer all round.
B

I dont see any offside what so ever:

I might've been watching the wrong pass..

Aston Martin said:
But no-one saw that, so it woulda been a goal... if it had hit the net, obviously.
Click to expand...

How could the new penalty box official not see that? FFS

Ukraine played well enough to get something out of the game, not the win but a draw maybe.
Joe Hart is a good GK, isn't he? (Still remember Robert Green ricket in SA, uggh.)

France look at sixes et septs, encore. They will probably now go on and get an unlikely win against Spain now and win the tournament.

France just can't get that offense working no matter what they try. On the positive side Blanc isn't afraid of experimenting and we've seen different line-ups in every game so far. Ben Arfa in the starting 11 yesterday, Giroud and Benzema on the pitch at the same time etc. Can't really try afford to try anything new anymore, I'd say their line-up against Ukraine worked out the best.


So that would give us semi finals of Spain v. Portugal and Germany v. England.

I really doubt England will have it easy against Italy. They didn't exactly blow Ukraine out of the water. Ukraine had tonnes of great chances.

Portugal wins 2-1 over Czech Republic
Germany wins 1-0 over Greece
England wins 2-0 over Italy
Spain wins in penalties over France after the game ends 0-0
Click to expand...

Only that I suspect there may be a surprise or two, which could be almost any of the matches.


ahpadt said:
I really doubt England will have it easy against Italy. They didn't exactly blow Ukraine out of the water. Ukraine had tonnes of great chances.
Click to expand...

Oh yeah, apart from that one. Italy will probably be too much for England, just hope it doesn't go to penaltys from a nil - nil draw.

And no football tonight, I am withdrawing here.

Overall great brackets for the quarters and semis... I think Portugal has what it takes to see CZE's threat off, but after that it's either Spain or France, and those are very unlucky rivals for us on official tournaments.

ahpadt said:
I really doubt England will have it easy against Italy. They didn't exactly blow Ukraine out of the water. Ukraine had tonnes of great chances.
Click to expand...

Italy isn't exactly tearing it up right now. My prediction also includes a red for Balotelli, which is why I don't see Italy scoring. I think England scores early in the game and Italy begins to press, later Terry gets under Balotelli's skin who then earns himself a red. Italy goes conservative for the meat of the match then begins to become desperate and Theo Walcott scores off the counter.
You must log in or register to reply here.
Share:
Facebook Twitter Reddit WhatsApp Email Link
Top