Last year I decided to sell my old motorcycle, because.... no reason really, I just wanted to try something a bit different. So I did a few test rides last year and after I managed to sell the CBF faster than I anticipated, went on a search for a new bike this winter. After careful consideration, of course I ended up with the bike that was already my favourite nearly a year ago. I could have had that easier...

Waiting to go home from the dealership: 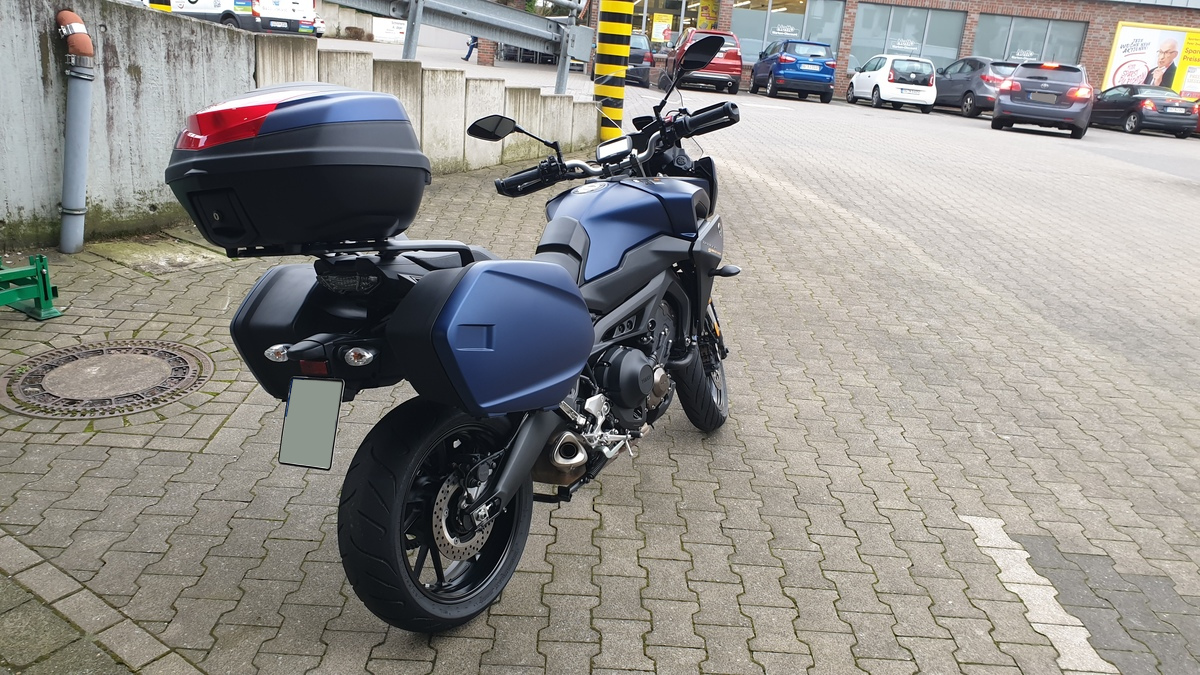 It's basically an updated and slightly better equipped version of the bike that @RdKetchup (thread) and @altoid (thread) also have, hence the thread title.

So, data:
This particular bike was a dealer demonstrator last year, so it comes pre-abused and well run-in at 3500 km as you can see on the picture of the lovely screen. I found it on mobile.de at a dealer an hour away from my town, so after a test ride and the subsequent decision to buy it right there and then I had to wait two weeks for all the paperwork and a bit of work on the bike to be done before I could actually get it home. 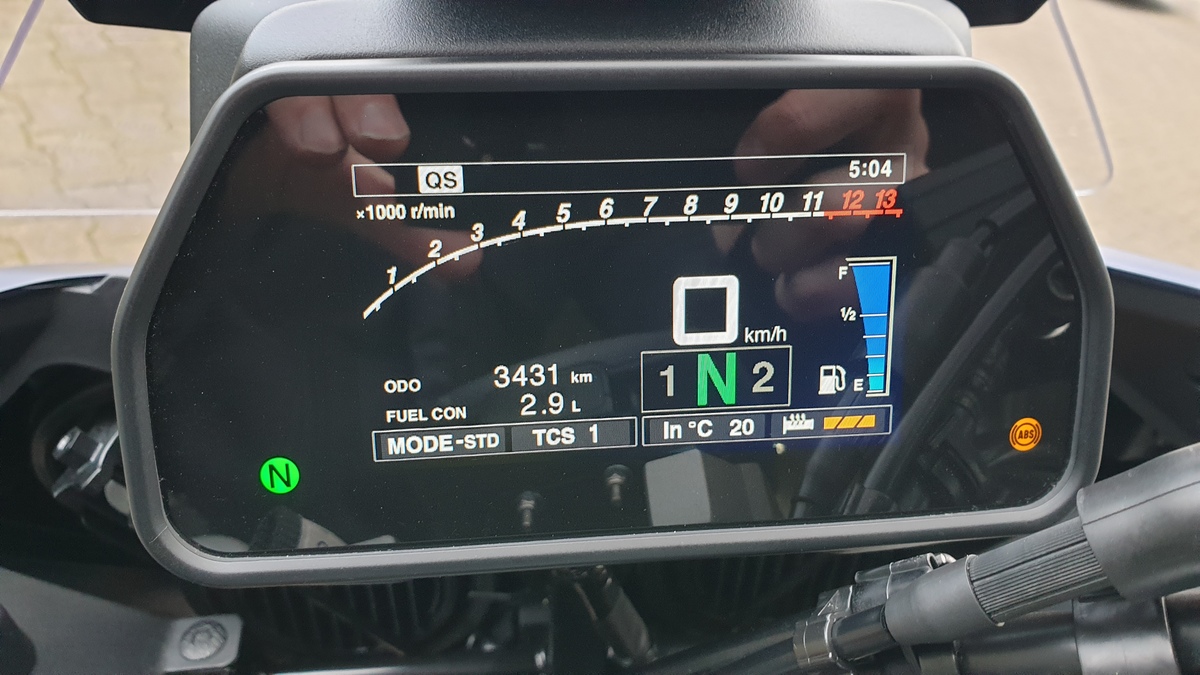 As evident in the lower right corner of the screen, it has heated grips. Together with the protectors in front of the grips, that makes cold-weather riding much more comfortable.

As the bike even came with a nearly full tank, I didn't want to wait any longer and rode home the quickest way possible - meaning 50 km of Autobahn. Sadly, other commitments prevented me from riding it more that evening, and the weather ever since so far.

So, some pictures from when I arrived at home: 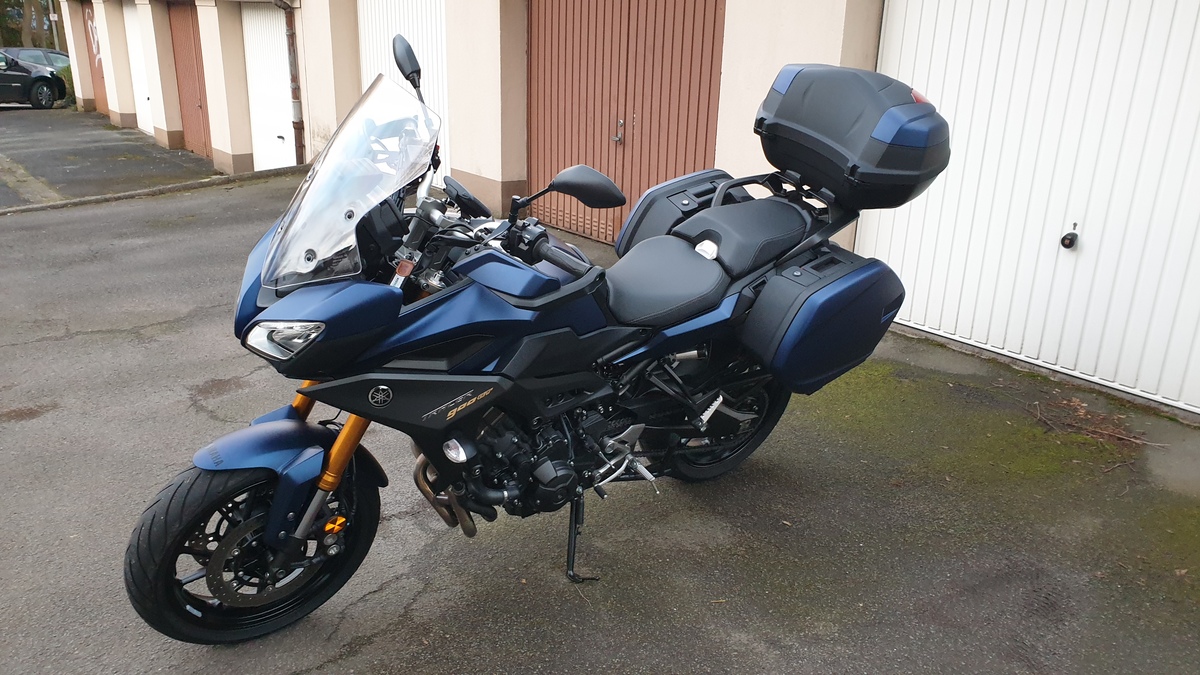 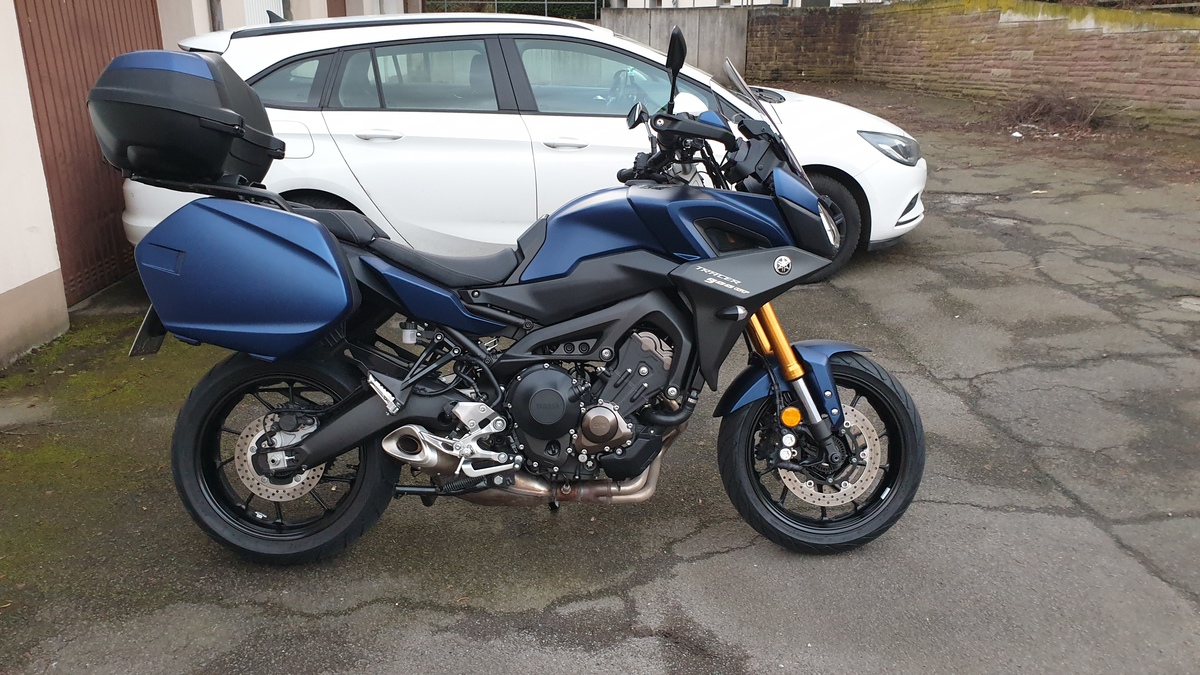 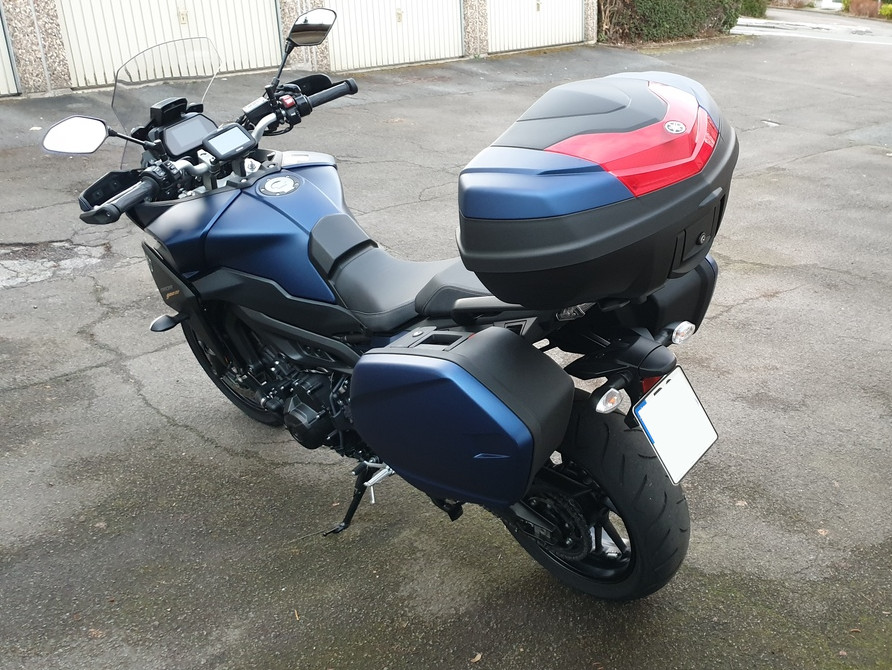 The side cases come as standard in the GT version, and I ordered the topcase (and the luggage bridge to mount it... and the blue covers to make it fit the rest of the bike...) as an option because top cases are just the most practical thing on a bike. 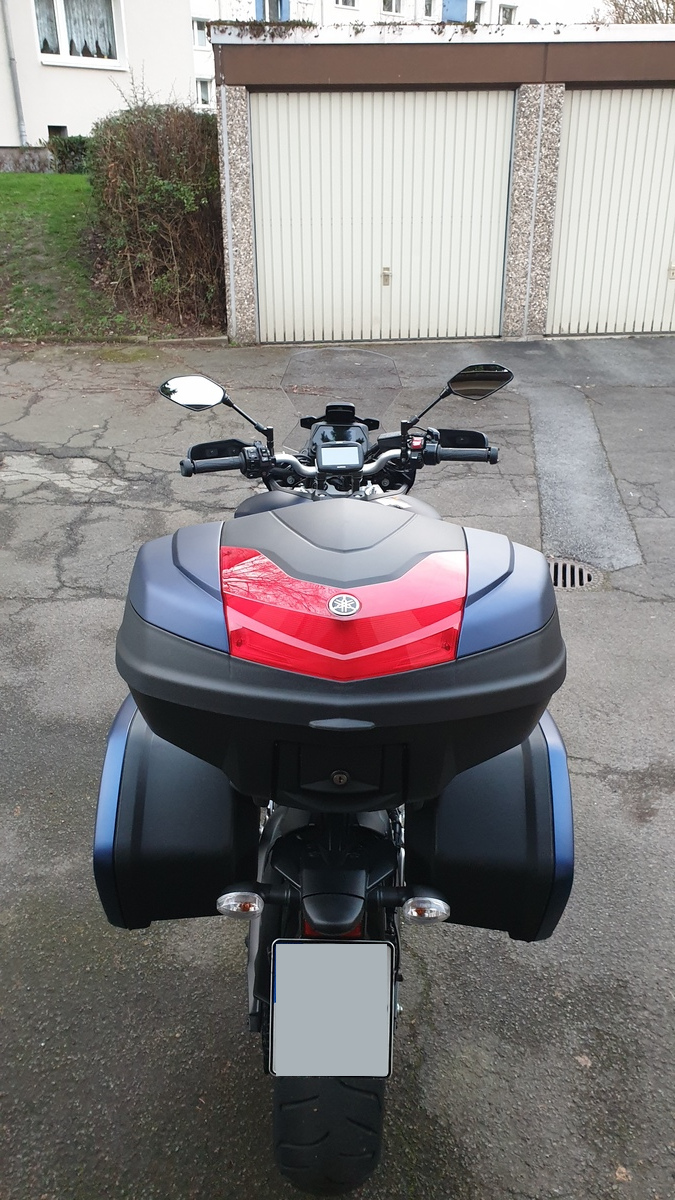 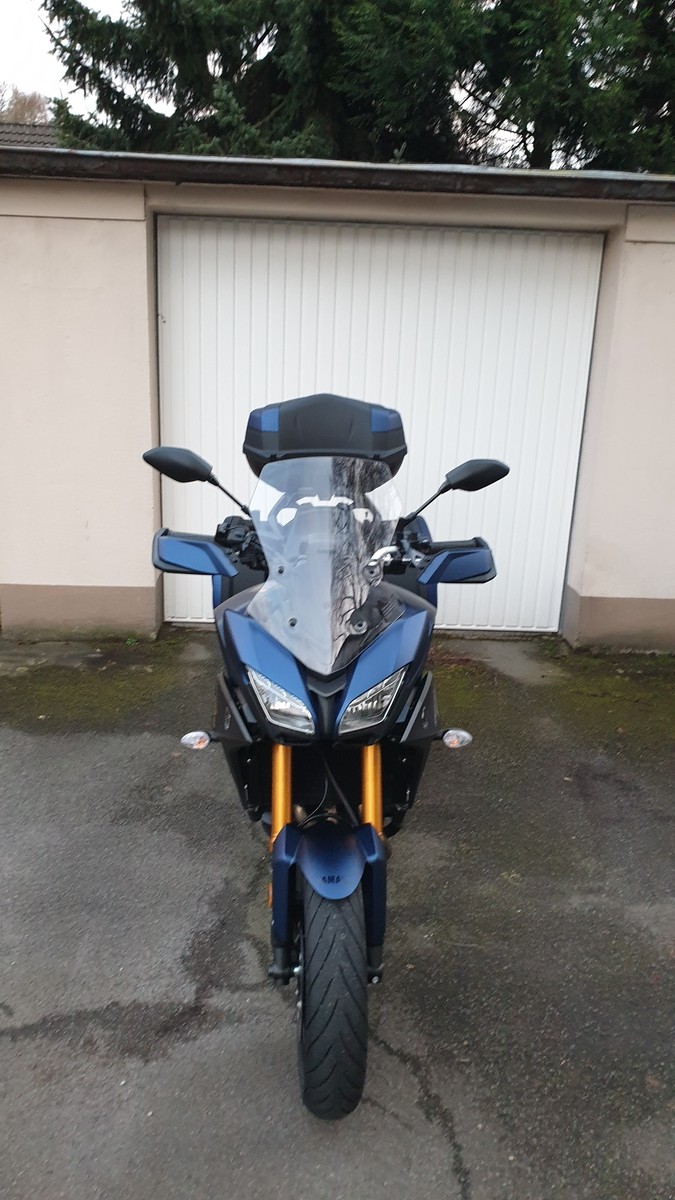 Fat ass, but hardly visible from the front. 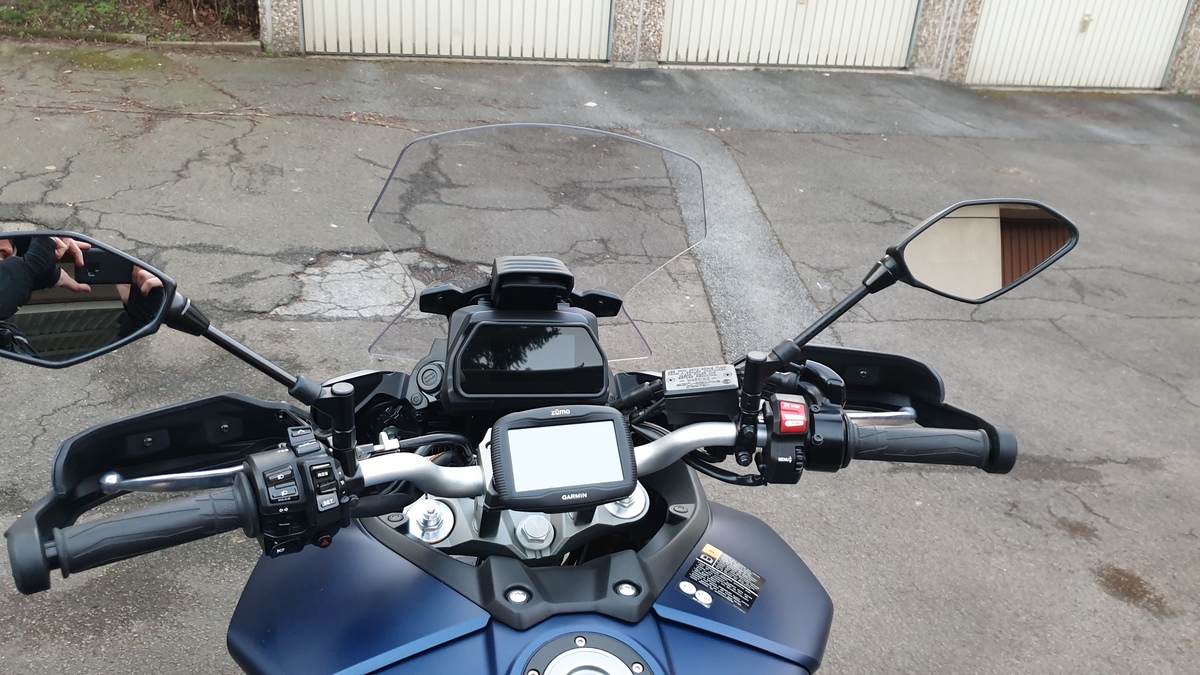 Close-up of the cockpit. The GPS system is my old one, I had the dealer install it.
Also, left of the screen you can see a 12V outlet that's apparently also standard on this model. And on the left side of the handlebar, to the right of the high beam switch, there's the cruise control. Also a very nice comfort feature for Autobahn runs.

I took off the luggage, now it looks much slimmer. The luggage bridge looks a bit ridiculous without the top case on it, I must admit. I still have the original grab handles, of course. 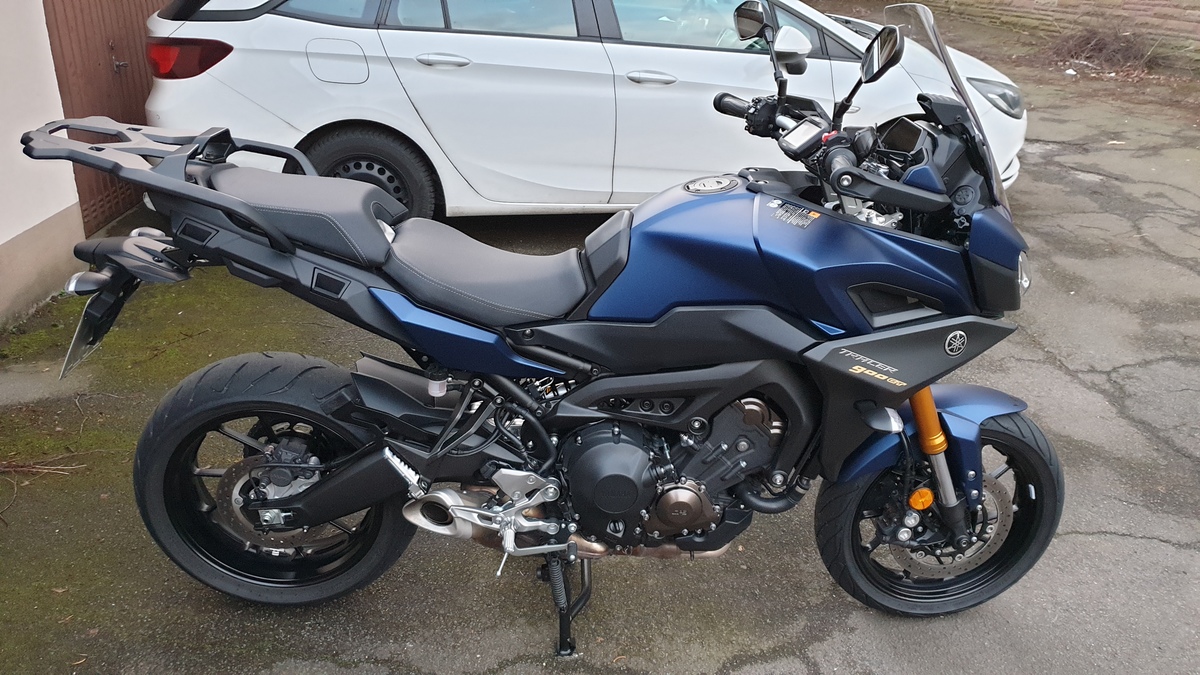 Today I had a bit of time, so I managed to do the first item of the to-do list: Install the phone mount (for details on the system see the post in my old thread). On the picture, I just put on the phone case for illustration. Next up: buy a 12V-to-USB adapter and another charging cable for emergency charging. I realize that having a USB cable on the phone while it's mounted on the handlebar might not be the best thing to to, so maybe I'll invest in the wireless charging module for the phone mount to eliminate the USB plug connection from the moving handlebar.
While I was at it, I also changed the position of the GPS from the lower to the upper screws for a bit less angle looking down at it. 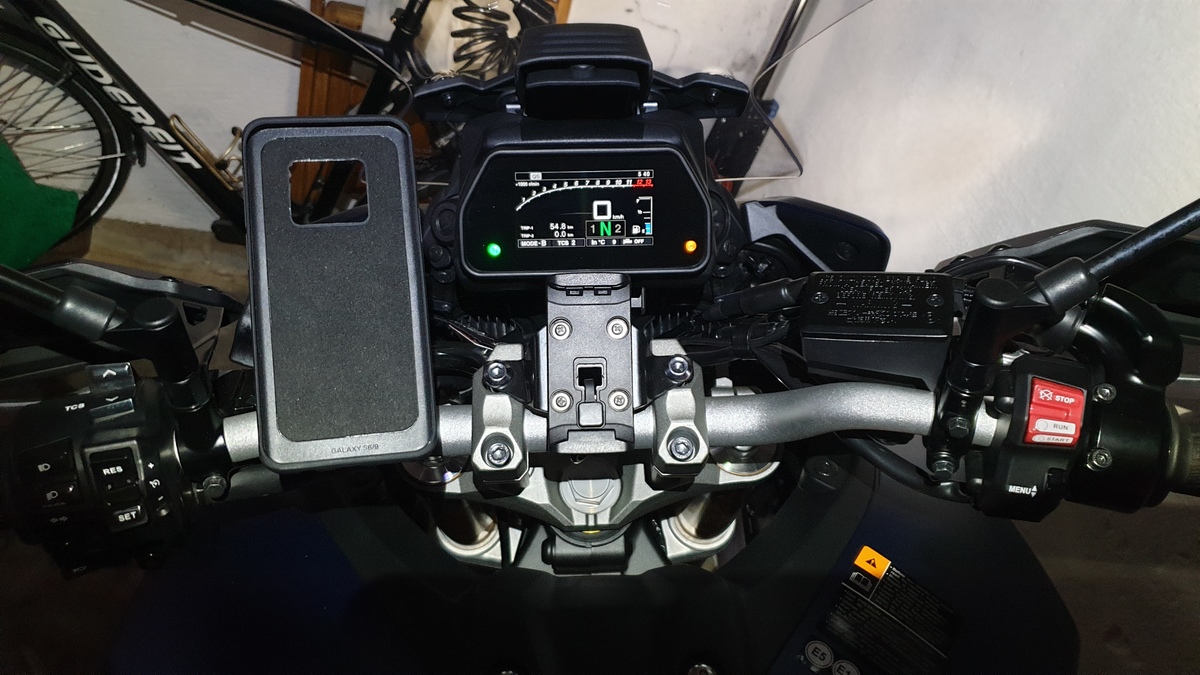 And last bit for the beginning: fill the bike up with my stuff for emergencies and other unexpected situations. Just for the heck of it, try if all of it fits. Yes, it does, with a bit of squeezing. To elaborate: 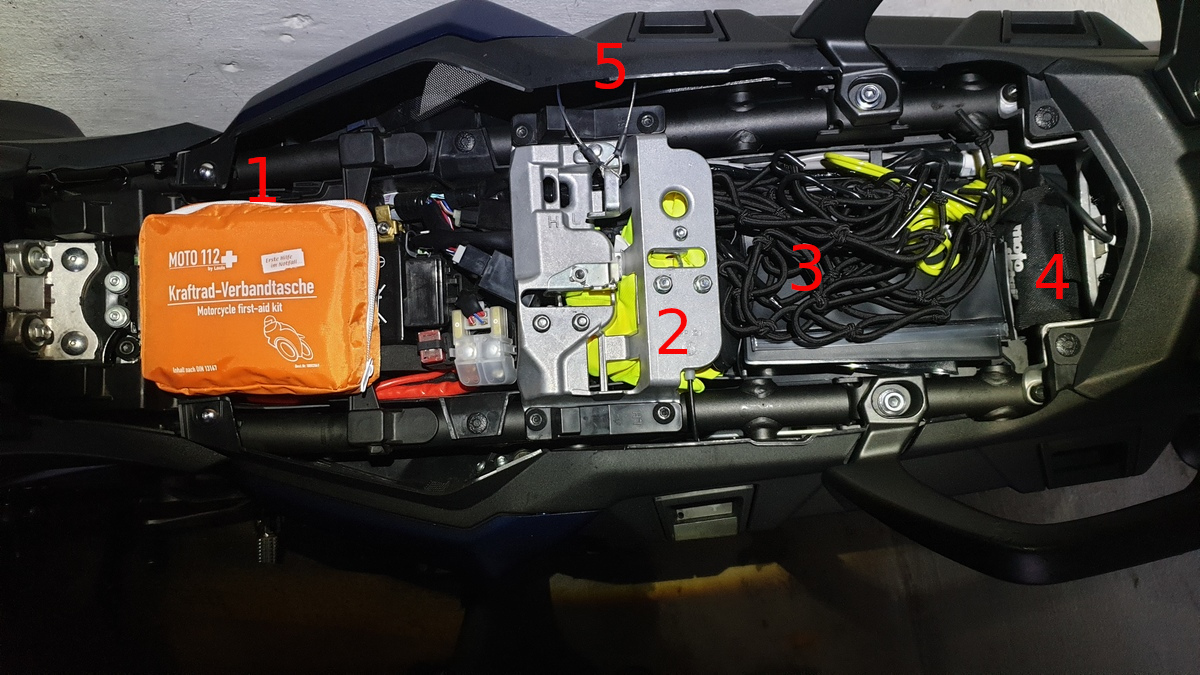 The next thing to do is.... taking a proof picture. I totally forgot that. May take me a few days though...

After that a tank bag is in order. This time with a tanklock system. I'll have a look at the Givi solutions at the Louis store, because they are significantly cheaper than what Yamaha themselves offer.

Now, what am I missing....? Right, spring weather. 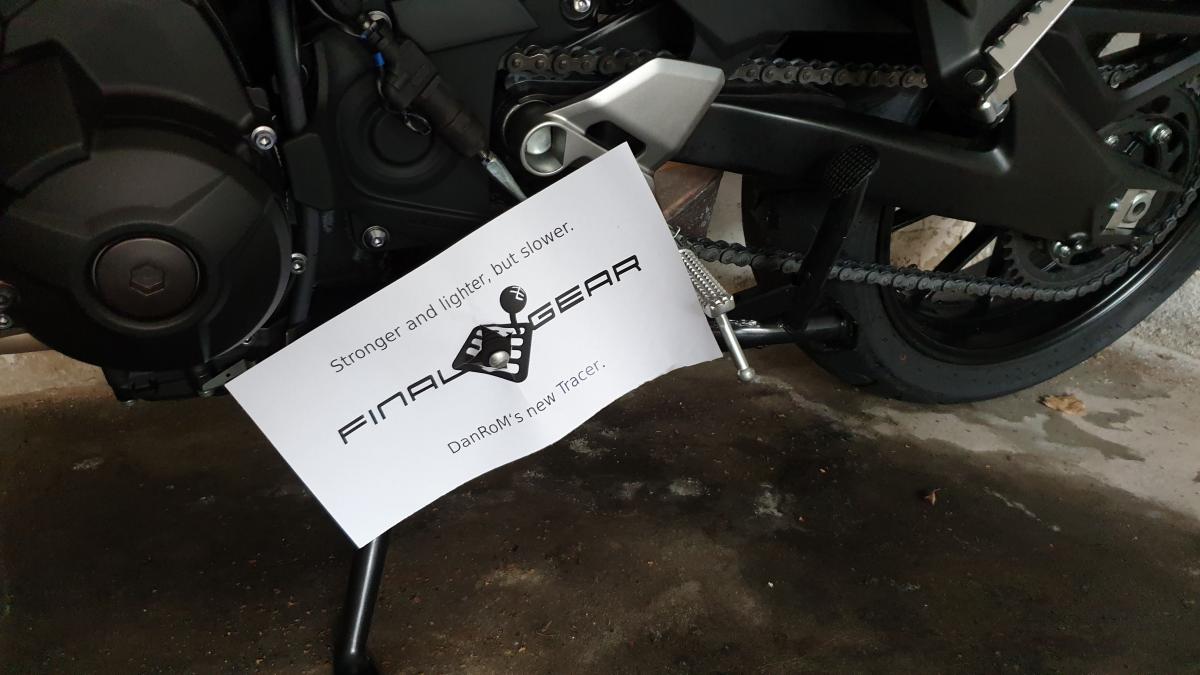 I'M HERE FOR THIS.

Love the colour, smart and subtle and goes nicely against the contrasting forks.

Yay on the new bike! Congrats!!

Welcome to the club! Haven't ridden mine in months...

I've still haven't ridden it yet. The weather has been shit...

I've updated the opening post with a proof picture. All is in order now!

@MWF - Yeah, the colour is absolutely brillant. I especially love the matching cases. Looks so much better than a third-party solution.

Meh not that nice.


Just kidding, that's my jealousy talking. The extras on the GT seem very nice, and the color is awesome. At least the shorter wheelbase of my non-GT makes it easier to wheelie.

I'm still getting used to the bike, notably setting off is not my strong suit because the clutch feels totally different than on my old bike. And the other thing, I'm sometimes a bit confused by all the buttons for my left hand. I don't understand why the traction control has such a big and prominently placed switch, for example. And the engine mode switch is exactly where the headlight flasher was on the CBF. Well, I will get use to it in time.

In other news, someone gave me the idea that due to this Corona shit, the roads might just be a bit empty, so today I set off to see how fast the Tracer can actually go. And, to my surprise, it goes exactly 210 kph, as promised in the papers. And that's GPS-measured 210, with the speedo hovering at 223, occasionally flicking to 224.
So onto the Googles, and yeah, the Tracer comes with a limiter. On the one hand I'd like to remove that as a matter of principle, on the other hand why bother? I'm not planning on riding that fast anyway.

But I am annoyed that apparently Yamaha managed to somehow make the bike very precisely know its speed at 210 kph and yet, the speedo is off by 13 kph there, and also about 5 kph already at city speeds.

Count yourself lucky you don't have the north American 185 kph limit.

A month ago, I ordered the original Yamaha tank bag after all, after I had a look at what Louis and Polo had to offer. Ended up paying about €60 to 80 more, but the bag is nicer.
So, this Thursday, it was finally ready for pickup at the local Yamaha dealership, so I decided to pick it up in proper style, meaning by bike. It was a bit hot that day for inner-city rush-hour riding: 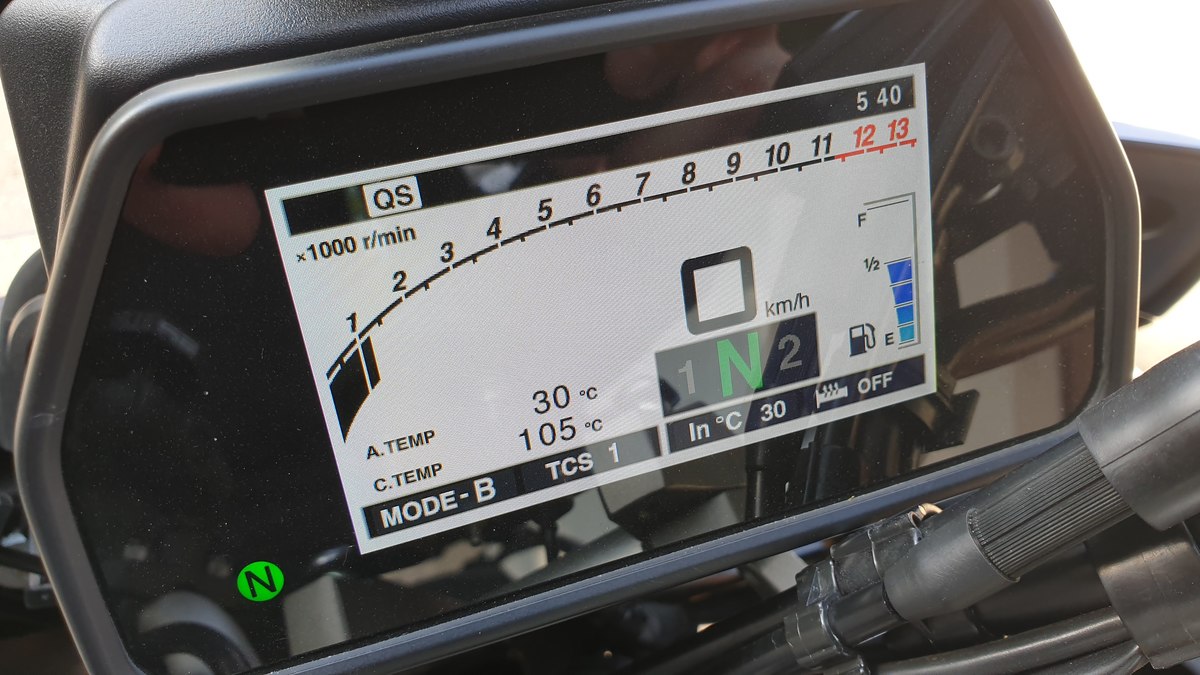 Anyway, I brought this home: tankbag itself plus a tank ring, for ease of use. The rain cover and the shoulder strap found their places in the side pockets of the bag, which are useless for anything else anyway... 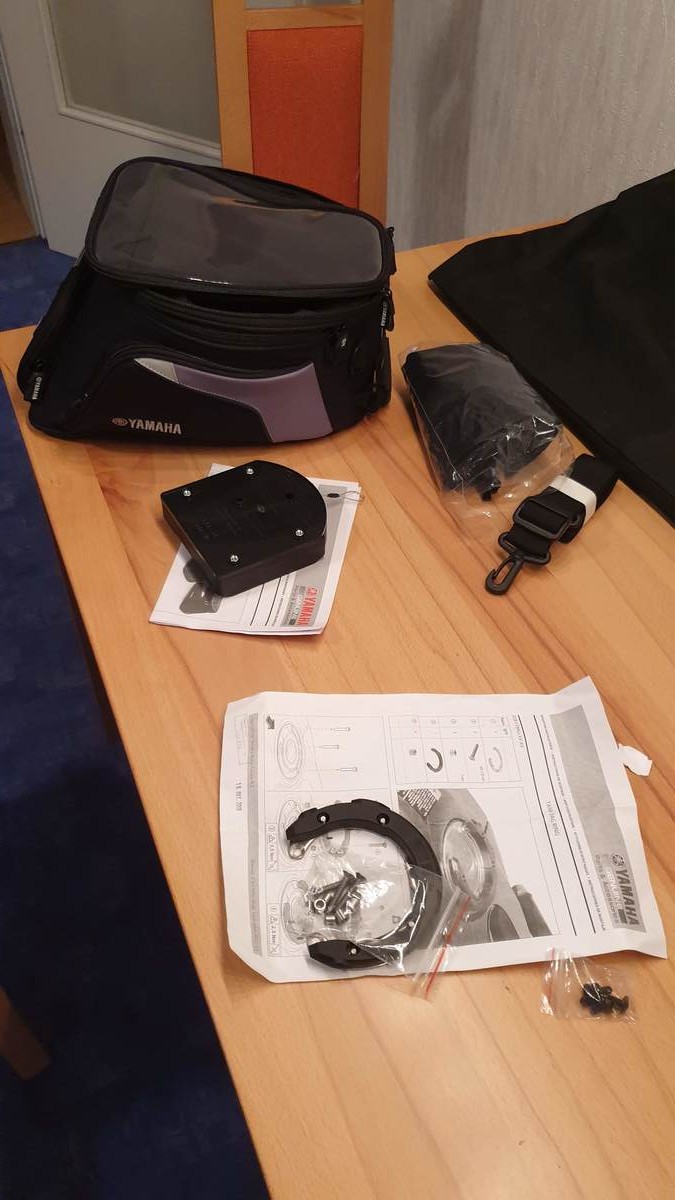 Of course, that means I had to install it, which I did today. Installing the tank ring: 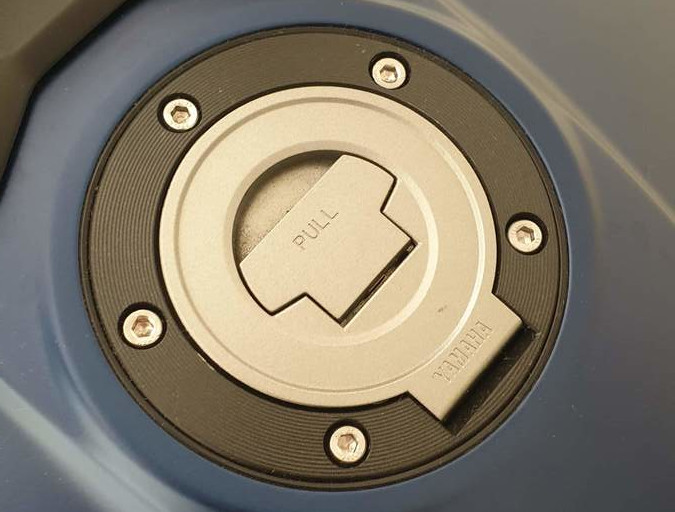 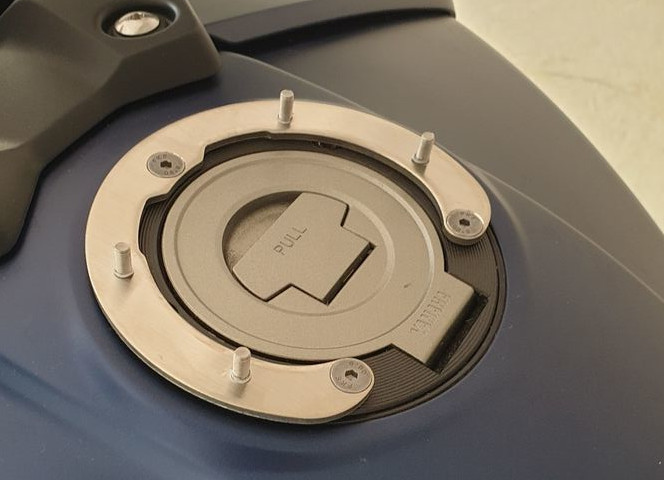 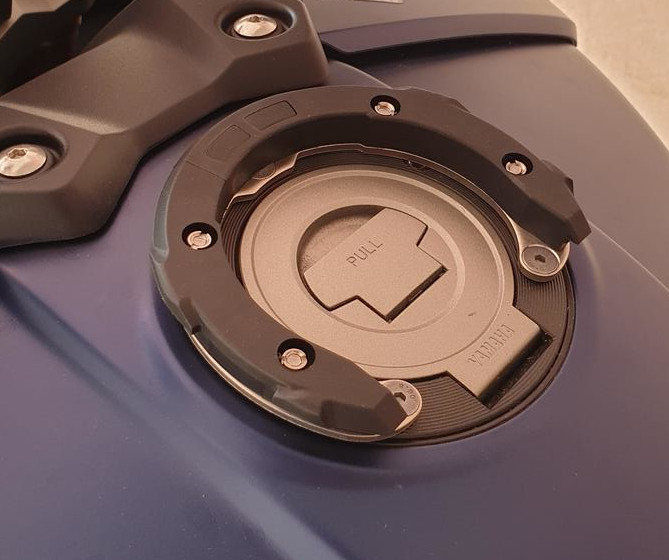 Putting the mounting plate on it: 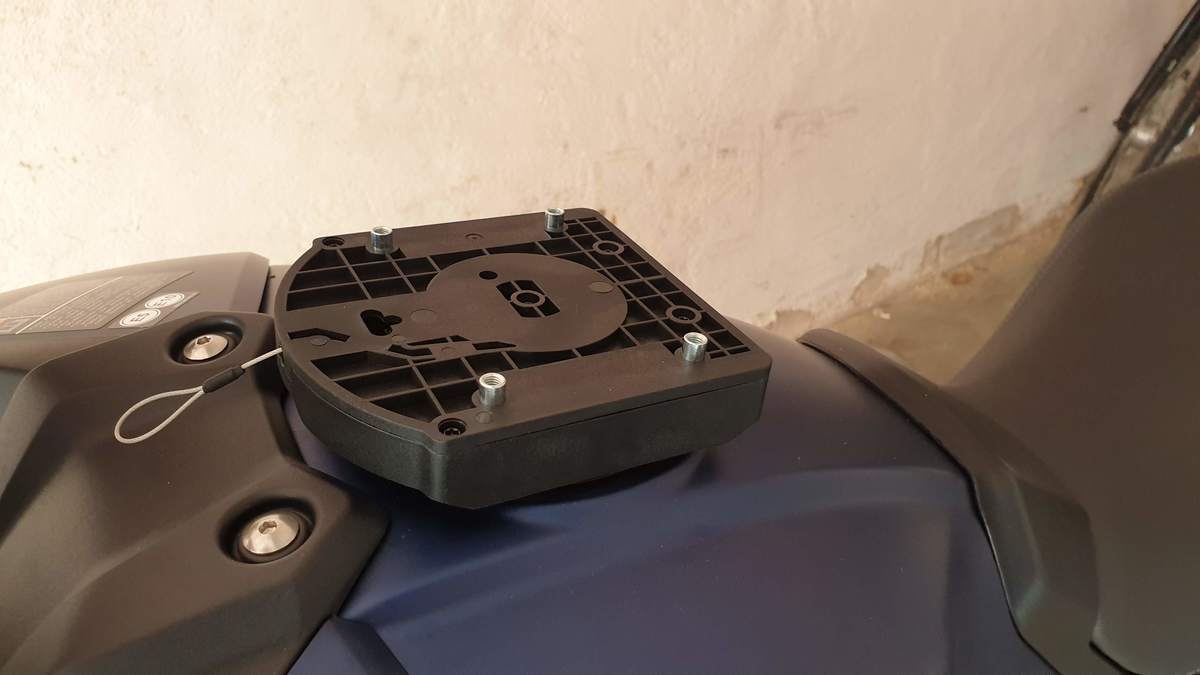 And trying out how exactly to place the bag on the tank. As far back as possible: 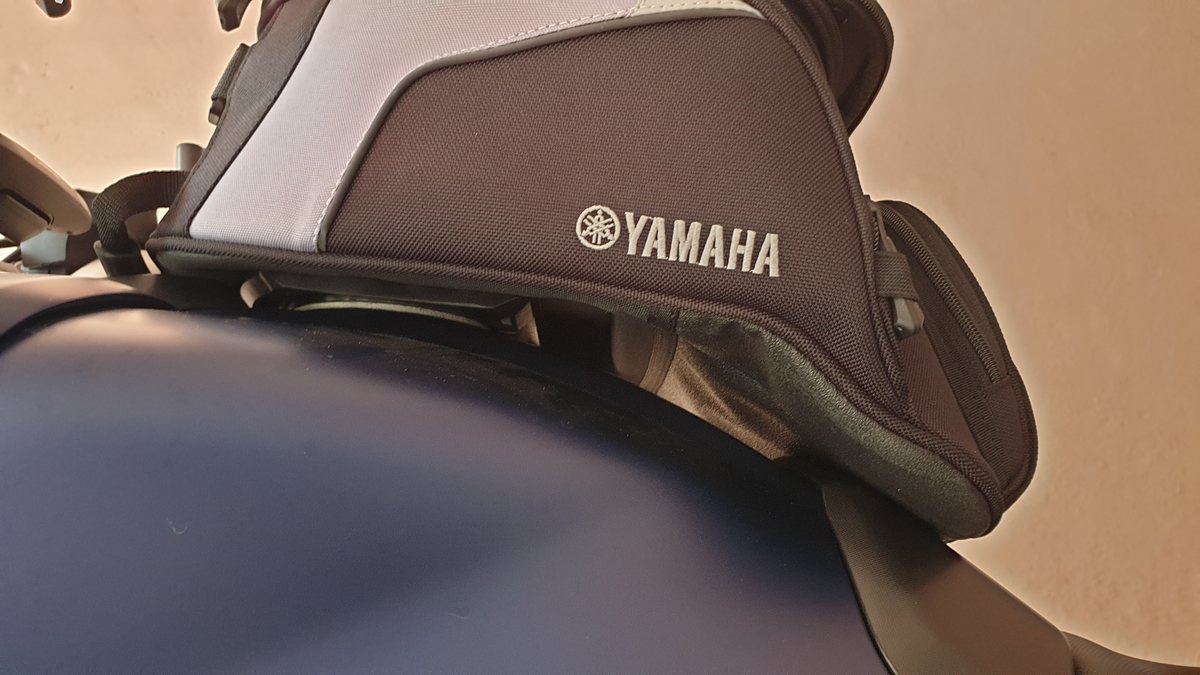 Hm, no. The opposite, as far forward as possible: 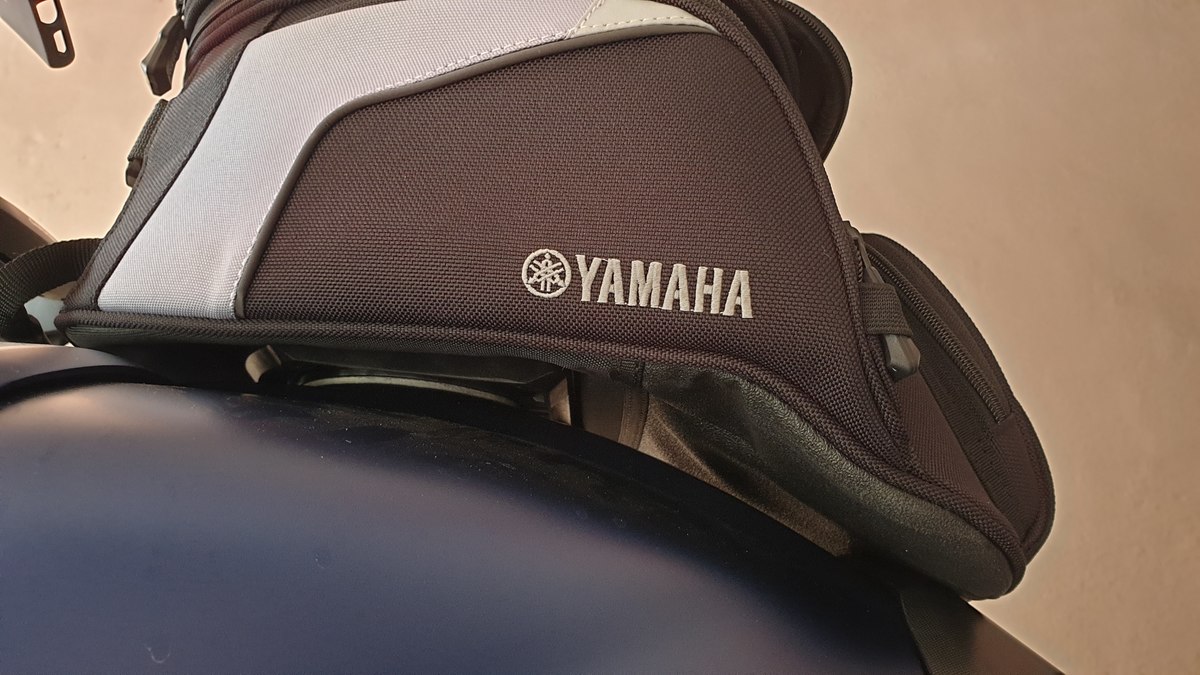 Much better. Testing full lock in both directions: 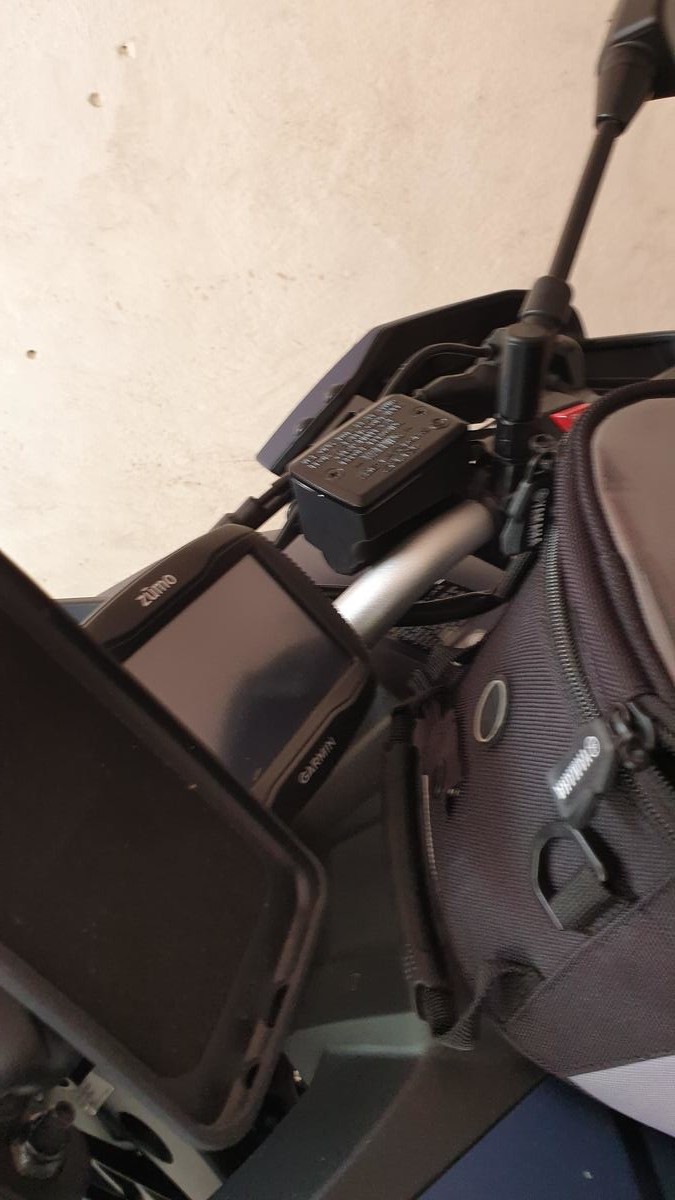 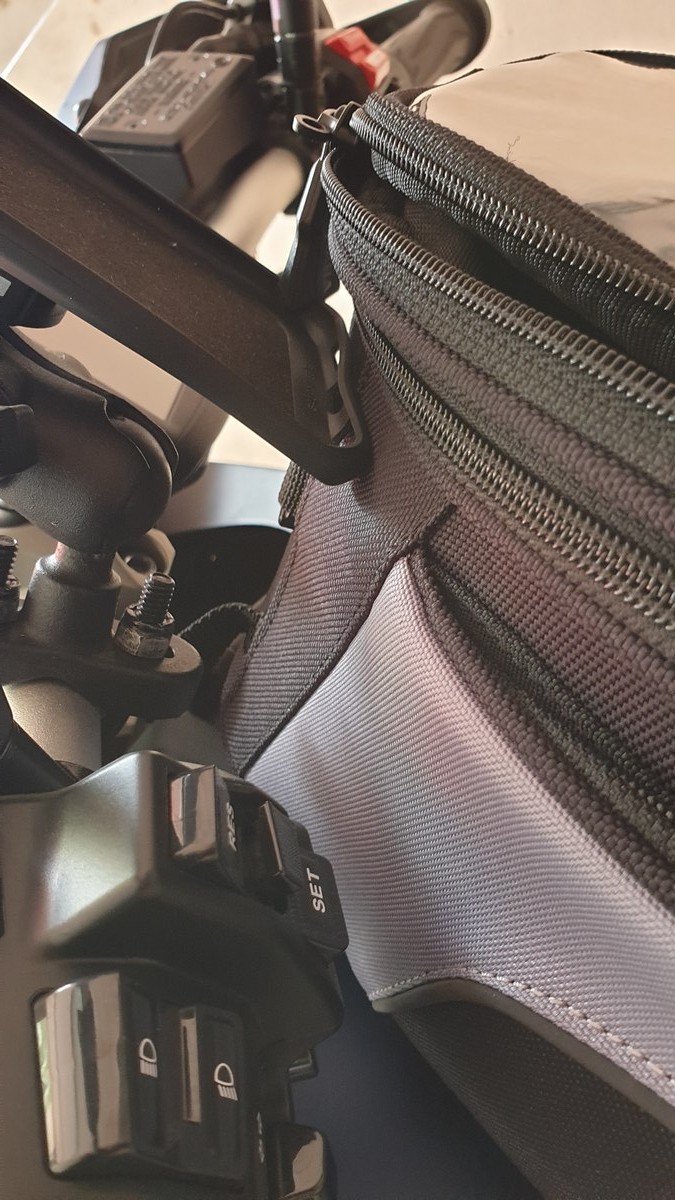 No problem to the right, but to the left, the phone touches the bag. But nothing to worry about unless I'm charging the phone while riding. And then I can rotate the phone to landscape mode so that the cable sticks out to right, not to the bottom.

After that cleared up, I had to install the mounting plate to the bag. That required some drilling. 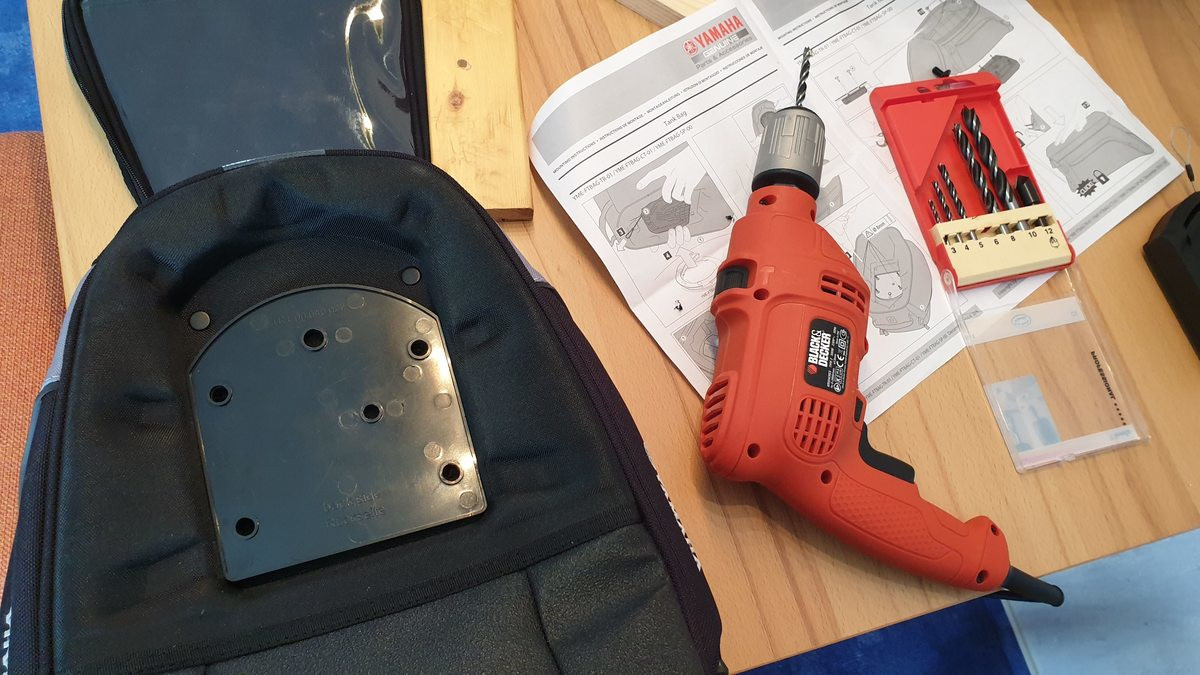 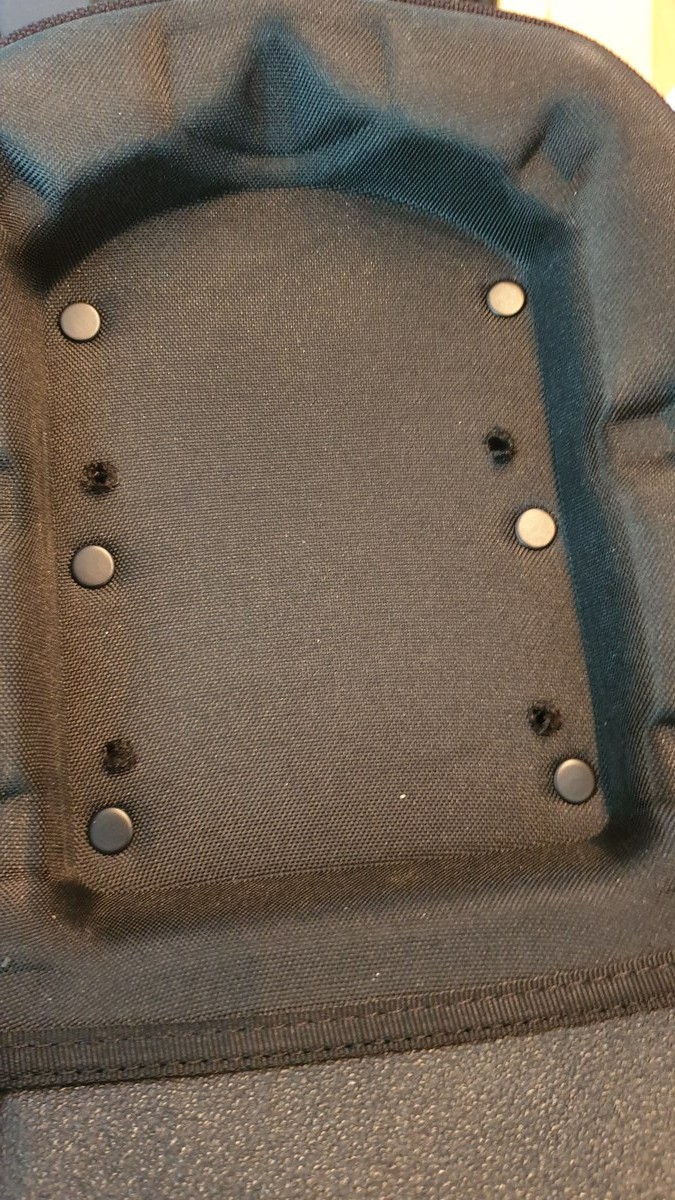 I didn't have enough suitable pieces of wood to place underneath the drill, so I sacrificed a really shitty book: 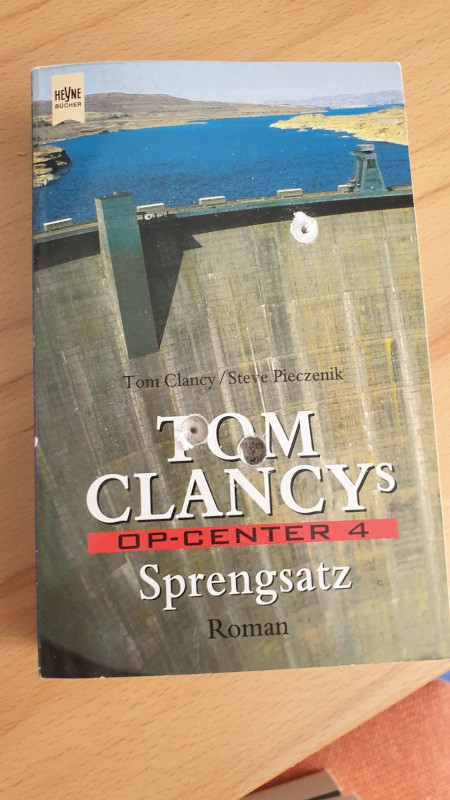 Putting the mounting plate in and securing it with the screws provided: 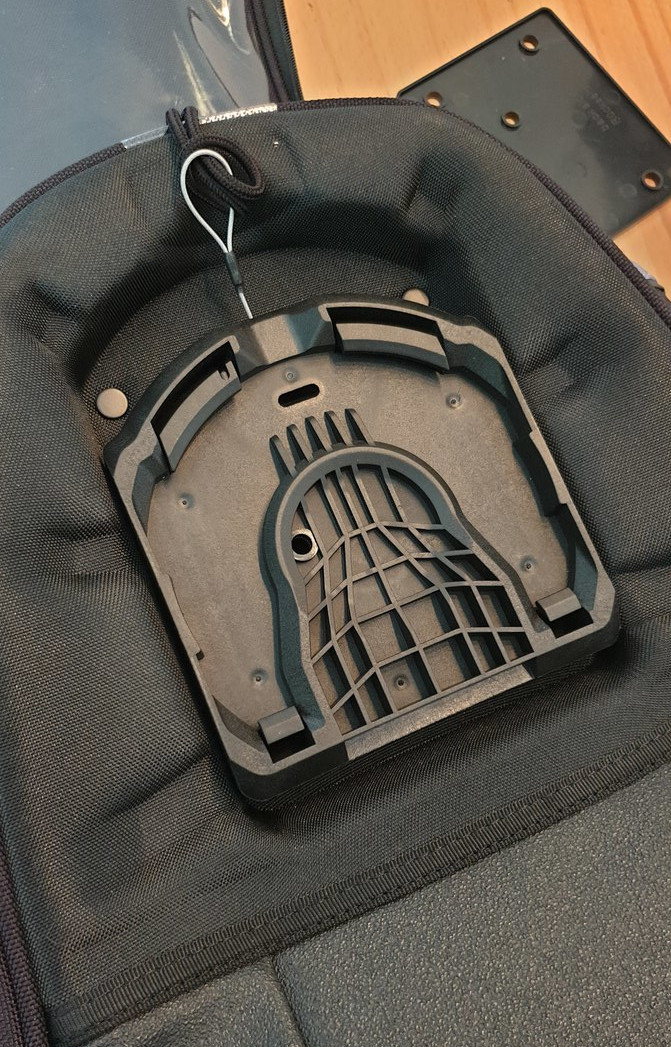 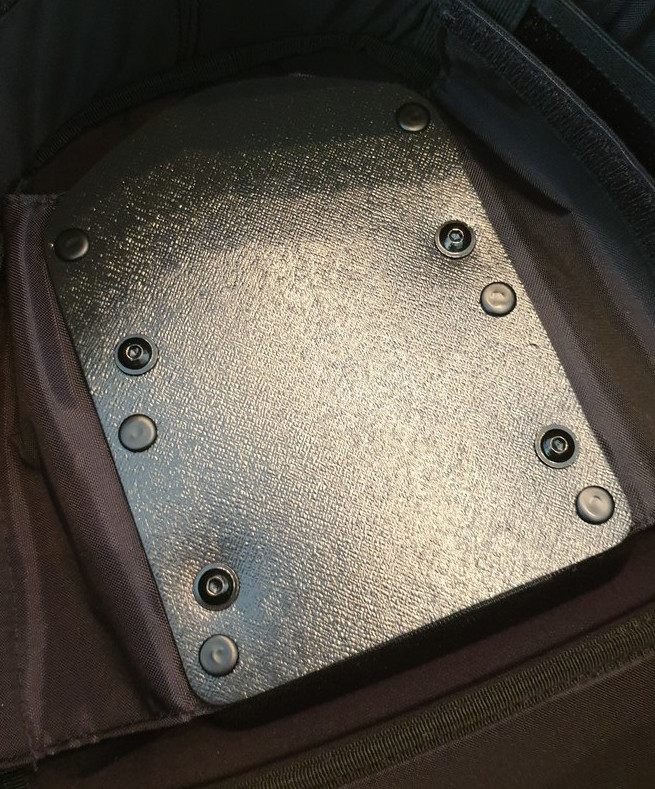 And covering it on the inside of the bag. 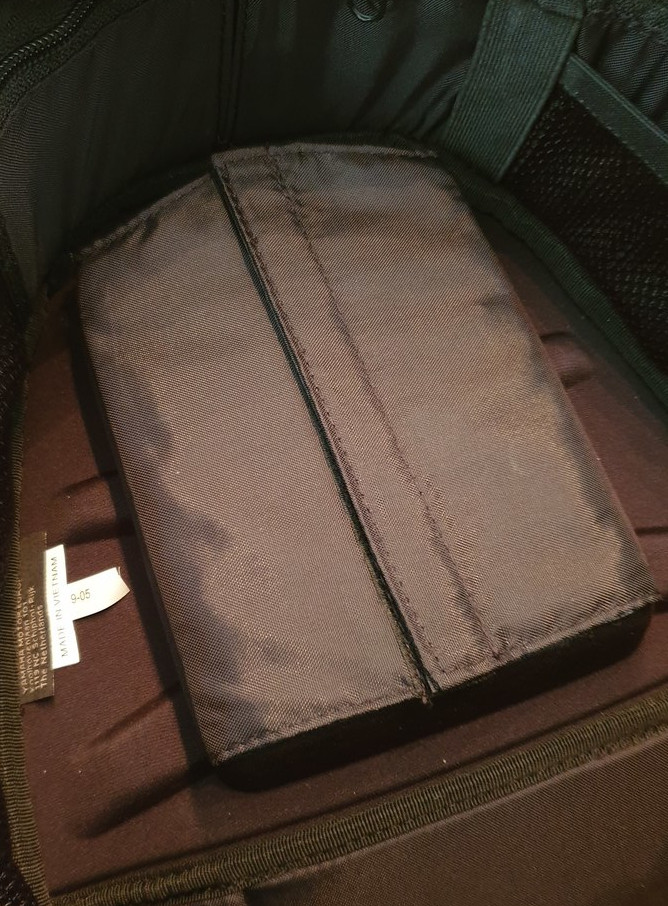 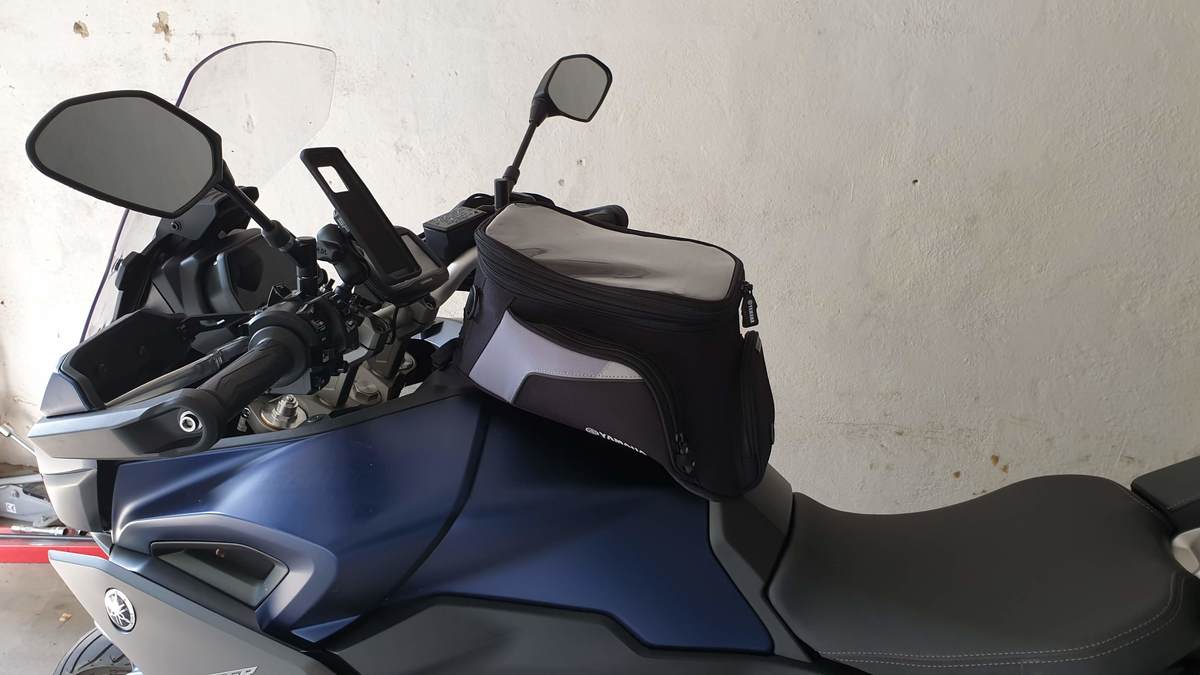 Now I have a nice place to put wallet, a bottle of water and some other stuff while riding.
Last edited: Jun 27, 2020

I'm here for the only good use for a Tom Clancy book.

I have the same brand (SW-Motech) tank bag on both my wife CBR and my own FJ09.

I think it's the best tank bag solution, even if the installation is a bit annoying, specially when you install the plate slightly crooked