As a split from some other stadium talk in the Favorite Sports thread, I thought I would make a thread where everyone can post pictures or videos of their favorite venues. I'll start with mine.

University of Illinois' Football Stadium built in 1923 as a memorial to WWI vets, after our school outgrew old Illinois Field. It holds around 62 thousand, it was around 69k but with the controversial renovation and addition of more luxury boxes it decreased capacity.

This is roughly the view I had for all but 2 home games during my 4 year span at Illinois. One I was sitting elsewhere, got into the luxury boxes thanks to a friends dad, and the other being the only home game I missed.

"The Spaceship" as I like to call it is where Illinois plays its basketball games. It was built in 1963, designed by an Illinois alumnus. Seating is 16k and is one of the toughest stadiums to play in college basketball. It is always packed, and the shape reflects the crowd noise onto the floor. I went to most home games as a member of the Orange Krush, and we got sweet courtside seats.

Picture of the Krush, we never sit down all game and taunt the hell out of the opposing team. 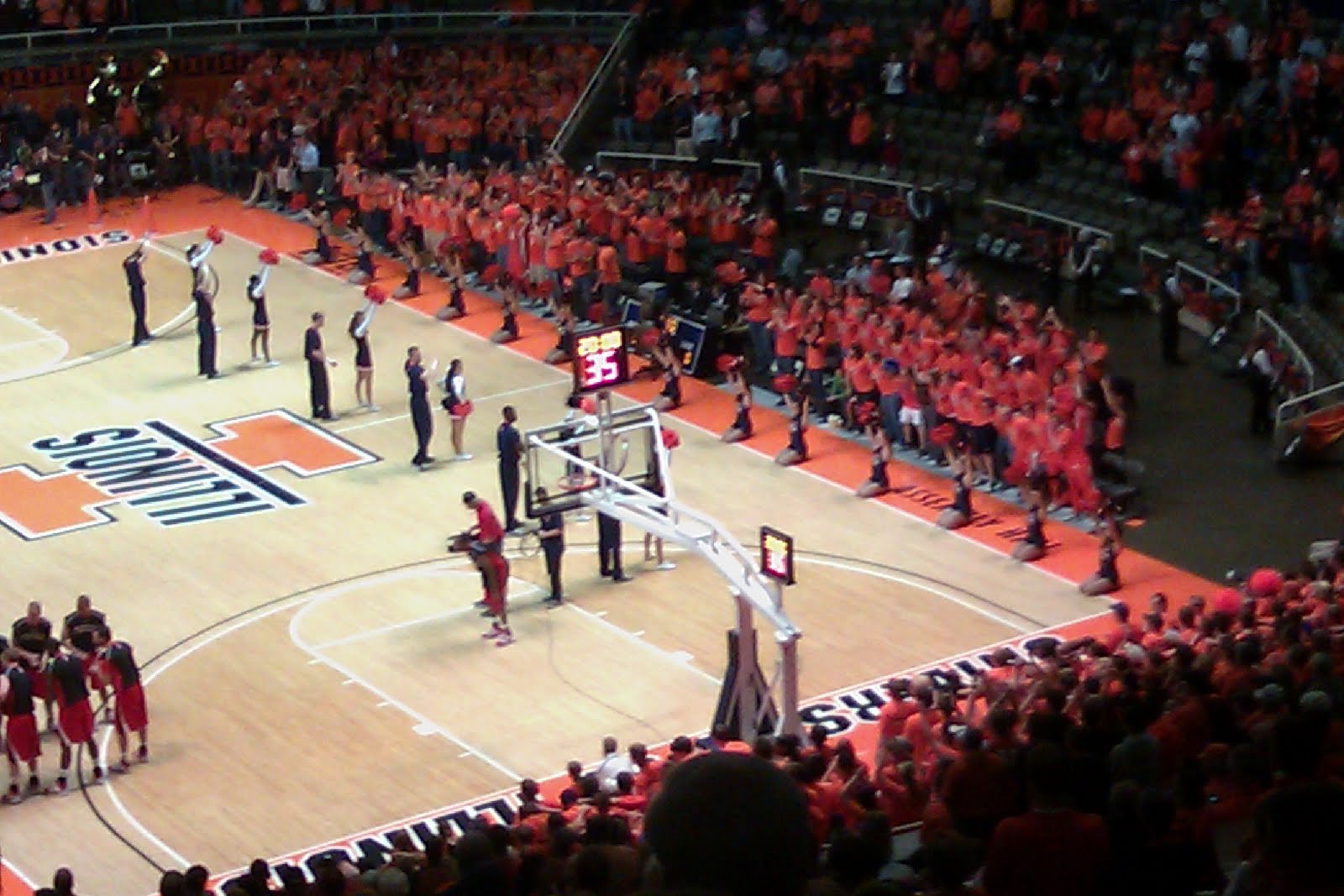 Picture of both of them, as they are right across the street from each other.

Microsoft also loves Boone Pickens Stadium.
For basketball it has to be Gallagher Iba Arena, the ?Madison Square Garden of the Plains?. Opened in 1938 and it still has the original white maple floor.

It also has a nice locker room. Wow, they are like siamese twins. I can see very similar campus architecture, I wonder if most land grant universities use that style of building.

Hope I get to visit Anfield before they build a new stadium and tear it down. I want to see Liverpool v. Everton home, and sit in the Kop. Might be a pipe dream, but I can't think of a more charged environment. 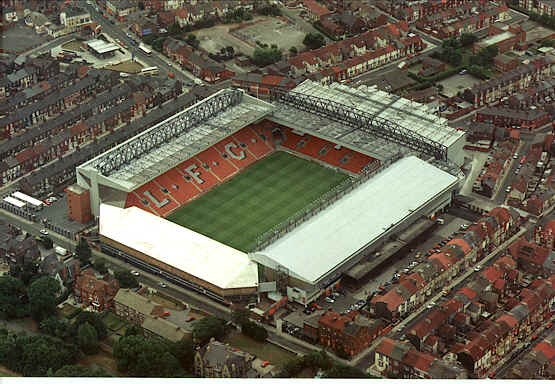 And that'll be all for now. I've already posted Neyland in the other thread.

Let me just slip the ol' Shoe in here, home of the Buckeyes.

And FedEx Field for the Redskins. 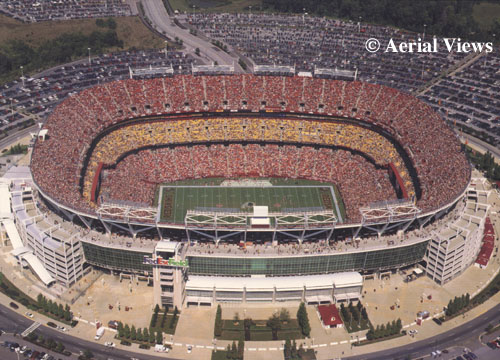 No particular reason. Just the history.

Eden Park, Auckland is one of my favorite grounds because I grew up by it. Home of the local Super 15 team and where Auckland plays its ITM Cup games, and hosts several All Blacks matches annually.

Also set up for cricket:

Other grounds I've been to (Westpac Stadium in Wellington, Waikato Stadium in Hamilton, and a few more rugby grounds around the north island) didn't really strike me as spectacular. Grounds that seem amazing to go to: SpitfireMK461 said:
Let me just slip the ol' Shoe in here, home of the Buckeyes.

I used to live in the building you can barely see in the lower left corner.

For me it's the history and the architecture that make the stadium great. The main entrance looks like something you would expect to see in an old library or railroad station.

Here's a representation of what it looked like in the 1920s. Some of the stadium's walls still show the imprints of the wooden planks they used to make the molds for the concrete that was poured 90 years ago. Jesse Owens used to compete on the track the stadium housed until the renovation in 2000.

Interestingly, as modern as the stadium is now, field lights need to be specially installed for night games.
Last edited: Mar 30, 2011

I like the BOK Center here in Tulsa and the Sprint Center in Kansas City. I work for BOK so that might impact my opinion... 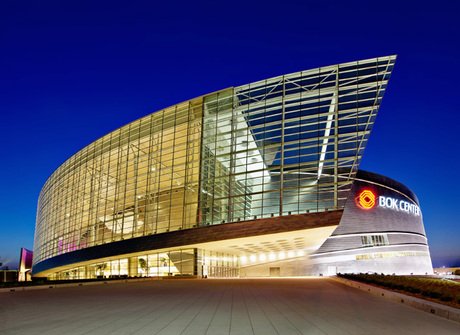 Westfalenstadion, Germany biggest stadium and home of Europe's (or even the world's) biggest standing room (for 25,000 people, more than some other Bundesliga stadiums have in total):

In the picture above you can see the predecessor, Stadion "Rote Erde", directly in front of it. Tiny little thing, only room for 25,000 people. I'm sure it will be the smallest in here, but

Wow, you guys have some great stadiums/arenas in the 'States... I'd love to check out that Ohio Stadium one day, because it's simply massive! Also I've never been to a match of any kind where a sellout crowd is all wearing the same colours, so that might be interesting lol. Interesting to note the differences in stadium designs too, I've never seen something like the Big House before... Nice posts.

We can't really compete on that level in terms of absolute size (only 5 stadiums in Aus are over 50,000 capacity) so I'll just have to talk up what we do have. It was posted before by Victoria but the Melbourne Cricket Ground (MCG) really is the Mecca for sports fans in Australia, and one of our world class venues. Opened in 1854, it is best known on the world scale as the centrepiece of the 1956 Olympics, 2006 Commonwealth Games, and various Cricket World Cups.

It's official capacity is 100,018, making it the largest stadium in Australia and also the Southern Hemisphere. It is home to a number of sporting teams, and this is represented by the 'Parade of Champions' outside the ground; a number of statues depicting some of our sporting champions. It is also home to the National Sporting Museum, interesting viewing for fans of any sport.

For night matches, the ground is serviced by 6 light towers standing at 75m (about 250 ft?) each. They usually stick a camera man up in one.

Hands down the greatest ballpark in existence. Nothing is better than taking a day off work in the summer, getting bleacher seats, and pouring on a solid drunk. Food is it's one shortcoming, as the Cell is better. The history and provenance of the field, the ivy and everything associated with the Cubs good and bad makes it truly the most special ballpark in the MLB.


Edit: Another awesome part is the rooftops, though not strictly a part of the stadium. Look at the first pic, those apartment buildings have roofs that can be rented for the games. You get a pretty decent view, no ticket price, and catered food. I've been to a few parties hosted by friends companies. Free food that is actually good, and unlimited beer make a deadly combination.
Last edited: Mar 30, 2011

RaptorJesus said:
Hands down the greatest ballpark in existence. Nothing is better than taking a day off work in the summer, getting bleacher seats, and pouring on a solid drunk. Food is it's one shortcoming, as the Cell is better. The history and provenance of the field, the ivy and everything associated with the Cubs good and bad makes it truly the most special ballpark in the MLB.
Click to expand...

How can a seemingly intelligent man be sooooo wrong. Fenway all day everyday.

The best seat in sports is sitting atop the Green Monster and taking in a Sox game.

Clockwerk said:
How can a seemingly intelligent man be sooooo wrong. Fenway all day everyday.

The best seat in sports is sitting atop the Green Monster and taking in a Sox game.