First Drive (with datalogging) and no seats

The datalogging was an attempt to track down the fault that was causing the terrible stumbling and misfiring you can see/hear in the WOT video. They'd gone away, though, because I'd tightened the alternator cable, which seems to have fixed everything for the moment.

What yesterday mostly consisted of was getting an inventory of what we have, and how things are currently set up. We didn't get to the suspension or electrical yet (both of which seem... Pretty bad) but we did cover the safety checklist: 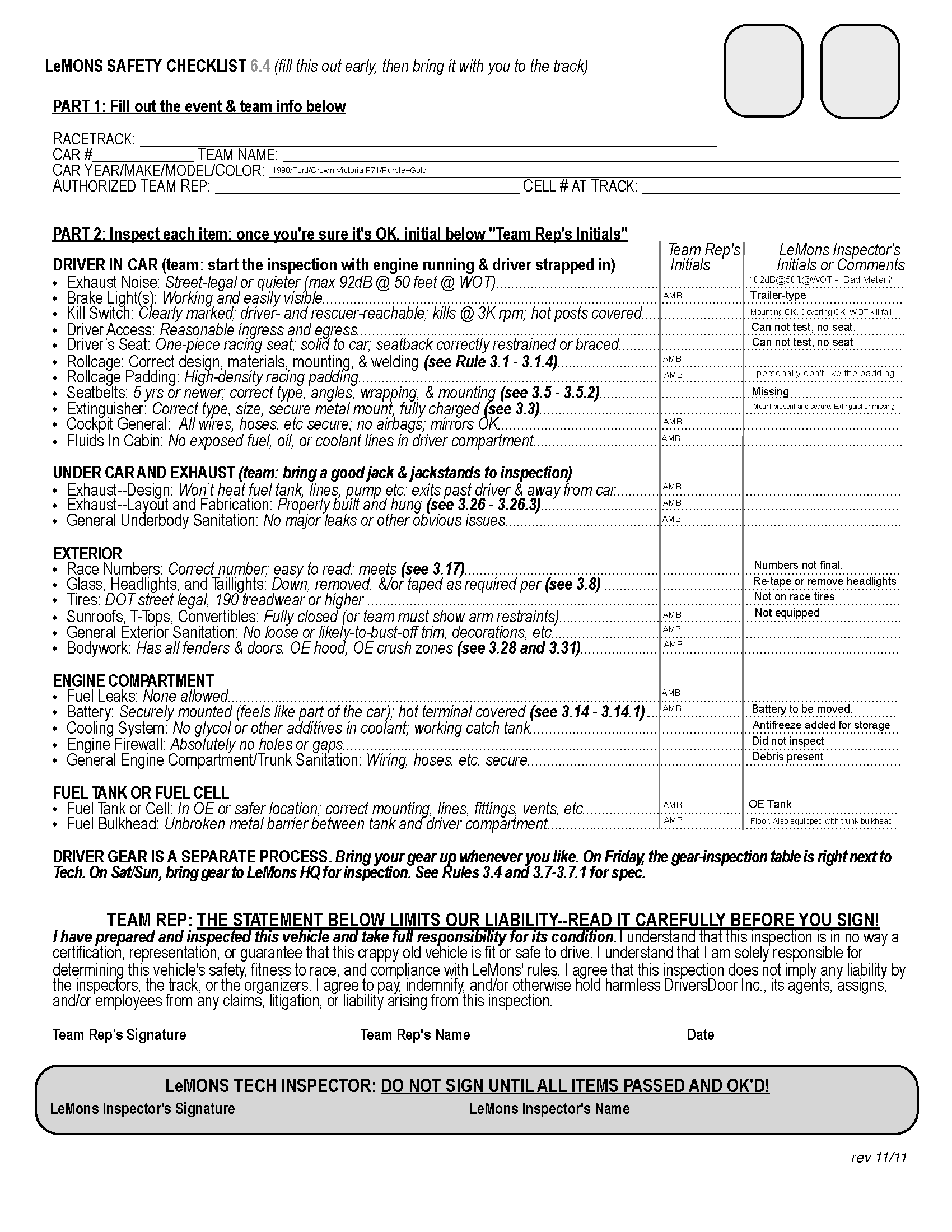 Most everything that needs to be taken care of on that list is an easy fix and is typical day-of-race stuff(except the seat, which will be interesting in several ways). The only truly worrying thing is that when I smacked the killswitch at the end of the WOT test video, the engine kept on running until I backed off the gas. The spec sheet only requires that the switch be tested at 3000RPM, but I intend to make it die at any revs. I didn't look at how it's wired currently, so I can't comment on why it acted as it did just yet.

Additionally, we have the following to-do list:
1) Brake fluid flush. It's black.
2) Cooling system overhaul and possible engine repair/replace (the engine has been run quite hot several times due to damage to the cooling fan). The current radiator fan is massively undersized and isn't properly held in place or shrouded.
3) Transmission swap. The car came with a spare, which needs to go in. The original will then be refurbished as a spare.
4) Three words: "Crown Victoria Superleggera"
5) Electrical refresh. Every wire I have looked at so far has some sort of splice or modification to it. Everything nonessential needs to go, and everything essential needs to be looked at.


This is the complete list of spares that we found in the car:
4 Spare wheels with various tires of dubious quality for racing but that look good for the street
1 Spare 4R70W transmission w/ torque converter, supposedly good
1 spare fuel rail w/ 4 injectors
A small pile of EGR related parts (WTF?)
A very large pile of brake pads worn in numerous interesting and massively incorrect ways
1 complete set of Wagner Severe Duty pads for this car, apparently unused
1 Haynes manual
1 caliper of unknown quality that's either a rear caliper for this car, or completely unrelated and random
Several million brown and rotting leaves.
1 Spare airbox w/ MAF and hole where the intake duct was sawzalled off (this hole matches the sawzalling in the airbox in the car)
1 Spare radiator of unknown provenance. Need to test it.

It is INCREDIBLY citrusy, and perhaps rather chumplike as well.
Last edited: Jan 9, 2012

DISASTER!
The goal for today was to check out the suspension and cooling system, and work on stripping more dashboard out.

Once my cohorts arrived, the first step (after towing the car with the Dakota) was to look at the washer bottle. It's full of ice. CRAP. Well, it shouldn't have been shocking. It was all of 20 degrees outside today, and we'd improvised a brazier from a sawzalled-in-half heating oil tank. New goal #1: Pull the water pump and make sure it hasn't been destroyed by running like that.

After a long and protracted battle to get the damned pulley off (note to self: You bought an impact wrench for a reason) and a lot of hammering and prying and heating of the pump body itself, this became evident: 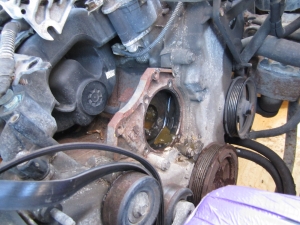 Yep, a slurry of the typcial engine block mud and ice

Inspection of the pump revealed that you could stall the impeller. Further inspection found this as the cause:

Thus started a mad scramble to remove EVERY cooling component and get it in the house.
Hoses needed to be headed to come off: 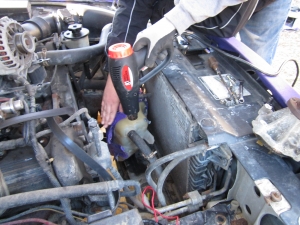 This process was not without causalties: 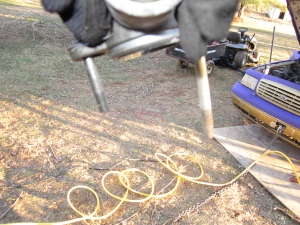 I think somebody in the past cross-threaded the thermostat housing bolt. The impact wrench went ahead and tore it straight in half.

The radiator was, of course, completely full of ice (miraculously, it doesn't seem to have broken)

Still to be determined is if the freeze plugs are still in place. The block appears intact.


We also removed about 10lbs more dashboard in support of operation Crown Victoria Superlegerra. There is still more to be removed.
Last edited: Jan 16, 2012

I'll be relocating out to the South Bend area so if you guys make it to Chicago OR Ohio, I'll be more than happy to lend a hand.

The Ohio race was canceled a few weeks ago, however there will be two races in Chicago this year instead of just one, the first is in June and the second in October.

Count me in if the team is going!
S

BTW, LMAO at the datalogging in a cornfield.

First Doug shows up and now you, makes me wonder exactly who else is keeping tabs on us.

Either way, welcome to the forums.
S

Thanks. I didn't even know Douggie Fresh was here!

Yeah he posted a couple times in our 2011 FGR thread, he actually didn't remember most of his drunken antics at CMP and it was my writeup that helped fill in the gaps.

So how long until Judge Phil starts posting here?

So the preliminary plans for this weekend:
1) Undo the broken bolt-stuck-in-block fiasco, hopefully without having to take off the intake and god willing without having to drill out the damned block.
2) If a water pump can be procured, reassemble the accessory drive.
3) Finish gutting the dash
4) One more test drive on the old transmission.
5) Drop out the transmission.
6) Start sorting out the wiring harness, pruning unnecessary branches and rerouting/extending wires as necessary to reach their new homes.

It's an ambitious timeline, for sure.

Before the last race, we suspected he and several others were keeping tabs on us, and it turned out to be true when they asked about us rebuilding the supercharger during our BS inspection. We never said anything about it outside of these forums, so the only way they could have known was if they had been following along or another team was and tipped them off. And because of that, I can't be quite as forthcoming with details as I have in the past, not that we have anything to hide, we just don't want to risk shooting ourselves in the foot.

So Judge Phil posted this yesterday, and you know that I can't keep my hands off anything 3800 related, especially if it's supercharged. Mechanically, this car is more or less identical to the LeSabre with the same shitty suspension and brake setup. But two things stood out to me, one is the boost gauge in the instrument cluster.

None of the later SC 3.8's came with one, so I'm more than a little surprised to see one here. While I'm sure it was there to help push the whole "High Performance Pontiac" image, I doubt many buyers even knew what the hell it was for, I can only assume its disappearance later on was a cost cutting measure.

Yeah there's the NINE different buttons used for controlling the seats, but it's the "Performance Shift" button that really caught my eye. The SC Series I only made 205hp, the Series II made the same in NA trim, and the 4t60e/hd transmissions in them were made from cheap glass and held together with used chewing gum. The idea of a performance mode in this car is just laughable considering the transaxle would go out with just normal driving. I can't really throw stones though because the GTP has one mounted on its shifter knob as well.

Good to see you guys/girls "getting the band back together" so to speak. I'm looking forward to seeing your progress on the GTP! Sadly it's too damn cold up here for working on cars right now so our ChumpCar is in hibernation.

BerserkerCatSplat said:
Good to see you guys/girls "getting the band back together" so to speak.
Click to expand...

I wouldn't say we're putting the band back together, we just needed to take a break after the last race went so poorly. It wasn't because we encountered problems (that's just part of the game), it's that we didn't have any fun while doing it which has always been our main goal. As for the Vic, that just sort of fell into our lap, but I'm glad it happened.

I'm looking forward to seeing your progress on the GTP!
Click to expand...

There's a few things going on behind the scenes that are taking precedent over the GTP repairs, but once those are out of the way, work will hopefully get back on track. We still haven't had any luck with finding a parts car, either the price is way too much ($1,800 for a car with 220k on the clock) or way too far away (1,000 mile round trip). We'll find one eventually, but it might take some time to find the right deal.

Sadly it's too damn cold up here for working on cars right now so our ChumpCar is in hibernation.
Click to expand...

Send some of that down here, we've had almost no snow this entire season.

BerserkerCatSplat said:
Good to see you guys/girls "getting the band back together" so to speak. I'm looking forward to seeing your progress on the GTP! Sadly it's too damn cold up here for working on cars right now so our ChumpCar is in hibernation.
Click to expand...

Ha, if my hired (with beer) help hadn't bitched out last weekend, the Vic would have gotten a transmission swamp in snow, ice and damn cold wind.

EyeMWing said:
Ha, if my hired (with beer) help hadn't bitched out last weekend, the Vic would have gotten a transmission swamp in snow, ice and damn cold wind.
Click to expand...

If the beer is anything like what you brought to CMP last year, no wonder they didn't show up.

I have a eight words for you:
Seventeen dollars for a four-pack of cans.