FinalGear Around the World Care Package!


Don't panic! I can answer your questions: Got a letter from the swiss postal service today: 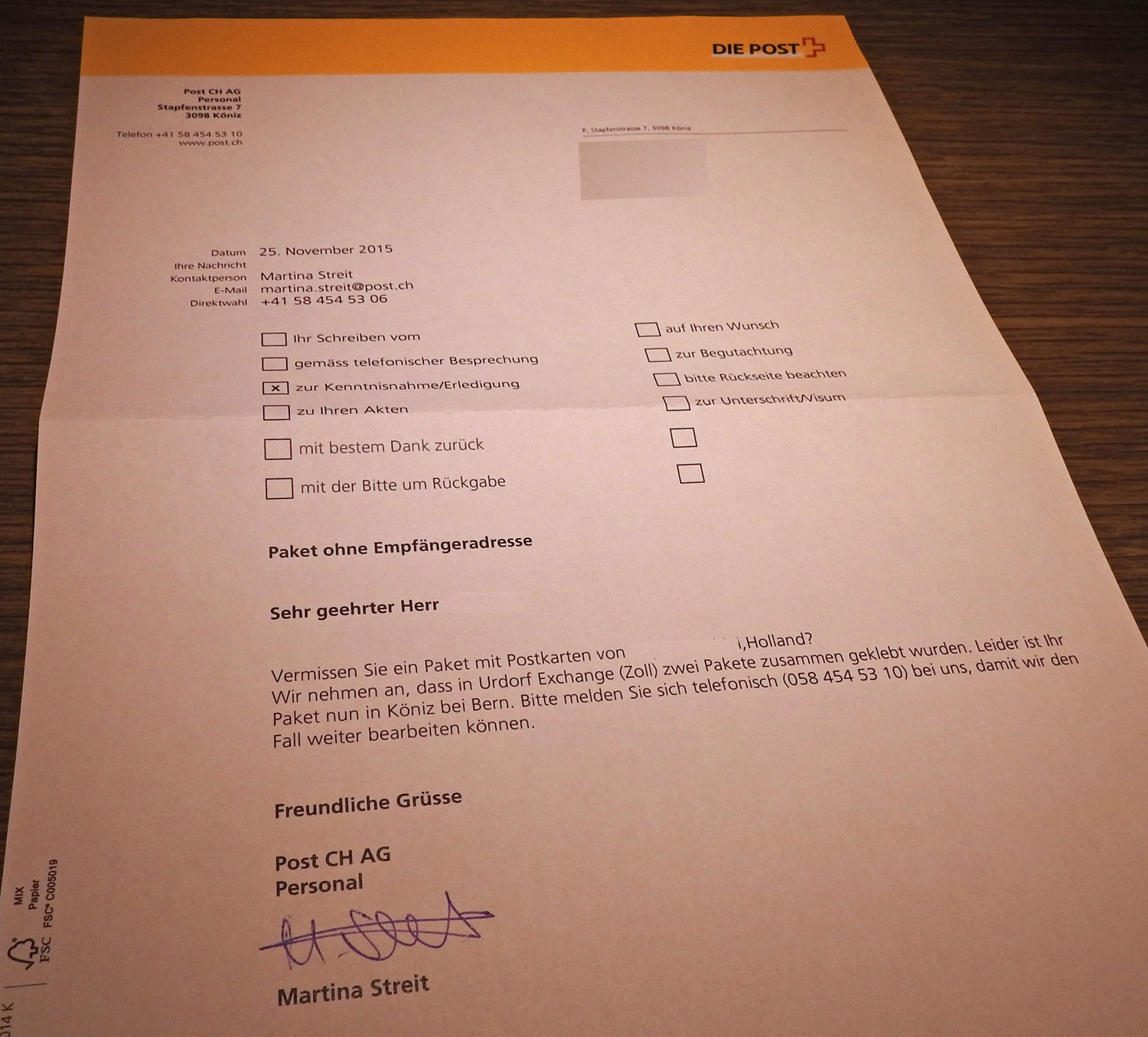 Translation:
Are you missing a parcel with postcards from (Adu), Holland?
We assume two parcels got stuck together at customs in Urdorf. Unfortunately your parcel is now in K?nitz, Bern (Switzerland).
Please call 058 454 53 10 so we can work further on the case.

I will call them tomorrow so they can send the package to me. :lol:

Really? After all this time travelling all over the world it gets lost in SWITZERLAND???
​

It's not lost, just re-routed.

I hope Ms. Streit is more helpful than her name suggests.

IceBone said:
Really? After all this time travelling all over the world it gets lost in SWITZERLAND???
Click to expand...

Of all the places where it could get lost, Switzerland has got to be the best. The German version of that letter would essentially have read "DILLIGAF?"

All that drama when it was in the US with the Euro people complaining about how slow it was moving along and now it's back over there and all your carriers seem to be slowing it down just as much if not moreso. :lol:
My car is Greener than your car.​

DanRoM said:
I hope Ms. Streit is more helpful than her name suggests.
Click to expand...

You have to love that name. "Suchen Sie Streit?"

Nabster said:
All that drama when it was in the US with the Euro people complaining about how slow it was moving along and now it's back over there and all your carriers seem to be slowing it down just as much if not moreso. :lol:
Click to expand...

The drama was caused by people receiving it, then disappearing off the face of the planet, not the package getting lost in the mail.
​

sorry about the cancer and the baby. it was totally my fault i didn't consult with you first.
When you say that we're all assholes,
Guess it'd be useless to deny
I'm just saying, you're the reason why

All that you could have done was post a single sentence in all the time you were actually posting on the forums, so don't go fucking pulling that excuse again. You can't justify not saying anything at all in here while you're posting in other sections of the forum.
​

I remember actually being worried about you, since you just disappeared off the planet and your activity latest kept changing.
​

i remember so much concern from you, with terms of endearment such as inconsiderate cunt and permanently shitlisted.
When you say that we're all assholes,
Guess it'd be useless to deny
I'm just saying, you're the reason why

Only when you told me to fuck off.

You keep telling yourself that. I know what happened to you was shitty, but it doesn't excuse you. I'm dropping it there.
​

ok, most important person in the universe.
When you say that we're all assholes,
Guess it'd be useless to deny
I'm just saying, you're the reason why

Shush you two.
We had enough of this the first time you "discussed" here.
Now let's move on.
Moths are just goth butterflies.​

After phone calls with the post centre in Berne it got the information that the package has reached them but with some content missing.
I told them to send the package to me anyway so I can initiate a missing report / complaint.

Finally got the package: 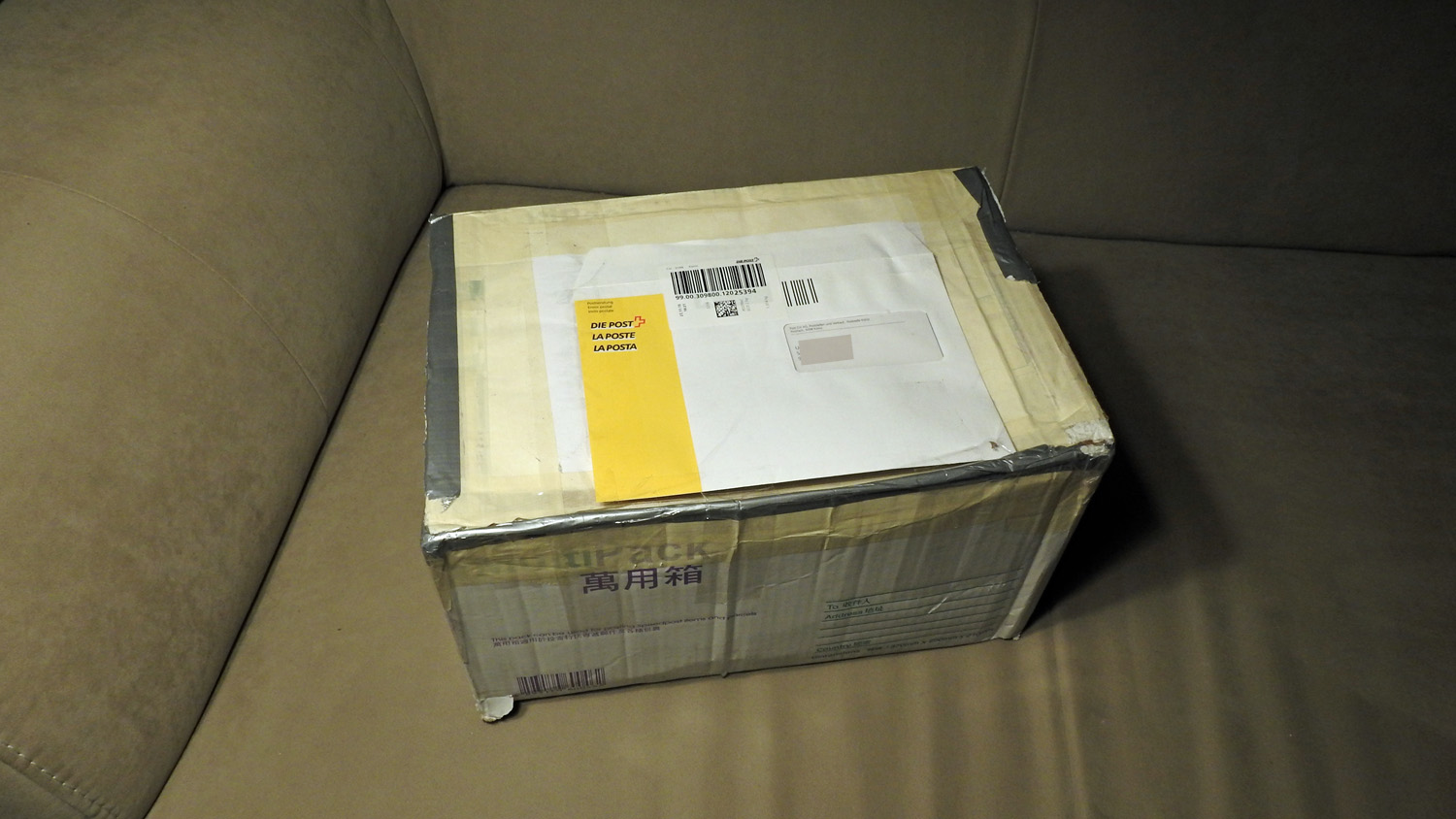 And with the package came a second letter: 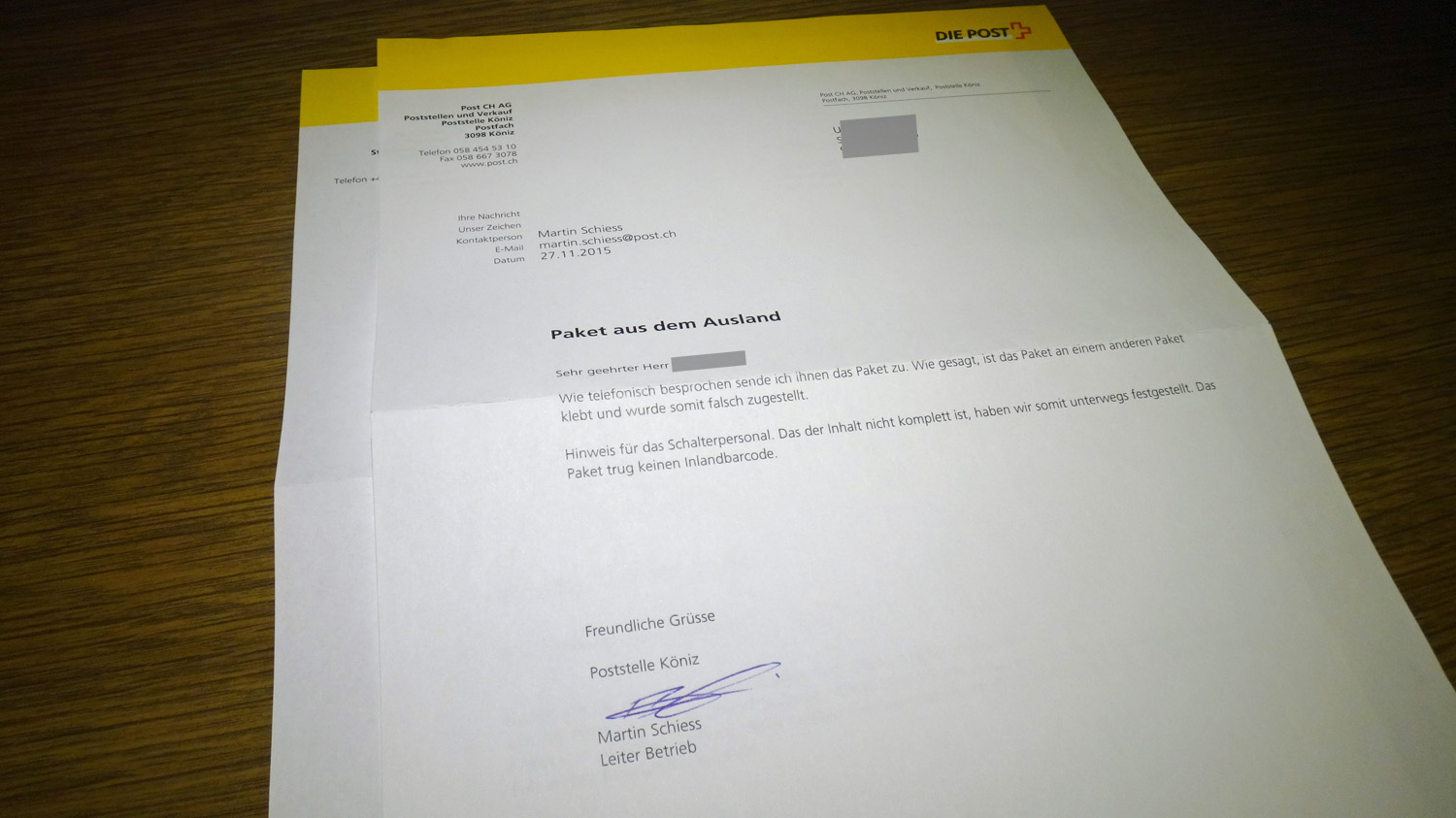 Translation:
As discussed by phone I have sent the package to you. As informed the package got stuck to another package and hence reached the wrong adress.
Information for the counter staff*: We detected the fact underway that the content isn't complete anymore.
The package had no national barcode.
*Counter staff of the post office in my town where I filed the missing report / complaint. 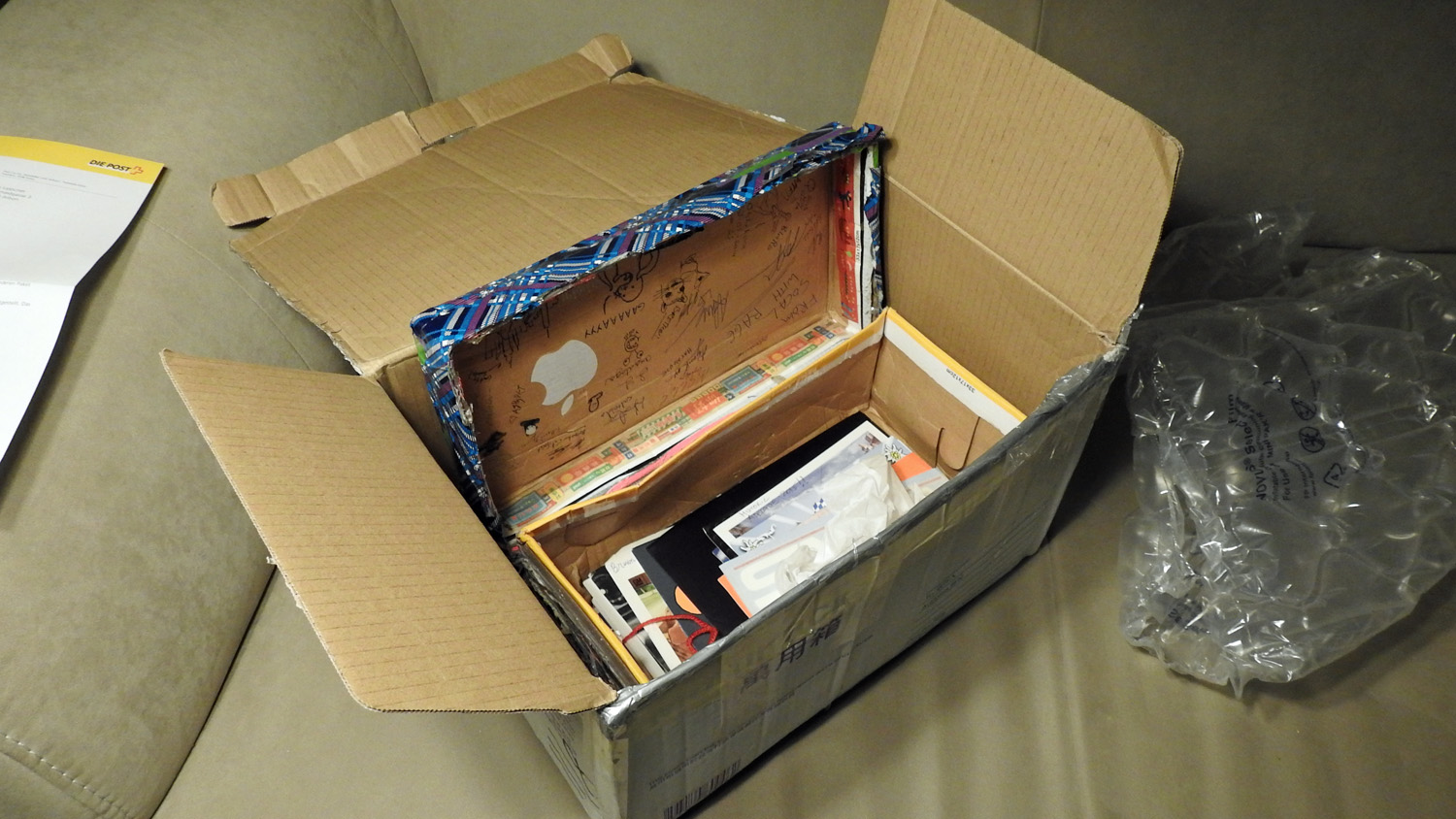 Note: The package has been sent by Adu from Holland with the models still accounted for, as a note from the Dutch costums confirms: 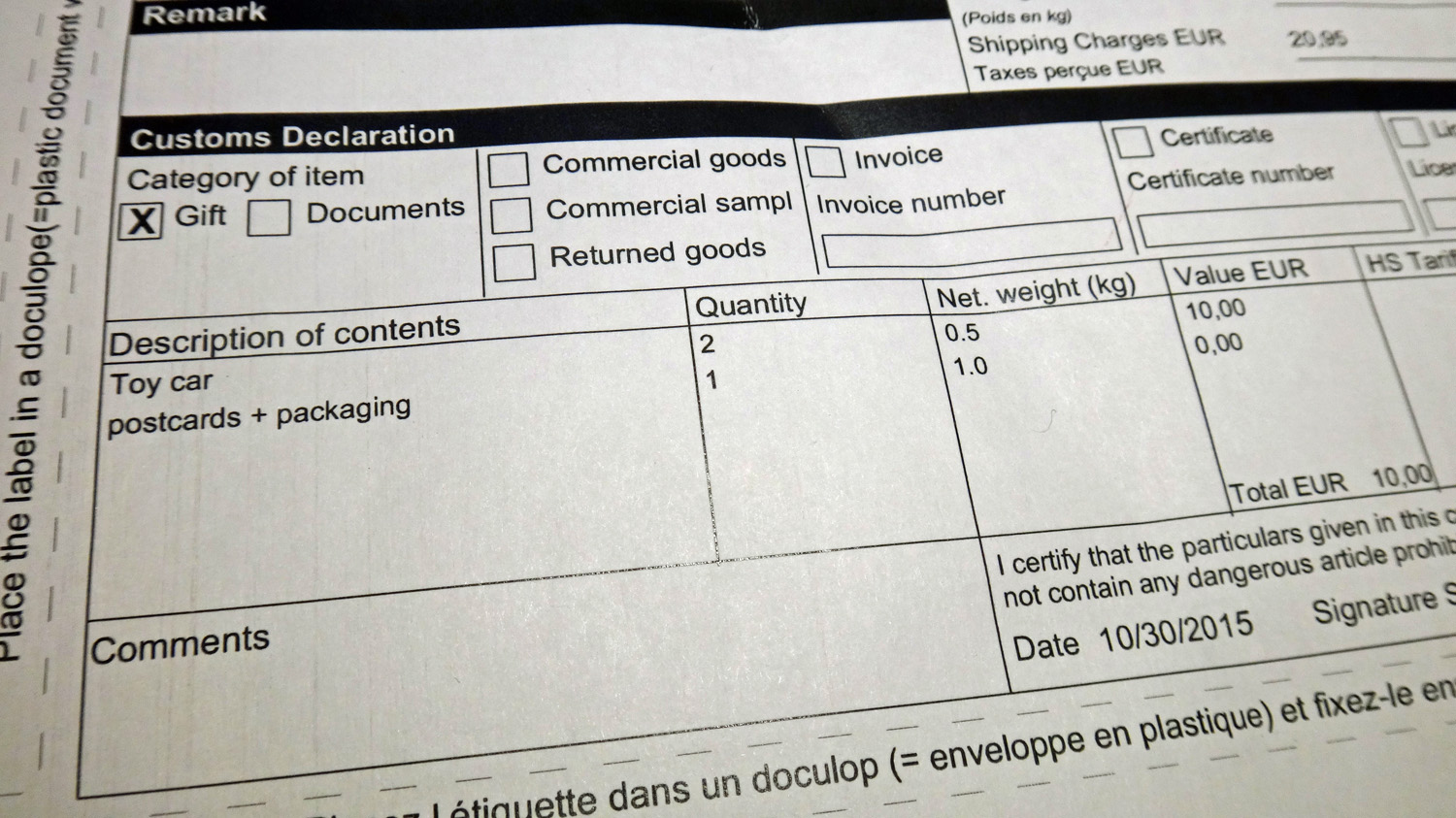 It's not clear at the moment where the content went missing, at the swiss costums, at the central post office in Berne, or (most likely) at the place where the package has been sent to wrongly.

Sad news. - But please hold your Internet wrath back until it's clear what really happend.

So possibly someone got the package by mistake and just took the cars?
Damn...
Moths are just goth butterflies.​

well shit... we've had a good run i guess