ScarFace88 said:
Have you tried deep fried turkey? I like it more than the usual baked turkey, as it's nowhere near as dry.
Click to expand...

I sous-vide my turkey. Breasts and legs cooked at different temperature. The key with turkey is that the breasts cook A LOT faster than you think (in other words, much faster than the legs).

We just skip turkey and make prime rib instead.

I got 8 cookbooks and 7 magazines (Lucky Peach) for Christmas, so after having them on the floor for several days I thought it was best to put them into my bookcase; Starting to get a little collection. I have 2 more books in my flat in the UK. One day the collection will meet wherever I move permanently.

I use the books just for culinary inspiration or gaining knowledge. I rarely cook any of the recipes.

Food people of FG... I'm looking for a curry-style powder that's strong in taste, but not insanely hot.
After seeing how much dad uses of the stuff they have, I figure he should get something different, more spicy.

For example I am intrigued by this: http://www.ingo-holland-shop.de/Gewuerze/Gewuerzmischungen/Curry-Goa.html
I could buy that locally, but that's the smallest package... thoughts?

Looking at the ingredient list, that should certainly do the job. If it doesn't, you could also blend your own?

Just had a thing called Turkish pizza kebab. It was the saltiest thing I've ever eaten and I once ate a heaping bowl of salt...
​

Homemade (except for the fries) poutine with leftover turkey from the Christmas dinner: 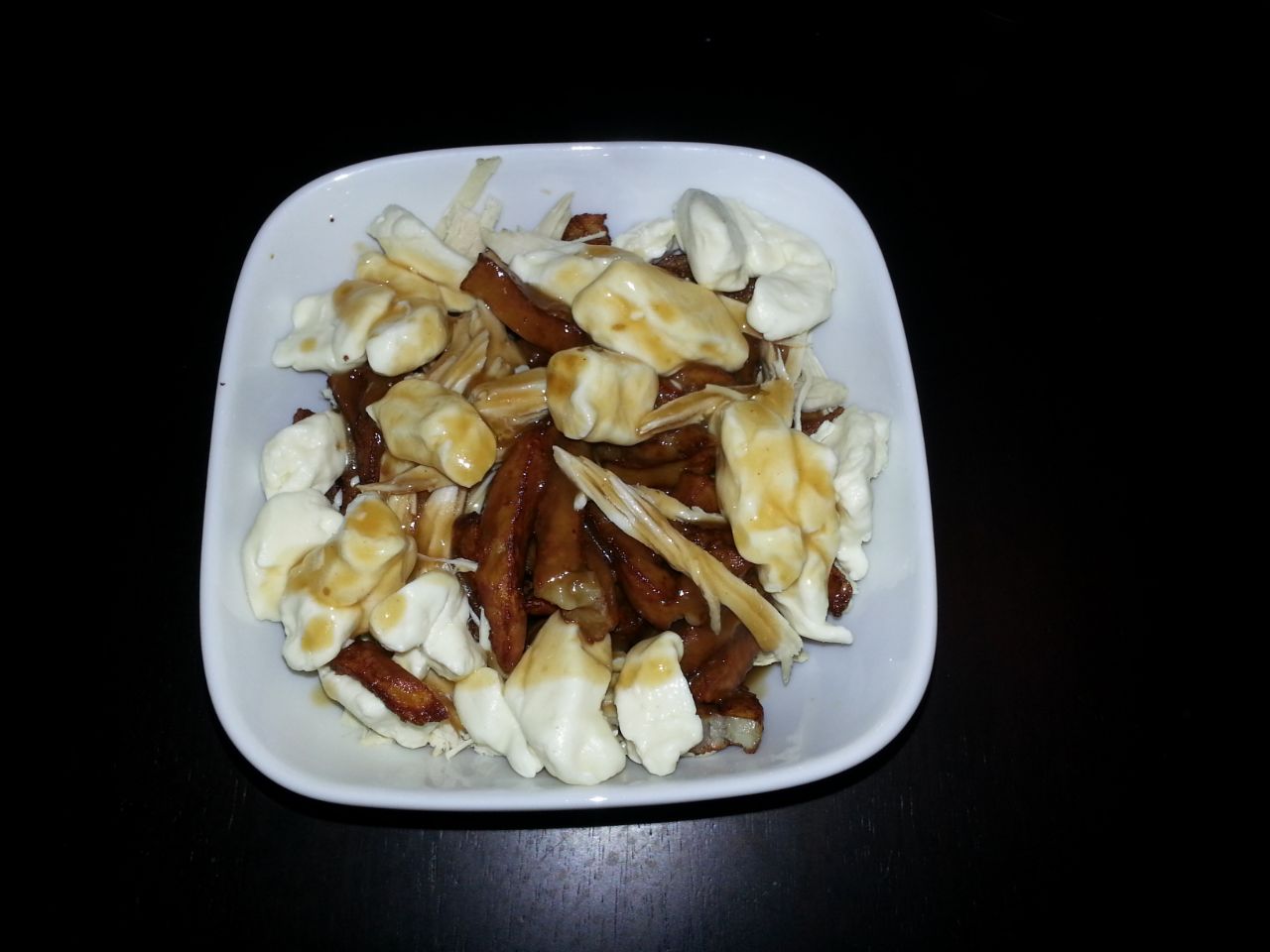 Delicious, but the sauce (St-Hubert poutine sauce) was a bit too salty.
- Alright you Primitive Screwheads, listen up! You see this? This... is my BOOMSTICK!

jibduh said:
Looking at the ingredient list, that should certainly do the job. If it doesn't, you could also blend your own?
Click to expand...

I think laziness prevents that :lol: I'll go investigate how much they still have, I recall there may be a large bag somewhere used to refill...

narf said:
I think laziness prevents that :lol: I'll go investigate how much they still have, I recall there may be a large bag somewhere used to refill...
Click to expand...

Remember that you don't really want to keep spices for more than 1/2 -> 1 year, as they after then will begin to lose flavour and aroma.

ahpadt said:
Remember that you don't really want to keep spices for more than 1/2 -> 1 year, as they after then will begin to lose flavour and aroma.
Click to expand...

Yeah, I heard that somewhere... which may contribute to him taking piles of the stuff, I have no idea how old that is.

As potency declines, you add MOAR spice! mrwf... the dustiness! It's like eating handfuls of wood shavings!

If you don't know how old some of your spices are, chuck 'em... It may seem uneconomic, but your dishes won't be great using old spices; they will be grainy because you have to add a lot more.

Just smelling them is often enough to determine whether they are ready for the bin. It's best to keep spices in air tight containers and away from direct sunlight. The latter being the most important.

I will discreetly dispose of as much as I can, and sneakily buy replacement gifts "just in time"

I'm glad I didn't go for the really hot version!

Makes a world of difference compared to the old crap.
Last edited: Jan 4, 2014

I like to buy a mild or medium spiced curry powder, so that I can add chili afterwards to the strength I want.

Italy Unpacked - Series 2 - 1. In the Footsteps of the Poets - BBC iPlayer


BBC iPlayer said:
Beginning in Liguria, a region bordered by mountains and a beautiful rocky coastline which inspired the English Romantic poets, Andrew Graham-Dixon and Giorgio Locatelli travel along the west coast of Italy, exploring the culture and cuisine of the diverse regions.

Their first stop is the city of Genoa, once a great maritime republic, whose former glory is reflected it its opulent Baroque palaces with their imposing facades, glamorous decor and splendid paintings by artists such as van Dyck and Bernardo Strozzi. In contrast to these grand statements of wealth, Giorgio makes the simple dish that the city is famous for - pesto alla genovese.

The two travellers then move on to the Cinque Terre, a rugged portion of coastline featuring a national park and five picturesque villages seemingly wedged into the cliff face beside sea.

Finally, Andrew and Giorgio cross over into Tuscany and, managing to stay off the tourist trail, visit a hidden gem of Renaissance art in Pistoia and one of Pisa's best-kept secrets. They finish back by the sea at the port city of Livorno, where the fishermen's catch of the day dictates the menu.

(It's on iPlayer so you'll need to do some magic or find it elsewhere on the Internet.)

I remember that show. I'll get hold of it in a couple of weeks.

I need to work on my measuring...

narf said:
I need to work on my measuring...

"You can always add, but never take away"

Add little by little and taste between each time. Remember that the flavour will also change depending on if you put it in at the beginning of the cooking or at the end.

You can also add enough of the rest of the ingredients to make up for the over add. Ratios FTW! ...until you have a kitchen full of food and a desire for variety.