"See it in premium Large Format"

I think I'll take them up on that offer.
My car is Greener than your car.​

New trailer is up!

It left out the best part.


When Ford cries...
"I wish for an America that matches the marketing materials.” - @HardcoreHistory

Some people are being nitpicky about wrong cars in the background and such, yet they don't even manage to post in the proper thread for a movie that for this forum clearly has more singificance than just a passing mention in a general movie thread.

So I'll just quote these posts into here before making my own comments.

Certainly a good racing film, and a great men's film. And most importantly, as @_Jules_ put it, "a racing movie that's not about chavs".

So let's start with the good:
But there's also the bad:
Final verdict from my end is something like 7/10 - good movie, certainly not great movie. It's not as bad as the "Days of Thunder, but Sixties" comparisons floating around makes you believe, but it does not deliver the same emotional connection to the drivers and their motivations "Rush" did (see spoiler above).
Click to expand...

MWF said:
I'd say it is on a par with Rush. The problem I had with that film was the glaring errors in the movie, particularly with the vehicles, which since it was aimed at least in part to petrol heads you would think they would have got right.


1. Renault 5 and MkII Transit in a scene set in 1972.
2. UK registered MkII Cortina in a scene supposedly at Watkins Glenn.
3. Hunt talking on the phone about a drive during the closed season, when it's clear mid summer outside the window.

There are others, those are just what I remember since it's been a while since I last watched.

The period detail in Le Mans 66 is a great deal better, and I personally didn't spot any cars that were out of the time period.
Click to expand...

Ken Miles died behind the wheel of the radical "J-Car" prototype, which looks like this: 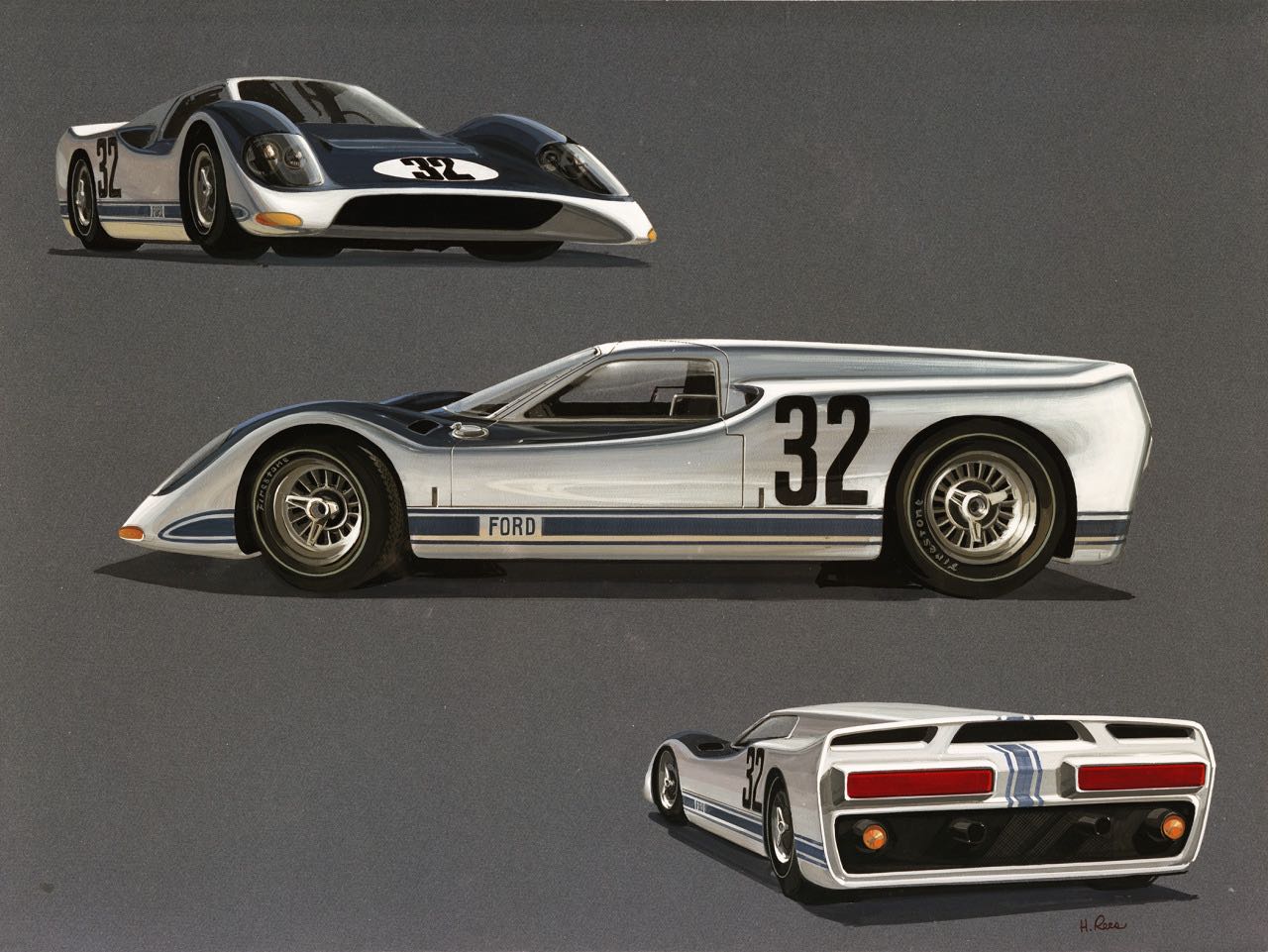 While the dialogue references the "honeycomb" material used (incorrectly credits it to Miles, though) the car he is is shown driving clearly is a bog standard GT40.

I can understand the production side decision not to build a replica of a prototype only nerds know about for 20 seconds of screen time, but if we are nitpicking, this is much more significant than some wrong model year background cars...
Click to expand...

MWF said:
Well you just vindicated the decision with what you said.


Also Bales accent for the character of Miles was not only incorrect, it managed to travel from London's East End to the Yorkshire Dales via Birmingham, Staffordshire and Lancashire!!

In reality he was actually quite "posh", well spoken mid 1950s British as this video shows


I appreciate they made him sound more working class to fit in with the character being portrayed, but an actor of Bale's calibre should be able to pick one accent and stick to it.
Click to expand...

I think it is a good racing movie, but that's not what it really is. It's a movie about Ken Miles, clearly an almost forgotten hero of the racing world. And Christian Bale did a spectacular job portraying him - even though I'm sure his supposedly British accent sounds horrendous to actual Brits , as @MWF already confirmed.
Matt Damon was also great as Carroll Shelby. Everyone else was just staffage, really.
The racing scenes were great for the most part. @Dr_Grip mentioned what I didn't notice on my own: The reduction of the point of view to the two main characters. Any other movie would have made a great spectacle out of f.e. the crash shortly after the start of the Le Mans race, but here it was shown literally only in passing. And as all the other action, without repeating the same thing five times in slow motion from different angles. This was a very welcome change from modern action movies.
The one thing I didn't like about the racing scenes was the "push the throttle gently all the way down" close-up used repeatedly (!) to indicate that now Miles gets serious. As if a race car on a straight wasn't driven with the pedal to the metal anyway.

I got some serious chuckles from Shelby's cheating, or at least ignoble tactics against Ferrari at the race. Being used to today's racing world, the thought of a team boss casually strolling into another team's pit and stealing things is highly amusing.

The non-racing scenes were all played very good too. Some things were clearly dramatization, but I can understand that. Even the son being at the workshop and the test track often. Clearly we only saw a small portion of the work, which also clearly wasn't a 9-5 job, and given the openness of the scene back then, I can accept that a boy of that age uses every opportunity to see his father at such a "hero" job.

Going back to the movie title, I think both the US and the international title are grossly misleading. With the spin the plot takes, it should be named "Racers vs. Bean Counters". Ferrari is placed in the movie to kick off the plot, and it somehow leads to Le Mans, but the main conflict is Shelby vs. that jerk in the suit, with Miles being the undeserved butt monkey of that duel.

In comparison with other racing movies, both "Rush" and Steve McQueen's "Le Mans" were better, in totally different ways. I still give this a 8.5/10, bordering on 9/10.

There's a documentary by Adam Carolla on Netflix called "The 24 Hour War" about Le Mans in the 60s, highly recommended...
Battered and weary after the craziness of the 1960s, the self-righteousness of the 1970s and the greed of the 1980s, I want to go home again, oh, so desperately - home to that land of drive-in restaurants and Chevy Bel-Airs, making out and rock 'n' roll and drag races and Studebakers, Elvis and James Dean and black leather jackets. Not that I ever owned a black leather jacket.
(Roger Ebert)

DanRoM said:
Christian Bale did a spectacular job portraying him - even though I'm sure his supposedly British accent sounds horrendous to actual Brits
Click to expand...

But isn't he...like...British?
Or was he doing the "wrong" British accent?
Moths are just goth butterflies.​

Yes he is. Welsh, too be precise... and I didn't even know that until now. Oops.

Our Northwestern Germans, from @DanRoM or @shad_68 all the way to @MacGuffin @Eye-Q and me, would certainly have challenges to give a good impression of Walter Röhrl's Bavarian-colored speech patterns, even though we all are German. So being a Welshman not really helped him I guess.
Battered and weary after the craziness of the 1960s, the self-righteousness of the 1970s and the greed of the 1980s, I want to go home again, oh, so desperately - home to that land of drive-in restaurants and Chevy Bel-Airs, making out and rock 'n' roll and drag races and Studebakers, Elvis and James Dean and black leather jackets. Not that I ever owned a black leather jacket.
(Roger Ebert)

Redliner said:
But isn't he...like...British?
Or was he doing the "wrong" British accent?
Click to expand...

It wasn't wrong exactly, it was just inconsistent. Hard for a non-Brit to fathom completely, but we have such a variety of accents in the UK that there can be distinct accents in places just 5km apart as there was where I grew up. Bales accent travelled around much of England during the course of the movie. I found it rather amusing.
WillDAQ: To use the technical terms: "the Mustang is to aerodynamics what horse shit is to fine dining"

Dr_Grip said:
Our Northwestern Germans, from @DanRoM or @shad_68 all the way to @MacGuffin @Eye-Q and me, would certainly have challenges to give a good impression of Walter Röhrl's Bavarian-colored speech patterns, even though we all are German. So being a Welshman not really helped him I guess.
Click to expand...

Fair point.
Evey time someone tries to imitate the particular accent of this part of the country and does a poor job, I dislike it, so I fully understand.
Moths are just goth butterflies.​
B