thevictor390 said:
I wouldn't take that at face value just yet, sure the controllers won't work, but game-specific accessories can still be made to work.
Click to expand...

That's how I read it too, and it's no surprise really that they're using different wireless technology. I don't think the Fanatec kit will ever work through USB but as I said before it should at least be possible to offer upgrade kits for existing wheels. Maybe a box that handles the new wireless tech and a USB port for the wheel.

thevictor390 said:
There is no technical reason why something like a steering wheel would not be compatible. The game has to be designed to support it no matter what platform it is on. If the Forza 4 wheels don't work, it will be intentional.
Click to expand...

M3lover said:
Sounds like anything else than MS gear is a no go:

I am watching this very closely...
Moths are just goth butterflies.​

Microsoft is taking it too far with the greed, I think....hope....they take a huge loss because of it.

The last two items are a total dealbreaker for me. And without FM5, there is not a chance in hell of me buying an X-bone.

Was really hoping for this:

No reason why they shouldn't be adding weather and night racing this far in to the series. I think it's a deal breaker for me too, I'll keep the cash and spend it on my PC. Assetto Corsa already has these two items in development.

Especially weird not to include at least night since Horizon had night.
F

The last two items are a total dealbreaker for me. And without FM5, there is not a chance in hell of me buying an X-bone.
]
Click to expand...

It's probably the two most significant features they could add to the series at this point. I wish they'd take a bit longer between each release and do it properly instead.

Buba said:
Wow... Fuck this game and system if my Fanatec wheel and CS pedals won't work with it...
Click to expand...

Yeah that's the nail in the coffin for me in regards to Xbox One. What a shit console and it hasn't even been released yet...

Bit of a dead thread...but some news was released yesterday: 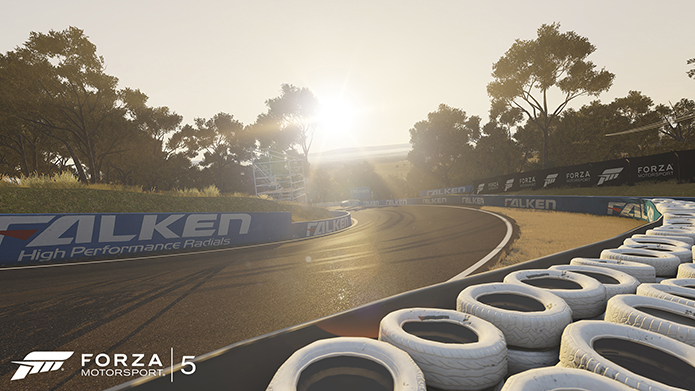 Bathurst is in the game for the first time! (Technically the 2nd time, but "Blue Mountain" in Forza 1 was unlicensed and changed a bit.)

Just noticed Spa was in it. And I thought that any Logitech G-Series wheels would work with XBOX One also. I'm praying they do

Just noticed Spa was in it. And I thought that any Logitech G-Series wheels would work with XBOX One also. Hope things work out

Here is the link to the current cars being offered (most of them are already in Forza 4, but here are the cars with photos to confirm them):

Turn 10 says their vision for the new Forza is quality over quantity. And while they've included the incredible Mount Panorama from Australian V8 Supercars, they've left out Infineon Raceway (aka Sears Point), Japan's Suzuka Circuit, and, most surprisingly, the Nurburgring Nordschliefe. There are just 14 tracks available when its released, with the possibility that more will be added later through paid downloads.P

They've also pared down the 500 car selection to just 200 cars. They do have the McLaren P1 and the LaFerrari, but the LaFerrari will be a paid download from day one, to the consternation of many.P

Is this a tactical error on the part of Turn 10, especially with the upcoming release of Gran Turismo 6 on the PS3, which has 1,197 cars and 39 circuits? Granted, a lot of the stuff in GT6 has roots in Gran Turismo days gone by, while Forza 5 is a ground up effort for the first of the next gensystems.1P

Even if Forza 5 has more quality, GT6 sure has a lot of quantity to make up for it.

300 cars less than the predecessor? No iconic race tracks? Paid DLC from day one? Thanks but no thanks.
Nurburgring was 1 of the 2 tracks I had most fun on and played most (other was Laguna Seca).
Last edited: Nov 8, 2013

300 cars less than the predecessor? No iconic race tracks? Paid DLC from day one? Thanks but no thanks.
Nurburgring was 1 of the 2 tracks I had most fun on and played most (other was Laguna Seca).
Click to expand...

The other complaints are legitimate, but this one doesn't compute for me if you're comparing 5 to 4. Forza 4 did the exact same thing, with an American Muscle pack available on day 1 to people who bought a Season Pass for DLC.

The lack of the ring absolutely killed it for me. I have no reason to get an xbox one now. I'll be getting a PS4 and GT6 now.
2013 Subaru BRZ. #Handling
2004 GMC Yukon. #TowRig and #Daily

Its only coming to the PS3

Archie411 said:
Its only coming to the PS3
Click to expand...

300 cars less than the predecessor? No iconic race tracks? Paid DLC from day one? Thanks but no thanks.
Nurburgring was 1 of the 2 tracks I had most fun on and played most (other was Laguna Seca).
Click to expand...

no iconic race tracks? depends on your view point but mount panorama certainly is. I personally prefer cars done right rather than say I dunno HD and non HD cars
My car is dark grey not black!