I’ve decided on the next car! More info and thread to come as soon as I have more details (delivery date etc). Mate of mine was quoted 7 months and got a call that it was already here 6 weeks later, so I guess nobody knows when it’ll be here, including the dealer
Last edited: Nov 13, 2021

It's the thicc Golf, isn't it?

93Flareside said:
It's the thicc Golf, isn't it?
Click to expand...

Nope! It’ll be its brother from another mother/manufacturer. More news on specs and delivery date. I even have a nickname already lined up 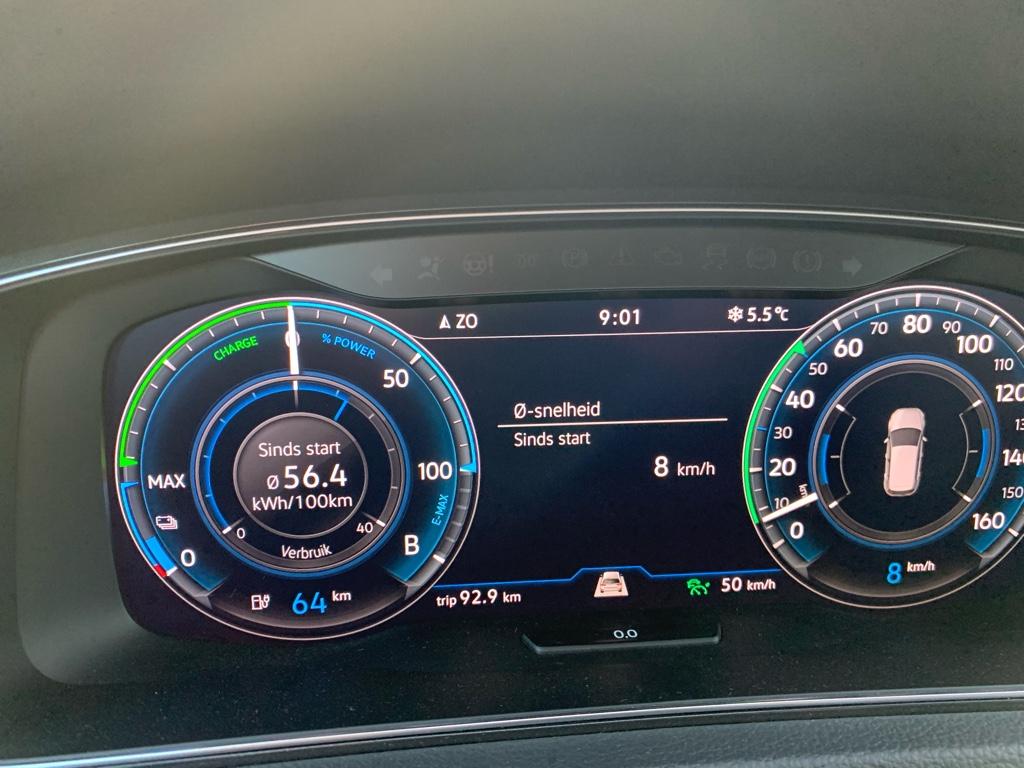 What’s wrong with this picture?

You seem to have a heavy foot?

I think your ver is bruiken

Dingdingding. Standing still uses energy for the heater but does not add kms, hence the ridiculously high consumption. Range is pretty shit too, but temperature may be the cause of that. Getting 160-170kms at max now

Now that is interesting because it gives me real life numbers I can work with that are better than any actual test I've seen around.

Over the years I have made a conscientious effort to calculate my average speed across fuel tanks (I'm great at parties). It is rather distressing for me to find that it has basically remained at more or less 8-9 MPH (12-14 kmh) since I have kept records. All of that on a hilly and very dense city with loads and loads of traffic. The density will work out on my favor on this one.

At 56.4 kw/h per 100 km. Assuming that his use of the heater will be more or less equivalent to my use of AC and that the slightly higher speed would actually benefit my EV consumption enough to offset the hills, I would run out a base (40kWh) Nissan Leaf in About 71km. A bit disappointing. Though my average of 16.6km a day still means I would get four days on a charge in ideal conditions. A Tesla with a 100Kwh battery would manage about 178km or a realistic 10 days ( I do things other than commuting).


I still wouldn't like to own an EV, but I do find the maths behind them fascinating from the sidelines.

for the record, the worst i've ever seen over more than say a 5 km stretch was some 40 kWh/100km. that was heading out of the office and hitting first traffic, then the jam in like 2 minutes and being stuck in there for about 45 minutes for a total of less than 7 km (so similar average speed). your average is already more than 50% faster, so the average consumption would probably also drop by 1/3

Yeah, the 56 kWh/100km is definitely not indicative of typical consumption in traffic. I've never really seen over 30-35 even in the worst of jams in the winter. My average always rises in the winter from "normal" 18-19 to 20-21, but that's about it.

The worst I've ever seen in any conditions was 75, but that was a fast-ish Ring lap, so doesn't count

I like the man maths going on here, but believe me when I say it’s utter horse shit. It is entirely down to temperature/heater and not car efficiency. The same stretch of road that speed with 20 degrees outside would probably give me one of the lowest consumption I’ve ever recorded like 11 kwh/100km

The worst I’ve ever seen on my car was 99kwh/100 kms during a particularly cold morning, where I had forgotten to activate the preheat functionality, and sat in a frozen car for a few minutes while the heater warmed up the interior and the defrosters unfroze the windows and mirrors. As soon as I moved, the consumption dropped dramatically.

I’ve never gotten any worse than 25kwh/100 kms on a ‘normal’ trip, and that was doing only motorway stuff at -10 and snowing. And in summer, traffic jams hardly use any electricity at all since the heater doesn’t need to work at all.

If I had to guess the heater uses something between 2 and 5 kw in cold weather, which is a lot considering the battery size of the Golf. The thing to do is to preheat the car before (costing you like the 10 kms of range max, which is roughly 5% battery in the Golf) to do the preheating before setting off.

It is also because of this that I want a heatpump in my next car. Will be doing more miles and longer journeys so I may need the extra bit of range it gives. 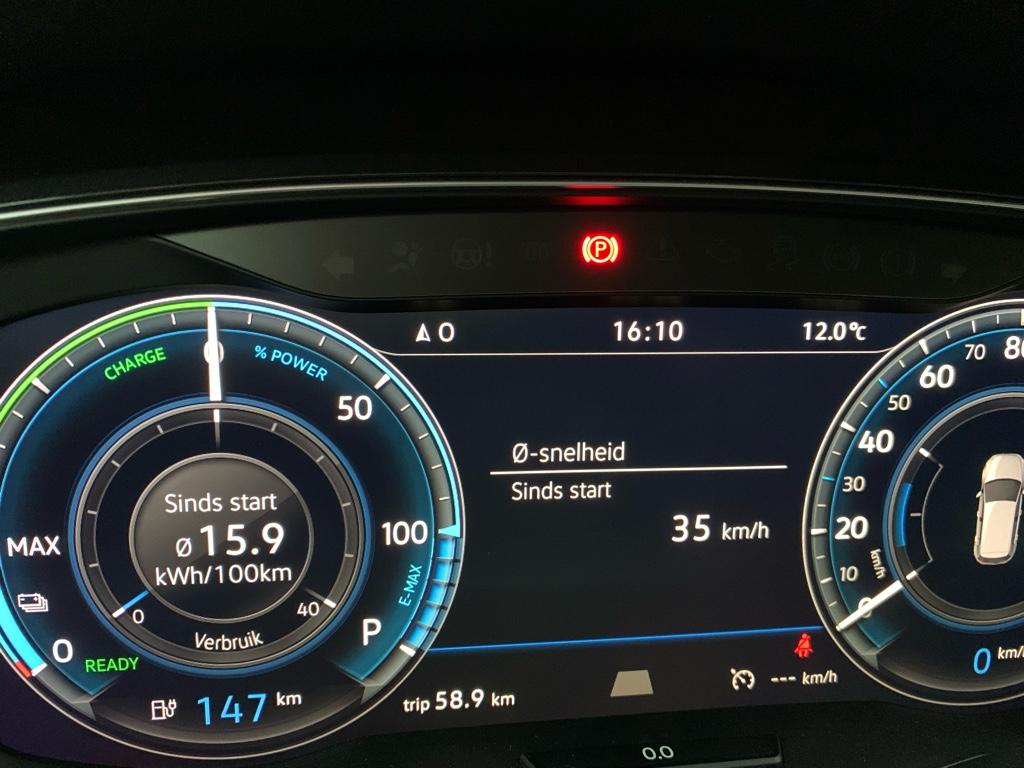 Here’s a more normal consumption/average speed for your calculating/is an EV for me needs.

Yes, it is a bit warmer now, but not a lot I can do about that…

So the heater in an EV, that's just like a normal electric heater at home right? Only it runs of the battery? What happens to the heat generated by the electrical motor? Is that used in any way?
"It's not right, this." : Anonymous studio tech on the killing of TopGear.

yes, it’s either a resistive heater (1 kWh electricity = 1 kWh heat) or a heat pump (1 kWh el = 3 kWh heat, roughly) - so the same systems you’d use at home.
Motor waste heat, Short answer: it depends.
teslas specifically switch the motors to a more wasteful operation to generate heat for the battery to precondition that for a fast charge, as an example. In the old (eg mine) models it’s not used for cabin heat afaik. The newer models do recycle heat around between a lot of (if not all) heat generators/users. I would imagine a lot of the early model EVs especially to just dump the motor waste heat, which despite the high efficiency is still a lot. At 90% efficiency and 15kWh/100km that‘d be roughly 1500W lost - pretty much exactly what the heater in my car uses on a cold day once the car is at temperature (and to keep it there).

Thank you for the answer, I've been around large industrial electrical motors all my working life, sure those in an EV are more efficient but damn, such heat, seems like a waste not to use it really.
"It's not right, this." : Anonymous studio tech on the killing of TopGear.

Iirc the Golf doesn’t do heat scavenging so it just loses its heat. I’ve had the bonnet open after a long highway drive but didn’t notice any heat, engine was still cool to the touch… so I doubt it would be enough heat to warm the cabin in any meaningful way

NooDle said:
I’ve never gotten any worse than 25kwh/100 kms on a ‘normal’ trip, and that was doing only motorway stuff at -10 and snowing. And in summer, traffic jams hardly use any electricity at all since the heater doesn’t need to work at all.
Click to expand...

But the AC does, and my equivalent of -10 and snowing is "35 and 70% humidity". I have to imagine the AC compressor will have an uphill battle with that.

AC is actually surprisingly efficient, even in conditions like those. Heater in the winter consumes a lot more than AC in the summer, down to where AC is usually not noticeable at all in the overall consumption.