CraigB said:
Lunch could be done Saturday. Hmm, I need to pickup an onion tomorrow then. Oh and some apple sauce.
Click to expand...


Maybe it's fair to warn you, that your kitchen will smell of it afterwards for at least a week. I still have my grandma's recipe for them somewhere, if somebody is interested.

Alright, since it's still the season and it's a typical northern German speciality, I repost it here (though I'm quite sure you won't find the necessary ingrediences anywhere but in Northern Germany, so it's probably one of the few things you won't even get in Chicago or New York):

THE traditional winter meal of Northern Germany is "Gr?nkohl mit Pinkel". I guess I need to elaborate a bit on that.

Gr?nkohl is a green kind of cabbage, that has been cultivated as a vegetable especially in the north-western parts of Germany. It has been refined in breeding over centuries, so that it got its unique flavor. One particular feature of it is, that it won't lose its vitamins and sustenance even after hours of simmering. The heartland of Gr?nkohl is the area around the cities of Oldenburg and Bremen, both fighting for the honor of having the best and oldest traditions, with no winner so far. The traditional "Gr?nkohlfahrten" (Kale tours) start as soon as the first night frost has come. Gr?nkohlfahrten are social happenings, usually organized by clubs, neighborhoods or co-workers and consist of playing a Frisian street sport called "Bo?eln" (also called Klootschieten by the Dutch) in the afternoon, which is played with a hard rubber ball and involves wandering on lonely backroads for several kilometers with a handcart, in which a lot of alcoholic beverages is carried around Once it got dark, you arrive at the restaurant, where the Gr?nkohl meal will take place, and you are usually frozen, very hungry and relatively drunk. And indeed there is nothing more delicious and satisfying, than a Gr?nkohl meal, when you're frozen, very hungry and a little drunk. It's hearty and substantial and the one who manages to eat the most, is named "Kohlk?nig" (Kale King). That winner usually has the duty to organize next year's tour. A typical Gr?nkohl meal looks like this:

Since I was not born where I live now, I was completely overwhelmed by that Gr?nkohl tradition, when I arrived, and have taken it into my heart ever since. Even the German army troops here organize Kohlfahrten. I'm a huge fan of it and cooking it is really easy.

You take the Kale (which is available frozen and in a picked state in every supermarket here), melt some lard in a pot, add some hacked onions and some broth, put the Kale in, add some salt, pepper, nutmeg and mustard and that's all. The rest is about 3 hours of simmering at low temperatures with occasional stirring. After a while you can put the sausages in, if you like. You can also add belly of pork, if you want to give it some more taste. The final ingredient is oat grouts to thicken the whole thing up (those are the white little dots).

Gr?nkohl is served here with two kinds of sausages: Pinkel, a local speciality and pork sausage. Also in most parts you get Kasseler meat with it, and belly of pork.

Now I could tell you how I stood at the stove and prepared the Gr?nkohl over hours but truth to be said, I am too lazy for it, so I buy it ready to eat from a local butcher shop, that serves it in their own restaurant and fills it up in cans for everyone to buy.

All I did, is boil the potatoes and put in the sausages. Tastes the same as in the best Gr?nkohl restaurant, and only takes an hour to prepare Gr?nkohl tastes best, when it is reheated anyway. Because only then does it get the pulpy consistency, as shown below. If you are into good, traditional and hearty plain fare, you will love it.

That only as information for those who ask "German cuisine? What is there besides sausage and sauerkraut?"

In truth, being in the center of Europe and influenced from all points of the compass and the local traditions, the German cuisine is currently one of the most diversified ones in the world (see Gerfix' posting above for example).

Even the typical village inns you can still find everywhere, have changed their menu. You have to look to find one, where traditional local specialities are still served in a good quality. Many have been taken over by Italian, Greek or Turkish restaurants. The "grandma cooking style" has almost only survived in private households.

In any case you won't find out about German cuisine, when you visit Germany and then go to an Italian or Chinese restaurant

Ironically the best places to find what foreigners consider "typical German cuisine", is in restaurants abroad, for example in the USA or in Japan. And then there is of course Munich, where they keep it up for the tourists. Unlike all other Germans, Bavarians actually like to embody the walking clich? of a Lederhosen-Seppl for foreigners
Last edited: Feb 19, 2011
"If Liberty means anything at all, it means the right to tell people what they do not want to hear" (George Orwell)

I grew up and live in Gr?nkohl country, and if you ever decide to make some - prepare for smells. It stinks, disgusting

your house will smell of it all day.
Bo?eln is fun though, and caramelized fried potatoes FTW.

GerFix said:
[...]but is beaten as the best dessert ever by the Belgian White Chocolate Bread and Butter Pudding I had at the King William IV pub in Littlebourne Kent in 1996.
Click to expand...

being a lover of everything white chocolate ... I MUST MAKE THAT!!!

Could this be a fitting recepie? -> http://www.bbc.co.uk/food/recipes/whitechocolateandwhi_86604 ?

Also on the topic of german cuisine, Bratkartoffeln (wich wikipedia translates with "home potatoes") with Bacon(cubes), Onions and fried egg (on the side, not made in the same pan) also also pretty german. That is if they are thin sliced, pan broiled. Perfect food with beer btw.

narf said:
I grew up and live in Gr?nkohl country, and if you ever decide to make some - prepare for smells. It stinks, disgusting

Indeed, I absolutely cannot stand Gr?nkohl because of that. Call me ignorant, but I really don't have any interest in eating something that smells that bad.

Ignorants, all ignorants
"If Liberty means anything at all, it means the right to tell people what they do not want to hear" (George Orwell)

Interrobang said:
being a lover of everything white chocolate ... I MUST MAKE THAT!!!

Could this be a fitting recepie? -> http://www.bbc.co.uk/food/recipes/whitechocolateandwhi_86604 ?
Click to expand...


I suspect the basic procedure would be the same .. although (as I remember it) the one at The King William was done as layers (2 or 3) of bread cut as 10cm diameter circles placed in a careful stack, rather than being a dish served with a scoop. Each dish was prepared individually. It wasn't just the taste, it was also the presentation. Here's another recipe.

Actually, this is probably the technique they used (albeit with different ingredients).
Last edited: Feb 20, 2011

No recipes, but two you might want to look out for are Schweinshaxn and K?sesp?tzle. Neither actually the dogs bits... and yet, both are the dogs bits. Mmmm, lecker!

Finally had a chance to make these, but didn't end up with an onion. Still good stuff...

http://pic.armedcats.net/c/cr/craigb/2011/02/27/photo-85.JPG
I've always had an irrational fear of anamorphic armadillos.​

CraigB said:
Finally had a chance to make these, but didn't end up with an onion. Still good stuff...
Click to expand...

Those look just the way they should.


I love Labskaus. Here is a picture I took a couple of years ago in a restaurant down in the harbor: It may look strange but it is one of those typical dishes, that were created from leftovers and then developed into a delicacy of its own. Legend says it was created on sailing ships in the 19th century. Basically it is mashed potatoes, salt meat and beetroot (hence the colour), seasoned, mixed and cooked together, served with a fried egg, pickles and a sour herring. You can buy it in cans in the local supermarkets here. The mandatory drink is a cold beer.

Each year there is a big event here, where our town is trying to get into the Guinness Book of Records for serving the most portions of Labskaus. On that day you can walk through the pedestrian area and there are dozens of stands that serve Labskaus. Even gourmet chefs give it a try with their own recipes.

It's one of those nice local traditions and I think it's really great.


CraigB said:
Finally had a chance to make these, but didn't end up with an onion. Still good stuff...

The secret of success with those is to grind the potatoes and onions by hand. If you do it with a machine, too much water comes out.
Last edited: Feb 27, 2011
"If Liberty means anything at all, it means the right to tell people what they do not want to hear" (George Orwell)

Looks like r?sti to me... You're supposed to squeeze all the water out in a tea towel when you have it all grated.

ahpadt said:
Looks like r?sti to me... You're supposed to squeeze all the water out in a tea towel when you have it all grated.
Click to expand...

ahpadt said:
Looks like r?sti to me... You're supposed to squeeze all the water out in a tea towel when you have it all grated.
Click to expand...


R?sti are chipped potatoes, while these are grinded. They look similar but have a completely different texture. And if you do it right, you needn't get rid of the water with a tea towel.
"If Liberty means anything at all, it means the right to tell people what they do not want to hear" (George Orwell)

I used an old hand crank grater that used to be my grandmother's (though I think it's from the '70s, not the '50s) into a tea towel, then squeezed out the water. I really wish I had an onion, but my wife had used the last one in the house. I think an onion would have changed the flavor in a good way.
I've always had an irrational fear of anamorphic armadillos.​

This has raised my appetite for making some Kartoffelpuffer again. I only miss a nice grinder, so I just ordered this: 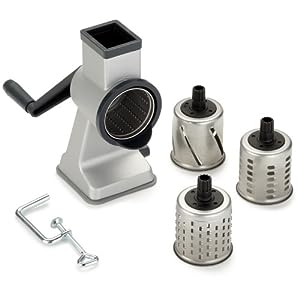 
I think "chipped" might not be the right word. "Shredded" is closer, I guess. No. "Grated". Asbolutely* fantastic with with wild boar

If you look at the picture above: For the R?sti you use the right insert, for the Puffer the one below.
"If Liberty means anything at all, it means the right to tell people what they do not want to hear" (George Orwell)