Volkswagen Reveals The VisionGTI, Set for May 28th Debut
May 23rd, 2014 by Terronium-12 Volkswagen has revealed the final image of their VisionGTI vehicle on their official Facebook page. The car will make its debut at the Woerthersee Festival on May 28th.

?The GTI Roadster, Vision Gran Turismo is a supercar that has been designed for a singular mission: the hugely popular Sony? PlayStation? videogame. This extreme and ultimate interpretation of the Golf GTI will make its debut at the Woerthersee Festival in Austria that begins on May 28th.

Like the Design Vision GTI that debuted at the same event in 2013, the GTI Roadster, Vision Gran Turismo uses the Golf GTI Design DNA to create a strong sporting statement, with distinctive horizontal graphics.

Powered by a 3.0-liter twin-turbo VR6? TSI? engine that produces 503 horsepower and a massive 491 pound-feet of torque, the GTI Roadster, Design Gran Turismo concept is ferociously fast, its speed exacerbated by the low-cut windshield. The seven-speed DSG? dual-clutch automatic transmission is programmed to give incredibly fast shifts on the racetrack.

Roadholding on the track is optimized thanks to an integrated rear diffuser, a gigantic rear wing, and a race-car-style front splitter. The car is equipped with 20-inch wheels that carry 235/35 front and 275/30 rear tires; 4Motion? all-wheel drive helps to transmit the torque to the pavement. Supercar-style vented disc brakes are fitted, with a diameter of 15.0 inches up front and 14.0 inches at the back.

The GTI Roadster, Vision Gran Turismo is presented in a bright, vivid metallic red, a modern interpretation of the classic GTI color.?


Can't way to be able to play this game for the first time in months tonight.

Cannot for the life of me figure out that Lotus around Brands....the handling is an absolute joke

Are you kidding? The 2 formula cars handle perfectly using the old G25 with ABS and aids off.
Brands Hatch is definitely the hardest of all the Senna races. Trick is just carrying as much speed as possible through turn 1 and the first two blind turns (5 and 6?) up the top of the hill.
You really need to short shift or leave it in the higher gear to keep traction out of the corners with all the turbo lag.

There's an insane amount of detail in all the cars I can forgive them for being a bit late.
Dem welds 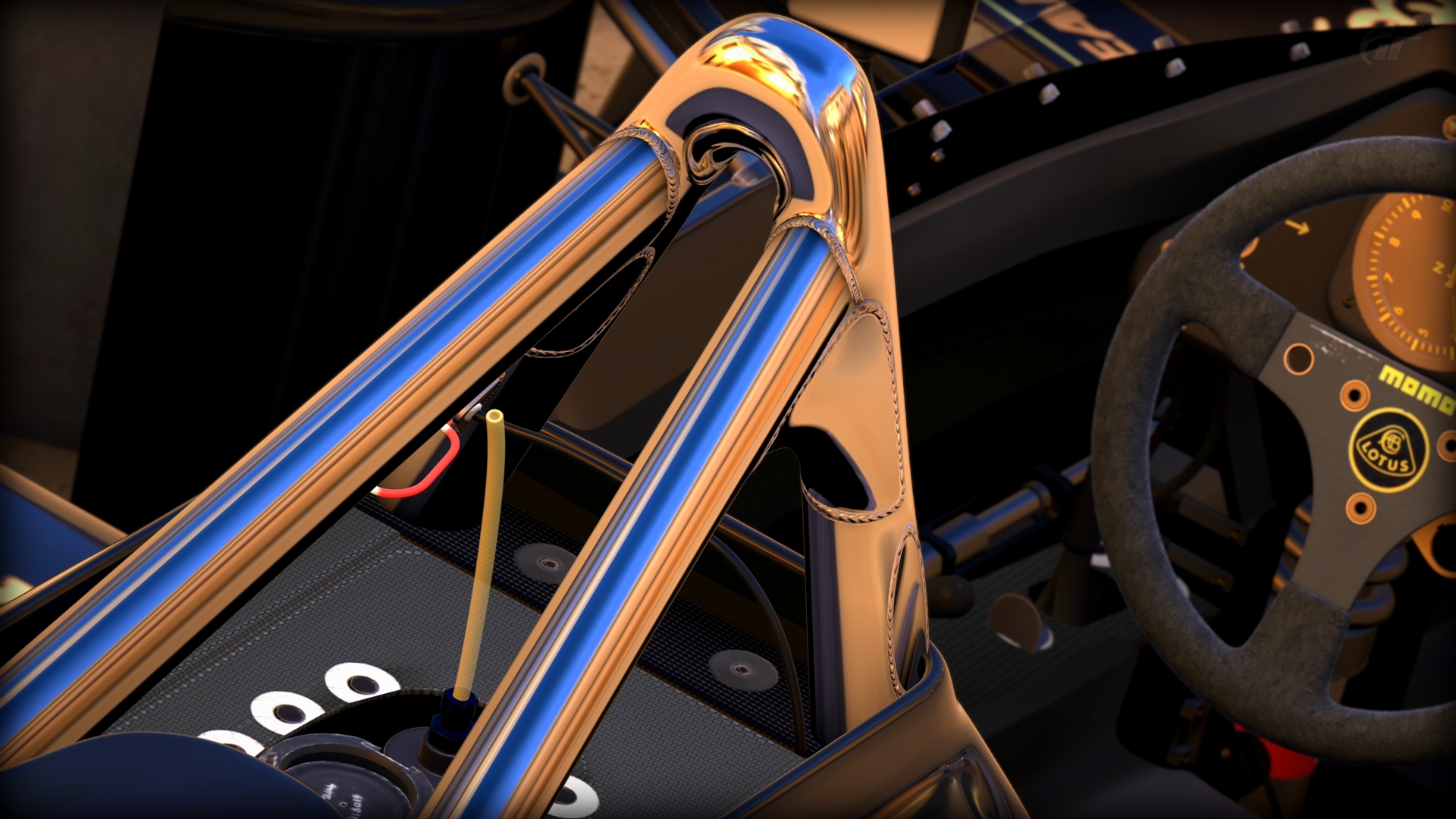 I was fine with it around Monza, it's just Brands that was sucky. I finally managed to string a clean lap together (1:06.8) so that's it, never taking it back there ever again

Also, I would be using manual if my wheel wasn't acting up on the downshift....but it is so I had to make do in auto with no chance of being able to choose my own gears unfortunately.
Last edited: May 31, 2014

I had much harder time at Monza with the chicanes and being disqualified for cutting them. You really need to take care there. The Lotus took a bit of time to figure out with a game pad, it's a bit of a monster to drive. And the F3 was great fun to chuck around.

It's great to see some historic circuits in the GT series, though. I think the only non-contemporary real circuits before these were the classic Fuji layouts in GT4. Hopefully there will be more to come, there's heaps of potential for good content there. Even if you'd only use classic layouts of existing locations, things like the old Fuji layouts, pre-chicane Monza, the classic Silverstone layout, maybe the old version of Laguna Seca as well. Oh well, one can always dream...

The first corner in Brands-Hatch is absolutely kicking my ass....that blind drop always fucks up my lines.

I am having quite a lot of trouble getting gold with the Lotus, but it's a fun car.

Was surprised at how easy the Monza challenge was. I managed to beat the gold by over a second with what I thought was going to be a fairly mediocre warm-up lap...
Last edited: Jun 1, 2014

Redliner said:
The first corner in Brands-Hatch is absolutely kicking my ass....that blind drop always fucks up my lines.
Click to expand...

Same here. I'm going too wide or too slow, but sometimes I get it just right(and mess it somewhere else)

I'm pretty sure something's wonky with that Lotus. I don't think Senna was doing nearly 220 MPH down the Monza straight in 1985 or whatever, but I could be wrong. Is it just a physics thing?

220mph sounds about right, F1 cars were reaching 210 in Monza last year - and that was with 250bhp less than Senna's Lotus had.

Found this on GT Planet.

I havn't play GT in almost a year. Still have not gotten GT6, and probably won't. I am hoping that more information about GT7 will be presented at E3 next week. Even though I don't have GT6, I still enjoy reading this forum and seeing what everyone thinks and looking at the screenshots everyone posts.

GT7 will probably be the reason why I will finally get a PS4. Hopefully by then I will have my business degree and a good job. Looks like I could graduated in the Fall of 2015, which seems like a reasonable release date for GT7. But that is if I don't go ahead and go for my major as I do enjoy school more than working and am glad I went back to school to finish my degree after getting laid off.
Last edited: Jun 3, 2014

My PS3 is a GT playing machine, that's pretty much all I do with it.

Redliner said:
My PS3 is a GT playing machine, that's pretty much all I do with it.


As revealed yesterday, Gran Turismo 6 has increased its track list by one with the addition of the Red Bull Ring ? formerly the A1 Ring ? ahead of this weekend?s Formula 1 race at the location.

i1zzDziF3UrzqzBundled in with the v1.09 update, this free DLC includes both the long F1 circuit, around which GT Academy winner Jann Mardenborough will be piloting his GP3 car at the weekend, and a shorter layout. The tracks are added by way of a 598Mb update, available now.

Also coming along expectedly is the Volkswagen Vision GTI concept, announced earlier in the month at the W?rthersee festival. This 500hp roadster is available to win in its own dedicated Seasonal Event ? again, regardless of the laptime ? and has been added to the Vision GT section of the game too. A special Vision GTI racing outfit has been added, it too coming as a prize for the Seasonal Event. A little more unexpectedly, the stable of cars in GT6 has swelled once more. The GT Academy RJN Motorsport GT-R NISMO GT3, as used in the final round of this year?s GT Academy event is probably not so much of a surprise, but the update also brings the Lexus IS F CCS-R ?11 (as raced by GT Academy 2010 winner Jordan Tresson) and Toyota?s TS030 Hybrid. The dynamics of the car on surfaces with cornerstones and bumps have been improved
The effect of the tyre geometry has been changed (mainly for the ?Camber Angle? option)
The handling of some rear heavy cars has been improved;

The default settings of the tuning parts have also been adjusted to match the above changes.

Other cars adjustments
On the various Mitsubishi Lancer Evolution X models, it is now possible to enable the [Active Steering] under the [Driving Options] of the ?Quick Menu?.

Other offline improvements and adjustments
- [Data Logger] can now be opened from the ?Quick Menu? of Time Trial events. Please note that only limited features will be available in this way. Please refer to the online manual for more details.
- A [Reset to Default] option that returns the car to its showroom condition has been added under [Car Settings].
- Signal Starts are now enabled on tracks with signals.

Other online improvements and adjustments
- A countdown is now displayed on the bottom right part of the Open Lobby screen, showing the time before an event starts and the time when the track voting ends.
- The uploading time for both Drift Trials and Time Trials (Section) have been changed.

The patch is available as of this very moment and weighs in at 598Mb. An install phase of around 30 minutes is also required and gamers are advised that this may differ from what is displayed on screen.
Click to expand...

I've heard some people say that the update has caused the vehicles you own prior to installing it to not be allowed into a 'tuning prohibited' room if you left it stock. Apparently you need to hit the 'reset to default' option for everything. However, I just tried it with a Red Bull Jr and it let me in just fine As confirmed in a major announcement from Polyphony Digital and the F?d?ration Internationale de l?Automobile (FIA), Gran Turismo 6 has become the first-ever video game to feature FIA-certified content, with four of the game?s real-world tracks receiving approval from the governing body of world motorsport.

Certification was granted after FIA officials visited Polyphony?s Tokyo development studio to inspect the game?s 3D modeling standards. Other tracks featured in the game are also marked for inspection to receive FIA certification in the future. Jacques Berger, Head of Safety for the FIA, spoke highly of the game?s quality standards: ?It was not until we completed the tests between our track data and the game?s track data that we fully appreciated the level of work and attention to detail that goes into the development of Gran Turismo 6. It was not just the tracks that have been precisely mapped out, but also the surrounding landscapes such as the run-off areas, grandstands and buildings.?

Polyphony Digital?s partnership with the FIA will play an even more important role with the launch of the 2015 FIA Online Championship, an official competition which will be hosted in Gran Turismo by the FIA themselves.

?This innovative new partnership will ensure that millions of Gran Turismo and motor sport fans can race on even more detailed tracks at home. The Gran Turismo series has played an important role in helping to attract a new fan base to motor sport. With the input of FIA in the development of the upcoming FIA Online Championship, Gran Turismo 6 will now offer an experience even closer to the real world of motor sport. We are also excited to be working closely with Polyphony Digital and Sony Computer Entertainment in the future to find new ways to continue to make motor sport more accessible to millions of fans that share a passion for racing,? said FIA president Jean Todt.

Kazunori Yamauchi is understandably very proud of this accomplishment, referring to it as the ?biggest accolade we have ever received? and a ?major step forward [in] our mission to connect our virtual and real racing worlds?.

Stay tuned for more news and details on the FIA Online Championship, which is sure to be a major event in the world of Gran Turismo next year!
Click to expand...

FIA partnership. No idea where that'll lead in the long term. Could be just the contest, could eventually mean something in terms of content. It's still a huge step either way. This game has gone into overdrive lately.

Nissan VGT (to be added next month):