Is it party first, or persona? That is how it looks to me more an more. It really is sad, the republicans used to have things they stood for. Now they are blindly following this vain fool.

It's a cult of personality, but it has been for thirty years. How much does the GOP still pray to the ghost of Ronald Reagan?

Can you two take this to the Trump dumpsterfire thread? This is the gun thread, not the abortion or GOP thread.

Guns and the GOP are kind of the same thing; they've made it their political brand - and this is the political sub-section.

Kentucky is about to pass constitutional carry - governor has indicated that he'll sign the bill.

Now it gets interesting. Does CA appeal this because they desperately want to keep the restrictions and continue leading the nation in gun control? Or do they let this go because the 9th would rule in support of restrictions and then this might get to SCOTUS, which likely would strike down capacity bans nationwide? I think either way the CA mag laws are dead for good, it's just a question of whether that gets applied to the rest of the states.

Remember NJ's ban of magazines that hold more than 10 rounds with no grandfathering? Well, apparently no one turned any in.
https://www.ammoland.com/2019/04/fo...acity-magazines-turned-in-to-nj-state-police/

Indiana has made permits free.

Cliffs: poor elderly man defends himself in his own home from invading thugs using a revolver he inherited from his father. New York throws him in jail for having an unregistered gun.

Because guns are evil!

Cliffs: poor elderly man defends himself in his own home from invading thugs using a revolver he inherited from his father. New York throws him in jail for having an unregistered gun.

It’s NY. Anyone who values their life and rights should probably leave it. And most of the rest of the Northeast. That part of the country is notorious for zealously prosecuting ‘process crimes’ - I.e., even if a legal necessity like self defense dictated an action and the action was legal and justified, you have to have taken that action in the exact prescribed way, etc.

Not so much in much of the rest of the country. A similar issue arose in a shooting here in Dallas - two men attempted to rob a third at a car wash with firearms. The victim was illegally carrying a concealed firearm without a permit and shot both miscreants, at least one of them to death. Once the shooting was ruled as justified, the only action the Dallas PD and district attorney took on the illegal carry was to tell the guy to come pick up his pistol, to which they’d pointedly attached a concealed carry permit application.

On the ‘every cloud has a silver lining’ front, NY will probably end up paying for the man’s housing, food and medical care as a guest of the state so I guess at least he doesn’t have to worry about that if found guilty, given he was having problems paying the electrical bill...
Last edited: Jun 10, 2019

Just dispose of the bodies properly and you'll be fine.

prizrak said:
Just dispose of the bodies properly and you'll be fine.
Click to expand...

Well, yeah, there is a reason people facetiously recommend, "Shoot, shovel and shut up."

Spectre said:
It’s NY. Anyone who values their life and rights should probably leave it. And most of the rest of the Northeast.
Click to expand...

Hence "most of the Northeast".

No word yet on whether or not the ATF shot their own dogs.

On Monday the 17th, a man attempted a mass shooting at the Dallas Federal Courthouse. He fired repeatedly into the lobby of the building: A nearby photojournalist managed to get this photo of the miscreant in action. 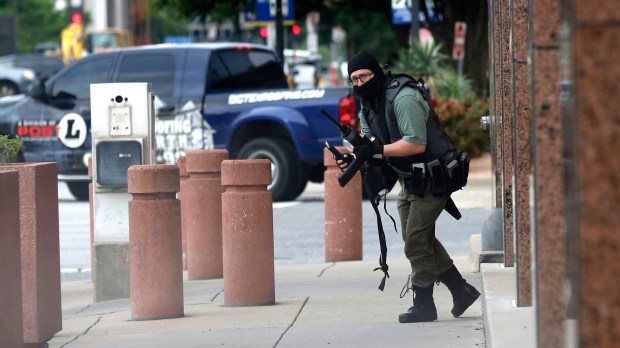 So, how many victims were there at this attempted mass shooting? If you don't count the shooter himself, who was shot and killed by federal agents and guards -Zero. Nobody else was even significantly injured. And yes, there were quite a few people in that lobby at the time. Several of them were Federal agents that returned fire.

And, of course, it turns out the FBI knew about the shooter years in advance. https://www.sandiegouniontribune.com/news/sns-bc-us--federal-building-shooting-20190620-story.html

next you'll claim that mass shooters are unsuccessful when there are a bunch of good guys around to shoot back! #commonsenseguncontrol

One funny thing is that it can't even be claimed that the shooter was untrained and the lack of training was why he failed in his objective. He was former US Army, reportedly having served with the 101st Airborne for ~18 months after basic training and advanced infantry training - so he definitely knew how to handle the weapon.
You must log in or register to reply here.
Share:
Facebook Twitter Reddit WhatsApp Email Link
Top