Are you telling me that AR15 rounds don't have child seeking capabilities and nuclear warheads?

prizrak said:
Are you telling me that AR15 rounds don't have child seeking capabilities and nuclear warheads?
Click to expand...

I always loved the narrative that AR's are military grade weapons of war, designed for the battlefield, which have no place in civilized society, while also being completely useless if the people ever tried to use them against the military on the battlefield.

TC said:
I always loved the narrative that AR's are military grade weapons of war, designed for the battlefield, which have no place in civilized society, while also being completely useless if the people ever tried to use them against the military on the battlefield.
Click to expand...

There's also the related narrative that AR-15s are high powered rifles that should be restricted to military use only due to their supposed ungodly destructiveness while conveniently ignoring the fact that in many states and Canadian provinces they're banned from hunting anything much bigger than a squirrel because the AR-15's 5.56mm/.223in round is not considered powerful enough to humanely kill most game animals.

TC said:
I always loved the narrative that AR's are military grade weapons of war, designed for the battlefield, which have no place in civilized society, while also being completely useless if the people ever tried to use them against the military on the battlefield.
Click to expand...

Remember this idea comes from the same people who simultaneously claim that police and government are racist but want government to have more power.

In other news, Eric Swalwell wants to limit possession of ammo to just 200 rounds. Most events require more than that, with my personal best being 1300 rounds in a single event.

Why isn't the media reporting on the rivers of blood in the green states?!?!

LeVeL said:
Why isn't the media reporting on the rivers of blood in the green states?!?!
Click to expand...

They are too busy calling Biden a racist I guess

Well, the BBC got this one massively wrong... 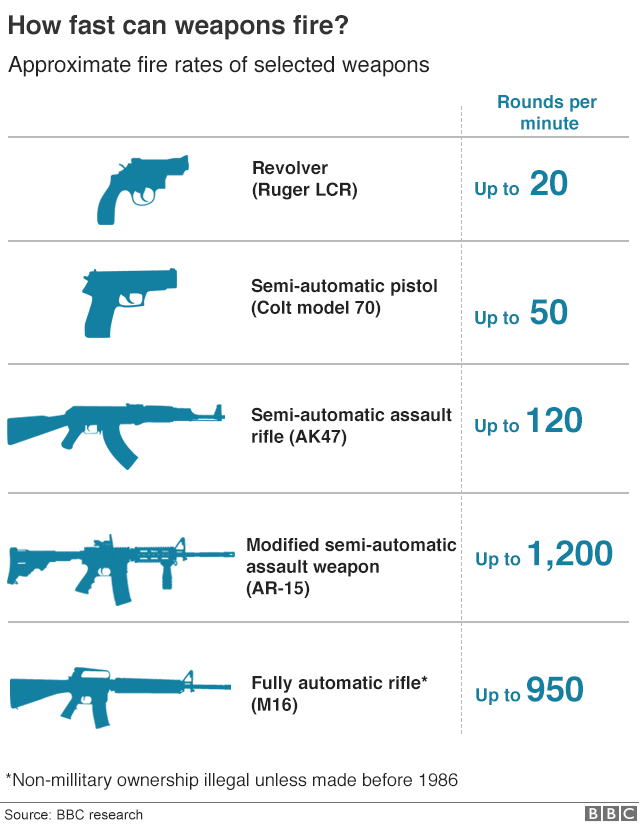 LOL... yeah, sorry, no. Modified semiauto cannot go beyond the cyclic rate of a full auto. (Among many, many, many other things wrong with that.)

Are they including reload times for some guns but not for others?

LeVeL said:
Are they including reload times for some guns but not for others?
Click to expand...

They're apparently cherrypicking and/or pulling numbers out of their arse to make their narrative.

Some they're going with raw cyclic rate - the M16 number is very obviously raw cyclic as that's the official stated cyclic rate - how fast the mechanism can load a cartridge, fire it, eject it, pick up the next cartridge and repeat the cycle, without regard to real world concerns such as "having to reload" or "weapon will jam or break if used this way." Cyclic rate in this context is like SAE Gross Horsepower - it's what the thing could do in theory if all other loads or concerns are ignored. The official US military estimate for effective rate of fire when operated by an average trained soldier or Marine on a range (i.e., ideal conditions) including reloads, is 150-200.

The "modified semi-auto assault weapon," besides being complete bullshit in just the name, is also a number they pulled out of their arse. The depicted AR-15 is a semi-auto relative of the M16; much like a Subaru WRX STI's engine is a massively detuned relative of the actual Subaru rally cars' engines. Thing is, if you illegally modify it to be full auto, it's not going to be any faster than its "go faster" relative - just like if you modify your WRX STI to the same state as the rally cars, it's not going to be faster. The mechanism simply can't work any faster, modified or not. If you try to run your modified AR over the same rate as the related M16, it will jam and die. It might even explode - as some military experiments with speeding up the M16 has shown over the decades. So, no, 1200 is just BS.

The revolver stat is simply pulled out of their arse. Yes, revolvers are slow, but a decent user on a range should be able to hit 35+ with speed loaders. Further, I have never seen a modern revolver manufacturer quote a rate of fire simply because the low capacity and speed of reloads depending so much on individual operator muscle coordination makes measuring the rate of fire difficult. Further, if they were going with pure cyclic rate, just get an empty revolver and pull the trigger as fast as you can for a minute. That's the raw cyclic rate; it's considerably faster than just 20. The graphic for the purported LCR is the "good guy" silhouette of a Colt Detective Special, a completely different revolver. Think them using a VW Old Beetle icon to represent a modern Golf to see how bad that is.

The "Colt Model 70" doesn't exist and if they're talking about a Colt Model 1911 Series 70, that is the wrong icon as well - looks like a Sig automatic to me. I have no idea where they pulled the 50rpm number from, but it was probably pulled from the same butt that they got the revolver number from. The official demonstrated mechanical cyclic rate is somewhere around 900 or so for the .45 caliber ones and over 1000 for the 9mm variants.

Jerry Miculek has demonstrated that humans can run the 1911 at a rate of at least 400 rounds per minute. For those that don't know, that's not a machine gun. He is literally pulling the trigger once per shot.

That's about half the mechanical speed limit of the mechanism or the raw cyclic number. Even if you include reload delays and limit the 1911 shooter to seven round magazines, there's no way the max rate of fire is 50rpm slow for (again) the average shooter trained to the level of the average new military recruit just out of boot camp.

The AK number is even more laughable. The AK's raw cyclic rate is somewhere around 600-650rpm (it gets very unhappy with you if you try to push it faster.) Izvesk, the manufacturer, quotes the effective rate of fire in semi-auto, including reloads, at about 40 aimed shots per minute. In full auto for the military version, the number including reloads is quoted as being 100 rounds per minute (compare to the M16 above - the AK is slower because of the more cumbersome loading system). For "spray and pray" - unaimed shots just to put bullets in a general direction - in single shot/semiauto mode, the observed rate including reloads in semiauto is more like 80. No fucking clue where they're getting 120 other than out of their asses.

Never mind the fact that they used the 'scaaaaaaaaaary' silhouette of a 2010s M4 styled AR to depict their alleged "semi-auto assault weapon" while using the silhouette of a 1980s M16A2 for the "safe, military owned so no threat to you citizens" military full auto rifle. Because they couldn't be fair and depict what the M16 looks like in the same timeframe, could they? Because the as-issued M16 suuuuuuuure hasn't looked like that in about 20 years. Say hello to the M16A4, which looks almost exactly like the scary M4-styled AR icon they used. Only longer and with more scaaaaaaary stuff on it. Worth mentioning that a lot of the 'scaaaaaaary evil' stuff on it were not developed by the military but by civilian sport shooters and then adopted by the military - which is partly why they look so similar.
Last edited: Aug 6, 2019

Revolver might be a Model 36. Definitely not an LCR. I have both.

Makes about as much sense as any other gun control measure