I've made an adapter for my DSLR lens, which I use to take photos of the film negatives. Black and white is no problem at all, I can do it all in lightroom. Invert tone curve, adjust levels and it's pretty much there.

The colour negative, however, is giving me problems. The film itself has a very orange tint, which I'm having troubles removing. Here's an example: 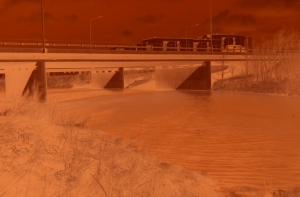 Here's this same frame that I've scanned years ago with a "proper" film scanner, and just pressed some auto-adjust button: 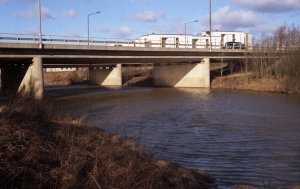 I'm trying to replicate those colours, without success. Especially the blue sky I can't even get close. Wanna give it a try? Here's the raw nef file from the camera, have a go at it and tell me what you did if you can get it close to the scanned example. And even better if you can do it directly in Lightroom

I've tried to scan negatives in my flatbed scanner before, they never worked out. Obviously there is more to a negative scanner than just the scanner bit. I'll have a go though, can't hurt to try.

Edit: Well I got something.

It isn't as good as the 'proper' scan but I didn't spend that much time on it. I used this guide to tell me how to set the curves and eliminate the colour cast, something the hardware scanner obviously does very well. It's possible to set up an action in PS to pick the white and black from two points in the shot every time, which should work assuming that the rig doesn't move out of place.

I get the impression that even though that's a raw file it's still missing lots of detail though. How are you lighting the negative when taking the shot? I think it needs to be brighter. This could just be because I've imported in through Camera Raw, I'm also used to working with raw files in Lightroom. I couldn't quite find the alternative though, will investigate further.
Last edited: Mar 12, 2015

We've talked on IRC and it doesn't need to be brighter, the light needs to be colder. Although that's a pretty good attempt and I think that technique would work better if the light source wasn't an incandescent light bulb, but either flash or day/sunlight.
​

IceBone said:
We've talked on IRC and it doesn't need to be brighter, the light needs to be colder. Although that's a pretty good attempt and I think that technique would work better if the light source wasn't an incandescent light bulb, but either flash or day/sunlight.
Click to expand...

Makes sense, in theory holding different gels up to the negative should give an idea of which is needed, should it not? I have a pack of gels, a big diffuser and various types of tube, may give this a try myself.

Matt, that's not too bad, starting to look natural. I've tried pretty much the same technique as in your linked guide (setting endpoints before inverting), but results were worse Maybe I was doing something wrong in raw import. But still, it's not quite there, a lot of shadow detail is lost, for example.

Looking at raw histogram, it's apparent that I don't have enough data in blue channel. I don't think cold backlight is the only solution, it should be possible with any broadband source if exposure on DSLR is set properly.

But anyway, I'm going to experiment with a flash backlight this evening, and if colder light isn't enough, I'm going to try multiple exposure. Like, -1 stop for red channel, +1 stop for blue channel, then combine them somehow in photoshop, although I don't have an idea how, yet.
Threads: Panda, 7, LS400, Daimler, Kawa​

Using the flash as backlight is an immediate improvement. This time I made sure my histograms are not clipping in any channel, and in result I can get this just by minor adjustment in Lightroom: 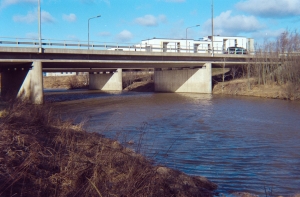 Again, can't get the same sky colour as in my first example without Photoshop, but it's already acceptable. Of course, flash has a very peaky spectrum, so I'm probably losing something. Sun as backlight would work better