This is not a troll, this is an honest question, What is the point of overhead cams, as opposed to a cam-in-block design. I honestly can not see, or imagine (after serious thought), what they add to a car. Other than being "More modern". They sure as hell make simple maintenance more difficult. (A head gasket that takes hours on one car, takes 2 weeks on another, only very partially the fault of the cam design i admit)

I am ignorant, please educate me.

OHC engines can rev a lot higher than OHV ones. They are physically bigger though, which is why most V8s are push-rod types (to save space).

I am sure witchcraft plays into it, also.

An LS2 makes around 370-420 horse, yet even with high compression, its horsepower is equal to or slightly more than its displacement (in cubic inches). That is kind of pathetic, if you are strictly looking at horsepower numbers. Torque, which I think is a better measurement of power, is immense in any OHV engine, and should be , because you trade high revs for torque.

They also:
4. Cost more
5. Make for taller, less space efficient heads
6. Are harder to work on

edit: I forgot a very important aspect of OHC engines that us ethusiasts usually forget - they on average have much lower NHV levels. (Noise Harshness and Vibration)
Obviously, this is not so important on something like a Camaro, but VERY important on a Lexus or Mercedes.
Last edited: Apr 7, 2010

What screwed up design of OHC engine were you working on?

It usually does not take appreciably longer to do a head gasket replacement on an OHC engine over a pushrod.

Pushrod engines have their own problems, too. Try changing the cam in one without taking the front of the car completely apart. For that matter, just try changing the cam, period. Also, if you want to change the valve timing for just one side (say, just the intake), you can't. You have to buy a new cam, unless you get into some really complex Goldbergian engineering. Also, pushrods are more fragile and less durable than many claim, plus they're another part to go wrong that an OHC engine simply does not have.

There are also certain constraints upon head design and spark plug placement for the pushrod.

I mean, my personal feelings on engines aside, i just wanted straight info.

A) Why are you comparing a 1979 2.5 Carbonated NA engine to a 1989 turbo FI engine? Its kind of unfair isnt it? Just because of the same displacement.

The Ford modular OHC line is slowly starting to enter the purpose built dragster arena, so even that's just a matter of time. Remember, most dragster engines are sourced from (or based on) Detroit designs and Detroit has only recently come back to OHC V8s after a very long hiatus (in the case of Ford) or just recently started (Chrysler).

The real disadvantage of pushrod designs is that the actuating mass of each value is higher (you have the weight of the pushrod, and typically much larger rocker arms since you are translating the pushrod motion 180 degrees (from the pushrod going up to the valve going down).

"back in the day" when metallurgy wasn't as good, you became constrained by how good you could make your valve springs -- and the higher spring rate required for the extra mass you were moving around meant you couldn't rev the engine too high before you'd hit the natural harmonic of the springs themselves -- leading to valve "float" where the springs are kind of doing their own thing (think of them shivering in place, sorta)

F1 engines at their much higher rpm avoid this issue by using gas filled "springs" instead of metal (and they went to those back in the 1980s or very early 1990s, I forget). But these days in general, metallurgy has advanced significantly, to where you see NASCAR engines turning well north of 9,000rpm -- and really, they've become limited by mandated gearing, otherwise you'd see them up over 10,000rpm these days.

Of course, a second disadvantage of a pushrod design is that it doesn't work well for more than 2 vales per cylinder. In smaller, higher revving engines, that's a real disadvantage and why you see modern designs are larger OHC.

Maxima had a VQ, not VG

MattD1zzl3 said:
A head gasket that takes hours on one car, takes 2 weeks on another, only very partially the fault of the cam design i admit.
Click to expand...

Two weeks? So that's what half the time it takes you to change your spark plugs?

Anyhow, as has been said OHV has limited RPM and valves. It is also harder to implement things like VVT (only recently has this been overcome). If you want/need more values (smaller engines especially) you want OHC. OHV today is only useful for higher displacement engines.

The only conclusion i came to was more valves as well (many OHV engines have no issue doing 6K rpm or more, you just need a valvetrain that can keep up with it. As stated NASCAR engines do 9,000 rpm for 3 hours with few issues).

The question than becomes this, why are more valves better than bigger valves?
Last edited: Apr 7, 2010

50% lighter valves? I can only assume that more valves would increase the amount of mass that needed moving, not decrease it. And what is valve overlap? Doesnt that have more to do with its configuration and the size of the cylinder?

valve overlap isn't the valves overlapping, but their timing...
while the intake is already opening, the exhaust is still closing...

when the exhaust valve is still open while the intake valve is opening, it will suck in the air for the next cycle, you just have to make sure it's completely closed before it can suck the fresh air into the exhaust (or you get a fart)

and about the valve weight, it isn't so much the weight of the valve that is important, but the strength of the spring needed to close it again, and since heavier valves need stronger springs, and stronger springs give more resistance, it's best to have them as light as possible

with 4 valves/cylinder you can get the total opening-size a lot bigger than you could with 2 valves. they also have better breathing, give better filling, and since you can place the spark plug in the middle, better combustion, all resulting in more power and mileage

Im used to thinking Heavier spring = better, full stop. Now you're telling me that people WANT weaker springs? o.o Low displacement is a strange world, and im trying to get with the party wagon. (If you cant beat them, complain, than join them)

Lighter valves can move quicker and require less force to do so.

I have an autoblog feature from a while ago about OHC vs OHV- it's actually in my favorites and pretty informative on the benifits and drawbacks of both.

Im used to thinking Heavier spring = better, full stop. Now you're telling me that people WANT weaker springs? o.o Low displacement is a strange world, and im trying to get with the party wagon. (If you cant beat them, complain, than join them)
Click to expand...

light springs are better, but light springs will have the valves float at lower rpm, so if you want to reach high rpm, you need heavy springs (even with light valves)...

that vid shows it quite clearly, before the springs have been able to close the valves, the cam has turned and the lobe is pushing it open again
this is an externally driven engine, just to show you what would happen in theory, in practise, you'll never reach this stage, it just won't be able to reach those revs...

One of the other advantages of a OHC engine is that you get get a better combustion chamber shape. I think it was Spectre who mentioned the Nissan twincam engines, they have a wonderful pent roof combustion chamber.

With a better chamber shape, you can get away with a higher compression ratio = more grunt etc etc

....Also, its not the metal that always makes the difference make sure you remember injection type and the computer that drives everything....

However a lot of this talk about engine valve train layouts is a little academic. I think the Fiat idea (look up the twin air motor) with electromagnetic/Electrohydraulic inlet valves and mechanically (cam) driven exhaust is the way forward....with a cam driven exhaust valve its very good, since you can get a lot of the combustion heat out of the valve via the rest of the valve train. 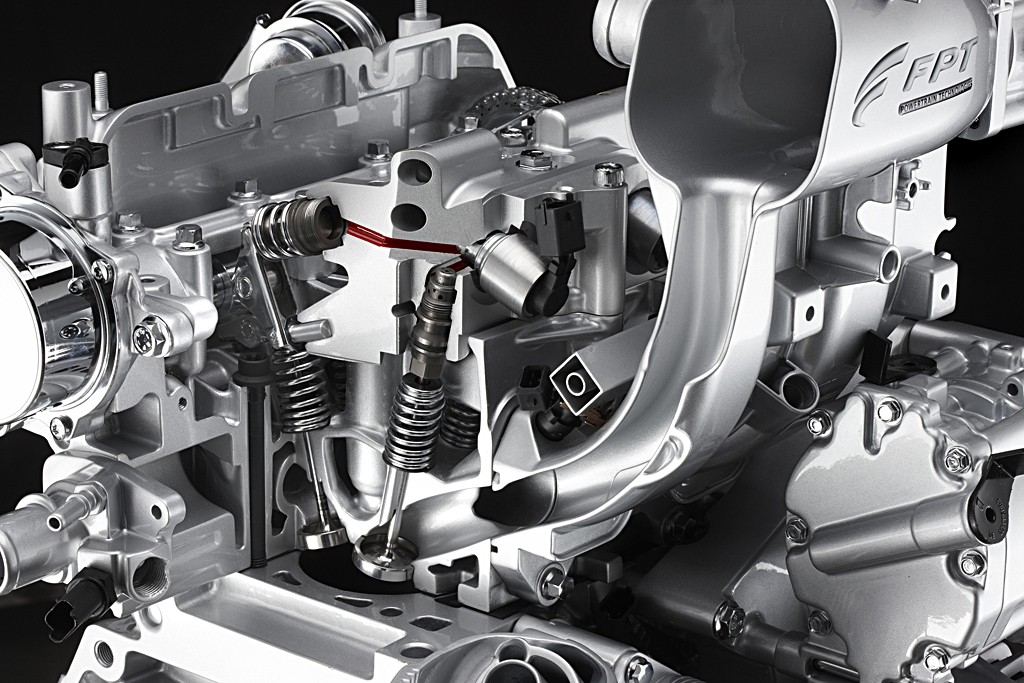 And I suppose if you take this idea forward a bit you could almost design a push rod motor, with a nice 4 valve pent roof combustion (with the plug or a direct injector up the top) chamber shape, and since you only need to drive the exhaust valves mechanically. This means you can set the electro magnetic inlets up as you want.

Add in the fact that you can make a nice long hydraulic lifter for your mechanical valves, which you could make lift variable with a hydraulic bleeding system.....it almost sounds like you could design a push rod motor that would circumvent all the advantages of a DOHC/4 valve OHC system while retaining all the difficult cam driving stuff in the block making your casting design easier....well this is what I dreamed up over a beer....comments?
Last edited: Apr 8, 2010