In this tutorial I will cover the very basic editing in Premiere Pro, just enough to take your original footage and make it slightly more presentable for viewing than what you get from when you start and stop recording. This is based around GoPro HD Hero footage, so there's a little extra step, since the GoPro has crap audio and this takes into account secondary audio, but that step can be easily skipped and the rest adapted for any source video.

Step one, you, of course, create a new project. This window will pop-up when you start Premiere Pro. 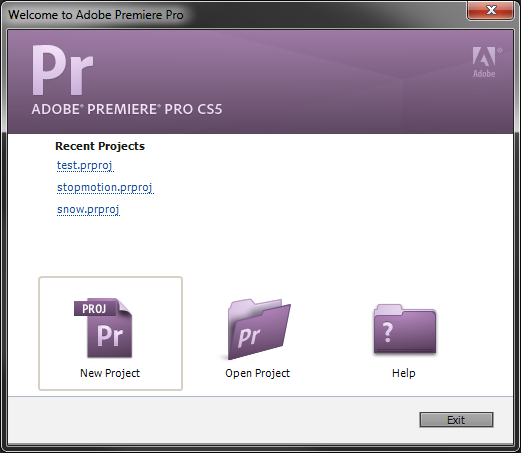 In the next screen, you'll select the name of your project and the location for all the clutter Premiere crates. 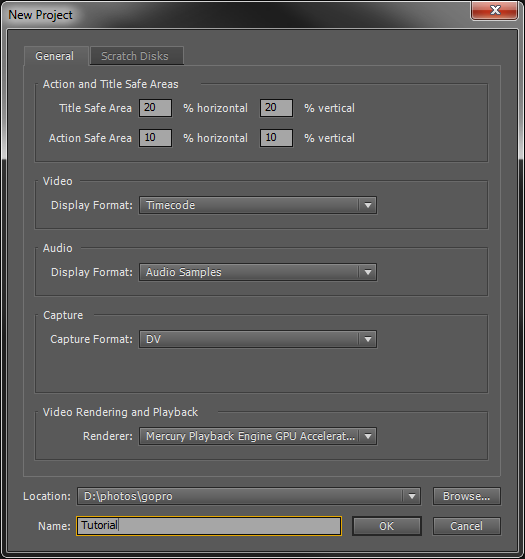 Next up, you need to select the preset that matches your source video to the letter. 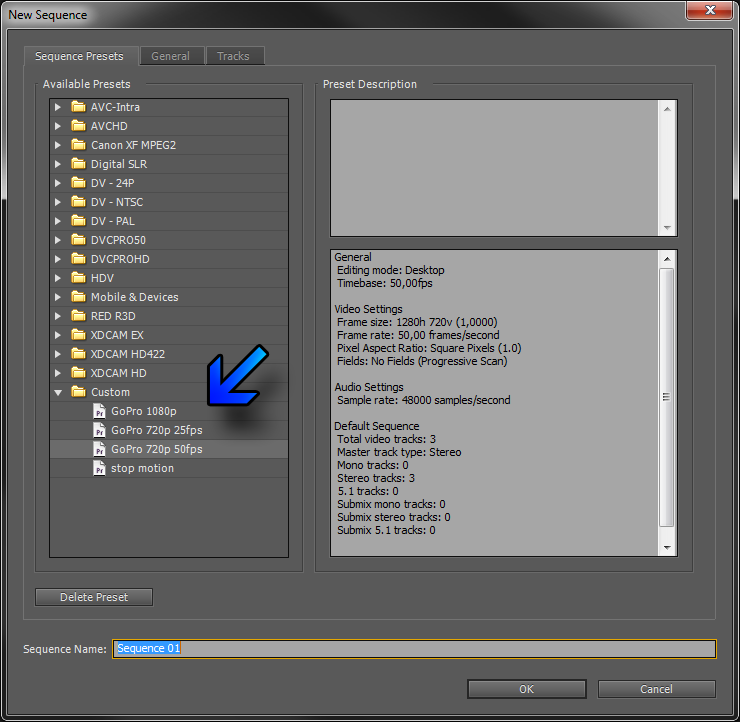 There are many already built in to choose from, however GoPro presets aren't, so we'll have to make one. In the next tab we'll choose the editing mode, frame rate (if you've set your GoPro to PAL, this will be either 25 or 50fps, but if you've left it in NTSC, it'll be 30 or 60), frame size (if you're shooting in mode 1, that'll be 1920x1080, mode 2 and 3 will be 1280x720, etc... consult your manual to see the exact frame dimensions) and other settings as shown, as GoPro footage is neither anamorphic, nor is it interlaced. 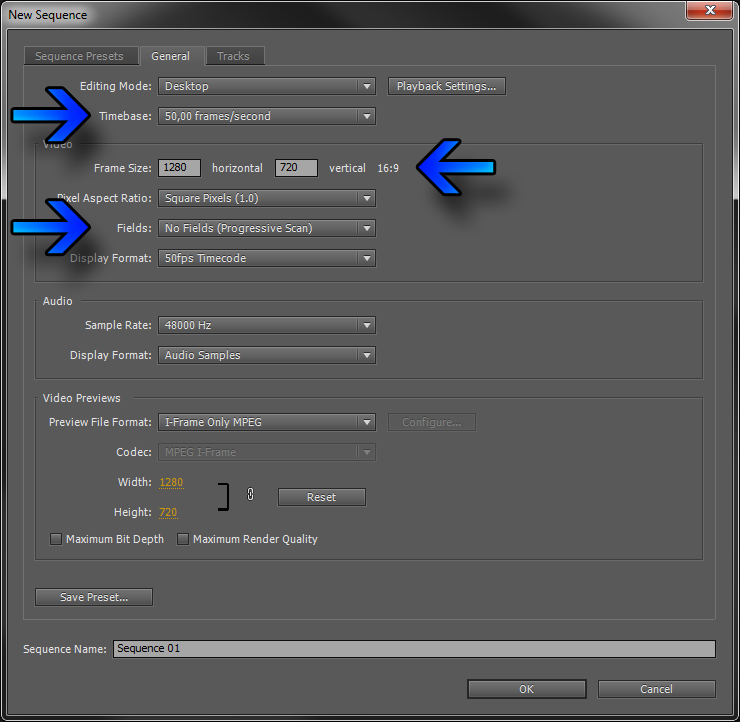 In the final tab, select how many video and audio tracks you want. This will depend on whether you want to add text or other graphics (these have to be overlayed into their separate tracks, or layers) or extra audio, such as background music. 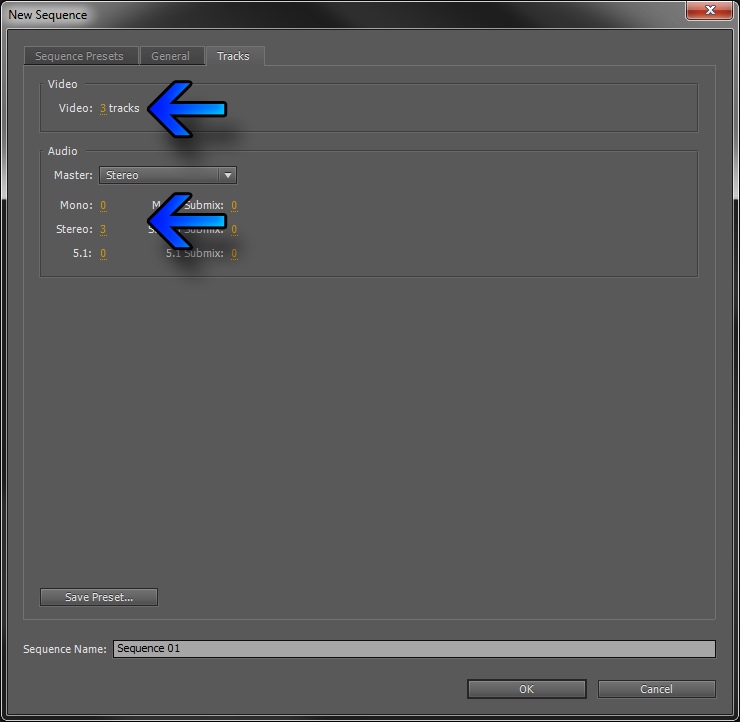 Once you're done with that, the main Premiere Pro window will open. May seem a bit daunting, but it's very logical and simple. 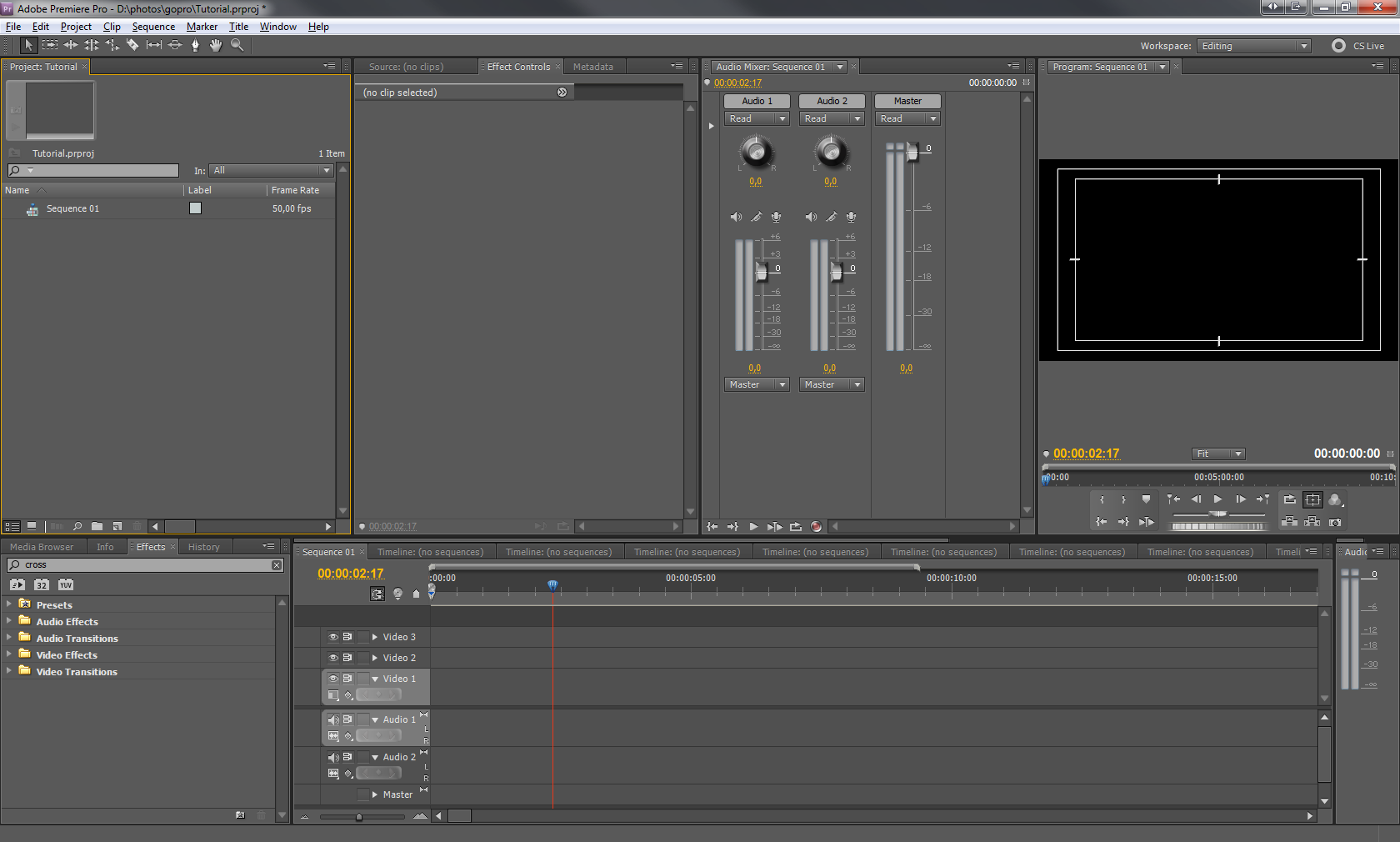 The first thing you'll need to do is import your footage. You can do this by clicking File --> Import, or by simply dragging the files from your file manager into this pane: 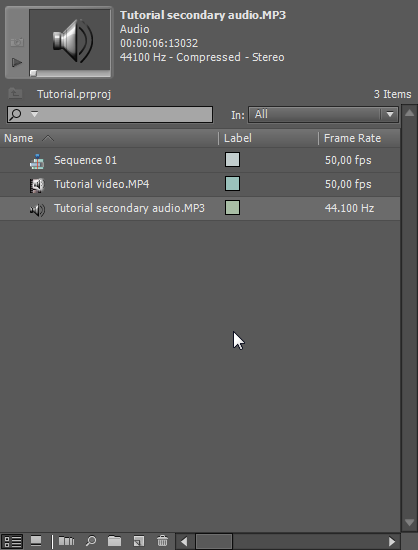 Now you need to drag the imported footage onto the timeline. Note that if you click on the filename, it'll want to rename, click and drag the icon to the left. It's just a little quirk of Premiere Pro, but can be frustrating if you don't know about it.

In that screenshot I've imported both the video and secondary audio. As you can see, the video takes up both 1 video and 1 audio track. It's not very visible here, but the Audio will show an analyzer track. The two little vertical lines indicate where I snapped my fingers to create a visual and audio cue for synchronising the secondary audio track to the GoPro's audio track. At this point, if you want to zoom in for greater control, grab the position indicator by the blue handle (that's how you move it anyway) to where you want to zoom in and then manipulate the slider in the bottom left corner of the timeline window. Just don't forget to zoom out when you're done.

Since we'll be completely replacing the GoPro audio track with the secondary one, this is what has to be done next. Once you've synced up the track (just drag and drop, until the audio cues match up), grab the edges of the rectangles in the timeline and drag inwards until they line up. They will snap together, so they line up completely automatically. Then, right click on the GoPro footage and select unlink. 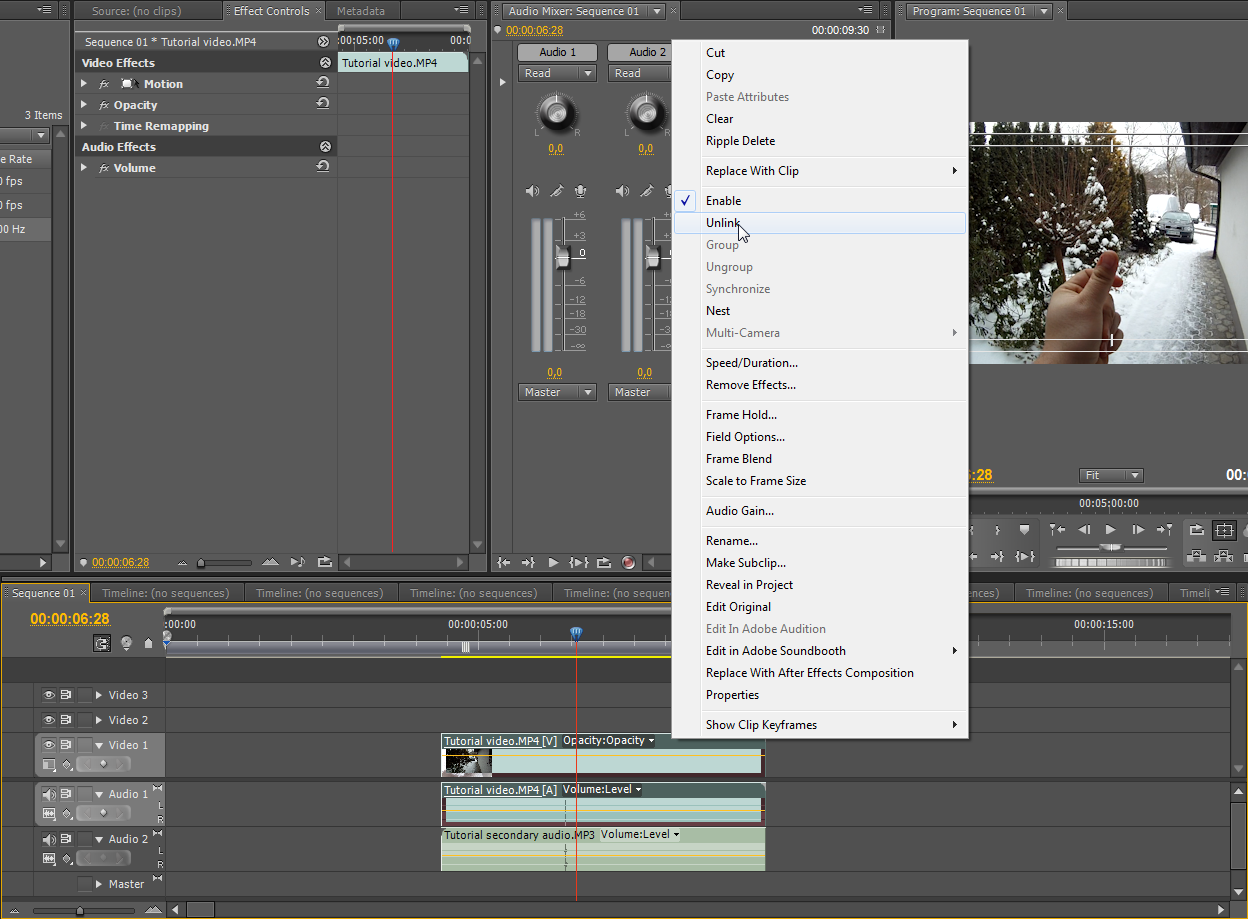 This will let you select and move the video track independently of the audio track. Now you'll have to deselect (click in an empty spot), then select only the audio track and delete. Now grab the secondary footage and drag it one track up (this is so if you import extra footage with video and audio, there won't be any collision, since as soon as you place video in video track 2, for instance, its audio track will be placed in audio track 2 as well, so it's good to keep the matching video and audio on equally numbered tracks), then select both, right click and select link. 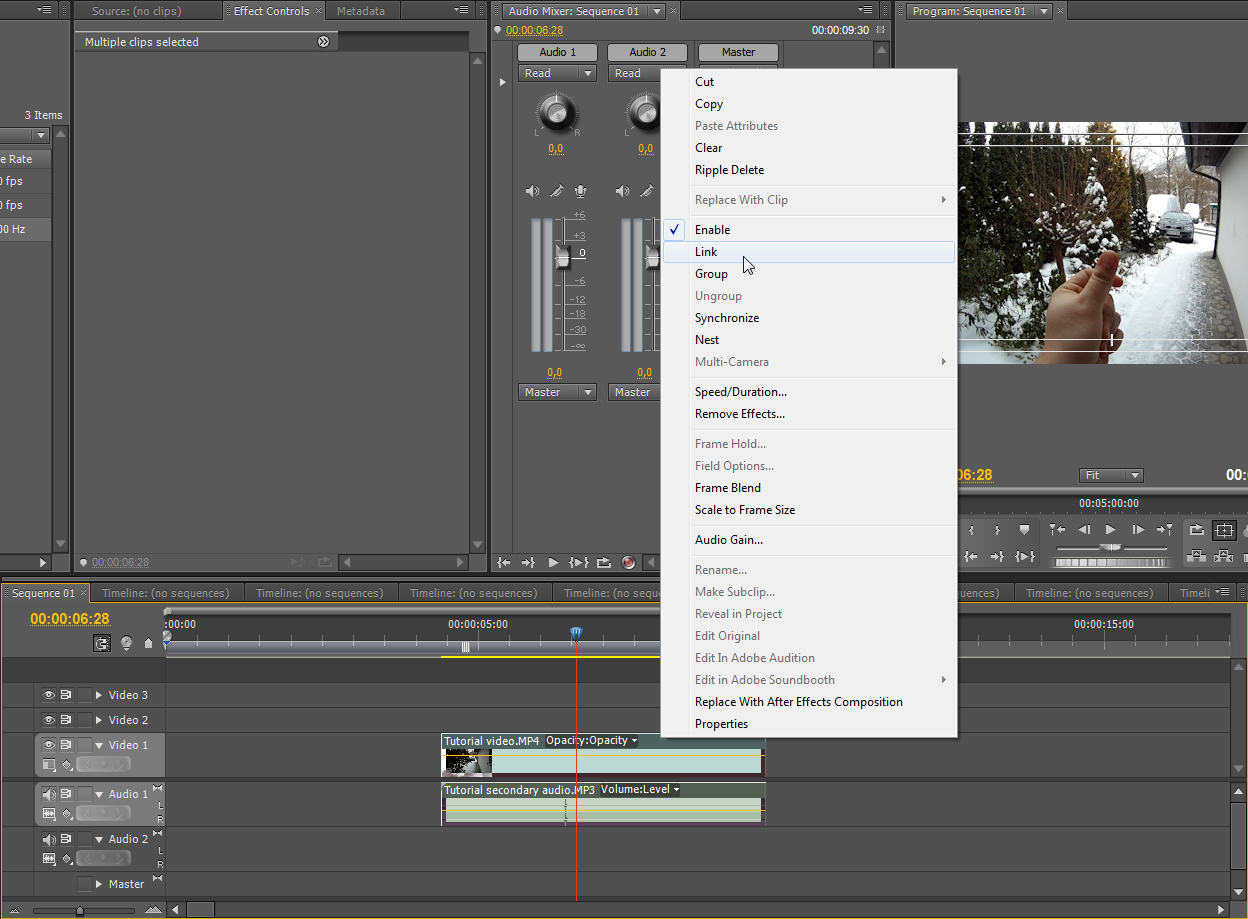 Now both tracks will be selected at once, when you click either the audio or video track, their length will be adjusted together and if you clip or cut footage out, it'll happen to both tracks, as if they were imported together. This concludes the GoPro specfic audio replacement step.

Now at this point you just have to find the points of the footage where you want the video to start and end and drag the ends to that. Easiest to place the position marker on those points and the ends will snap to that frame when you drag them close enough.

If you want to cut a portion of video out, the easiest way to do so is to place in and out markers and extract. Place the position indicator on the beginning of the footage you want to get rid of and hit the Set In Point button.

Do the same for the end point, but click the Set Out Point button.

Now hit the extract button. This will remove the footage between the in and out markers and move the now separate segments together, so there's no pause in between.

Now that your footage is cut down to the length you want, you might want to add a few transitions for a bit of polish. I almost universally use Cross Dissolve for video and Constant Power for audio. In the window to the left ot the time line you can either navigate the effects tree to find them, then drag to the footage (it'll snap to either the ends of the video or where you placed the cut).

Or you can start typing into the effects search bar and the tree will automatically shrink the list to include only the effects that contain those words. Quick and easy way to get to the effect you want.

To adjust the length of the transition, you can either drag its outer edges or click on it and type in the length into the effect controls window.

Now to avoid any black frames at the beginning of audio drag a rectangle around your entire video to select everything and drag it to the very beginning of the timeline. Make sure you're zoomed out and scrolled all the way to the left.

Now all there's left to do is exporting the video. Hit File --> Export --> Media. If that option is grayed out, the focus must not be on the timeline. Click somewhere blank on the timeline and try again. 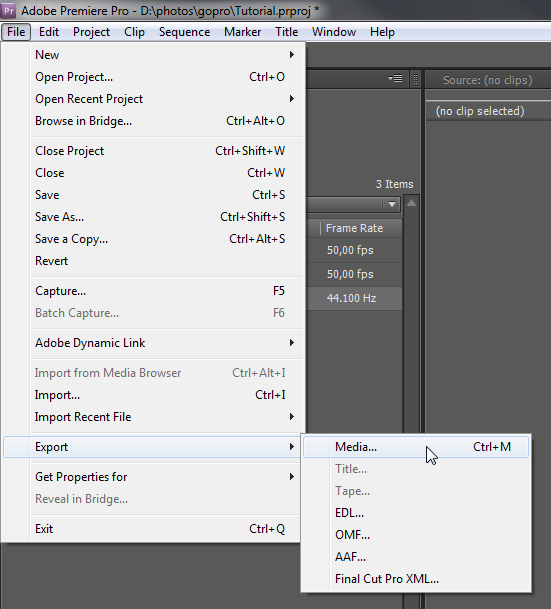 Since the intended destination for your video is probably youtube, select the applicable YouTube preset from the drop down menu. 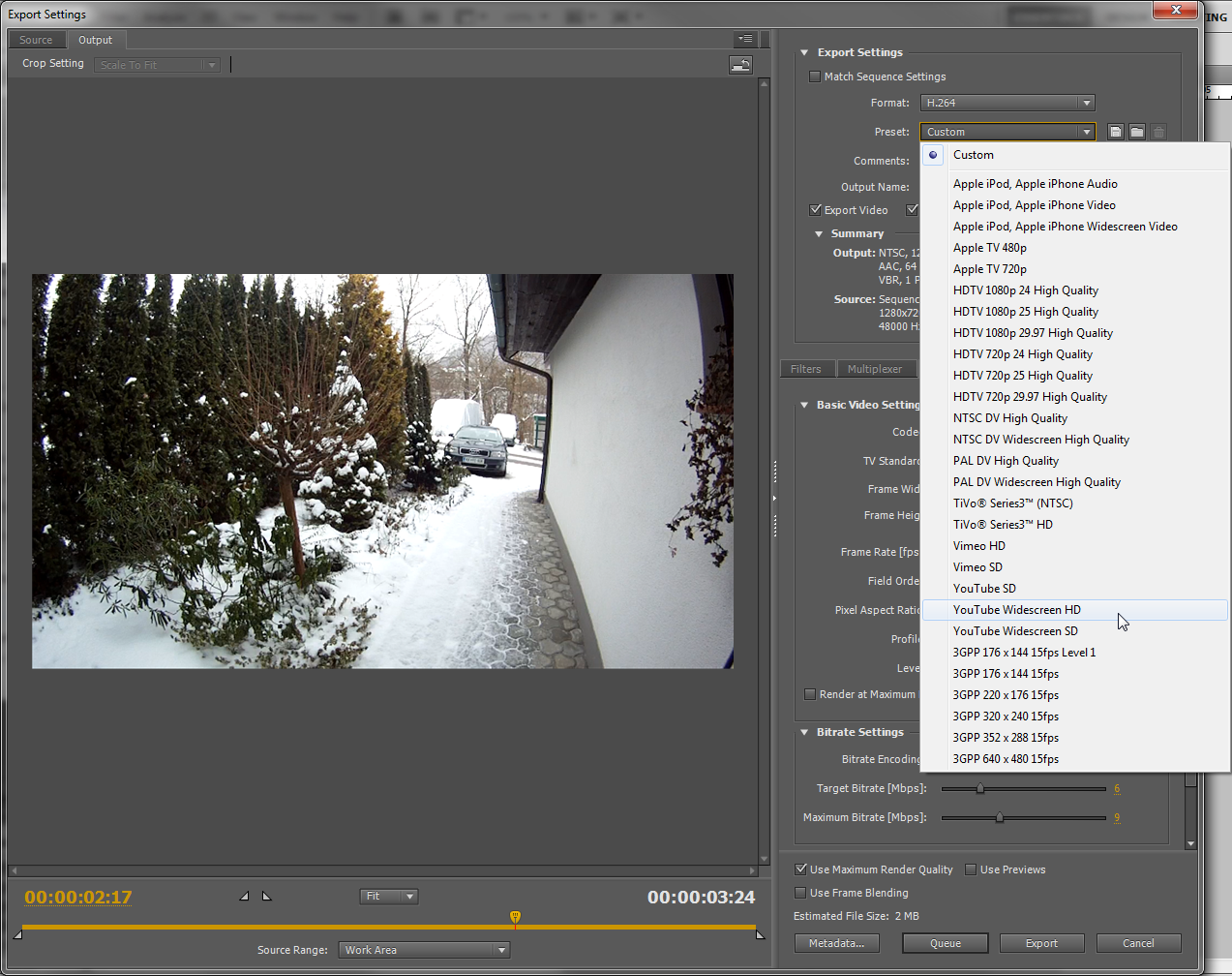 Click on the output name and select your destination and filename.

Since YouTube doesn't care for any framerate that's over 30, we'll have to select either 25 or 30 from the framerate dropdown menu, if your original footage is 50 or 60 fps respectively. YouTube will reduce the framerate on its own, but you'll end up with a filesize that's 2x as large for no reason.

Also, if you have time and a powerful enough machine, select VBR 2 pass from the bitrate encoding dropdown menu. This will take longer than 1 pass encoding, but will produce a nicer image. 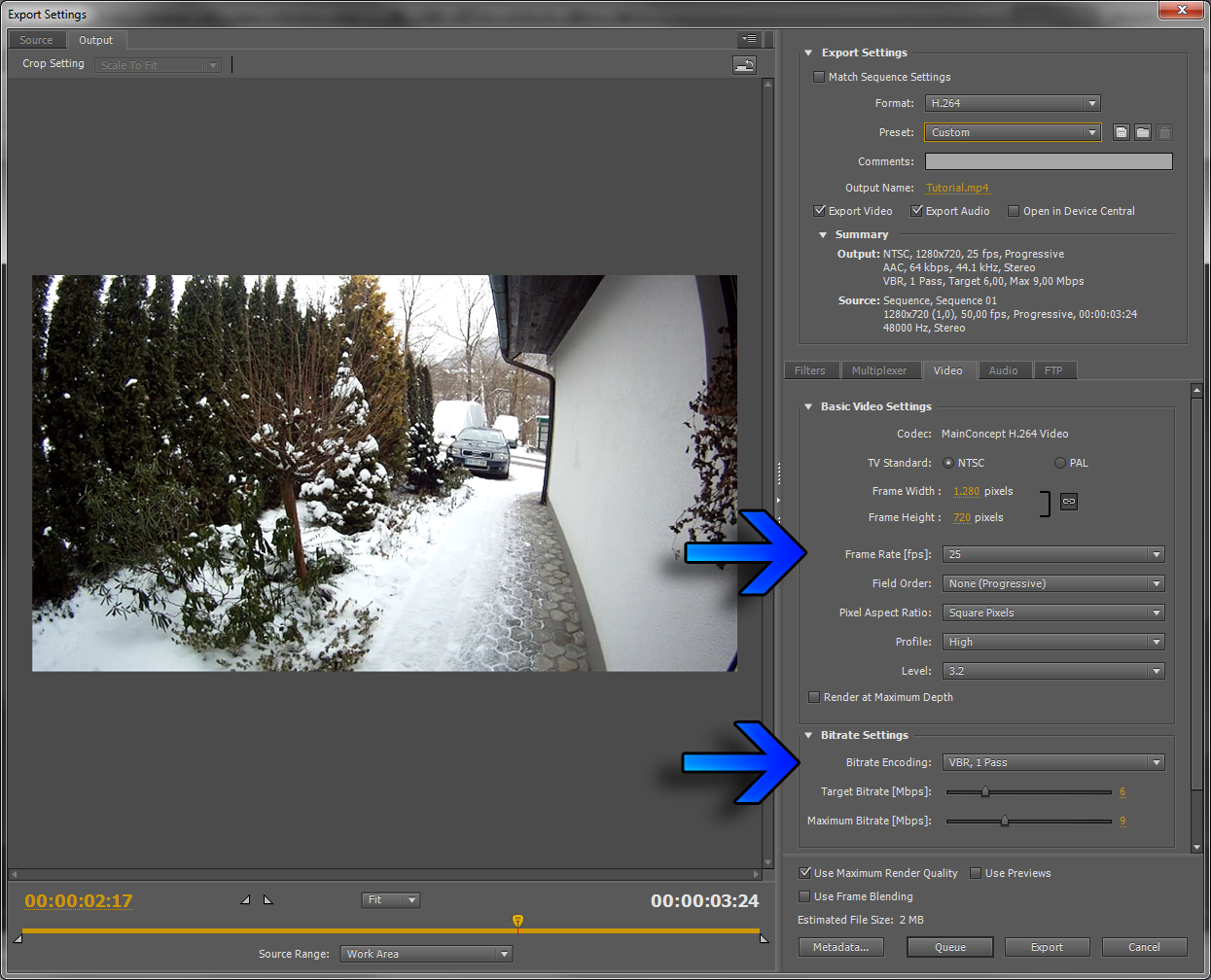 I always feel like a moron when I try to use that complicated software. This will help tons.
My Cars: 2008 Dodge Viper SRT-10 convertible (summer weekend car), 2001 Ford Mustang GT coupe (winter car & grocery getter)
There is no replacement for displacement.
- Wolfgang Bernhard, then Chief Operating Officer, Chrysler Group talking about the Dodge Viper SRT-10
... I ask Herb Helbig, vehicle synthesis manager for SRT and a member of the original Team Viper development group since day one, if they'd ever thought of adding traction control. "It comes with two," he says, pointing at my feet. "Learn to use them." Got it.
- Motor Trend on the 2006 Dodge Viper Coupe, November 2005

Holy fuck I needed this. Premiere is the video program I have no idea how to use. I normally stick to Sony Vegas for stuff like this, but it may open up my options.