This thread is a bit of work in progress so bear with me if you want to.

The tools I had were some remote ruralroads around my place of upbringing, the depth of night and a Citroen C3.
This car was the runabout of my aunt which passed away recently, cancer might be damned. Before that car she had a Mazda 323C.
The car I wished her was a Maserati Coupe, but she never saw the point.

So she went with the Citroen instead.

My mother drives a slightly older 207, so the feel is sorta familiar.

The roads (googlemaps link with the rough outline) are part of the complex I and some others call the valley of thousand valleys. A lot of rural roads, if you dare to use them, framed by some national roads winding up and down the waters of the countryside. All in all it could be driving heaven if there weren't all the small villages and cottages demanding restrained pace and overall awareness. Animalcrossing seems to be an issue, but I was spared of that or at least managed to avoid it. Some deer crossed my path but I could avoid it without making headlines in the local newspapers. (Yes Ice crossed my mind, but I hope he doesn't read this)

It is a 2009 Citroen C3, the last before the DS styling kicked in.
It has a 1.4 Diesel with 68 HP and some torque. It isn't powerful, but enough to overtake if you want to.
The ride isn't as smooth as a I expected, but I had the old DS in mind which I didn't even drive btw.
Center of gravity seems a bit high and the steering is vague, but with that in mind it could be a worthy successor of the 2CV.

Here are the pictures: 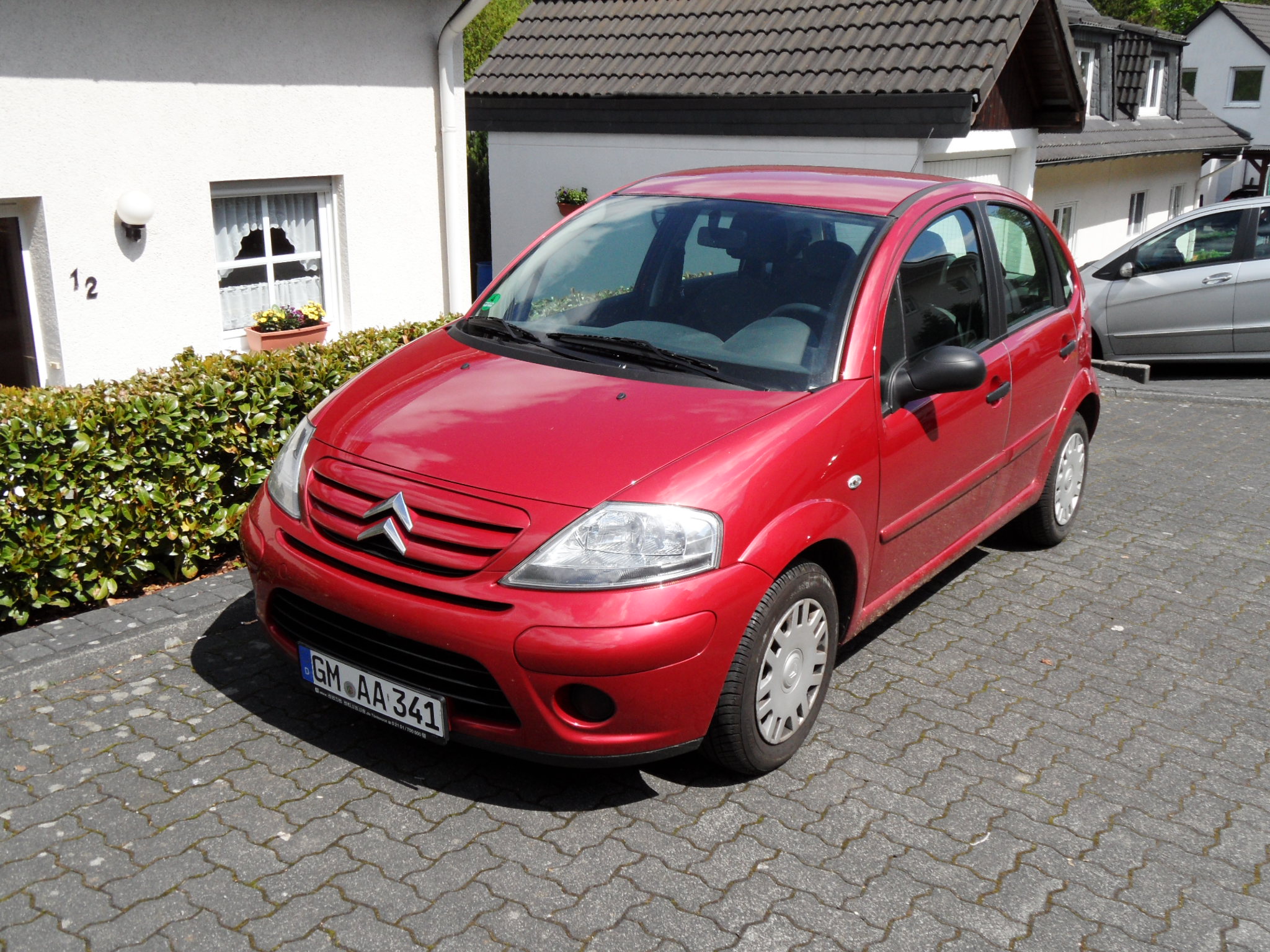 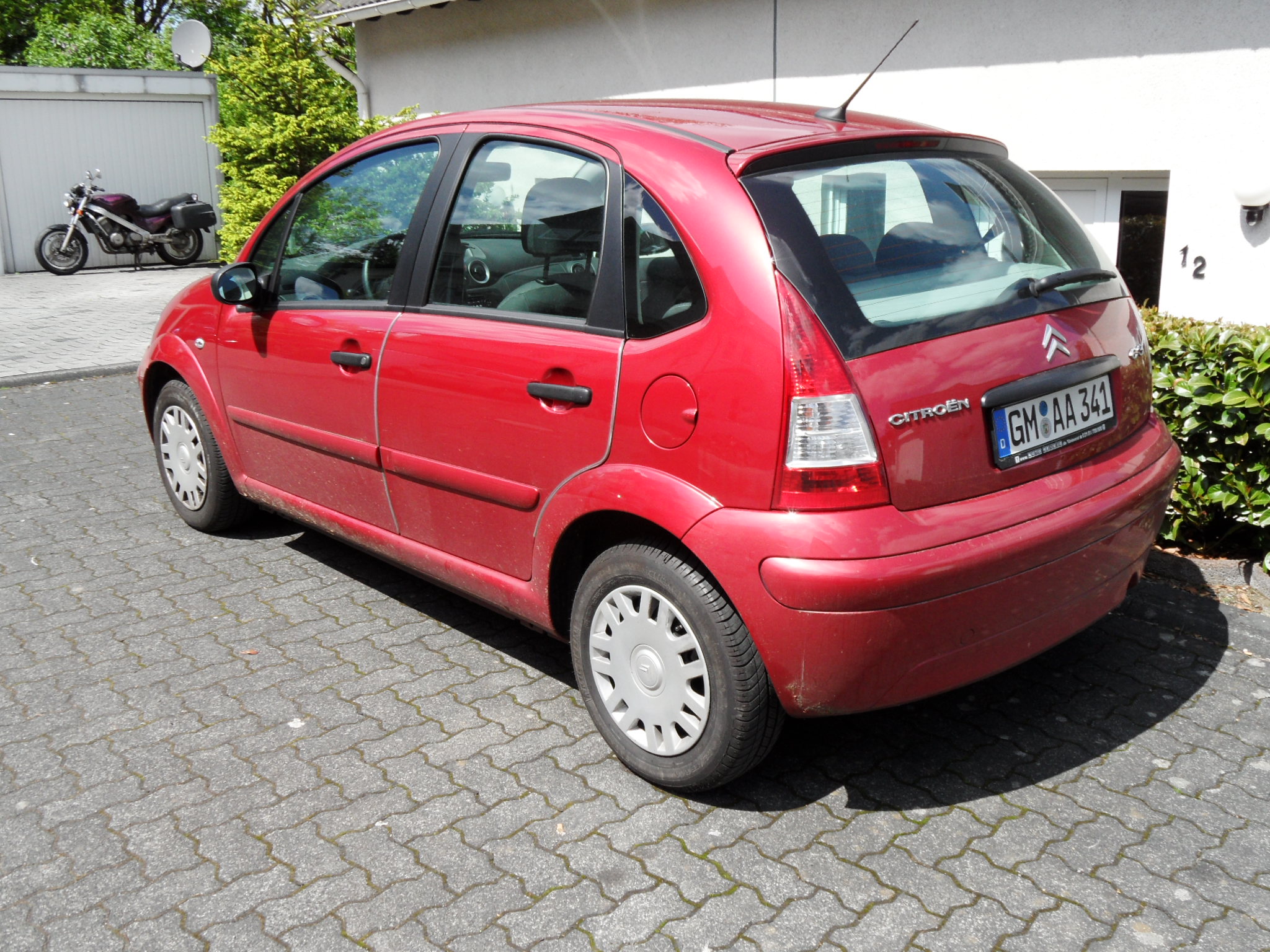 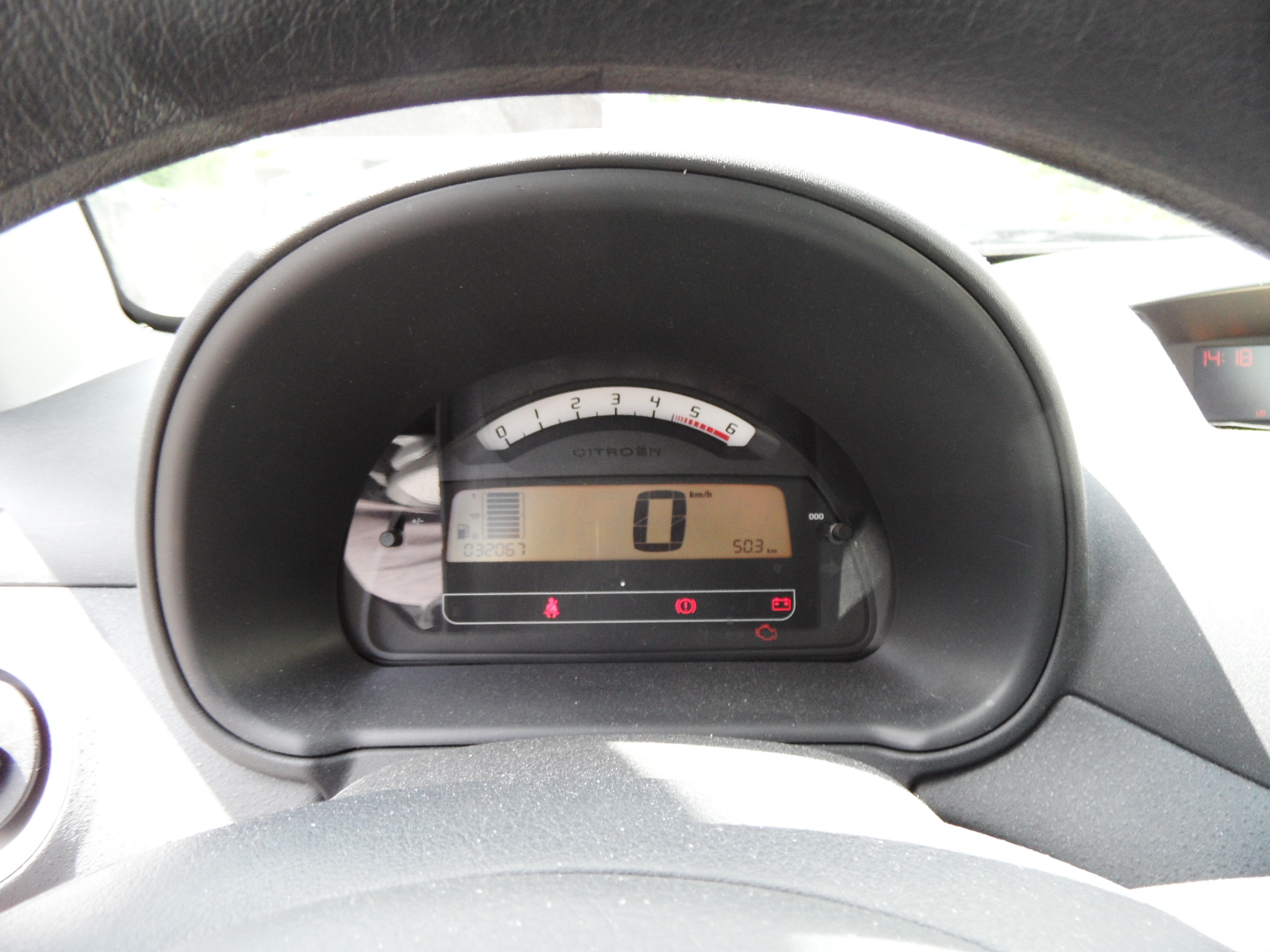 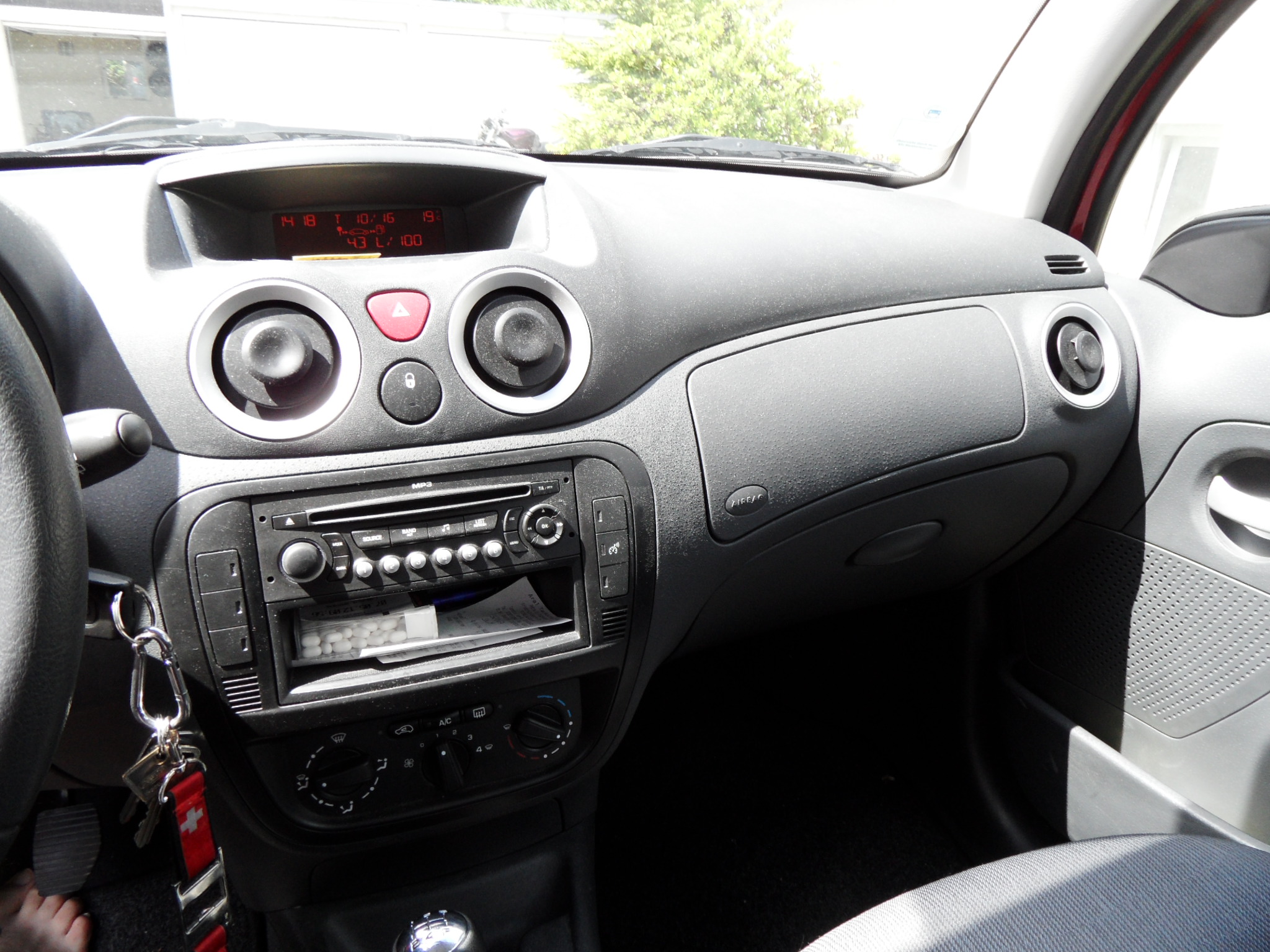 proof pics with note on a tyrebill:

I am a bit new to the concept of keeping a turbocharged engine. The ones I drove before didn't have such an emotional connection, that I cared about their well being.
The Transit was my first RWD and it was always exciting to hear the whine of the turbine, and the AUDI felt so refined, yet fell apart.
Last night I tried to find the spot where the noise of the turbo wasn't drowned by the rattle of the engine. Maybe I heard it, but I'm not sure. It should be between 1.6 and 2.2 krpm, but only hills animate me to rev that high.

I cheated with the consumption btw. I filled up in Waldbr?l. From there it is almost exclusively downhill.

PS: with the CItroen as a daily I might make a thread about my bike and the necessary maintainance. Heck, it could need some work.

As a bonus, have a picture of the bike aswell 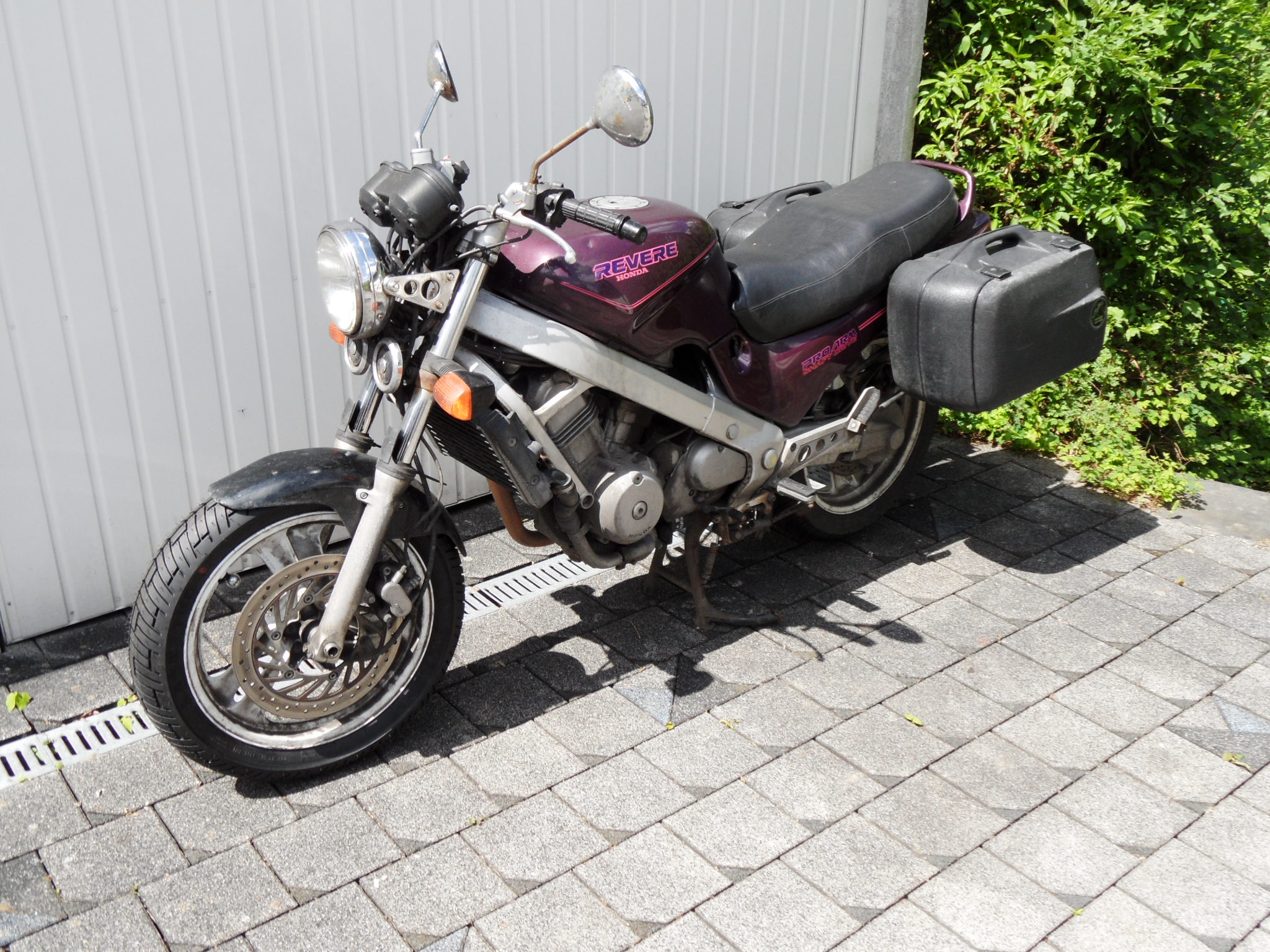 No pics of the car or the roads?

pics, rough route and a small confession added. Thx for the patience.

Had the second fillup lately. 1000km was the goal and I reached it.
I'm keeping it between 1.6 and 2.2 krpm most of the time. Thus using the turbo in the best range.
The handling is fair, bodyroll with the highish center of gravity is a given. The high pressure in the tires make it a bit of a rough ride. I should reduce it it to lessen the strain on the axles. I'm still running on fully loaded plus a bit.
There isn't a temp gauge and the AC switches on if I want to demist the windscreen.

Today I was in a bit of a thrashing mood after work, but only the fuel economy was hurt. 130 kph on the B256 between Derschlag and Br?cherm?hle isn't a wise thing to do.
When I got the car, there were some scratches on the front right bumper. I didn't fix it and I don't really plan to, but today I found a new dent in the front left fender. Maybe that's why I got a bit reckless.

A colleague at work had one and he found it OK on his motorway cruise and put on shedloads of miles, the only thing I think he did was to make sure that the oil was changed more frequently than in the manual and also checked that the engine oil was the exact spec as quoted. Oh and of course kept to the service intervals.

Perfect reliability whilst he had it, but as I said he did lots of motorway work 35 miles each way every working day.
Last edited: Jun 7, 2012

It is good if you aren't in a hurry, But I get a quite serious attitude while driving. The only exception is if the remaining range climbs up. And it gets me off my bike, because it is cheaper with the diesel, it consumes less, and I need less preparation gearwise. Such a shame that my Honda is reduced to a funtool, because it isn't actually so much fun.

Disclaimer: Opinions may vary, especially mine.

Filled it up yesterday after another 1000 km. The last 10 or so the estimated range quitted on me, so I got a bit nervous.
Afterwards more meandering.

Today I went for the Nordschleife to see how much economy is lost on the track.
A lot apparently (who would have guessed). I reset the computer at the gate and read out some data while slowing for the exit.

Because everyone was eager to get on the track, there was quite some traffic. 70hp aren't very much to pass a clio and a 206 estate.
A motorcyclist fell off his bike after avoiding a newer camaro and a Porsche (996 GT3) dented his roof a bit so there was some downtime. I managed a second lap and could have gone for a third if I'd went through, but I didn't want to overcook it.

First lap was sorta frightening and with the traffic
On the second run I had trouble finding the right gear for the long uphill section, but I managed to reduce understeer to a minimum.

The 342,5 was better in the caroussell, but maybe I was just more reckless with it.

Avoid people with AK on numberplate, they are constantly trying to murder you on the road

That isn't news to me.

I drove to school once following a bus spewing the muck in my face. Plate: AK-W ...

On other news, a bulb burned through, changing the

was a bit of a hassle, because the tiny enginebay is neatly filled with a ginormous diesel engine, battery and other stuff.

While changing the bulb the bloody clip for the hood rod broke off. It seems the C3 tries to emulate my old 323 where I needed a broomstick to keep the bootlid open.

Edit:
Went to the local dealer and got it replaced free of charge, I guess they want me to do the inspection there.
Last edited: Jul 18, 2012

I think I get why AKs want to kill GMs. On my daily commute most AKs just slot in behind me and go with the flow, but the GMs get on close and don't even overtake if I'm indicating right if its safe.

The consumption over all is now barely under 4l per 100km.

Last friday I went for a midnight run to Winterberg, the first joyride since I started work. Took me longer than expected but at least I found some snowlike stuff besides the road. Probably just the fog hitting the guardrails and stuff next to the road.

I'm still looking for a temp gauge but strayed away from the scangauge solution. With a new phone, Torque and a BT connector it would be more expensive but a functioning phone would be a plus. The analog version via Raid, VDO or sth is still too messy for my taste. Where to put it without falling into the ricepot?

Today I left for work in a bit of a hurry, forgetting all my hypermiling knowledge and going for a blast on the quite deserted roads. It wasn't that much faster (5min perhaps for a 36km commute) but it didn't cut into the range as much as I feared. Despite going at a good 100km/h instead of the 70+, I normally use.

Still, the sudden amount of torque at low revs still manages to mess with the intended line. I'm not that used to thrashing it I suppose.

This Monday the little C3 went all french on me.
After 5km @ roughly 100km/h and a roundabout, I mostly coasted downhill to match the speed with the upcoming posted limit of 70km/h, when after a left bend something clattered briefly (only once and it felt like the engine switched off). Immediatly afterwards I got an exhaust failure warning followed by a low oilpressure warning.

I pulled over into a busstop, figuered wtf I should do. After some seconds of contemplating I restarted the engine hoping to get atleast the warning signs again, but even they retreated.

I drove home without the radio to listen into the car, but everything went normal. At a fuelstation I checked the oil, added a bar to the front right tire and tried to read out the ecu for some errorcodes, but there weren't any.

Btw.: Autumn seemingly isn't the time to buy summer tires. I'm waiting a month now for some information on my ordered Michelin Energy's.

I'm intruiged by the airvents. It looks as though they diffuse the air as opposed to blowing it at you.

They spin around like eyeballs and are closed on the picture.