MWF said:
Got a sudden urge to make an oil drum BBQ.

I like it, that's my kind of random. I wonder if you could have a fan to suck the smoke away from the charcoal and up a chimney.

Well the plan is to build it with the smokestack coming out of the left hand side (ie the front) and also have a vent in the "firebox" at the other then fit some kind of battery-powered fan into the chimney to draw air through it to get the coals glowing* and stop the smoke going in your eyes. Then once it's warm enough and has stopped smoking either cook with the lid open or closed depending on what I am cooking. It may double as a smoker if I chuck a few of the right woodchips on it.

*Think back to Ringmeet and you get the idea.
WillDAQ: To use the technical terms: "the Mustang is to aerodynamics what horse shit is to fine dining"

Well, one of us is gonna have to change.

Rock paper scissors?
Or we just leave the elephant in the room?
Have you ever noticed that anybody driving slower than you is an idiot, and anyone going faster than you is a maniac? 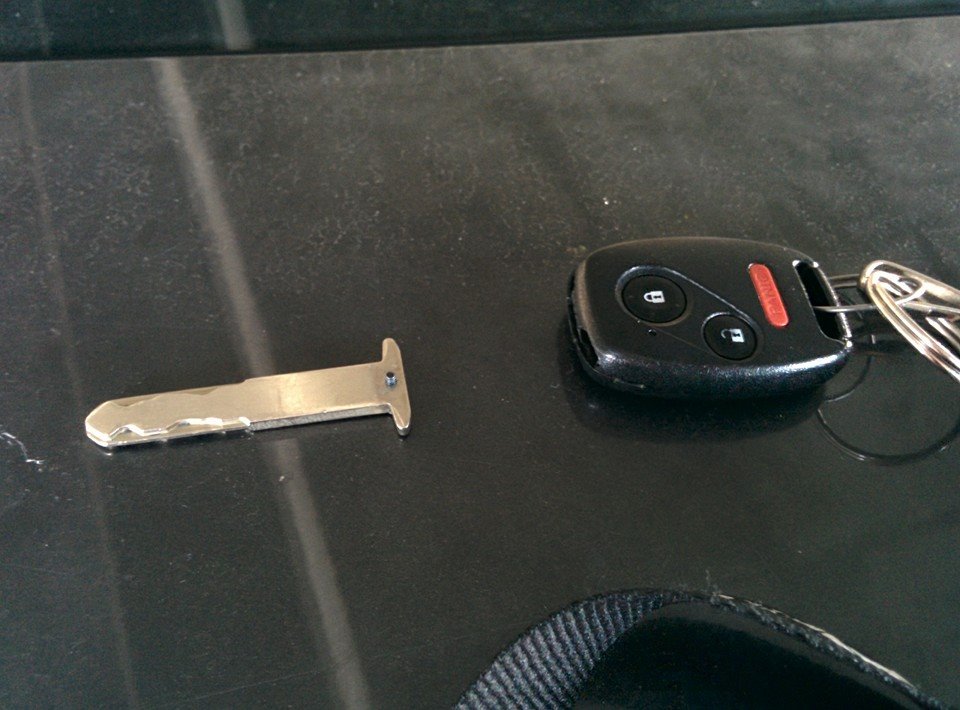 Key fixed with superglue, a screw, and duct tape. 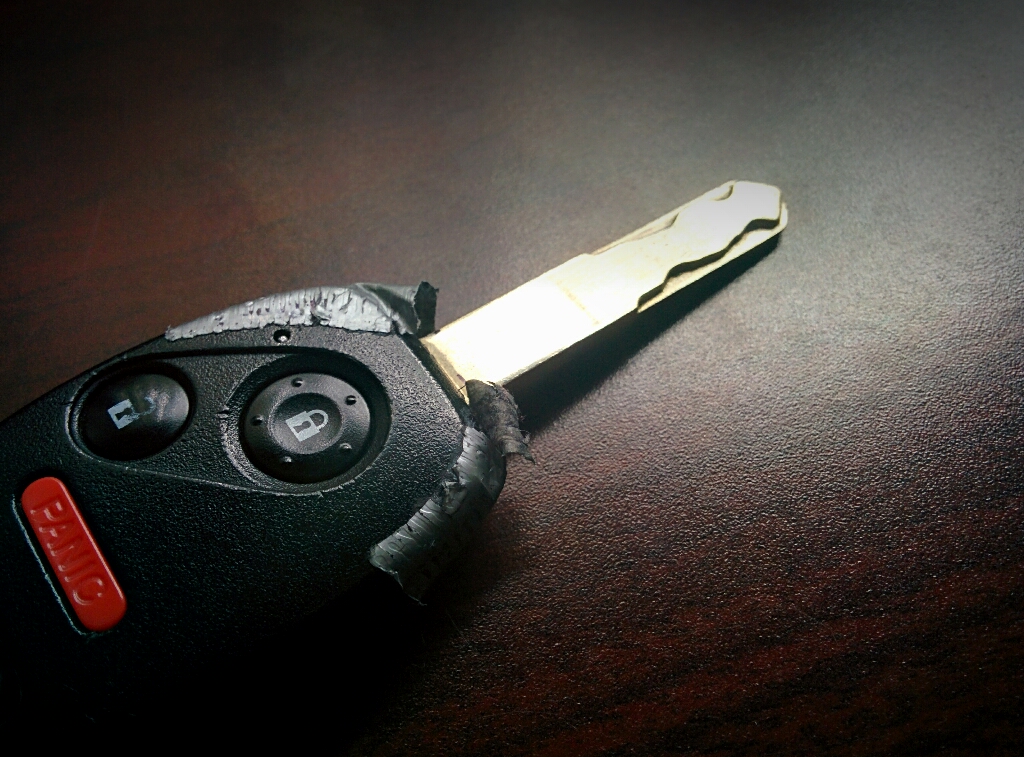 Did you press the panic button when it broke? That would be the perfect time to panic.

Yes and it didn't make a sound, but instead posted a picture to facebook about my woes and tragedies.
BlaRo: i'm a strong independent black woman....WHO DON'T NEED NO MAN

Anesthesia said:
Rock paper scissors?
Or we just leave the elephant in the room?
Click to expand...

Problem, my 22 year old fridge works fine but the ice maker leaks. And because it leaks that means big ass chunk of ice form in the bottom of the catch tray, and years of chipping it out manually have taken their toll... 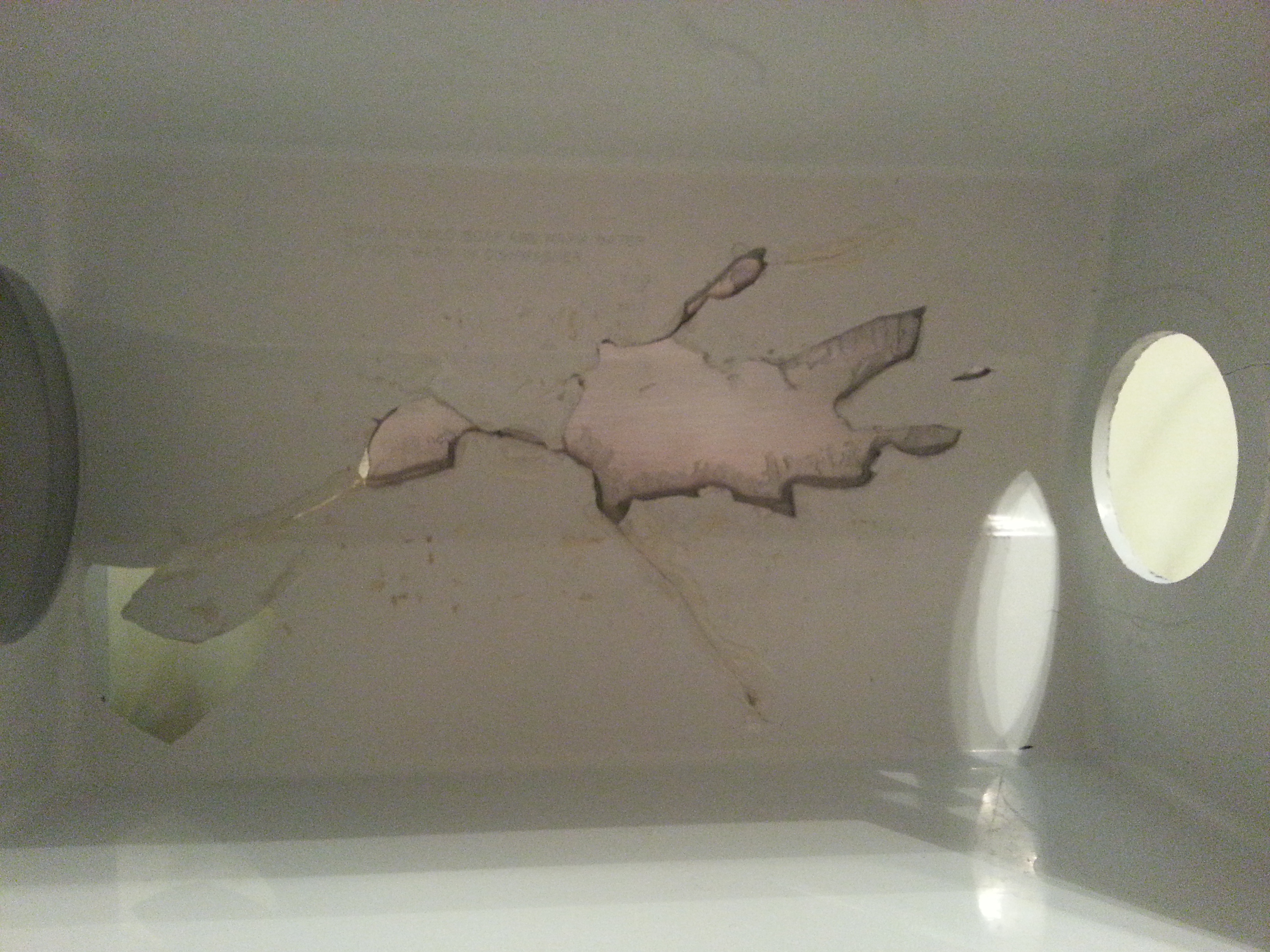 That's all missing chunk of plastic, what you can't really make out are all the cracks everywhere else. I've tried tape, super glue, hot glue, and even JB Weld and none of it held together longer than a month. And because I'm still a cheap bastard I decided to pull out all the stops and see if I can make a permanent repair for less than the cost of a new tray.

A sheet of aluminum cut and formed to match the contours of the bin, a shit load of Gorilla epoxy, and hot glue to fill in any gaps where water might seep into and freeze and I have this. If this doesn't hold together then I just give up. Once everything is cured I will line the inside with duck tape just as insurance against water seepage. 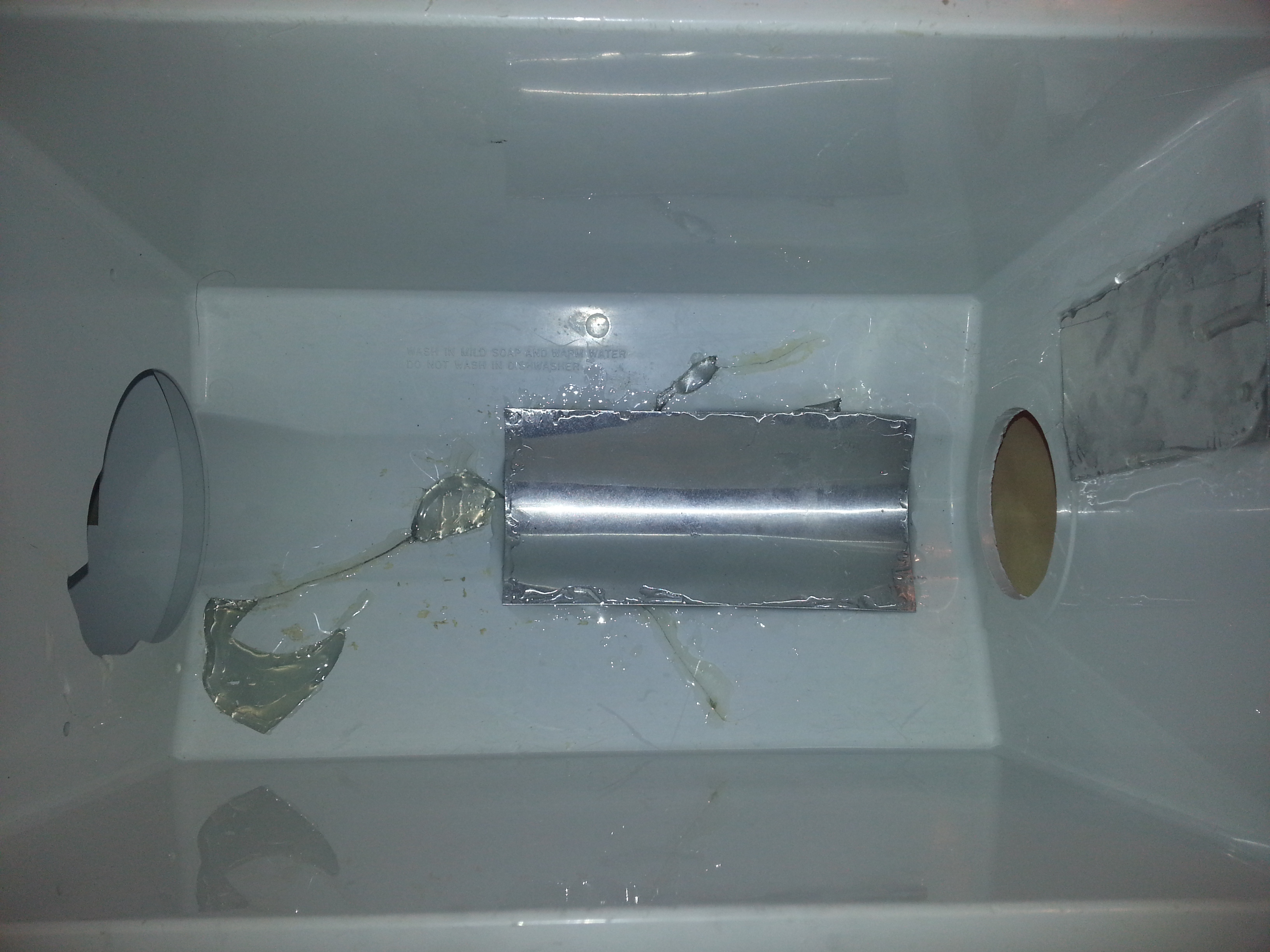 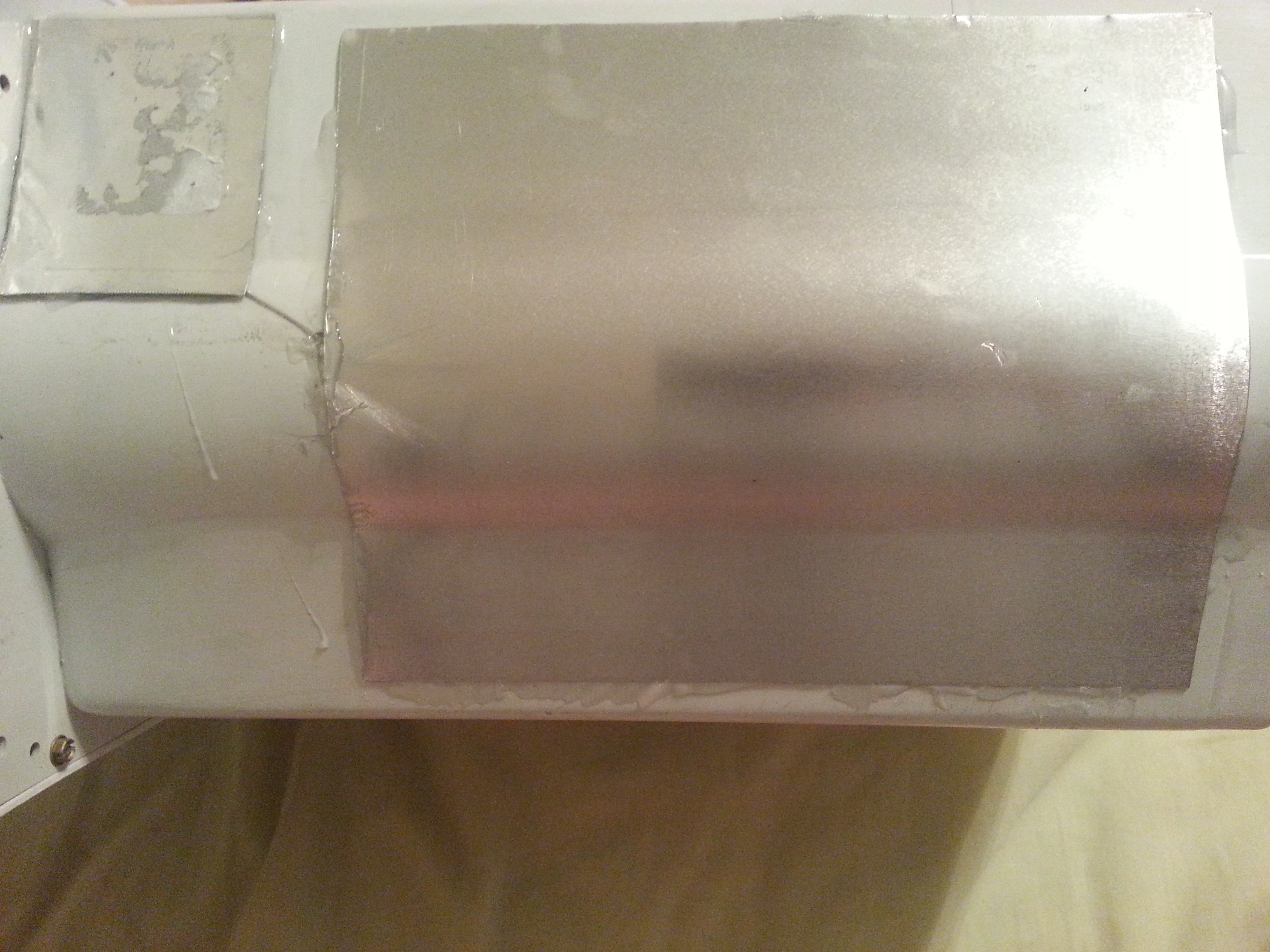 I rebuilt my downstairs toilet. Kept putting it off for 3 years, had to make it work because Kara's mother has a hard time going up stairs if they were to visit. It took me 1 1/2 hours of taking my time to make sure I did everything correct; If I was to do it again I am pretty sure I could do it in under a half hour.

What bugs me is that they were cheap toilets to begin with. My parents have never once replaced theirs and the house they live in was built in 1978. Mine was built in 2005 and they started have problems after 5 years.
LET | FOREVER | BE

The flush and fill valves were both leaking. Like I said, cheap toilets and they were also designed to be water savers. With the new one, I adjusted the flush valve flap so the maximum amount of water get used.

Regardless, Kara regards me as some sort of amazing handy man (

) who can fix anything; she grew up in a house where if something breaks, you call someone to fix it. I am thankful to blessed with mechanical aptitude so there is no way I would hire a plumber when I can rebuild one for $20.
Last edited: Mar 25, 2014
LET | FOREVER | BE

I've replaced the guts of more toilets than I can count, reseating a toiler however... hasn't gone so well. Over 10 years ago my dad was getting out of the shower and got tripped up somehow and went crashing down onto the front of the toilet and cracked 2 or 3 ribs. He was a big guy like me so he actually pulled the toilet up and off its perch a bit, when I tried to repair it (take it off, new wax ring, bolts ect ect) it just ended in disaster. Several years later I asked my cousin to come over (who works construction for a living) to help me take another crack at it, and we got the job done in a couple hours.
The Mighty Buick Of Destruction.

Since it's spring, that means the grass is already growing, and that means I had to come up with a better fix for my broken mower. 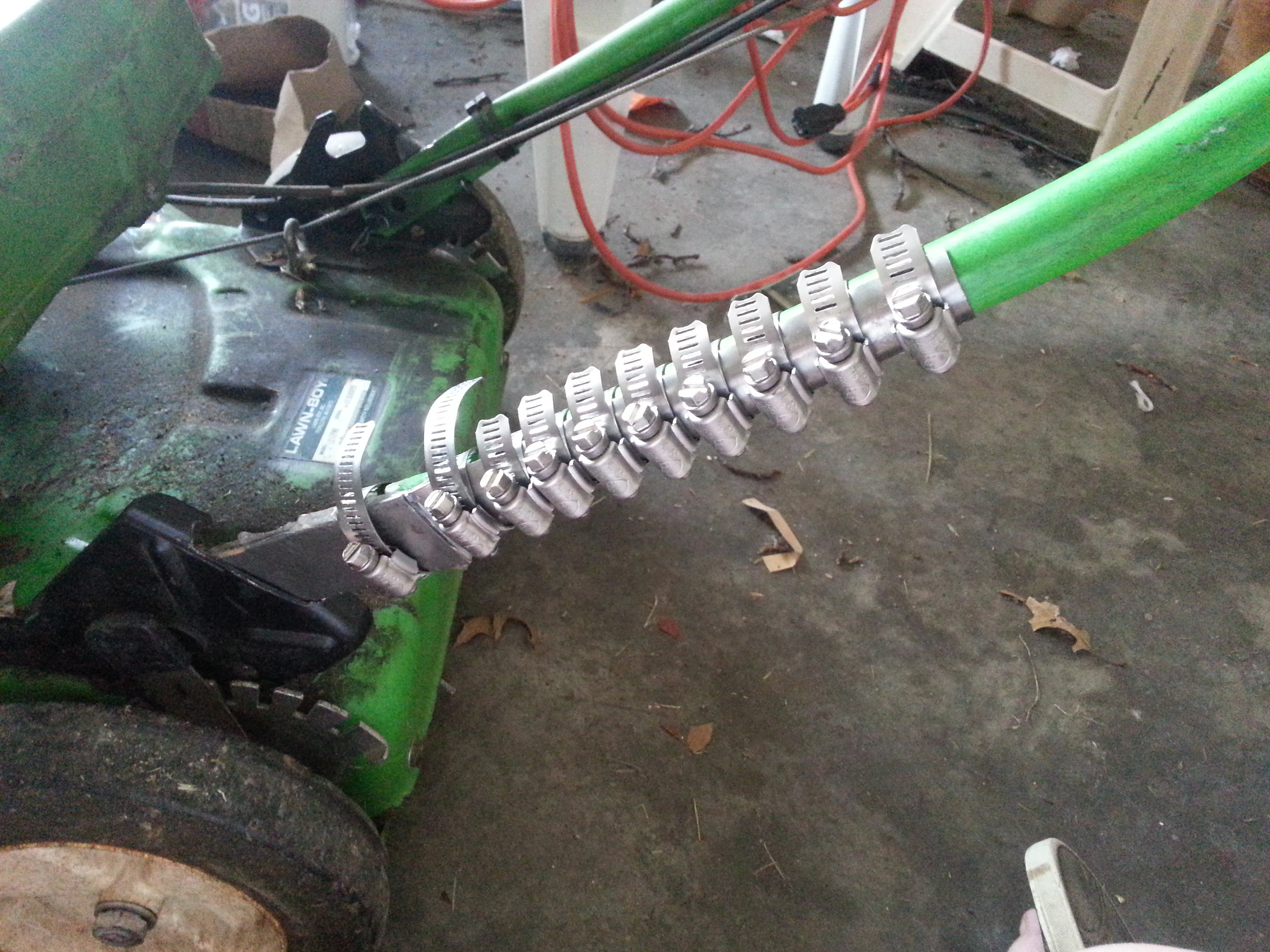 More strips of steel, more clamps, all epoxied together. Just more, bigger and stronger, we'll see how it holds together when it's put through its paces.
The Mighty Buick Of Destruction.

Time/effort vs. reward. I'd say it's time to buy a new handle for that Lawnboy.
I'd search Craigslist for someone who does lawnmower repair and see if they have any handles laying around. Offer them $10.

This isn't really a "MacGyver" but I took my 15+ year old beard trimmer completely apart. Cleaned all the little whiskers out of everything, motor included. Did a little work on the blades with my whetstone and 3-in-1 oil. Put her back together and she works like new!

Plus I get to enjoy the manly fragrance of 3-in-1 oil when I'm trimming.
"I was sad because I had no shoes, until I met a man who had no feet. So I said, ?Got any shoes you're not using??

So v2.0 of the mower repair worked... for about 20 seconds after I put real stress to it. So I took one more crack at it, and this time I didn't hold back and made sure it would never happen again. 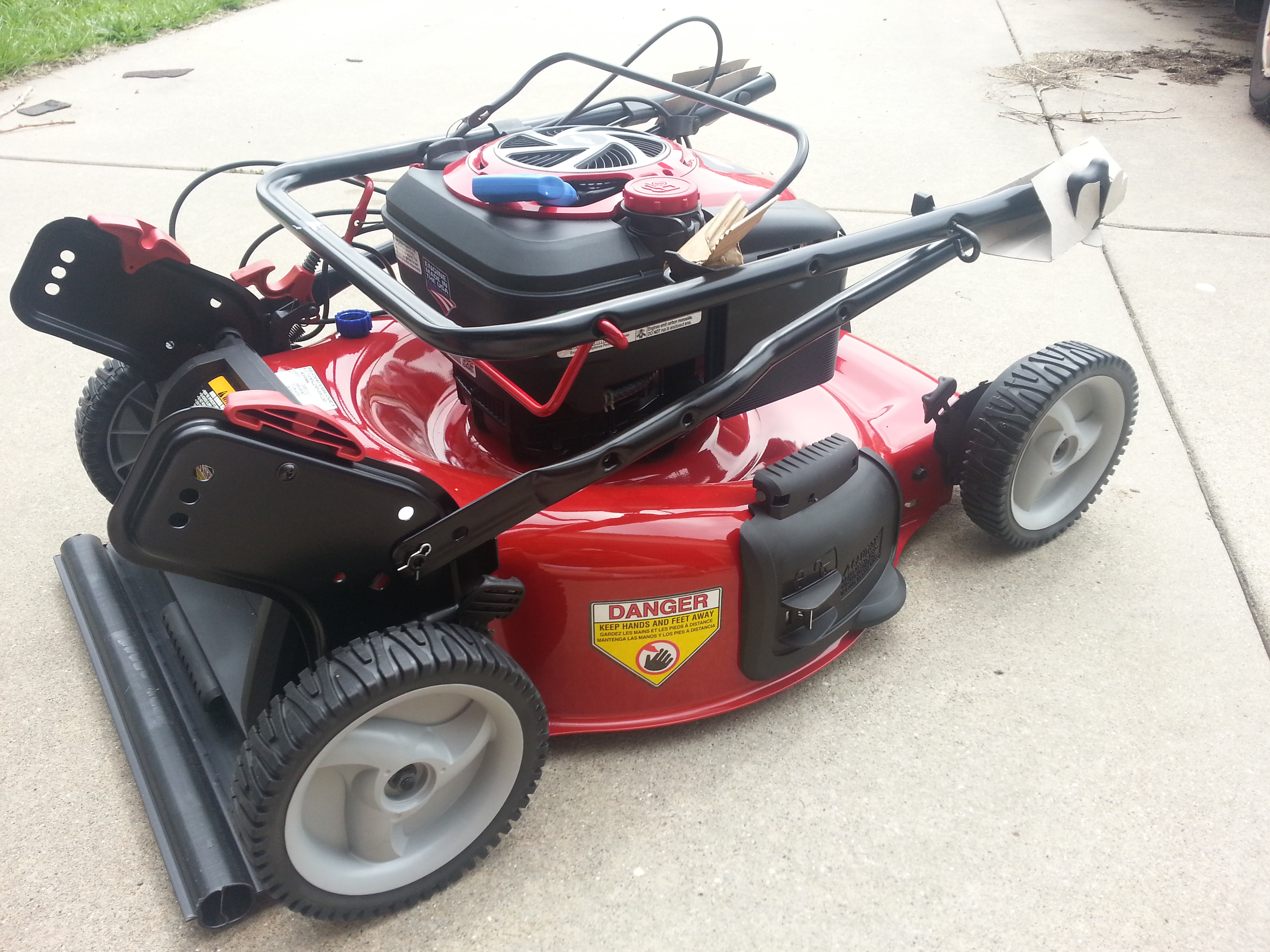 Now that I'm not under the gun to get it fixed, I am taking another legit shot at fixing it, this time with electrical conduit. My original idea involved a pipe of some sort, but it was all too heavy and hard to work with, till I talked to my mechanic when I asked if he could weld the original broken bits back together. Turns out he had the same problem as I did some years ago and he showed me how he used the conduit to fabricate a new handle for his mower. It's (should be anyway) strong enough to handle the abuse but can be cut and bent with simple tools. I already have the new piece fabricated, but I need access to a bandsaw to cut a notch out of it, pics to follow soon.
The Mighty Buick Of Destruction.

First thing I did was use a pipe cutter to remove the remaining end of the original handle that was bent and twisted so I had good straight metal to start with. Then I cut the conduit down to size and stuck one end of it in my vise so it could be compressed flat. After I drilled a hole in it, I was left with this. 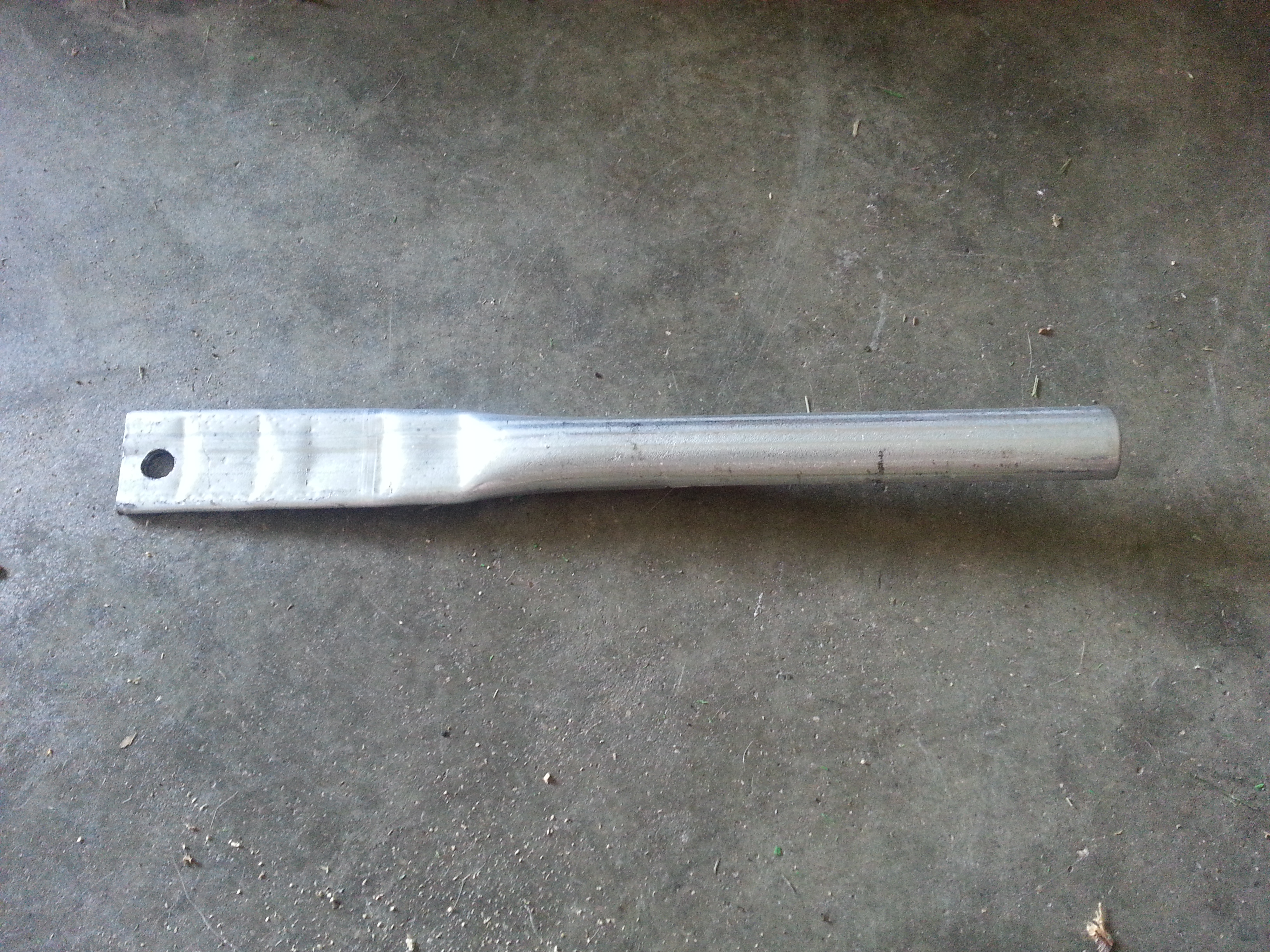 I then used my dremel and some cutoff wheels to slice off half of the upper part of the tube. 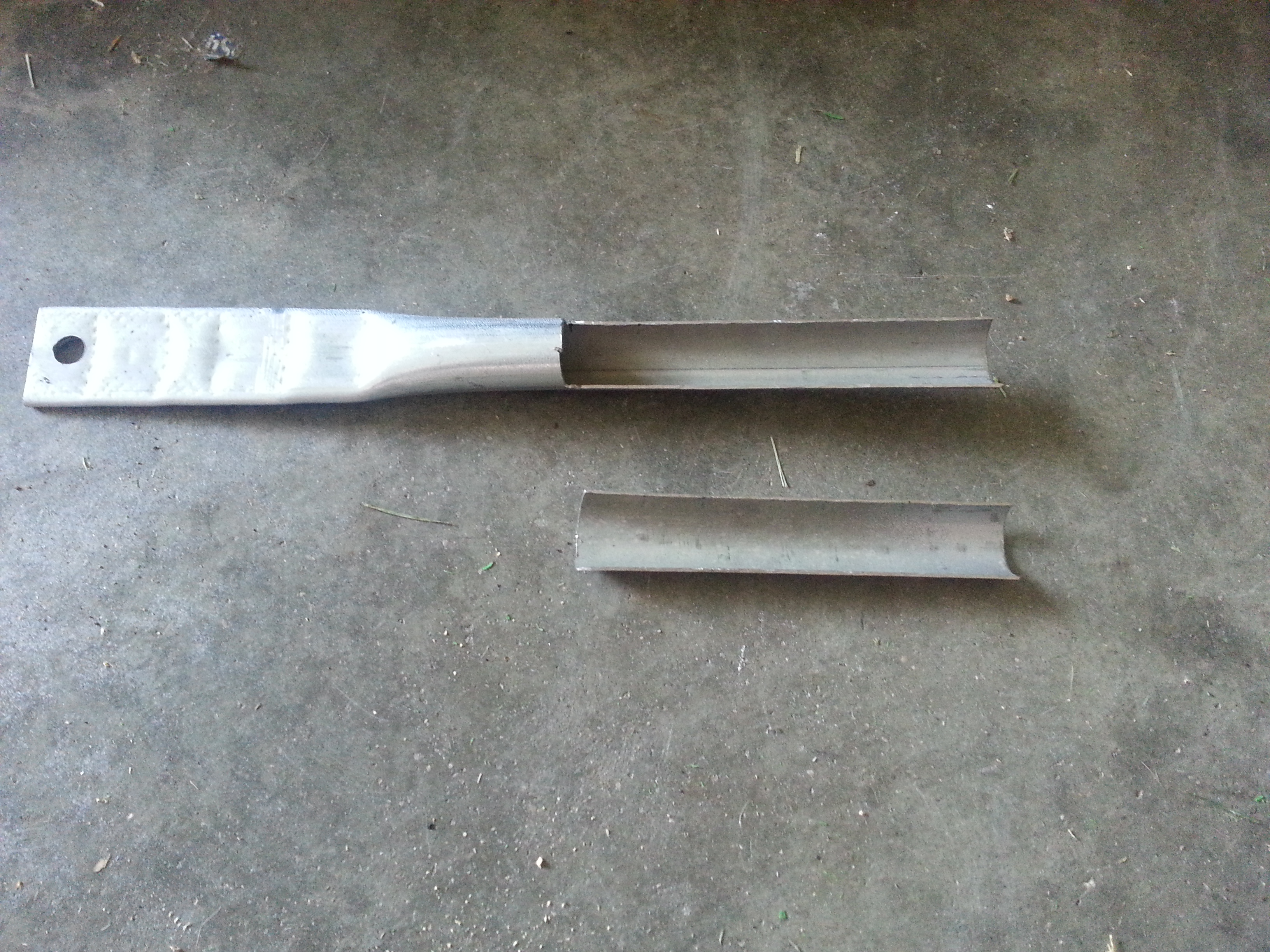 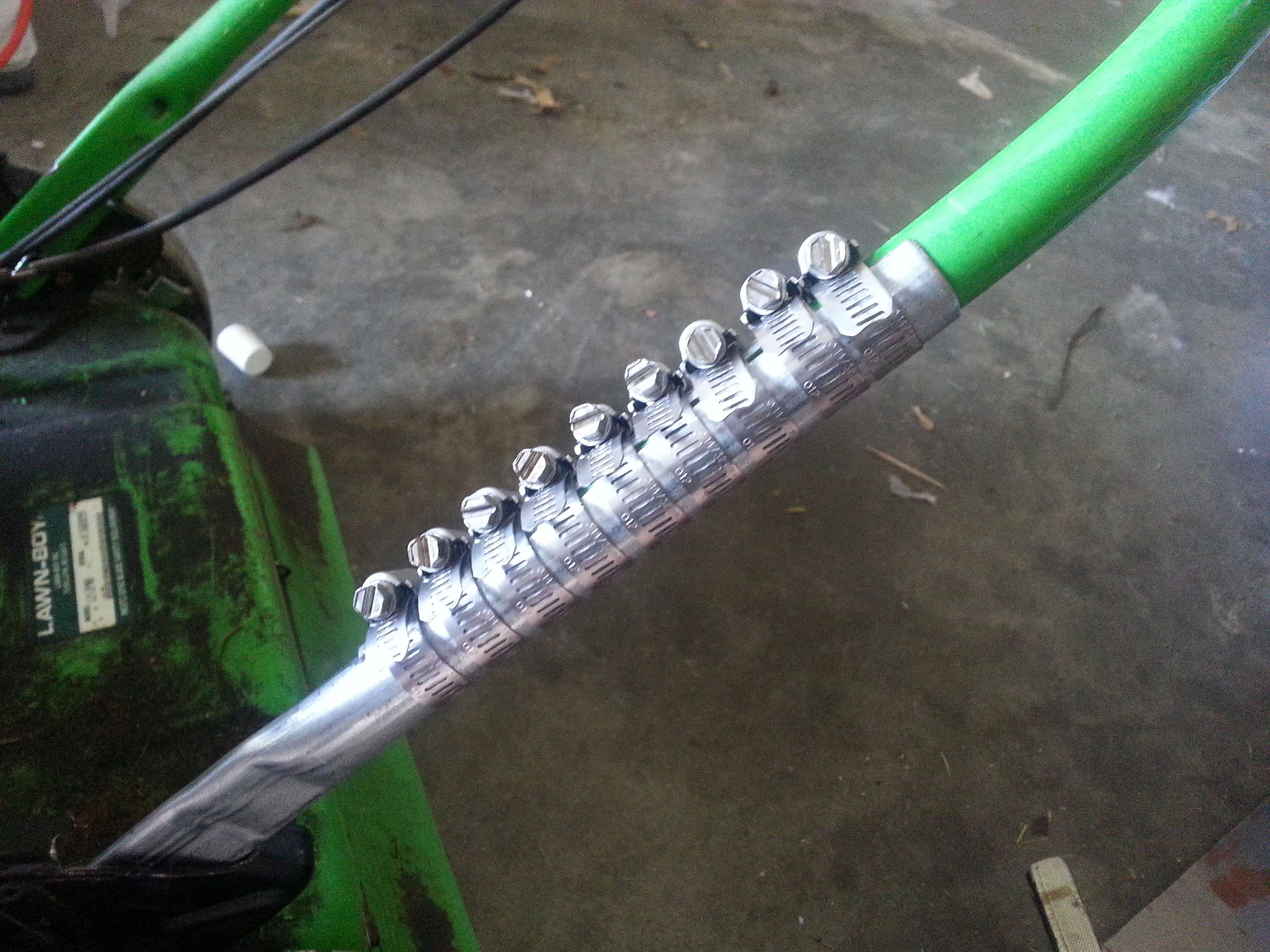 Macguyvering is one of the best activities in life.

I remember having "fixed" an electric kitchen. Well...

A friend had tried to use the electric kitchen in a rented apartment to heat up the pitcher of an electric kettle. Bad idea, the bottom of the thing melted down and released "a lot" of water on the kitchen. Power out. It wouldn't work anymore. We let it settle for a whole day, but it wouldn't work anymore anyway, and we were hungry with just raw meat to eat.

So, I shut the power down (water and electricity... you know...), unscrewed the kitchen with a table knife (in the dark), held it open with two bog rolls and two forks, turned the power on again and dried the thing up with a hairdrier.

It worked like a charm, though it's not exactly a "fixing".
Going fast out of rage, pride or boredom is like buying a ticket to crash.

That must be a huge knife to unscrew the whole kitchen...
"I wish for an America that matches the marketing materials.” - @HardcoreHistory

SirEdward said:
Macguyvering is one of the best activities in life.

I remember having "fixed" an electric kitchen. Well...

A friend had tried to use the electric kitchen in a rented apartment to heat up the pitcher of an electric kettle. Bad idea, the bottom of the thing melted down and released "a lot" of water on the kitchen. Power out. It wouldn't work anymore. We let it settle for a whole day, but it wouldn't work anymore anyway, and we were hungry with just raw meat to eat.

So, I shut the power down (water and electricity... you know...), unscrewed the kitchen with a table knife (in the dark), held it open with two bog rolls and two forks, turned the power on again and dried the thing up with a hairdrier.

do you mean stove or oven?
My car is dark grey not black!

It was just the kitchen hob.

I took out the four screws holding it to the supporting kitchen table (and that was done in complete darkness), and four more screws holding the upper and lower panel of the appliance together. That was semi-darkness.