This isn't really a fix so much as it's a solution to a problem.

I bought my first floor jack last week, but the lift pad is a cup design with four little notches around the lip, since the jacking point for my Buick is a pinch weld, I can't use it as is without causing damage. 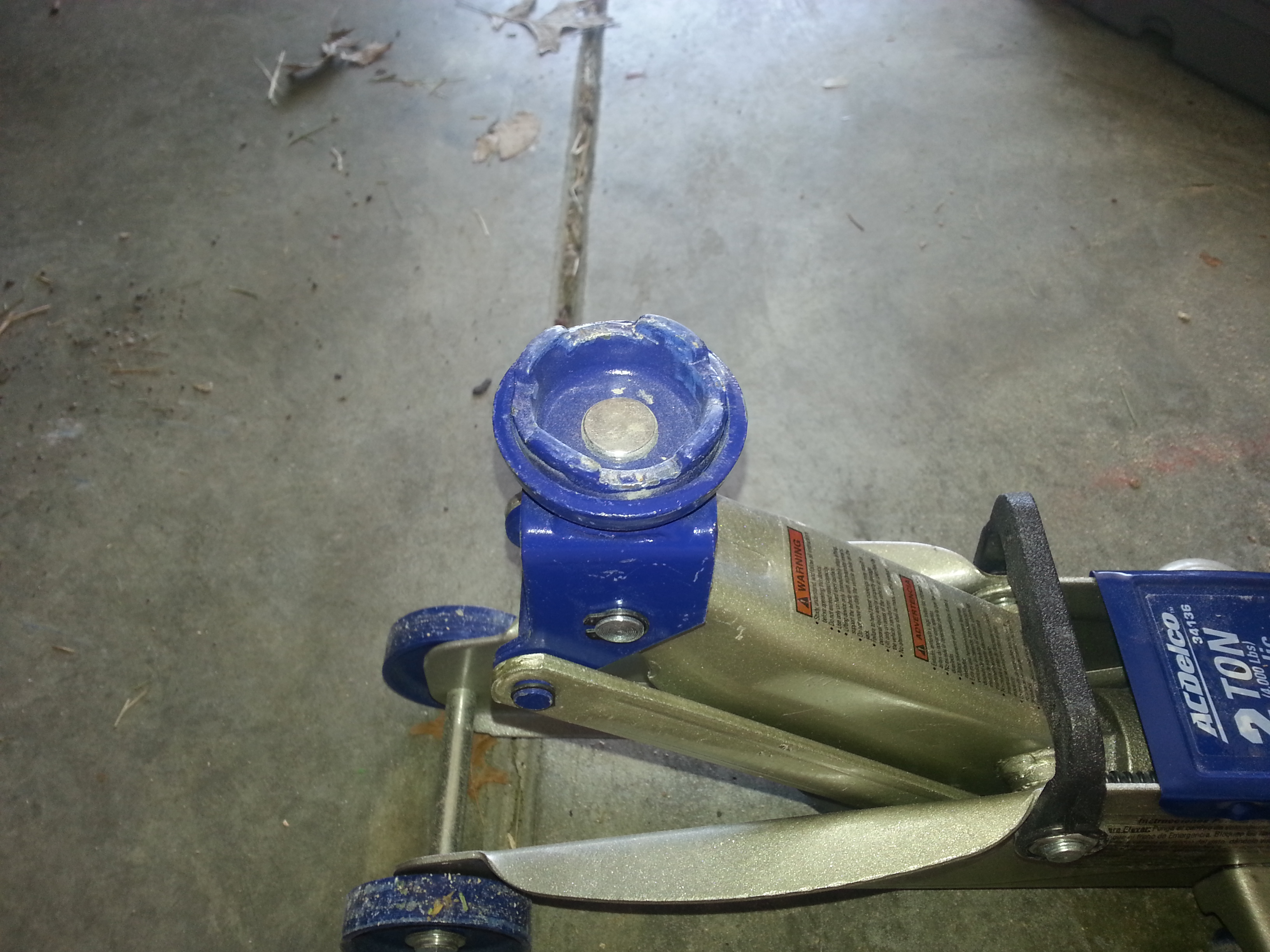 So the first thing I tried was making this out of some scrap wood and spend some time shaping it with my dremel. 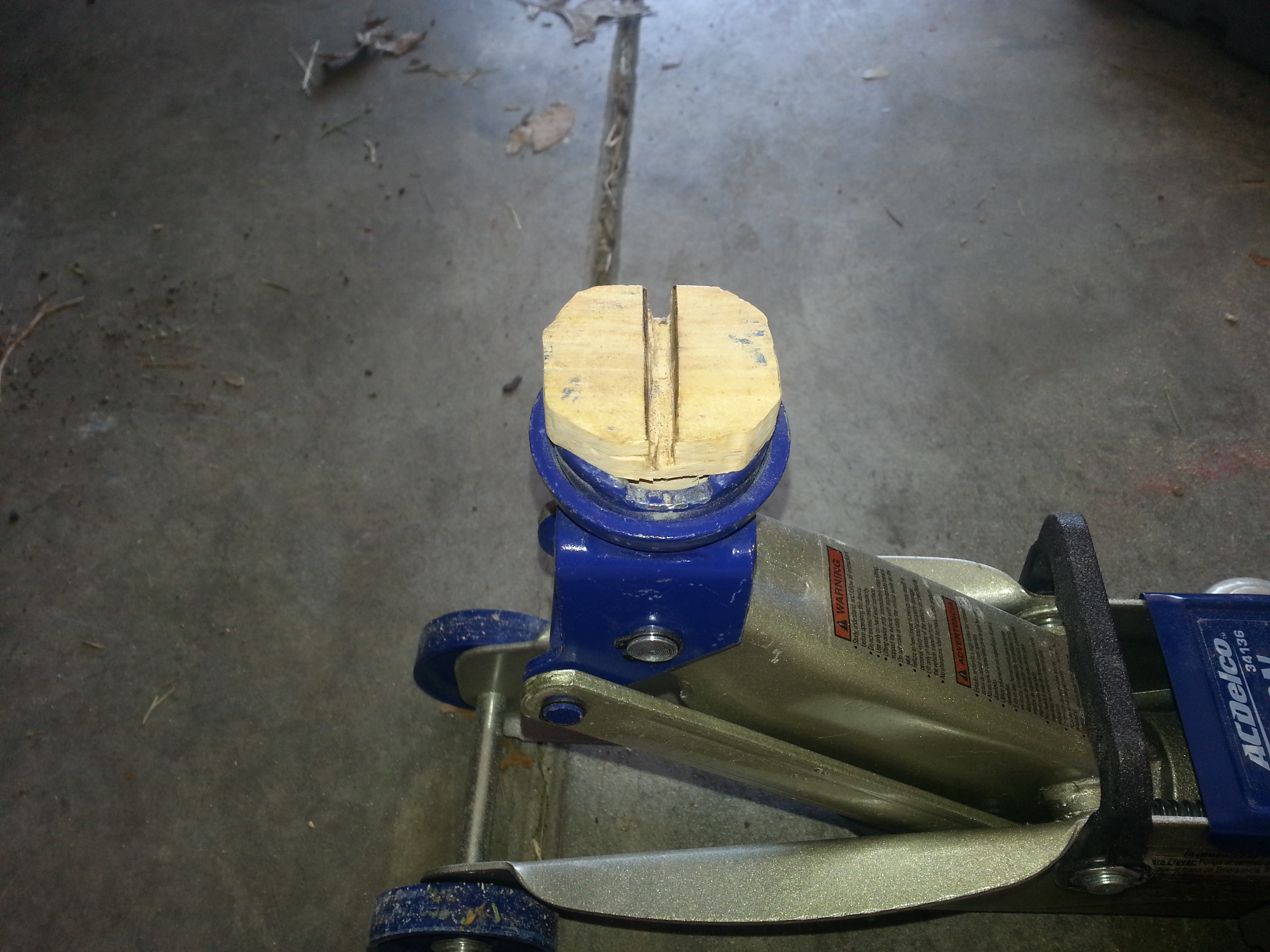 It worked, but my gut told me to build something stronger. So today I took some of the leftover electrical conduit from the Lawnboy repair, used an old railroad spike and hammer to form it into something of a V shape, and then I made four notches on the underside so it could sit in the cup and not rock back and forth. So far it's working like a charm. 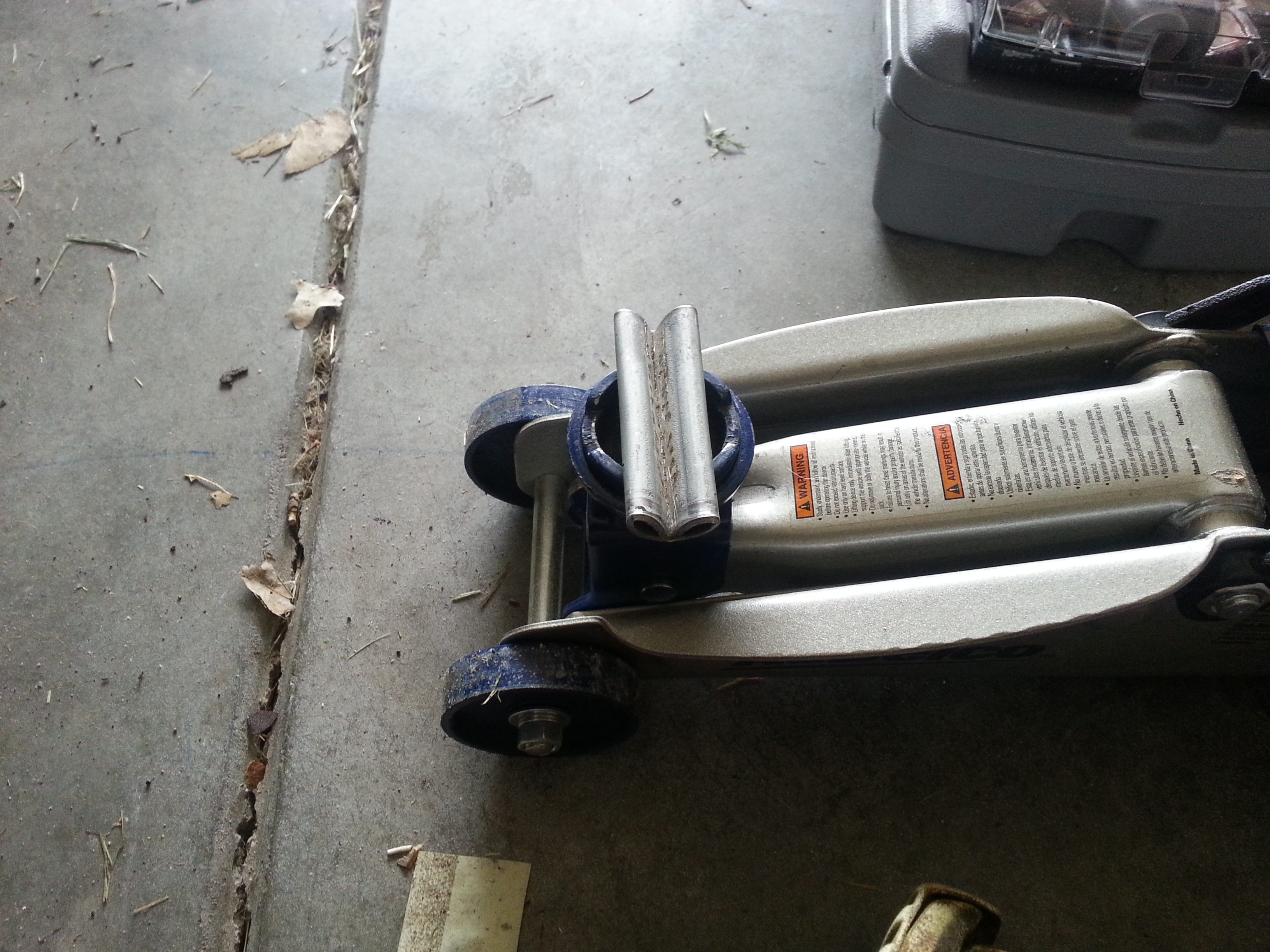 It's been a while, so I'll give some updates on how my repairs are holding up.

Chair - I've had it break on me two more times, but in other locations, I'll probably take pictures and explain those repairs tomorrow. I think the last time something snapped on it was in June.

Ice tray - Still holding strong, but I did end up adding a layer of 1/8th inch plastic over the aluminum inside the tray. I wanted to protect it from getting any punctures for an ice pick or anything like that.

Lanwboy - I wound up giving it to my sister a few days after I finished the repair, and she's reported zero issues with it.

I've also replaced two ceiling fans that gave out after two decades of service, and a few days ago I had to replace a faulty power outlet that apparently got overloaded by a space heater. I don't know exactly what happened, but there were clear burn marks on it and the wiring coming out of the wall, it also killed the power to all the other outlets in the room but not power to the overhead light. So I got a new socket, snipped off the bad wiring and got it all hooked up, and there's been golden.
The Mighty Buick Of Destruction.

I'm not sure if this is a MacGyver fix or not, but the drawers in my kitchen are pretty narrow, 10" to be exact, and my flatware holder was 11.5"

5 minutes with the dremel

This isn't really an improvised fix, but still I'm proud of myself.

My clothes washer turned 23 years old this month, and on Friday while it was working on load of towels I heard it make some odd noise when it switched to the spin cycle, but I didn't think much of it. But when I opened the lid I saw that everything was still soaking, so I set it for another spin... only nothing was moving. The motor was running but the tub wasn't going round and round. After fearing I'd have to be spending $700 or more on a new washer, I made a post on an appliance repair forum about the issue and started doing research. I thought maybe the transmission is what had gone out, but they suggested it was the coupler. A few minutes with my toolbox and... yep. 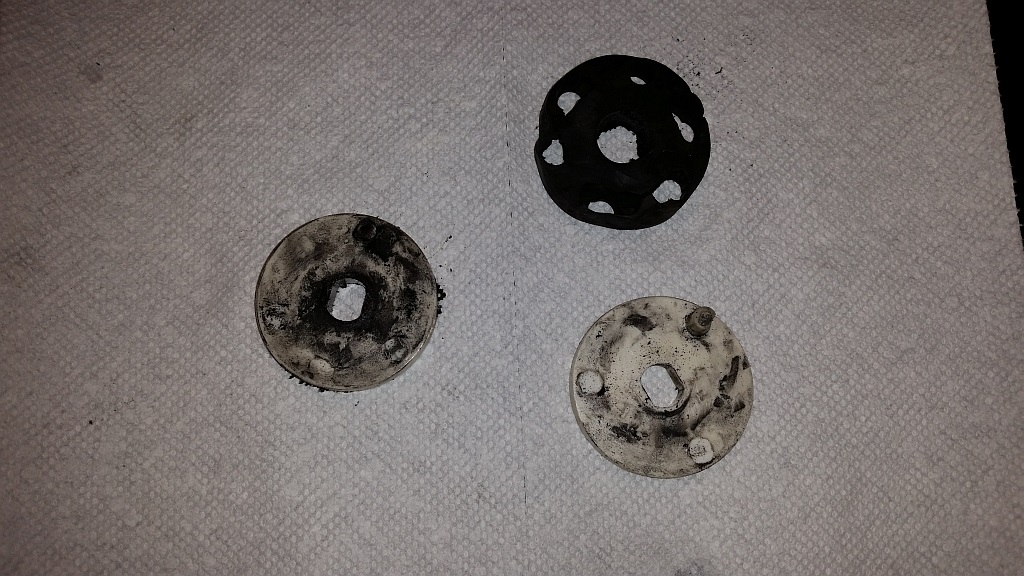 The black rubber bushing shouldn't look like that, and the two plastic bits should have three prongs sticking out of each of them, not 1. So I have a new kit on order for $17, which is a hell of a lot better than the $180 if it was the transmission.
The Mighty Buick Of Destruction.

I've forgotten more of my "repairs" than I remember. Here's a couple I have evidence of:

Sheared all the lugs off my E36, so I just drilled a new bolt pattern next to them and put in some studs 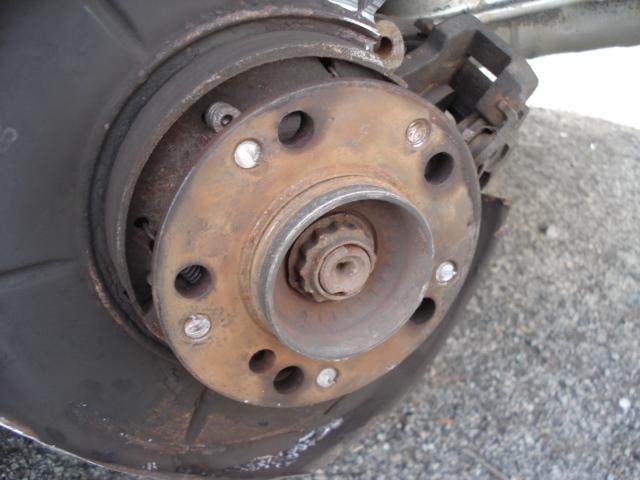 Bent my control arm and it kept bending while I was trying to limp the car home. Ratchet-strap did the trick. 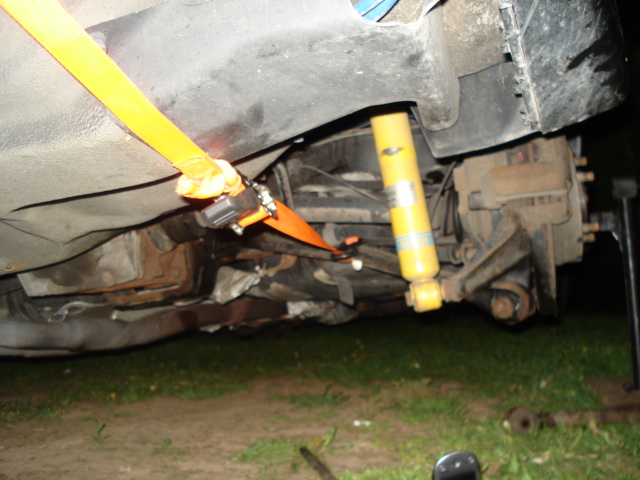 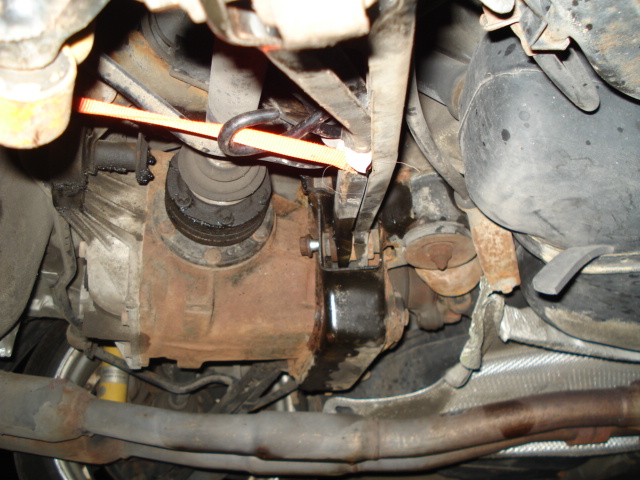 you must have a mullet
there really is no other way

This isn't a fix so much as a straight up MacGyver creation. My dad bought our first gas grill something like 25 years ago, and he opted to get the rotisserie kit for it as well, only we never once used it. That grill is LONG gone now, but we kept the kit anyway, but it couldn't be used with the next grill we bought or the one I bought after that. Until I got a wild hare up my ass last night to see if I could MAKE it work with my Weber. 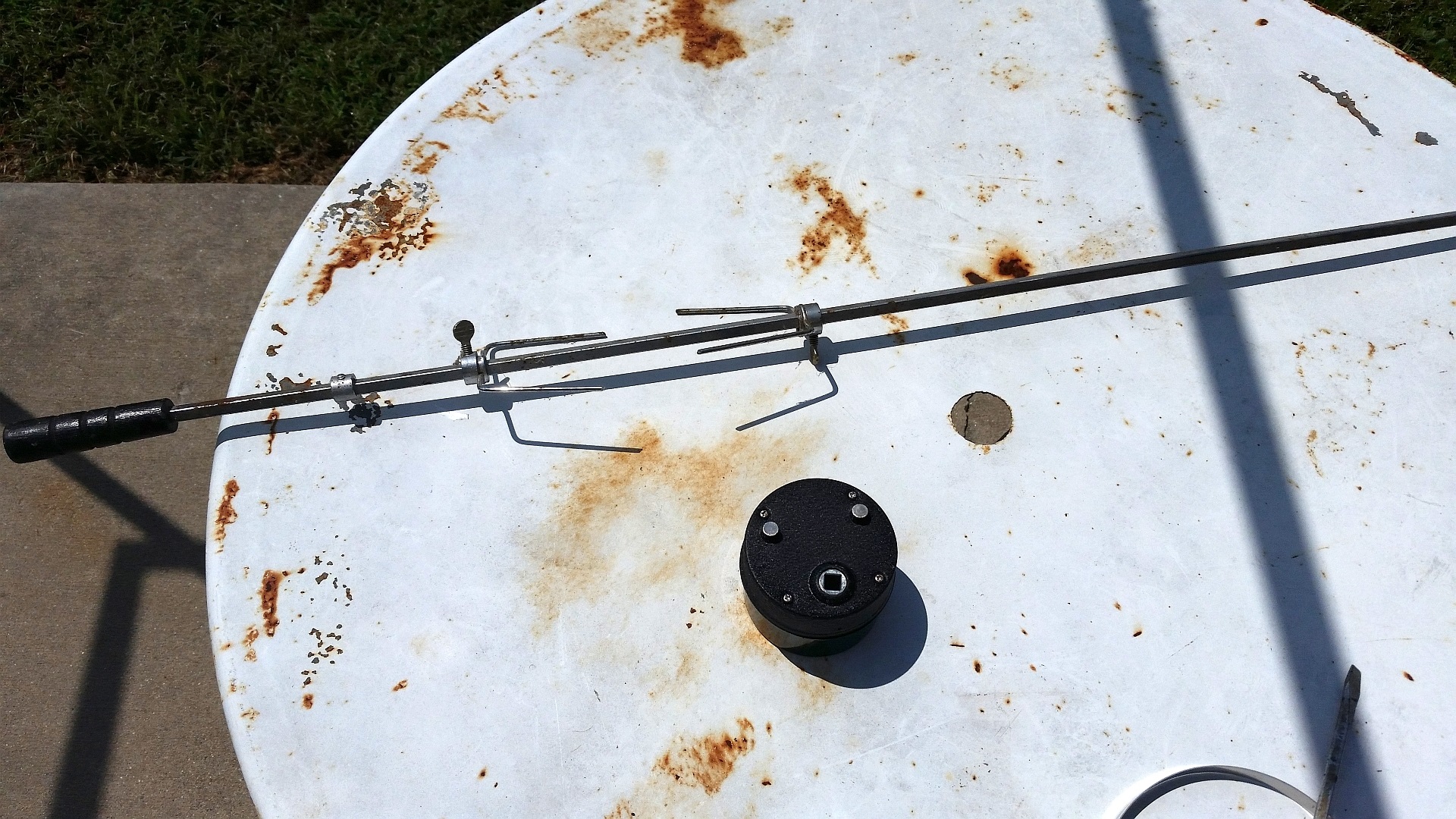 I found the spit and the motor in my garage, but no sign of the power cable for the motor, so I went through every AC adapter I had in the house and by luck the one that powers my DVD DR was compatible. Once that was squared away, I had several other problems to deal with, and I solved them using nothing more that what's on the table here. 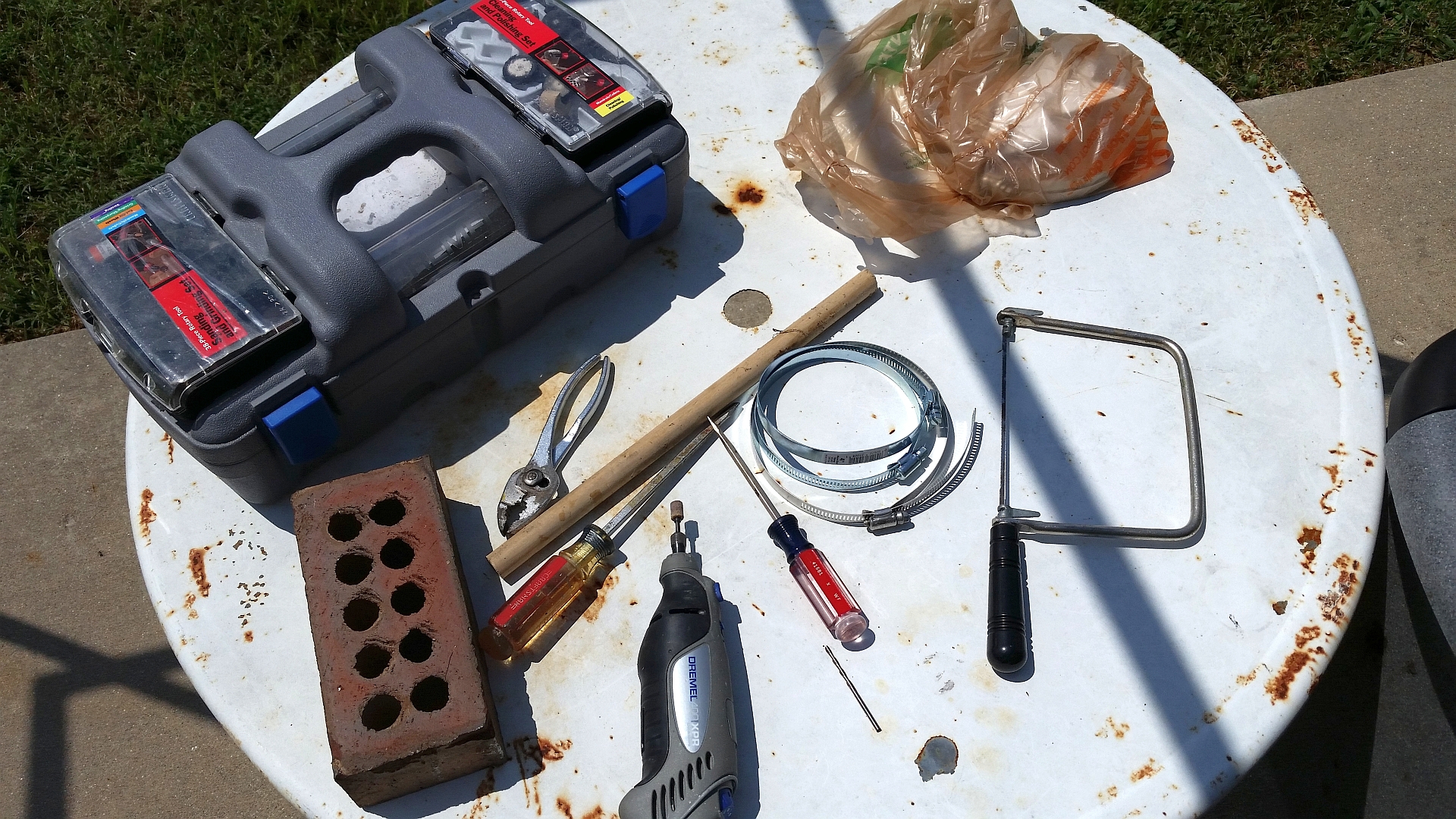 My trusty Dremel, some screwdrivers, dowel rod, coping saw, a brick, and some hose clamps. Using the dremel I rounded off half inch sections of the shaft so it could now spin freely in the grooves. 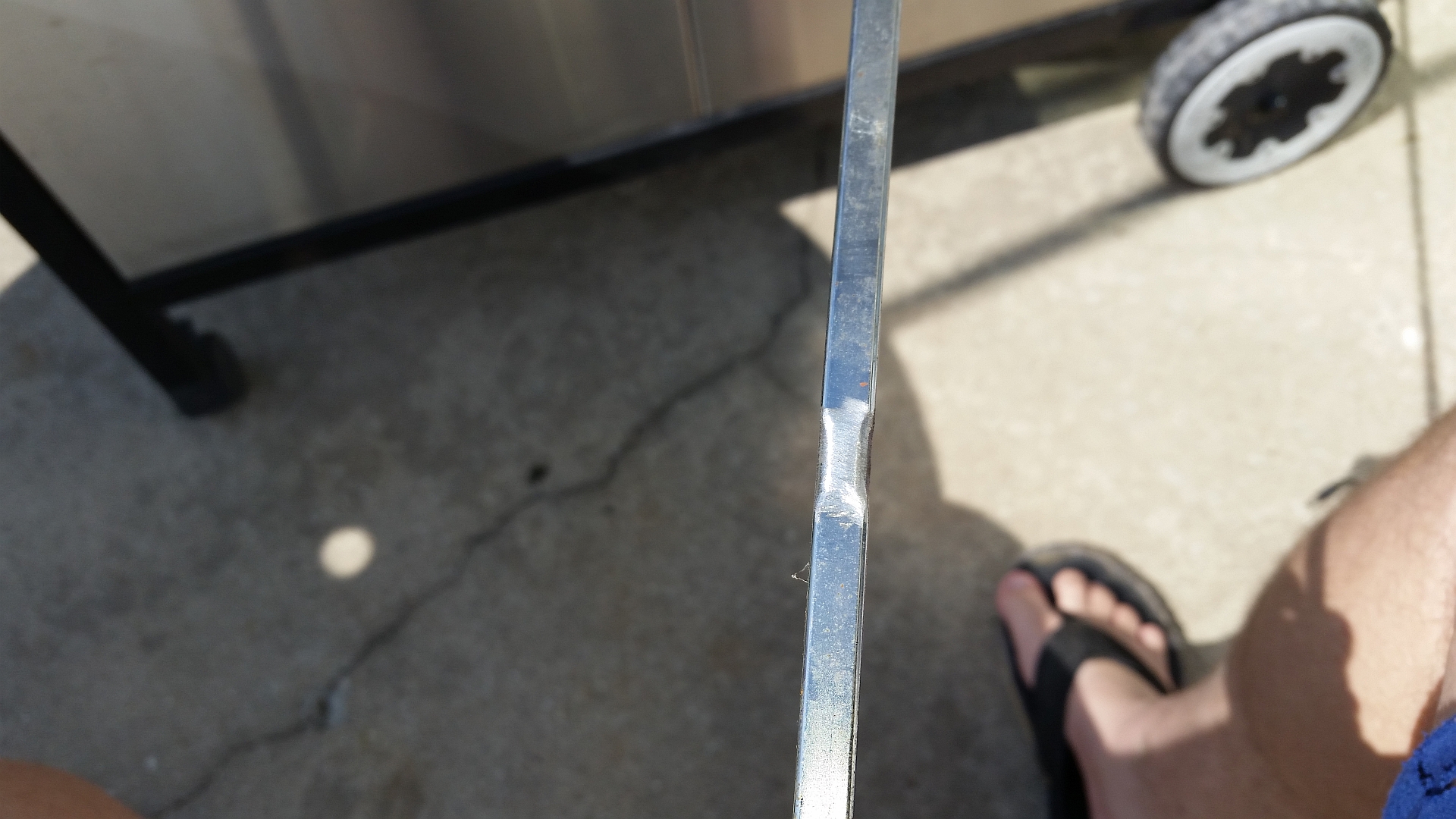 I cut off some of the dowel rod, strapped it to the motor with one of the hose clamps, this allowed it to have a firm mounting point that wouldn't let it just spin around the shaft. The rod goes into one of the holes, another hose clamp to secure the motor to the brick itself. 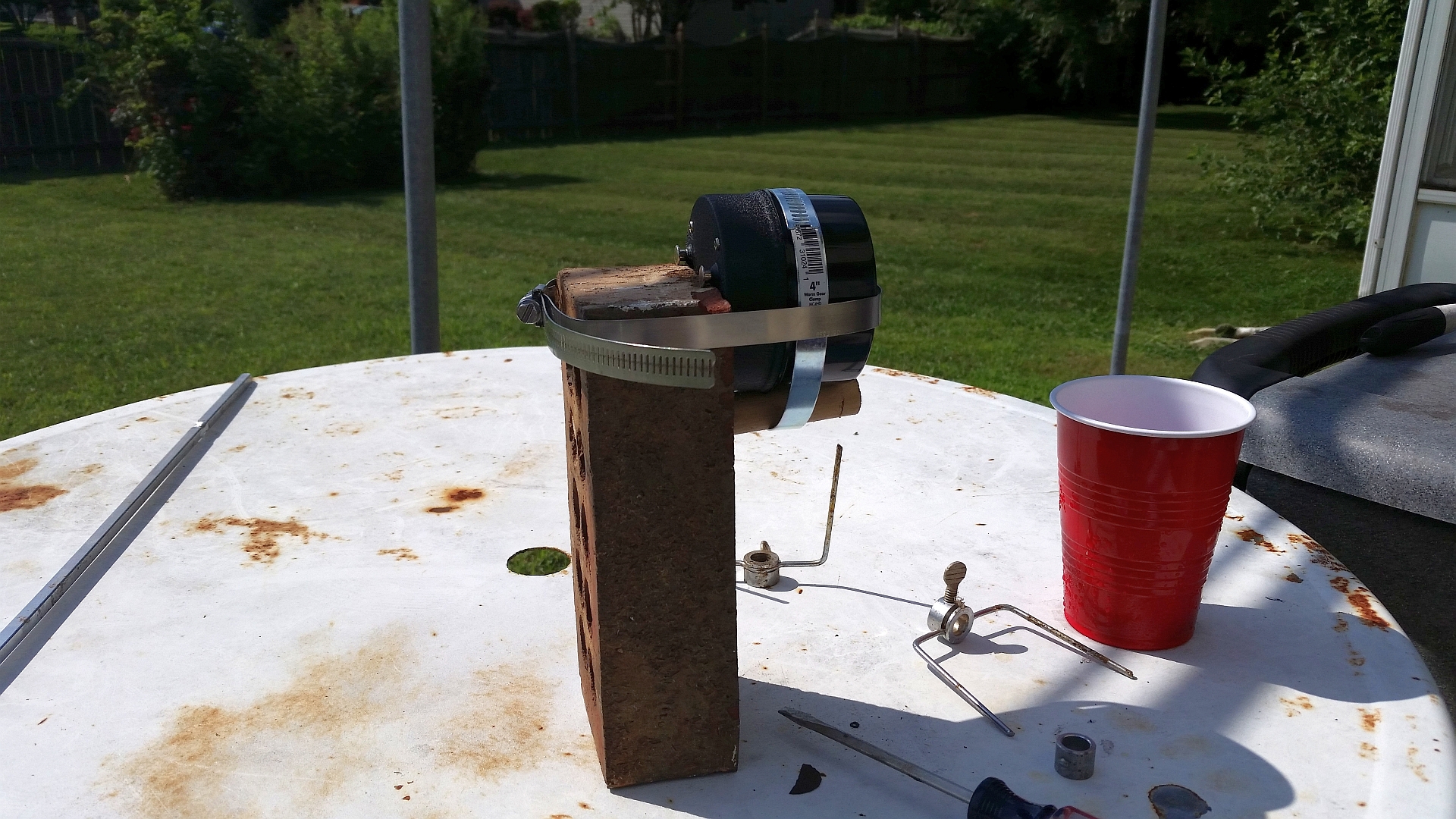 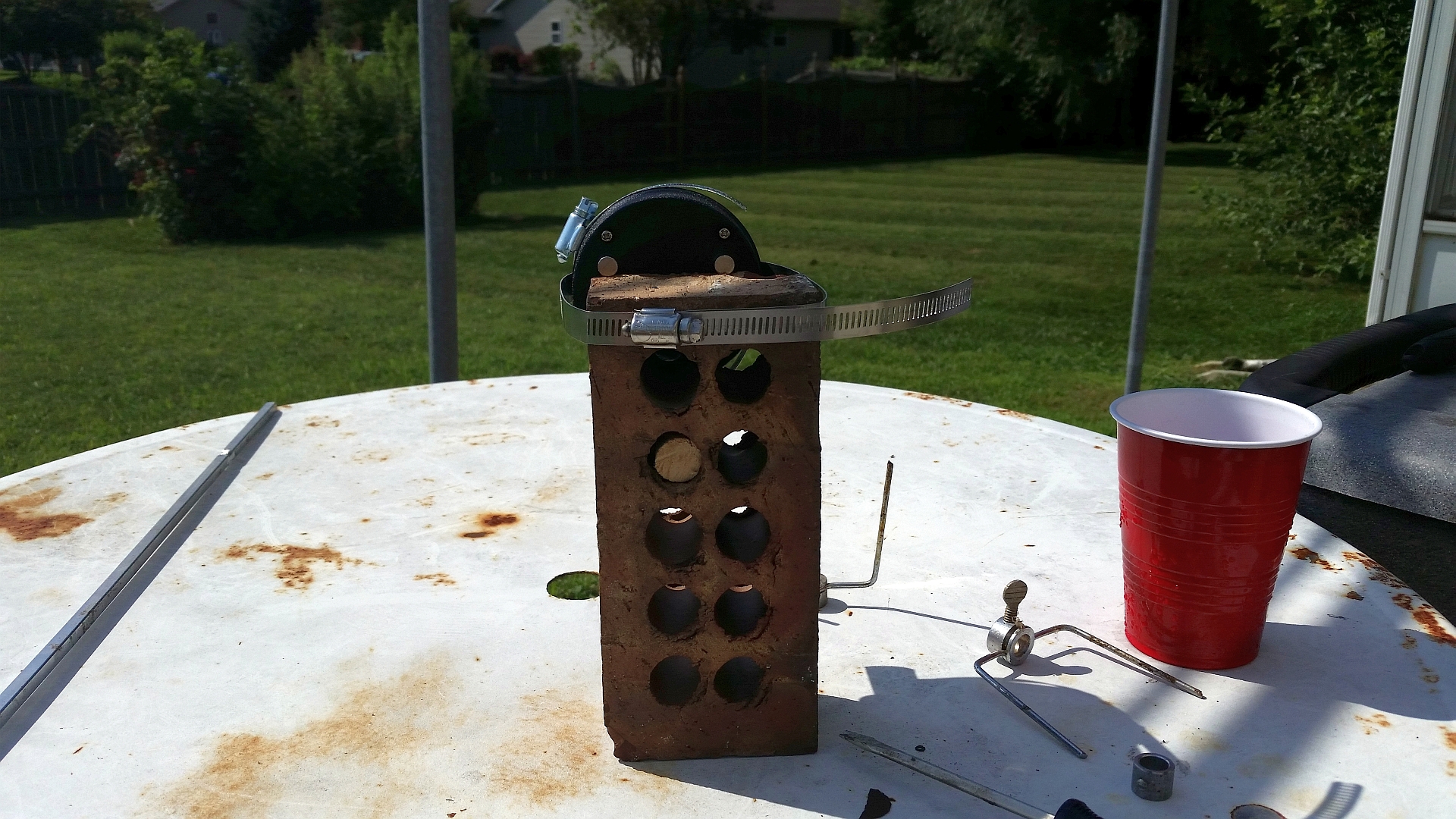 Charcoal tastes better.
"I wish for an America that matches the marketing materials.” - @HardcoreHistory

No more leaky water valve for my boiler! 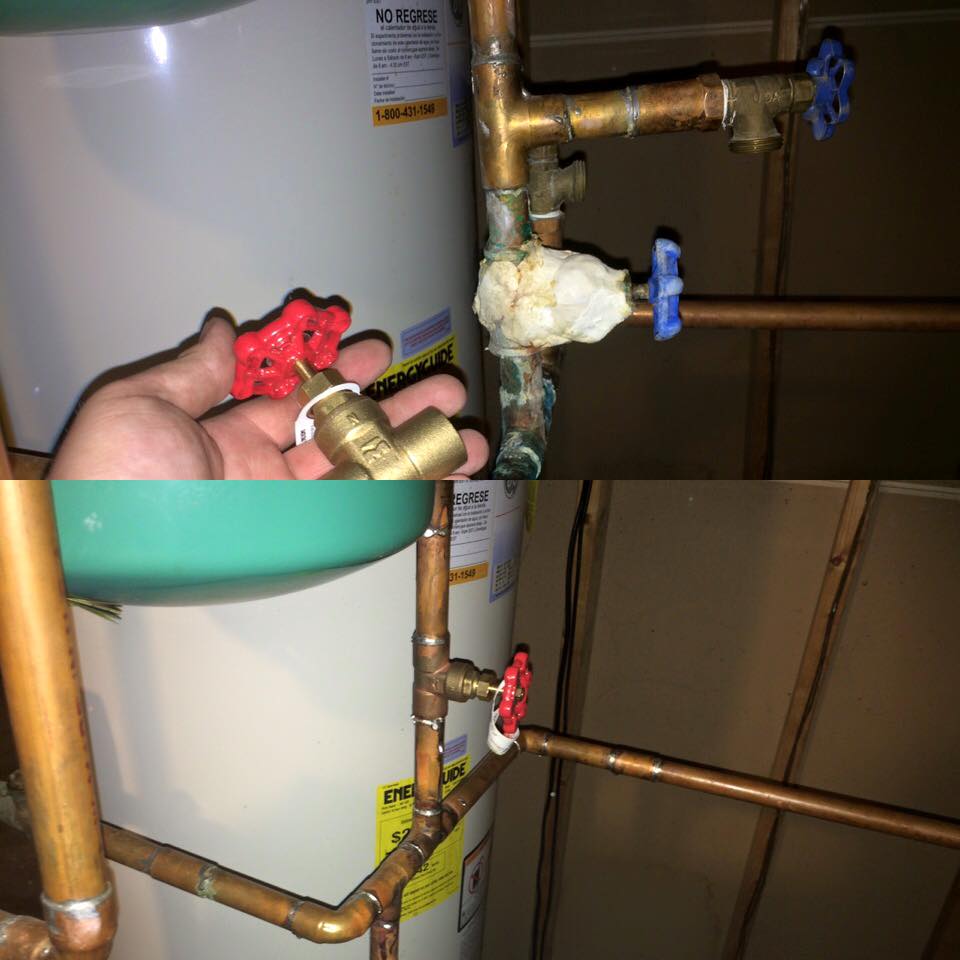 The rig worked out pretty well all things considered, it did stop on me at one point though but I got it turning again. So I've worked it over some more with the dremel to further round and smooth things off, I also plan to dab a little oil in each groove to hopefully cut down on the friction even more.
The Mighty Buick Of Destruction.

My rotisserie setup worked a few days later when I tried cooking 2 chickens together, but when I tried it again last week the motor just gave out. I don't know if it was just too old or if it wasn't rated for the weight I was putting on it. So just for fun I decided to rip it apart and see if I could construct something stronger that would work, and I came up with this using the gear from the original motor and various pieces of my dad's old Erector Set.

From the side it looks fairly simple. 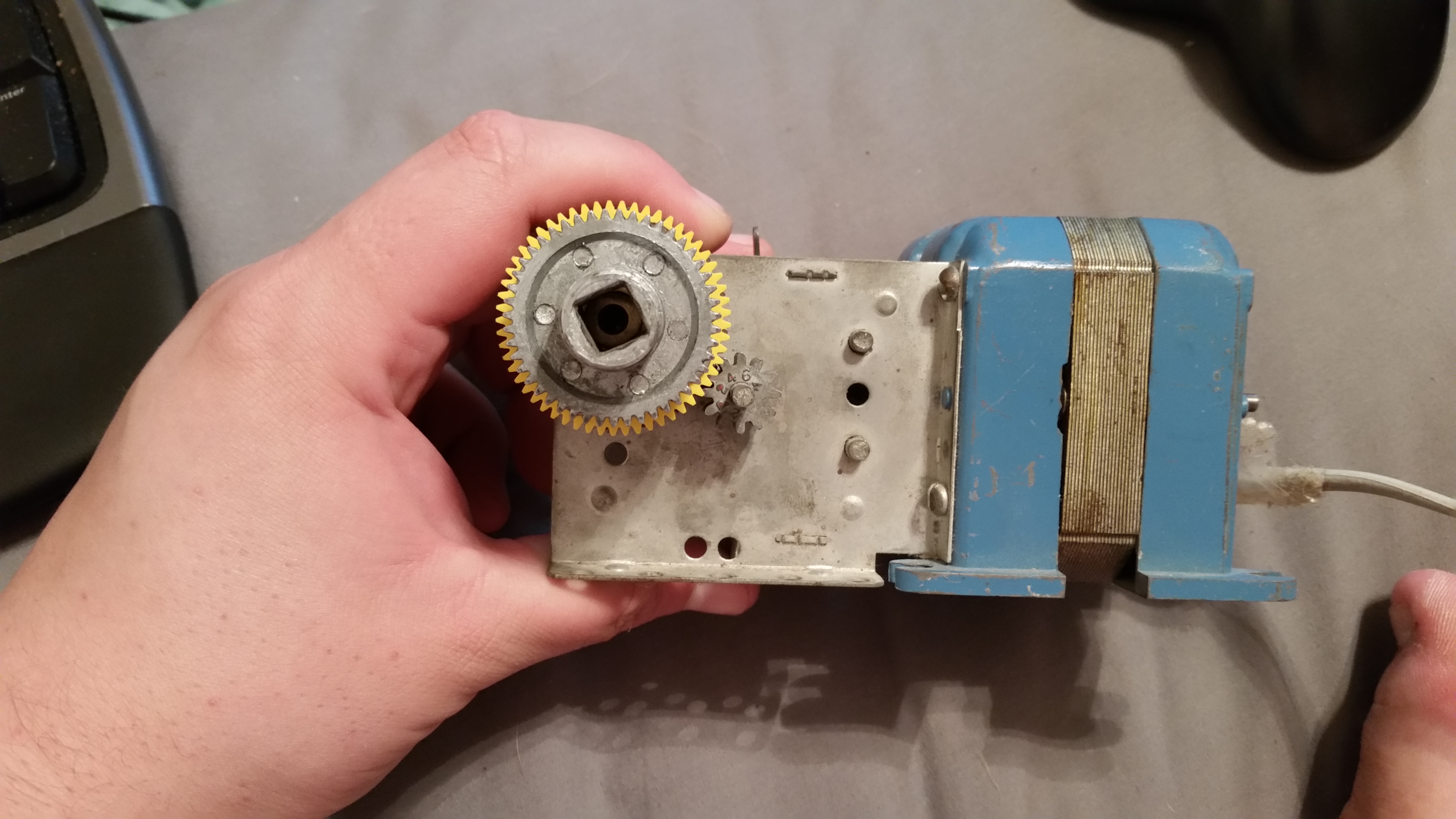 From the top however...

It would take forever to explain all of what I did, but it involved a lot of time spent with my dremel. Basically the silver gear slips over the yellow gear and is bolted in place, then the yellow gear is bolted to a metal gear with a spacer wheel sandwiched between them. The shaft is only secured to the spacer wheel because it needs something to spin on, the force is transferred through the metal gear directly to the silver one. Sounds complex I know, but it does work.
The Mighty Buick Of Destruction.

Up to version 6.0 now, totally revised from the original.

For starters, there's a new motor I got off Amazon that has a 25lb weight capacity, so that shouldn't be an issue. I've spent a lot more time with the dremel to round off and smooth out the areas of the spit where it sits in the grooves.

I drilled a hole in the handle so I could stick a long bolt through it, this along with some large washers now makes for an adjustable counterweight. 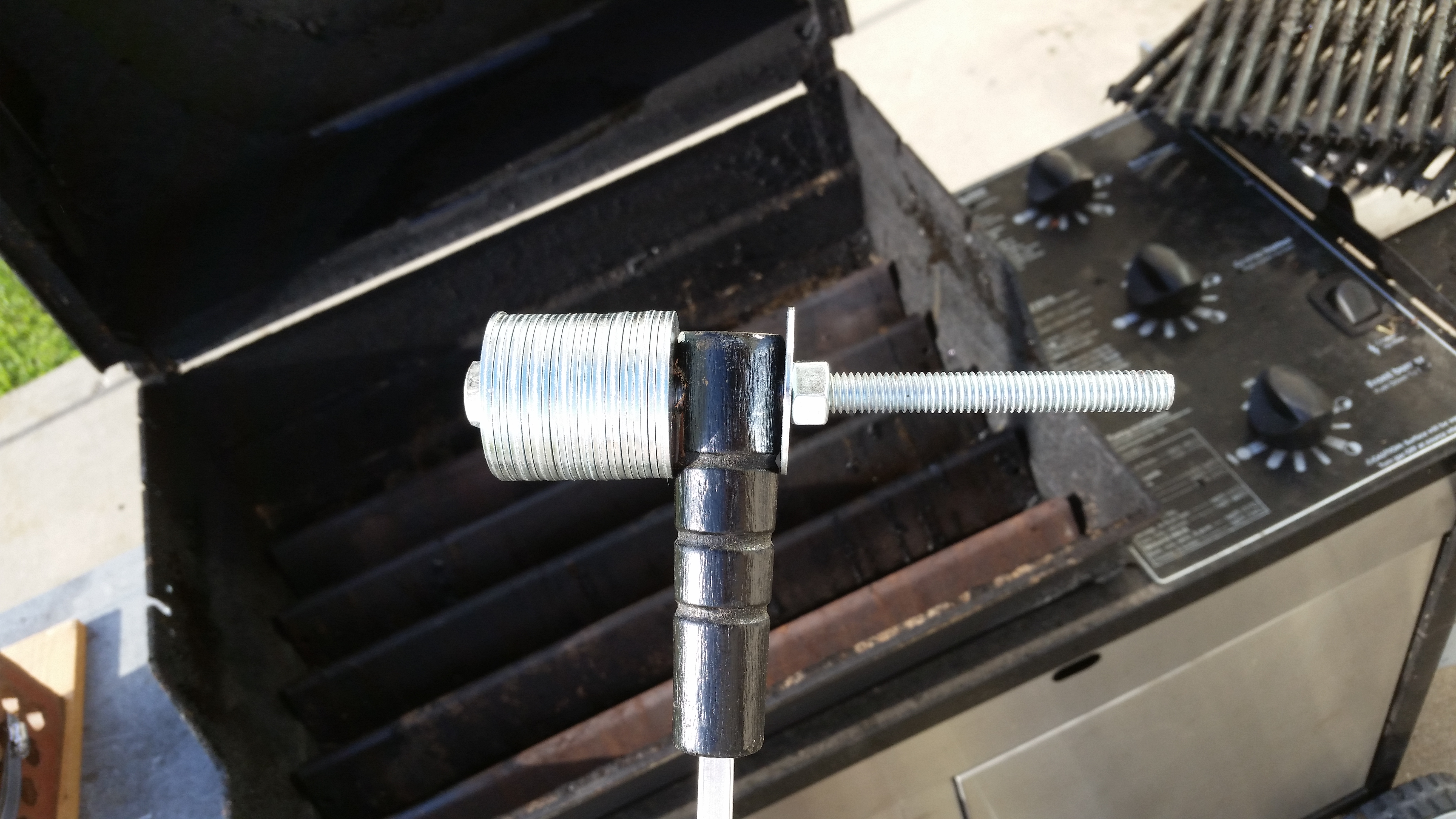 Since I'm going to put this motor on the other side of the grill and this area doesn't sit on the same level as the other and this motor is totally different from the original, I had to totally rework my mounting system. Starting with a piece of 3/8th's thick particle board, which would bring everything up to the correct height, I cut some grooves into it so I could stick some of the washers in there. This acts as a stop so the brick and motor can't walk backwards and eventually off the spit. 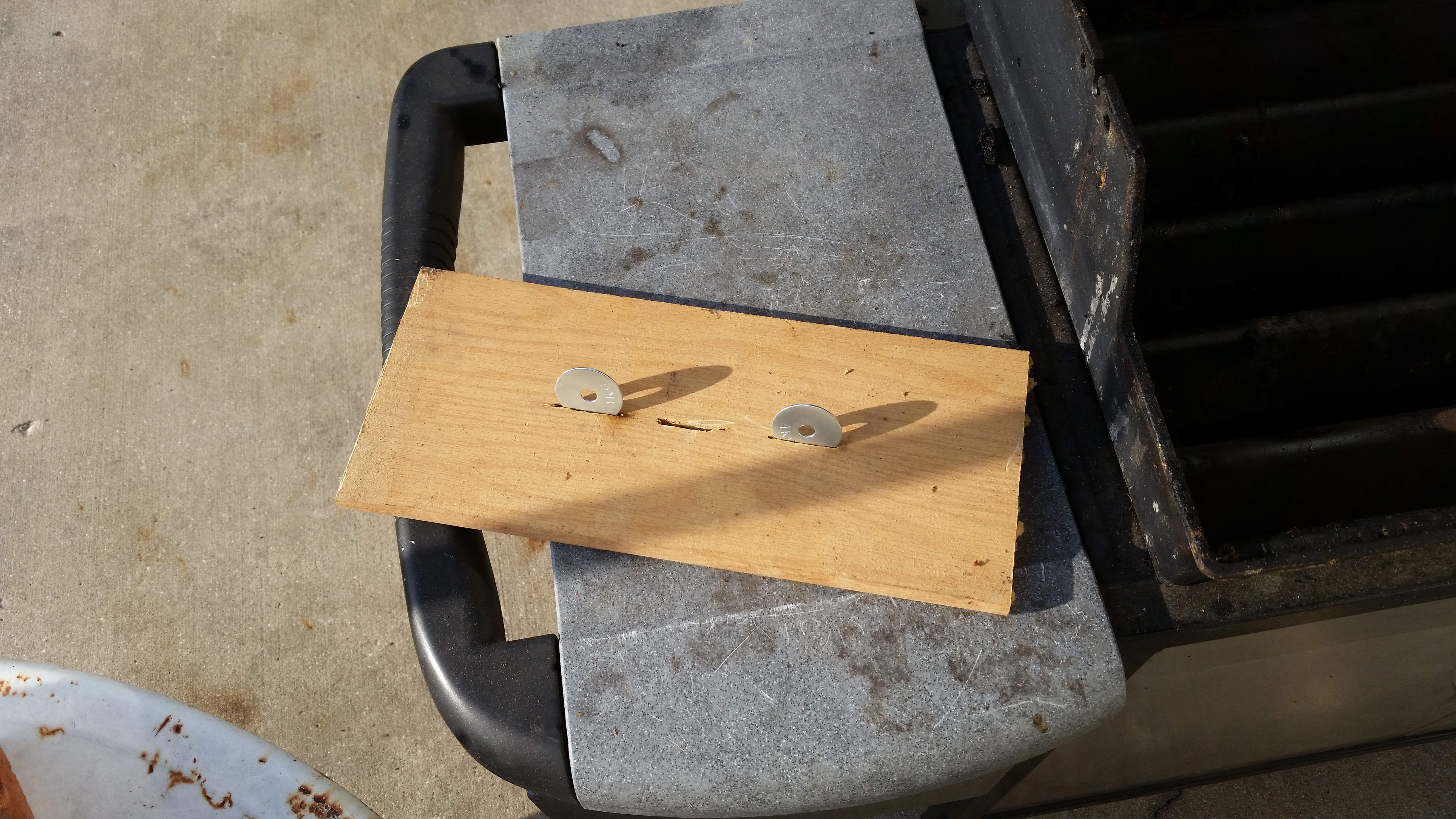 The new motor is bigger than the old one, so I'm just using one brick now. This design allows me some wiggle room to adjust it up or down as needed, I also took some old dremel buffing wheels and stuffed them between the motor and brick to help dampen any vibrations. And don't let the duck tape fool you, I just put in on there to keep the hard stone or the hose clamps from scratching things up. 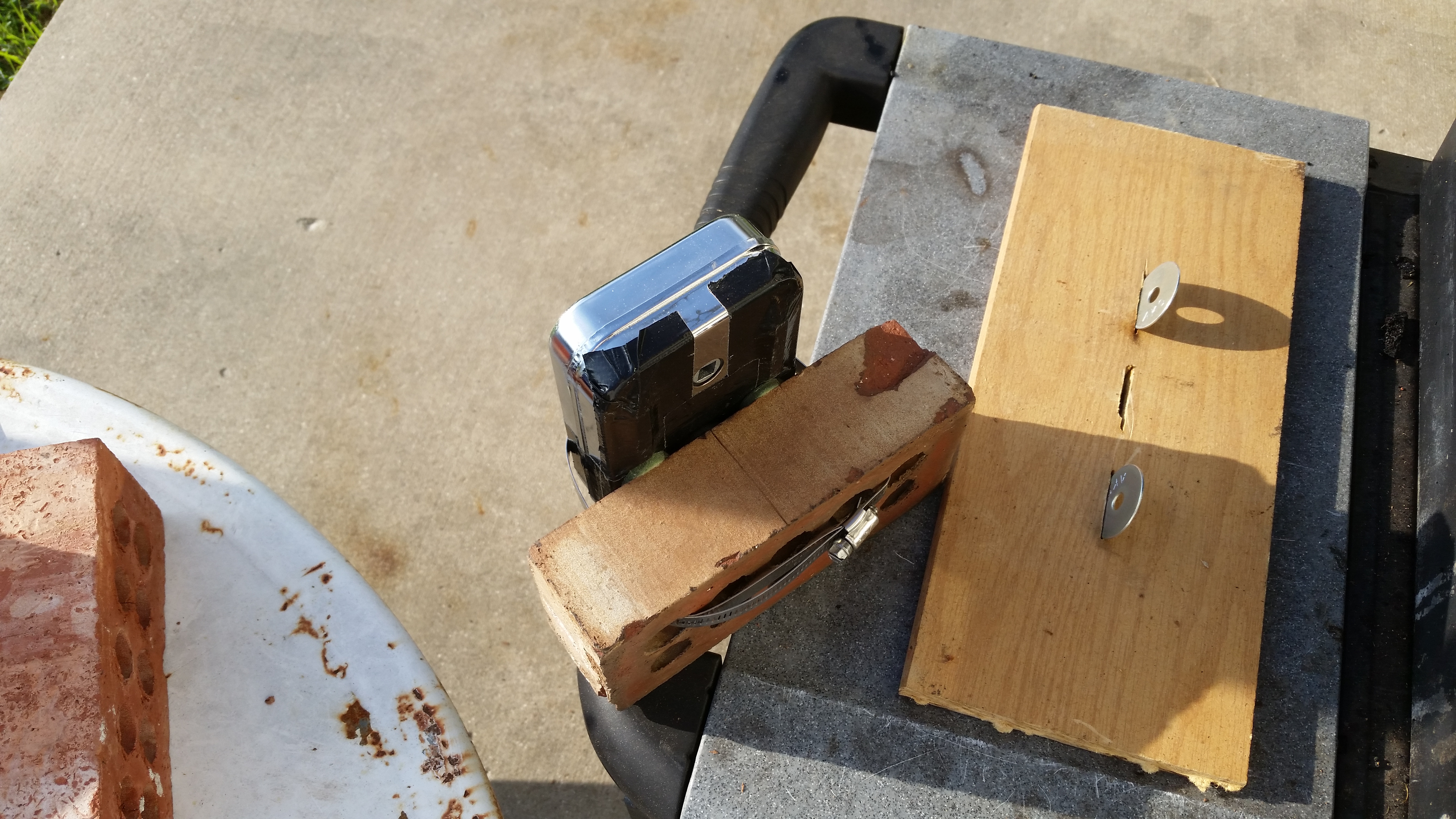 The second brick just butts up against the board to prevent the board itself from being pushed back. 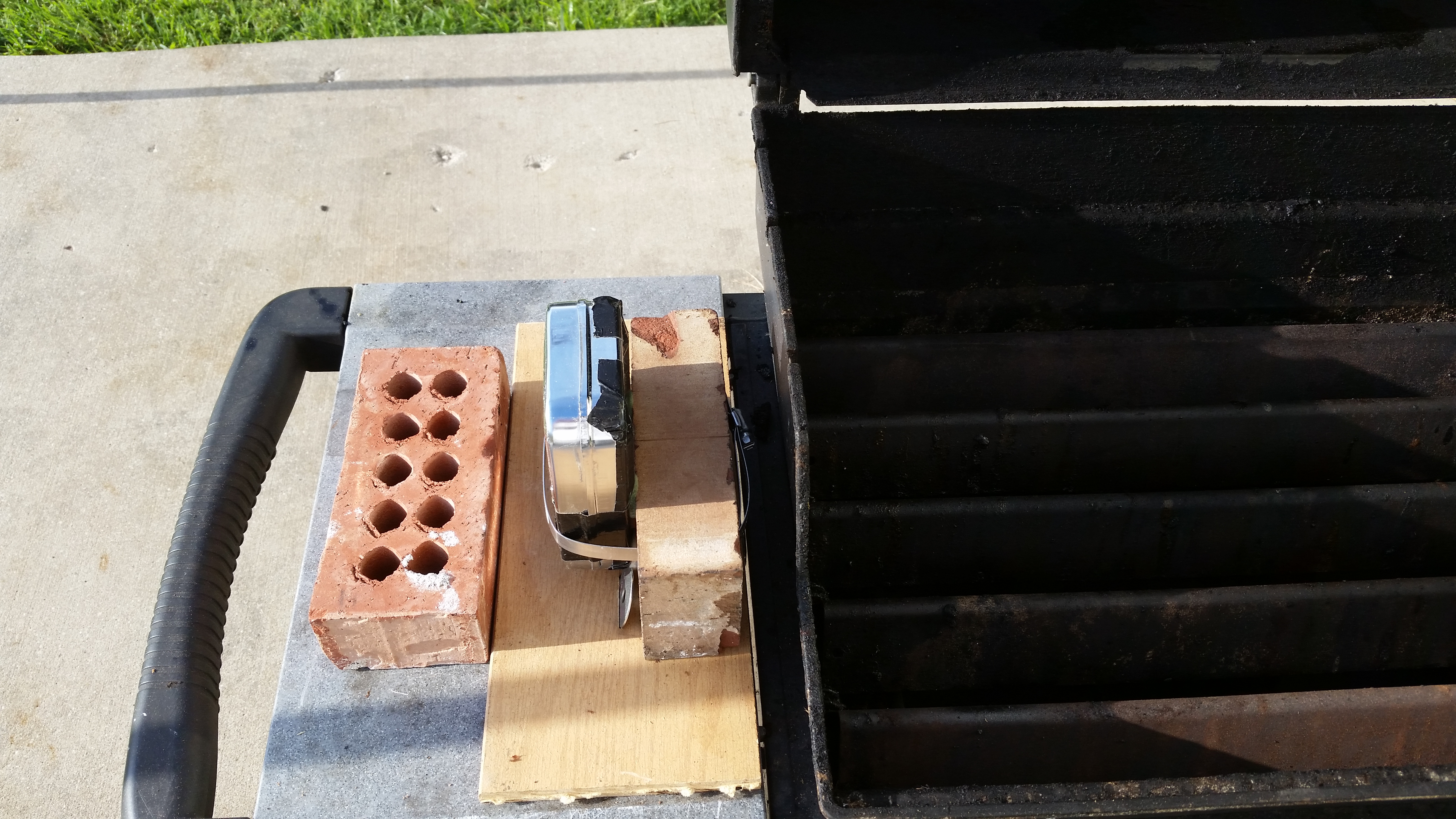 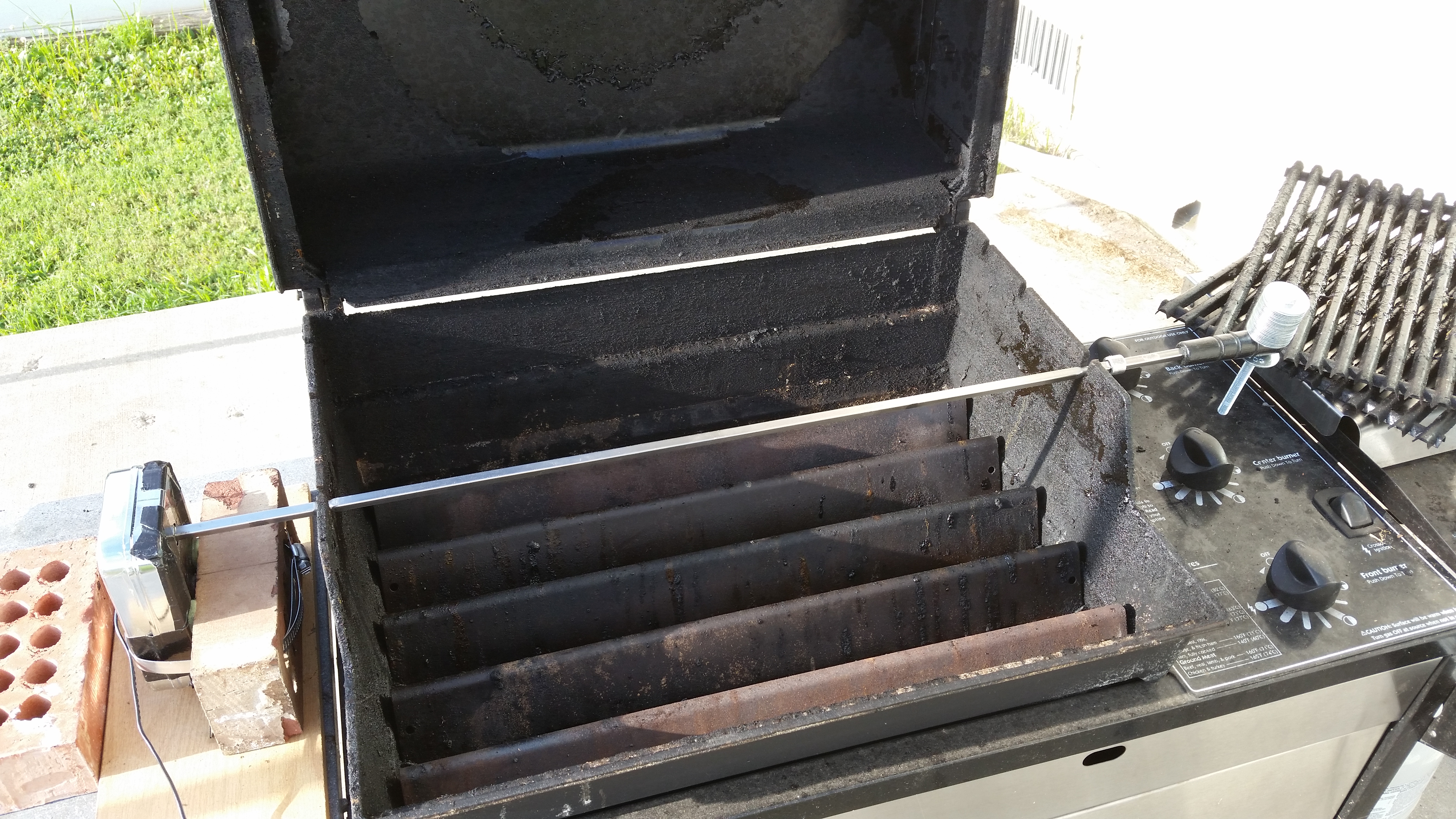 Red Green ain't got shit on me.
The Mighty Buick Of Destruction.

We're up to 8.0 now and better than ever. Mostly minor revisions such as smoothing out any remaining flat spots on the shaft, but I have added a second set of forks to the spit. Before I was getting by with just the original two forks which allowed the ass ends of the birds to flop about as it spun, no matter how I tried to secure them they just kept causing trouble. So these new ones have four prongs on them and they're being used along with the originals to keep everything nice and tight. This has allowed me to really dial in my counterweight system, and now it's spinning smooth as glass, the motor doesn't even strain on the upswing. 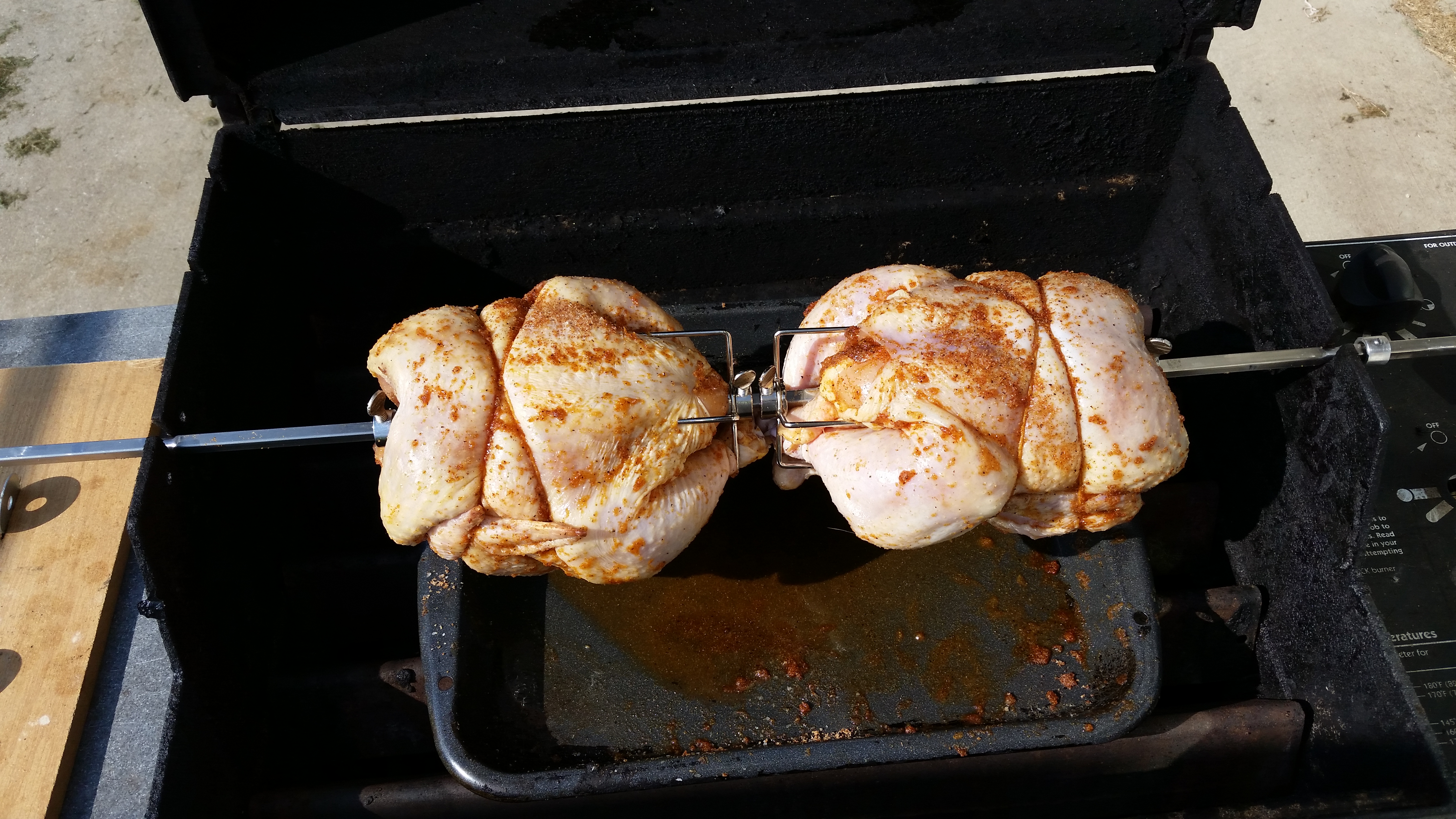 I think it is time for a new headset. I just broke this one, and used the rubber band from the takeout container I saved just for such an occurrence to fix it. 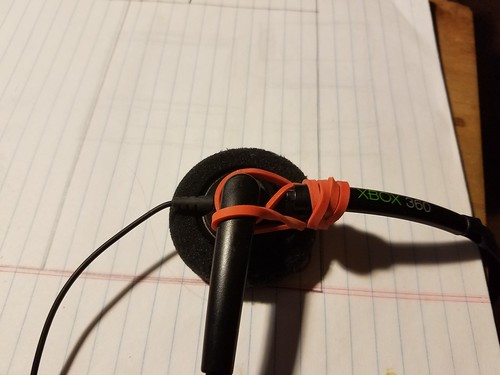 Broken headset quick repair by StevenBudRK, on Flickr
"I wish for an America that matches the marketing materials.” - @HardcoreHistory

This one is not mine, but during a visit to my parent's place this weekend I found something I think is worthy of unearthing this thread from it's not so shallow grave.

Imagine that you have a stereo in your workshop and that you're using an old iPod as a the music source. That thing will eventually run out of juice, so it would be practical to have a charge brick permanently available there just for convenience. But you already use all of the other charge bricks you have in the house, except one, which has a US plug, but you need an EU plug. What do you do?