Anybody know how many episodes of James May's The Reassembler are planned? I found the first three to be really, really enjoyable. Never would I thought I love watching a bloke putting stuff together in a shed.

Mitchi said:
Anybody know how many episodes of James May's The Reassembler are planned? I found the first three to be really, really enjoyable. Never would I thought I love watching a bloke putting stuff together in a shed.
Click to expand...

Those 3 were it for the time being.

TopGearNorthAmerica said:
And the fact that the executive who gave JC the most grief is gone (bye-bye Mr. Cohen) means the door for a return is wider.
Click to expand...

And good riddance to him!

2. The Reassembler show has got to be the most cost-effective production that BBC4 can do ....
3. Prediction: BBC4 *will* probably order a second series.
Click to expand...

They would be very silly not to, especially with such low overheads - even lower than Man Lab, surely - and I'm certain JM would be happy to be paid to fiddle about in a shed while being served the occasional cuppa

The tea's probably more expensive than the camera operators, it's quite amateur-ish. :lol:

Mzrts12 said:
The tea's probably more expensive than the camera operators, it's quite amateur-ish. :lol:
Click to expand...

You do realize that this is part of the setting, something which they purposely created? People are fed up with all the fake silliness and crave for something "real", including the crew into it all breaks the 4th wall to a point where it becomes "really real". It's endearing and that was the whole point, on purpose.

Exactly. They are deconstructing the television making process which is in keeping with the premise of the show.

James has made two of the best progs in recent times - the U2 trip - bloody marvellous (Compare it to Mythbusters version). And he made the beer one with Oz, especially the first one was brilliant. A Born communicator.

James May reassembles once again on BBC Four 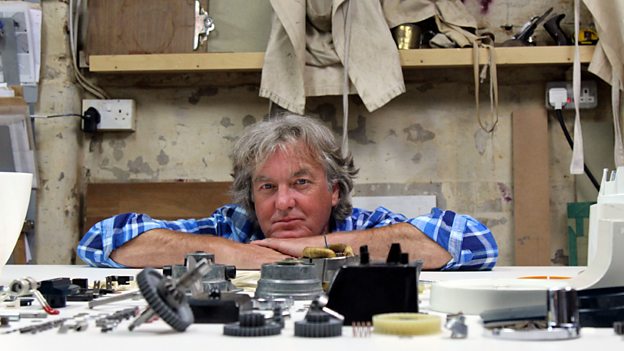 BBC Four today announces a Christmas treat for fans of screwdrivers and rubbish shirts, as James May returns to the channel to give a welcome relief from unwanted gifts and stuffing-induced comas with four more programmes in his series James May: The Reassembler, once again slowly building everyday items from their component parts, and discovering what it takes to actually get them to work.

In each episode, he will focus on one object and carefully put it back together, screwing every screw, tightening every bolt and vigilantly rebuilding the object to its complete form.

James says: ?Here we go then. More workshop cock-ups and cod philosophy. To be honest, I?d probably be doing this even if no-one was filming it. There?s a lot of false jeopardy in TV, but this is absolutely real; I really do stand there for hours putting things back together. The great thing about reassembling bits of the past is that you?re reminded of how terrible it all was. These are warnings from history - ignore them at your peril. It took me all bloody day to get that old record player back together. I celebrated by going out and buying a new tablet, with a massive memory.?

Cassian Harrison, Channel Editor, BBC Four, says: ?BBC Four has long celebrated passion and expertise and I?m absolutely delighted that James May is coming back to the channel to get to grips with four more engineering marvels from our past. As we discovered last time, if you want to understand what something is, then you have to understand how it works and what makes it work ? and James is the man to slowly find out.?

In episode one, James will be reassembling the Christmas present we all dreamed of being left under the tree by Santa on Christmas morning: the Hornby toy train and track. In his workshop he will be faced with the object laid out in all its individual parts, and he will have to work out how exactly how the thing will be pieced back together. And if that wasn't challenging enough, he then has the nervous climax where he discovers if it actually works.

James will reminisce about his childhood Christmases and the joy of his Flying Scotsman Hornby Train set.

Across the series, with every object laid out in front of him, James will revel in the challenge, enjoying every second, giving his memories of the object, his love for it and bringing his usual Jamesesque musings. He will give a potted history on every item he is rebuilding - who invented it, how it came about, why these objects are so important. As well as learning the history of the object, we will get a history of the component parts.

The remaining three episodes feature a 1960's Kenwood Chef food mixer; a Dansette (a portable record player with integrated speakers from the 1950s/60s) and a 1976 Honda Z50a mini trail motorbike, known affectionately as the Monkey Bike.

James May: The Reassembler, 4x60?, was commissioned by Cassian Harrison, Channel Editor, BBC Four, and Tom McDonald, Head of Commissioning, Natural History and Specialist Factual Formats. The Commissioning Editor is Lucinda Axelsson, and the Executive Producer is Will Daws for Plum Pictures.

The first series of James May: The Reassembler reached an average audience of more than one million viewers per episode.

In short, 4 60 minute episodes(previous ones were 30 minute) and no air date. The first episodes aired 2 weeks after the press release though.

1. Thank heavens he's shaved.
2. Betcha it's the Bike that gets the ratings.
3. If he's smart he'll ring up Oz Clarke during the Hornby reassembly.
4. I'm expecting Clarkson jokes during the food mixer one ("we will *not* hook up a V8 engine for power")

Great news. If anyone can make that work for an hour it's May. I found the first shows incredibly relaxing. It was like doing yoga without the Lycra and the torn tendons.

Looking forward to this!

Great news! Been too long a wait - a scattering of TGT promo video clips with James' mutterings wasn't enough to fill the void.

I am glad they will be longer.

Where does it say that the new episodes will be an hour each?
Last edited: Dec 11, 2016

I guess they changed from 60 minutes to 30 minutes, maybe just for this episode?

James May: The Reassembler, Series 2 Episode 1 of 4

Much like Santa Claus, James May has spent the year in his workshop getting ready for Christmas, in a festive special in which he reassembles his favourite childhood Christmas present.

But this isn't just any Christmas present, this is the one that changed his life and sent him on to a path of mechanical intrigue and reassembly. This is the Hornby Flying Scotsman with realistic chuffing sounds which James ripped open on Christmas Day 1972.

Laid out in all its 138 tiny component parts, James lovingly reassembles the train as well as his memories of Christmases and toys past.
From the exhilarating re-magnetising of the motor's magnets to some thrilling wheel-quartering amidst a backdrop of James's continued bafflement of electricity, we watch as James rebuilds the entire train set and hopes at the end his Christmas wish will come true and the train will start up and realistically chuff into the night.
Click to expand...

Clip from S2 EP1:
http://www.bbc.co.uk/programmes/p04ksrvv
The Remagnetiser
Whilst reassembling his childhood toy train set, James has a rather exciting remagnetising tool to show us.

I wonder if the remagnetising tool is like the degaussing tool Big Clive looked at that can also remagnetise things, or make them fly across the room.

Anyway I'd like to see him assemble one of these:

If I remember correctly all the stickers inside had to be applied by hand. :lol: