Ownership Verified: Keep it in the Family -- 1995 Jaguar XJR

Der Stig said:
Motor mounts and trunk struts came in though, so I may try to get some of those done this weekend.
Click to expand...

I thought I included trunk struts in that box of parts I left in the trunk.

Also in the trunk, presumably.

Well considering he already had to order more, I'd assume he already used and/or took care of the ones in the trunk...

Labcoatguy said:
I thought I included trunk struts in that box of parts I left in the trunk.
Click to expand...

D'oh! You definitely did. I'll be set for a while then :lol:

gaasc said:
Also in the trunk, presumably.
Click to expand...

thomas said:
Well considering he already had to order more, I'd assume he already used and/or took care of the ones in the trunk...
Click to expand...

I know I should have done something when the knocking sound stopped...

Finally got the right FPR today and promptly installed it. Still surging sadly, albeit not quite as badly. And the fuel smell in the interior is gone.

Next victim is the coolant temperature sensor since LCG had the fuel pumps and filters done a couple years back. CPS is also a possible contender and I have a spare. Also replaced one of the trunk struts, it holds up much better now. Haven't faffed with the other yet as it's encased in wiring loom.

Here's the old "Lucas" part. The bracket is attached by a 22mm nut with a washer and holy shit is it on there good. Visegrips tore the old one up pretty good, but I finally got it off 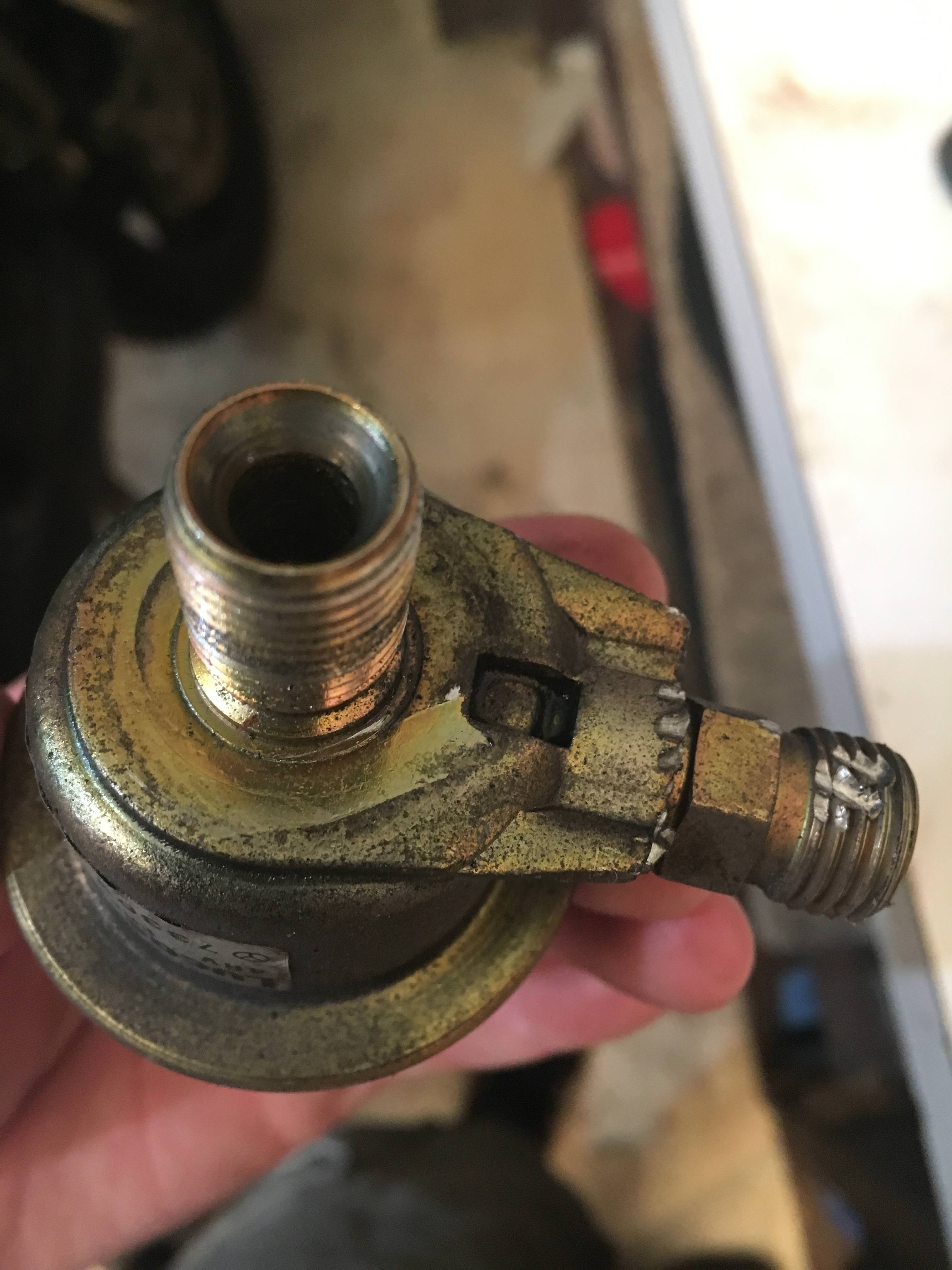 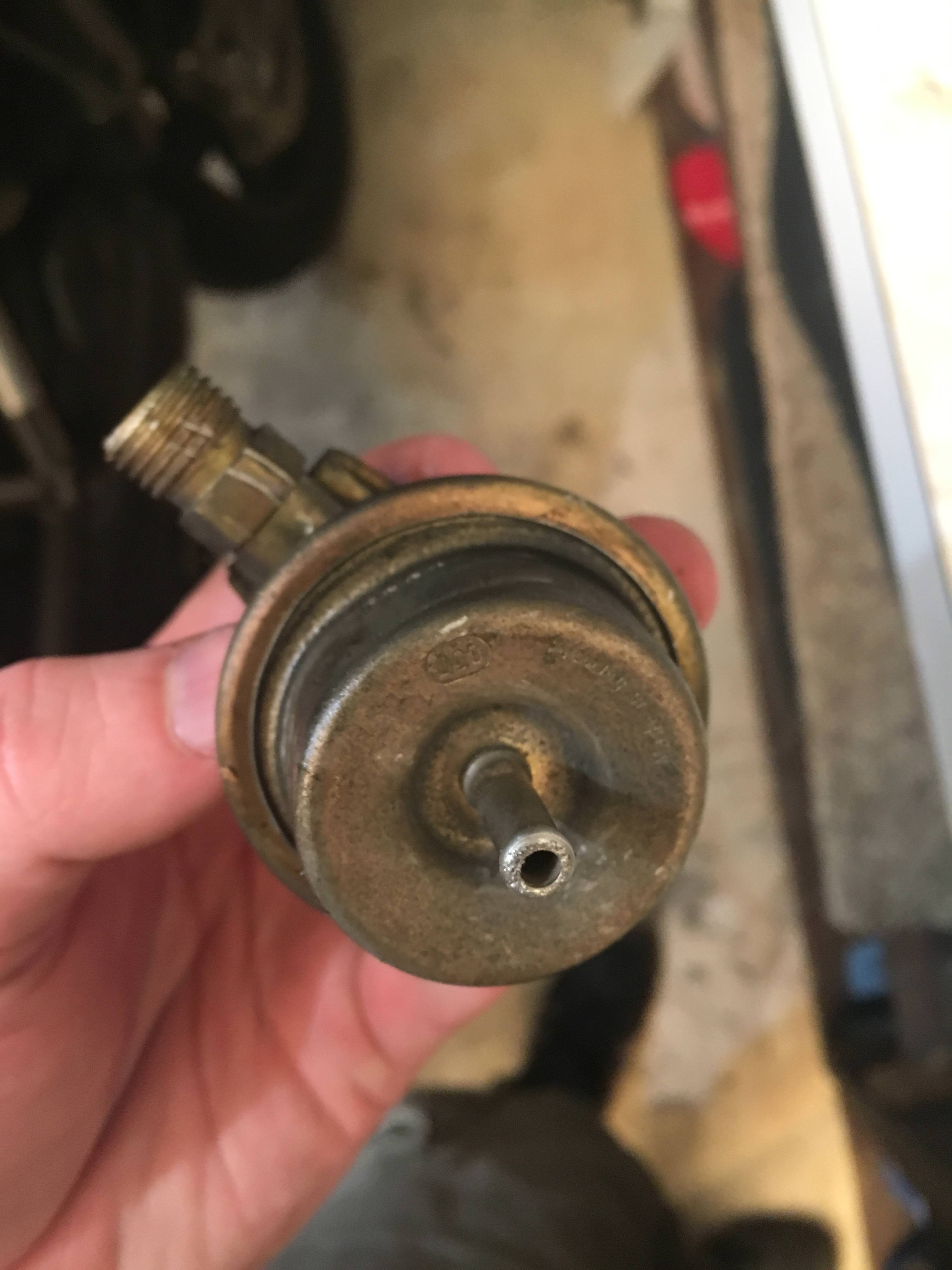 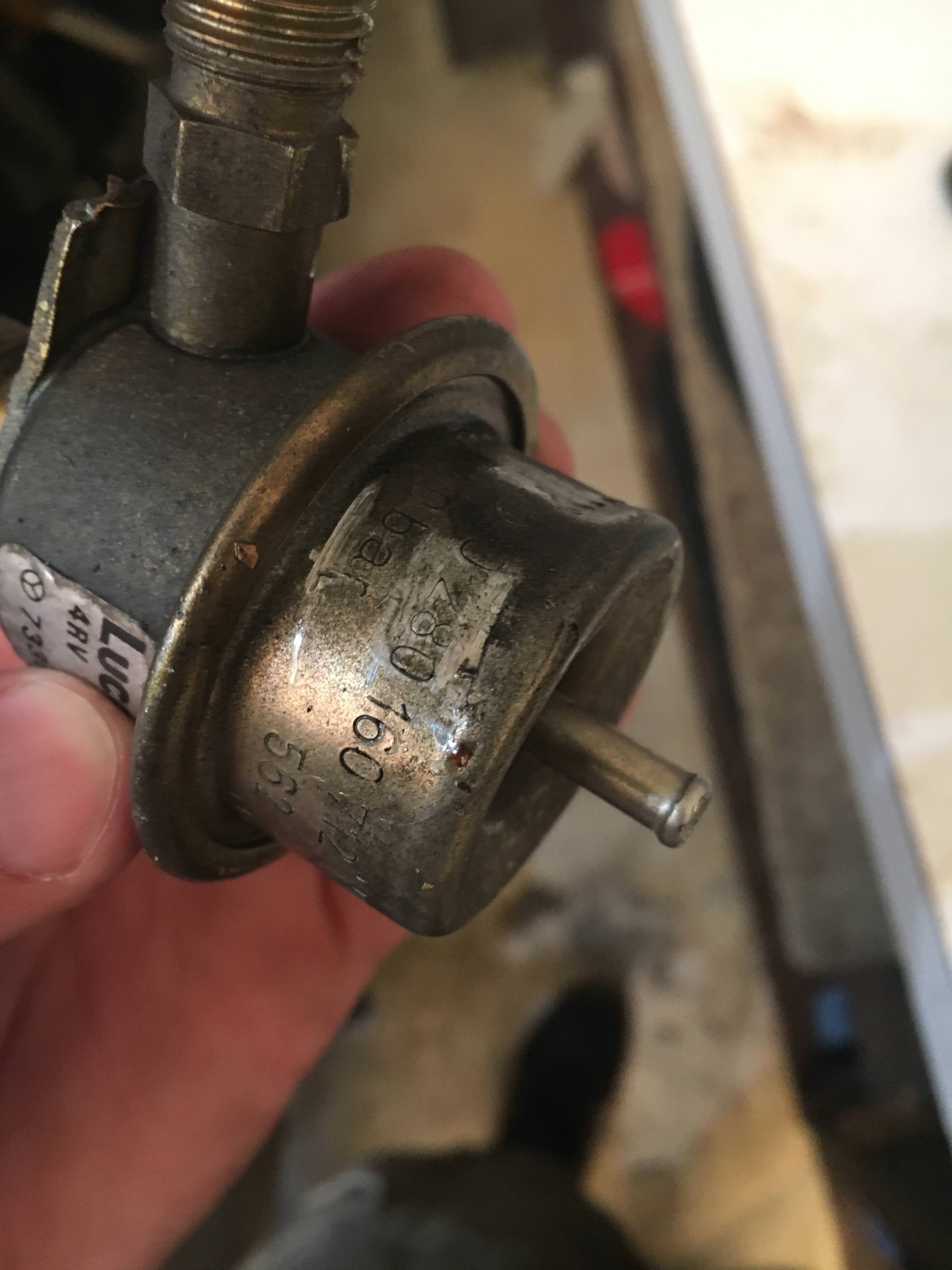 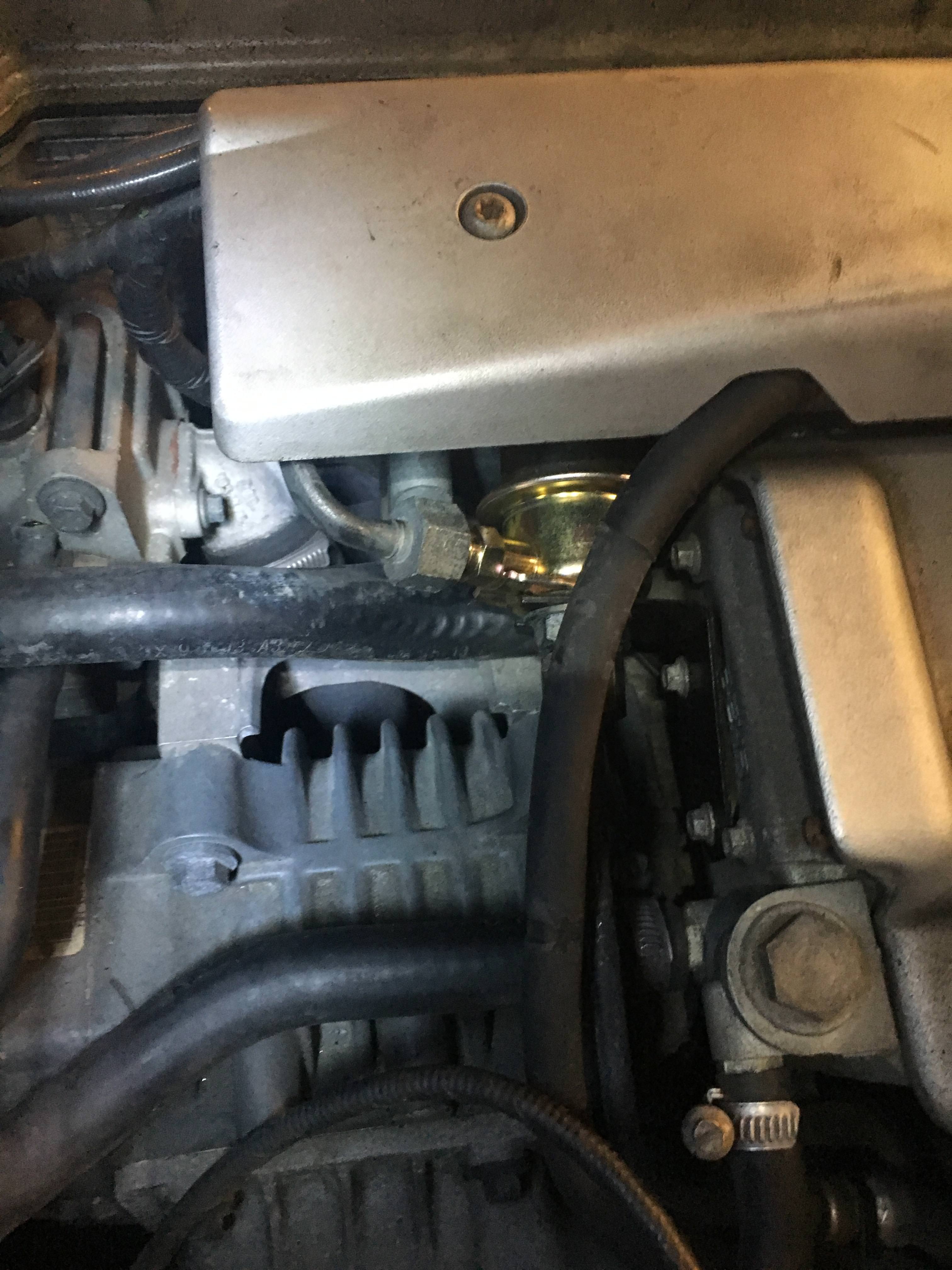 SITREP! LCG shipped off an OEM exhaust (thanks again) so I can be legal. Just waiting for it to be less freezing. And for the Jag to come back to life.

The FPR did not fix things, but replacing the engine coolant temperature sensor (ECTS) helped and swapping the MAF out with one that LCG kindly provided did the trick!

Until last week. Thought the battery was dead (and it was on it's way out) as the car was cranking, but not turning over. Replaced the battery on Friday, but still no joy. Spectre and I went over the various fuses and relays, but they all looked fine. We're thinking it's either the CKPS (crankshaft position sensor) or CPS (camshaft position sensor). Haven't dug in yet to start replacing stuff, but will once it gets a bit warmer in the garage.

Hmm, I replaced the crankshaft position sensor with a new aftermarket replacement when I first got the car, so try the camshaft sensor first.

I sourced a fuel pressure regulator for an old Range Rover once. The old one had “Lucas W. Germany” stamped on it. The new one was identical but had “Bosch Germany” on it.

Labcoatguy;n3543387 said:
Hmm, I replaced the crankshaft position sensor with a new aftermarket replacement when I first got the car, so try the camshaft sensor first.
Click to expand...

Any idea which aftermarket company? Some are worse than others.

Spectre;n3543401 said:
Any idea which aftermarket company? Some are worse than others.
Click to expand...

Also on that note when I had to replace crank sensor on the Z I was advised by my mechanic to do that and both the crank ones just to keep it consistent.
Last edited: Jan 1, 2018

Perc;n3543400 said:
I sourced a fuel pressure regulator for an old Range Rover once. The old one had “Lucas W. Germany” stamped on it. The new one was identical but had “Bosch Germany” on it.
Click to expand...

That was due to Bosch not having enough capacity to keep up with the demand for their Jetronic system parts for OEMs back in the 70s. The only European company they could find that had the production capacity they needed sitting around idle was Lucas. Bosch licensed all their Jetronic stuff to Lucas in exchange for production and Bosch employees were responsible for QC of Jetronic parts. The parts were statistically no worse than Bosch-made items and often had German components - perfectly fine.

The story of that gets a little weirder still. During the 80s and 90s sometimes Ford needed injectors with flow sizes they didn't already make themselves - so they went to Bosch and asked for some off-the-shelf injectors. Bosch didn't have the capacity to make them themselves, but the history books say either Bosch handed the order off to Lucas or referred Ford to Lucas - which lead to the odd situation of an American pony car using a locally evolved version of a German fuel injection system developed from an American patent using British fuel injectors.

Spectre;n3543401 said:
Any idea which aftermarket company? Some are worse than others.
Click to expand...

SMP is local, if there's a problem with it I'll go express my displeasure to them in person.

Camshaft position sensor has been ordered from SNG Barratt, oddly they had it the cheapest, and by quite a large margin. My order has been "accepted," so just waiting for it to ship.
Last edited: Jan 6, 2018

Der Stig;n3543731 said:
Camshaft position sensor has been ordered from SNG Barratt, oddly they had it the cheapest, and by quite a large margin. My order has been "accepted," so just waiting for it to ship.
Click to expand...

Long time overdue update, but the camshaft position sensor turned out to be for a V12 car and I waited some weeks for it to show up. And replacing it ended up being a moot point anyway. Spectre and I snagged one off a crashed XJR in one of the local yards to be safe though.

Over the past couple months, we've tried diagnosing various issues and ended up replacing all the spark plugs. Still no joy, if it turned over it ran very poorly. I finally gave up and had it towed by AAA to Overseas Service Haus per conversations with Spectre, they're one of the competent older Jag/Euro shops in the area. I dropped her off last Thursday and all the work was done Tuesday, CrazyJeeper was kind enough to retrieve the XJR from their lot.

Roy, the service manager was excellent. They figured it out by running a smoke machine (the intake tube between the blower and throttle body was torn letting in tons of unmetered air). I also had them tackle the motor mounts since I'd resorted to swearing in Spanish attempting to do them on my own. Both jobs were reportedly huge pains in the ass, which makes me feel better at being stymied!

Changed the oil at 192k miles and have been driving around a bit. An alignment is needed and refreshing the brakes are on my to do list for next month. 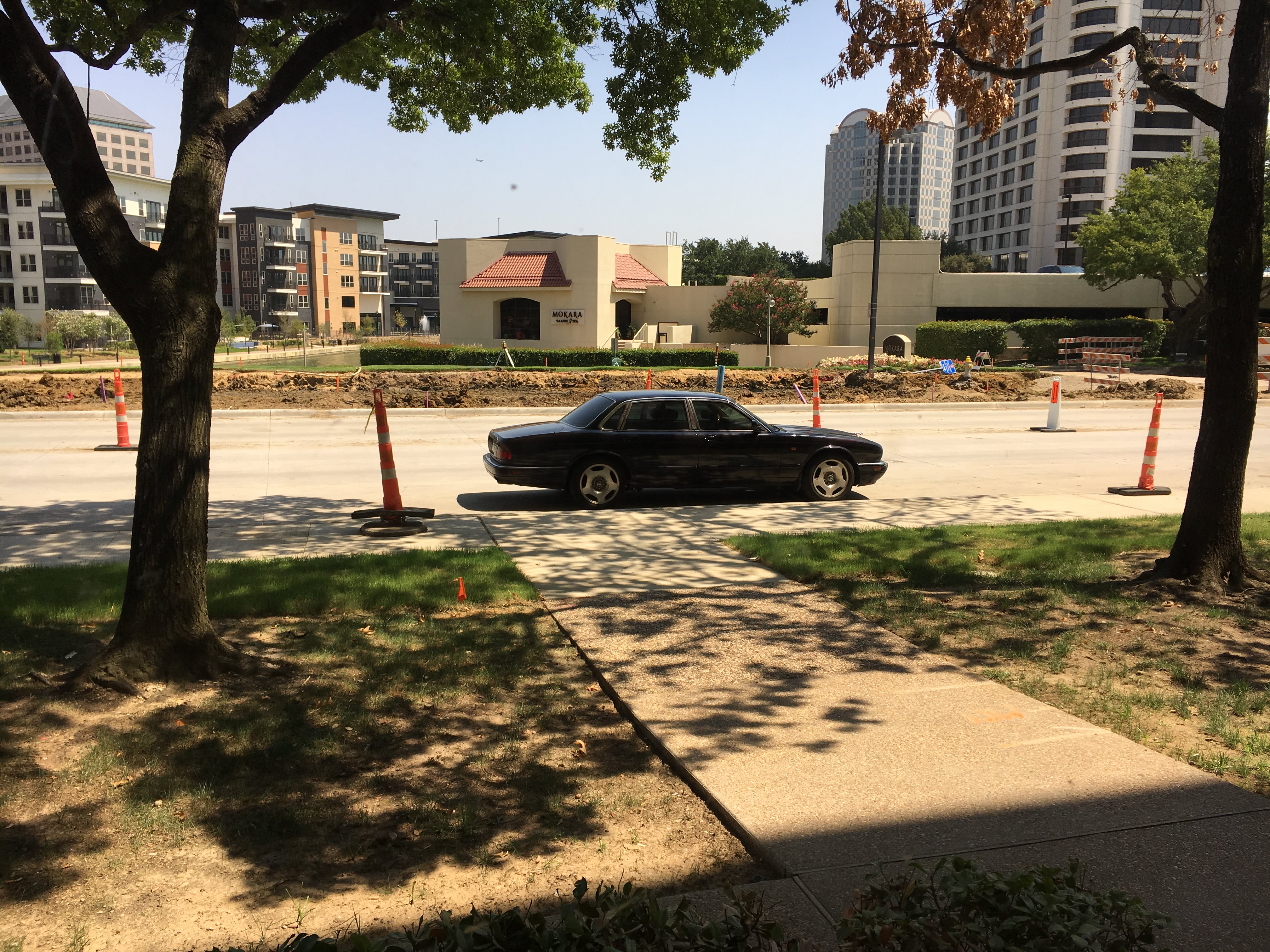 But of course, that sound of pulley squealing had to go silent. So, I get to post another pic of the car on a flatbed! 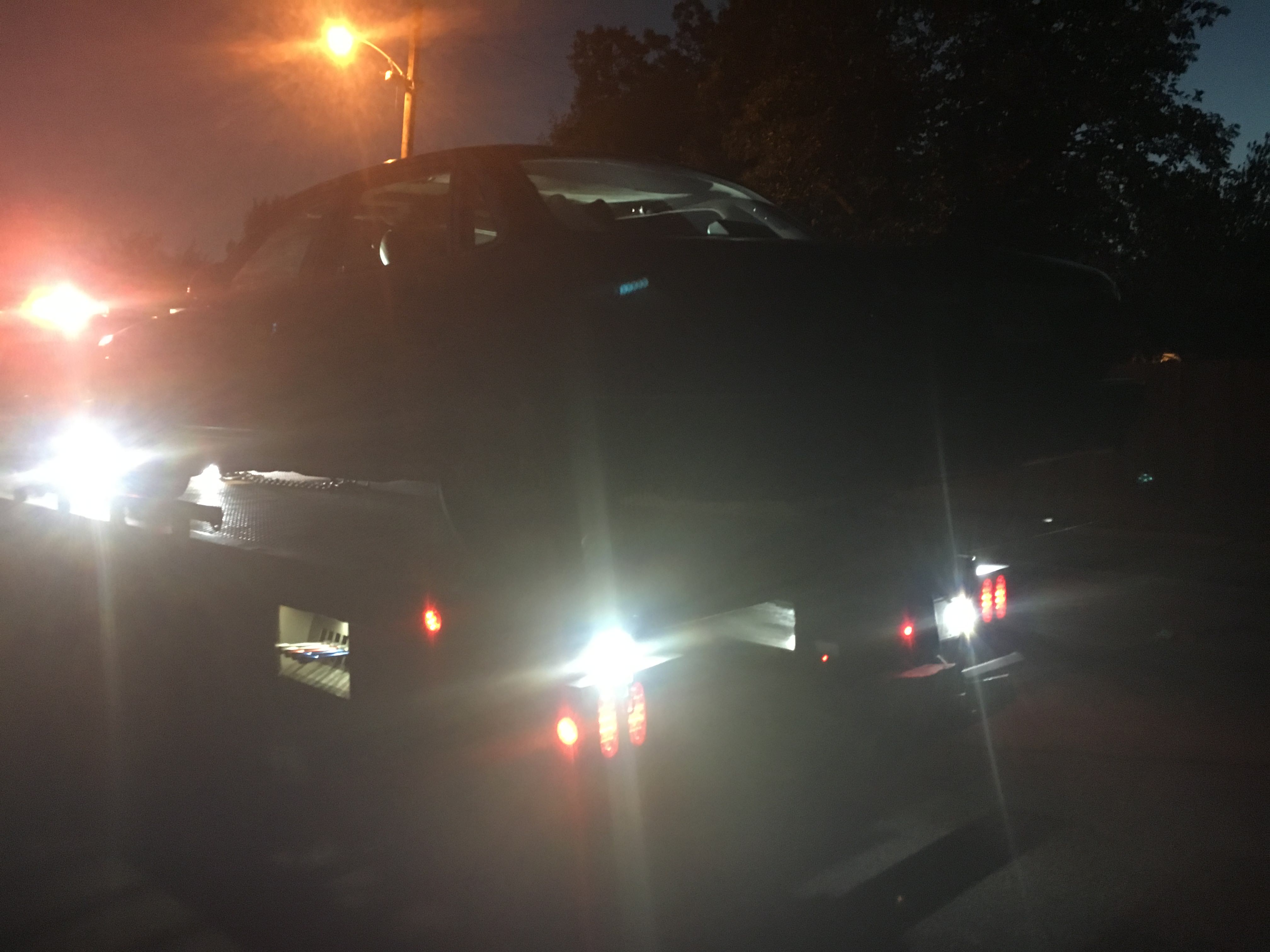 I heard a couple loud pops over the weekend...first pop had the AC go out as I was parking outside a restaurant, no lights went on, so I shrugged it off. Second pop was even louder and occurred while taking off rather exuberantly from a stop light. And suddenly no more supercharger sounds or boost. Again no lights went off, temp stayed put, so I drove home. 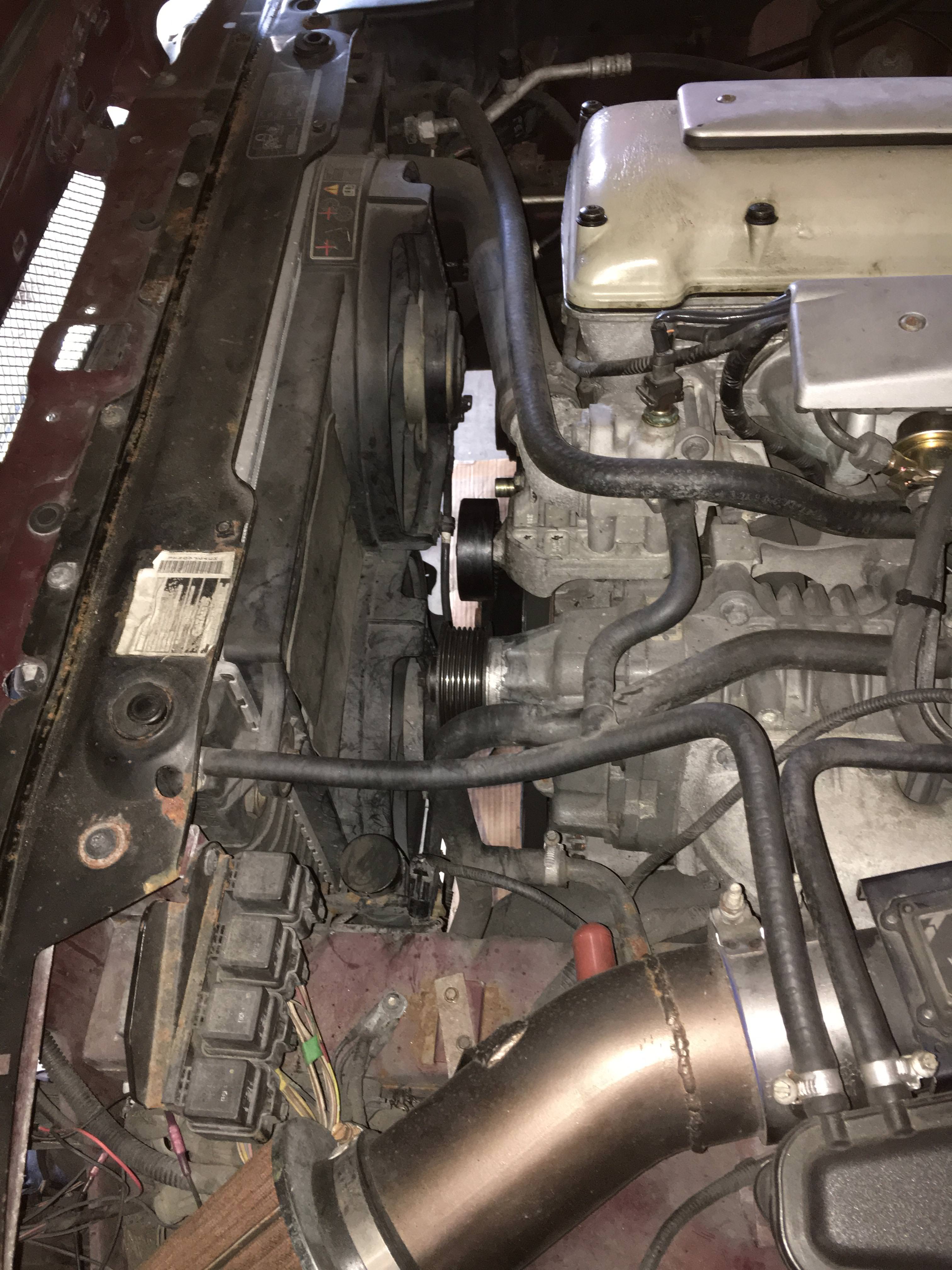 So to replace the belt tensioner, I bought another car :lol: 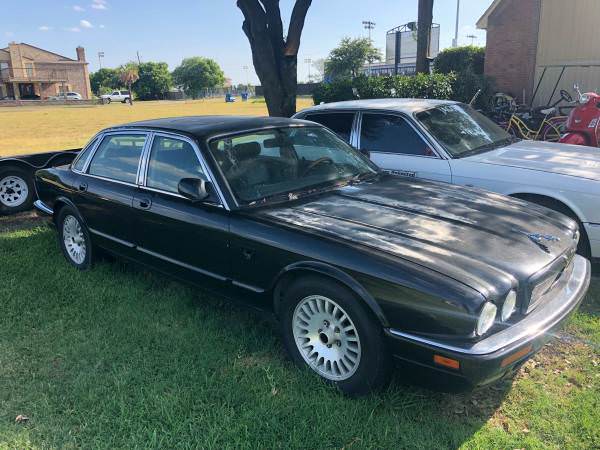 It's a 1997 XJR with a very fresh (45k miles) motor, nice bumpers, a nearly mint and complete interior (including XJR100 front seats and door sills), all working stereo components, but the trans has an electrical problem. It'll be a parts car that I'll be keeping up at my mechanic's shop.