Lamborghini has released pictures of a new concept car revisiting the Espada (1968-78): a front-engined 2+2 GT which could compete against the likes of the Aston DB9 and Maserati 5000GT. It could be fitted with either the Gallardo's 5.0-litre V10 or the Murcielago's 6.2 V12, and could go into production late 2007: it is said to be entirely production-feasible, and not too far off getting the go-ahead as Audi seeks to widen the Lamborghini product range and achieve Ferrari-rivalling sales volumes.

Built on a version of the next-generation VW Group 'D4' platform - to be used for the next-generation Audi A8, Volkswagen Phaeton and related models, Bentley Arnage and even a rumoured 'entry-level' Bugatti (less powerful than the Veyron) - the new Espada will have a practical hatchback-type boot and could also have RX-8-style 'suicide' doors for easier access to the rear seats. However, although it is referred to internally as the 'Espada', it is likely to take a new name if - when - it goes into production. Sources suggest 'Lagartijo", after a famous matador.

This concept car could make its debut at the Frankfurt Motor Show next month, though Lamborghini may not wish it to detract attention from the launch of the Gallardo Spyder and Roadster (the latter the production version of the no-compromises Concept S seen in Geneva) and special edition Gallardo Piton coupe models. The facelifted Murcielago will probably not, however, be seen until next year, when four-wheel drive versions with the uprated 6.5 V12 will be revealed, and perhaps even the long-rumoured diesel models with the VW TDI V10. Lamborghini is also said to be working on a modern-day LM 002 off-roader, and prototypes have been built of 'LM 00X' high-spec Reef Runner, Road Runner and Race Runner derivatives featuring a pair of scissor-opening doors. There are also reports that the so-called 'baby Lambo' project is well underway, with a coupe using an Audi V8 scheduled for launch in 2008.

surprisingly... I kinda like cars like that, it has a very unique style
OpticsCentral - Australia's Optics Superstore for Telescopes

I like the styling too, except that it should be a bit more edgier to fit the design theme currently at Lamborghini. Those corners are just to soft.

"The best way to get a law repealed is to enforce it strictly." - Abe Lincoln
Ignition Online Magazine

Lambo will be so common if they release that.
www.autoheadline.blogspot.com

Rturbo said:
Lambo will be so common if they release that.
Click to expand...

Lambo in my mind is a rarely seen car, less then Ferraris. If they make this, then that will change.

if they make this, they will still be ok, but if they release the 4x4, then they will be common, and that would be a travesty and tragedy.
porsche is no longer a sporty brand to me after the cayenne, just the boxster and 911 series are actually sporty, the name porsche isnt anything special to me now

looks kinda cool, but don't see the point of lamborghini releasing it, but

not too far off getting the go-ahead as Audi seeks to widen the Lamborghini product range and achieve Ferrari-rivalling sales volumes.
Click to expand...

realy frightens me. who wants that? it'll become just another fashion article like a ferrari. it's lambos strength they only have those models, and only few are available 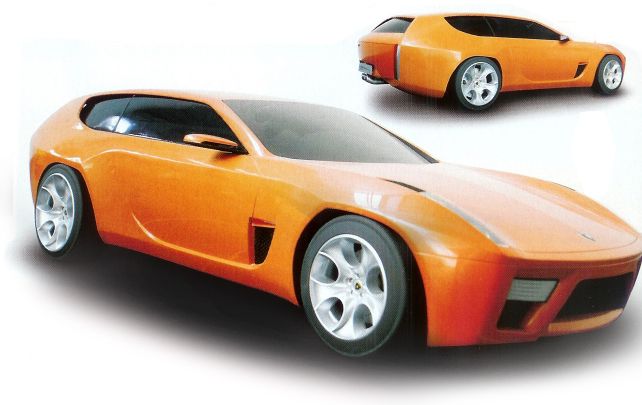 that's a pretty good chop of the above picture.

wot za feck! thats not stylish.. at all! thats garbage. i hope the end result will look different from this.

^Thats much better but its still weird as

looks like it's gonna be another tongue-twister for Jeremy too, "Lagartijo" - hmmm...

Um... afaik these are either student projects sponsored by Lambo or autoweek style photoshops... Lamborghini just finished a student project at some Italian college:
http://www.cardesignnews.com/news/2005/050812scuolapolytechnica/index.html
*have one of my south-african peace crisps!*

i sure as hell hope so, those strike me as weird concept cars, not cool ones.

dutch_designer said:
Um... afaik these are either student projects sponsored by Lambo or autoweek style photoshops... Lamborghini just finished a student project at some Italian college:
http://www.cardesignnews.com/news/2005/050812scuolapolytechnica/index.html
Click to expand...

those students suck, i hope they fail

I sure hope this Espada wasn't designed by the Belgian Luc Donkerwolke, who designed the Gallardo and the Murcielago, or I'll have to leave my country