93Flareside said:
Cooler than it actually is.
Click to expand...

I am currently watching Wargames (1983) and feel the same way.

93Flareside said:
Don’t freak out but, I just saw The Matrix for the first time. Good, would watch again.
Click to expand...

Be glad they didn't make any sequels.

Junior and I went to see it yesterday. Holy shit that's a good movie, and one that does more than any other I've seen to depict just a fraction of the true horror of that godawful conflict.

DanRoM said:
Be glad they didn't make any sequels.
Click to expand...

...and they will never make one.

First time I glanced on my watch was 1h30m in. - Way too long, bored the pants off me. 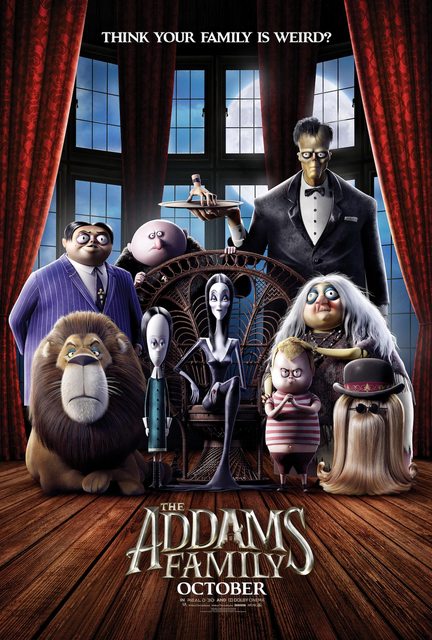 Currently playing on Delta seatback IFE and seeing as I absolutely love the 1991 and 1993 films, I decided to watch it on my flight to Boston last night. It was ok. Some things fell flat for me, like the art style (too childish) and the some of the acting, namely Fester Addams, but the base storyline was pretty good. They did a fantastic job of making Gomez a fitting tribute to both John Astin's and Raul Julia's interpretations of the character and the character design was pretty true to Charles Addams's original cartoons. There were also some great nods to the original TV series too.

First time I glanced on my watch was 1h30m in. - Way too long, bored the pants off me.
Click to expand...

Yeah I didn't really get the appeal, the last 30m was more interesting than the whole rest of the movie.

Knives Out was pretty good

In some ways I agree with you but I also think that in some way it's a bit of harmless turn off your brain escapism.

I watched Kill Bill Vol. 1 for the first time the other day, I wasn't expecting so much comedy gore. Very Tarantino, looking forward to watching the second one at some point.

At my university, there is a long-standing film club, doing movie nights in a 300-seat auditorium. Usually the attendance is low to mediocre, but I remember one time... they were doing a Kill Bill double feature. Sold out. Before the first movie, after the commercials, one of the club guys came out, completely overwhelmed, and said yes, they were people out there right now to acquire more beer.
OK, that was when the movies were somewhat new still.

First time I glanced on my watch was 1h30m in. - Way too long, bored the pants off me.
Click to expand...

Blayde said:
Yeah I didn't really get the appeal, the last 30m was more interesting than the whole rest of the movie.
Click to expand...

How deep are you into Manson lore/US counterculture history? Tarantino assumes a shitload of prior knowledge as he builds a lot of suspense from the audience knowing that the main characters interact with a bunch of serial killers while they are completely oblivious about it.

As I put it on the Telegrams: "You must absolutely know that [Manson] had a hippie slut girl death cult and that they killed Roman Polanski's pregnant wife in her home while he was away in Europe on a shoot, but as always with Tatantino, the more pop culture you know the more references and side-jokes you will get."
Last edited: Feb 16, 2020

Dr_Grip said:
How deep are you into Manson lore/US counterculture history? Tarantino assumes a shitload of prior knowledge as he builds a lot of suspense from the audience knowing that the main characters interact with a bunch of serial killers while they are completely oblivious about it.
Click to expand...

I knew about the murders at Polanskis house by Mansons lackys, but true, I didn't connect that with the hippie commune scene at the ranch. - But that didn't matter, as the gimmick of building tension worked very well during the scene anyway. - That was the moment when the movie finally got interesting. - But that was also the moment when I was so buzzed out by the two hours of boredom before it, that I simply gave up.

I watched the ending later on, but while it got better, it couldn't save the whole movie. - It's simply one hour too long with walzed out scenes (Sharon Tate going to the cinema, and lot of POV driving) and on the other hand still with sudden time-skips (6 months in Italy and married an Italian woman = done in a few minutes).

All in all a beautifully styled and shot picture, and some good acting, but for about 3/4 of the movie there is no plot. = Nope.

Yeah, i had the same feeling, i knew about the overall backstory but that didn't help the first two hours

You have to take Once Upon a Time in Hollywood as a character and "feeling of the time" portrait, then it doesn't matter that not much is happening. I enjoyed it immensely.

This thread should be called, "Ruin a Movie For Someone That Might Want To See It".

I will still see it eventually.

Just saw Knives Out, it’s been a while since I enjoyed a mystery movie as much as I did this one.

Finally got around to seeing Joker. Unsure what to think of it. On the one hand, it's an amazingly well-crafted film that looks not only like a film set in the early 80s, but one from the early 80s. Of course, it owes a lot to early Scorsese, especially Taxi Driver, which clearly served as a main inspiration for the filmmakers. I rate it higher than The Dark Knight - which I did not like at all - for the level of technical perfection alone.

But still - I did not like it. After longer discussions with @_Jules_ I still can't really pinpoint why. For once, I found the portrayal of the abuse Arthur/Joker suffers to be tone-deaf and one-noted. But this is not something I object to in many other cases.
Then, there's the fact that I think this would have been a better film if it would not be a Joker movie. The superhero connection only takes away from the story itself, as it means I once again (as with The Dark Knight) am asked to take serious the inner workings of masked and caped supercreatures. This holds true doubly since it has already been stated that this a a one-off film and will not tie into the Pattison Batman movies (and the filmmakers don't even try to make any distinction between Gotham and New York City).
Finally, I somehow felt the films view of the world and society was too bleak, too hopeless, that the amount of abuse and evil Arthur suffers are not grounded in real human behavior enough. But then again, I have no idea how bad it is to live as a visibly mentally challenged person, and teenagers have been setting fire to homeless people just for the fun of it...

What has to be said is that I like how this film kept me thinking, and discussing.
Last edited: Feb 17, 2020

Here's some ideas why people feel uncomfortable:...
Click to expand...

I just watched Joker again on a United flight. I felt the violence was hype, the body count is maybe 7 total. Most of the movies success was hype. I don't think it was great and mostly saved by Joaquin Phoenix. The director Todd Phillips said you can't do comedy presumably not seeing Baskets from his former colleague now on FX but there is also It's Always Sunny in Philadelphia, What We Do In The Shadows, Atlanta... and that's just on one basic cable channel. Todd Phillips said that because he knew it would get the attention of unfunny offensive people who wouldn't see a character study. Oh it's super violent they hype that to get kids. It was all hyped up for a mediocre movie with a great actor.