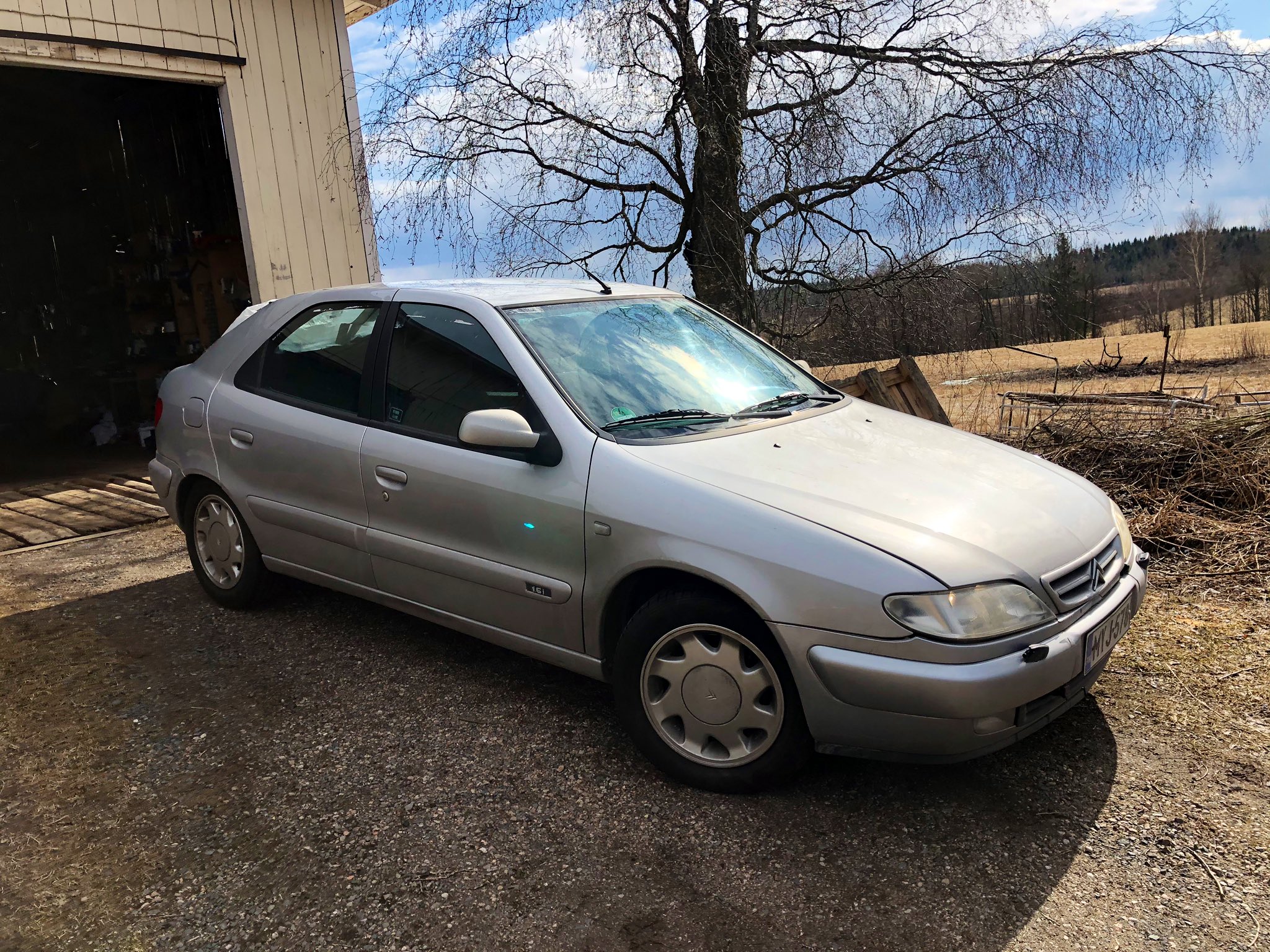 The other day I bought two sets of tires for my project Neon. You're thinking, right, what does that have to do with a Citroën?

The deal is that the tires belonged to @Posambique's family heirloom Xsara, which he wanted to get rid of. It was bought new by his granddad, and it was handed down a couple times in the family after that. It eventually got vandalized and the inspection date is nearing, and no-one wanted to invest in the Xsara any more. The tires were the best thing about the car, but I couldn't get them without getting the Xsara as well. I shrugged in a Gallic fashion, handed over the money and headed north with the Citroën absolutely loaded with tires, balcony tiles and beer.

Let me list the issues with the car right here, other than that it takes space from our already crowded lawn:

All in all, it's a forgettable 200,000 km French hatch with just 90PS. When driving up, I thought it just had so much extra load that it wouldn't want to move. Even with all the crap taken out it still doesn't really accelerate with verve.

What to do, then? My original plans included driving it to the scrapper with some worthless tires and calling it a day. But after 500km in the Xsara, I inexplicably started seeing the positive sides, nearly completely hidden by the numerous issues. It drives well! I like the gearchange. It's comfortable and the seats are still presentable. The radio works. The gutless TU engine responds well even if it can't give anything. And importantly the body doesn't appear to need any welding.

I put some Citroën ZX SP3 wheels on it from my storage and they not only fit it well, but it already looks classier. In the near future, I'll go get some extra road legality time by having it inevitably fail the MOT, but which means I can still drive it for a month or two without sticker plates, and then it could/should get readied for autocross, battling the Neon (even if this is a class below it due to being 1600cc).

If the rear axle is verified to need work, or the cambelt goes, or the catalytic converter is gone, or there's anything expensive in the future, the car will be scrapped and that's it. But if I can sneak it through the system so it can take part in the rally we always do, when we have some dates for it, the Xsara gets to die another day.

I mean, who else would we expect to buy an entire French car for the rubber? There are better Citroëns, there are worse. Enjoy ragging the shit out of it.

If you fix the A/C and find storage for it until the roadtrip starts, sure!

public said:
If you fix the A/C and find storage for it until the roadtrip starts, sure!
Click to expand...

Provided a shed wouldn't allow mice inside to chew wiring.... That would be difficult and/or finding storage that isn't hundred-something a month near a major airport.

I fully support the idea of @93Flareside taking this to the 2021 Balkan roadtrip. I do understand the car is a dog, though, and that it will probably be scrapped until then.

Anyway, I drove my cousin's facelift Xsara with a 1.9 diesel engine a few years ago, it was nothing to write home about, so I understand that you're not exactly impressed with this car. But it was reasonably comfortable and the gearbox was good. If I ever needed a compact hatchback for not a lot of money, I'd put the Xsara on a list of cars to consider.

Even with a punch in the face, the pre-facelift Xsara looks better than the facelift car. There isn't much wrong with these, they just aren't worth anything even in VTS guise, let alone regular spec.

Whoops, I thought it was because you were planning to scrap it. I do understand that a 200,000 km car will always need some work (our Saxo has some 185,000 on the clock at the moment), but since it was vandalised, and has an ancient cambelt, along with the other problems it has, I thought it wasn't worth the repairs.

But then, I'm not exactly sure what would classify a car as a dog. (I assume it's different standards for different people.) Anyway, I would be kinda glad to see the car make it to and through the 2021 Balkan roadtrip.

public said:
The tires were the best thing about the car, but I couldn't get them without getting the Xsara as well. I shrugged in a Gallic fashion, handed over the money and headed north with the Citroën absolutely loaded with tires, balcony tiles and beer.
Click to expand...

I'm trying to imagine your girlfriend's reaction to this, but well, she know you...

I've seen you buy a Polo cheaper than a tank full of fuel, choose an old Panda as a suitable vehicle for a 5000 km roadtrip, get a run-down right-hand-drive Volvo delivered to Finland by a friend from the UK because such a car is the obvious choice for a daily driver, but getting a car just to have the tyres is on another level. Well, at least half a level up. It's you, after all. I'm not even surprised.

Let's say she was not too thrilled about the latest purchase taking space at our farm, but at least this makes the Neon look more cool

The current plan is that I try and check just how bad the exhaust is and if it can still be patched up. Then I change the camcover gasket and try to get it past an MOT inspection with the rear glass still smashed in (it's legal actually!). Depending of those outcomes, I'll trailer the car to a friend's place with the Volvo (so I can get back from there) and it can stay there until needed. In that town, there's a Xsara being parted so I can grab the hatch from that if the car deserves one.

Is the typo in the title on purpose? Undesirable is not a French word (it should be "Les Indésirables").

It's because I don't know any French at all

RdKetchup said:
Is the typo in the title on purpose? Undesirable is not a French word (it should be "Les Indésirables").
Click to expand...

We europeans like to be rather ignorant of actual french spelling, we just like to fake-use it

93Flareside said:
Provided a shed wouldn't allow mice inside to chew wiring.... That would be difficult and/or finding storage that isn't hundred-something a month near a major airport.
Click to expand...

I actually don't think it's unreasonable to think I'd foist this to someone for the 2021 roadtrip. With a junk hatch swapped in place of the busted one and with the demerits whittled down, it should be OK to MOT a year from now and I should be able to store it somewhere. But there are a few things it really needs before a roadtrip anywhere: working door locks, new cambelt and A/C checked. With those it would be no worse than some of the things I've driven long-distance in summer conditions.

Amazingly I might have found a silver hatch tailgate in the small town where I dumped the car for the time being. It's from a facelift car so there will be some parts-swapping to be done to make the trunk lock work, but as long as it closes and stays closed it's going to be fine.

Swapped the camcover gasket so at least one of the advisories on the sheet should be taken care of Sadly, no other progress on the rap sheet was made today as the greasepit was occupied the whole day by a poorly E61 530d. Blocked DPF by the looks of it.

I also couldn't get the replacement hatch despite going to see it, as the seller wasn't present and didn't answer his phone the whole day. I'm driving back tomorrow, leaving money and taking the hatch anyway because MOT runs out Monday and an attempt at it needs to be made. The part looks good enough, too, and since it's already gutted it's not problematic to bodge on. 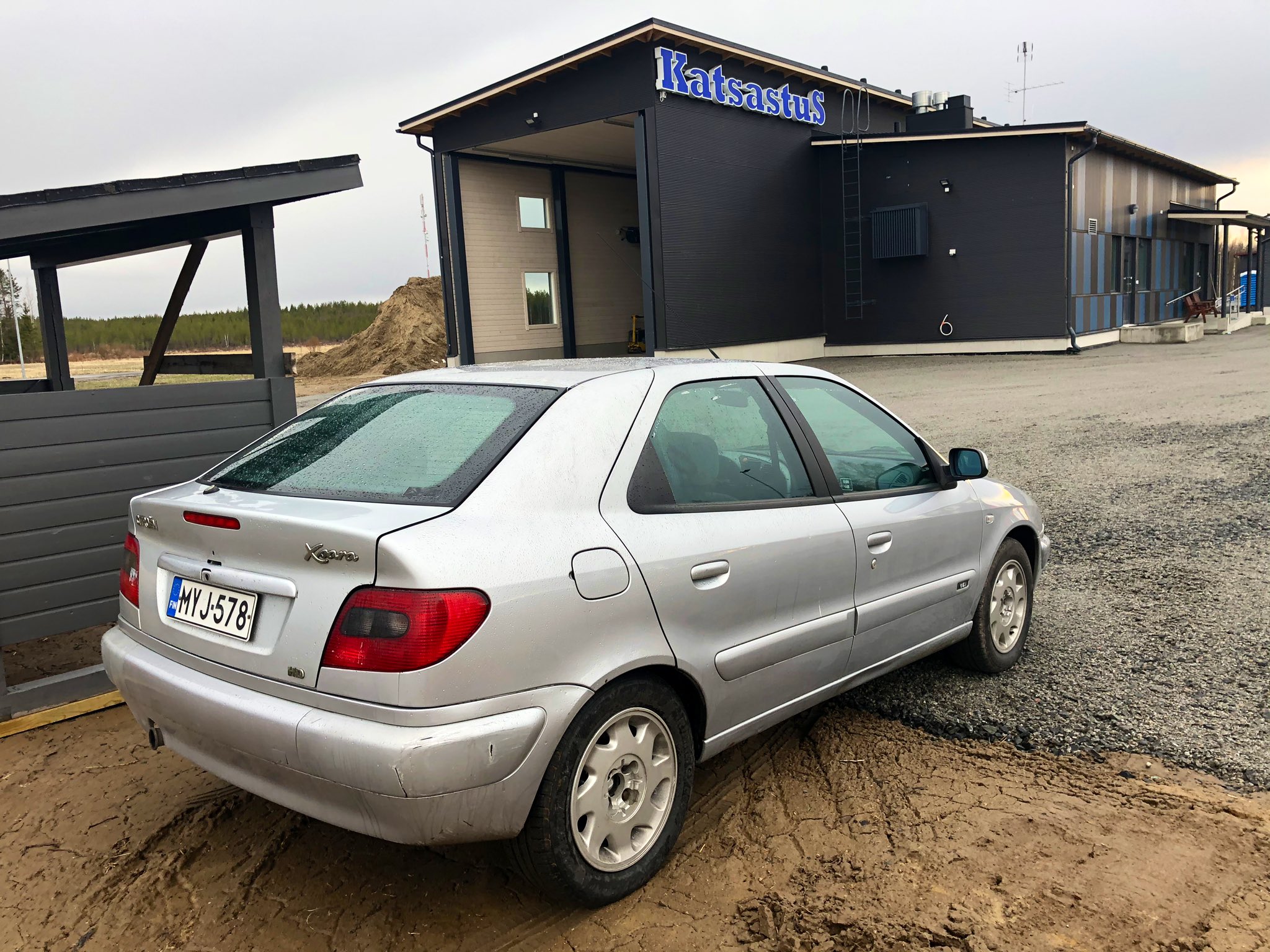 Spare hatch is on. Drove to the parts contact with no hatch on at all and lifted it in place on the spot and redid the bolts. Even after adjustment, fitment is ambitious but it'll do for now. Using a facelift hatch is slightly problematic as the locks are different. I had to redrill a bunch of holes and drill out the spot welds on the lock mount, then fabricobble (great phrase) the lock in place. The lock button would not fit properly either, so I embiggened the hole. It's all a big bodge and there was no time left to sort out the wiring, but right now the hatch shuts and locks.

I would advise against using a facelift hatch if possible, and now I went with one because it was still the same shape as the hole in the car and in the same town. I don't think I'll buy another, pre-facelift hatch for the car but if I did, it would solve a lot of issues.

I was also able to replace the ARB link and check that all lighting apart from the hatch works, so I'm cautiously optimistic the advisories will be limited to non-functioning plate lights, 3rd brake light and of course the exhaust that's not fixed at all. But even a manageable demerit list and a fail will do, as that will buy me more time. 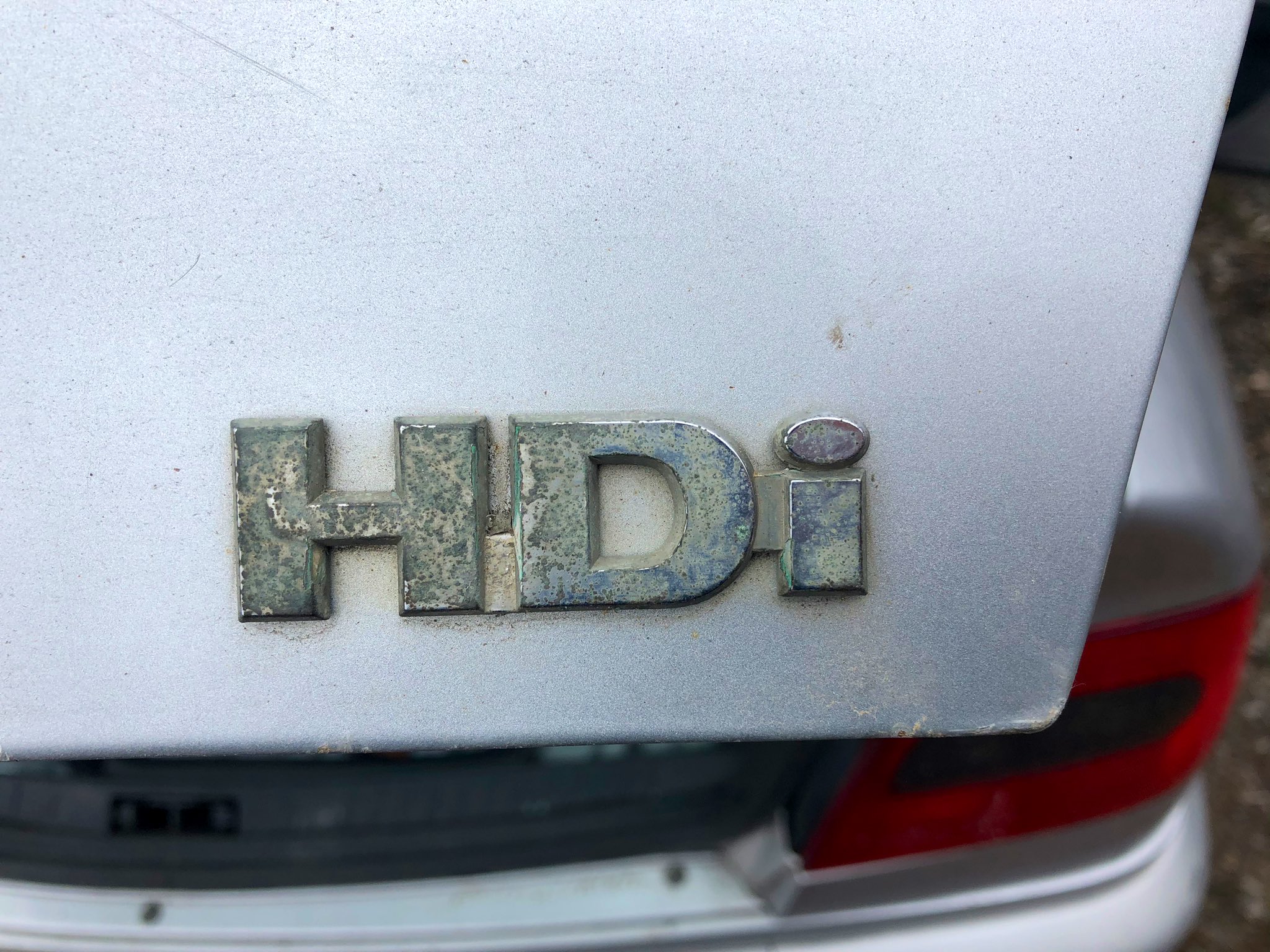 I did fix one glaring issue. The spare hatch was from a 2.0 HDi which obviously isn't right for a 1.6 petrol. 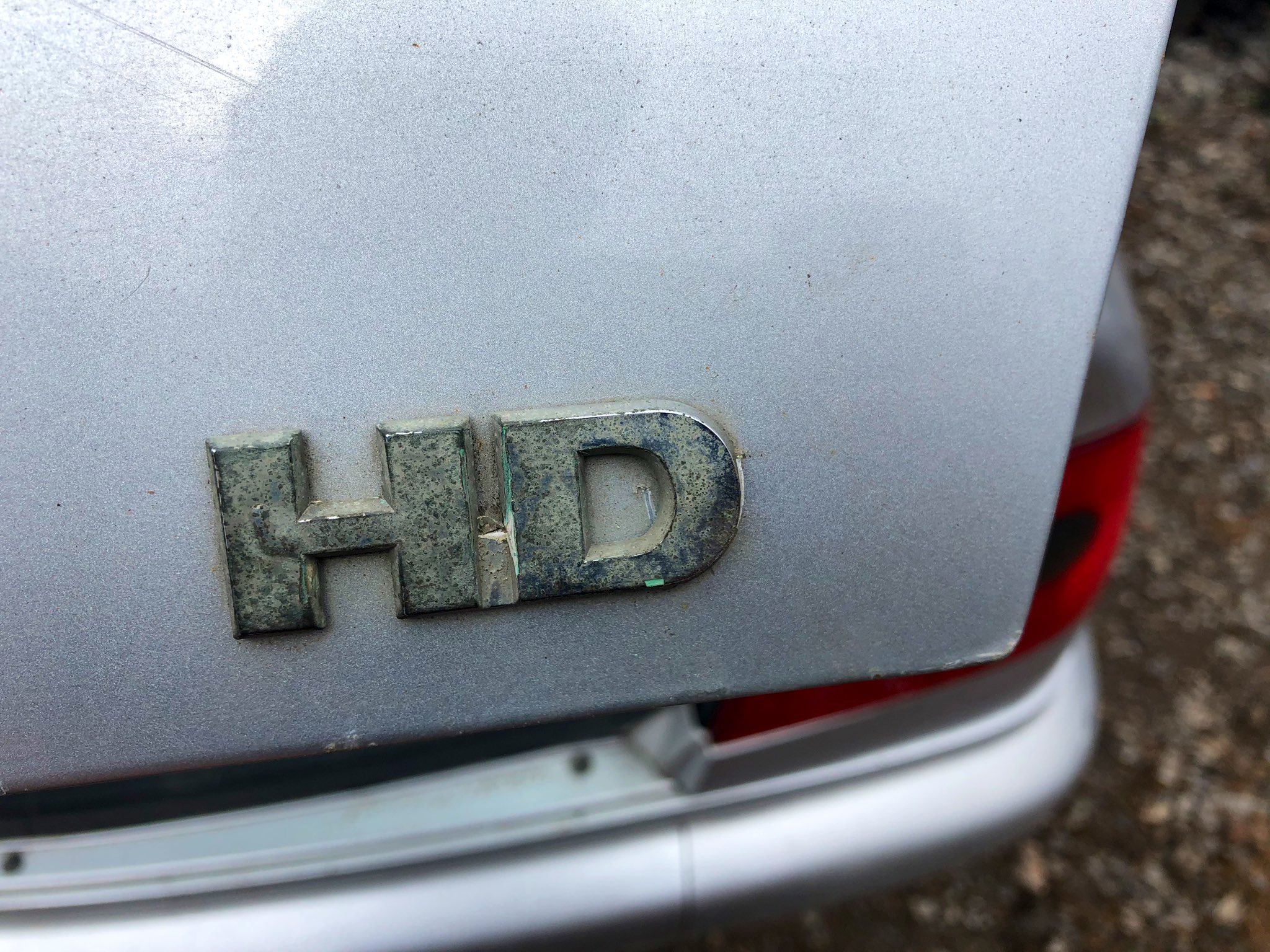 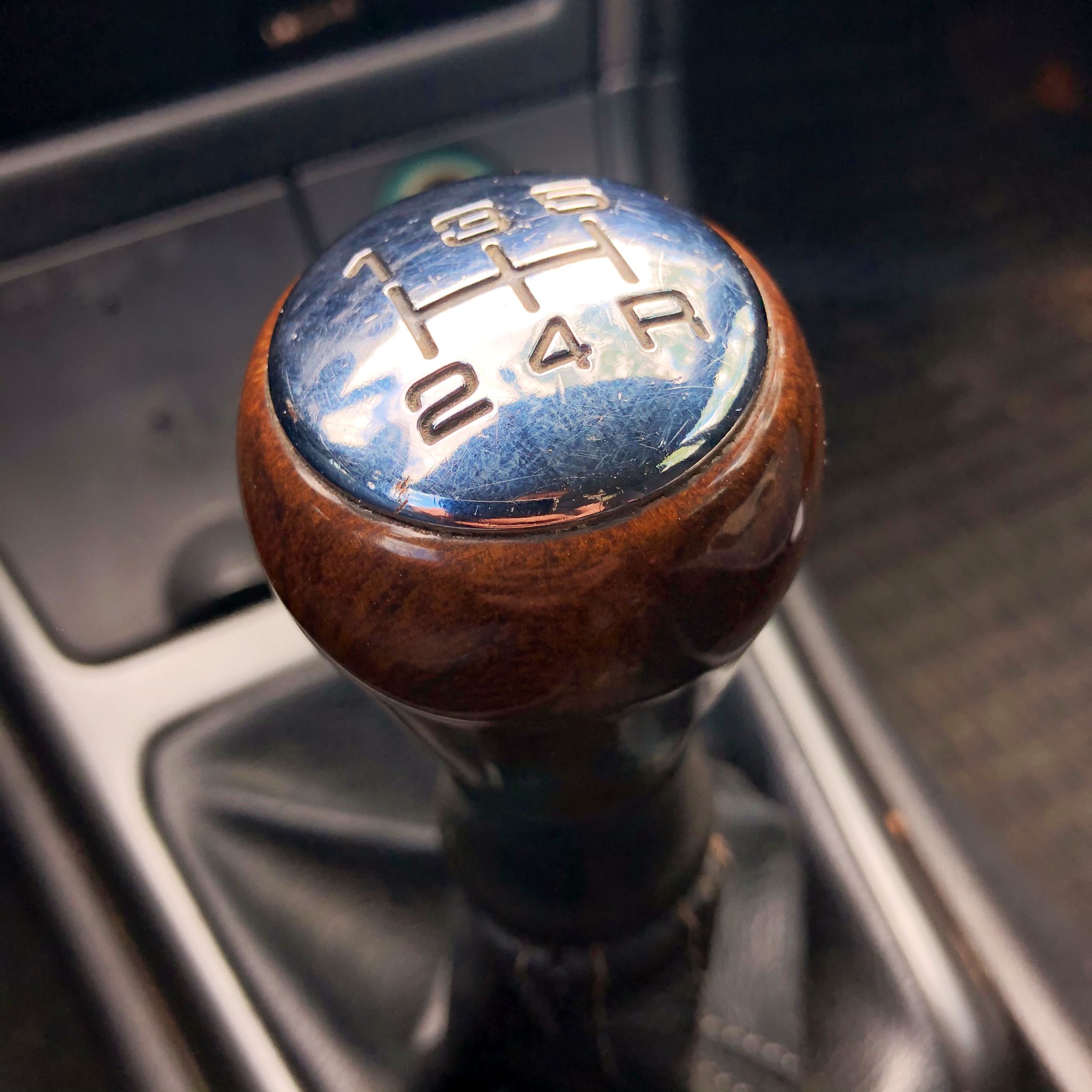 The original gearknob of the Xsara is nice and well-weighted. The same cannot be said about the plooden gearknob I ordered ages ago for the 405. So, since it's likely I'll be holding onto the 405 a fair bit longer than the Xsara, I pulled the original, well worn gearknob off the Xsara's gearlever and replaced it with the fake wood job. It's horrible and makes the shifter action less satisfactory, so it can go into the grave with the car when the time comes. 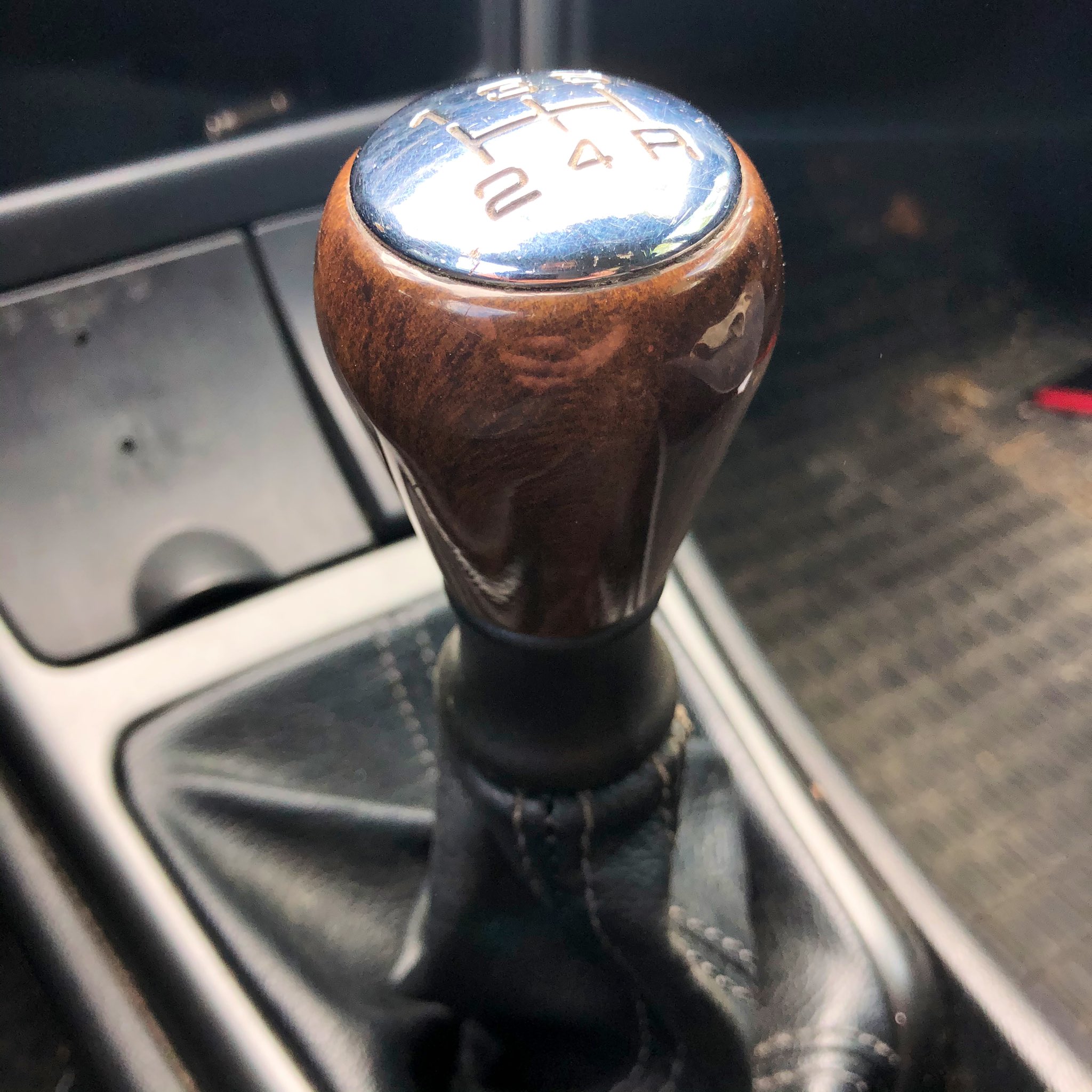 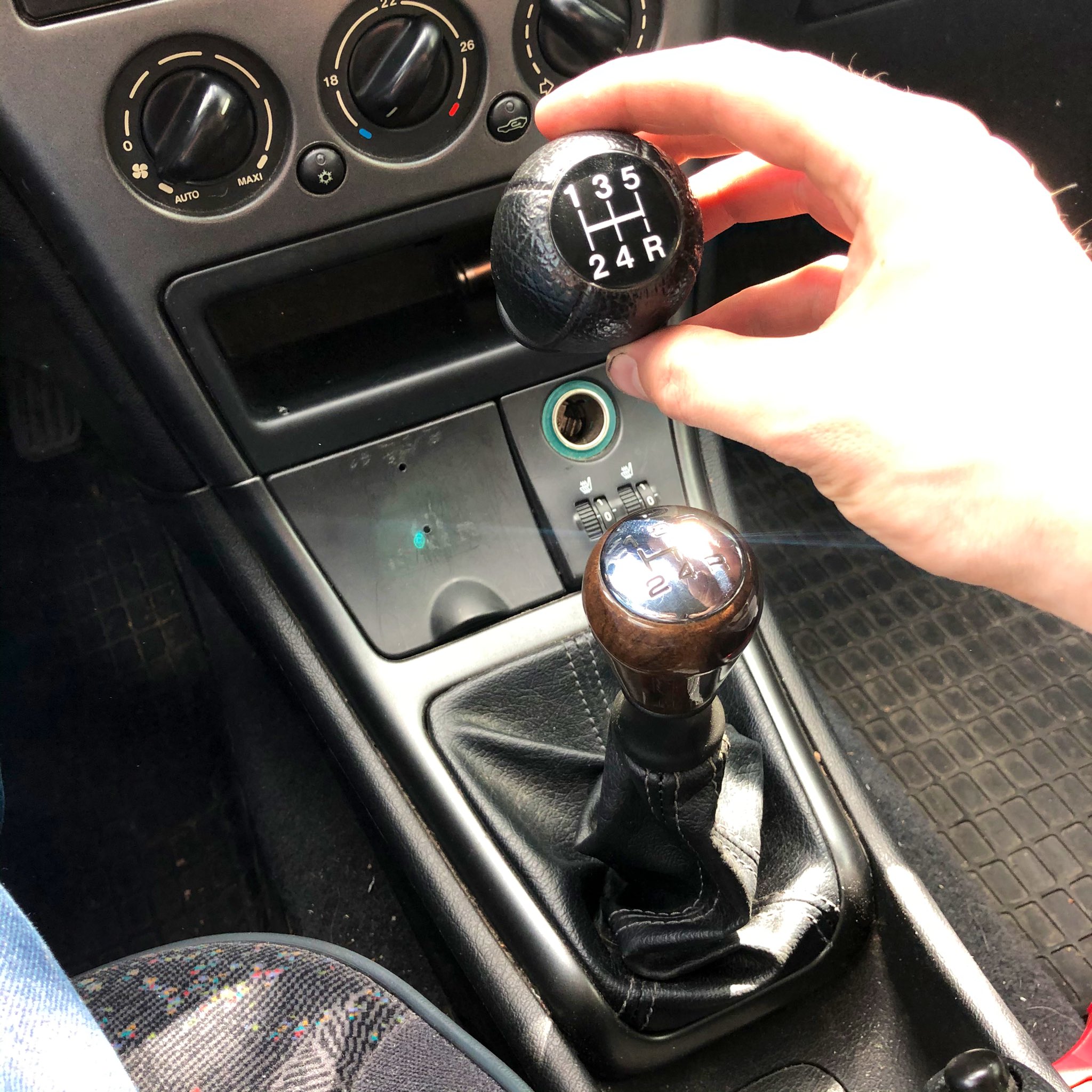 I had my GF's brothers weld up a passable imitation of a Xsara exhaust, combining the rusty remains of what the car had with some discarded bits and pieces of W124 pipework. After we cobbled the thing back together, it was time to go for a test drive. It.. kind of feels faster now? At least the terrible rattle has been replaced by a satisfactory snarl and the shifter does feel quite good, too!

When I got the Xsara, it didn't feel at all like a suitable replacement for the 205 XS I sold some time ago. But now that it feels really good to beat on and sounds quite decent as well, I think I can find something in the same vein inside the Xsara. It's duller, slower and heavier, but it has the same genes.

Also, the ORGA/RP number of the Xsara reveals that it was born on 10 April 2000, meaning it has by now comfortably passed its 20th birthday.