So thanks to Beni who really helped out here, that lift is a tool I want desperately now It makes life so much easier!!!

Anyway, so this is what was done: cambelt, water pump, obviously all the tensioner and pulley stuff, gaskets etc, thermostat, valve cover gasket, crankshaft seal, camshaft seals, air filter, spark plugs, coolant ... Including a coolant flush and finally getting 4 bolts on the harmonic balancer! (The first time since the new engine went in that it had 4 bolts ... Oh, and the boot spring tensioners so the boot holds itself open now!!!

Here are some pics: 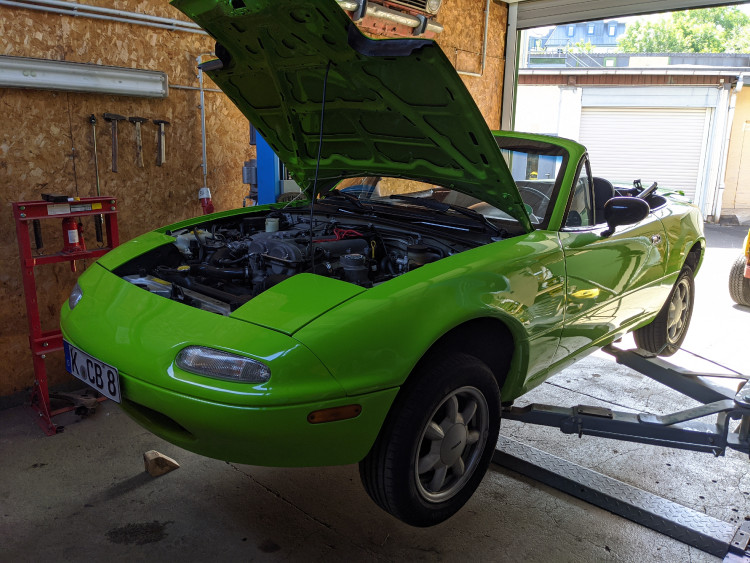 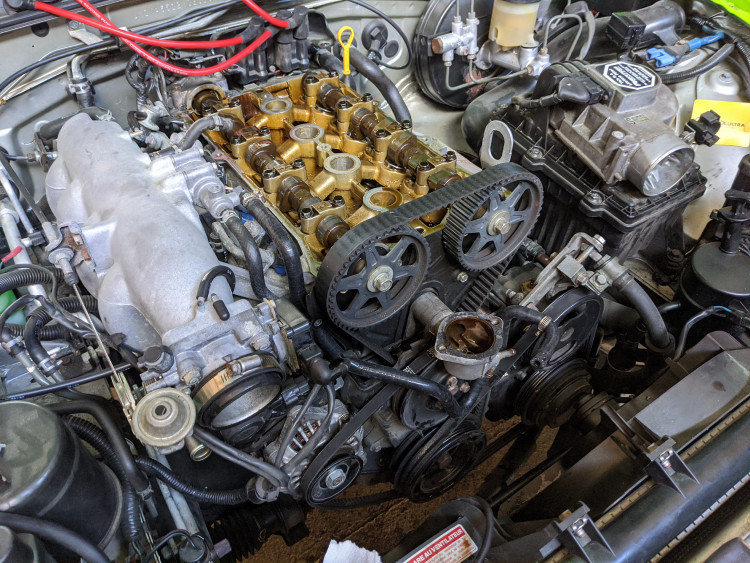 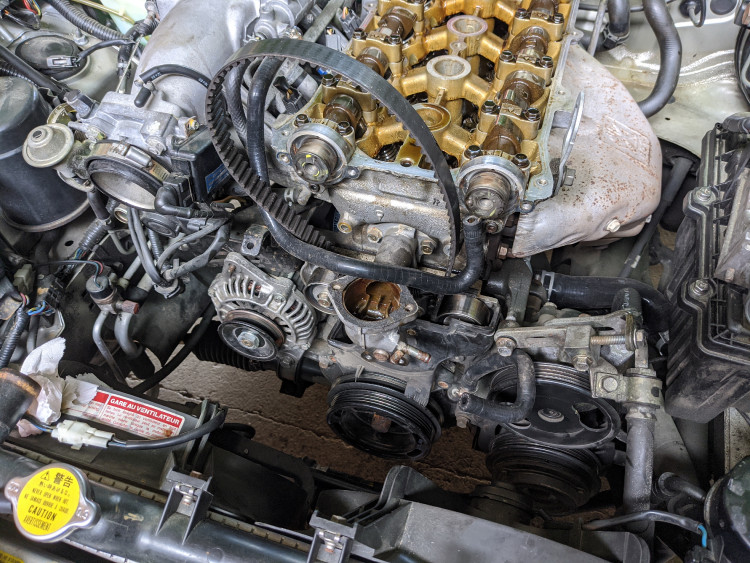 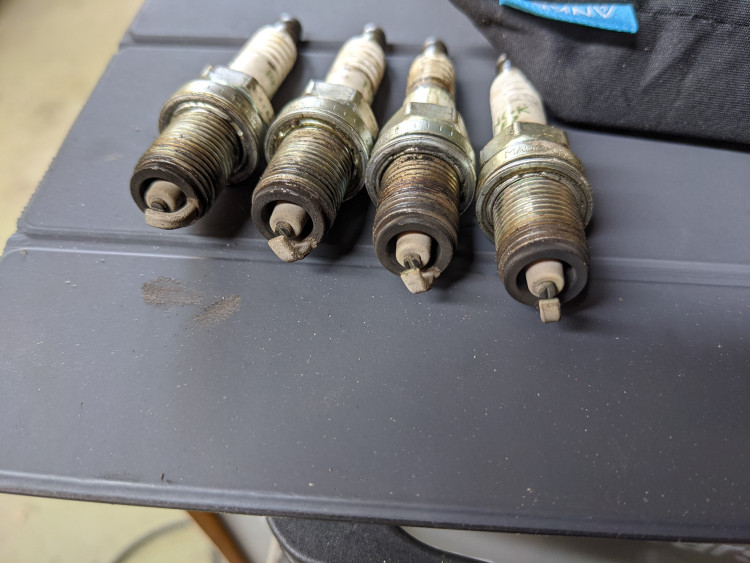 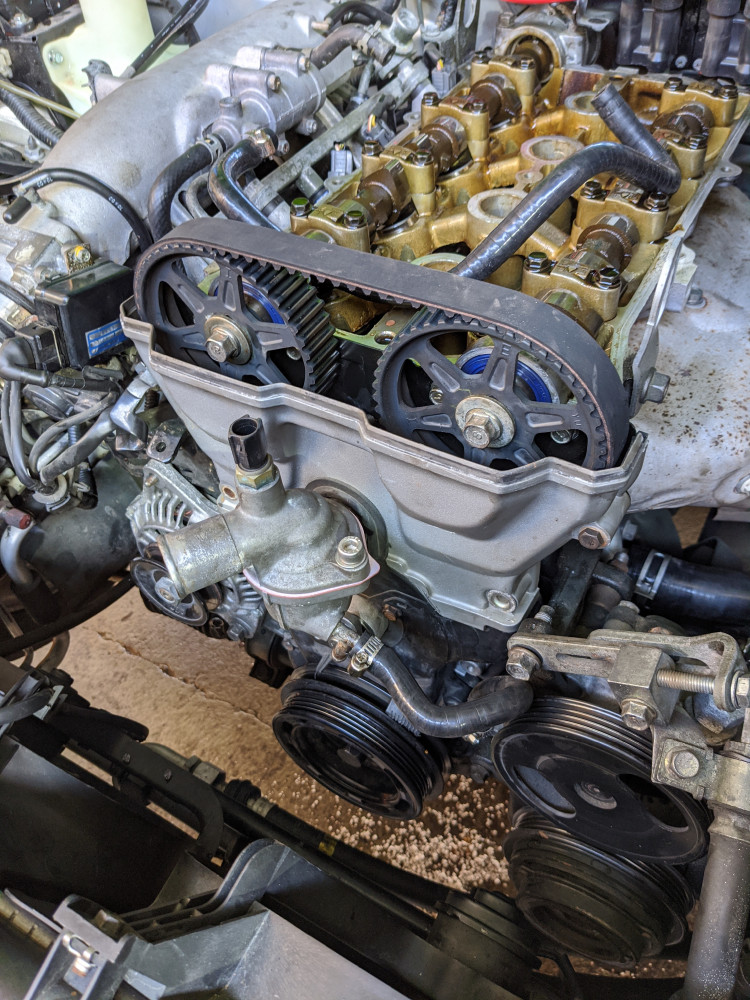 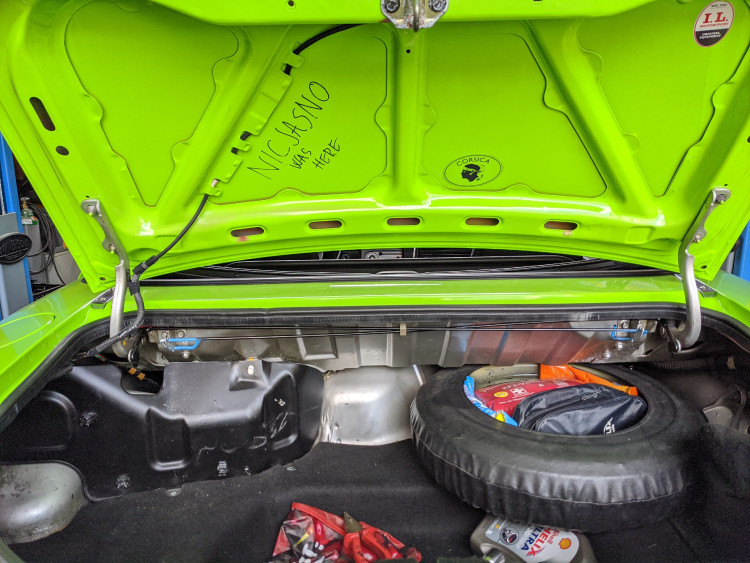 And sadly despite all the work put in, the rockers are starting to rust again ... The car hasn't been driven in winter and was garaged for the last 12 ish months. But the consensus is that they needs to be rebuilt and replaced completely. I will hit them with a load of wax and maybe rust converter in some places to preserve it as best as I can. I expect the work will need to be done in the next 4 years, I will need new front fenders too at that point!

Anyway, here are some pics of that: 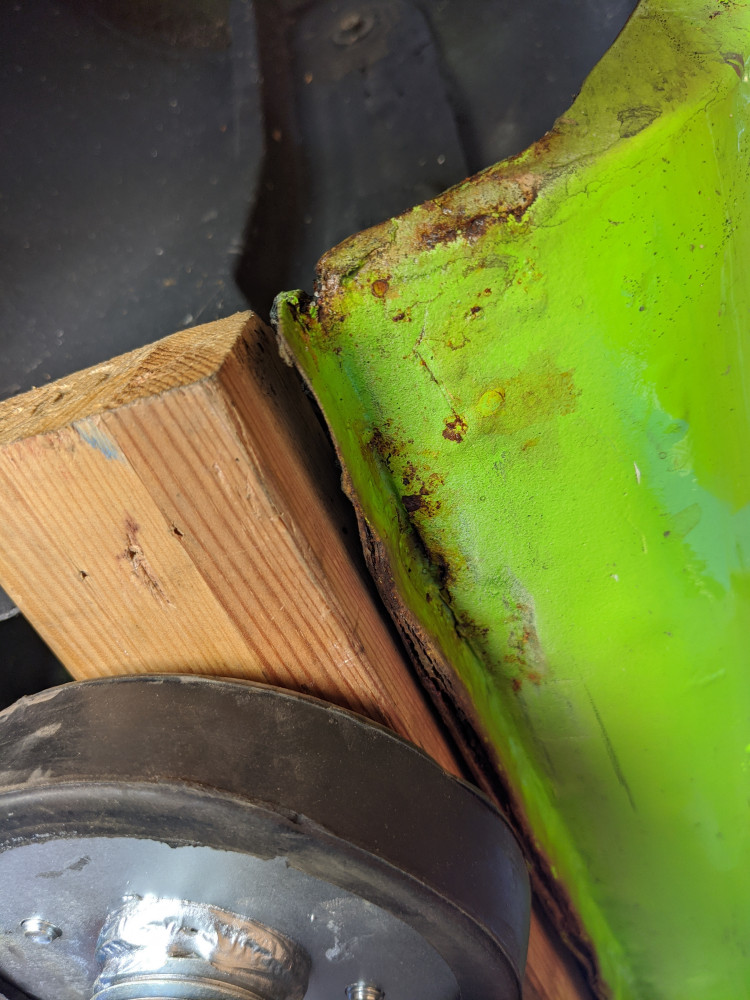 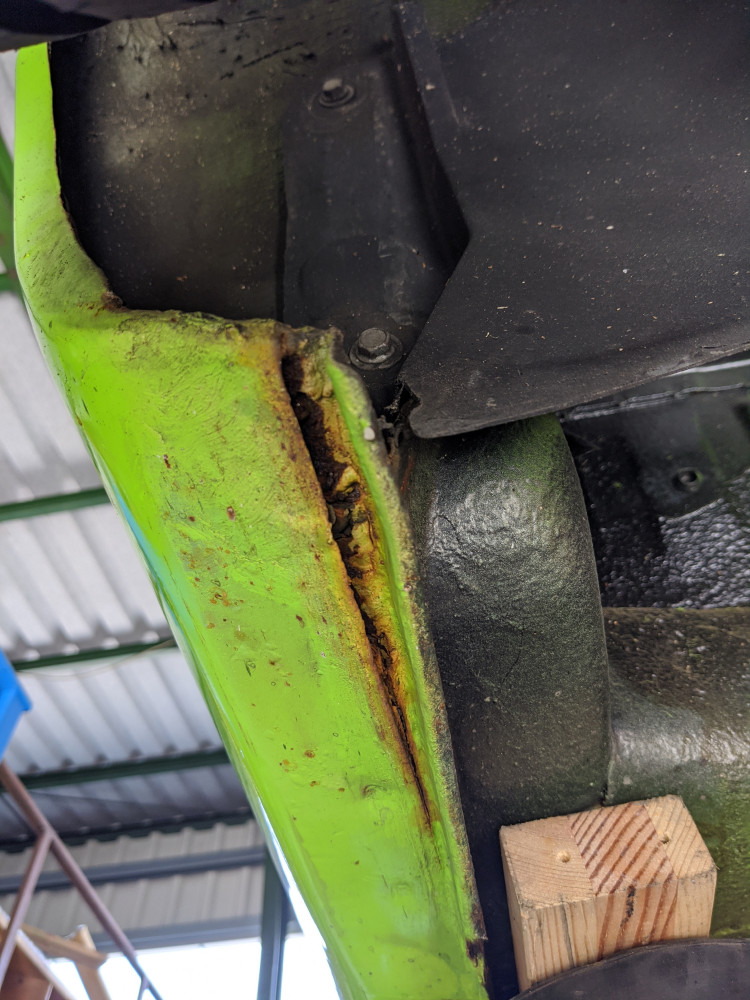 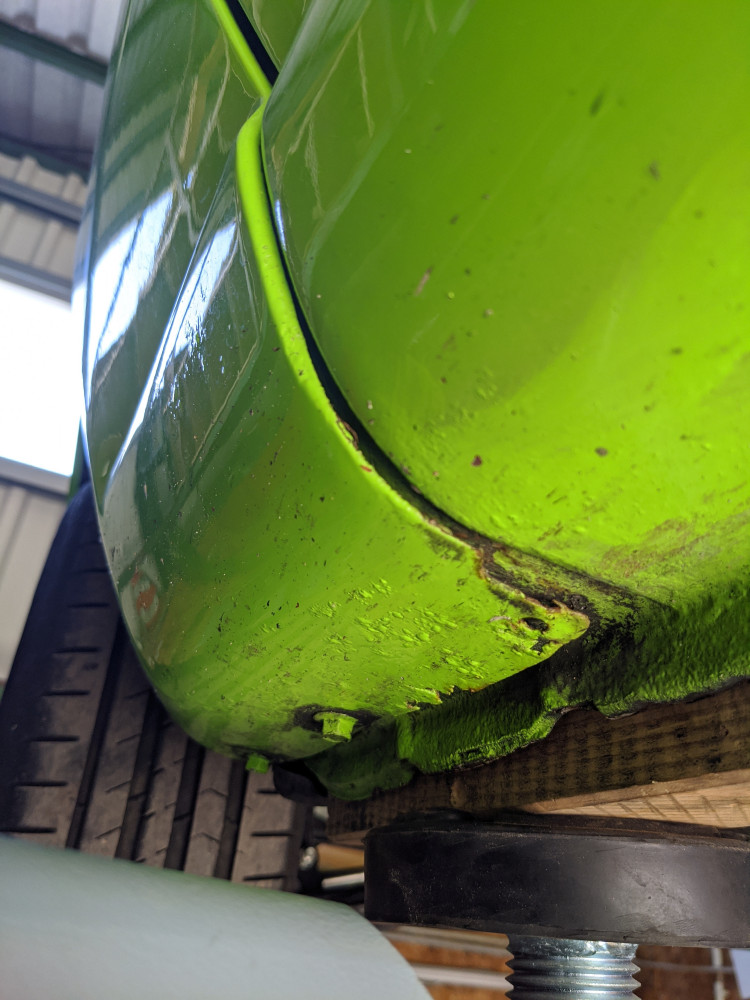 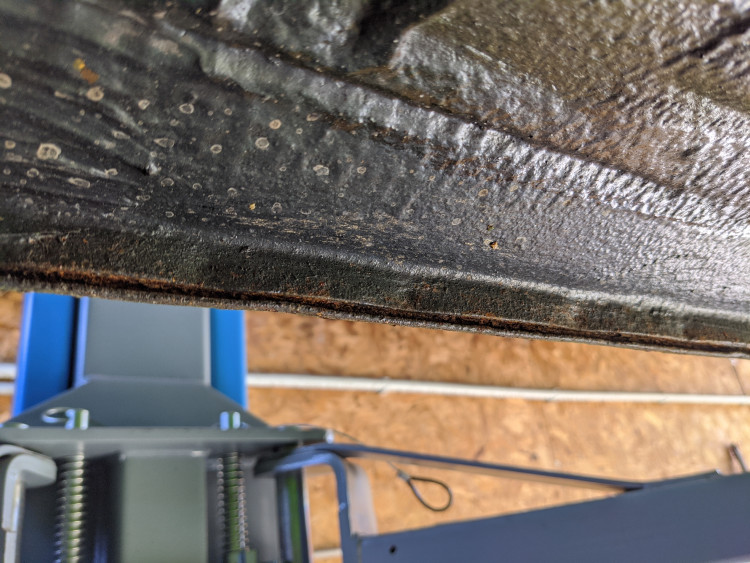 Also, the boots on both upper ball joints on the front suspension are split so will need to be replaced for TÜV I guess? These were new aftermarket ones ... I will get Mazda original as replacements.

Anyway, after all of that the issue was not resolved. We tried a spare AFM from Beni's black car and that did not help...

However, we when welding up the exhaust to stop the rattling noise we noticed that it might be the inside of the catalytic converter that is broken to pieces... Additionally there is the sound of rushing/disturbed air coming from the center of the car (Where the cat is) ... Given that the whole exhaust needs replacing sooner rather than later I will just replace the cat.

Another theory is the o2 sensor might be faulty causing it to run lean on WOT (See the spark plugs) so I will replace the o2 sensor also while we are at it.

Additionally the coils may be an issue... We were planning on testing those from one of Beni's cars, but the connector is different on both of them ... A set of aftermarket coils is pretty cheap from the U.S. so I might just replace that while I am at it ... Given they are 30 years old anyway!

So all-in-all it was a really worthwhile trip, important maintenance was done, it also proved the theory about timing being wrong was false which is a step in the correct direction!

I hate rust! Poor Luigi. You should sell him to @captain_70s quickly before it develops any further. Great to hear you're making progress anyway.

Aw, that's too bad about the rust. I wonder with the ruined cat and perhaps bad O2 sensor, you can get this non-rev issue figured out!

Matt2000 said:
I hate rust! Poor Luigi. You should sell him to @captain_70s quickly before it develops any further. Great to hear you're making progress anyway.
Click to expand...

I want the car to be driven, not rot in the Scottish countryside...

93Flareside said:
Aw, that's too bad about the rust. I wonder with the ruined cat and perhaps bad O2 sensor, you can get this non-rev issue figured out!
Click to expand...

More weirdness today, it ran fine a few times and then didn't ... The cat is making even more horrible rattling noises, and give it's totally f****d anyway I ordered a replacement.

I also ordered an O2 sensor, it is a pretty easy swap and it's probably 30 years old too...

loose_unit said:
The cat is making even more horrible rattling noises, and give it's totally f****d anyway I ordered a replacement.
Click to expand...

I needed a moment to realize you were not talking about your pet...

So! Some parts arrived! 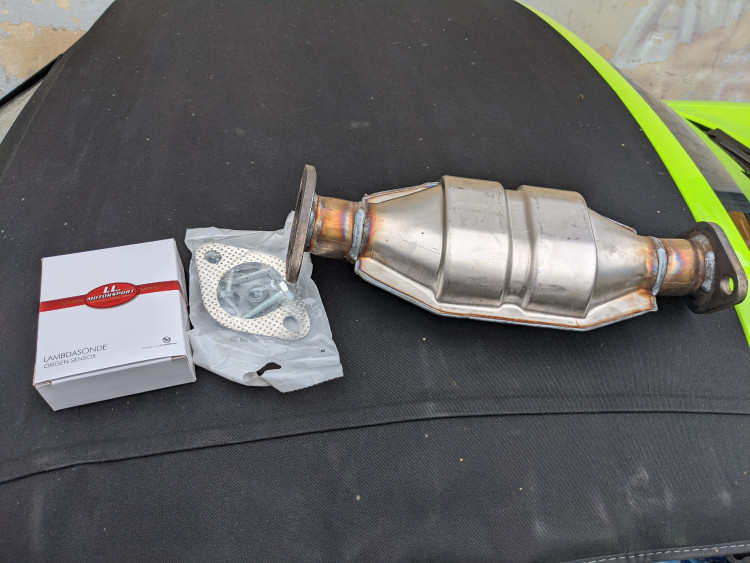 The old cat came out and as a surprise to nobody it was ... well ... fucked 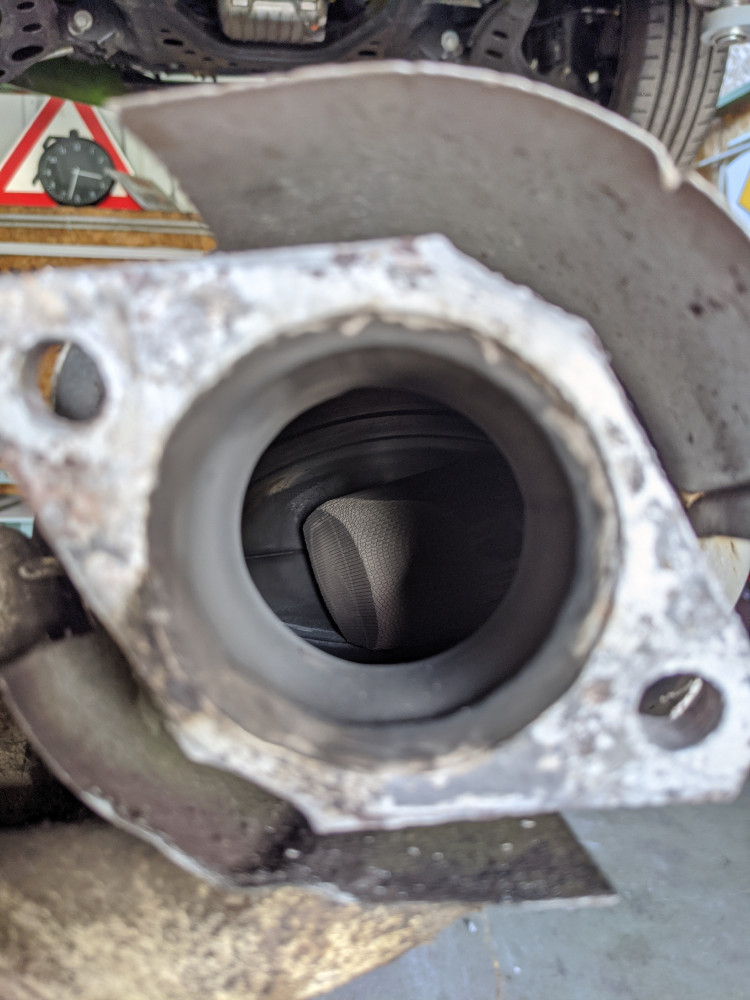 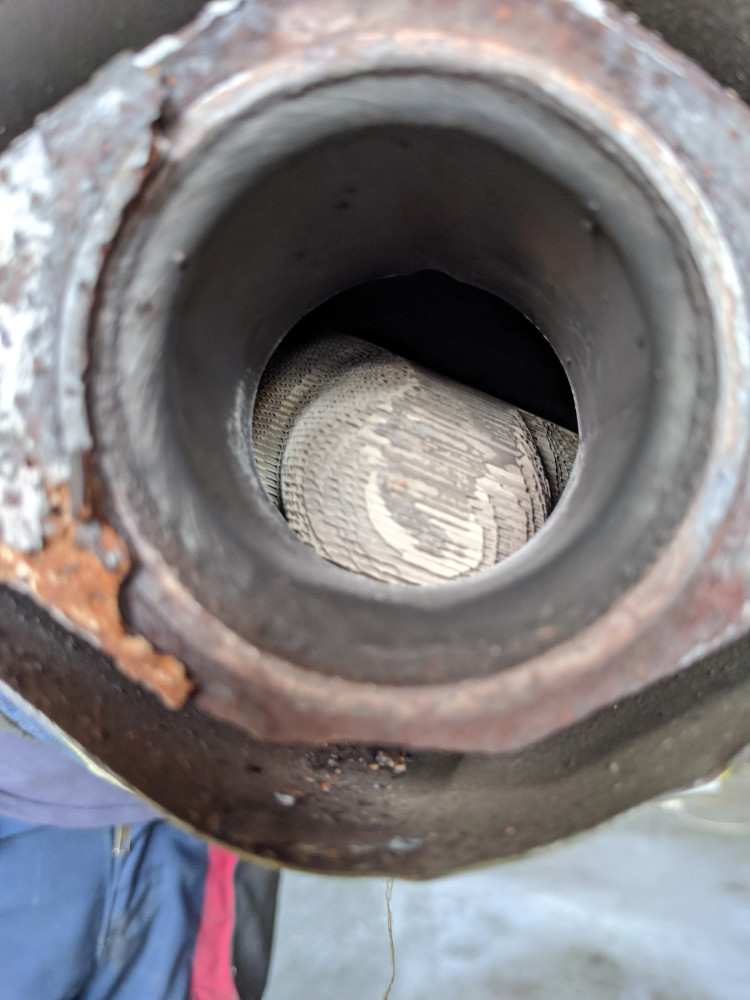 The source of the rattle:


The none one looks a bit better... There was some slight adjustment needed as it didn't quite fit the bolt pattern on the pipe coming from the headers, so some filing action happened and it was made to fit: 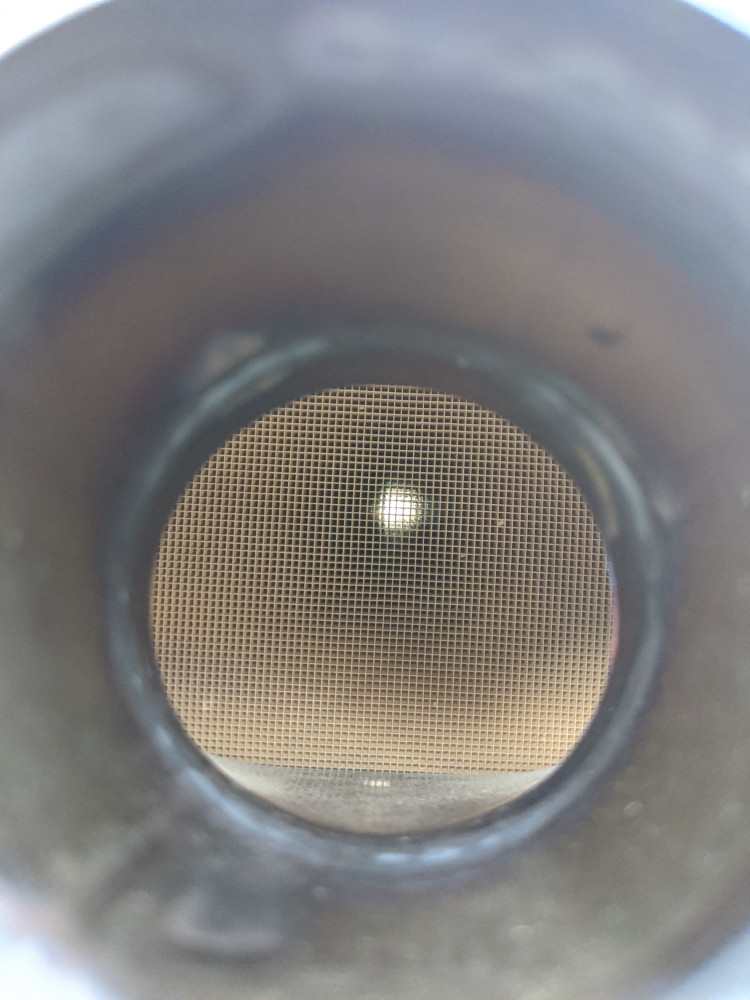 After that it was tested and confirmed that everything worked perfectly fine but we went ahead and installed the new o2 sensor regardless: 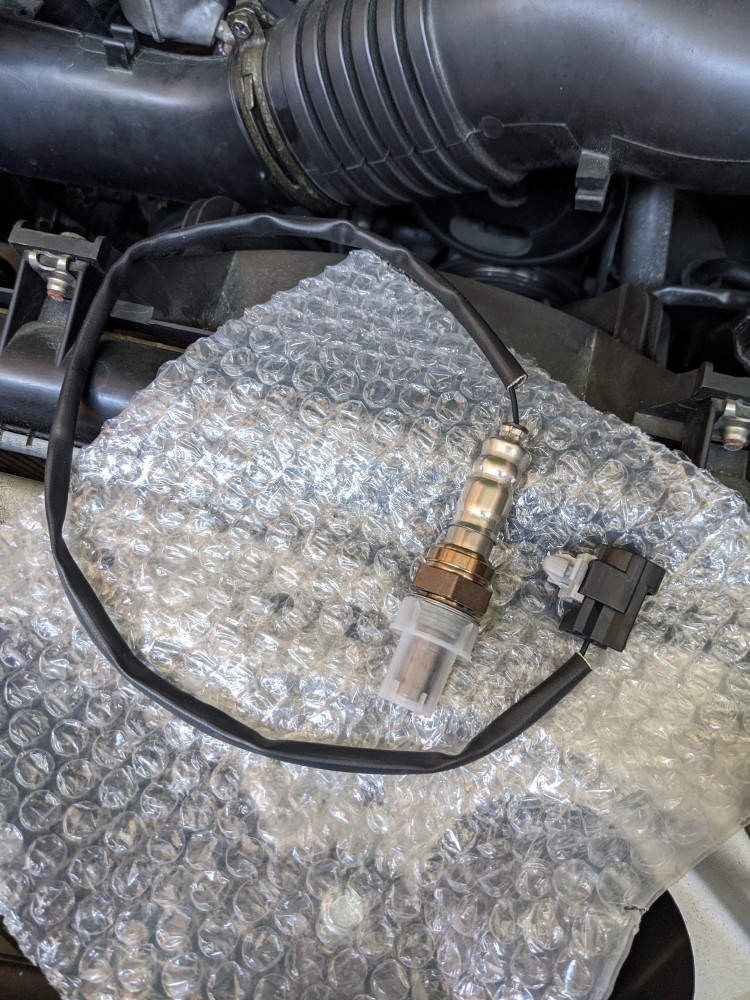 And it works again! 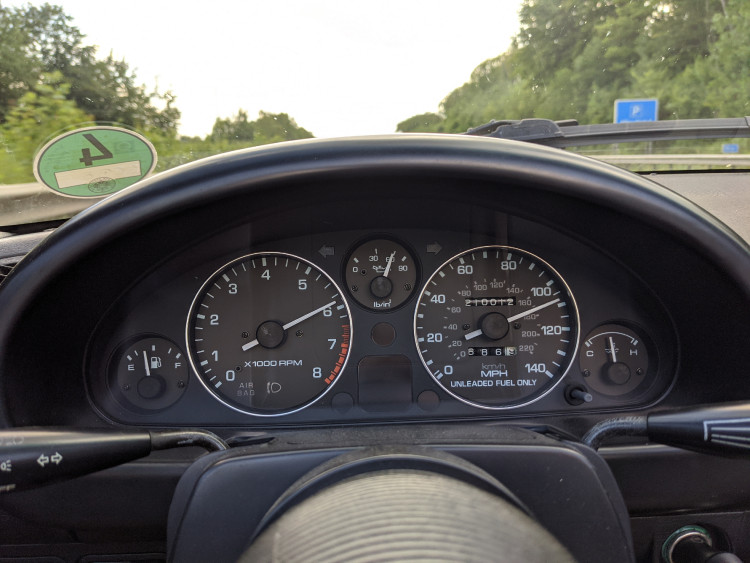 I will order new coils in the coming days as every sensor that I can think of has been replaced or changed during the engine swap, the coils have a different plug than the ones from the EU so I will just order one from the U.S. and hope the connector is correct, if not I will have to replace the connector...

I did notice that the exhaust was a bit loud after parking it at the supermarket, but it seemed reasonable when I restarted it - I will keep an eye on it of course

My guess is this cat has been partially broken for the last 5 years as the noise was always there and just got very bad during the last Ringmeet but I didn't experience any issues until the summer later ... Funny how these things happen!

Another thing I have noticed since doing the water pump, coolant and thermostat is that it seems to run a bit cooler than it did before ... I do not believe that the thermostat is stuck open as it warms up fine, and even flat out in fifth gear up a hill did not seem to move the needle...

It could be just my imagination because I haven't really driven the car much over the last year...

So, quick update here - Car failed TÜV due to a bunch of things:
So, I have the papers for the braided brake lines, so that is already sorted - The last TÜV they never bothered to ask so I didn't think I would need them this time ... But yeah, whatever. Different TÜV man different TÜV result. Anyway, problem solved already.

The oil leaks! They returned after two years of being fine... I turned to my old friend: (I also gave the bottom of the engine a good wipe down and used some brake cleaner on the weekend) 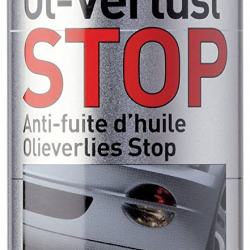 The upper ball joints - They were I.L. Motorsport and were brand new and installed 2 and a bit years ago with all the suspension work ... Not only were the boots split on both, they both feel totally grindy and awful already ... These will be replaced, I am not 100% sure what I will do here, either aftermarket or original ... Both are an option. But, for now, I just got the boot replacement kit for both, €13 or so - Will get it through inspection! 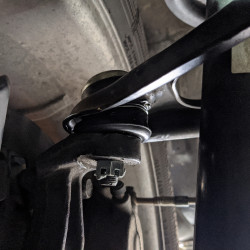 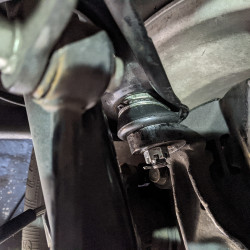 The rear suspension! I was expecting this to be pretty major - Got the car up on the lift gave it a good tug and everything moved ... wtf? checked the left side, there was also a bit of play ... ... I put my finger on one of the nuts and realised it was just finger tight ... wtf? ... So Beni and I went through and checked all of the bolts and found there was quite a few that were no longer tight! After tweaking all the bolts, everything was solid and felt like new again!

It was not mentioned in TÜV but I found that one of the steering arm boots was completely split in two - I decided to replace both of them - Not cheap, but the OEM ones will last for 20 years easily - So, done: 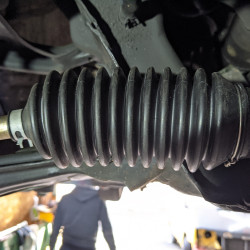 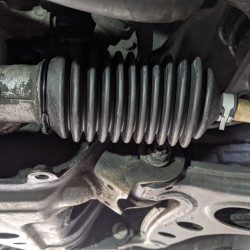 Additionally, when jacking the car ... A bit of flex and we found a nice hole - This was known about and will get addressed along with a bunch of other stuff in 2021, but for now it just needs a quick fix so the TÜV guy doesn't notice: 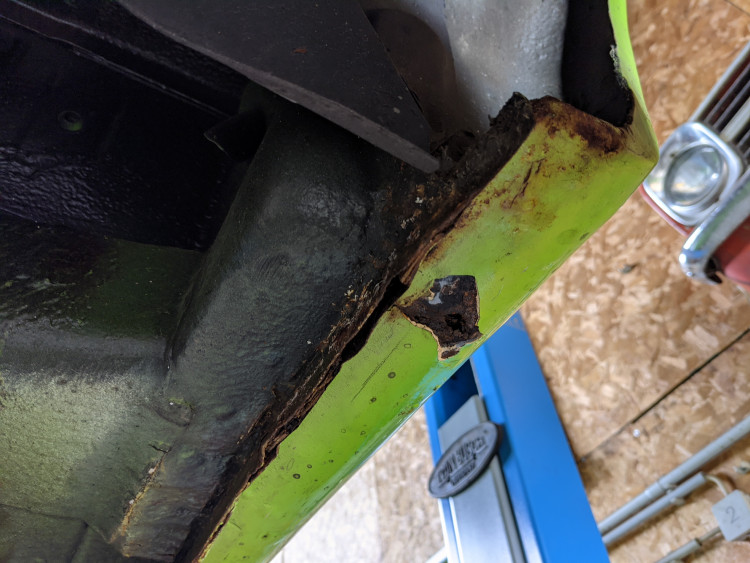 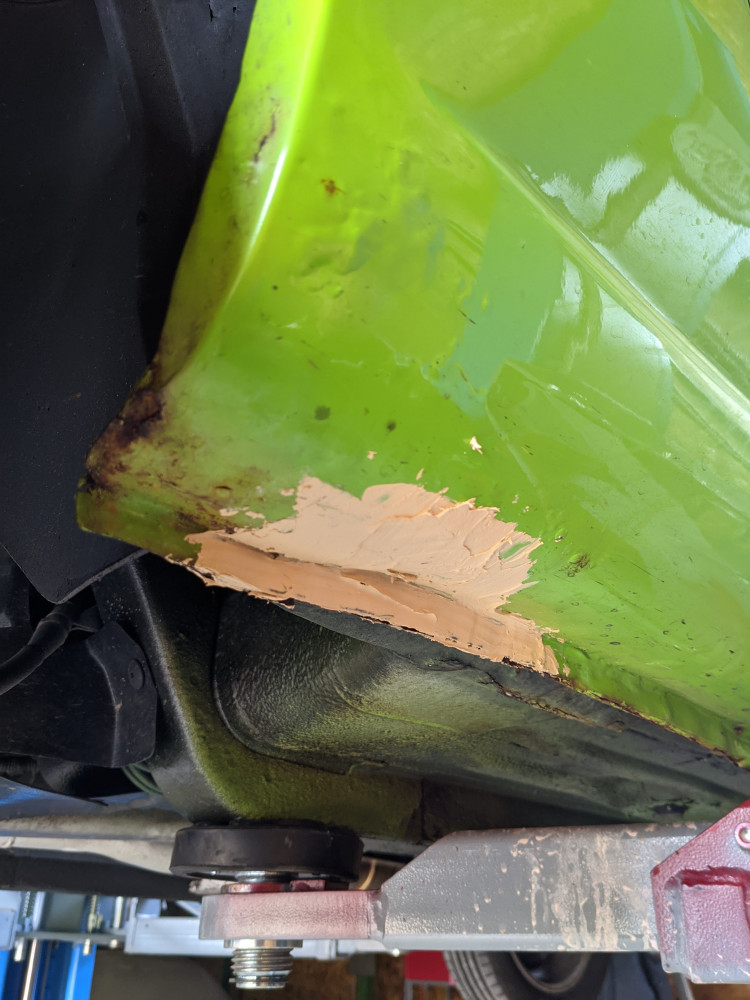 I will chuck some green paint over that, it's already been sanded down.

I have it booked in for this Wednesday ... Let's hope and cross our fingers!

So, here is what was left to paint: 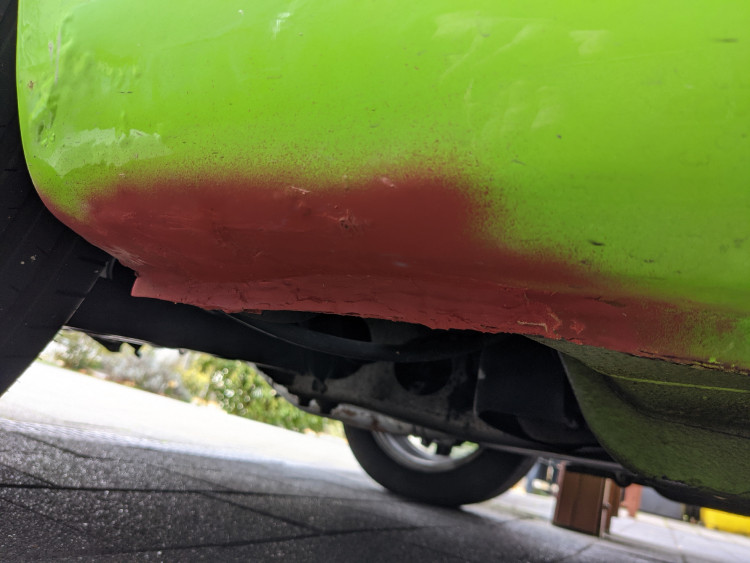 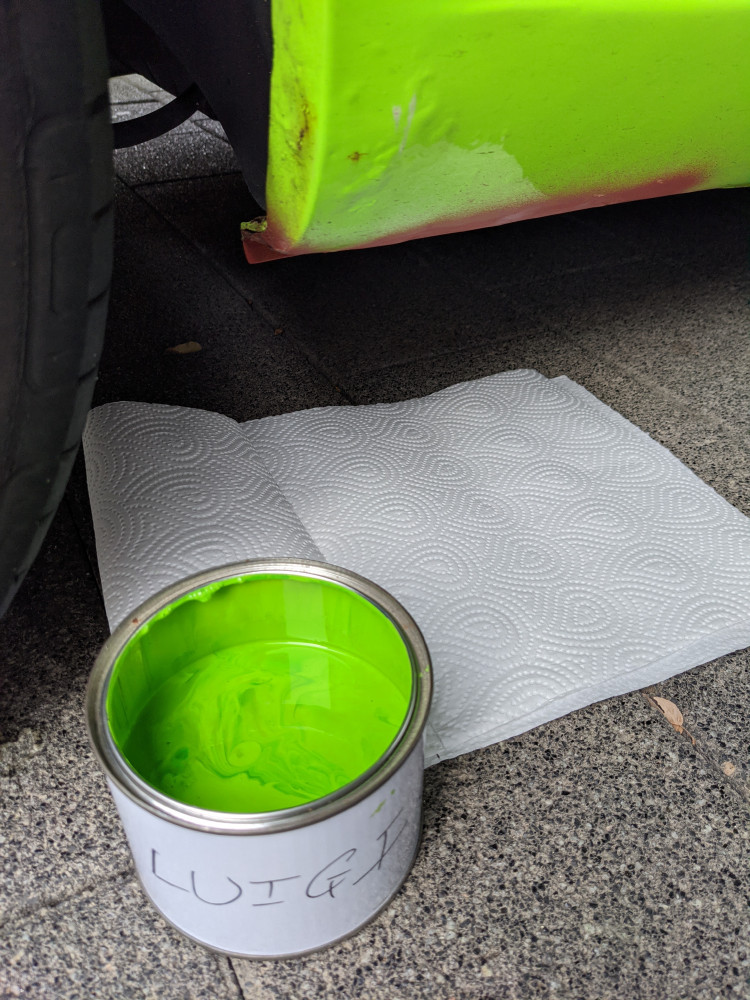 I know, I dislike it too - But a brush was my only option... At least just to make it less noticeable... 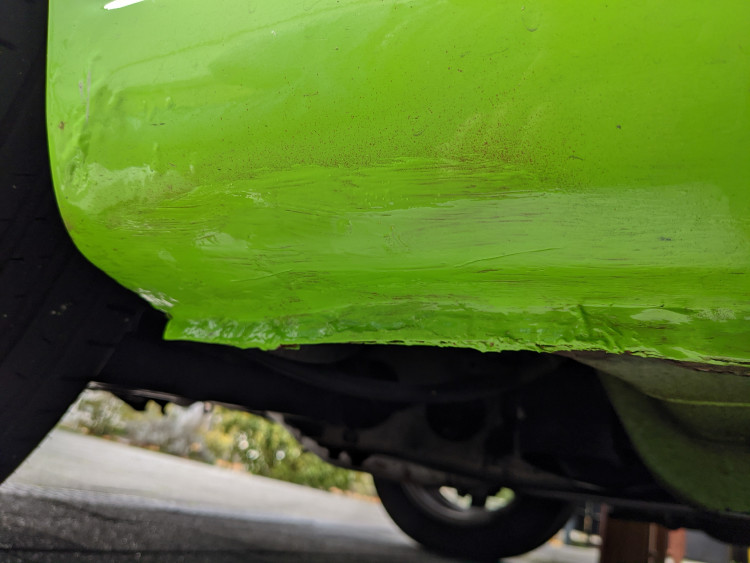 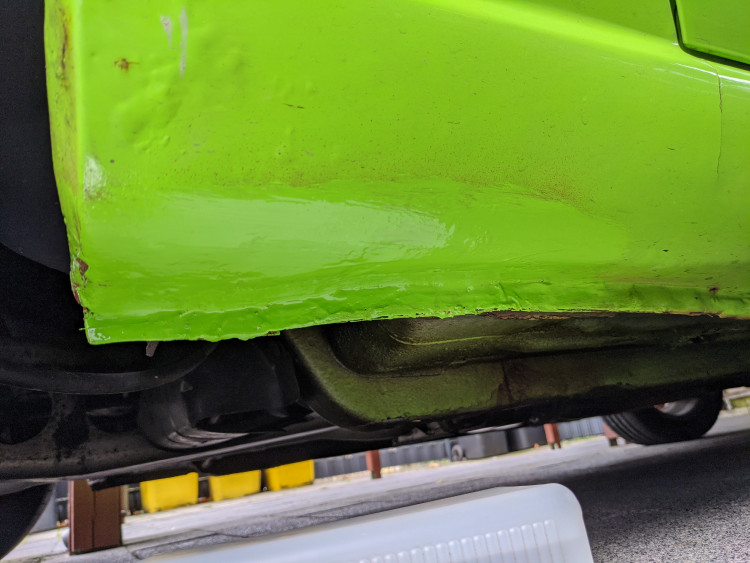 After this I jacked up the car and cleaned all the oil off the underside again ... Seems like there was quite a bit coming from the front crank seal which I replaced (I have never had much luck replacing them ... Even with the installation tools... Anyway, today I took it to TÜV: 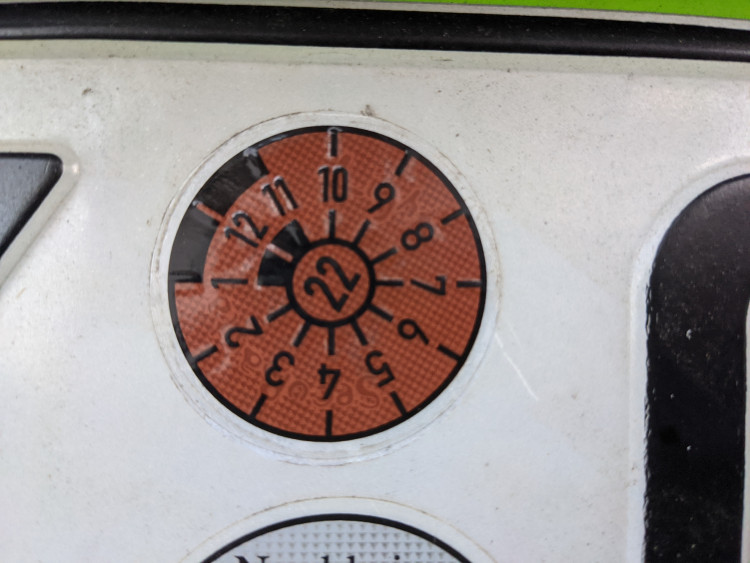 This car will have a special place in my heart forever, being the car of my first (and so far only) ring lap, as a passenger.
- Alright you Primitive Screwheads, listen up! You see this? This... is my BOOMSTICK!

RdKetchup said:
This car will have a special place in my heart forever, being the car of my first (and so far only) ring lap, as a passenger.
Click to expand...

There will be more where that came from!