The local, nearest cleaners would charge me something like 25 eur for properly cleaning the red carpet. Funnily enough, that includes taking it to DaBoomtown by lorry, washing it there and bringing it back :lol: These arrived today. Excellent condition and very nicely cleaned by the seller.

Looking good, it's turning into quite a project car, it can just get more awesome! I'm fighting the urge to sell my bike and get a small hot hatch, got a 106 Rallye in my sights, since there are no interesting 205s available

Yeah! I even went to the MOT centre and asked if they could prod at it and tell me what exactly is loose and worn in the front suspension. I want it to feel a lot less like 250 000 km.

Red seat belts ftw! And carpets too! It's going to be 205 RS

It's a weird world when you get excited about standard equipment.

That means you don't need to add anything unnecessary Here's the red carpet. It needs some more cleaning, but it's not a mess. Might have it professionally done.
Click to expand... Is it cleaner? It certainly feels like it. A number of stains have gone, some have stayed, and the attached note says not all stains could be removed without damaging the fabric.

I will start removing the seats, the center console and the old carpet when I have either the Polo or the Mi16 in daily service. I got of easy and managed to reseal mine with just some cleaning and silicone spray.

As I've been driving the Polo recently, the 205 has just sat at the auto shop's lot. But I figured I'd rather take the 205 back into service, as it's a lot more reliable. That meant I had to go retrieve it in super freezing cold. It gets to sleep in a warm garage for the coming night.

The only question remaining: "Where are the real "deal with it" shades?" How long has thing sat still? I drove it in the spring, then parked it as I started driving the MX-5 daily. Neglected to inspect it as the Polo and 405 became more needy, so I just declared it off the road and let it sit. Felt bad about it today, so I drove over, fired the 205 up first try and drove across the street to the MOT station. I did clear the snow a little and warm up the engine, but... Emissions are high, partially due to cold engine and old gas, but there's probably a need for a little tune-up too. A clunking from the front end was found out to be caused by an inner tie rod end, there are a bunch of lighting issues, the backbox flange is leaking and... the driver seat is rocking too much :lol:

I will probably have the amish shop sort out the tie rod and get the emissions straight, and the driver seat needs to come out anyway so it can receive new old cloth. Will just try to trim down the demerit list as three are fine

To prevent the car just falling over the edge of existence, I've decided it's time to get it spruced up a bit. I ordered new bolsters for the seats and will have the driver side re-done with the spare cloth I still have. That should take care of the rocking driver seat anyway. Local upholstery shop quoted 60-80 eur per seat, albeit unseen.

Great to see progress on this! I understand it's easily left a bit forgotten in your fleet, but it's sill a great car. Hopefully you get new MOT soon. I went to wake the 205 up, and I was happy to see no-one had messed with it. I swapped on the summer tires, will probably just throw the winter set away as it's completely useless. I jump started the Peugeot with a little help from the Polo, and while it started right up, the battery didn't hold any charge due to having been empty for so long. I picked another one up for cheap, and a jet wash tidied up the forgotten appearance a lot, though it needs a buffing. I also went and got some transfer plates for it so I could drive it around and get some fuel for it, and it seems like a fresh half tank of 98 already helped it run a lot better, with none of the stumbling it did earlier. The idle is now at 1000-1500, though, and doesn't come down below that. But man, does it go great. It feels it has so much more life force in it than the Polo, it's nervous, darty, jumpy, it wants to GO GO GO! Everything around it is somehow holding it back, and it wants to spend its life soaring to 6000rpm at every possible chance. I do need to get it through MOT, I do need to hold onto it. It is fantastic.

Fantastic! I really hope to see next update before 2019! :lol:

Sure, with plenty of time to spare! 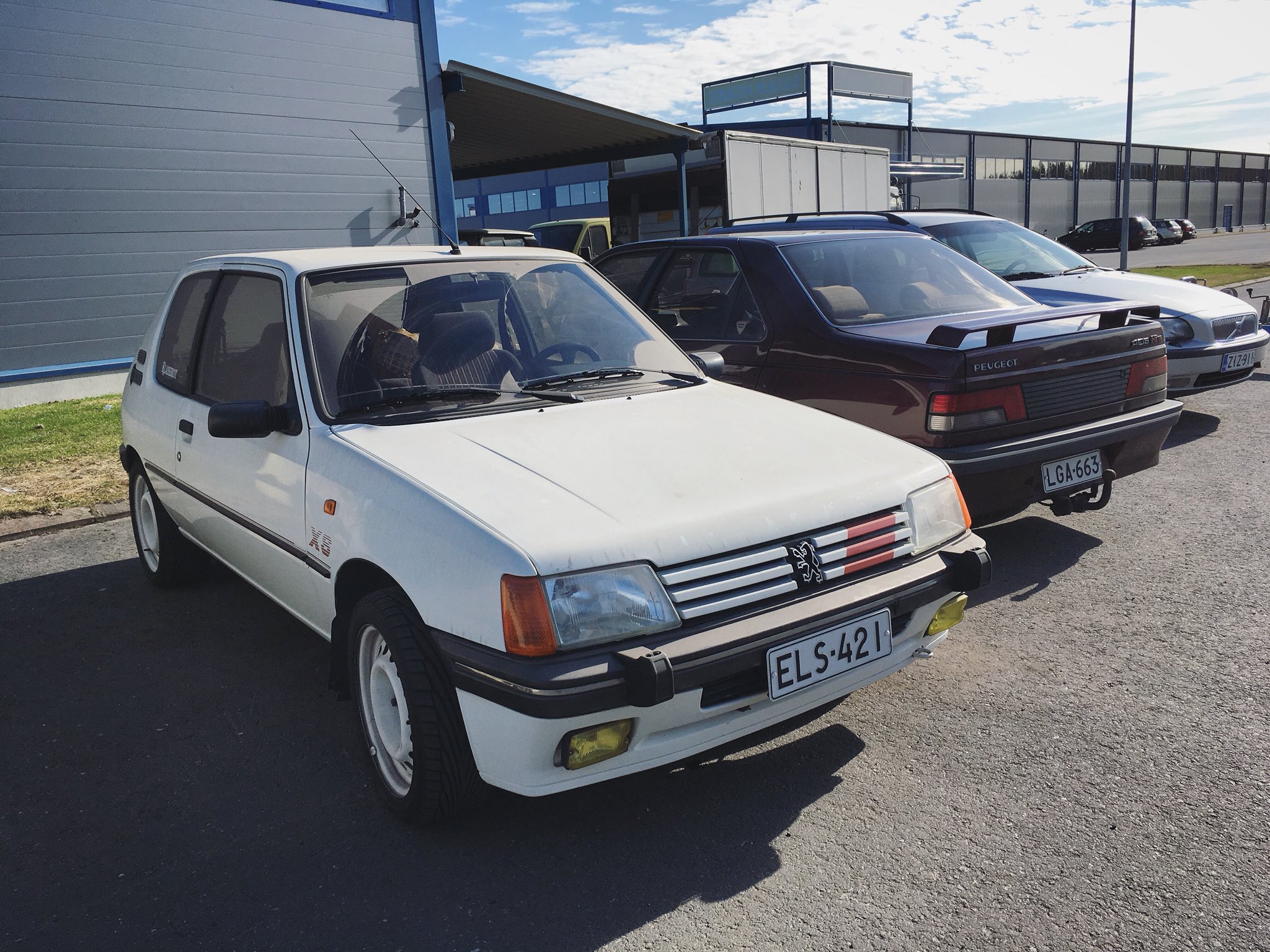 I drove to the car today and hooked it up to a battery tender, and juiced it up. It started eagerly with new electricity running in its veins, and I moved it to a repair shop which will replace the track rods and the muffler. After I swapped the windscreen washer pump, I realized I could still ask the shop next door to check the emissions. With June 2017 fuel still in the tank, I gave the car some proper gas and let it warm up, and the emissions dropped down to a passable level! Now when the earlier mentioned items are swapped and I change a couple of bulbs, I can realistically get it through inspection – as long as no new significant issues have surfaced. But at the moment only the wooden-feeling brakes really make me doubt it, and I also asked the shop to have a look at them. There's also an oil leak from somewhere, but I have a new oil pan gasket if it's that.