I'm trying to get this in reliable driving condition again as fast as possible, I'm still waiting on parts to replace the rad. In addition I'm going to be redoing every belt and pulley on the front of the motor, the water pump and clean the lifters.

I also replaced the plugs.

The car ran fine before all this, but I wanted to establish a solid baseline for the car, so I can know exactly where a lot of things sit on it. Since the car is so cheap for parts and so easy to work on, it's different than a car like the STI.

I'm pretty excited for it and have quite a few upgrades planned once I have the sti sold. (Mainly coilovers, ARBs, new bushings in all the somewhat easy places, braided brake lines and frame braces)

Here are some pictures from today showing some of the work I've done. Pictures are from newest to oldest.


Car in the garage

Hard to see (and get to) new oil filter and the horn remounted (though turned to get to oil filter, since the wheels were not off at the time)

Shot of the transmission after replacing the oil

Last brake I did, and all the old brake fluid in the jug

Second last brake I did

Picture of the rear of the car, I have extensively cleaned and polished the car

Interoir back together after doing the oil in the shifter turret

Another picture of the brakes/ suspension, you can see some brake fluid I spilled on the ground

Picture of the current battery in the car (I still need to get a bracket for it and replace it with a gel battery that won't rust the trunk like this one did)
I plan on tackling this rust as soon as I have a new battery and bracket (going to grind all the rust off, prime it and repaint it) 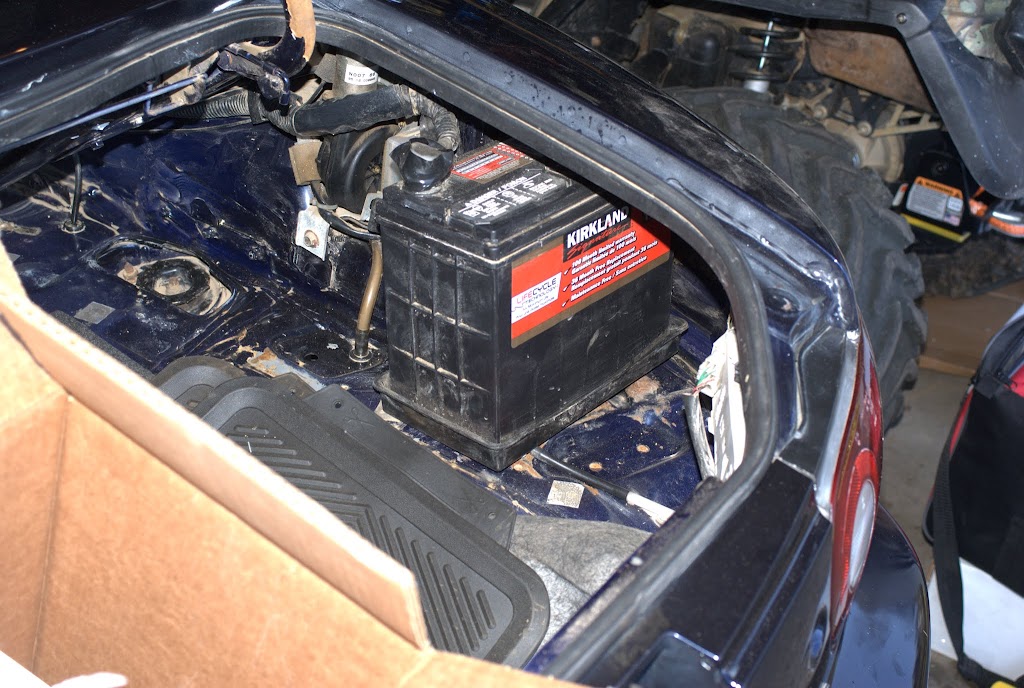 Shot of one of the brakes after being done (as you can see I also need to powder coat the control arms and get some coilovers!)

Another picture of the underside of the car

Collection of different used oil (motor oil and filter in one, diff and trans oil in jug)

Newer Fluid in Reservoir while bleeding the brakes

Old Brake Fluid in the reservoir

Few more updates, this week I hope to clean out the lifters on the engine and replace the water pump, after I do that I can put the cams back in and put all the belts back on. I've been procrastinating quite a bit on this and I'm going to try and pick up the pace a little bit.

All of these is preventative maintainence, I could easily have not replaced the timing belt, but I opted know exactly the condition of engine rather than not know the condition of the top end of the motor. 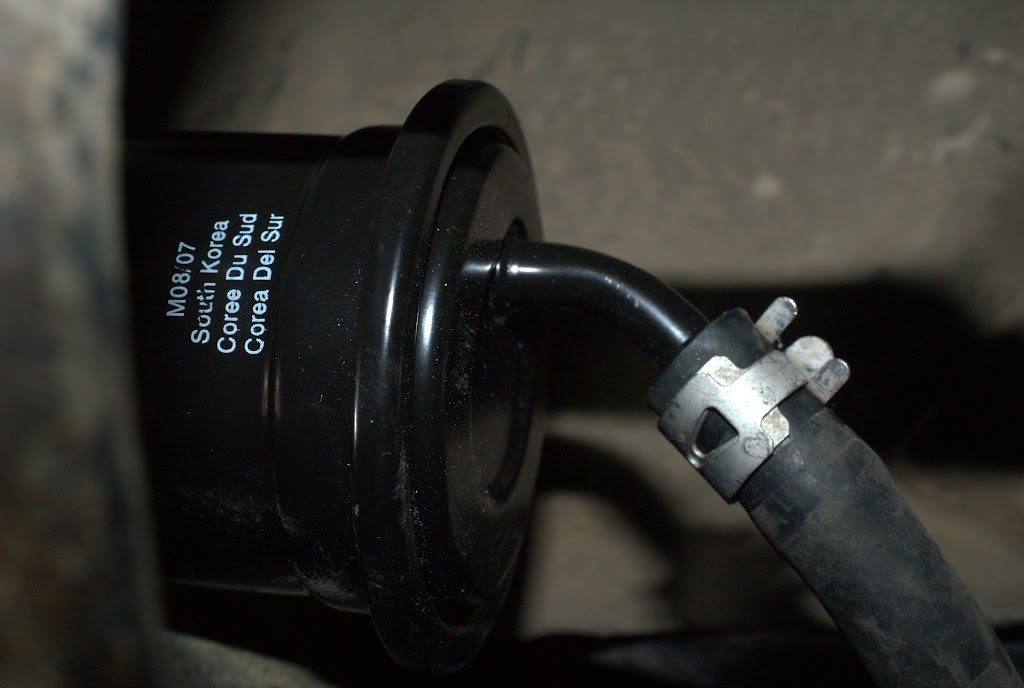 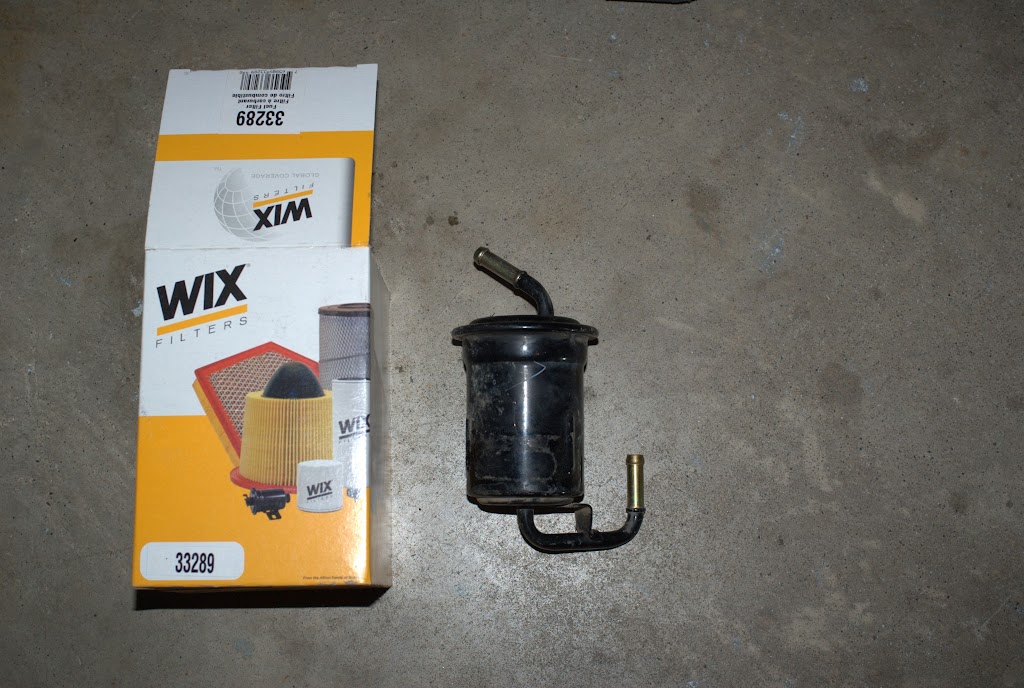 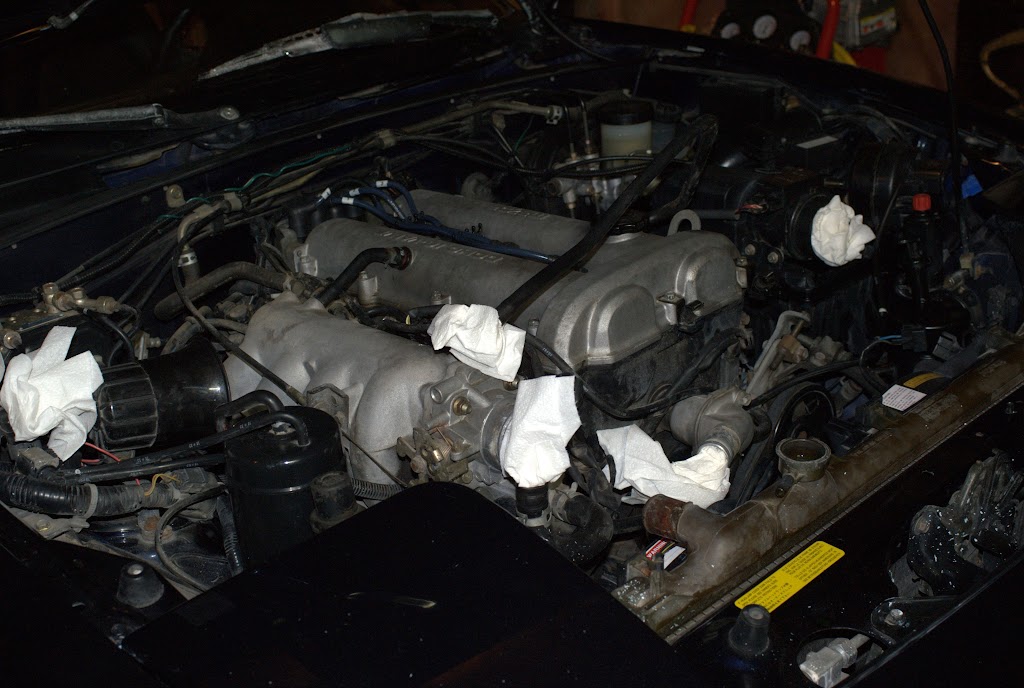 Drained Coolant out of rad 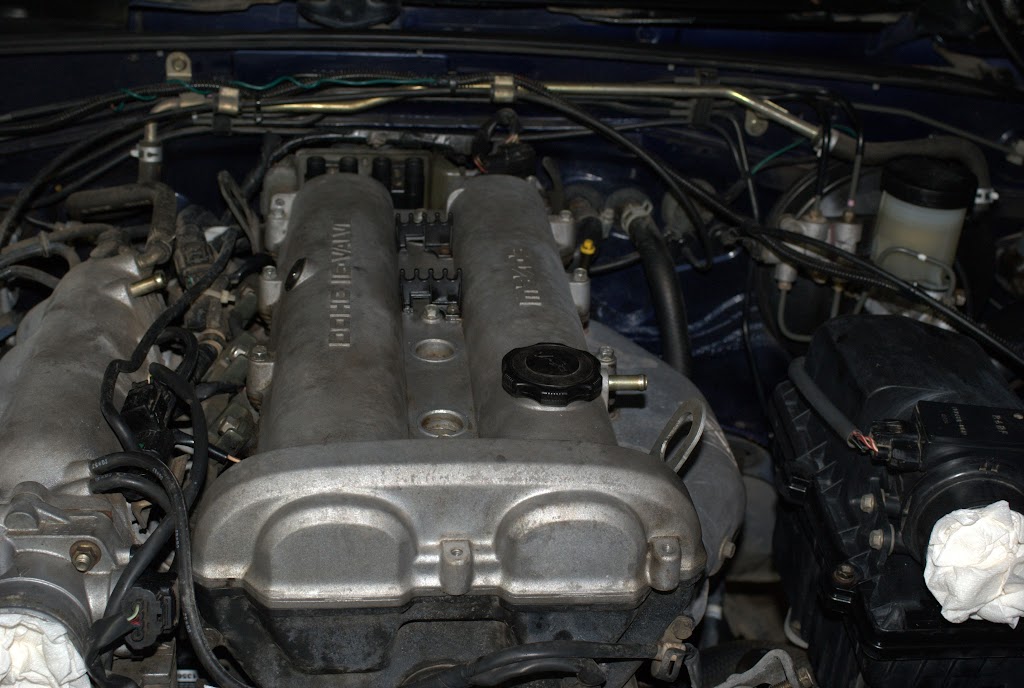 Plugs and wires coming out 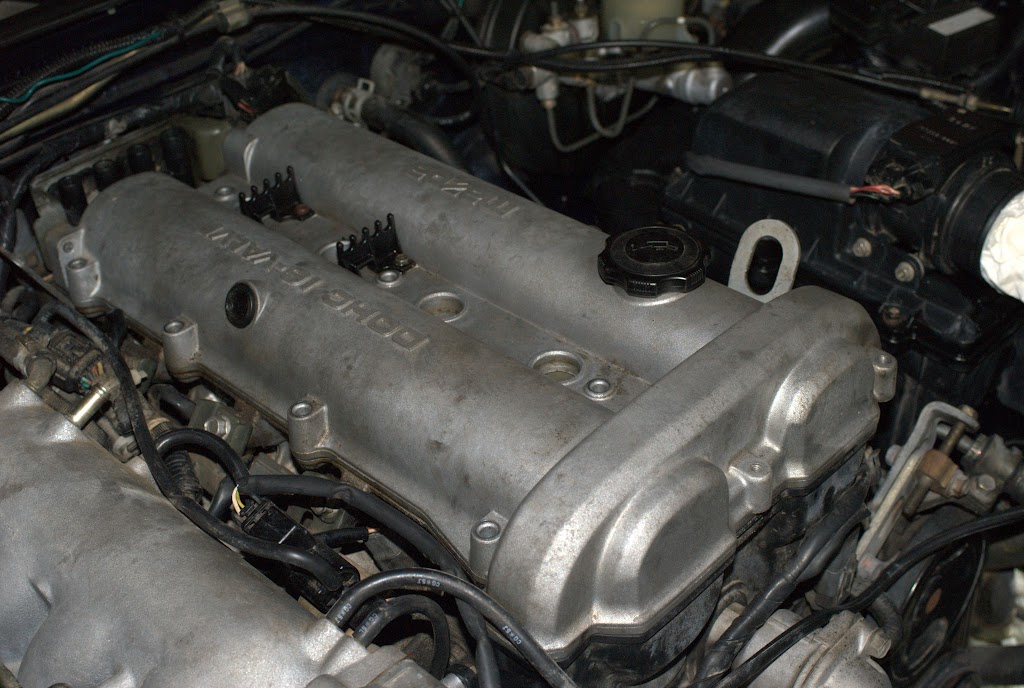 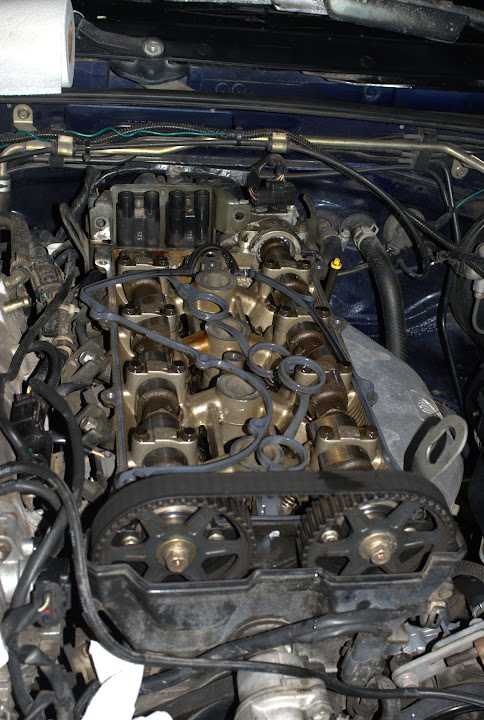 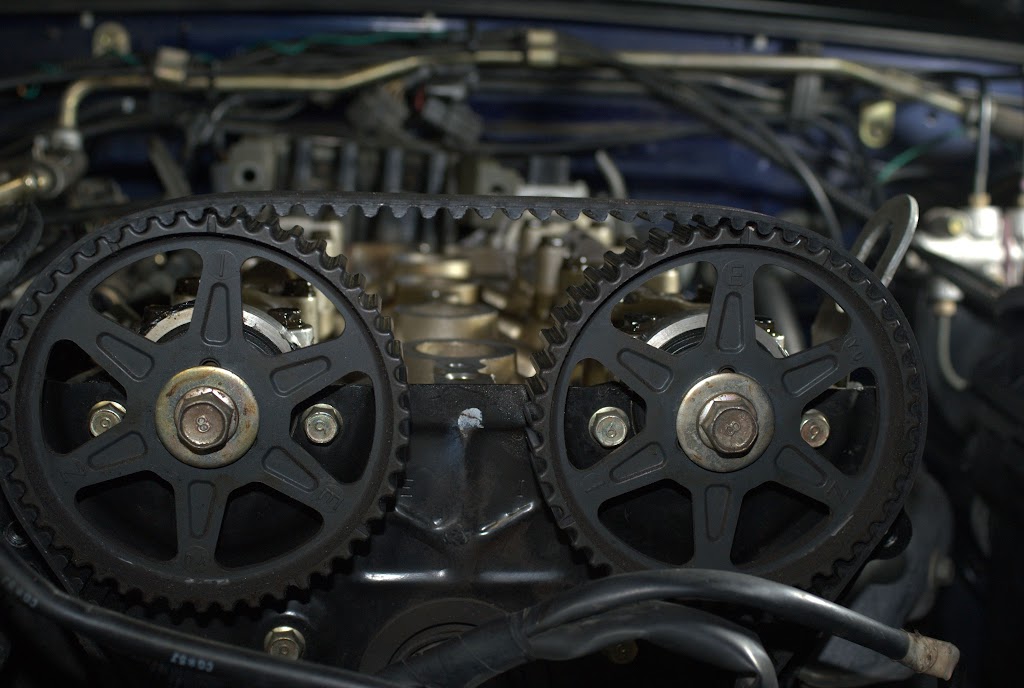 Pictures of timing gears at TDC 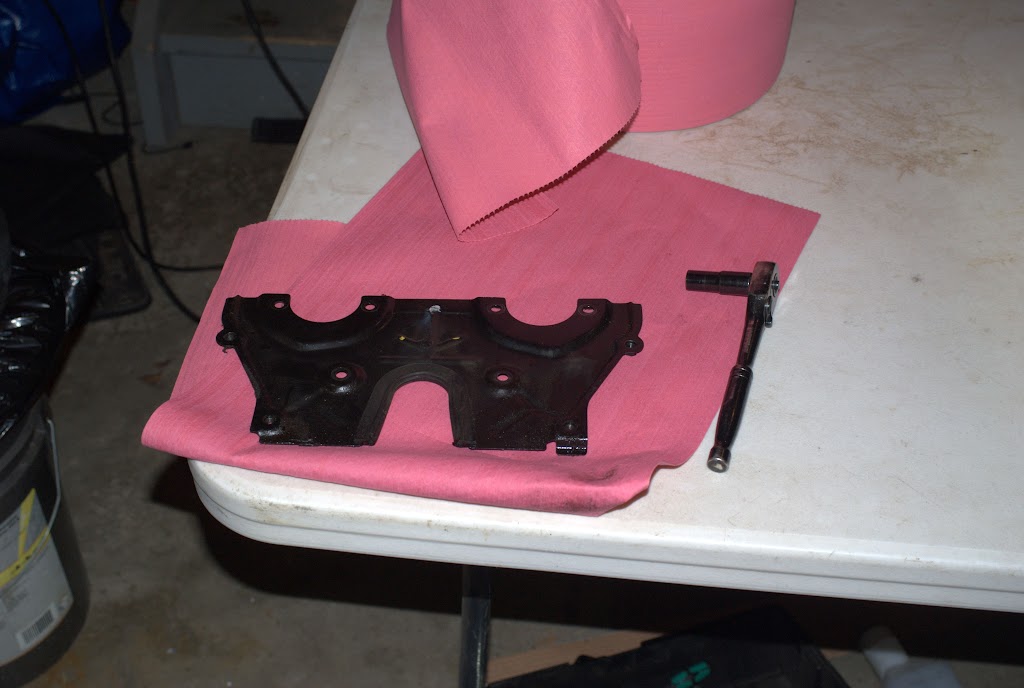 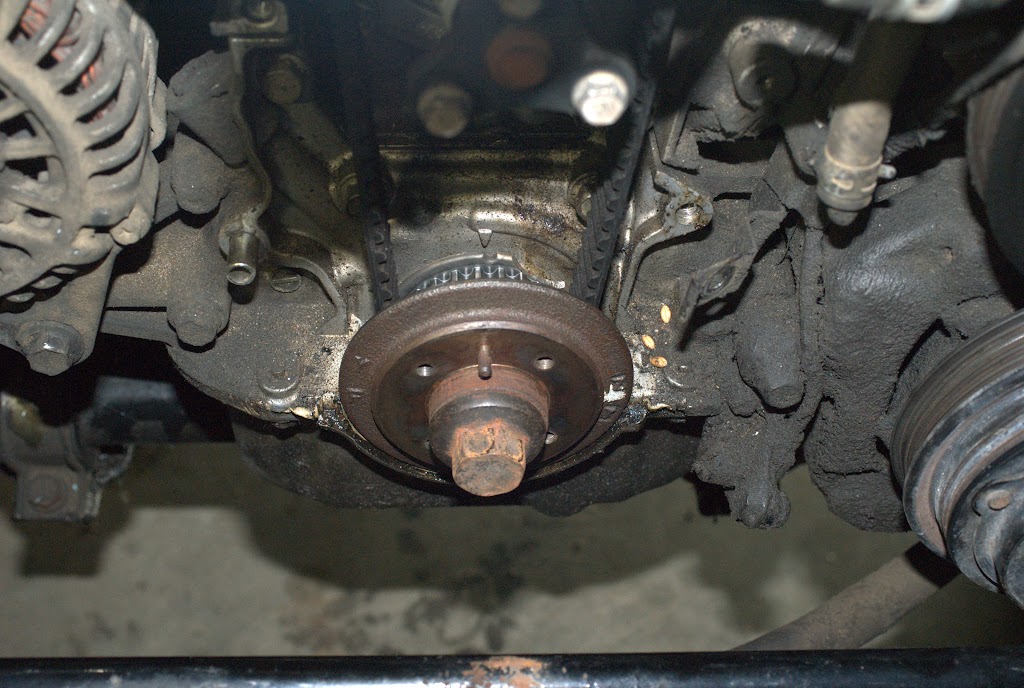 Engine nearish to TDC (before being put to exact TDC) 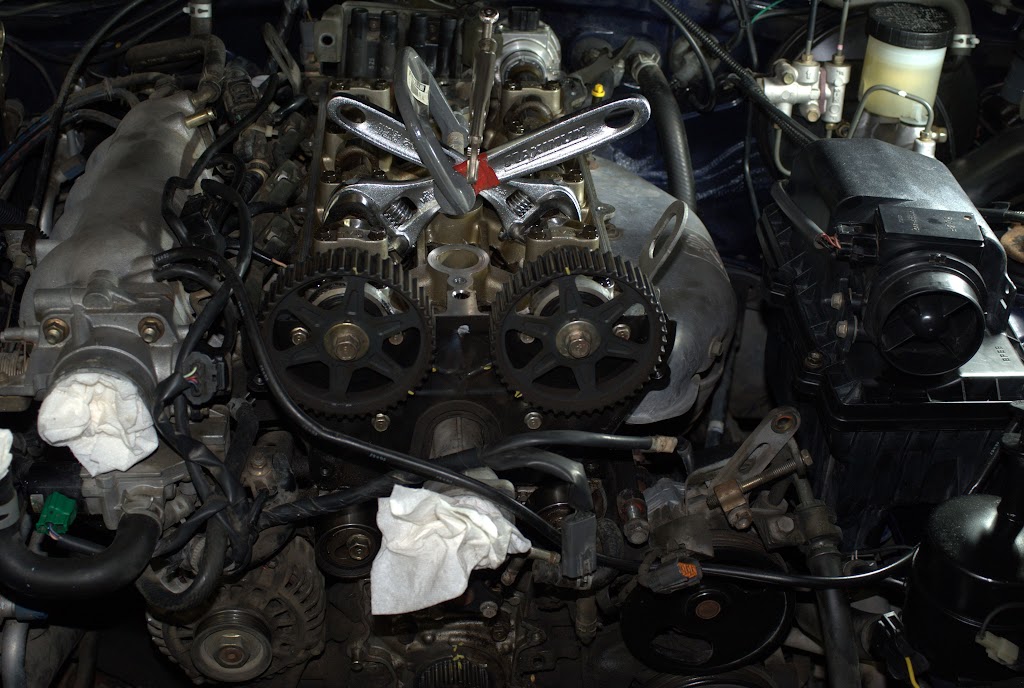 At first I was going to lock the camshafts in place, but then I decided to clean out the lifters so I just took that whole thing off 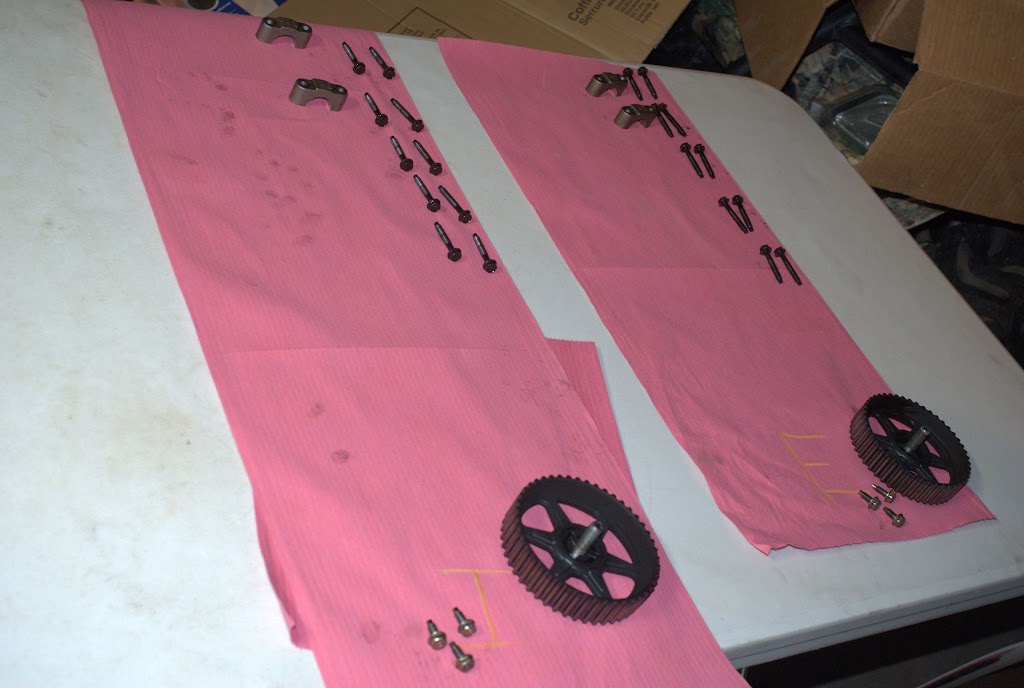 Bolts out of cams and some cam bearings off 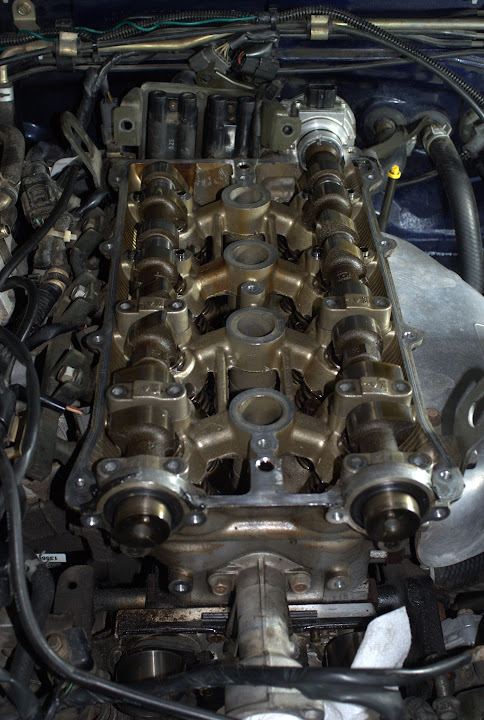 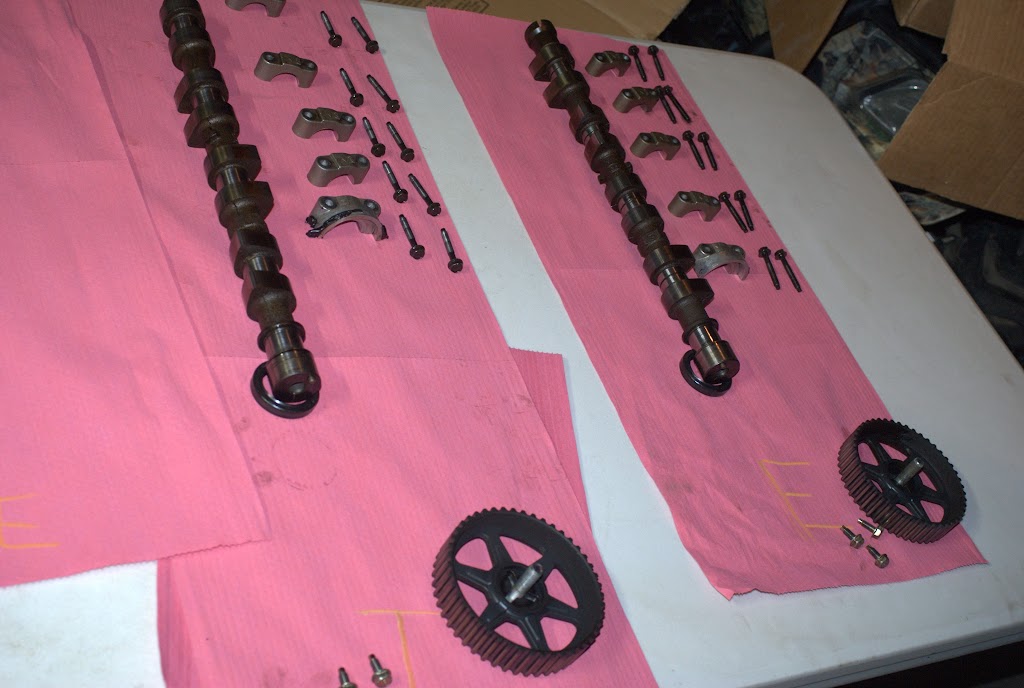 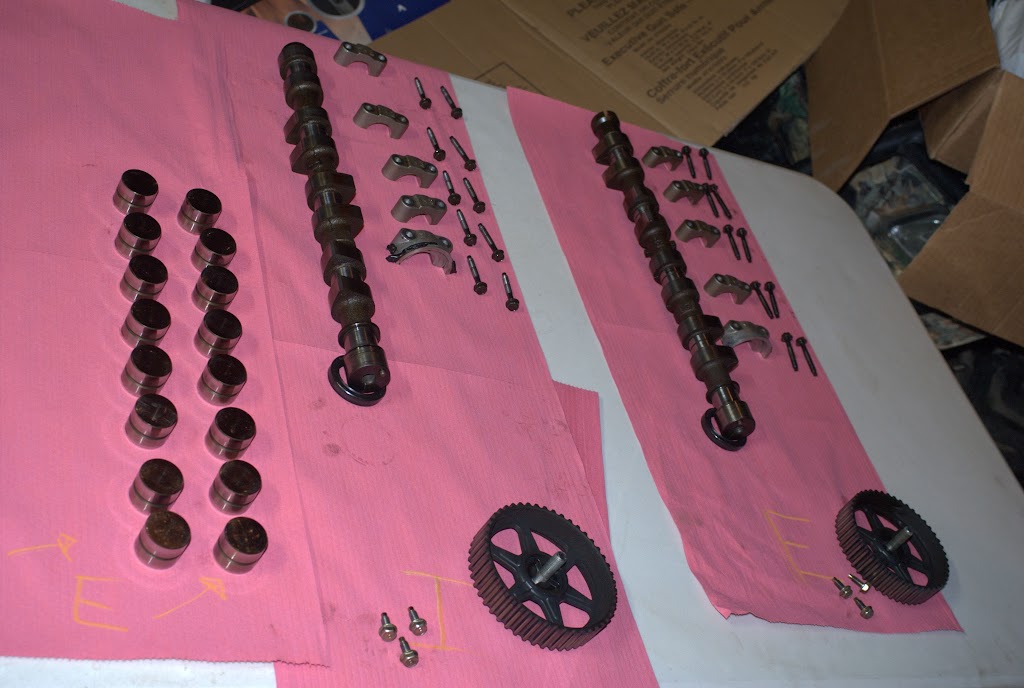 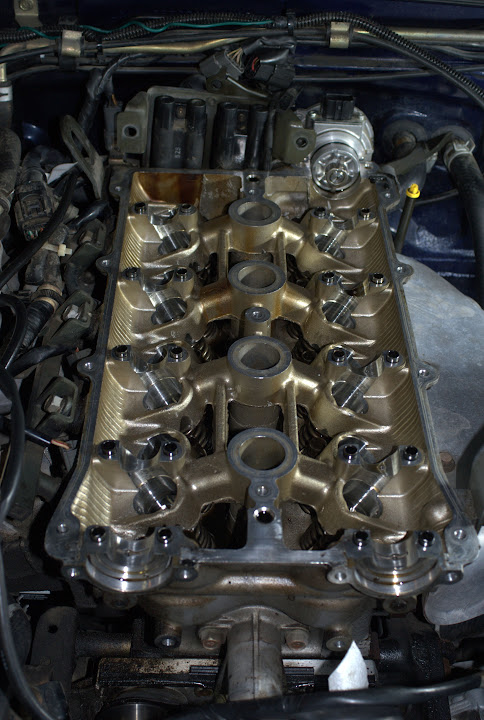 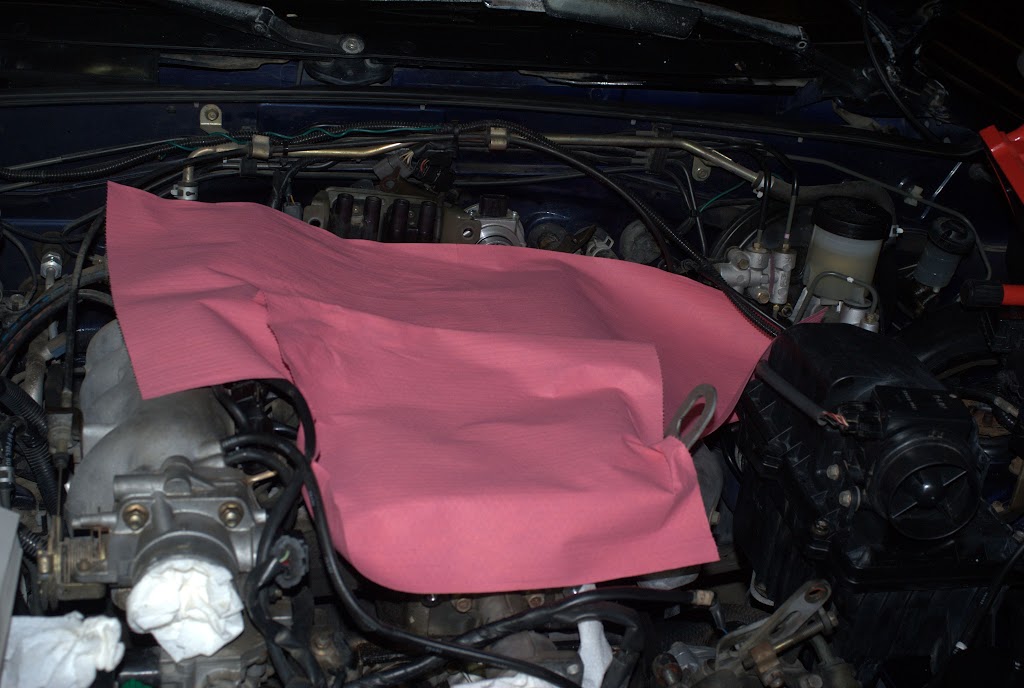 Covering the engine for the night
Last edited: Sep 7, 2015 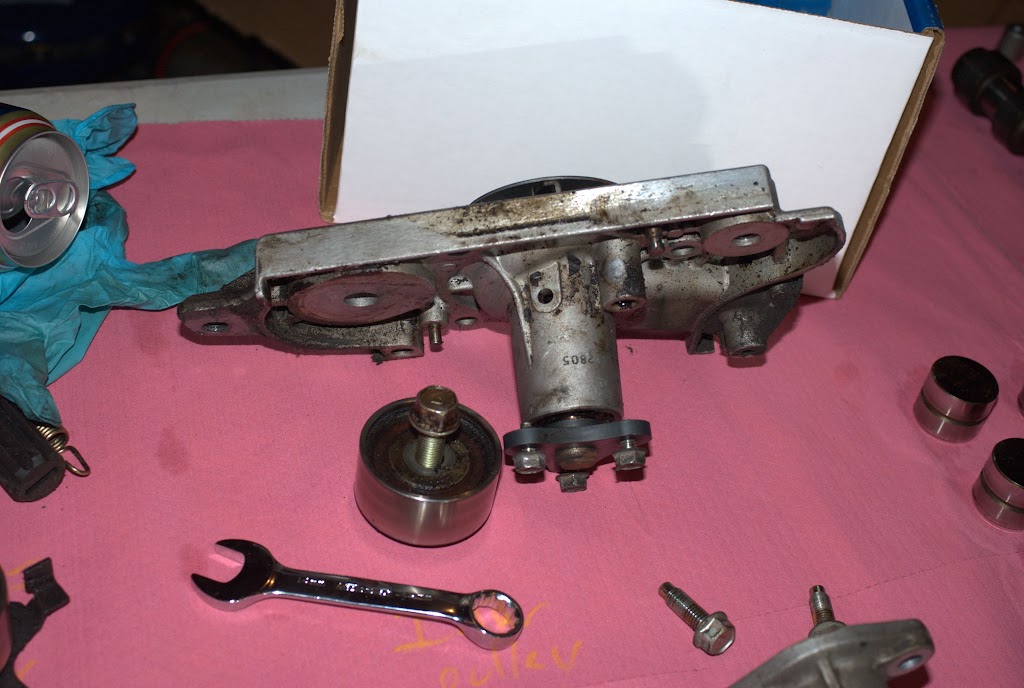 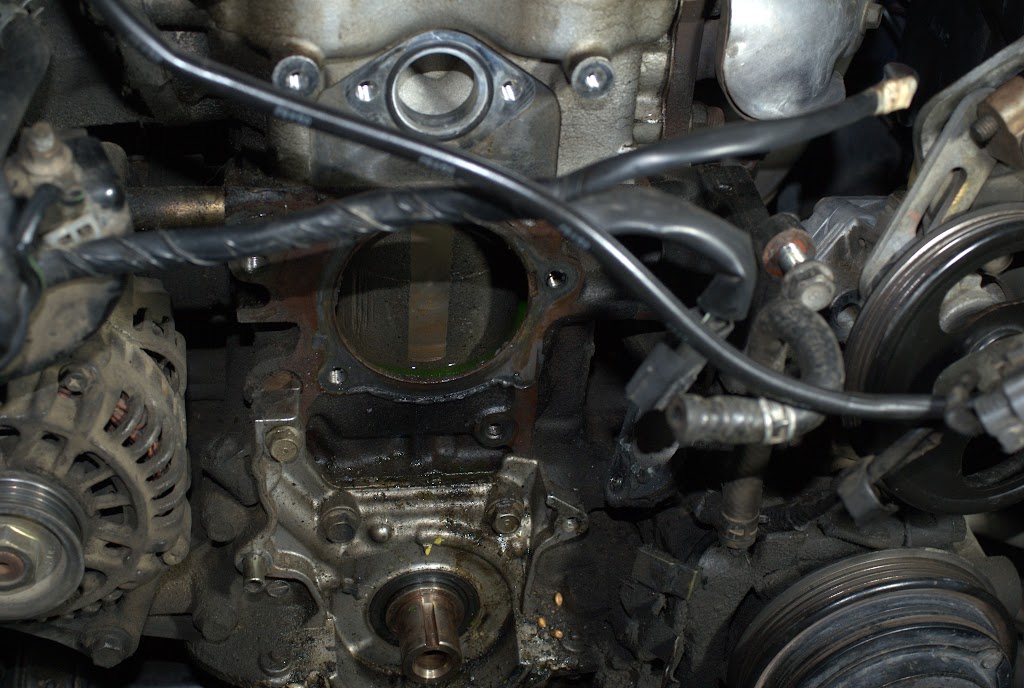 Water Pump out of engine

Madcat noticed my Crank Timing Belt Pulley has a chip in it from the photos, so I pulled it and I''m going to be putting a new one on when it arrives sometime this week. 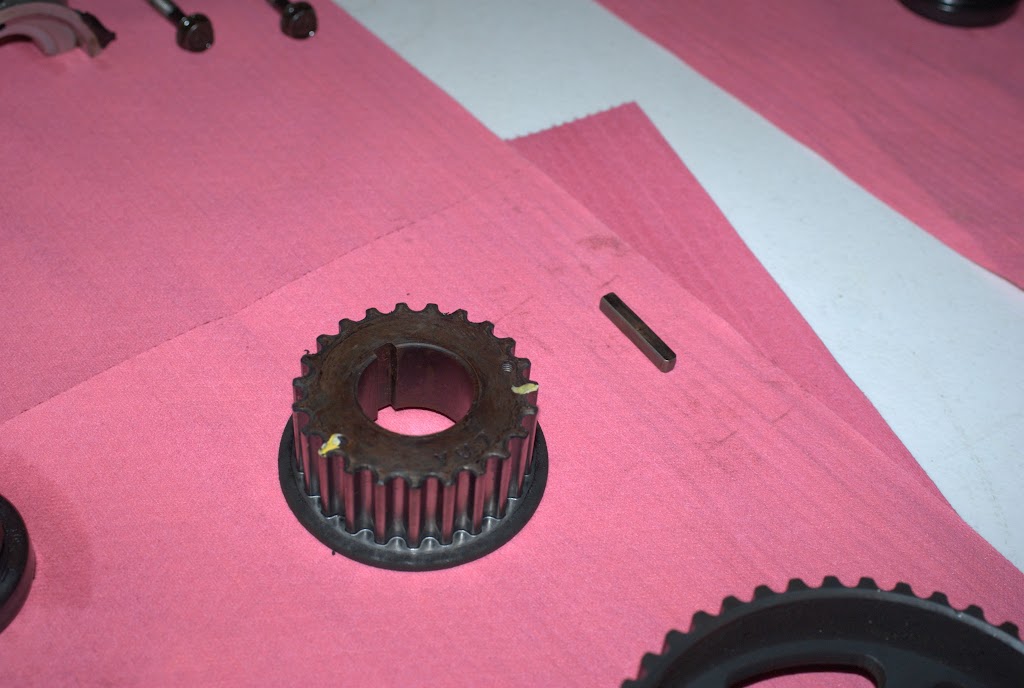 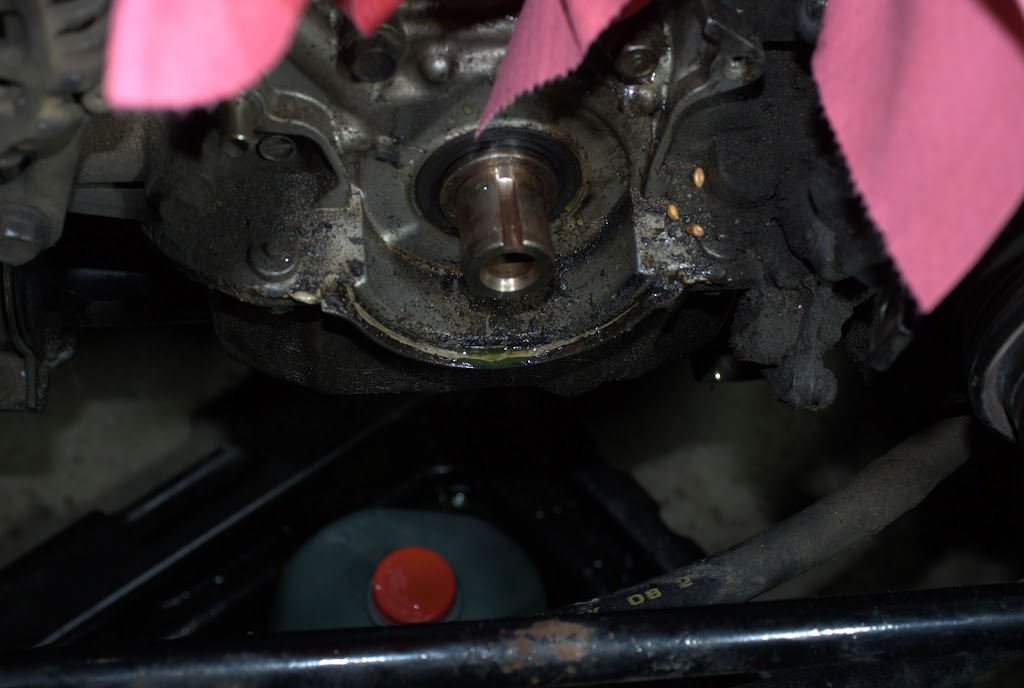 Engine side (Also going to pulling and replacing that seal)

Hopefully I have everything I need to start putting this car back to together. All I have left is to clean the lifters and install the new water pump and I can starting putting her back together.

Nice to see such thorough maintenance there, she ought to run like a top after all that freshening.

Man, I love how the valve covers look on your engine. My NC has tons of plastic crap that makes it look not so pretty.
"Well, that's fine. You waste your money on a Mustang or a Ferrari. The fact is that if you want a sports car, the MX-5 is perfect. Nothing on the road will give you better value. Nothing will give you so much fun. The only reason I'm giving it five stars is because I can't give it 14."
--Jeremy Clarkson on the NC MX-5
You must log in or register to reply here.
Share:
Facebook Twitter Reddit WhatsApp Email Share Link
Top