Awright! We have some Real Winter Usage. I had a 900km roundtrip to do this weekend and decided to take the Hyundai for the journey instead of the Volvo which waits for inspection re-show. On the first 450km half temps dropped to -10C at coldest, but remained at -7C to -8C for the most part. Result: 15.4kWh/100km according to the car. I kept the car in Eco mode just in case, but used the heat pump normally to keep cabin temps cushy at 22C. Smooth and effortless with prioritizing kWh based rapid charging pricing, did four 100km-ish stints.

Fast forward to today and .. temps dropped under -20C and we saw -27C at the coldest! Proper freezing. The same drive in the other direction meant consumption rose to 19.6kWh/100km and we got home with 11% showing, which the car said would only be good for 27km. In other words, a Siberian cold will drop the range to 200ish km from the EPA rated 270km, but a slight freeze will still retain a 240km range. I can work with that.

Some notes: I could only really get the car to charge at 34kW at its fastest, which is not great but perfectly liveable when you pay per kWh and not per minute. Rapid charging usually started at 27kW and dropped back to that soon enough. But I also had to use some minute priced chargers on the route, which is less than ideal at least as a principle, with this particular model. I also didn't pay attention to snow getting inside my own Type 2 cable, and later wondered why I couldn't get the car to charge at a small town's sole 22kW charger. Did eventually realize the cable had a centimeter's worth of ice in the socket and brought it inside to thaw.

I also accumulated the first door ding due to some careless person charging a bit too close for comfort on Friday. Only noticed this the following day, but it is what it is. Dunno if I have to use my insurance's parking cover for PDR or just return the car with the dent in the door. 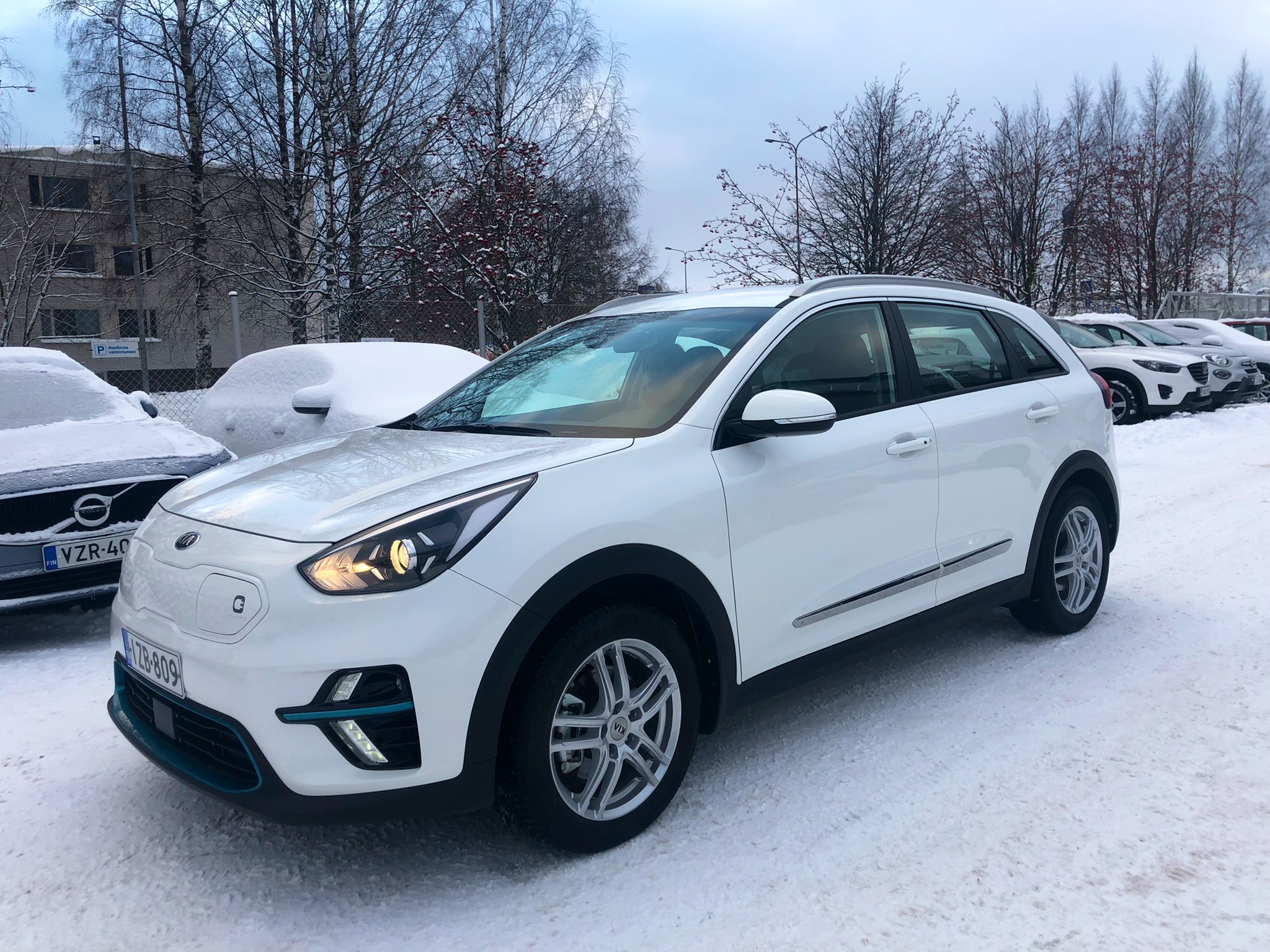 Like I said earlier in the Volvo thread, I posted it up for sale after the car successfully passed MOT. In a week or so I got a bunch of calls where the person suddenly realized the car was RHD and backed out of the discussion. Around the same time, it became apparent that my GF much preferred taking my leased EV to the shops instead of anything fossil fuel powered. I checked a bunch of similar private lease deals, sent an email about a Peugeot e-208 and immediately afterwards noticed this 39kWh Niro EV with dealer demo miles on the clock.

I played around with the sliders and noticed that a year's deal with expected yearly kms was really cheap. This was based on the dealer placing a significant discount on a mediocrely specced, small-battery demo car with the old KIA logos, especially with the new Niro around the corner, compared to full sticker price. I sent them a detailed trade-in suggestion about either the Volvo or the Demio, and within the hour a guy called me back. I roughly made back what I paid for the Volvo and its import taxes two years and 50,000 km ago, and there's a very reasonable monthly sum to pay now for a year. Plus, I have a guaranteed buy-back price on paper.

So, this thing has:

The car juices up from our five-pin CEE socket pretty damn fast compared to the Ioniq. It drives real well, smoothly and the studless tires certainly feel grippy, tire noise is acceptable. I think it feels a little more substantial than the Ioniq but it's specced worse but it charges faster when charging slow.

Since this is just a short-term deal and I'll probably hand it over a year from now, it's very much someone else's problem already and doesn't merit a thread of its own. But it'll be interesting to see if we can pull off 2022 with mainly only EV driving.

Noice! I never understood the weird placement of the chargeport in these though, the front is super dirty….

Also 39kwh seems small for a car this size,no? Especially in buttfreeze weather? Depends on whether you do longer trips or not

It is smallish but the car should do about the same range as the Ioniq, minus the heat pump benefits of the Hyundai. The faster 3-phase charging does help, even if actual fast charging with this is similarly slow. It'll do ~10k a year compared to the Hyundai's 25k cap, doing second car duty from town to town here in the country, so the battery will rarely be really low.

That would make me sad.
Moths are just goth butterflies.​

Hey, with a fresh MOT it's worth money!

I also updated the thread headline to reflect the fact there are two now.

The spec of the Niro LX is also lowly/old enough that it doesn't yet get the Kia Connect remote app compability, which is a bit of a minus tbh for a car that's as sporadically used as this will be. It would be nice to be able to put the heater on full blast at short notice, instead of having to go to the car to set the estimated departure time for pre-heat. In turn, I pretty much know when I'll be needing the Ioniq, so I could feasibly run it with just the Mon-Tue-Wed morning and afternoon preheats in the dash. But pre-heating is at least available and the Niro thaws its windows quickly, so there's little need for window scraping anyway.

Someone on the road behind behind this house has a Niro, I was just reading when I heard the 'bong, bong, bong, bong' from it. Through closed double-glazed windows. Never understood why it has to be so loud.

Matt2000 said:
Someone on the road behind behind this house has a Niro, I was just reading when I heard the 'bong, bong, bong, bong' from it. Through closed double-glazed windows. Never understood why it has to be so loud.

I bet there's a market for some kind of OBD dongle that turns off all sorts of mandated and undesired things after startup/powerup. Lane keep assist, bonging, stop/start systems etc. Wonder if it's possible.

Perc said:
I bet there's a market for some kind of OBD dongle that turns off all sorts of mandated and undesired things after startup/powerup. Lane keep assist, bonging, stop/start systems etc. Wonder if it's possible.
Click to expand...

Probably very difficult these days without inside knowledge of the car software.