Got the car out of the service for the drive shaft (had a loaner 58kW ID3 pro business with puny 107kW motor), and here is as follows!

- Drive shaft and tie rod for the right side has been replaced, no clocking sounds appeared anymore.
- They checked the recalls and there was one for aircon, so they checked it and noticed that the pipes were busted and the system had no gas, so they fixed the pipes and refilled with no more leaks.
This was weird since it made cold air in summer, so it m,ust have busted when the air got colder, idk.


Quoting @loose_unit "Did you buy a Tesla?"

i don't know anymore....
<MXM> ZeDestructor, there is no trying to Galantti. You either Galantti or not Galantti.
Motives Of transport:
VW id3

An update bore the end of the year!

As you can see the part that keeps the flap locked had frozen over, so i had to go to underground parking of the 24/7 hypermarket after work to let ot thaw.

The part that prevented the opening is the rotating part of the flap on the car side. 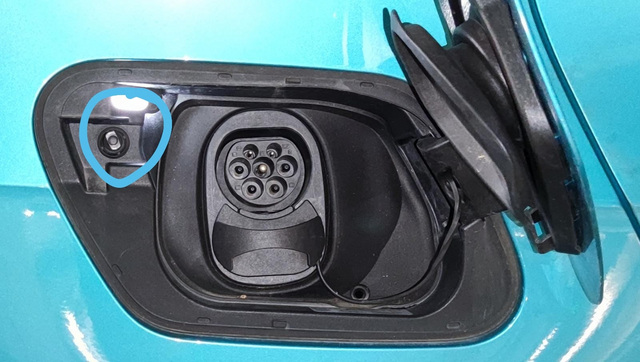 its the same kind of design that was on my A7 so it will prollycause issues in the long term.

And on the 29th i had this nice error message greeting me:

Which meant that i did not have speedo or any other system (apart from esp) showing on the dash or hud.

so i used the tiny speedo in the android auto to see what speed i was doing in the ring roads that had lots of speedcameras!

Will keep you guys and gals posted, even if you don't want to!
<MXM> ZeDestructor, there is no trying to Galantti. You either Galantti or not Galantti.
Motives Of transport:
VW id3

Um....point of note, would this affect the odometer? because I think I have figured a way to sell a brand new ID.3 a couple of years down the line

gaasc said:
Um....point of note, would this affect the odometer? because I think I have figured a way to sell a brand new ID.3 a couple of years down the line
Click to expand...

i like your thinking, but sadly odometer works in the backround (engine control unit, abs unit etc).
<MXM> ZeDestructor, there is no trying to Galantti. You either Galantti or not Galantti.
Motives Of transport:
VW id3

Had the same issue on my eGolf last year. Some hot water followed by a good slap loosened it, but I don’t recommend this for the long term, as you can remove the top panel by accident (leaving you with an ugly looking but still unopening charge port)

So i went to power wash the dirt and grime of the car on saturday after work and when i went to drive to work on sunday morning, well temperatures had dropped to -5c, and i was greeted with this nice amount of error messages (10 in total)! 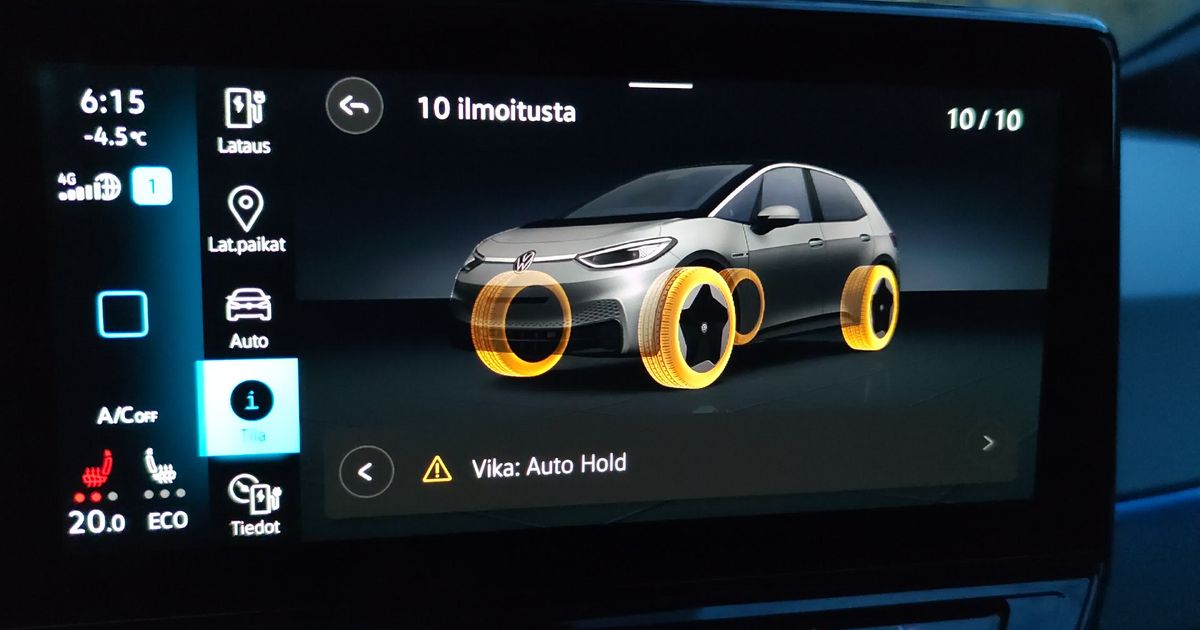 flock of warnings day after carwash when temperatures dropped to -5c

And drove to work without esp. cruise and regen!

(and was fine when i left work later in the day).

Also reserved time to apparently replace both front lights, since they started to gather moisture droplets inside the light: 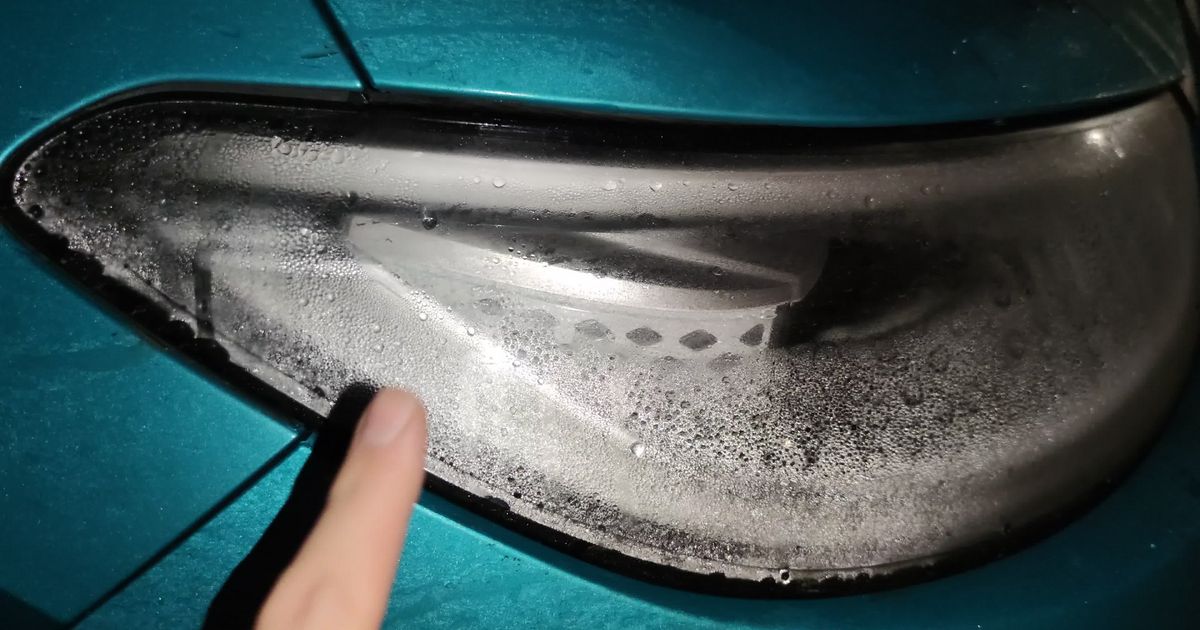 the droplets dried when sun hit them, but i send question to service center and they apparently change them.

Also noticed that one of the plastic sideskirts have started to open up, but it started to do it on the only door i don't open very much.

Yeah, that moisture is a clear warranty issue.
Have you ever noticed that anybody driving slower than you is an idiot, and anyone going faster than you is a maniac?

My goodness Galantti - you sir have the patience of a saint. Hopefully they’ll get you fixed up and it’ll be smooth sailing.


Sent from my iPhone using Tapatalk
"The way I see it a car enthusiast is somebody who is enthusiastic and interested about the motor car in all its various shapes and forms from supercars to East German 2-strokes made of cardboard. Everyone else is merely a car elitist IMO." ~ Captain 70's

Anesthesia said:
Yeah, that moisture is a clear warranty issue.
Click to expand...

Tesla would probably try to tell you that was "within spec" or some bullshit. I have massive issues with fogged up side cameras when it gets really cold and wet and they very clearly told me they wouldn't do shit about that: "just preheat the car at least half an hour in advance to setting off". bloody clowns.

got the light replaced and new left side skirt in warranty replaced!
And the clicking sound is back intermittently.....

need to get some video of it recorded.... oh I do have an recording made in thursday:

anyways, today me and my mom went to do some sightseeing (and delivering flowers to cemetaries) on the east side of Finland and i had this idea of driving on different combos of the aircon/speed.

Well here is the results of 464km driven (with cruise):

Bloody hell. Here in the US I would have made the dealer take it back under the Lemon Laws.

Anesthesia said:
Yeah, that moisture is a clear warranty issue.
Click to expand...

I thought that too since I have the same problem, but apparently it can happen from an impact from a stone or something?
I don't see it on my car (just a crack) but the dealer was sure it was from an external source....

NooDle said:
I thought that too since I have the same problem, but apparently it can happen from an impact from a stone or something?
I don't see it on my car (just a crack) but the dealer was sure it was from an external source....
Click to expand...

It sucks that they would use that excuse. I have a hard time believing that would actually happen that way. At least not based on our tests of how much punishment the "glass" of modern lights can take. But it's often pointless to fight a dealership.
Have you ever noticed that anybody driving slower than you is an idiot, and anyone going faster than you is a maniac?

So had the car for the week long "lets see to get the clicking sound taken away", and had them to do the 2.4 update with new 12V battery to the car as the paperwork suggested to be done.

took them exactly 7 days, since the update was fighting them

also they asked if they could do the 2 year service, which i replied yes, that included interior filters and brake fluids.
I gotta say, brakes feel a lot better (after 2 years, 25 laps at Kymiring, 4 laps at ahvenisto and 34k km).
summer tires still had 5.5mm of thread left all around, they realighed matrix lights, and notified me about the plastic cover being broken on the bottom of the car, need to set up the date for that, since its ordered part at 120eur, but they thought it wasn't madatory to replace.

They took out the drive axle, added some goop tm, new bushings, did 4 wheel alignment and resetted all helping systems.
<MXM> ZeDestructor, there is no trying to Galantti. You either Galantti or not Galantti.
Motives Of transport:
VW id3