nice to see you're still alive! (and the lada as well)

but wouldn't it be easier to take an E30, and put lada body panels on it

Nope This is a quite easy conversion. In the past 1-2 years I'v seen quite a lot of suspensions, in lot of cars, I learned a lot from other people, so now, it looks easy Well, we will see...

Sooo I packed up for tomorrow... Wish me luck, i need a lot

Nothing came out well, the suspension hasent been set up, no new tyres to the front, etc etc etc I'm having low oil pressure, but why??? Shit I hope for the best.

Lightened the hood, and made a vent... Its just an alpha, for the next fiberglass hood.

Thats it, wish me luck

Good luck mancs! And please, post vids and/or pics of the event!

I'm taking my mate, so if the car will run, there wil be vid and pics as well!

Thanks everyone. Well the practise was.. Not to good I didnt drive the car almost a year now, so my driving sucked hard But the car ran fine, and the new servo was quite a help. I need to adjust the suspension, there is literaly no caster, so the steering wheel wount turn by it self, and I'm used to that style. My gas cable broke aroung 4 pm, and @ 4:10 pm the rain started real hard. So the practise was over. I hope the next weekend I can go o Kakucs again to practise Only depends on money.

I have a few pics of me and my friend (blue lada), no vids tho

Bit to much angle, but i saved it :

Looks like fun, why does your friend have mismatched rims?

Heh, you guys are cool I always think that you need mad money to go racing, you are doing it for less than most people pay for gas in a year.

Well if you are amateur, its not so expensive. If you go pro, well than it is... But I'm still not so good at driving, so getting pro isnt frightening me yet

Some more pics (mostly of Zola): 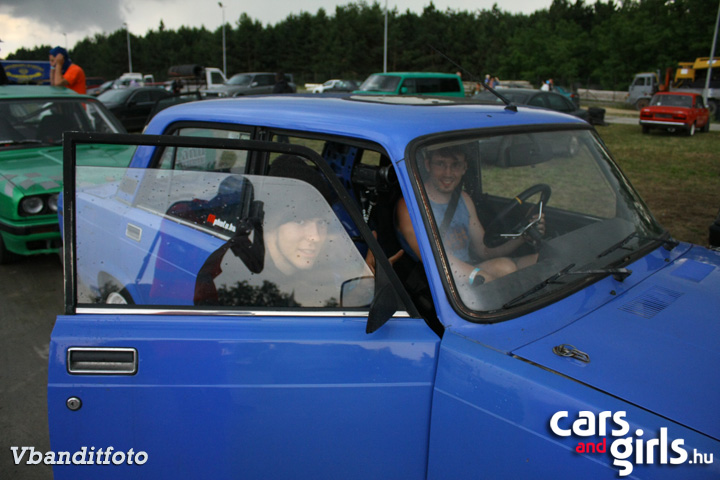 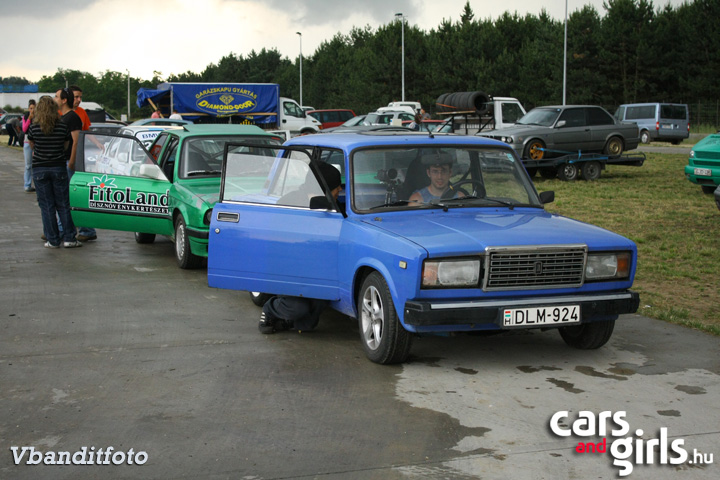 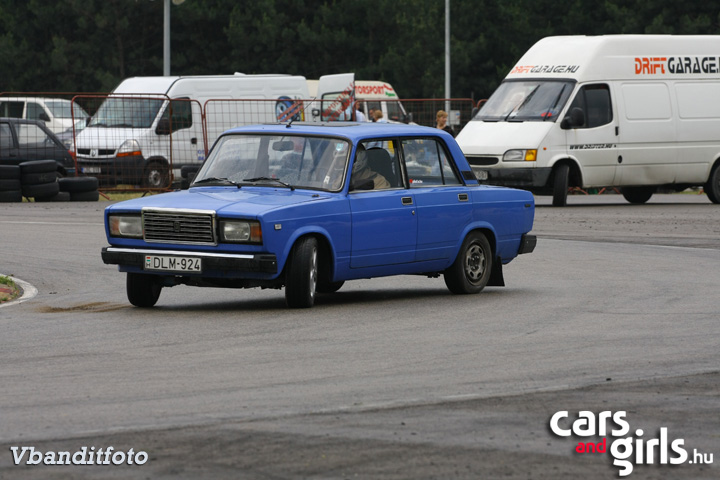 Trumpets on, lets hear some sound (well the quality of the vid isnt to good..):

Lowered the car a bit more, changed the rear springs to harder one's, left front damper is bad, need to replace it. Well thats it. I just LOVE how she sounds now

Whell a lot happened since I wrote here last time. I have a lots of work lately, so I wasnt near the internet, and my car was neglected as well... BUT! I was on a drift practise 2 weeks ago, with my friends car (Zola, the blue lada), and on a slalom/rally race this weekend. The car is almost identical to mine, a bit heavier, and softer, but I loved the setup. It also has electric steering aid as mine, so its easy to drive. The suspension is set up far better than mine! So I copied the settings onto mine, hope it will work .

Here are a few pics, mostly of Zola, but the last one is me (left foot braking on the pic ) 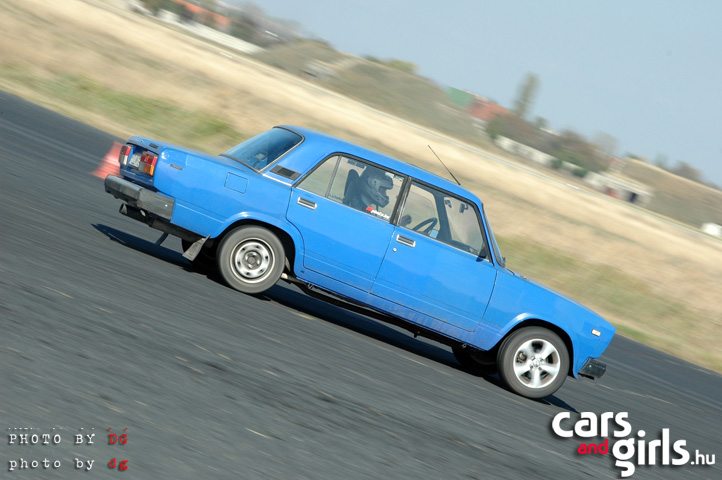 The slalom/rally race was such a fun! I always loved racing against time, even in LFS. So I couldnt wait. When Zola arrived I saw he didnt change the 155/70 13's at the back... So we didnt really have ANY traction at the back :lol: . The track was quite long, quite fast, and very technical. Never the less, I could do a 2:07:50 and Zola could ran a 2:06 something. We beated some cars with over 150 hp and slicks!! Well It wasnt us who were good, but the others bad/ or couldnt warm up the slicks. My friend joined us as well with his 4ws Prelude, he decided to go with slicks... Terrible thought. He spuned 2 times, and the third time he went really slow, to avoid spinning. He could ran a 2:10 Fuck cold.

Btw I came second in our group, and Zola first... Cos there were no more lada's, and it was a lada cup :lol: . we went 3 laps, and the 2 best one's counted. Zola beat me with he's car with .13 . But if he wouldnt spin in the last run, it would be much better. Well Its his car, he knows it.

So I have my first trophy :lol: To bad I didnt beat anyone for it . We made a lots of onboard footage, and some from the outside, will post it up later.

EDIT: BTW, forgot to mention, the best time was 1:54 something, and the worst was 2:46 ish or sthing like that. So I was 13 sec away from the best time (witch was ran buy a Honda Civic 180 HP racecar witch means slicks, and suspension, and well, everything..). I think next time I'm going to take some slicks with my self...)
Last edited: Oct 27, 2008

Dewd! That is absolutely awesome!

My best lap. Well there is room for improvement

you and your friend are badasses. hats off

So here are al the vids:

My first lap, onboard:
http://videos.streetfire.net/video/Rad-Cup-Tkl-My-very-first_194658.htm

My best lap, onboard:
http://videos.streetfire.net/video/Rad-Cup-Tkl-My-best-lap_194636.htm

Me from the outside:
http://videos.streetfire.net/video/Rad-Cup-Tkl-Me-from-the_194696.htm