Thanks you guys, we are trying

Sooo. TOmorrow there will be a drift practise. Iv set up the cars geometry:

Well we will see. On the short test run it was waay better than before, so I hope for the best

Good luck dude!!!! As always pix and vids are a requirement!

Vids, and pics to come soon

Pics of me with my car: 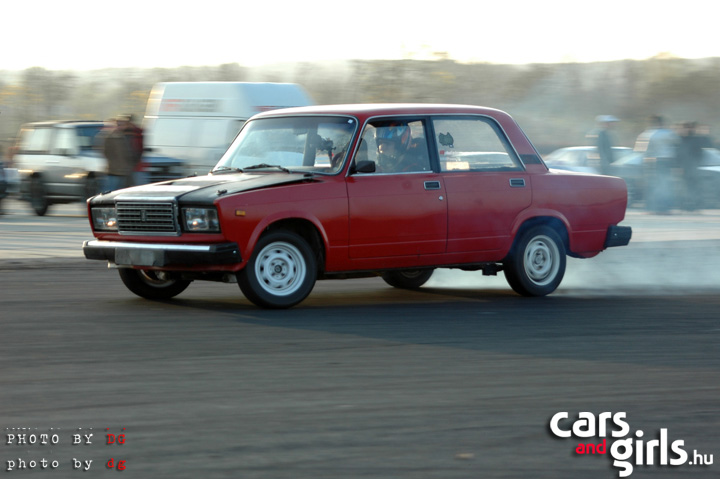 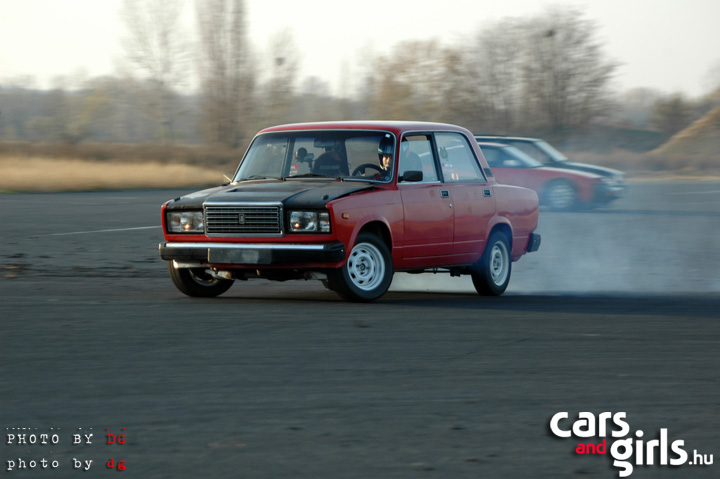 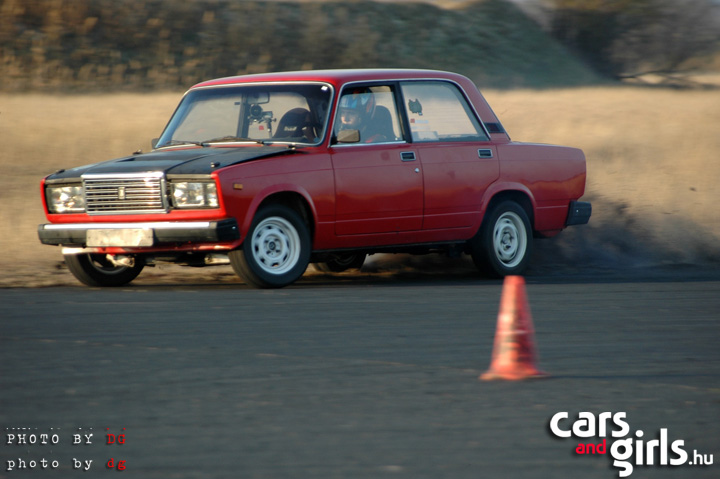 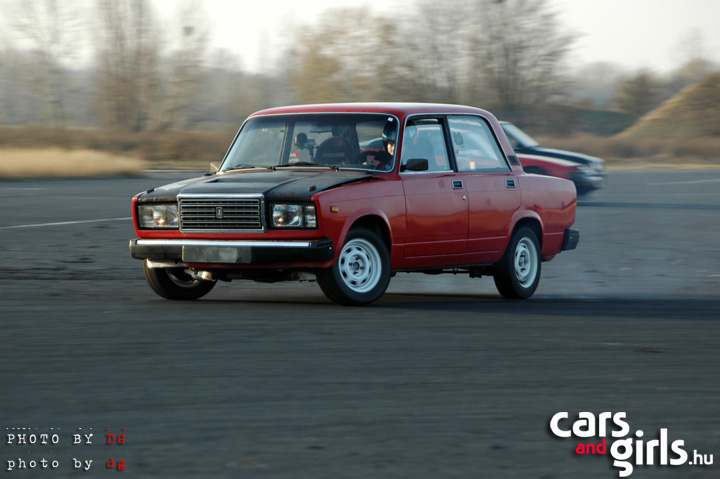 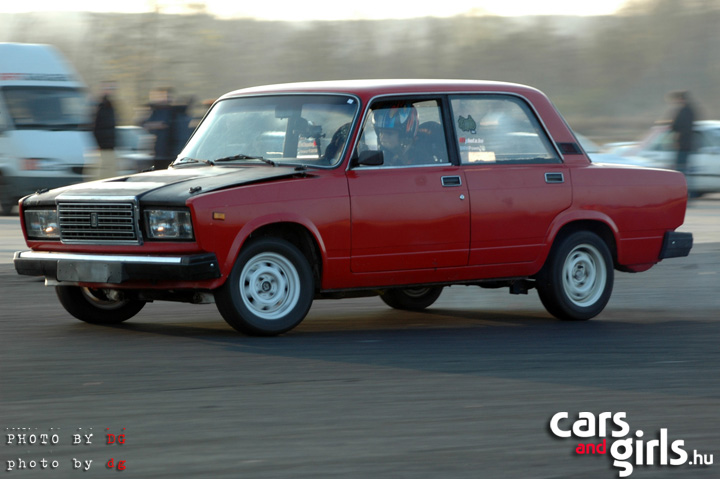 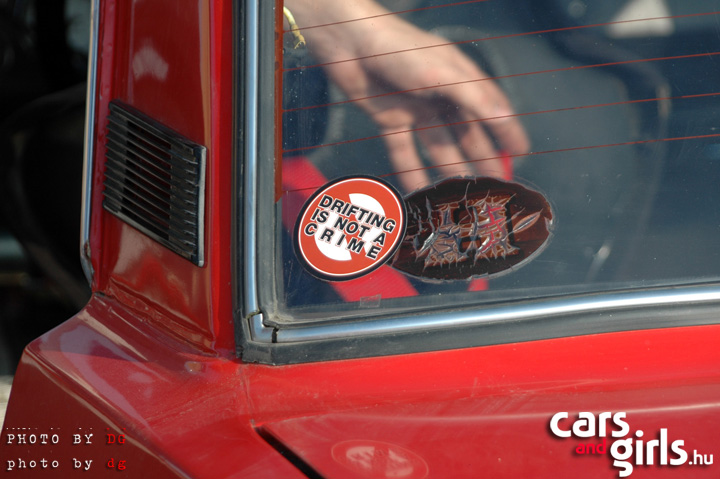 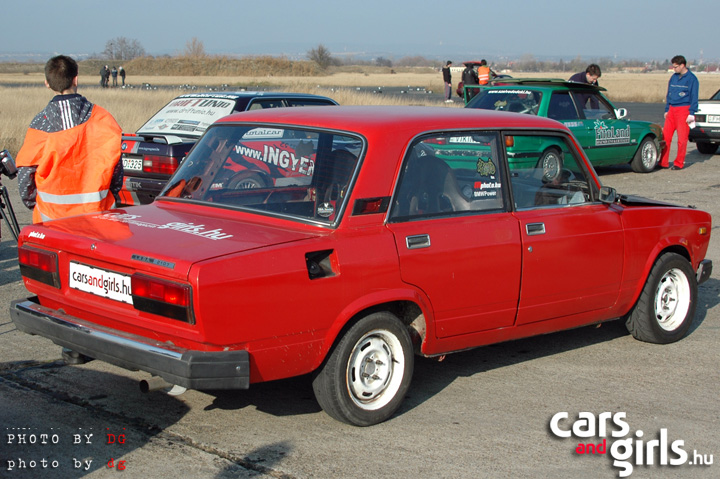 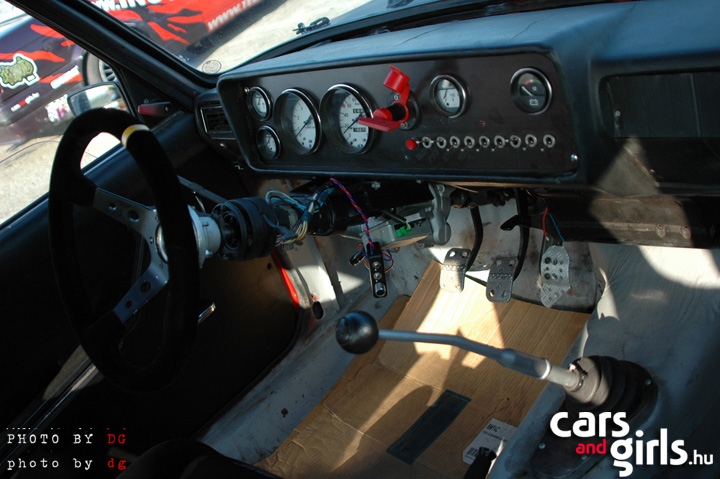 Zola rockin my car with a happy passanger: 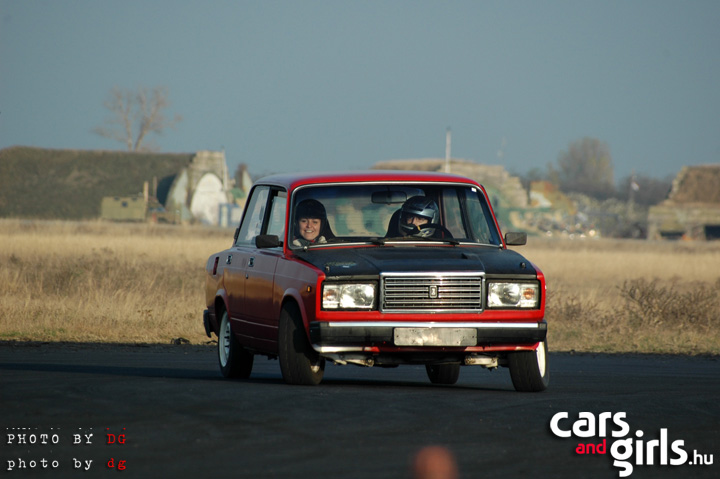 Another friend trying my car: 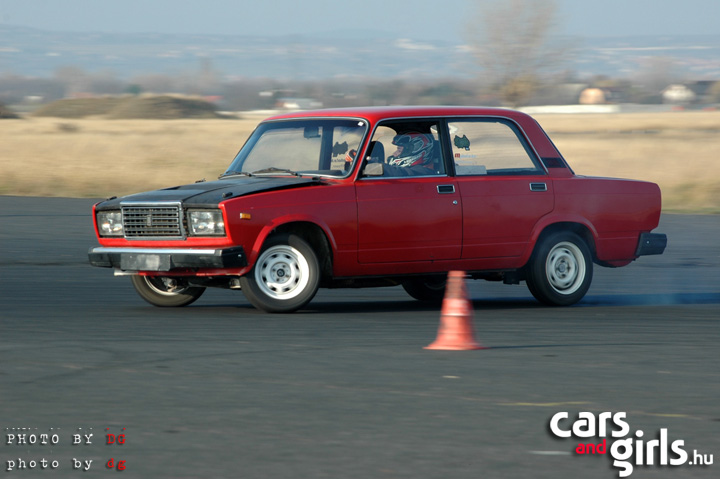 Same, but with me on the passanger side frightened: 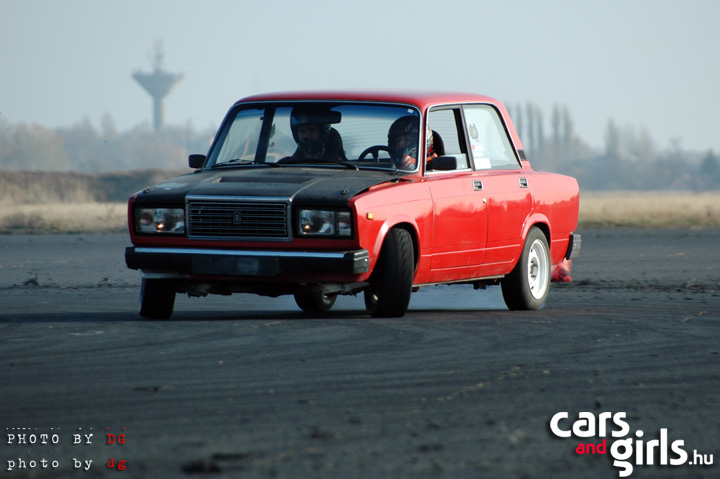 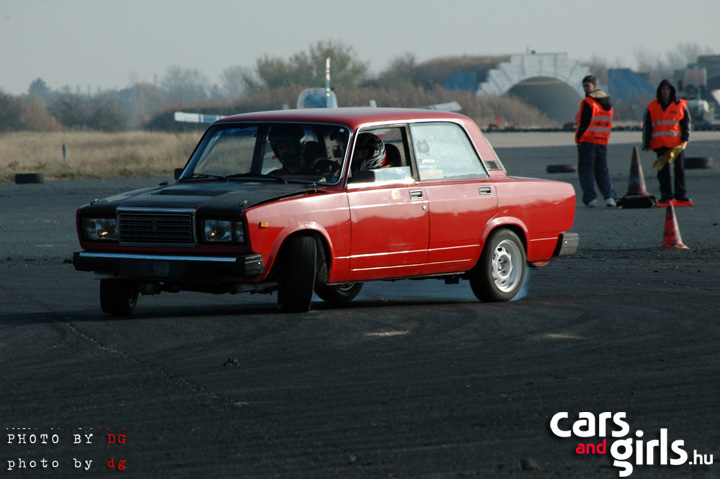 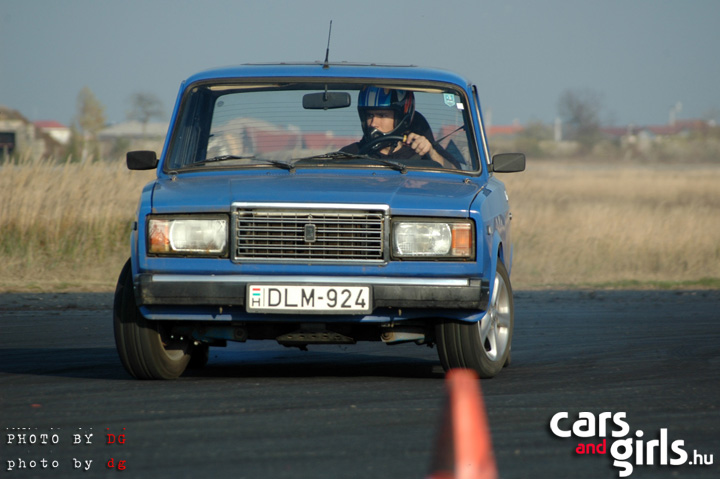 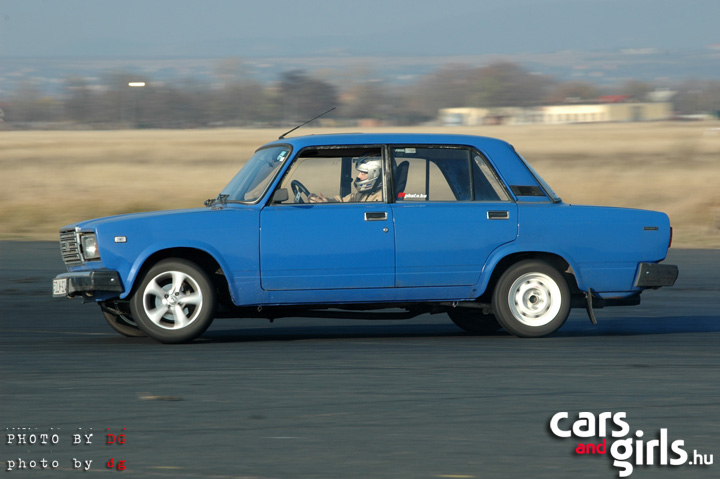 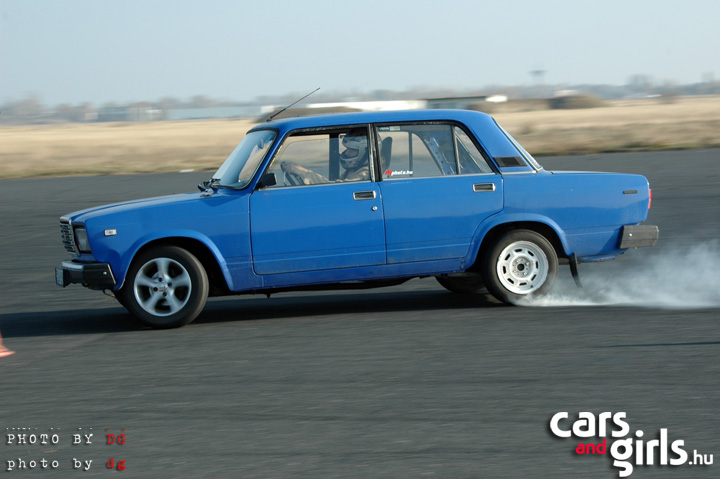 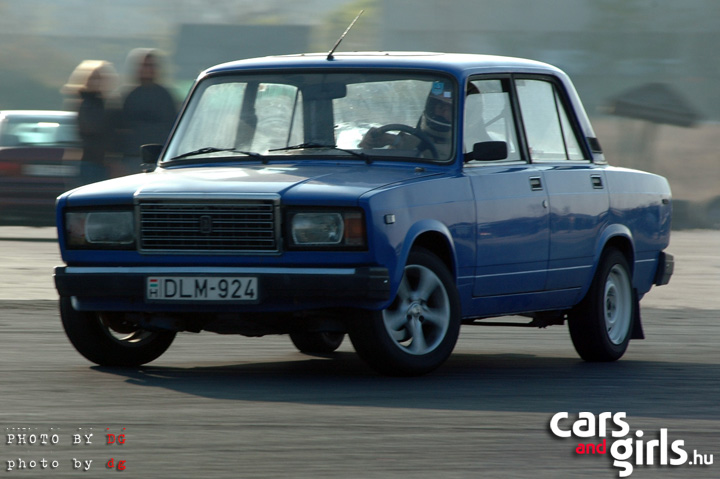 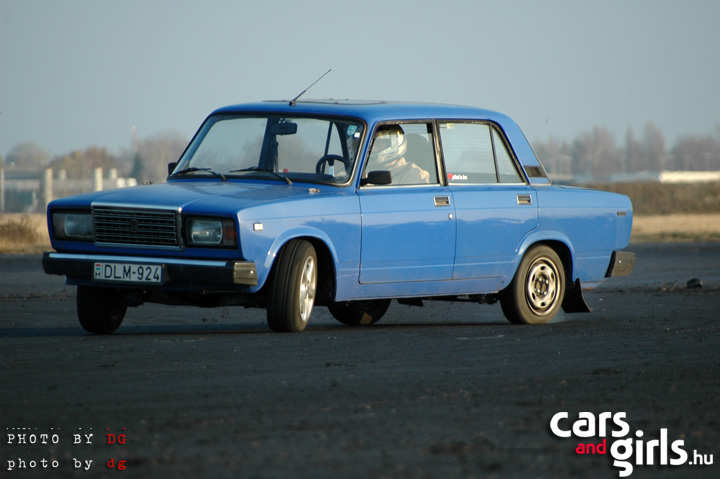 btw I have to say, many people came and sad a few nice words about the car-cars. Its truly paying of to be with a lada and not with a bimmer (99% of the driftcars are bmws..). So its the harder way, but lets hope, that its the better way Im too lazy and busy to upload the vids, so it may take a few days.

i watched the vid from your AutoX event, not only do the Lada's actually sound pretty cool, and seem to go pretty good, that track was awesome, i do a little AutoX... and i'd have loved trying that track.

Yeah it was quite technical, I loved it. We are going next time for sure

What engine is it? How much hp/nM???? And you have a shortend gearbox? Or is it that short in a normal lada?
Sounds like the gearbox is similar to my short gearbox.

ABSOLUTELY the best thing ever! I'll be off looking for a Lada!

well we didnt run the engine on a dyno, so we can only guess, maybe around 110-120 hp and similar nm? Dont know really.

So its not to good, but a good trany is costy..

Beni dont you dare to change your Fiat Absolutly love that car!

NooDle said:
I have never wanted a Lada 2107 more in my life than I do now.

Why dont you just buy one?

So vid is here. Only onboard atm: Clickdy click

Btw, wouldn't a mirafiori gearbox slot right into a lada? Maybe you could look at those? Also, a 5 speed lada box could be better?

Nah, the 5 speed lada box is the same, just the 5th is 0.7 Fiat transmissions are good, but very rare here :S

Do you have any mroe interior pics of the car? I'd be very interested in seeing more of the seats, steering wheel, gauge cluster, etc. This is the best car at Finalgear, hands down.

Btw, about the Mirafiori gearbox, it's ratios are:

Should be better than the lada units, its also stronger and supposedly almost bolts straight in, I'd look at them, even if they are hard to find, I mean, you surely have salvage yards etc. there?

^ Hm actually it does look better! Hm I do got a few pics of the interrior, will dig it up later I bought new gauge and some carbon parts for the interrior Will post em up later. Btw my tranny problem is solved:

Update, I bought a Fiat 2000ccm engine with a sport transmission

The engine is ripped apart for now, and being rebuilt as we speak. Its going to make around 140-150ish hp. sounds good Factory 130 hp engine from a Fiat 130 TC. With stock cams, stock 1.6 L pistons (gives higher compression ratio from factory 8.5:1 to 10.5:1 (if i remember well...)), ported polished head, new bearings sealings etc. And my dellorto carbs of course Zola bought a Lancia engine (same as the fiat btw), its rebuilding has not yet started. Its a bit weaker (factory 122hp), and it was an Injection model, but the injection has to go, carb power Will make the same amout of power.

The transmission is made from the factory tranny, but with straight cut gears, and very, very good ratios:

Same as the factory Lada VFTS tranny. Il shoot some pics of the engine tomorrow! The first gear is quite long, but Im not going to use it to much so... And let us not forget that this engine isnt 1600 ccm but 2000... It has a lot more torque, and in the lower rev range. So Im quite buzzed up how well its going to be Fingers crossed!

Just a pic I love:

Possibly a bad joke but...have you also thought abouth changing the body of your car? You know, so it doesn't look like a Lada
(I'm sorry, it's just that I've seen way too many Lada's in my life, and I've had enough of them)
You must log in or register to reply here.
Share:
Facebook Twitter Reddit WhatsApp Email Link
Top