Can confirm, Mustang can do corners. I wouldn’t recommend riding in the back seat with a helmet though.

If I remember, I will upload a shakey cam recording from the back seat while at Harris Hill.

That digital dash is very slick, I never would have imagined Ford USA to implement something like that.

Great car, enjoy the power and speed and don't end up another tragic Cars & Coffee stereotype!

That digital dash is very slick, I never would have imagined Ford USA to implement something like that.

Great car, enjoy the power and speed and don't end up another tragic Cars & Coffee stereotype!

Right, so yes there were some track antics since my last update. I've not got any good video though, so apologies on that front, there's just what @93Flareside had, maybe @Der Stig has something he can dig up from a shallow grave, I'm not sure though.

On the track it seems quite capable. The suspension and tires make for a very controlled experience if you know what you're doing, but it's also just as easy to put down too much power and let the rear step out, as @thomas and @93Flareside may be able to attest to

It is apparent that 10 speeds is too many on the track though. The car can't seem to make up its mind as far as which gear it should be sticking with so it's constantly trying new ones, whereas it seemed to be that if it did some gear skipping in the mid range it would perform a bit smoother. Maybe it's something to do with the track, maybe it's just a matter of using the track and shift modes in the correct combination, in either case there were just too many gears going on to make for the best performance. No issues with heat and the brake stayed strong, so a big positive there at least. 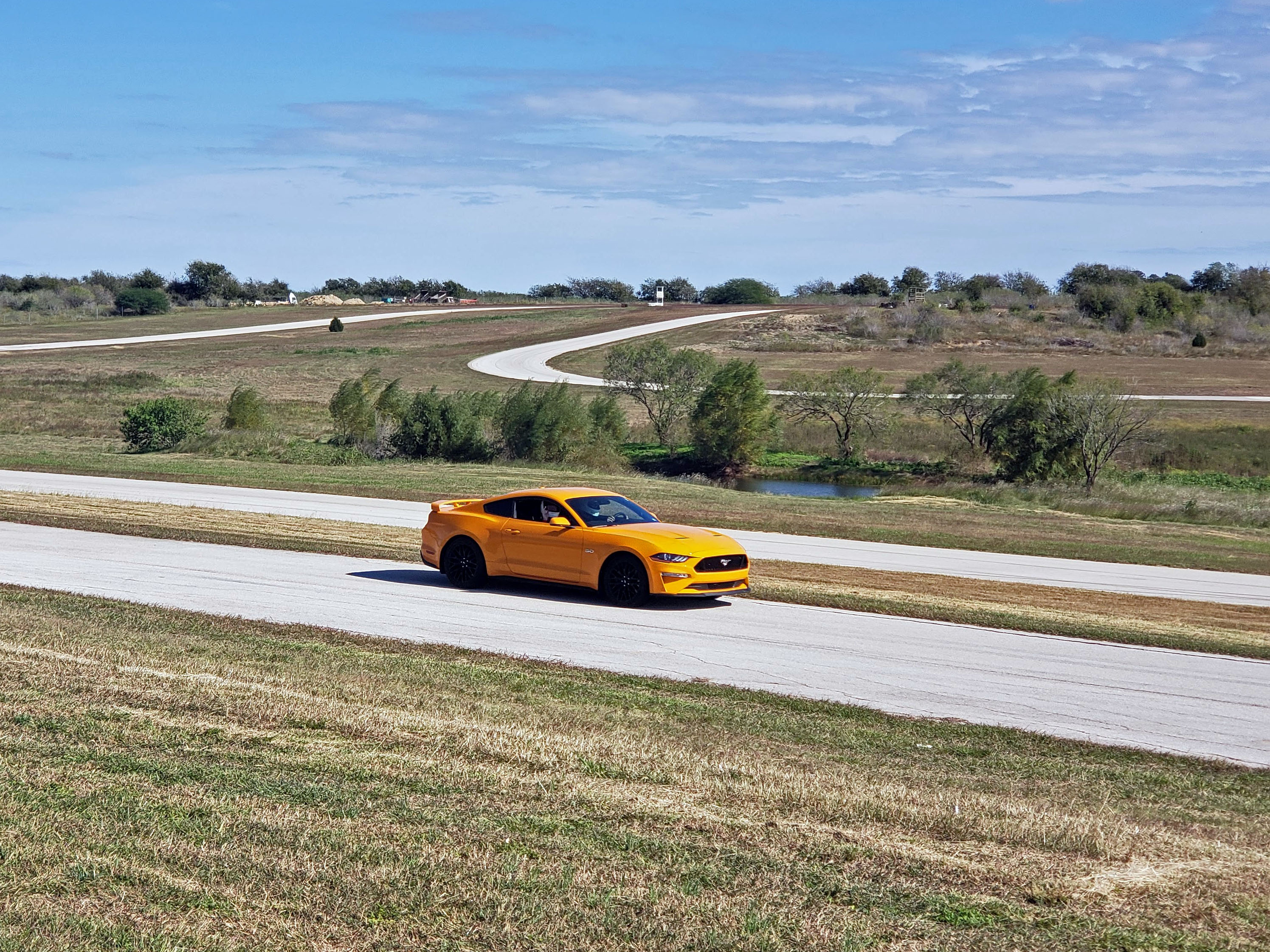 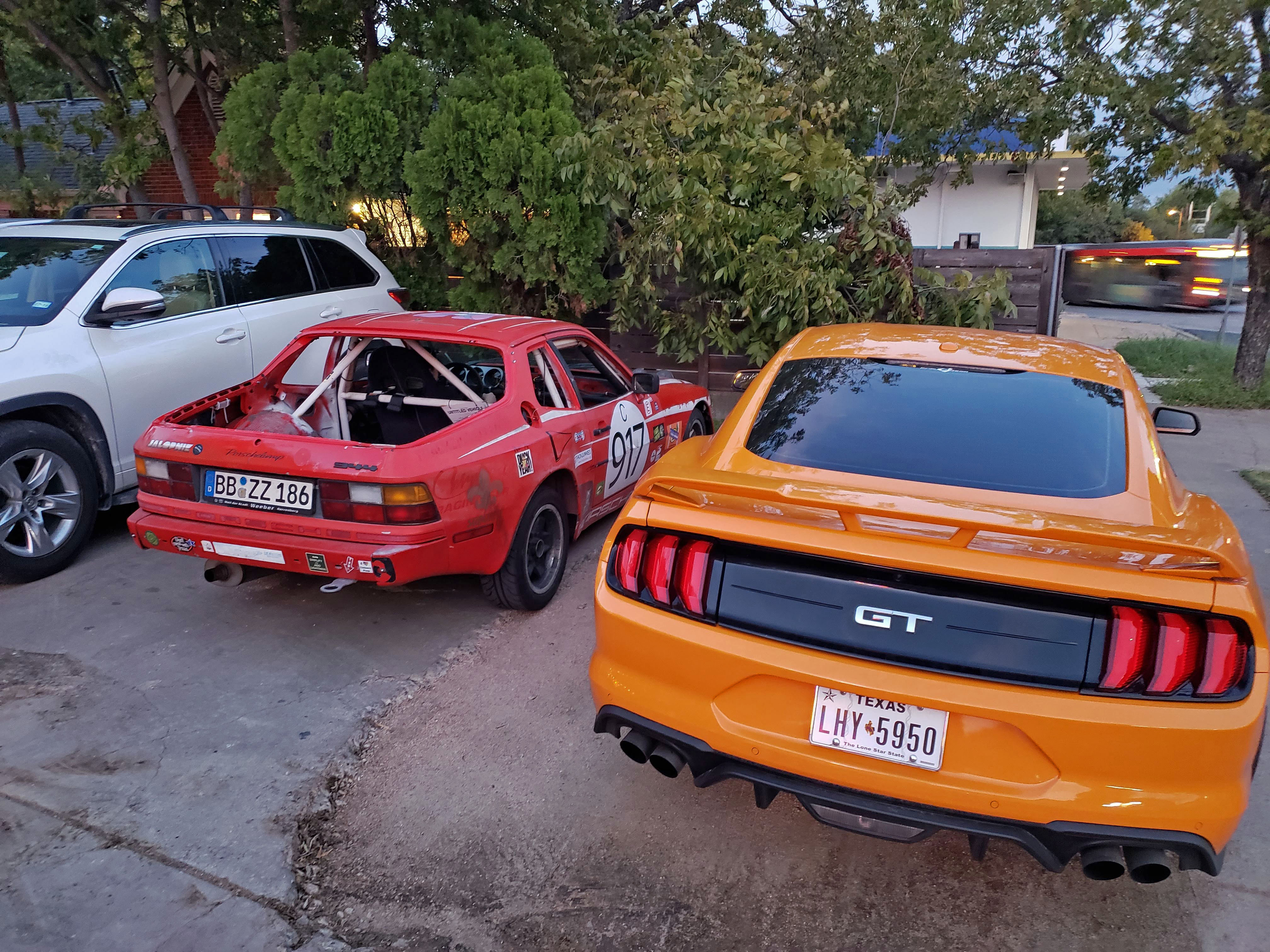 There have also been Mustang Bro antics with @Crazyjeeper 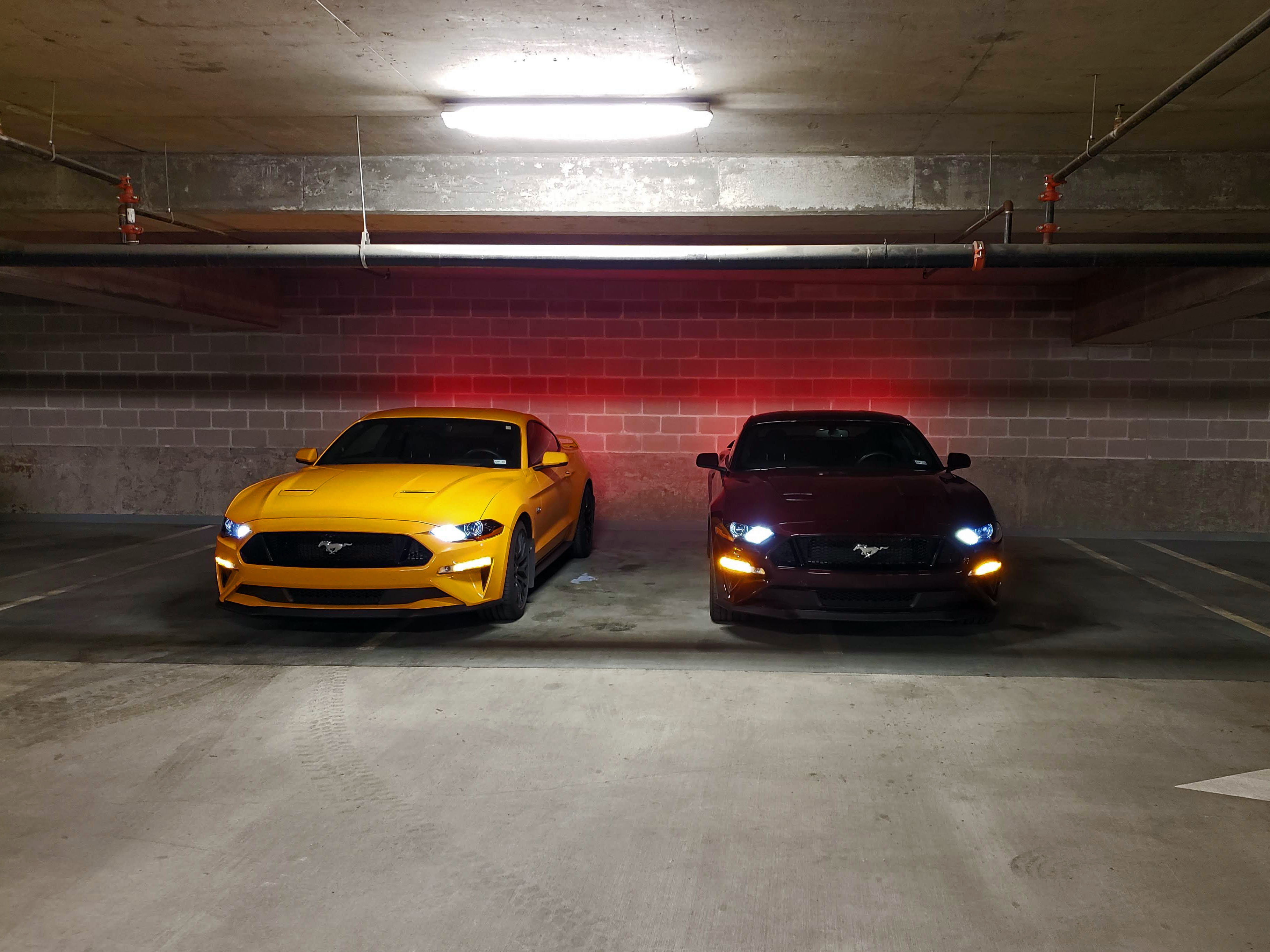 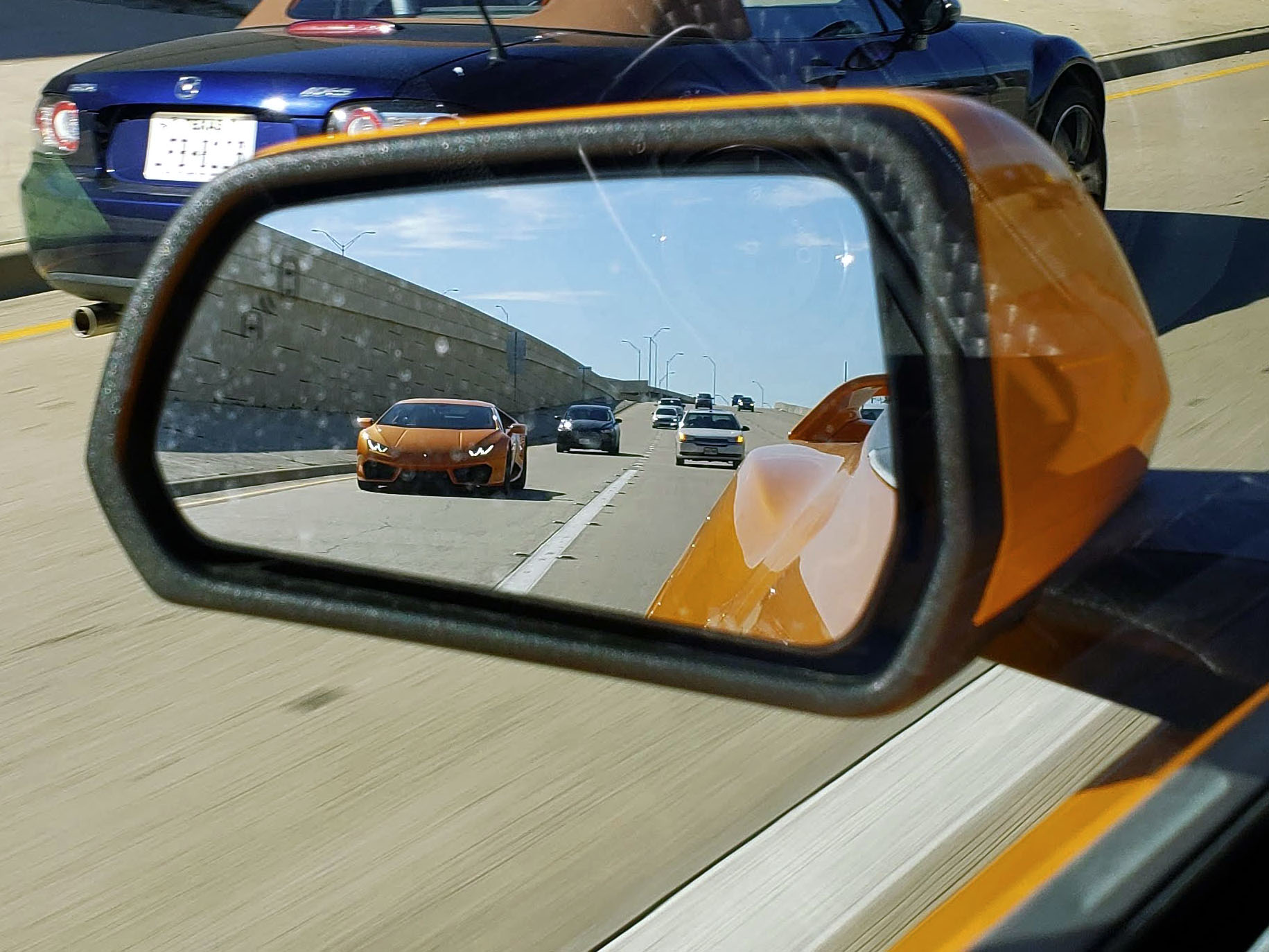 General update wise, I've just passed over 5000 miles a week or so ago. Did the first oil change (10 quarts!!). Very little in the way of issues so far, just a couple hiccups with the stereo system months ago where it didn't seem to want to turn off with the car, but that hasn't happened again or been something I was able to duplicate, so perhaps it was just some bug.

I can also report, performance wise, these are quite beastly. On a damp day without bothering to really put some heat in the tires I was able to lay down a 12.75 1/4 mile time at 118 mph, stock. In the right conditions with some practice these have been shown to run 11's stock. I've also hit the limiter at 156 mph, and it gets there so much faster than my previous '15 GT got up to top speed. It also runs right up to that 156 figure turning about 7k RPM in 7th gear, so the car has even more headroom between the extra available RPM and 3 more gears which is locked out from the factory. I suspect a good tune could unlock a bit more fun there

My car is Greener than your car.​

Nice mate. Been getting more and more interested in the 2018+ Mustangs especially the 10 speed cars. What do you think of the standard seats in comparison to the recaros ?
THE FLAT EARTH SOCIETY
"Deprogramming the masses since 1547"

stevanford1 said:
Nice mate. Been getting more and more interested in the 2018+ Mustangs especially the 10 speed cars. What do you think of the standard seats in comparison to the recaros ?
Click to expand...

If you're built like a toothpick and *won't* be daily driving the car get the recaros. Otherwise the standard seats are a better option- they have pretty decent support on the sides and are pretty comfortable unless you're a very large person, then they may be a bit tight for you. From what I hear the recaros are not good for living with day to say as they are very racing seaty.
My car is Greener than your car.​

I have the S197 Recaros in my car and I daily drive them Spring-Fall and love them. Wouldn't give them up for anything. And the S550 Recaros are even better. I do wish Ford gave you the option to get cloth Recaros in a premium package car, but oh well.

Past 8000 miles now. Not a whole lot of changes. I've installed Ford Racing hood struts (as they should have come from the factory) so I don't need the stick to hold the hood open any more. I also swapped in the '18 model year dual tone horn, since they moved to a pathetic sounding single tone horn for the '19 model year.

Last weekend I took advantage of the long holiday weekend to visit my cousin who does a bit of auto detail work on the side and assisted him in doing a ceramic coating on the car.

It's luscious. The paint feels practically oiled now, it's so smooth.

Unfortunately I didn't get much as far as in progress photos go.

We started with a standard wash and dry, a quick clay bar to pull what large contaminants it had on the paint, then a quick rinse before we addressed two small areas of spiderweb scratches on the paint with a dual action polisher and light compound. At this stage it already looked and felt great. Following that the car was sprayed down with Iron X to fully remove any very small bits left, and based on the amount of purple that showed up there was a surprising amount still left.

The Iron X was rinsed off and followed with an IPA solution to fully dry and remove any leftover residue. Photo below is after the first quick rinse of the Iron X.

Also addressed were my wheels. At some point several months ago I suddenly had a bunch of white scratch marks show up on my spokes. Not sure what caused them, but they were pretty evenly spread around all the wheels and into the centers where they're inset from the edges and tires. I haven't curbed them or done anything stupid enough to run them into anything, so I just don't know what caused it. In any case my cousin took a bit of compound on his small polisher and was able to remove about 80% of them, so the wheels look so much better now.

And then the ceramic coating. He uses Element 119 System X, and we went with their top Diamond coating. Application process is pretty simple given the preceding several hours of prep work. Given that it was in the upper 80s temperature wise the day we were working the coating flashed off fairly quickly, so we had to go quickly. He applied it panel by panel and I followed behind a minute or two afterward buffing to a smooth and glossy finish. The changeover of the feel of the paint through the microfiber towels was crazy, they slide over almost effortlessly. I did miss two small areas and the coating set up too much before we noticed at which point it could no longer be buffed by hand, we had to use a light compound on the polisher to do the buffing in those areas as the coating was curing so quick.

We also went ahead and put a coat of their glass ceramic coating on my windows while we were at it. That stuff is a two part solution in a sectioned pouch you break the membrane between to mix them before applying. It went on very similar to RainX, but seemed to buff out more easily. I haven't had a chance to drive it in the rain yet to see how the glass coating works, but I'm not completely sold yet. In any case it doesn't hurt to have it.

And the coating is on. Two coats on the front bumper panel, and a not super thorough coat on the wheels because we couldn't be bothered to remove them to do the full cleaning process with all those spokes. The faces you see are done which is good enough for me for now.

At this point we were sweaty, gross, and hungry. A short break was taken to clean up before we went to grab some food somewhere with some neon lights and my cousin brought his fancy camera (He also has his own small photography business). Unfortunately many of the night time photos didn't turn out well as we couldn't find a spot with the right lighting.

So we called it a night and left it in the shop overnight to cure a bit more. The next afternoon we went for a bit of a drive (and some light antics) on the way to lunch with some more family.

The coating manufacturer advises not to get the coating wet or wash the car for 4 days after application to allow it to fully cure. Luckily the weather held out for the most part with only a small sprinkle of rain on day 3, so it wasn't a big issue. After it had cured though we had some lovely tornado spawning storms pass through. I took the Side of Ranch to work that day and left the Mustang parked at home, when I got back from work I found the coating definitely holds up to the hydrophobic claims.

At some point I got a nice bird splat on the hood. It was dry by the time I found it, when I went to spray it with some detailer to wipe it off just the force of spraying it took off most of the residue. A+ performance.

They back the Diamond coating with a Lifetime warranty when applied to vehicles less than 2 years old, and 8 years for vehicles older than 2 years, so it's safe to say they're pretty confident in how it will hold up. I'm quite happy with it, so hopefully it will live up to the hype around these coatings.
My car is Greener than your car.​