Awesome write up there!

Andeh said:
We even made the Daily Mail during our ascent; this picture beat me home.
Click to expand...

That's because it's red, in neat condition and classy


Andeh said:
I didn't have an umbrella...
Click to expand...

I like how you blokes taking on a rainy mudding without any topping...

To us consumers, that looks like biathlon naked in -35 blizzard.


Andeh said:
Smiling trialists in the woods! The end was near and spirits were high.
Click to expand...

...and the eyes were full of storytitle, and the teeth had lump of rocks behind them.


Andeh said:
It?s epic fun, and unlike any other motorsport around. I can?t think of a more eccentric form of driving, and can?t wait for my next in a fortnight?
Click to expand...


After all, i agree with loose_unit, it's a little book you wrote here, that has it's own atmosphere & coloring of the event. "Entertaining" is too plain to say about it.


Captain_Whine said:
Also, i wonder, what are entrance rules/limits for the car to participate?
Click to expand...

Well, since you should ask. Cars in the Vintage Sports-Car Club need to have been produced before 1931. Some cars manufactured or created from pre-1941 components are also acceptable, including some types of Austin Seven made in this period. (Mine contains many 1930s parts).

There's quite a few rules regarding the cars themselves to be in the club, but the long and the short of it is, components should all be pre-war with very few exceptions.

Specifically for trialling, you need a fire extinguisher, spill kit, towing strap, working lights, mudguards and a few other bits and bobs. You cannot have a limited slip diff unless your car came with one from new, and you use a period one to boot, and you cannot have off-road tyres, or tyres with a tread depth greater than 10mm. This levels the field quite nicely. You can read more here.

Found another photo of me heading up Honister Mine as well: The Ford Flathead V8 is from 1932 and thus isn't allowed unless it is part of an approved period 'thoroughbred' car in the eyes of the VSCC.

Therefore to get in with Ford V8 power, you need an Allard Special.


Andeh said:
you need an Allard Special.
Click to expand...

Sir, with your help i've just found me an ideal track-day

Fundamentally, it was seen as the time at which the era of the hand built sports-car was succeeded by those mass produced. Hence why hand built, thoroughbred cars such as the Allard, are allowed in post 1931 guise. Ironically, despite being mass produced, the Austin 7 is allowed, because it's mostly the same machine as that designed in 1923, and it'd be a little unfair to disallow it just because it had a long production run, so my car is in too.

From the VSCC site:

The question of the age of eligible cars is one which proved to be pivotal to the continuing history of the Club. Initially it was intended that the five-year-old rule would be on a rolling date basis and that in, say, 1937 a 1932 car would be allowed to compete. However it did not take long for this to change. At the Annual General Meeting in January 1936 the Captain, Tim Carson proposed that ?During 1936, driving membership of the Club should be limited to owners of cars manufactured prior to 31st Dec 1930?. He went on to suggest that unless the membership numbers declined, the limit should be kept at 31 December 1930. Press Secretary Cecil (Sam) Clutton said that he favoured 1930 as the limit year because it marked a definite period in motor car manufacture and that from 1930 onwards a new type of [mass produced] sports-car had become popular, a type which was not particularly desired in the Club. One member complained that if the proposed alteration to the rules were carried, the cars in the Club would eventually become so old that they would disintegrate and that if a later date were not subsequently adopted the membership of the Club would decrease. Captain A W Phillips of the Royal Automobile Club, even then the rule makers of motor sport, was not present but was quoted as saying that he considered it absolutely essential for the well-being of the Club that the year of eligibility for driving membership should not be advanced. There was further debate around the subject before a vote was taken which resulted in 23 ? 5 votes in favour of keeping the date at 31 December 1930 and thus establishing the identity of the Club as it was then and as it still exists today.
Click to expand... Last weekend was the VSCC Cotswold Trial; 13 hills over a morning and afternoon. It was an interesting trial for certain, starting with the car failing to start in the morning. I put this down to a cold night before, and after a push start we were on our way to scrutineering. This was located at the Bugatti owner's club at Prescott, the same site where the afternoon hills would be. The queue was an apt reflection on the rest of the day, with cars needing to be pushed up the slick mud (once lawn) forward to be inspected. I gave a hand to a few drivers pushing their cars up the line, so before I'd even touched a hill I was pretty dirty.

This time I whizzed through scrutineering and got my little ticket to say I'd passed, however when I came to start the car to move away, once more she wouldn't budge. Testing the lights in the queue had wrecked the battery once more, and it's at this point I realised it must be pretty fried. (Fairly common on trials cars with old batteries, as all the rough movement dislodges any corrosion and muck on the plates and stops things working). A kind stranger leant a battery booster and we started it again; this time I knew I was in store for a trial where I couldn't turn the car off, nor stall for fear of holding the rest of the event up while I got going again. No pressure!

On the way to the first hills we passed the snowline, the first of the year. The first hill was an optional stop-start, but I needn't have worried as I failed to reach the stop, it was very slippery indeed. The next was a fairly simple down, round, and up loop which I cleared with no worries. The morning went on as a whirlwind of letting down tyres, holding onto my hat in the wind, trying a hill, pumping up tyres etc. etc. The weather was fantastic, having rained very hard the night before, followed by a glorious sunny day. A dry trial! It was blissful driving. Stand-out hills were a two-parter whereby failing the first would cost you access to the second, and thus losing 50 points maximum. We cleared the first, and got half-way on the second, so that went very well indeed in my eyes! Generally my scores seemed to be pretty average across the hills, and that was great for my second VSCC trial I thought. By the afternoon, we were fully into the swing of things, and came in for the last four hills at Prescott full of energy. And we smashed them! Four hills, potential 100 points, scored 99. So not quite a clean sweep, but nearly...

Final results show us at fifth in the novice class, just 20 points away from a third class award. I'm very happy, and Tom, my bouncer this time really worked to keep the car moving, and giving me the odd push where needed to keep moving. It was a great day, and I can't wait for the next. Another fantastic write up there! I absolutely cannot wait for the next one

Looks like great fun.
2014 Opel Insignia Country Tourer Biturbo CDTI 4x4
For once I don't have the same car as everyone else.

My next trial is near Eaton Leicestershire on the 29th of December, just a note for any Ukanian FGers in the area who like to come and spectate.

Today it started snowing, which after the devastating floods of last week is both a hindrance, but also a little bit of festive cheer in my eyes. So of course I took the most practical vehicle I own out, and got very cold in the process. 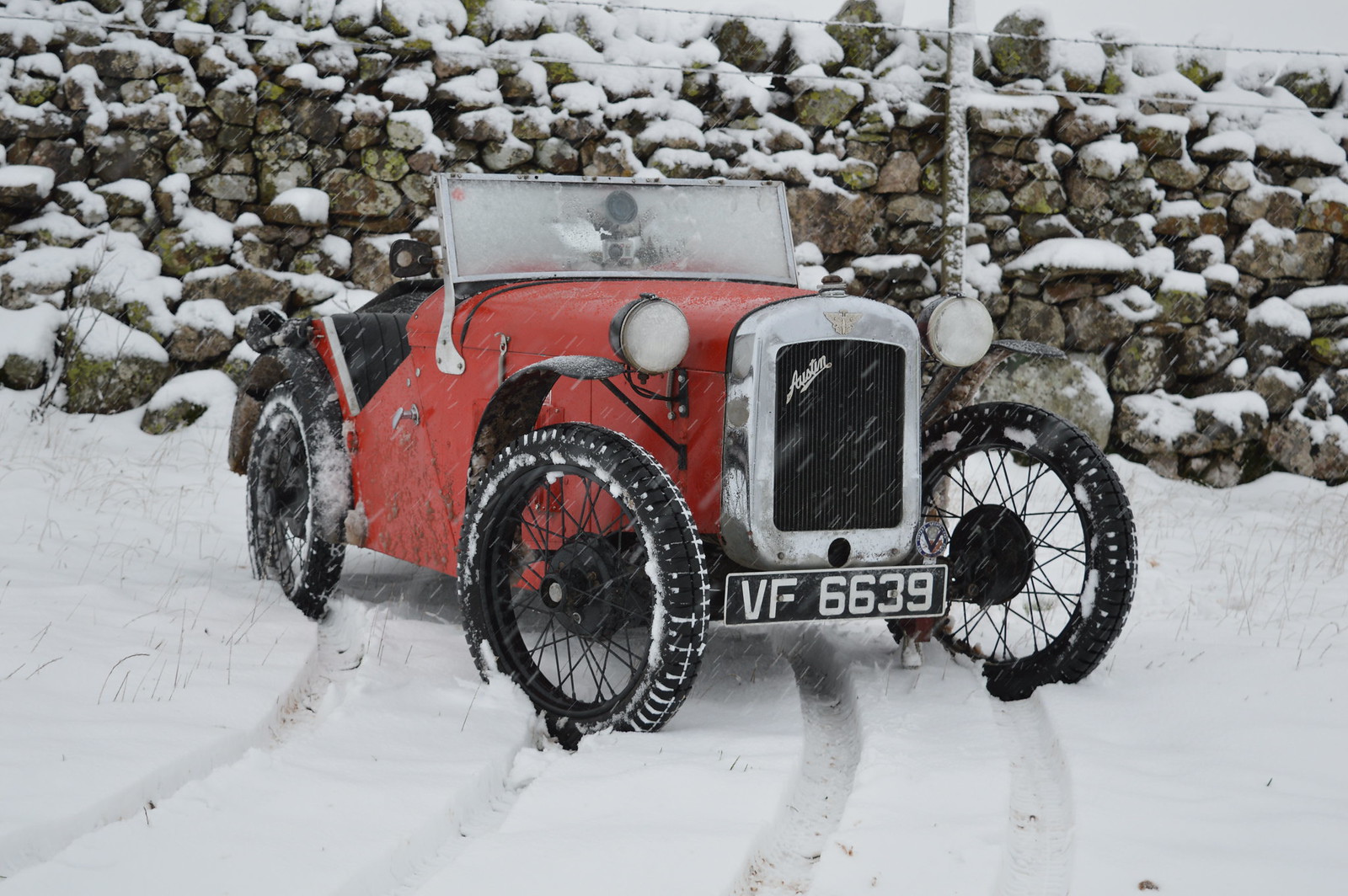 Austin Seven Special in the Snow by AndehtW, on Flickr 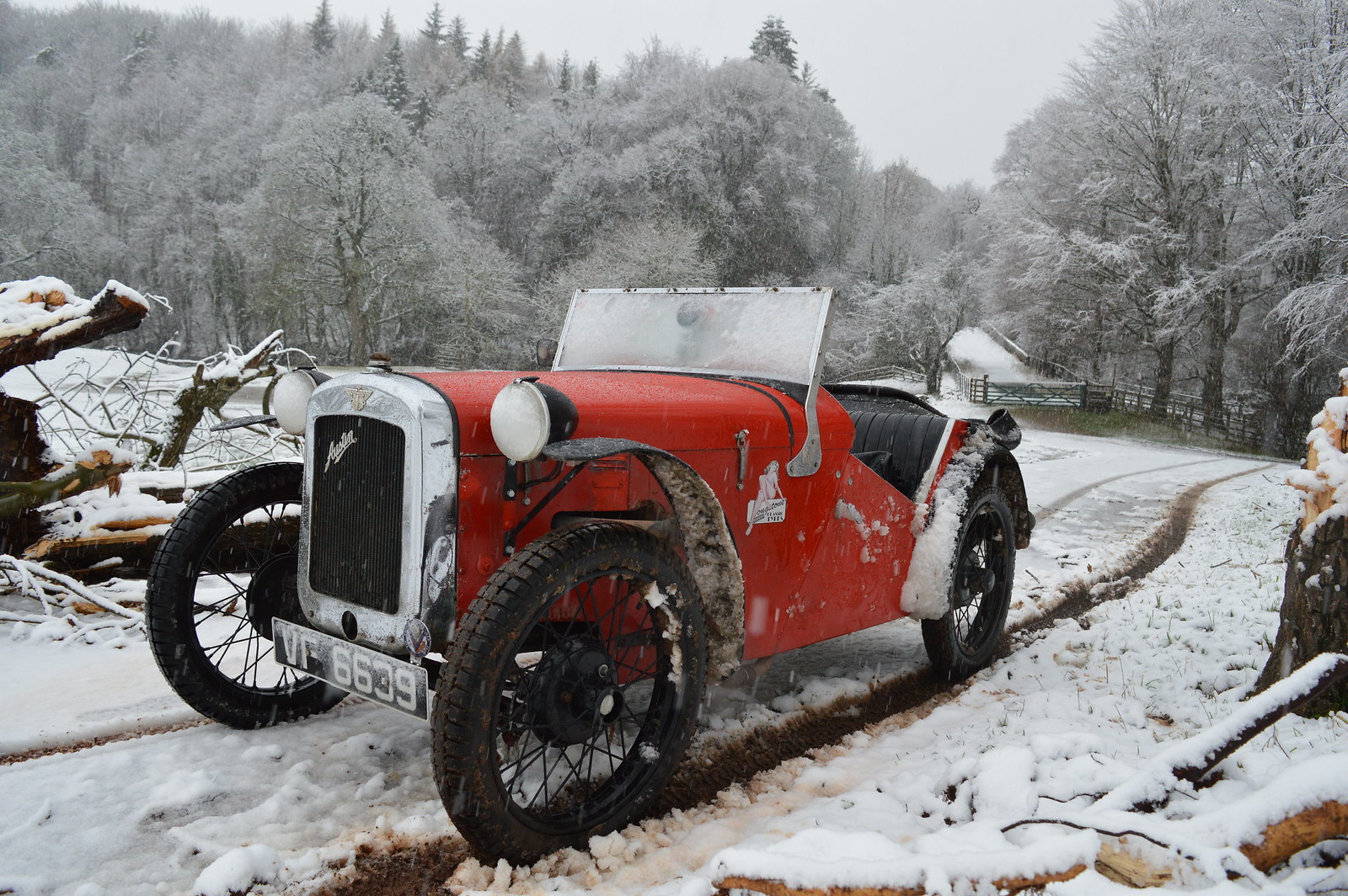 The Seven is coming to Ringmeet, right?

It would be a bit of an epic trip to do, and it might set a new lap record (hur-hur for being slow), but I suppose I could take it....

Andeh said:
It would be a bit of an epic trip to do, and it might set a new lap record (hur-hur for being slow), but I suppose I could take it....
Click to expand...

The mind is like a parachute, it only works when it's open

Andeh said:
It would be a bit of an epic trip to do, and it might set a new lap record (hur-hur for being slow), but I suppose I could take it....
Click to expand...

I'd cover a round of beer for all occupants

...though you would not be able to set a new slowness lap record for motorized transport, that's possibly taken by Walter R?hrl in his Porsche Junior tractor

Also, is there a heater, or it's a matter of warm coat?

Other than that, goes on fresh snow like a charm.

Damn, the last two pictures! A red car in snow!

I went trialling the other day in the snow, just some local green lanes nearby, but great fun.