Imagine how uncomfortable D'Antoni was during that? :lol:

what a season for the lakers...

Sucks that Kobe is out, but I'm secretly excited because Dwight is now the top dog. He dominated in the last game against the Spurs and without Kobe the rest of the team just had a better flow on both offense and defense.

Both the Lakers and Jazz have one game left. If the Lakers win, they're in even if Utah wins (ditto if they both lose). If the Lakers lose, Utah has to lose in order for them to make the playoffs because if Utah wins then they'll be tied and Utah owns the tie-breaker. If they can pull off a win against the Spurs, I'm sure they can do the same with the Rockets.

Last day of the season. The Grizzlies are beating the Jazz by 12 with 2 min. left in the 3rd. Jazz lose = Lakers in the playoffs regardless of the outcome of their game later on. If they win, they'll overtake Houston for the 7th spot and will face the Spurs in the first round.

The Playoffs have pretty much all of the match-ups that I was hoping for. Namely:

Most interesting to me

Thunder-Rockets: Harden gets revenge on his old team?

Lakers-Spurs: Lots of History, no Kobe though

Nuggets-Golden State: two run and gun teams, one in shooting and one in the paint. Expect high scoring games.

Heat-Bucks: Pretty much a forgone conclusion, but seeing Monta "have-it-all" Ellis vs. Mario "top-five point-guard in the league" Chalmers is always good. Also some chumps named Lebron, Wade and Bosh

Nets-Bulls: Two Knicks rivals beating up on each other and playing very physical

Memphis-Clippers: Defense v Defense, low-scoring and boring to me

Atlanta-Pacers: Pacers defense plus atlanta's poor offense is going to be slow to watch. Seems like a sure-thing as well (Pacers)
Last edited: Apr 26, 2013

Oh boy....After the kind of season the Lakers had I did not expect them to win a championship (especially without Kobe), but with that nice little push they had at the end of the season to jump up to 7th place, I DID expect them to put up a better fight and at least win the first round (It's not looking good being down 0-2, but they might take the two games in LA and get their act together to win the series).

In game 1, Nash, Blake, and Gasol each had more FG attempts than Dwight Howard; in game 2, Blake, Gasol, and MWP each had more FG attempts than Howard. If they want a chance to win: FEED THE BEAST DOWN LOW! I don't know WTF D'Antoni is thinking drawing up these plays where Blake and Nash become Kobe impersonators when his main focus should be getting Howard the ball.

I was glad to hear that the Cavs hired Mike Brown again because now the Lakers don't have to pay out his contract anymore. Before, they couldn't fire D'Antoni because there's now way they were gonna pay two coaches for doing nothing and paying a third to actually coach the team, but now they won't hesitate to do it because they would only have to pay D'Antoni for doing nothing while they get a proper coach to help get them to a championship.

Congrats to King James on winning his 4th MVP!


Only Michael Jordan, Kareem Abdul-Jabbar, Bill Russell, and Wilt Chamberlain have won it at least 4 times.
B The Heat were stunned by the Bulls mostly because they didn't play in over a week and were a bit rusty; the Heat will take it in 5 or 6. Also, holy shit that Spurs vs. Warriors game was exciting! Spurs were down by 16 (?) with 4 mins left in the game and they came back to send it into overtime, then another overtime that was finished by some amazing plays.

I want the Spurs to lose, really really bad. The bulls game was awesome though, they're definitely not a bad backup team to have.

It was great to watch D.Wade finally wake up.

This series is gonna have one helluva finish all tied at 2-2, 3 games left.
B

Very exciting series! I heard a great quote yesterday that I think sums it up well:

Best NBA game I have ever seen. An overtime game six elimination finals? with a buzzer beating desperation 3 by Ray Allen and a clutch block from Bosh at the end? Yes!

As a Knicks fan, the Knicks vs. Warriors game where curry got 54pts but still lost might be a close second though.
Last edited: Jun 19, 2013

That was an absolute THRILLEEEEEEEEEEEER!!!

LeBron lost his headband and seemingly lost his mind too! That RayRay 3 was just epic!

In the last game, LeBron didn't seem bothered by the fact that he was losing for some reason, but when he was losing in this game, the look on his face wasn't much short of a crazy person. :lol:
Last edited: Jun 19, 2013

Good game but not the best NBA game I've ever seen. Some of the moments were borderline ridiculous. I guess the idea of running out the clock was lost in those final minutes.

Cellos88GT said:
Good game but not the best NBA game I've ever seen.
Click to expand... 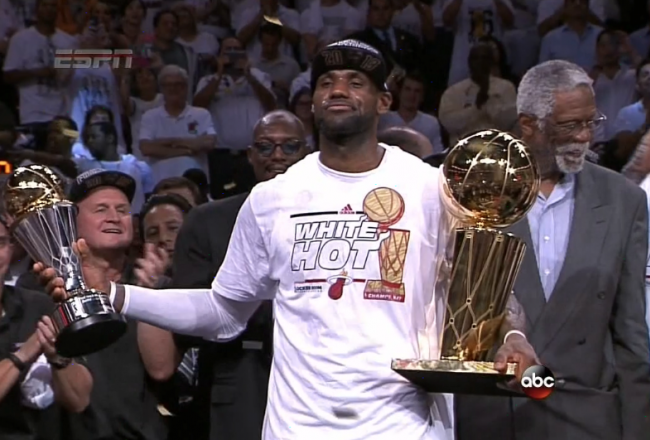 Says it all, really.

Congrats to the Heat for the repeat! LeBron just moved from 10th place to 4th on my list of all time great players (based on total MVPs; seasons and finals) because he got an extra 2 this season:

In an interview with the Houston Chronicle, Parsons, the Rockets power forward, said he's constantly texting and talking with Lakers free agent C Dwight Howard about coming to Houston.

?After watching that last night,? Parsons said, ?I hit him with, ?Come to Houston. That could be us.'????

That wasn't anything new for Howard. He has heard plenty from Parsons this offseason.

?I talk to Dwight every day,? Parsons said. ?I've created a relationship with him, where I feel like we're very close. He hits me up about everything. I've covered pretty much every question he's had. I basically tell him, ?We have a chance to be really good without you next year. We're going to have a good season. Why not come and join us, join our core guys who are for sure to be here and make us great, make us contend for a championship?'

I really hope Dwight signs with Houston because it's just a perfect fit for him. They have a great big man coach who can teach Dwight some moves (he also said that he's gonna visit Hakeem Olajuwon again who lives in Houston and can help him year-round), they have a similar inside-out system that Orlando had great success with (except Houston has a lot of young talent and Orlando had mostly older guys), James Harden would be a perfect sidekick (very talented but loves to give up the ball), and he's already friends with Parsons.

I think his future on Houston looks very bright, while his future on the Lakers doesn't look bright at all; Kobe's gonna be coming back from a whole off-season of rehabbing (not training hard like usual) just like Dwight last year, Nash is 40, Gasol, MWP, and Kobe are another year older, and D'Antoni won't be able to win a championship with the All-NBA first team. Think about who was running the Lakers for their past 10 'ships (1980-2010); the owner was the late and great Dr. Jerry Buss and the coaches were Pat Riley and Phil Jackson... Dr. Buss was an actual genius with a PhD, while his kids who are running the team now only inherited the business. After Kobe retires (next year is his last year on his current contract and I don't think he'll sign another one knowing Dwight ain't there. ) it's gonna be rebuilding time for them.
You must log in or register to reply here.
Share:
Facebook Twitter Reddit WhatsApp Email Link
Top