Norwegian Broadcasting Corporation (NRK) is currently broadcasting a programme covering the Norwegian Coastal Voyage (Hurtigruten; Some history here) from Bergen to Kirkenes, minute by minute, meaning one of their channels have had to be cleared for five days, making it 134 hours of broadcasting.

They are also streaming it online here.... There are altering between nine cameras on board the vessel MS Nordnorge, as well as camera teams on shore. Edit: On the map to the left there is a path of orange dots, if you click on them it will play the recorded sequences from that spot and onwards...

Right now they are sailing into the Geiranger fjord, very nice scenery...

I have sailed on the Hurtigruten vessels several times, it's a rather different cruise, often with multiple stops per day, and a different atmosphere to average mainstream cruise lines... And I thought staying up for nearly 24 hours of LeMans was a bit much.

Update
Alright that site is insane. I can watch any part of the journey by simply clicking on it. Crazy
Last edited: Jun 18, 2011

Very relaxing this. I have been sittin on the couch, drinking a nice cold beer and just watching

Wake me up when they're there...

I'm not getting the stream.....only possible explanation: the ship sunk.
"It's not right, this." : Anonymous studio tech on the killing of TopGear.

TobiasG said:
Very relaxing this. I have been sittin on the couch, drinking a nice cold beer and just watching
Click to expand...

Beautiful weather today, so there will be a nice sunset and a good chance of seeing the midnight sun...


Cowboy said:
I'm not getting the stream.....only possible explanation: the ship sunk.
Click to expand...

Absolutely beautiful light and weather around R?rvik as well as Svolv?r. I watched it live when the ferry hit Lofoten - breathtaking scenery.

Danish TV is planning on showing a shorter 12 hour version of the trip, but it's almost inevitable that some of the good parts will be left out.
Last edited: Jul 17, 2011

McRae said:
Absolutely beautiful light and weather around R?rvik as well as Svolv?r. I watched it live when the ferry hit Lofoten - breathtaking scenery.

Danish TV is planning on showing a shorter 12 hour version of the trip, but it's almost inevitable that some of the good parts will be left out.
Click to expand...

As long as the show some good bits of sunset before MS Nordnorge crossed the polar circle, some bits of going into and out of the Geiranger fjord, passing under some bridges, something that evening from R?rvik to Br?nn?ysund (with the island of Torghatten), bits of Lofoten with the sailing into Trollfjorden, and the slightly hefty weather up north after Skjerv?y. I hope they also show some people, who were in boats, on shore and generally everywhere the ship went, and also when MS Nordnorge met her south bound running mates, among which the waving competition/horn battle at Berlev?g.

Like I said, I have traveled on these ships several times, the last time was from Bergen to Oslo, on MS Midnatsol in January 2009, when she was attending the annual travel fair...

Her running mate in Oslo for the travel fair in January this year, MS Trollfjord

I would love to see Malangen Fjord again. I haven't been there in about 25 years.
Pudding can't fill the emptiness inside me! But it'll help. 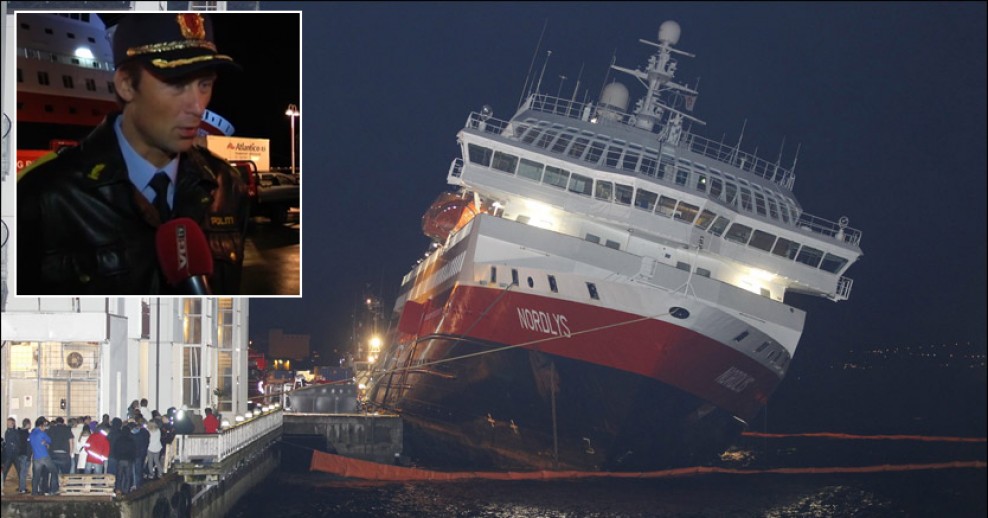 A fire broke out in the engine room while the boat was in the middle of the fjord, emergency unit pulled the boat close to land and the boat started to take in more and more water.

I think we're about to have our new failboat graphic.

19,5 degrees. They say that 20 is the supercritical level.

Reminds me of the explosion/fire on board the Lisco Gloria a year ago, that too had trouble with heeling over.
However, they towed it to a calm region off the south tip of Langeland, not into port.

That looks fascinating, and I get seasick watching movies.
The surest sign that intelligent life exists elsewhere in the universe is that it has never tried to contact us.
-- Bill Watterson "Calvin and Hobbes"

Spectre said:
I think we're about to have our new failboat graphic.
Click to expand...

Not funny... Two sailors died, one of them was an 18-year-old apprentice sailor on his first stint aboard. The other was the 57-year-old chief engineer. Further, twelve crew members were injured, two of them suffered serious burns from the fire and are still hospitalized. Fortunately all of the guests escaped injury.

As for MS Nordlys, she was successfully stabilized saturday morning after they managed to seal a previously undetected leak caused by a big gash in the hull, and get several more powerful pumps installed. The gash appeared when she was moored, bacause the stabilizers (which are normally deployed at sea) were not folded in as they had her towed to the quay. After the fire she lost all power, which means the stabilizers could not be operated and one of them was wedged into the ship's hull.

Although 20 degreed of list was said to be the supercritical level, she was at as much as 22,5 degrees at one point friday, just before noon. These ships are built to take very extreme conditions. Even though they managed to save the ship from the obvious disaster a capsize would be, she has sufferd severe smoke damage to her interior, as well as a burned out engine bay, and flooded crew accommodation, which means she will need new engines and a complete refit. Interestingly the cars on the car deck didn't move at all, despite over 22 degrees of list and not being tied down at all...

This was taken friday morning at about 22 degrees of list, which is very bad, and would casue most passenger cruise ships to capsize:

Cowboy said:
I'm not getting the stream.....only possible explanation: the ship sunk.
Click to expand...

MS Nordlys was successfully towed from ?lesund to Fiskarstrand ship yard today where closer inspections of the damage will be done in dry dock. They are also currently collecting bids on the comprehensive repair work that needs to be done to the ship...