Do you guys have the wiring instructions for the swap?
http://jimbutterworth.co.uk/8headlights.htm
"Power corrupts. Lack of power corrupts absolutely."
-Redliner, ironically

Labcoatguy said:
Do you guys have the wiring instructions for the swap?
http://jimbutterworth.co.uk/8headlights.htm
Click to expand...

Thanks! I've just removed all the wires and took them home to make an adapter, this will be useful.
Threads: Panda, 7, LS400, Daimler, Kawa​

X308 lights were mechanically direct swap. We got a bit confused at first, as the parking lights have been relocated to the high beams. I guess this means both lamps are illuminated when driving lights are on? Awesome toolbox doesn't have place for H7 bulbs! Well, it didn't have H4s used previously either..

Oh, and this is what UK weather does to your car in a nutshell: On the left is a ball joint type light cluster holder from the Daimler. On the right you can see a similar item from the US-sourced X308 lights. They're quite a lot younger, but... still. Actually one of those ball joint thingies had cracked (and it's screwed to plastic), so the swap required a bit more effort.

I can't wait to get it back on the road!
flickr 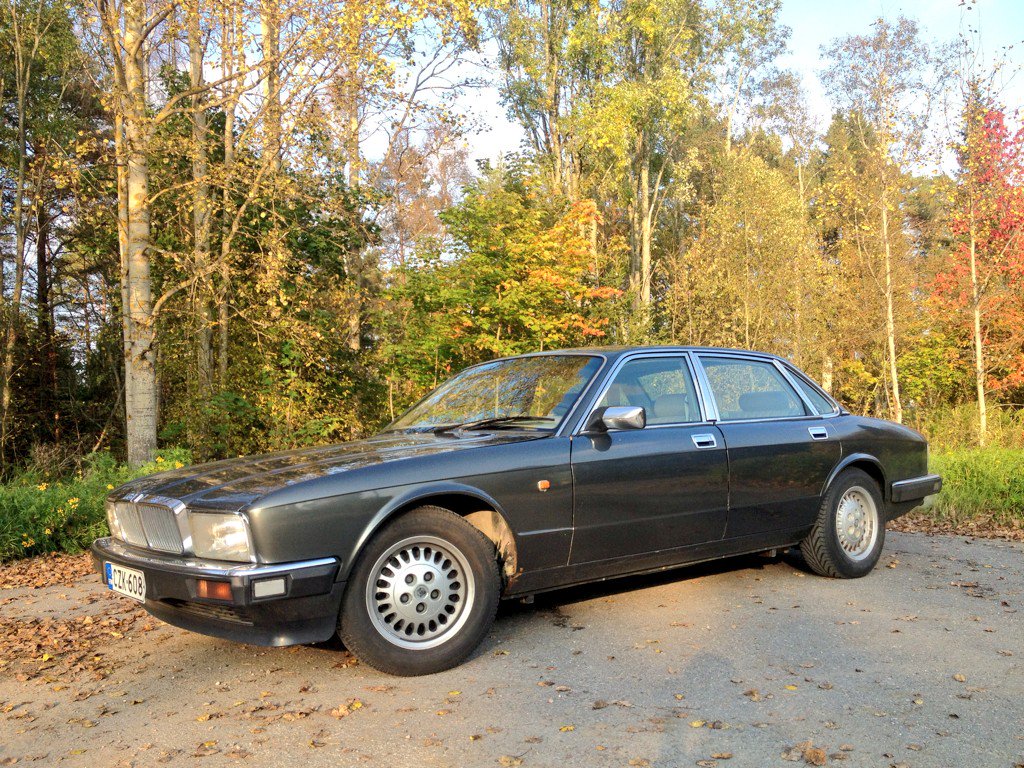 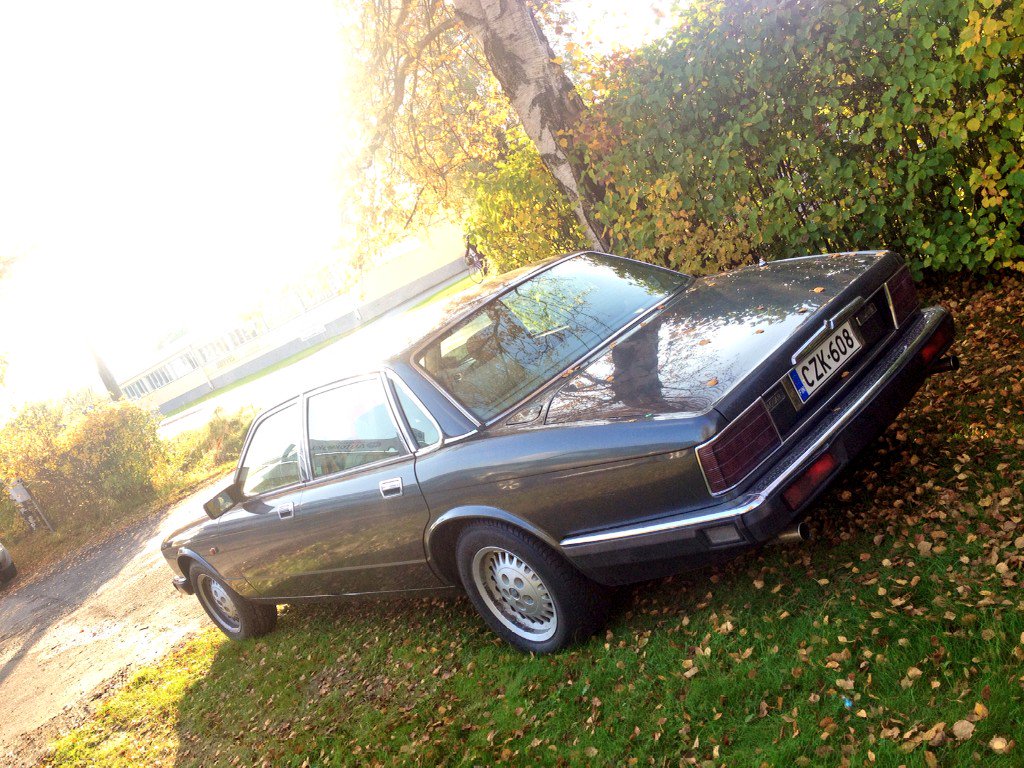 I have to say, I like the brick headlight design of the XJ40 a lot more, and there's something a lot more stately about the rear and the taillight treatment. The car rides on 15" wheels which cause the tires to be very balloon-like, which contributed to a waftier ride. And as it was a 3.2, I think I detected lack of grunt despite driving around in town traffic and not hauling ass like we did for two-three weeks 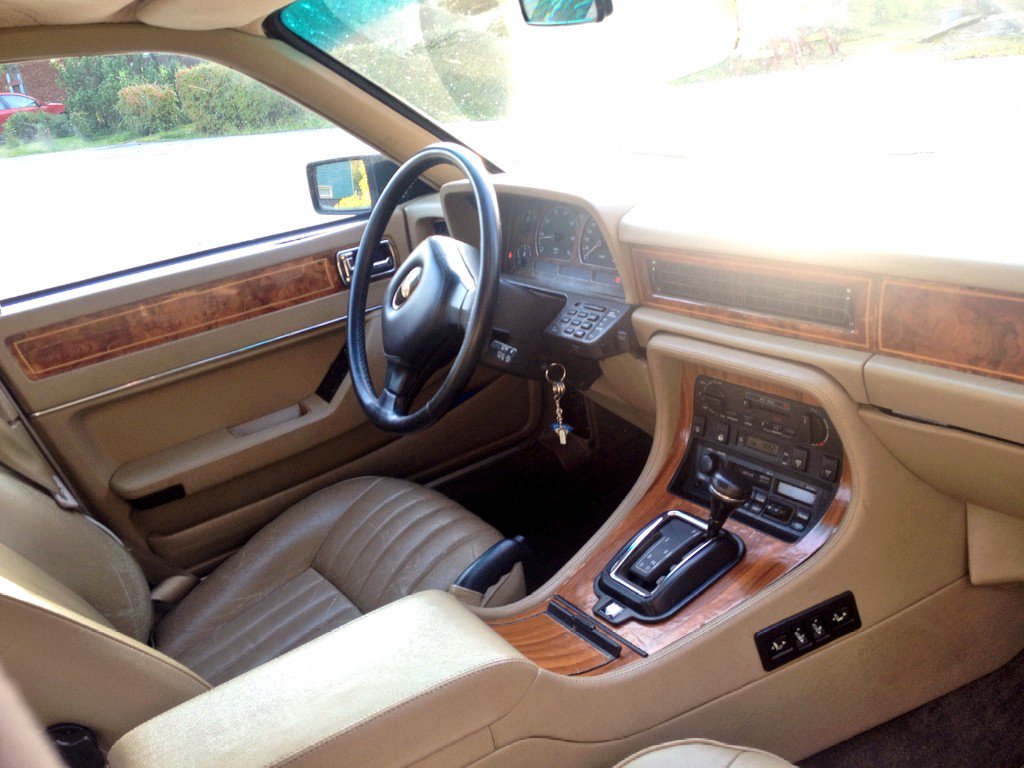 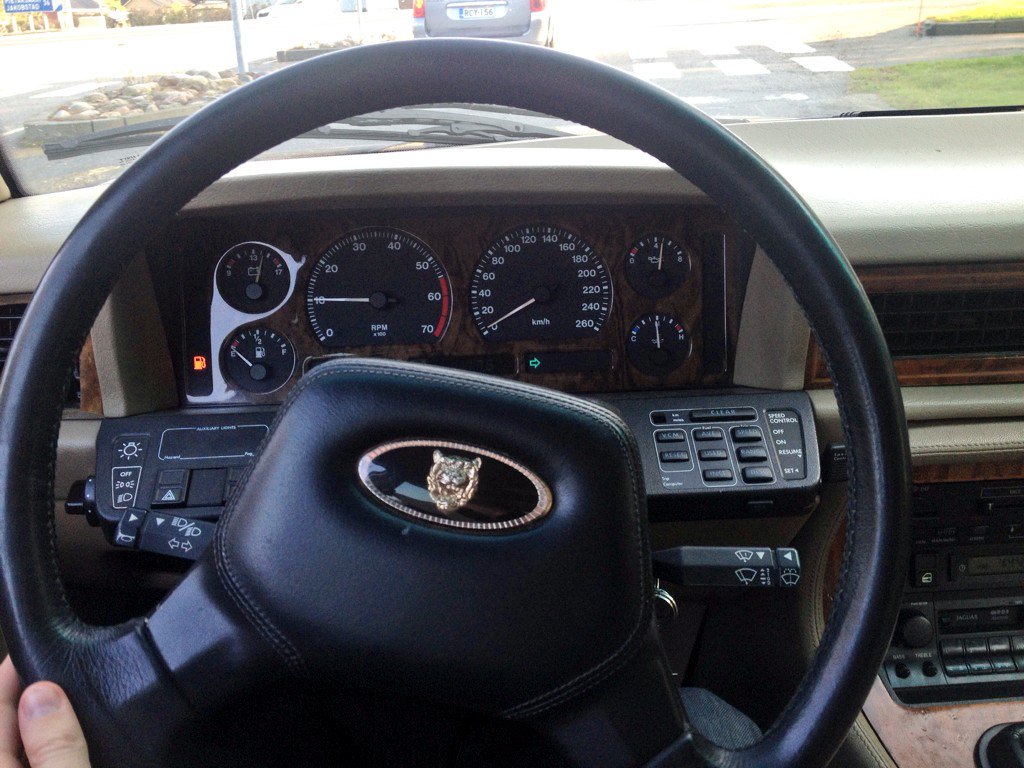 - Barely any of the rust on this car matched ours, no rust on the firewall but the (removeable) rear plate illumination mount was completely rotten
- Steering wheel is too big and unwieldy, made the car feel less direct to pilot
- Despite the dashboard being largely the same, the controls are more confusing
- Fuel gauge was out
- Radio worked, which was weird
- What I expected to be the steering wheel adjuster was the dimmer
- Driver seat only moved backwards, rest of the switches were on central tunnel which is less than ideal
- Headliner replaced with what seemed like felt
- Central locking didn't open the rear passenger door
- Didn't start as instantly or effortlessly as ours, had to be coaxed to life "half-warm" according to the dealer

I believe we were better off with an X300, but I do enjoy the image and appearance of these cars more. If only there was an XJ40 with all the right fixes made :lol:
Anyway, for the money I feel this is a decent buy, if you attend to the small niggles and make sure the A/C works. It's not often that you can say "Oh, it's nice, but we already have one..."

Oh, I forgot one almost confusing thing: the glovebox is where the X300 has the airbag, behind the wooden panel. The X300 in my opinion has such a well-designed, albeit smallish glovebox, that it's weird that Jaguar didn't design a similar one to begin with. The wood was in somewhat poorer condition here, and the leather was about the same.

public said:
If only there was an XJ40 with all the right fixes made :lol:
Click to expand...

If only Jaguar had done something like that from the factory

(was that the joke?)
"Power corrupts. Lack of power corrupts absolutely."
-Redliner, ironically

No, what I meant is that I want the outer appearance of an XJ40 with the controls and other improvements implemented

Oh, this is rather nice.

If you morphed Arron and Dave together, maybe yes :lol:

After new headlamps the Daimler was ready for MOT. I had to postpone the event comically often due to work, as the import related office stuff could only be done before 4 PM. But finally I brought the Brooklands Green beast for official inspection.

This is everything that was left of the car after MOT: Nah, it went fine. Obviously it failed due to few rust holes and rotten sills, but we knew that was going to happen. On the positive side, emissions were fine, chassis was great (even the rear shocks passed, but we're going to replace them) and our US-sourced headlamps turned out to be fully legal. Only surprise was the completely useless handbrake, no big deal. Now the car is legal to drive for one month, after that we need temporary plates to move it around. I hope we get at least rustwork done before that, but now we know what kind of a shed we're welding. Oh, and in typical Jaguar fashion I was rather late for the scheduled inspection time. It felt damn great to drive a big Jag... Daimler in spirited fashion. It's so incredibly smooth.
flickr

I can't help but think the Finnish plates will look so weird on that car :lol:

I really like the white front, yellow rear -style UK plates on that car. I'll do my best to get non-EU plates straight from the beginning, but AFAIK you have to order plates and change them afterwards to continue the Brexit theme.
flickr

Lastsoul said:
I really like the white front, yellow rear -style UK plates on that car. I'll do my best to get non-EU plates straight from the beginning, but AFAIK you have to order plates and change them afterwards to continue the Brexit theme.
Click to expand...

Hmm, I kinda like the black and white look of the basic Finnish plates. Blue just conflicts against green?

Edit: actually, white on black museum plates might suit the car, even if they're completely wrong :lol:
flickr

With the MX-5's registration, I got my short plates on immediately. This might be different since those plates really can't be available anymore and we'll probably have to settle for whatever garish letter combo they foist on us

DMR-686 would obviously be best, but those are probably on some trailer.

Umm.. Correct me if I'm wrong but shouldn't you have sticker plates on it already? Or is it still registered in the UK?
The toys: