Polkky said:
I got this shot taken with my potato

proving that they cut us in line...to the wash. Driving happened during that shot, so sorry about the misplacement of everything.
Click to expand...

A shot of a four-litre car taken from a one-litre one :lol:


Jupix said:
Very cool! I've been "planning" a road trip north also, would like to take the SEC to someplace like Nordkapp or one of the northernmost places we can go to from here.
Click to expand...

You should, and I think I should drive north more often. Just don't think I'll be bringing any of my econoboxes, needs to be a comfortable long distance car
J

public said:
You should, and I think I should drive north more often. Just don't think I'll be bringing any of my econoboxes, needs to be a comfortable long distance car
Click to expand...

Jupix said:
Let's make it happen next year when it can be done with summer tires
Click to expand...

The Daimler contributed to global warming that much, huh?

Nice, nice, cool, awesome, beautiful, epic and then very nice again! This is so cool!
Ajakaamme.net A Finnish website dedicated to driving.

The Daimler has been resting after the long trip to Lapland. We've been waiting the Finnish customs to declare how much tax we have to pay. Last week a I got a letter, which had this blue and very official looking Tulli logo on it.

Gulp, the lottery machine had done it's job. Our estimate was somewhere between 1000?2500 euros, depending on how they value our old shed. Daimlers are generally taxed as Jaguar XJ6s, but you can never be sure. Anyway, these are rather rare cars. That is a problem, as the statistic variations between each Jag/Daimler sold is quite large. You can find few 25 000 euro X308s in the country, and there might be few rotting 5500 euro examples too. All together you can usually find maybe 8?15 cars for sale. It's not enough to calculate realiable average price.

The way the customs calculate the tax is quite simple: first they check the original tax percentage given to the car when it was new (28,5 in our case). Then they guestimate the value of our example by checking the fleet in Nettiauto.com (totally private, but good source if the population is large enough). They take few close calls and adjust the value a bit by milagea etc. I filed a huge number of photos from all of the optical issues with the car, but that was no use. Apparently it's over 20 year old car anyway, so they automatically assume it must be a shitbox.

1288 euros. Pfew, could've been much worse. I've to pay that by the end of the year, then the Daimler is MOT away from being road legal (hello, Posmo and your welding machine). Obviously we're going to file a complaint, it might drop the tax a bit, and it also gives us better chances to fight if the way Finland is treating used imports change in the future.
flickr

I am certainly relieved by the bill. This is a good baseline to start complaining
Threads: Panda, 7, LS400, Daimler, Kawa​

Yeah, as far as I know you can't fail in the complaining, the price can't go up.

So far the only case where I haven't complained has been my 406 Coup? ? despite of all the papers stating it's almost three times more expensive Coup?, the final tax bill was in line with the V6 sedans :lol:
flickr

Awesome car! I do find it absurd that a EU country can have import rules like that, what happened to open borders and free trade?

Nothing happened, Finland is happy to follow the rules as long as it is beneficial to our country. Taxes from cars generate billions of euros every year, so ditching that? No.

If you import "normal" car, you can estimate it pretty well, it's only these more rare vehicles which are a problem. And if you want to cancel the process, you've to pay compensation. As far as I can remember, it's 150 euros plus like 5 % of the tax. So you can't try.
flickr

Yeah, the bill is way less than we feared, but more than would be nice to pay :lol: I think they guesstimated the car to be a 6k car here, which is not the case. So, complaint it is!

A few words of the GT trip!

The Daimler is getting famous! Great read too. Hopefully I'll have time to watch the episode soon.
flickr Inside every aristocrat lives a hooligan. Straight six wailing, quarter of a turn lock on the wheel, great fun!

Daimler got temp plates for the weekend, as we can't get regular number plates until it passes MOT check. As the weather was pretty much perfect, we decided to take few pictures of the car. Naturally before we got to that the sun went down, camera ISOs went up etc. public had a funny oversized chauffeurs cap, which I naturally had to try!

Anyway, the conclusion of our little scientific experiment: even on snow it hides its weight really well. Steering offers reasonable feel, natural responses and plenty of lock. Longish wheelbase makes it really relaxed, it keeps the desired angle pretty well even without LSD. Obviously such a device would help a lot.
flickr 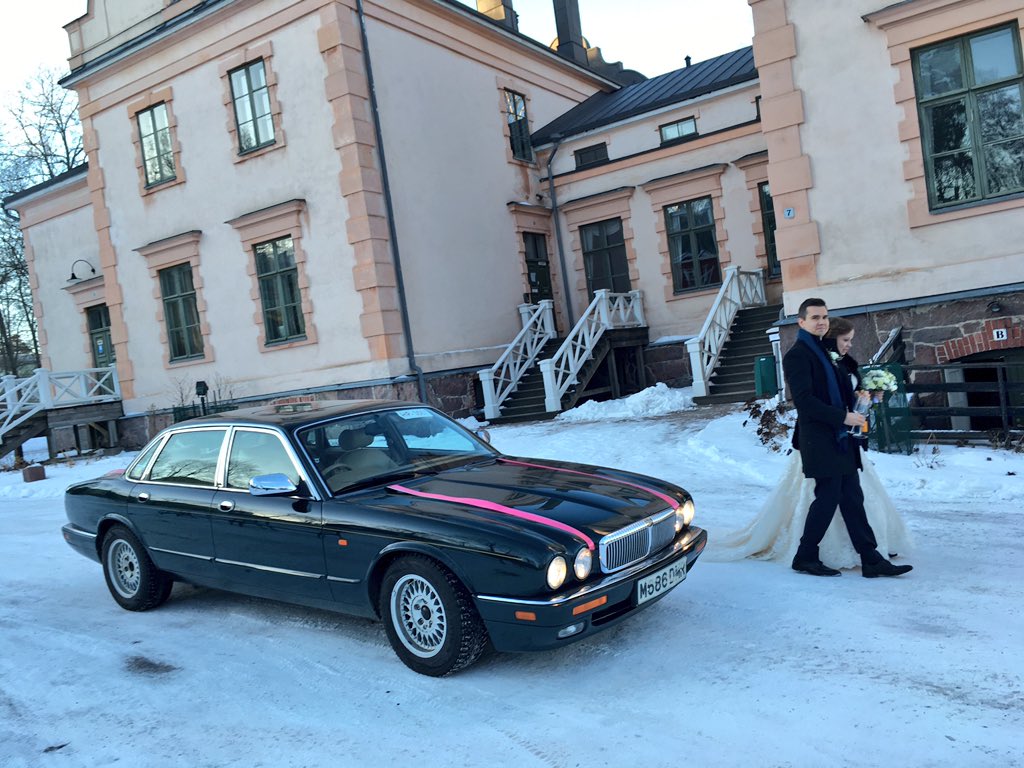 The Daimler performed its wedding car duty impeccably. It's great to be back in it, and it can move in an absolutely dignified manner when asked to, doing the service it was bought for two decades and thousands of pounds earlier. I decorated it very simply with just some silver and pink tape, and a big white heart drawn on the rear window. 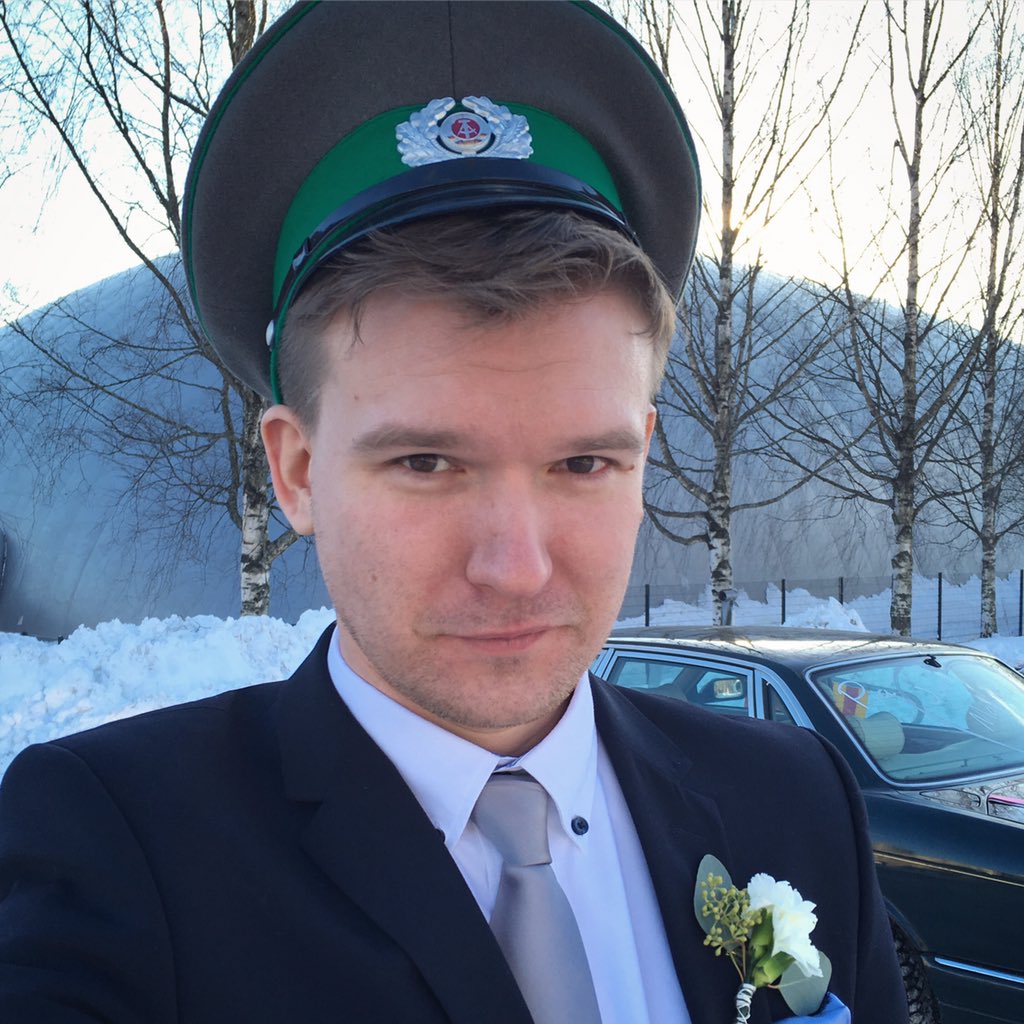 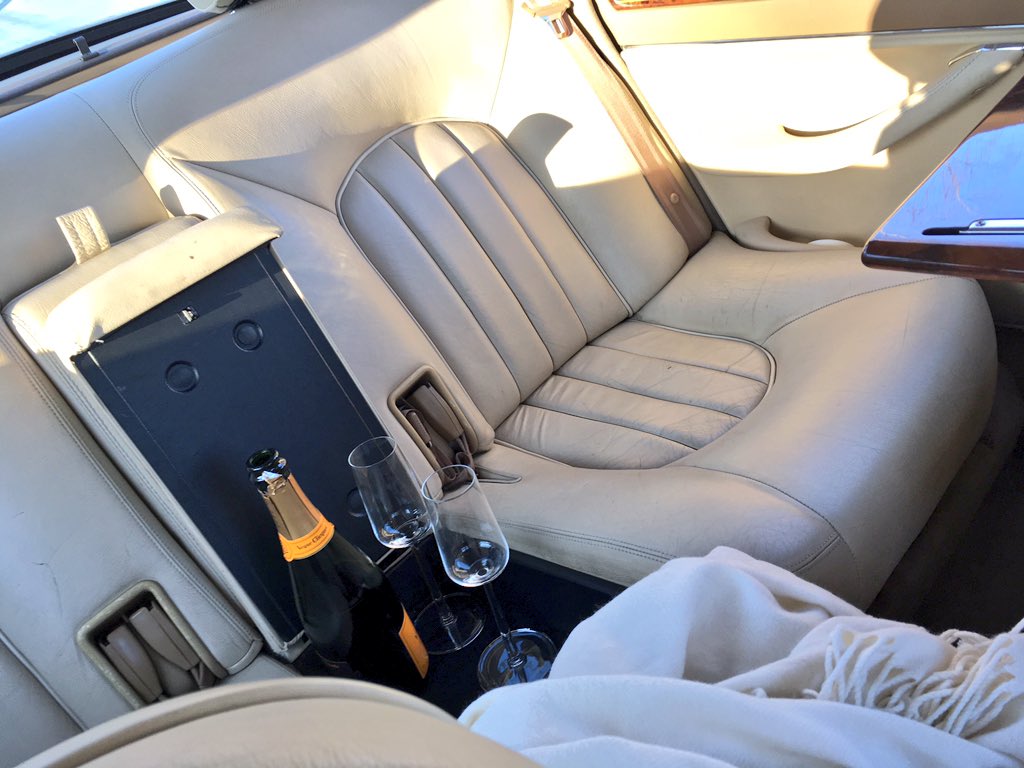 The sticker plates run out today, so I'll wash it and return it to the garage tonight. Every occasion with the car is a special one, and the Dire Straits tape and the smell of the leather interior took me way back to Scotland again the first minute I drove it.

Well the Not-a-Jaag is certainly not living a boring life in Finland... Nice pics

Would you like another one?
WillDAQ: To use the technical terms: "the Mustang is to aerodynamics what horse shit is to fine dining"

That's excellent, always nice to find out some history about a car. Some guy just randomly commented on a YouTube video of my old Smart saying he was the first owner and returned it under warranty. The benefit of UK cars keeping the same plate.

Anyway it must be about time @public gave us an update on this if it's still around.