Ownership Verified: Out with the hairdressers car. In with the Pony!

Well, the saga comes to an end. Before I get to the Mustang, lets recap the last few days with the Audi.

First Wednesday, when I started the purchase process

CrazyRussian540 said:
Godammit. The TT just died on the way back from the dealer. Its clearly angry at me. Sitting in some random parking lot waiting for AAA to come help. Was driving when all of a sudden the batter light came on, then 5 seconds later dash lit up like a Christmas tree. Pulled off into some random parking lot, and now stranded. It just had to happen right now. SABOTAGE!

Got it towed back to my apartment. Had my buddy jump it to get to the parts store half a block away. All my electronics died along the way but I made it anyways. Had the guy test my battery. Discovered it was a a paperweight. But the reason for this was mind blowing. The panel on top of my battery (still never figured out what it was) shorted and melted itself and killed the battery.
So the solution? Got a new battery. Covered that melted wire end with electrical tape. Tucked it away where it wouldn't be a problem. And hoped that it would start. It did. Drove away without a problem.
Click to expand...

CrazyRussian540 said:
Audi in at local VAG shop for emergency repair since my alternator isn't connected at all to my battery right now and theres a hole melted through the fuse box. They weren't surprised at all when I described what happened.
Click to expand...

So they "fixed" it. Wired up a bypass for melted fuse. So then I drove to work. Drove to the Ford dealer. Had to run home to pick up my title and check book. Got the car back on the highway to the Ford dealer.... and it started dying. Barely made it off the highway to some random gas station. Clearly the alternator was dead. Had some guy jump my car, and barely made it to an autoparts store 1 mile away. Pulled the battery out, gave it to them to quick charge. And finally made it to the dealer. What a long day. Finished the paperwork and then.... the fun bit! 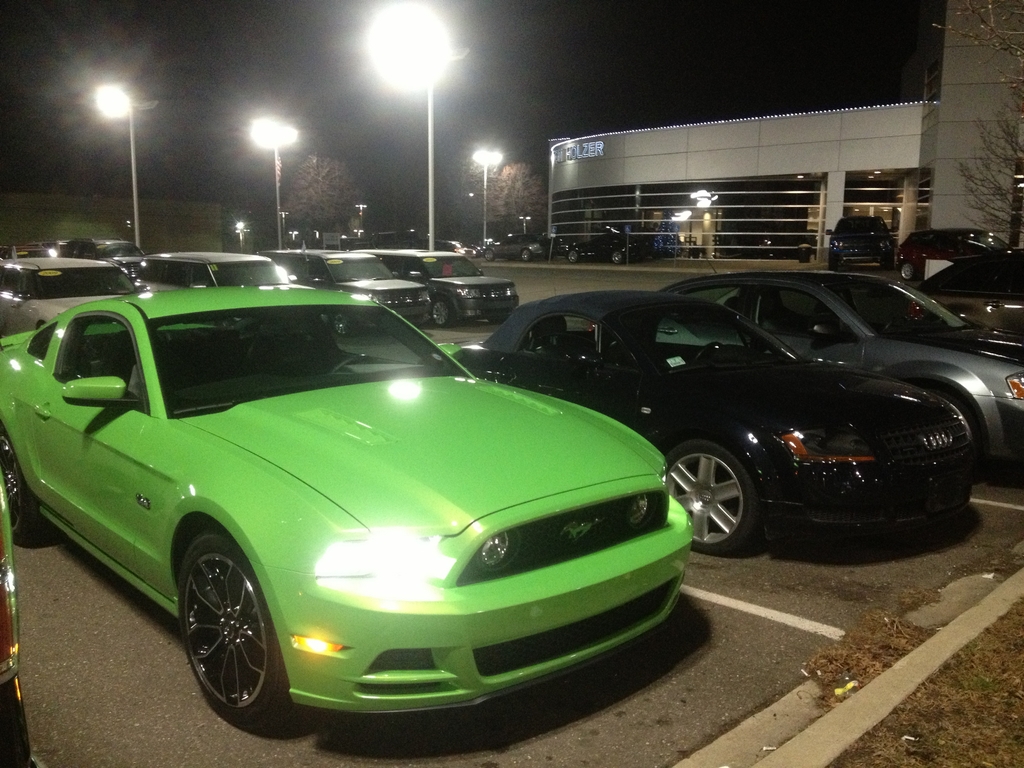 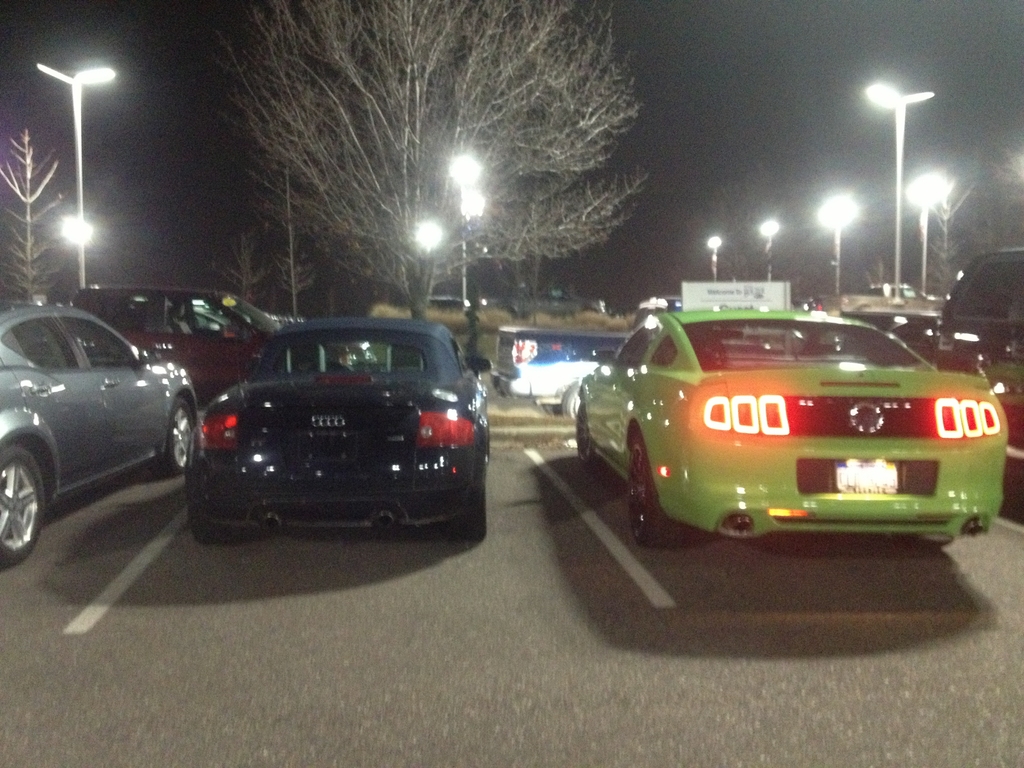 And 25 miles later at my apartment complex

Then today, on my way home form work, one of the dealers I was dealing with asked to see it because they've never seen a green one in person and wanted to see if they should order one. When I got there, naturally I had to park next to my cross-town rival. :lol: Don't mind the shitty parking. Was my 3nd nose-in parking job. 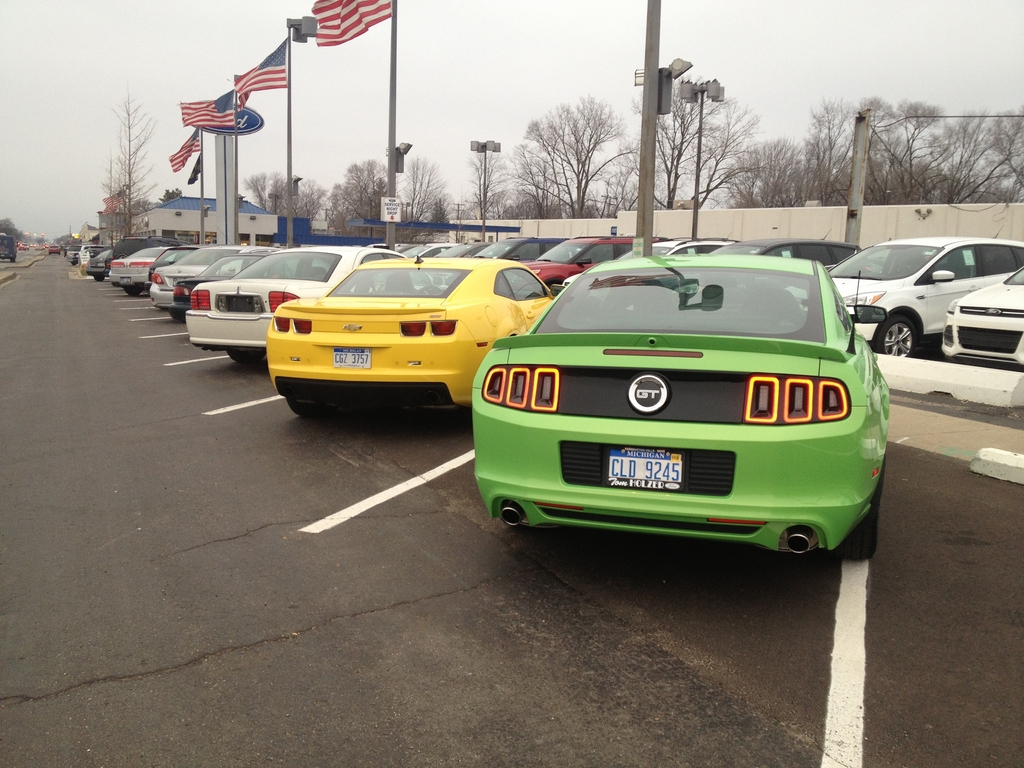 And now pictures! The lighting was terrible today, and I was using my iPhone, so these are the best I could do. I'm going to ask a buddy of mine who is really good at photography to take some nice DSLR pictures later. 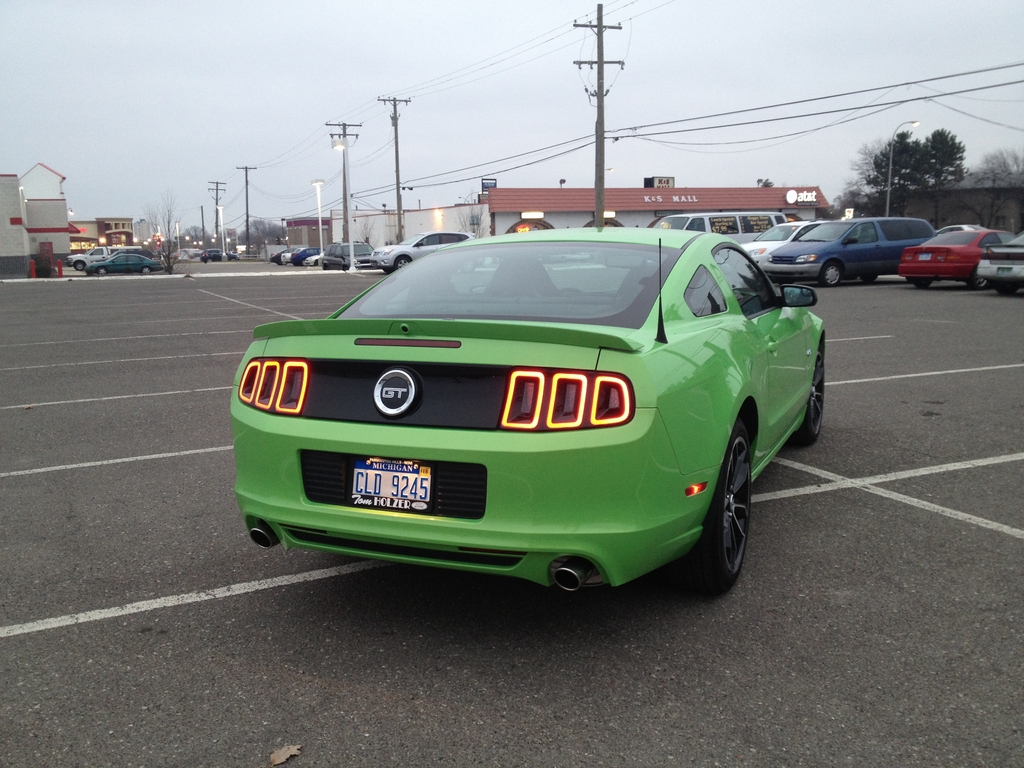 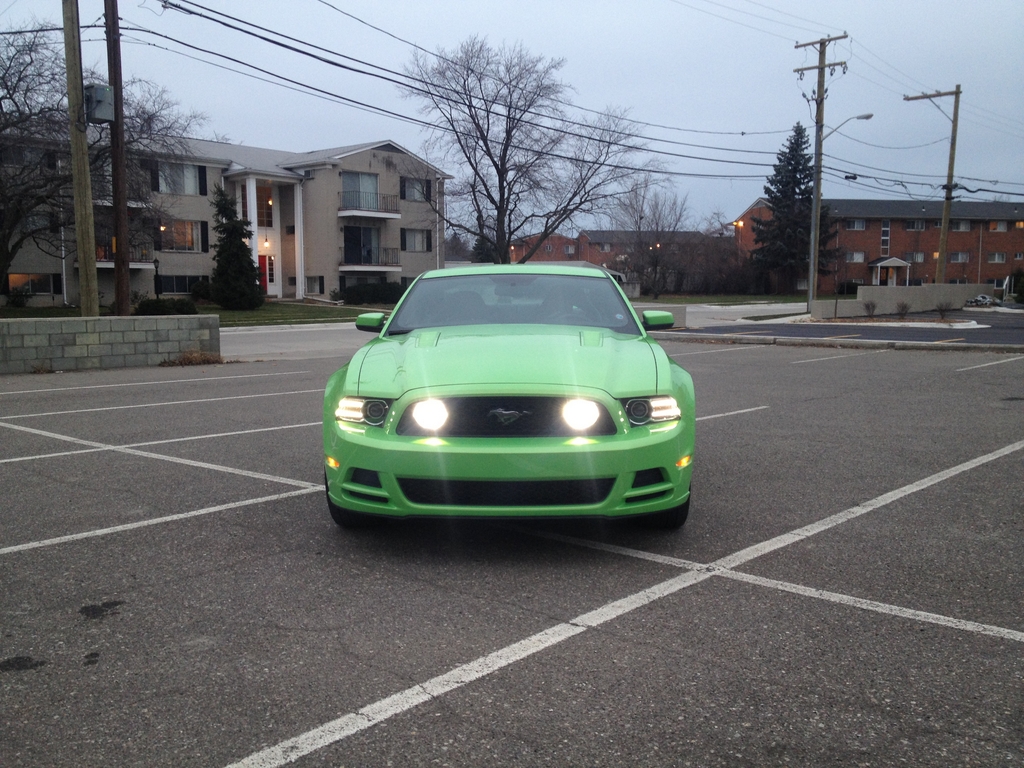 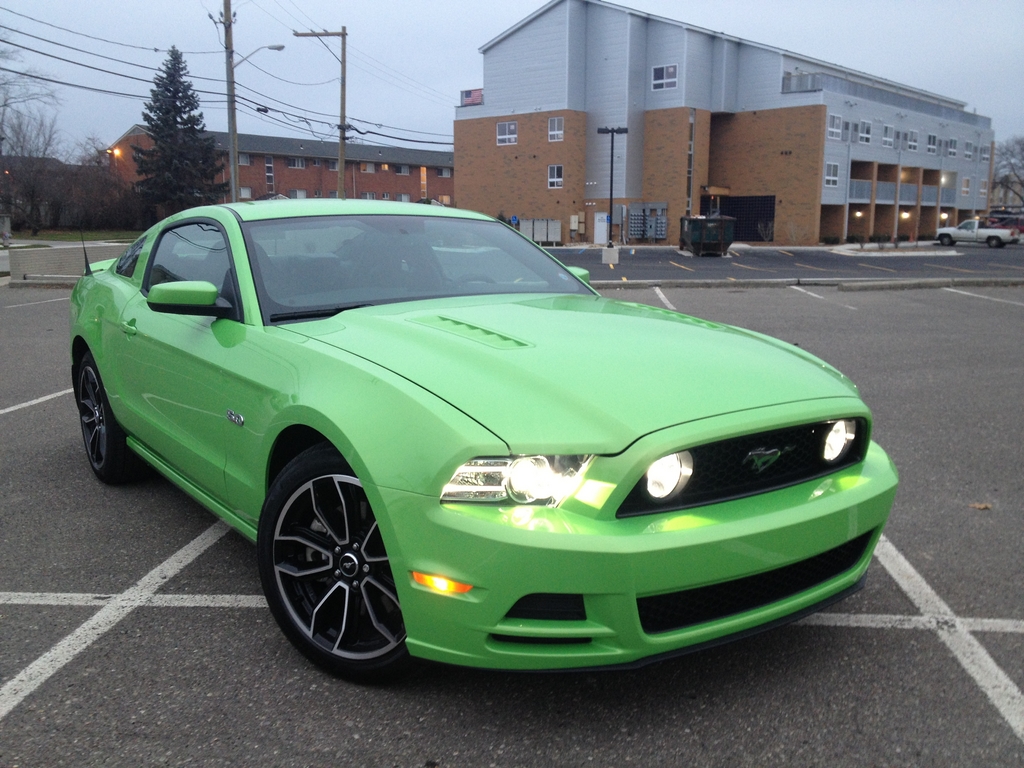 And no, I do not drive with my fogs on. 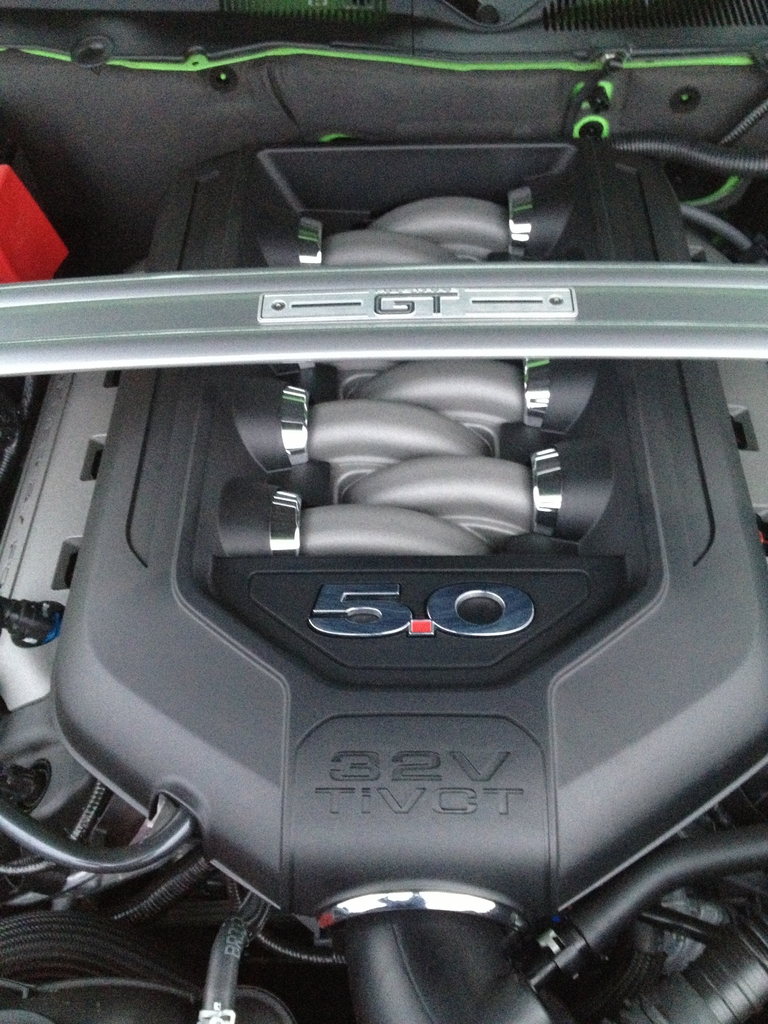 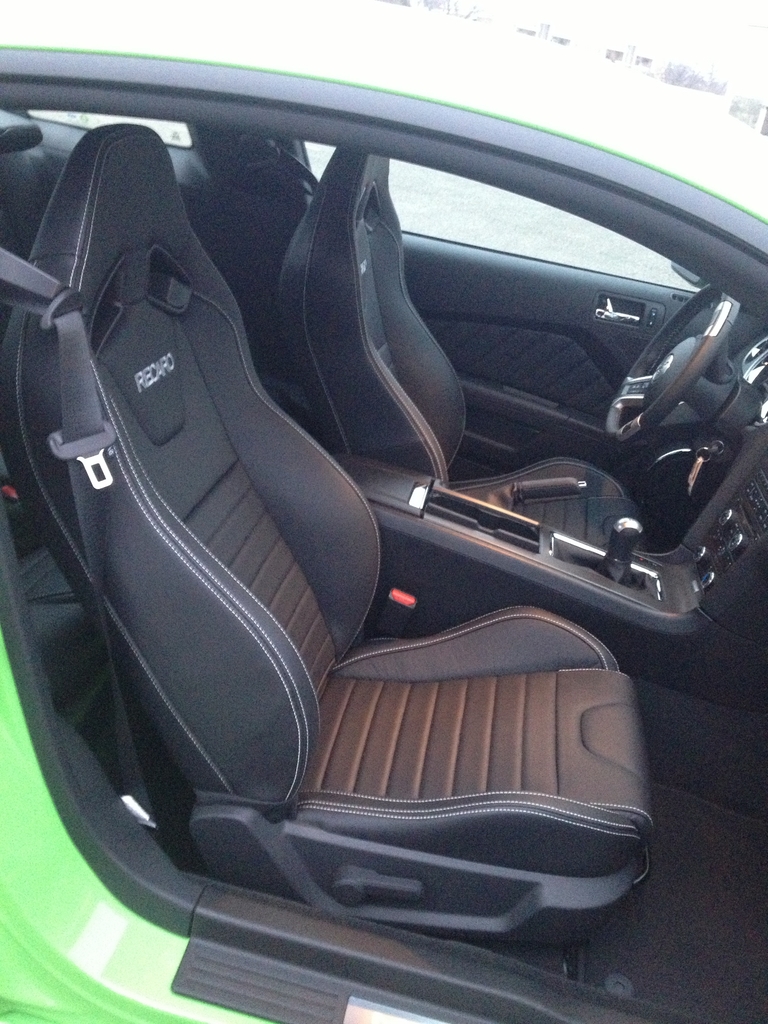 Totally don't regret getting those seats. 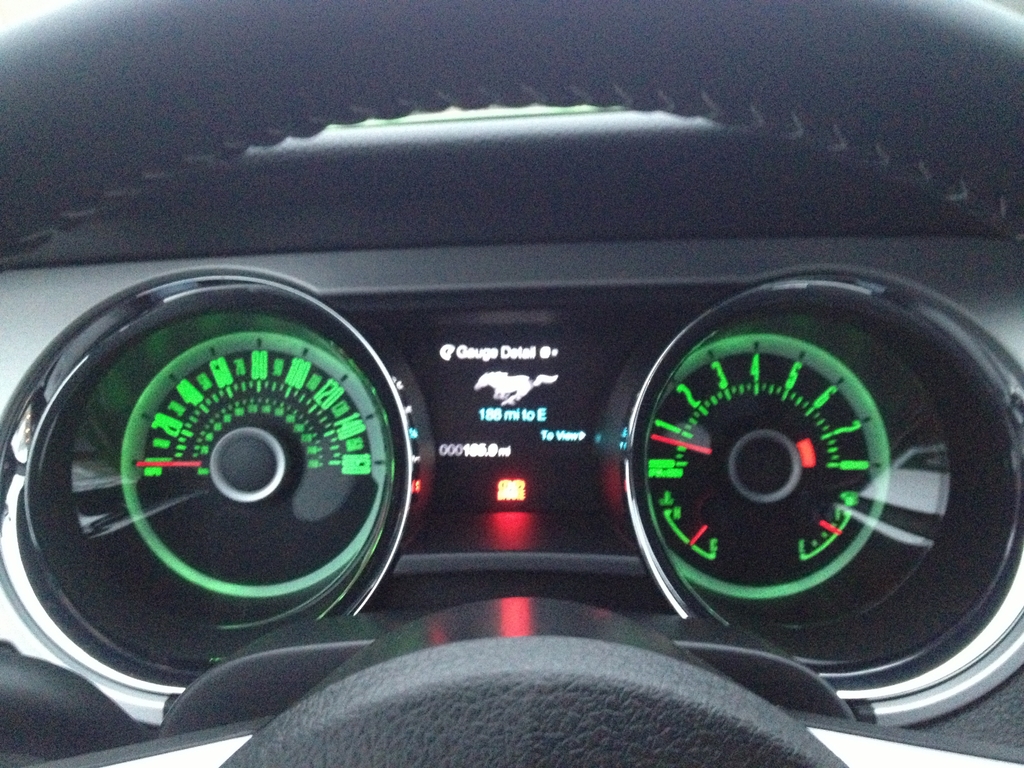 Immediately set all my gauges/ambient lights to green. Gonna experiment with other color combos later. 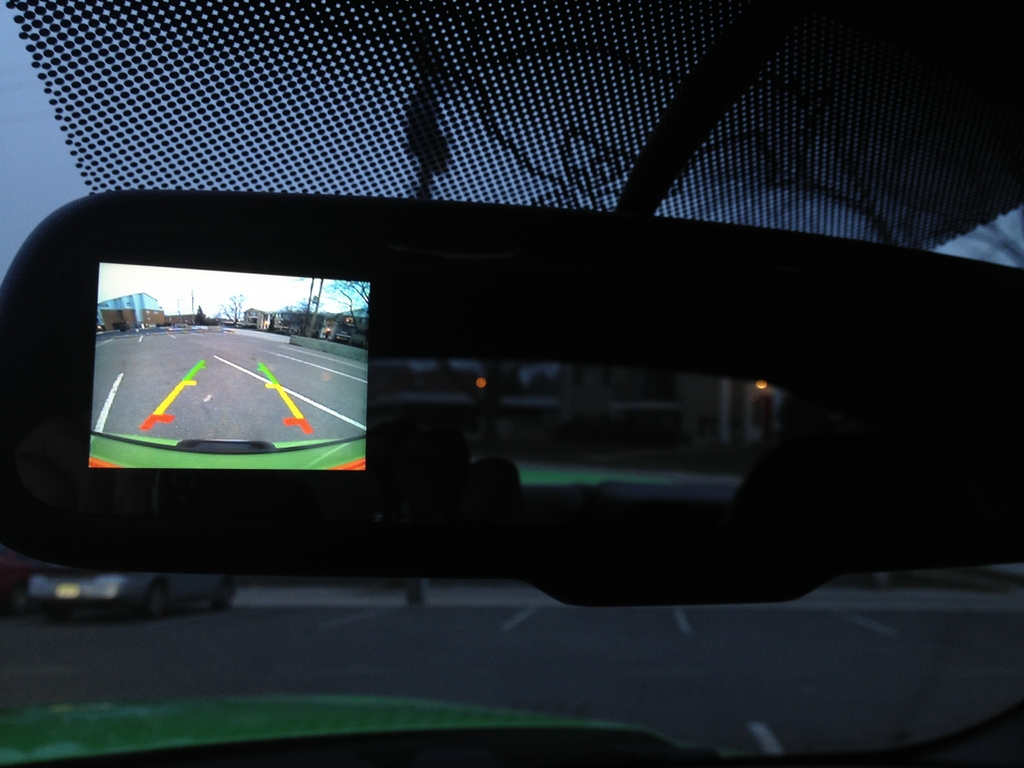 The way the camera display works in the mirror is actually really cool. Completely invisible when its off. 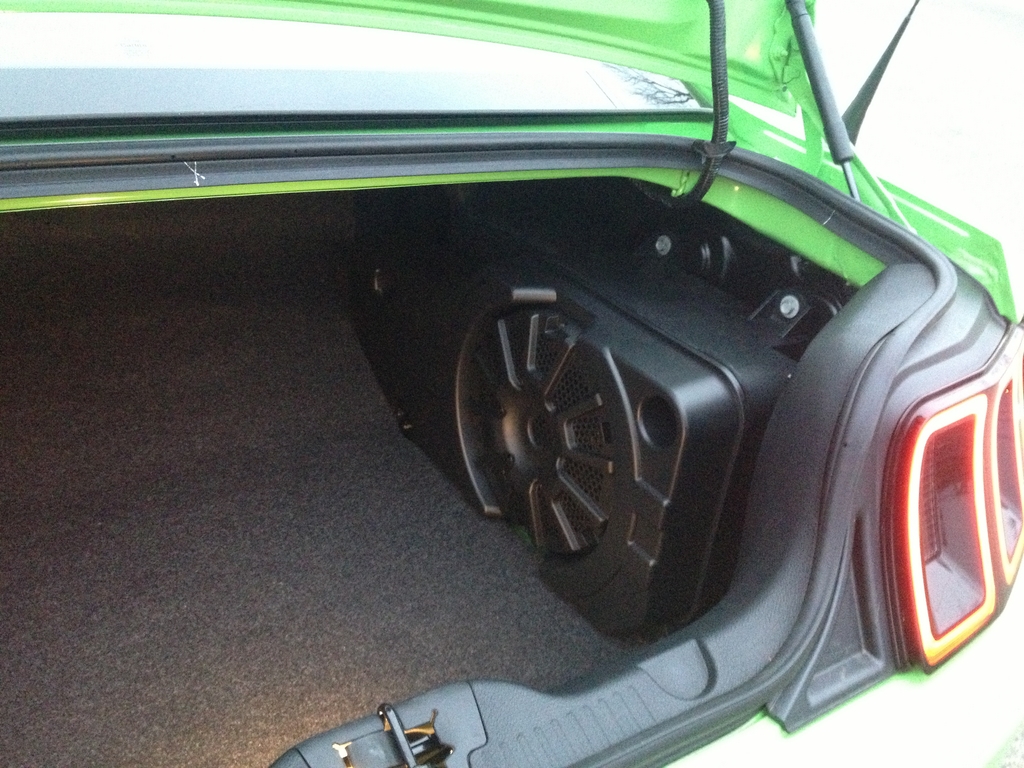 Was really surprised at the size of that subwoofer. Totally could live without that.

And the proof pic 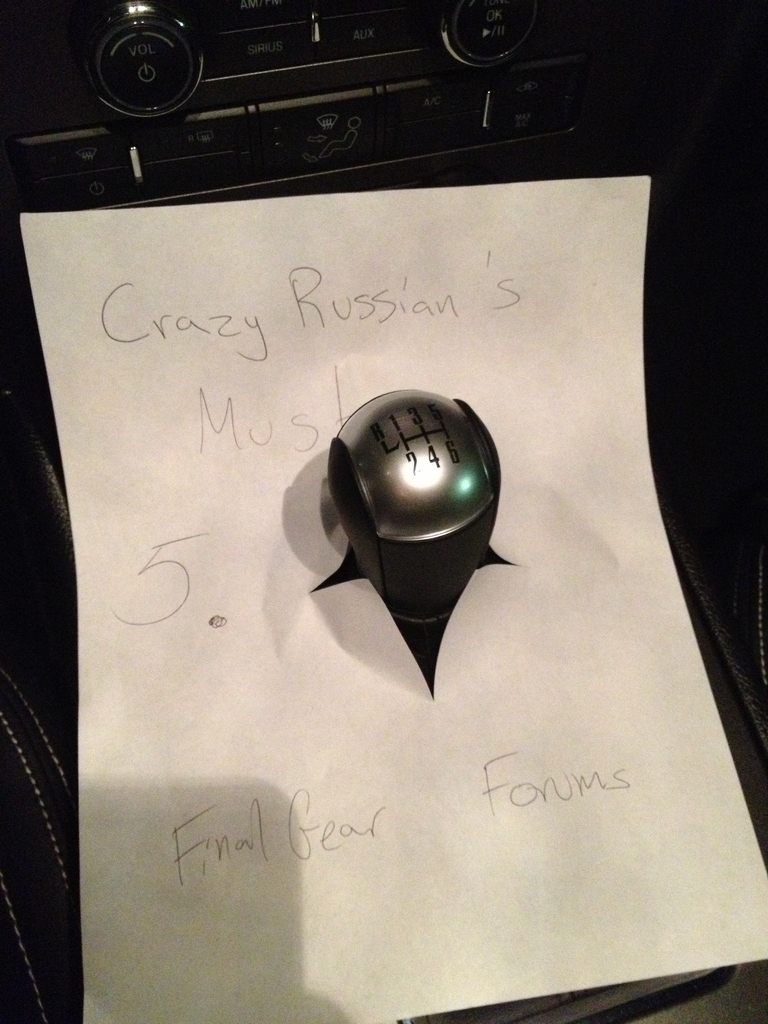 I approve of this. But you already knew that.
Where are we going and why are we in a handbasket?

Congrats!! It looks amazing! I notice you got it from Tom Holzer. Thats the dealer that we take my moms escape to for service. Great dealer.

I approve as well. But then, I am a bit biased.

I love those gauges! Mine have the whole background illuminated. I would love to be able to just illuminate the numbers like that. And I told you that subwoofer was big! Luckily, it comes out pretty easily.


Sevs753 said:
Have you done a good Ol' fashioned 'MURICAN burnout yet?
Click to expand...

And so it begins.
People ask me that question, too. I tell them to give me the money for a set of tires and I'll do it.
Last edited: Dec 1, 2012
Pudding can't fill the emptiness inside me! But it'll help.

LOL, so even the dealer's fix couldn't keep the Audifail from returning. Great German engineering there... It was also amusing to watch the haste with which you suddenly switched cars when the Audi suddenly started disintegrating.

Your new car is cool. And stuff. I really approve.
#carmagnum

Congratulations, very nice indeed
- Alright you Primitive Screwheads, listen up! You see this? This... is my BOOMSTICK!

Oh, I forget to tell you - get ready for a lot of smiles and admiring looks.

Now I know you're used to getting admiring looks when you had the TT. The difference this time is, those looks will be coming from women.
Pudding can't fill the emptiness inside me! But it'll help.

I'm jealous, though I don't like the color one bit. If I was in the market for a pony car, the Mustang would be my first choice, but I would be holding off till the new one with an IRS comes out.
The Mighty Buick Of Destruction.

Spectre said:
LOL, so even the dealer's fix couldn't keep the Audifail from returning. Great German engineering there... It was also amusing to watch the haste with which you suddenly switched cars when the Audi suddenly started disintegrating.

Not so much great German engineering but a horrible job at fixing it...
​

Out with the hairdressers car. In with the Pony!


sifu said:
Not so much great German engineering but a horrible job at fixing it...
Click to expand...

And why did he have a problem in the first place, necessitating the fix attempt, hm? 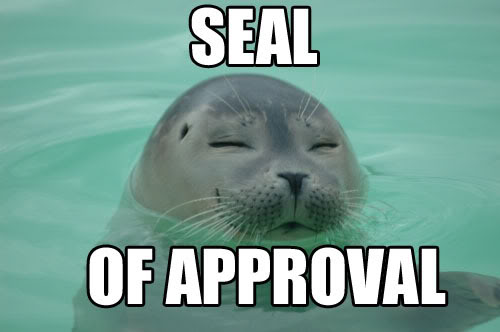 Spectre said:
And why did he have a problem in the first place, necessitating the fix attempt, hm?
Click to expand...

Well, it?s Audi, not the Pope. Both German but only the Pope is infallible

German-car-hating talk aside - I?m really surprised at how well the Mustang looks even in that color. This green you expect it to look awful, but it still looks very good. Well done, hope you have a lot of fun with it.

I can't wait to see the stripes! I've always wanted a car that can pull them off without looking douchey.


CAPT_Howdy said:
And so it begins.
People ask me that question, too. I tell them to give me the money for a set of tires and I'll do it.
Click to expand...

When I was 17 I got to drive a friends Mustang GT and accidentally left a long posi strip across the road as I took off. To be fair, my DD at the time was an underpowered non-turbo Saab so this thing caught me off-guard.
2017 Honda Accord LX 6MT
2005 Honda VTX1800R
2007 Suzuki V-Strom 650
You must log in or register to reply here.
Share:
Facebook Twitter Reddit WhatsApp Email Share Link
Top