Ownership Verified: Plug Me In, Daddy - Another Tesla Model 3 Performance

Shiny blue toys are the best!

I concur. The Octavia is anything but shiny right now.

Had my first chance to supercharge today. Got to use some of those free miles before they expire.

I had no intention of letting the battery get so low, I went a few exits up the motorway to pick up a cassette deck (don't ask) and intended to go past my normal exit on the way back to the closest supercharger. There isn't a 'local' one yet, it's on the list and would probably be done if we hadn't had the Covid situation. Anyway the southbound carriageway is closed all weekend, I didn't check beforehand because I'm an idiot so had to choose between a long detour to get to that one or the next closest.

Maybe I have a heavy right foot but I'm not afraid to say I was a little nervous!

Also grazed a wheel on the kerb when I got home trying to go around someone pulling a stupid manoeuvre outside the house, I don't know where they came from but they couldn't drive their massive MB estate for shit and then buggered off. Livid with myself, I knew they were vulnerable and I've been very aware when driving normally but when people do weird shit and distract me this kind of thing happens. I wanted to put Alloygators on and my route today took me past the town I will visit to get them fitted but it hasn't happened yet. I'll get it touched up, get the rim protectors fitted which will hide the damage and get it repaired at a later date...

The first scratch is always annoying, but it is also nearly inevitable.

What are rim protectors?
A tire with some sidewall?

Curbing those 20" is nearly unavoidable... they scratch from the smallest touch of a curb. The tires offer zero protection. I have also hated myself a lot the first time I scratched one, but eventually accepted it. At least on the silver wheels it's only visible up close

If/when you install rim protectors, do share please. I might do the same eventually, get the couple scratches mine have already collected fixed up and protect against future damage.

This is the one I'm going for, in black:


I don't have the facilities to fit them myself so will be getting an approved fitter to put them on.

I really don't like the stick on ones that every Tesla accessory seller has, I've read that they can come unstuck while driving and flail around taking the paint off the wheelarches. No thanks!


bone said:
What are rim protectors?
A tire with some sidewall?
Click to expand...

After years of this on everything I've owned I'm finding it really hard to train myself to keep the wheels in mind, fear of damage has worked up to a point. I don't think there are any tyres at this size with chunky sidewalls.
Last edited: Jun 11, 2020

Went on a rescue mission today to provide charge to the dead battery in my sister's diesel Clio. Carrying a battery charger in an electric car feels wrong.

Also found out today that Autosteer hates having merging on the motorway into a lane beside a lorry. For example, if I'm in lane three having just overtaken a car in lane two, auto-merging to lane two with a lorry in lane one causes the car to freak out. I'm learning to wait until I have passed the lorry before merging in.

Matt2000 said:
Also found out today that Autosteer hates having merging on the motorway into a lane beside a lorry. For example, if I'm in lane three having just overtaken a car in lane two, auto-merging to lane two with a lorry in lane one causes the car to freak out. I'm learning to wait until I have passed the lorry before merging in.
Click to expand...

Interesting, I've never noticed anything similar. Only weird behaviour around trucks used to happen last year, when it would hug the opposite edge of the lane away from a truck or bus, and sometimes move to/from the edge rather unsmoothly - that seems to have much improved recently though, it happens rarely and the transition from lane center to edge is barely noticeable. Either HW3 is reacting much differently from my older HW2.5 setup, or there's something different about RHD Autopilot logic vs LHD. What software version are you on where you're seeing this?

I'm on 2020.16.2.1, a little behind it seems but I don't think I have it set to advanced updates. Quite possibly a RHD issue but there's an Aussie guy on YouTube who doesn't seem to have an issue. I need to look in the settings for navigate on Autopilot as it isn't available to me, I thought it was a UK limitation but I'm not sure.

I also need to look up error reporting and if you can report errors in mapping because I'm frankly shocked at the number of incorrect speed limits on the maps. I've had a few occasions where the car is confused as to whether or not I'm on a dual carriageway, granted I've only been on two longish drives in the car and it still only has 555 miles on it but it seems odd.

Mine is on 2020.16.3, updates tend to take a moment usually - the US cars are almost always a version ahead or so.

Yeah, speed limits are all over the place in the map data. You can use "bug report" as a voice command, but it's unclear whether it actually does anything. I've reported about 10 instances of wrong limits around where I live, 2 or 3 have been fixed, others remain. It should improve massively once the speed sign recognition is rolled out, which is apparently imminent: https://www.reddit.com/r/teslamotors/comments/h7a8ws

There's a good overview of the current software version distribution on TeslaFi: https://www.teslafi.com/firmware.php

Version 2020.20.12 is nearing 30% install base, which is close to where I usually get the "update available" notification. It seems they deploy new versions batch-wise, not to all cars at once, and it depends on location and vehicle configuration as well as the update setting ("normal" or "advanced"). However, so far I'm sitting on the somewhat uncommon 2020.16.3, and the car states it's up to date. Oh well

I probably should get TeslaFi, I got the Stats app and that's great but there is so much more to gain from TeslaFi.

Matt2000 said:
Due to the lockdown I still can't drive this anywhere but I can sit in it for work team meetings on MS Teams. Made my most meaningful contribution. 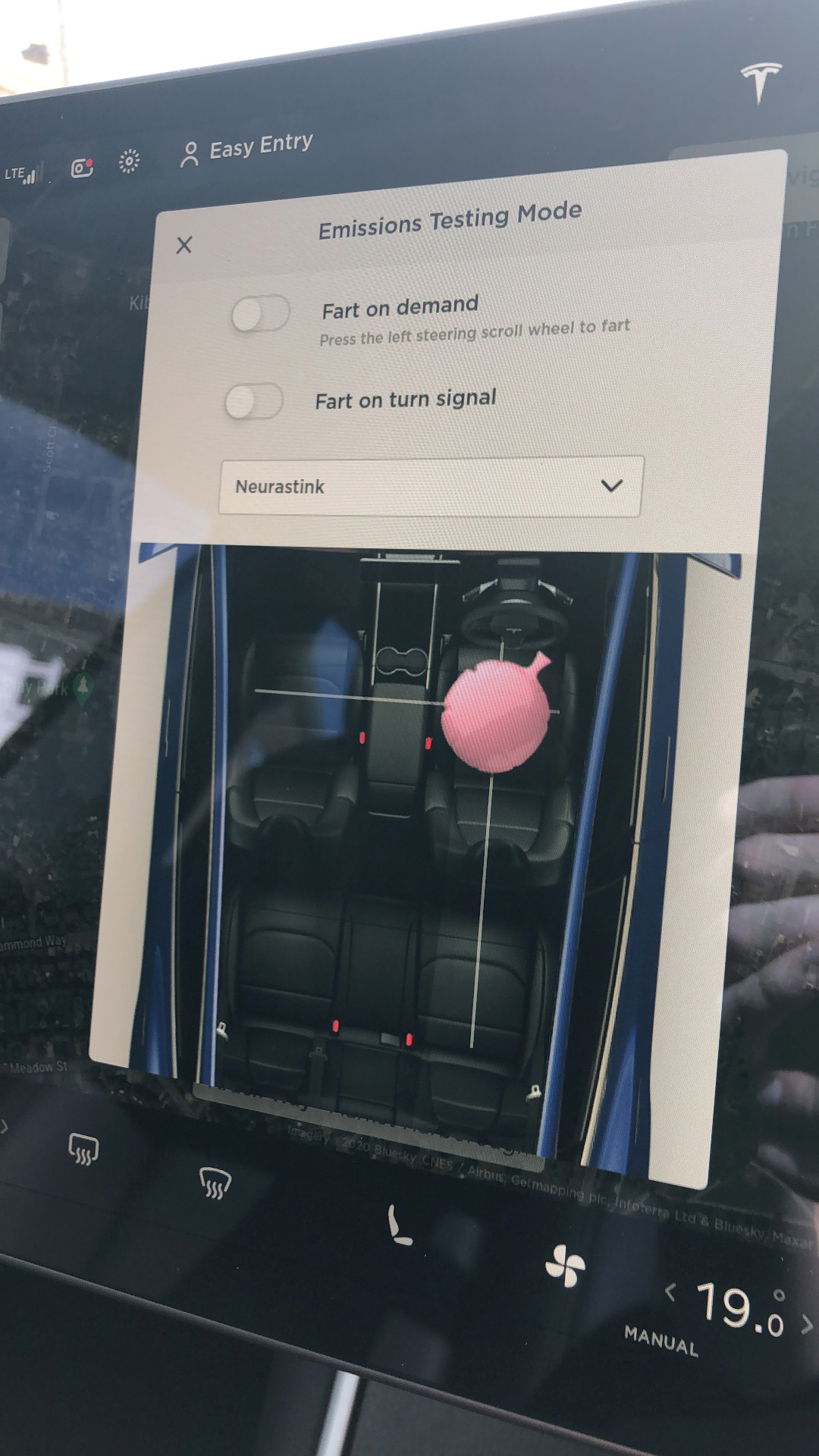 Also updated to the latest software version 2020.12.5, a little slow using my phone as a hotspot but I imagine an equivalent download would complete during a normal commute.

Oh, and I had to clean some bird dirt off the glass roof already. Damn birbs!

That's the greatest feature. Bringing a girl back to your place after an evening at Macho Tacos, "it wasn't me, it was my car. See!".

Matt2000 said:
I probably should get TeslaFi, I got the Stats app and that's great but there is so much more to gain from TeslaFi.
Click to expand...

Get TeslaMate: https://github.com/adriankumpf/teslamate! Self-hosted, so no need to share your Tesla account credentials with anyone, and does almost everything and in some respects more than TeslaFi. Also integrates with a smart mirror

I'll give that a go, thanks. Should run well enough on my Windows server. I've briefly dealt with Docker before, the name always amuses me. Above all, free is my favourite price!

Still not driving for work so I took Nebs out for some exercise yesterday. This is a local viaduct, they still run steam trains over it occasionally. 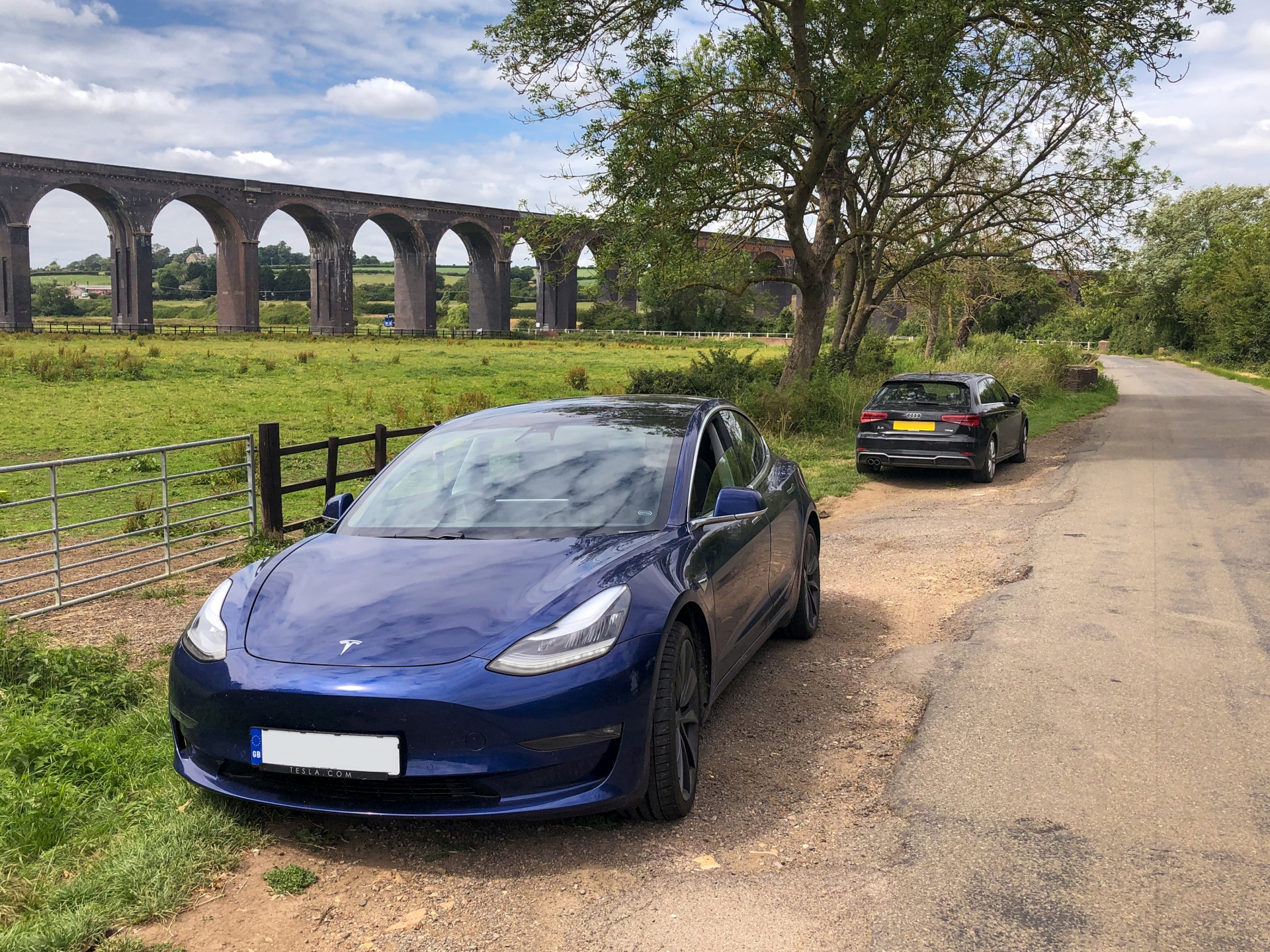 Great fun chucking it around the roads I used to drive in the Smart, it certainly gets out of corners faster than that little thing did and really holds on. First time I'd used the sports steering setting and it's very firm and quick, something the Smart really lacked. I spent a bit of time swearing at it for not syncing my new playlists from Spotify and not recognising what I was asking it to play, but that's not really a big deal.

I can tell you from TeslaMate that I was driving for exactly 1 hour and 34 minutes, that's a superb bit of software that happily runs on my Windows server and gives me tons of data. As I mentioned in Random Thoughts, cabin overheat protection kicked in last week and drained the battery. Without this logging I would've been scratching my head as to why it did it.

One more thing, I had the dashcam recording yesterday and it produced a nice selection of clips. I intended to edit them together just for shits and giggles but they all seem to be out of sync with each other, the front camera drops a bunch of frames between every clip too so it's impossible to sync them up. Well, it's at least more effort than I'm prepared to put in.

Oh yes, I'm still waiting for my touch-up paint, once that finally arrives I can get the Alloygators installed. Hoping to do that before I get called back in to work.

Car insurance is confusing but sometimes it goes your way. I set up the insurance for Nebs with 0 years no claims (it was on Bugsy) and 15k miles for the year. A month ago I submitted the proof of no claims when I sold Bugsy and my weekly lockdown miles for a discount. They never got back to me.

Long story short, they didn't want to give me much back and unless they pull a magic rabbit out of their arses (they still can't tell me the refund amount for reduced mileage) I'll be going to a new insurer on Friday with £300 in my pocket and getting better cover for a fresh 12 months. The daft thing is it's the same underwriter as before but a different broker.

In other news, as posted on Telegram the scene in my signature has come true. Both are plugged in again today as I know Bob was low on juice from sitting and I need to move it to do the brakes this week. 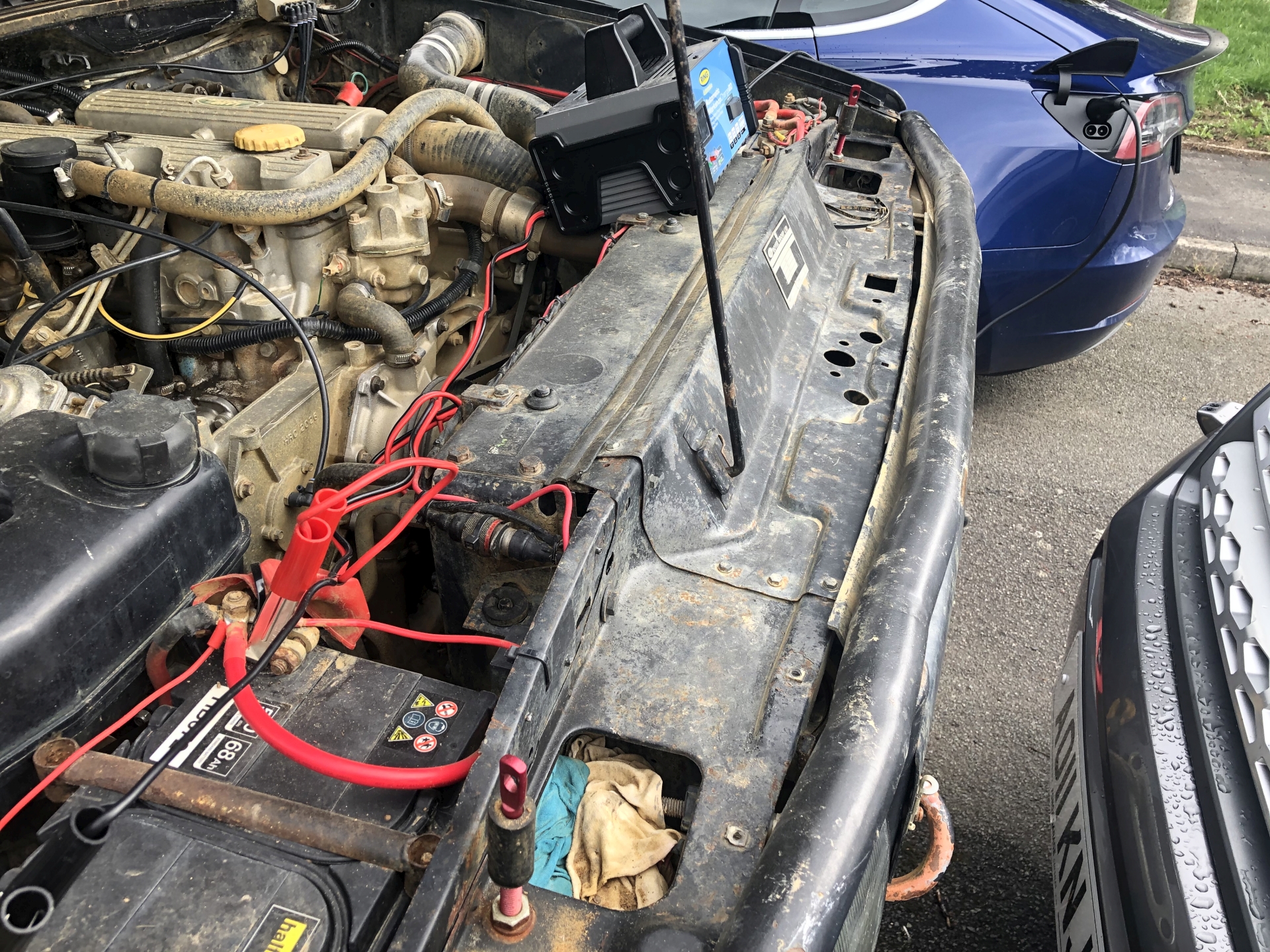 Also finally received the wheel touch-up paint from Lithuania. It's called Tesla 'steel grey', no idea what that colour is but it's close enough and it'll be covered over by the rim protectors I'm having fitted tomorrow anyway. 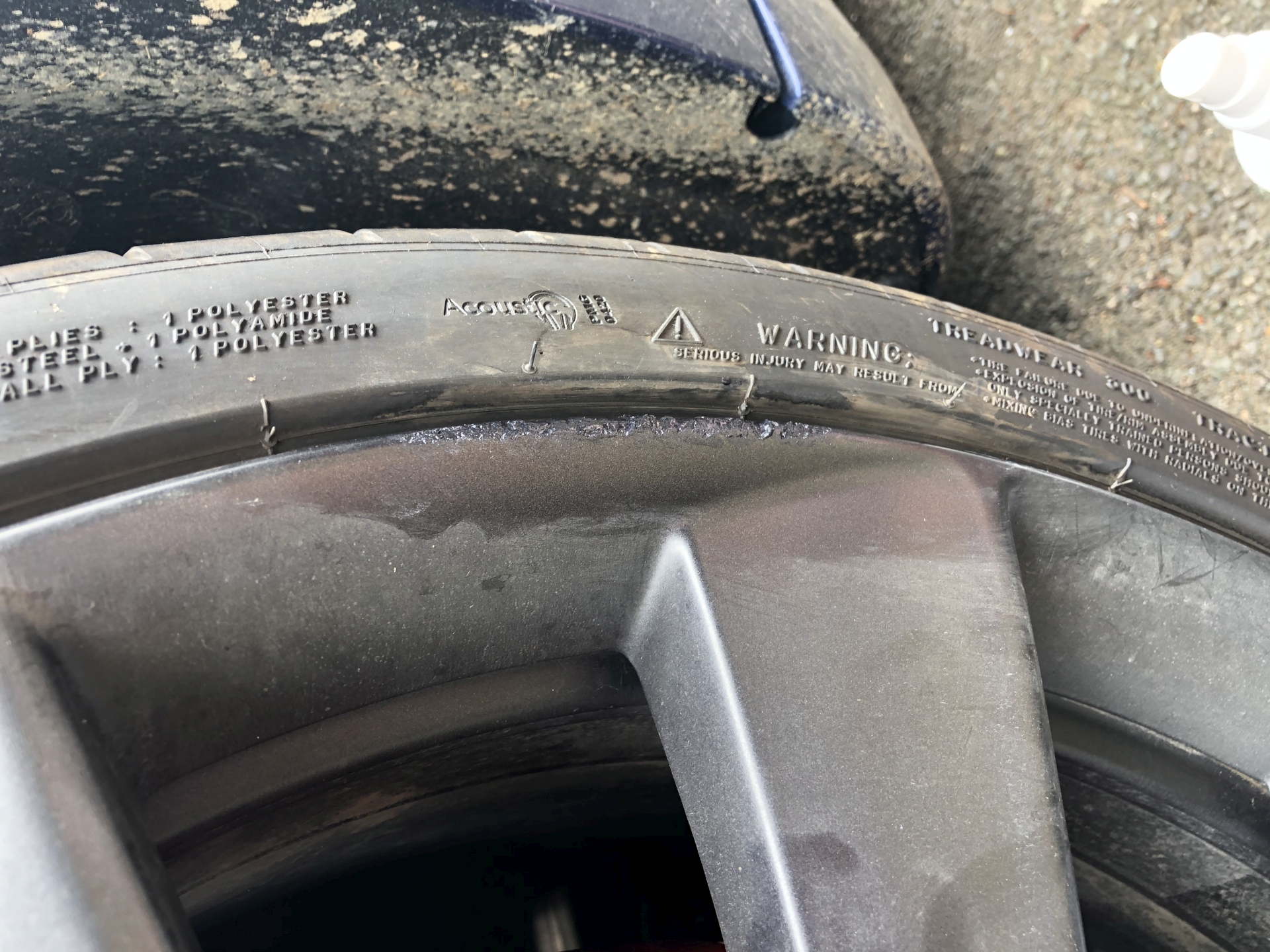 Post whore time. Rim protectors are now fitted! They blend in pretty well, in fact they're more noticeable in these photos than they are IRL and I couldn't even tell that they were on when it was being pulled out of the workshop. That was a side-on view. 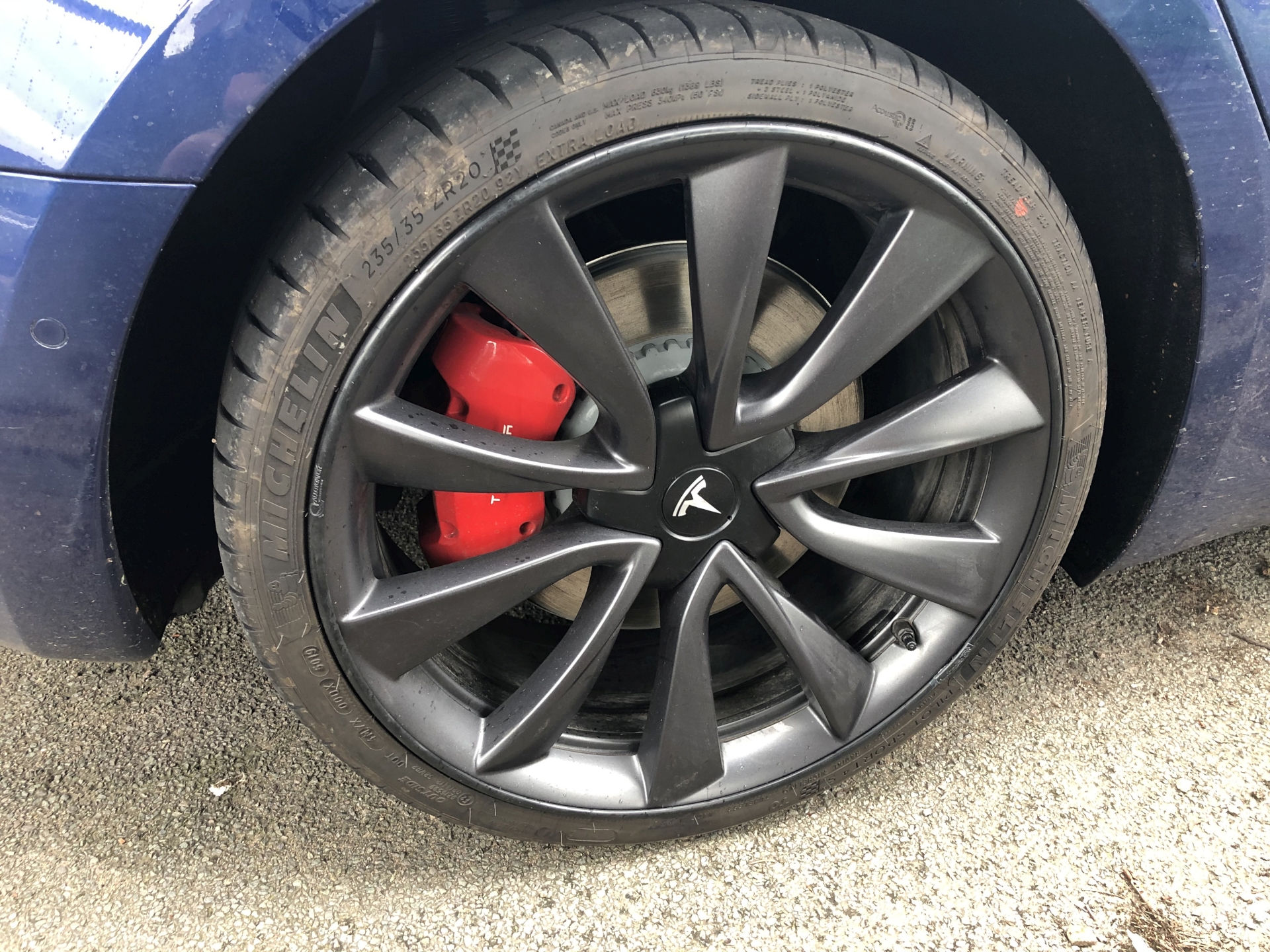 You can barely make out the damage under the protector on the left front. Edit: You would if I uploaded the right photo... 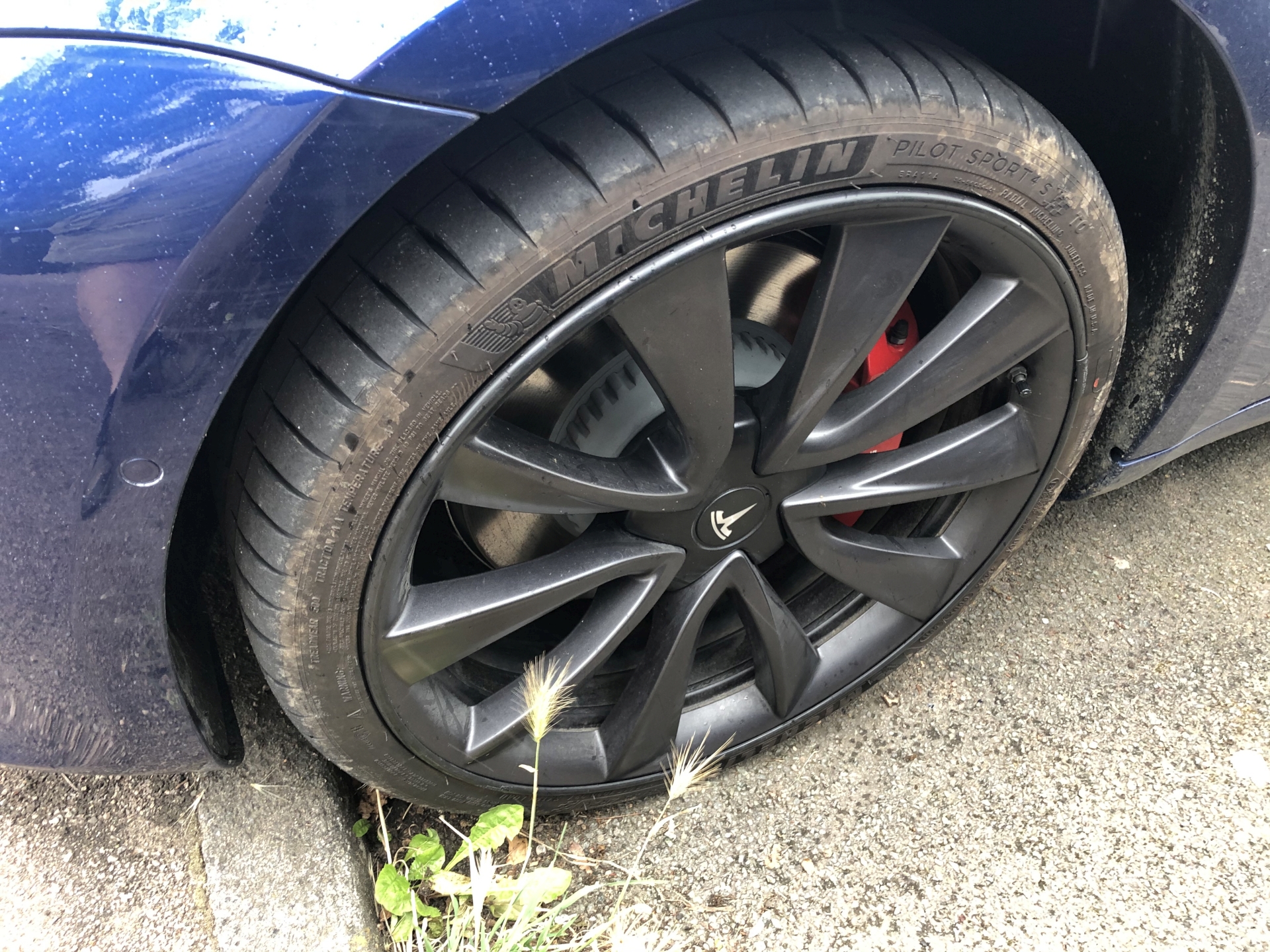 £140 fitted, probably about the price of one repair and I hope to keep these on the car for a long time.

Edit: Insurance got back to me, almost £200 refund for reduced mileage during lockdown. I'm glad they did, I had a Twitter complaint drafted out and everything. I'm still cancelling on Friday though...
Last edited: Jul 7, 2020
You must log in or register to reply here.
Share:
Facebook Twitter Reddit WhatsApp Email Link
Top