Ownership Verified: Polishing a turd. 1973 GMC Sprint, with a side of XJ

I don't know why I've never bothered to make a thread for this car, as long as I've been hanging around here.

It's a 1973 GMC Sprint (badge engineered El Camino if it wasn't obvious) that I've owned since either 2000 or 2001. It has a Buick 455 from an Electra (previous owner did the swap) with a TH400 behind it. Not too many mods but it has a mild Poston cam (good luck finding one of those now) and Kenne Bell long tube headers (yes, Kenne Bell used to be one of the big names in Buick performance parts).

Once upon a time I started doing body work but med school, residency, and life got in the way so that's all gone to hell in the time it's been sitting.

It's been sitting and rotting for about 8 1/2 years now, since my first year of med school, and it's time to get it back on the road. I guess that's the reason for finally posting it up. If I remember to take some pictures I'll try to document the progress here. 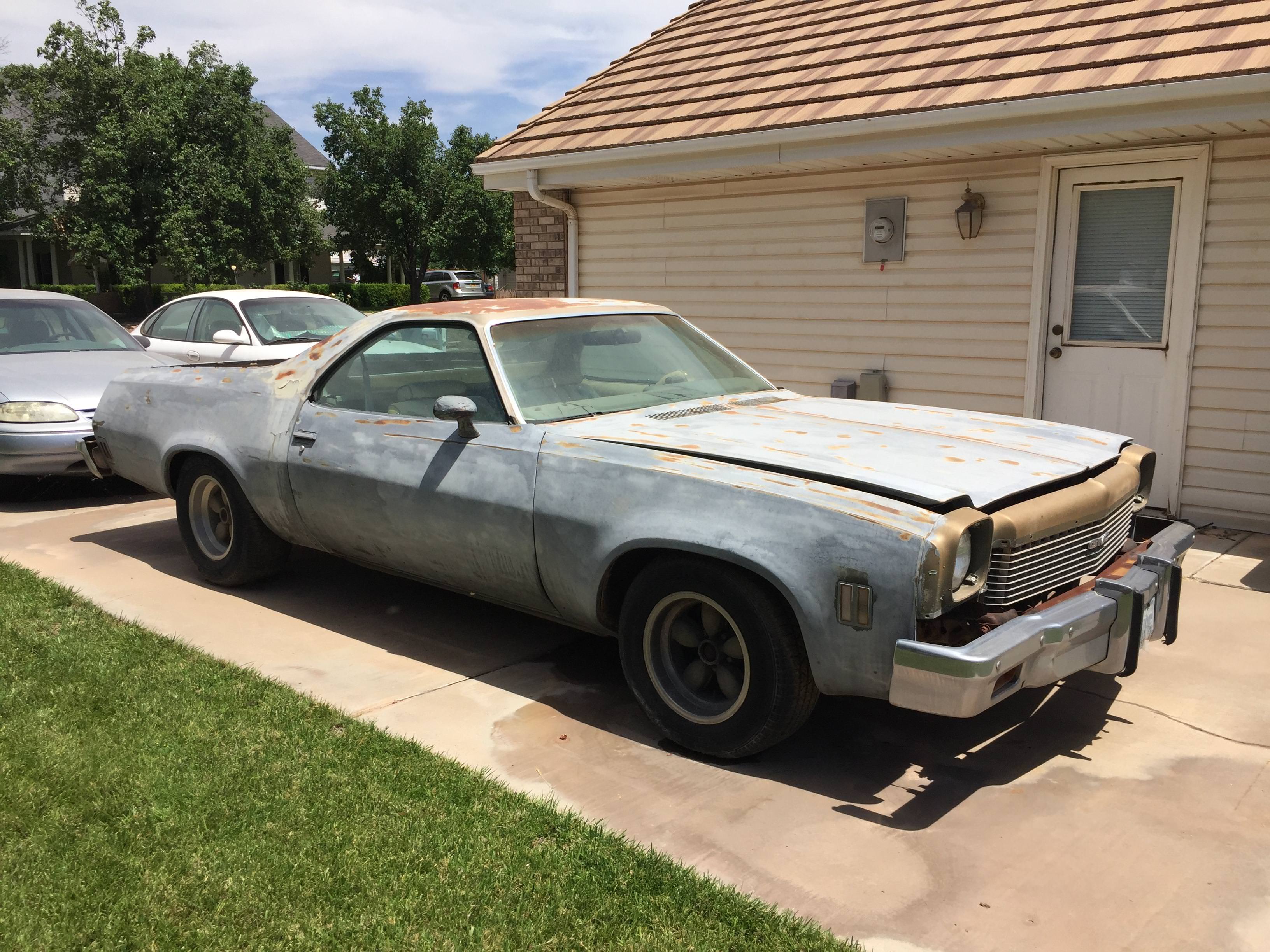 Here it is in all its "beauty." 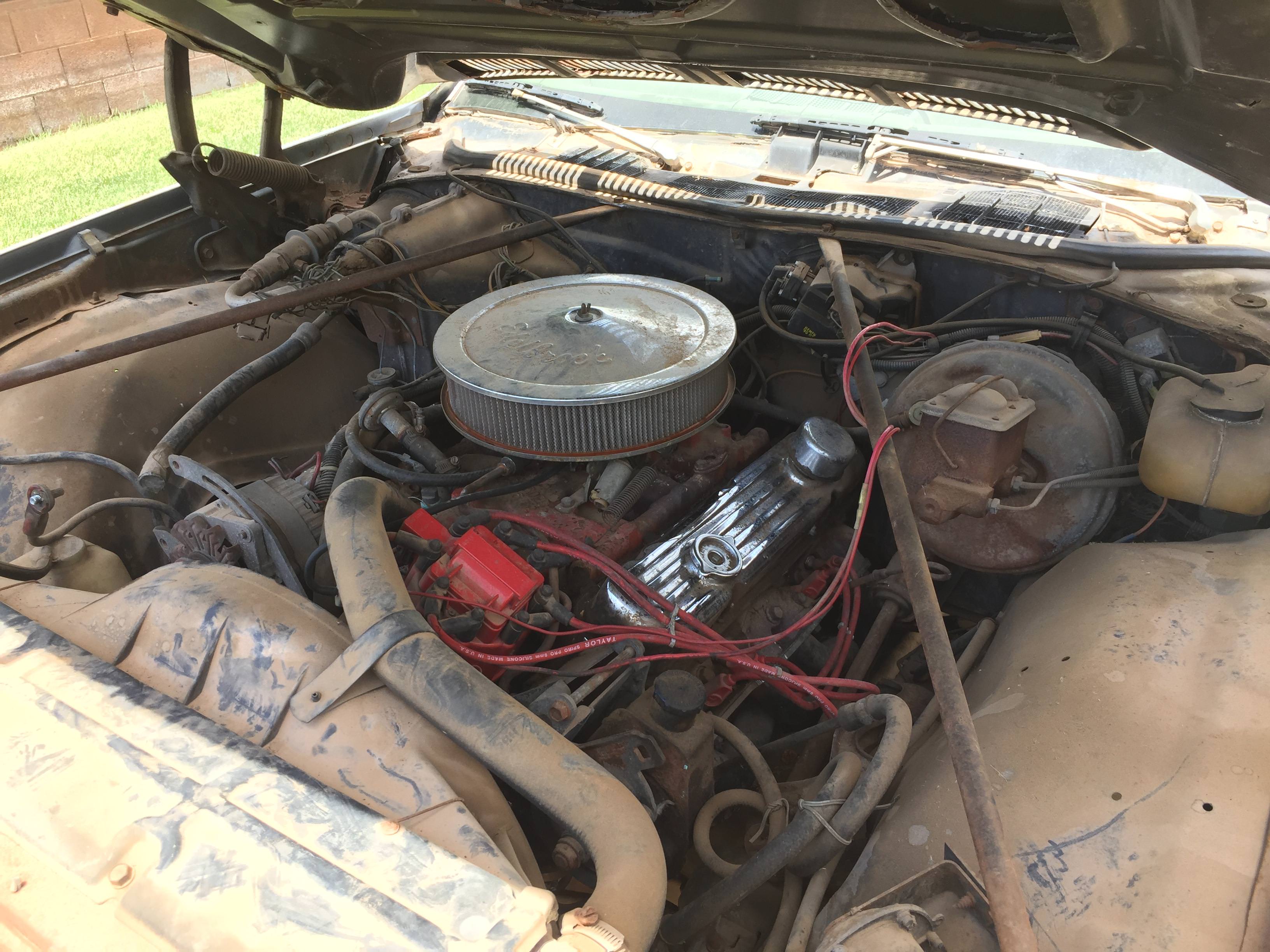 The 455, minus most of the black widow webs, wasp nests, and squirrel leavings. 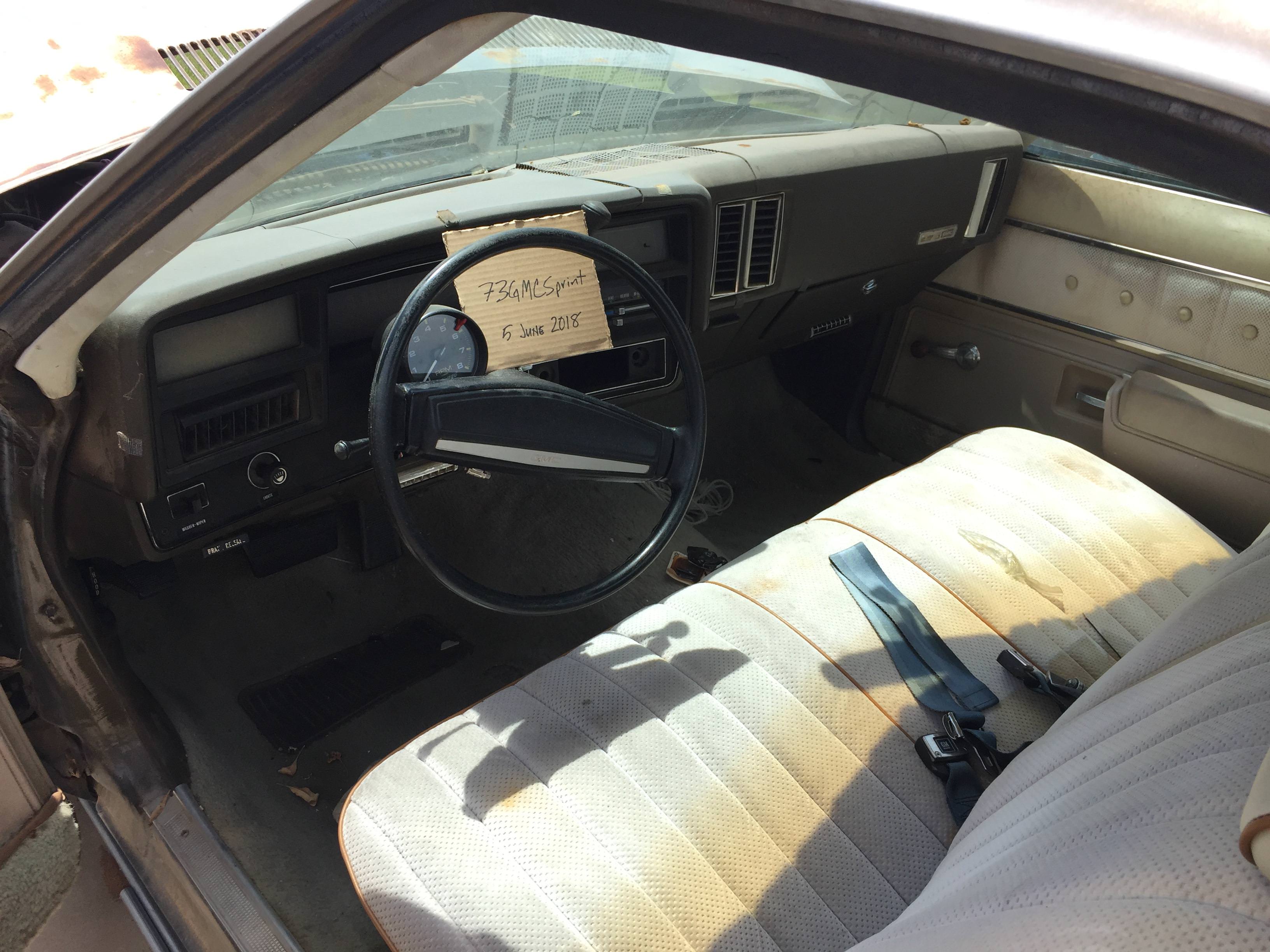 Proof. Other than the cracked dash and a couple of disintegrated trim parts, the interior is in surprisingly good condition. 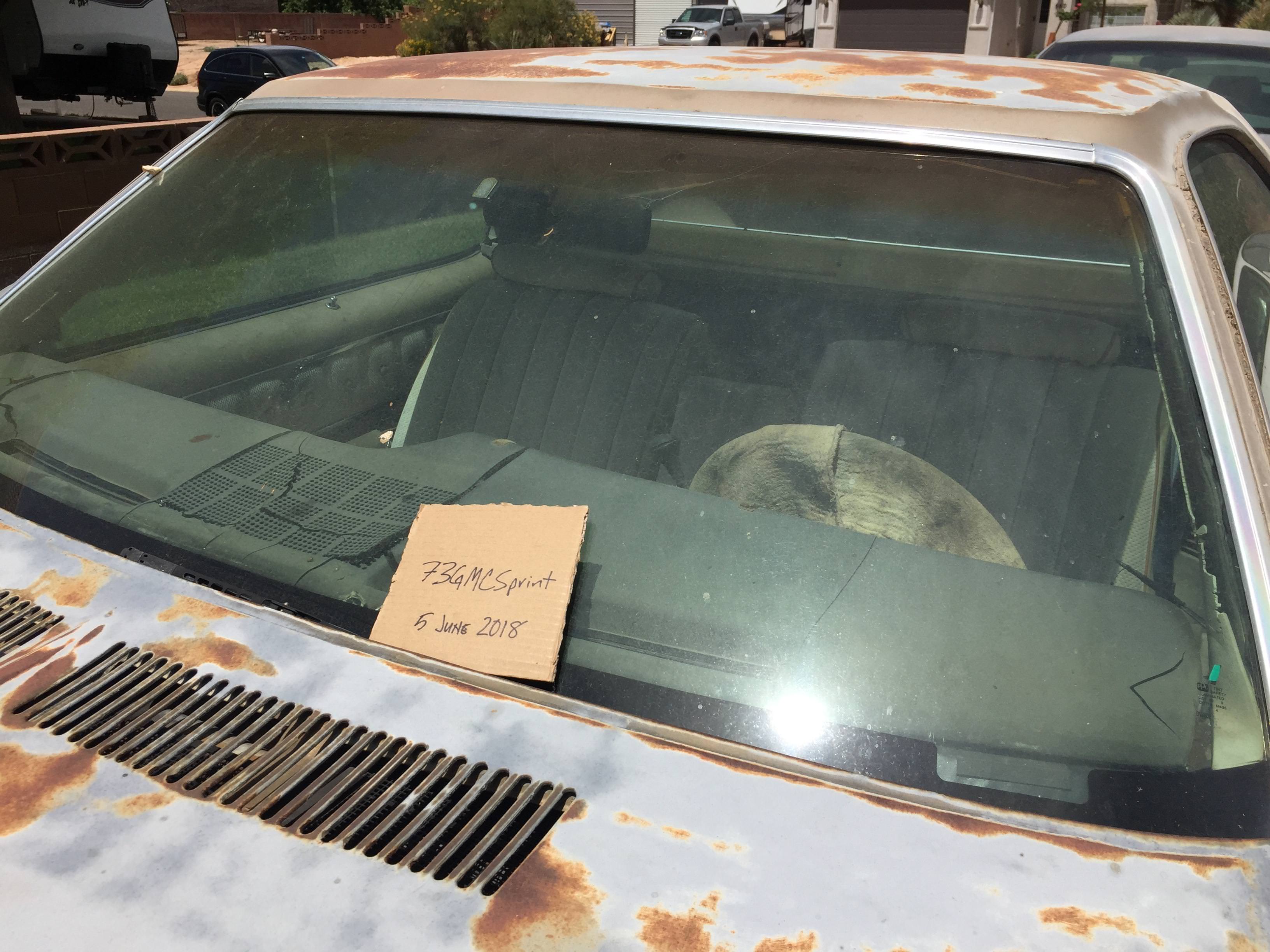 So far I've cleaned the spider webs, wasp nests, piles of pecan shells left by squirrels, etc. out of the engine bay. Shockingly, I haven't found any squirrel-chewed wires. Yesterday I rebuilt the Quadrajet. Today I put it back on and replaced most of the vacuum lines. I've picked up some other replacement lines and a new battery.

Next up is to replace fluids and belts. Then I'll prime the oiling system (Buick engines WILL destroy the front lobes on the cam if you don't prime them when they've been sitting too long), and try to start it. Hopefully that will be this weekend, and hopefully it doesn't just blow up.

The tires hold air but I'm sure they're sun-rotted. I won't bother replacing them until I know it will run.

As you can see, it needs a lot of body work. I'll get it on the road before I do much there. there are a couple of places that need attention to stop progression of existing rust, but I won't be doing much beyond that at least until after summer. Body work in 100-110+ degree heat sucks ass.

There are a lot of things I'd like to do it eventually, but it should be an decent driver until I get around to it.

I'm definitely looking forward to updates on this project.

When I was growing up, my parents drove old Chevelle's. The baby was the 1971 that my dad pretty much inherited, but his daily was a 1973 Malibu. It was no where near as good looking as the 71, so it was never appreciated as much. But after seeing that movie Drive with Ryan Gosling, and his character's 1973 Chevelle, I have to admit that I find myself wanting one.

Good to see it is getting some attention.

When I was growing up, my parents drove old Chevelle's. The baby was the 1971 that my dad pretty much inherited, but his daily was a 1973 Malibu. It was no where near as good looking as the 71, so it was never appreciated as much. But after seeing that movie Drive with Ryan Gosling, and his character's 1973 Chevelle, I have to admit that I find myself wanting one.
Click to expand...

Yeah. The '73-'77 A-bodies are definitely the ugly ducklings, especially '76 on. It's no wonder they died off after that, besides the oil crisis in the '70s. They're starting to pick up in popularity though so there are a couple of places making some reproduction parts now.

There are a couple of appearance mods that help these a lot. Narrowing the bumpers and pulling them in closer to the body does a lot for the overall look.

I wanna know more about the residency and field of specialization!

JimCorrigan;n3549823 said:
I wanna know more about the residency and field of specialization!
Click to expand...

I'm an Internist. I've been practicing for about 2 years now. Med school was in Las Vegas (well, Henderson, but I lived in Vegas), and residency was in a small town in the middle of Arizona. I didn't have any time or space (or money) for the Sprint during that time so it got parked at my parents' house. It was supposed to get driven regularly, but you know how that goes. Now I'm back home in Southern UT. I wouldn't really say I have much more time now but at least I've got my own house and a place to work on the car.

Couldn't have been too many of these produced in the first place, let alone all that many left today. How does the front end differ from the Malibu/Chevelle of the same year?

CraigB;n3549916 said:
Couldn't have been too many of these produced in the first place, let alone all that many left today. How does the front end differ from the Malibu/Chevelle of the same year?
Click to expand...

I'm not sure on production numbers but definitely not as many Sprints as El Caminos. The grill is pretty much the only difference in the front end.

I am not not if I would need to use all my fingers to count how many I have seen in my life. Although, it could be that I just could not tell the difference when I was a kid.

73GMCSprint;n3549997 said:
I'm not sure on production numbers but definitely not as many Sprints as El Caminos. The grill is pretty much the only difference in the front end.
Click to expand...

And I'll bet reproductions are non-existent.

Primed the oiling system (FYI, TA Performance makes a fairly affordable Buick oil pump primer), put in a few gallons of fresh gas, and with a few squirts of starting fluid it fired right up. It ran rough for a few seconds (probably had to pump the lifters back up) and then settled into a nice idle. It actually runs better than it did when it was parked. I'm pretty sure it had a bad vacuum leak that was fixed by replacing all the lines. Rebuilding the carb probably helped too.

Need to figure a few more things out before I drive it too much but I'll probably take it around the block later today.

I have been way too long without a running V8.

Is that a slight exhaust leak I hear?

It could be. It's not as loud as the phone picks it up. It might be the timing being too advanced too. I need to do some tuning.

This thing is great! Nice purchase!!!

I went back and listened to the video. That's just the Quadrajet swallowing mass quantities of air.
Last edited: Jun 16, 2018

I really haven't made any progress on this pile in several months (has it been almost a year?!), mostly because I've been working on a Jeep--it might get it's own thread soon. But that's soon to change.
For most of the past 10 years it's been sitting at my parents' house, but I finally got it moved to my house.

I think it had been parked there so long it didn't want to leave. I went to start it today and the battery was dead (battery is less than a year old, and the car has been started and run regularly and recently). Go figure. Once I jumped it, it promptly sprung a massive fuel leak, which meant a parts run before it could be safely driven.

Despite the resistance, I got it to my house and it's now in MY driveway for the first time: 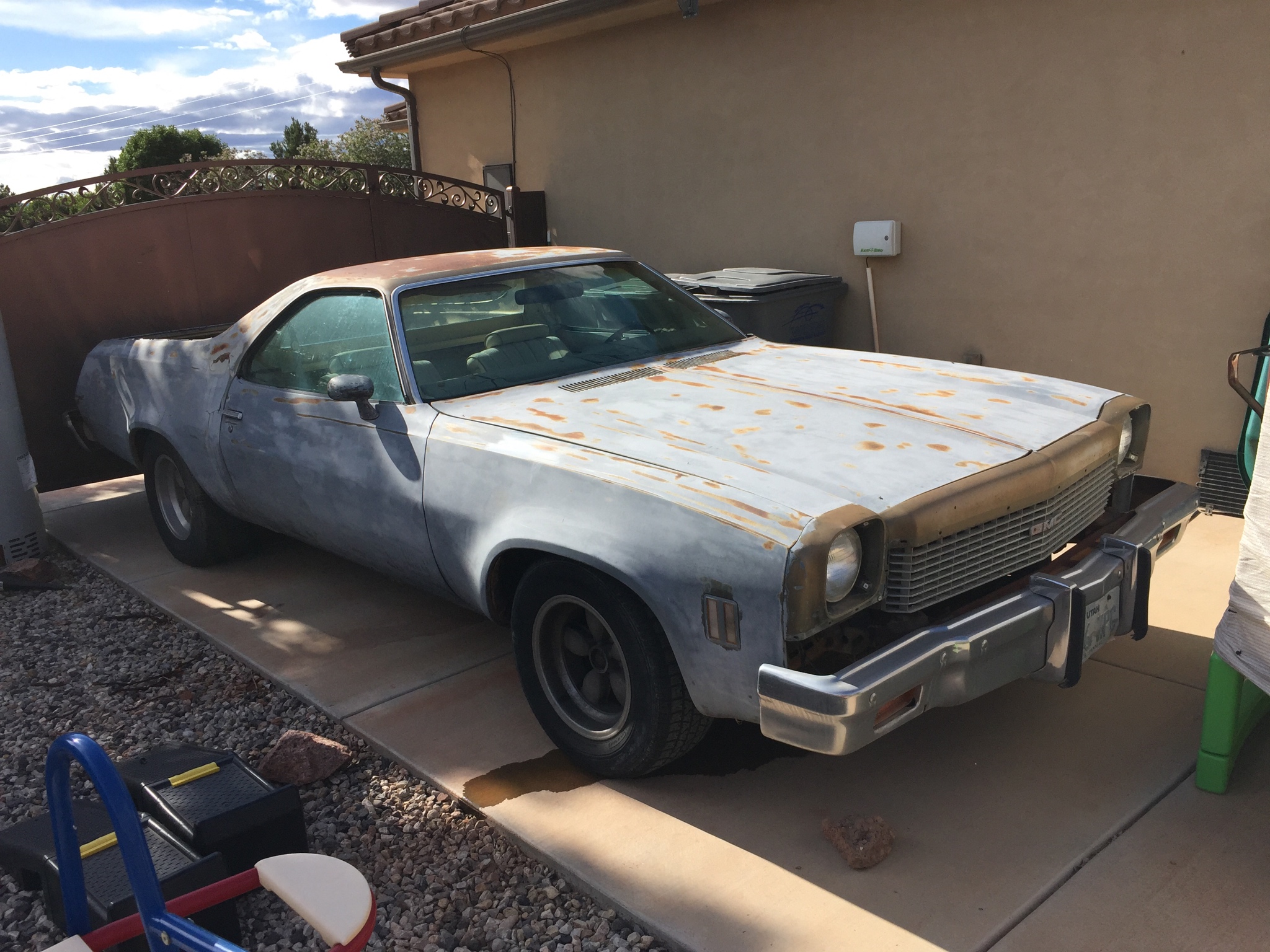 I promptly put it on jackstands so it couldn't run back to its previous home. 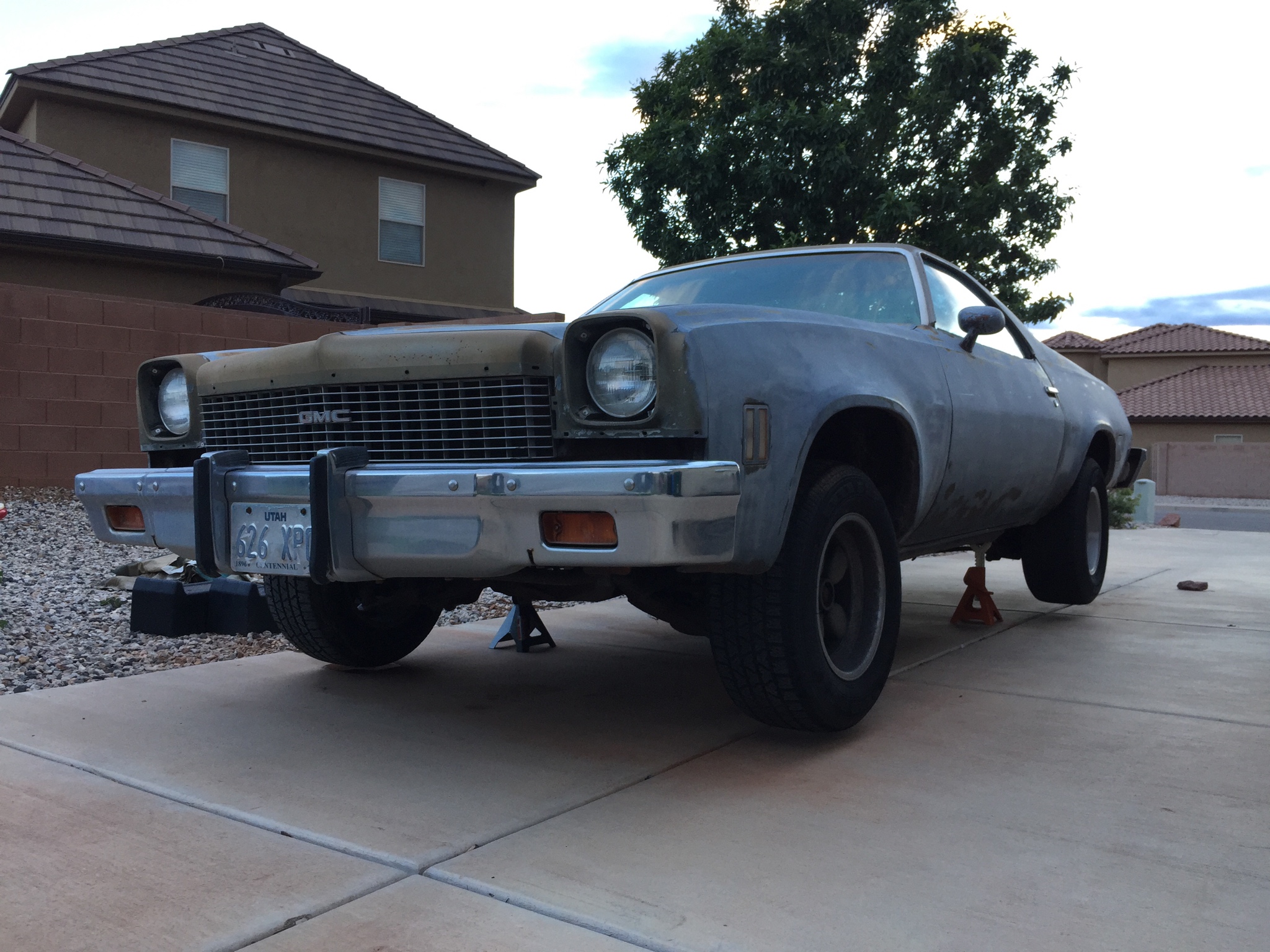 I've already got all the parts to do a complete brake system overhaul. I'm 99% sure at least one rear wheel cylinder is toast, but the entire brake system is over 45 years old, so I don't trust it. You gotta love the fact that millions of GM cars used the same basic brake parts. I got a new master cylinder, calipers, rotors, pads, wheel cylinders, and brake lines for under $250 total. I'll try to document those repairs.

For some reason, today it started blowing white smoke for the first time, so that will need to be diagnosed. I'm hoping it's just the transmission vacuum modulator and it's sucking ATF, but I have to wonder about a head gasket or maybe just an intake gasket. It shouldn't have any reason for a blown head gasket or cracked head or cylinder, but I guess you never know.

Shit.. TIL this thing exists! Looking forward to it's completion in 5-10 years

thomas said:
Shit.. TIL this thing exists! Looking forward to it's completion in 5-10 years
Click to expand...

It's kind of an oddball. I've had parts store guys tell me it didn't exist. I just referred them to "exhibit A" in the parking lot (and for some funny reason it showed up in their computer).
I don't know if it'll ever be "complete." At this point I just want to drive it.
You must log in or register to reply here.
Share:
Facebook Twitter Reddit WhatsApp Email Link
Top