Great! I got a place to crash in Cologne!
Battered and weary after the craziness of the 1960s, the self-righteousness of the 1970s and the greed of the 1980s, I want to go home again, oh, so desperately - home to that land of drive-in restaurants and Chevy Bel-Airs, making out and rock 'n' roll and drag races and Studebakers, Elvis and James Dean and black leather jackets. Not that I ever owned a black leather jacket.
(Roger Ebert)

Dr_Grip said:
Great! I got a place to crash in Cologne!
Click to expand...

:lol: I'll figure out a way to fit an airbed in the place.

Shout if you're ever headed through Kiel Canal

Also, congrats on having one of the most powerful engines on the forum :lol:

I got to do a Guest Blog post for Speedhunters!! Huge thanks to FG's own Paddy for asking me to do it.

I received a conditional job offer, providing I can get a top secret government clearance.

I did a language test on Wednesday, its purpose was to determine which level of language course I should attend at university. I had been hoping for the second highest, but will be in the highest.

Ok, been there 2 Weeks.
"how come you haven't been clocking on?"

"I haven't been told anything, nor do you have my bank details." (despite my bitching last week)

"yeah, you won't get paid this month, it'll be double next"

Also, where the fuck are my work shirts? Everyone else has theirs.
Last edited: Oct 24, 2011

Another whine:
So I got paid today, the fact that they've paid me the 18-20 year old rate is this weeks way of fucking me over.

Hey there, me again. Yes another complaint.
Ok everybody had to go in today at 5pm to 'prepare for the Christmas rush', if you couldn't make it, you had to give a letter to the manager stating why... the fact that she didn't turn up to this, questions the scheme.

So we watched a DVD, apparently it was about customer service, but we all thought he was gonna kill himself, which is mainly true. Then had to write on a post-it note, how we could improve the store? Everybody wrote the same thing and then we went home. I arrived at my mums house for sunday dinner, which at the time I got to hers was nice and cold.

'The management' which is a term I use loosly, said that they'd order pizza after the 'meeting'... or we could leave straight after the BS.

Just got Honorable Mention in an international architecture competition, no big deal.

I got another gig as a techincal application admin. So, managing, implementing and customizing software installs and updates. It's for a shared service center for a couple municipalities in the south-west of the country. Current client was kinda late with renewing the contract (expiration was set on nov 1, and the only renewed on oct 27), so account management went and found me something else. Excited to start, apparently I was the only true technician who applied there.
2018 Renault Clio Tce 90 Intens

Helped deliver a 30 week old baby last night in the ER.
B

Got a job a week after quitting school

BTM5: Meh, I started my current job five days after handing in my thesis... and there were 1.5 bank holidays and a weekend in between :lol:
Also, congrats

BTM5: Meh, I started my current job five days after handing in my thesis... and there were 1.5 bank holidays and a weekend in between :lol:
Also, congrats
Click to expand...

how is the job market in Germany? I really want to live there, that or Sweden/Norway
2003 WJ with no damn heater
2013 Actros 1842 with an awesome heater

BTM5 said:
how is the job market in Germany? I really want to live there, that or Sweden/Norway
Click to expand...

The statistics say our unemployment rate is the lowest in about thirty years, 6.5% in October 2011. This being Germany, we do have detailed analysis on that - how much of it is faked/smudged/beautified is another story.
You can even pick where to live based on said statistics, however that's obviously only one part of the story. 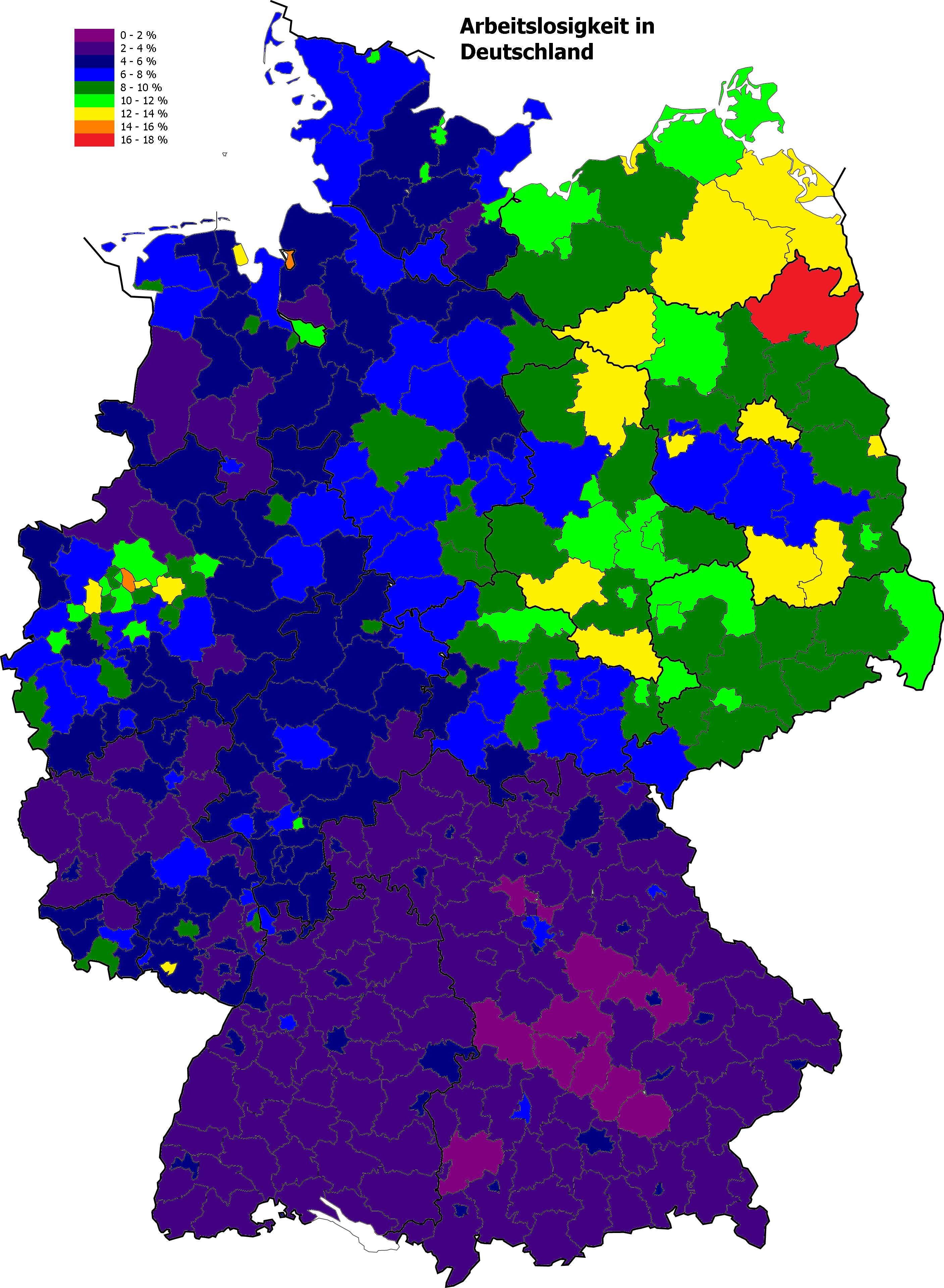 Take my city of Kiel (the second small green blob south of Denmark, surrounded by dark blue). This image suggests we're at 10-12%, while the surrounding areas are at 4-6%. However, most jobs tend to be in the - supposedly unemployed - city, the employed tend to move a bit outside while the unemployed such as newly finished students stay in cheap, small city flats.
You can see a clear difference between the former West Germany and GDR, the west is at 5.6% while the east is at 10.2%. Statistically that would be a bad place to move to when looking for a job, but if you do have an offer there cost of living tends to be cheaper.

Things are apparently very bad if you're a long-term unemployed, ie more than one year without a job. I guess part of that is the stigma of being lazy, not trying hard enough.
If you're a skilled worker, an engineer, a scientist, or similar things are very good from an employee point of view... I'm in that category, didn't have to put any effort in and got more offers than needed.

More importantly than any statistic, in almost every field your German must be adequate. In some sciency and high tech sectors English works well, but in general you will have to be able to speak some, and improve rapidly.

Several bad things were going on when the baby came. Number one being it was 2 1/2 months premature, second it was a breech delivery, and third the mother hadn't been following along with her prenatal care. When it was delivered we had to ventilate for it and do compressions to jump start its heart. The labor and delivery doc's were right behind us and came in an intubated the baby and it was transferred it to the NICU pretty quickly. By the time I left my shift the baby had been extubated and was in stable condition. It was my first delivery and I definitely want more.