LP said:
I saw that one, the RS e-tron GT. I love that vehicle but man that color is fuckin awful. This is much nicer (even without the lady):
Click to expand...

I mean to each their own. I just wanted to keep something entertaining in the bg while I worked on mundane tasks.
BlaRo: i'm a strong independent black woman....WHO DON'T NEED NO MAN

Did some remodelling of my office lately, moved my desk so that it no longer faces the window, some general cable cleanup (at least, on top of the desk, the spaghetti under it needs tidying still), a small audio upgrade (Yamaha RX-V667, two Jamo A235, and three Sony SS-TS503S speakers I scavenged from the Sony hometheater-in-a-box hat was my previous desk audio), and more LEGO, of course.
(Yes, the MBP is also hooked up to the screens, and the keyboard has a bluetooth profile for it) 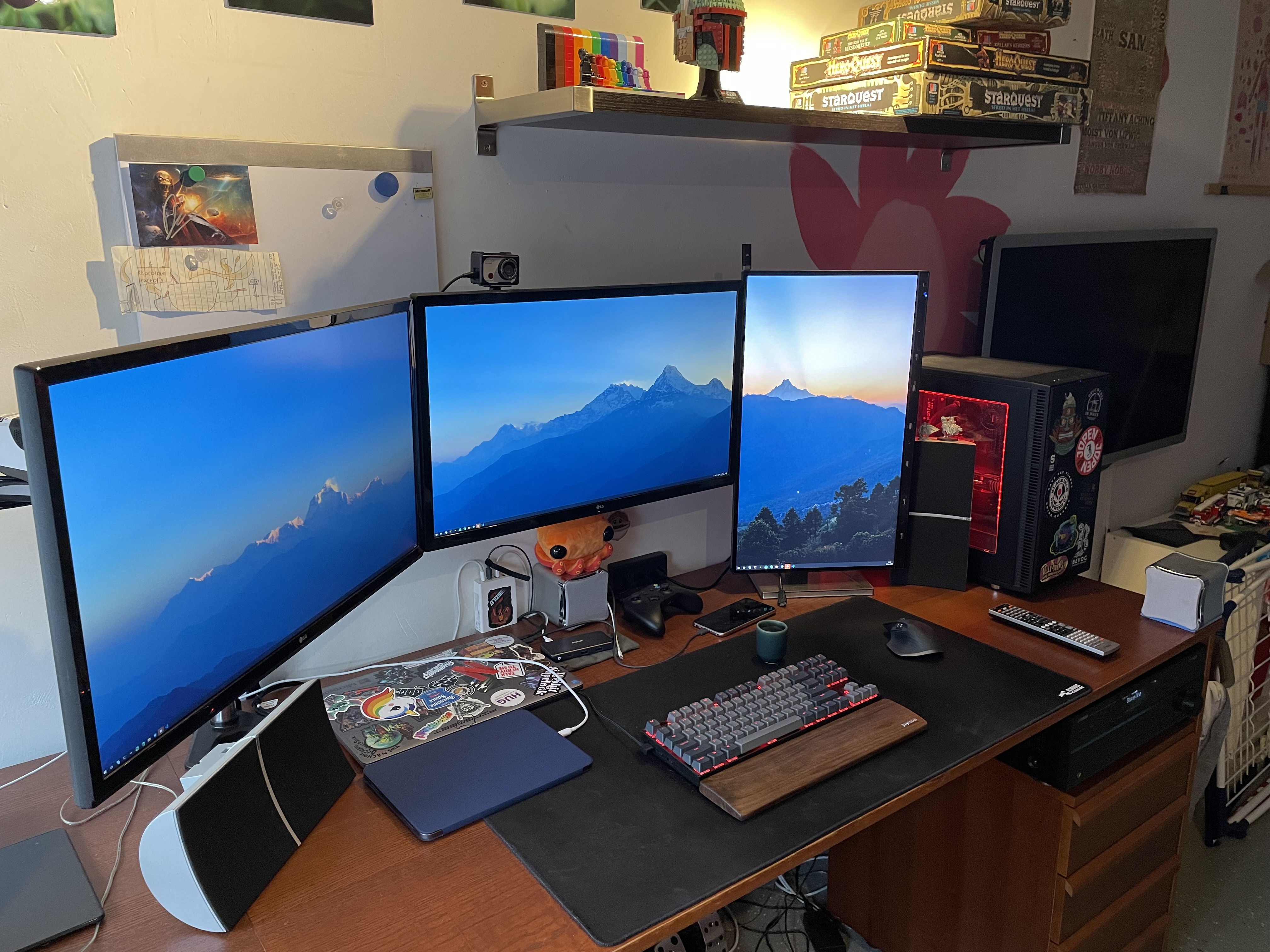 And as a WFH-hipster (I was doing this shit waaaay before our governments forced us to make it cool), I also needed a cool backdrop for my webcam shots, so IKEA KALLAX, LEGO and other stuff totherescue:

Out of everything, the stand out item to me is the Holy Grail trojan rabbit. Nice setup overall, how well do the surround speakers work placed like that?

They do add some surround to the whole sound experience, so they kinda work, not as well as when placed properly, of course. But I don't have the space for that (there's a spare bed right behind me, below the KALLAX). I did of course do the whole YPAO setup for the best sound where my head is.
2018 Renault Clio Tce 90 Intens

Matt2000 said:
Out of everything, the stand out item to me is the Holy Grail trojan rabbit.
Click to expand...

It’s no secret that I love Monty Python, so it’s really no surprise that someone like Rifiröfi would be able to successfully appeal to my vanity in order to share his own LEGO Monty Python creations. The thing is, Rifiröfi LEGO recreations of key scenes from Monty Python and the Holy Grail are...
www.brothers-brick.com

I finally have a somewhat clean-looking desk setup! Managed to did some only-semi-lousy cable management, and removed everything that isn't in use.

The monitor remains the same Dell U2717D as it has been before, the PC is the same Dell Precision T3610 as before, apart from the fact you can see it now (and a HDD upgrade which you can't see anyway), but the rest of the peripherals are new, and frankly, they're all more-or-less trash.

Okay, the mouse is decent (Logitech G302 Daedalus Prime), but it's a gaming mouse and it shines blue light. I actually don't mind the light as much as I thought I would, but I still can't really make out the difference between this one and my old one, which was some cheap generic crap. Therefore I listed it in the classifieds, along with the keyboard.

Which brings me over to the keyboard. It's small, it's compact, it's light, and that's where the good things about it end. I've never tried Cherry MX Blues, but this has a clone of them (Outemu Blues), and they feel like they're way too easy to press. I might've just got used to the IBM Model M, but these switches just feel cheap. And so do the keycaps, which are really ugly, and so does the build quality of the board itself, and so does the overall experience. Luckily, both this and the mouse were dirt-cheap flea market finds, so I can only gain money by selling them.

And the speakers are probably the worst, but I can't and won't sell those. They're some cheap, generic, 5W (IIRC) crap that doesn't sound good. The only good thing about them is that they're USB-powered, so I don't need a bigger power strip just yet. Also, a good thing is that I can always use my Koss headphones for whenever I want better sound quality or for when I need more privacy. These speakers are basically here just for when I don't feel like having headphones on.

I will be going back to the IBM Model M or a newer, rubber-dome IBM keyboard I have lying around as soon as I sell this keyboard, and I will go back to an inferior, generic mouse just because I don't need better, and because I could have a little bit of profit by selling this one.

Oh, and if I want to use my laptop I can put it where the keyboard is, and use the monitor as a secondary, upper screen (a bit of an odd setup, but I kinda got used to such a setup last semester). Also, shall I need, I can move the PC a bit further to the left, put the laptop there, and use them both at the same time, but I don't see a need for that.

TL;DR: I did an attempt at cable management. Doesn't look spectacular by any means, but it's much nicer than any setup I had before.

Does your dell monitor support Dell's AX510 speaker or another soundbar? The 10w AX510 is powered by a power pass-through from the monitor, and attaches (toollessly) to the bottom of the monitor. I had one for my U2412M.
There is no such thing as a stupid question.* *but there are a lot of inquisitive idiots.

From a quick Google search, I'd say the answer is no. There are no mounts for it underneath my Dell monitor, either. I'd get some better speakers, but they aren't on my priority list for now, as I have a decent set of headphones (Koss KSC75).

Tram said:
From a quick Google search, I'd say the answer is no. There are no mounts for it underneath my Dell monitor, either. I'd get some better speakers, but they aren't on my priority list for now, as I have a decent set of headphones (Koss KSC75).
Click to expand...

Ohh, OK. Looking at it again (for no real reason), it looks like Dell's solution for your monitor model is a bar that attaches to the stand:

FWIW, when I didn't care much about speakers and didn't want to deal with cables and desk space, mine served me really well, and since the version I had attached to the monitor, I could even use it when my monitor was mounted to an articulating arm.
There is no such thing as a stupid question.* *but there are a lot of inquisitive idiots.

NecroJoe said:
Since this photo, while I had cleaned up the cable management sufficiently, we decided that this orientation just isn't working out. It makes the kitchen feel way too small. The setting sun in the window behind me also made terrible glare over the summer. I hate not having any privacy, though, so I kept it as long as I could stand it.

I've since turned it against the wall on the left.

I also decided to jettison the 5.1 surround speakers. About 3 years I bought some stereo speakers instead for a smaller footprint. I plugged them in for the first time today. They suck serious ass compared to the others. *sigh*

Yes, I know the desk is beat to hell. It was $129 from Target, like, 15 years ago. The keyboard tray glides are janky too, but otherwise it's good enough to keep everything off the floor and isn't particularly wobbly.

I need new speakers, though....

Ideally, I'd also have an under-desk computer holder. I actually have two. One of them can't support the weight of the computer, and the other would squeeze the glass in a way that I would worry about it breaking.
Click to expand...

Since this setup, I realized that if I was going to have any success with school, I was going to need more privacy than this kitchen setup would provide.

So, we made the decision to move the cat litter boxes into the dining area of the kitchen (we never use it anyway), and the small bedroom that was "the cat room" would now be my office.

Another part of the impetus was that my girlfriend won a sit-to-stand desk through work, and she already had one in her office, so I got this one and it wouldn't fit in the kitchen.

However, she wouldn't let me drill a hole in it, so I couldn't use my bolt-through monitor arm. I found someone on Craigslist selling the OEM Dell stand for my exact monitor, so biggie. When I got there, we were talking about Craigslist flakes. He said the only reason he had the stand availble was because someone else was supposed to buy the monitor the previous evening, and ghosted him. I offered a stupid low ball price, and he accepted.

So I had two monitors now (yay!) but only one stand.

Then I found someone else on Craigslist giving away a few parts of a dual monitor arm...my favorite type (one arm, with a cross bar that holds 2 monitors). Over the next 6 months or so, I was able to piece together almost the entire rest of the arm, except for one $15 piece I had to buy. This monitor arm, new through the manufacturer, would be $600.

And clamped to it, is a $5 shop light to use as a bias light/wall washer/video call fill/key light. Ha!

This 12 year old task chair is in dire need of replacement (it's discontinued so I can't get a replacement seat). The shelving on my left size was an Ikea piece I found on CL for $5. The rug was on clearance from...I think Living Spaces or Ikea.

I wanted to hang my PC under my desk, but the case is a little too tall, with all of the structural cross bars under the desk, so I guess it needs to stay on top. I *knew* I should have gone mATX when I built that thing...

Last edited: Jan 28, 2022
There is no such thing as a stupid question.* *but there are a lot of inquisitive idiots.

They multiply so quickly :3