I've searched teh forumz to find another thread of this, but couldn't find anything (Sorry if it is a repost), so here it is! Post cool pictures of your PC to show us what mean machine you have (and of course what's in it). I guess there's loads of PC enthusiasts here, so i guess there'll be tons of cool (or deliberately uncool) machines

Here's my little beastie to start off with:

As you can see the cooler is still stock, this is because i haven't overclocked it yet, and it's taking me very long to decide on which cooler i will use eventually. The PSU will be upgraded somewhere this month to a heavier iGreen one (550W)
Last edited: Jan 4, 2007
Goodbye...
R.I.P.
...Aaaand it's gone

I have the same case man! I hate it for lan parties.....soo damn heavy. So my next computer is a smaller HP with dual core and stuff from my old computer.

Nothing much on the outside has changed since I put this together almost three years ago, except the monitor (got that about two years ago). My specs are as follows:

When I planned my latest pc the top priority was to make it quiet, I did this by using two computers.
Computer #1 is watercooled and it's the one I use for everyday stuff like surfing, gaming and so on.


Sorry for the poor picture quality, I used my cellphone.

Computer #2 is used for netdrives and filesharing. It is located in another room to keep the noise away and I connect the two computers through a gbit-net so I can use the netdisks as if they we're inside my main computer. Since most of the disk are located in this computer I decided to run all filesharing programs on it so they won't cause slowdowns on the other computer.

Really pleased with how it all turned out eventually, had one major leak once after which I decided not to cool my harddrives with water but it's been smooth computing for some 6 months now.

OMG I have that exact Shelby and Viper!!!:O:

Wow you guys have pretty neat computer areas...mine is just a black case and I do not know whats in it so I wont bother.

Padrino said:
When I planned my latest pc the top priority was to make it quiet, I did this by using two computers.
Computer #1 is watercooled and it's the one I use for everyday stuff like surfing, gaming and so on.

You should find a large case to put it in all neat-like. Someone I knew once had a watercooled system and one of those huge Lian-Li towers, and put nearly everything inside of it. Maybe one of the watercooling bits was left out, I don't remember.
woohoo someone changed my sig

Lian Li cases are sick!
I want one for my next build.

i'll post a pic of mine tonight, well at least the parts...

Peter, that TV looks a bit dangerous up there

Peter, that TV looks a bit dangerous up there
Click to expand...

The desk is bowing slightly with it's weight and I nearly did my back in putting it up there. I can tell you that old 25" CRTs weigh a ton.

i have an old Goodmans 20" in my room on a turntable, so i can spin it round to play GT4 in my racing chair (from an Escort) that weighs a ton too. has two shitty grab hadles for carrying it, but they don't work too well

only photo I have online right now... 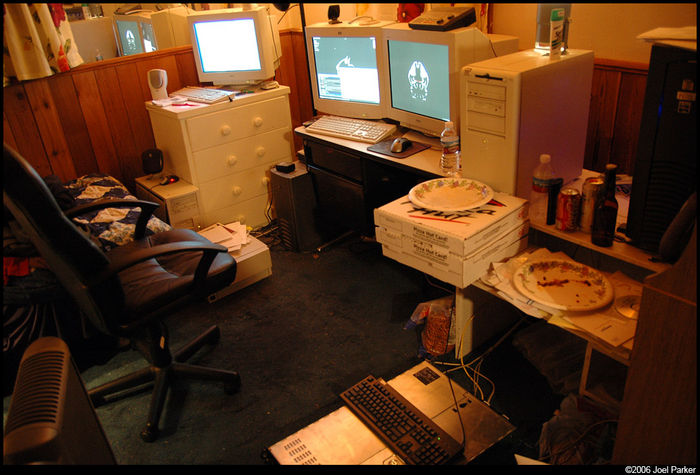 there are 5 computers in that shot... the only windows machine is my main desktop which is the Antec SLK-3700AMB sitting in between the 19" and 21" Trinitrons.

I posted the same pic in the new toys thread. Pc is the black thingy on the bottom left.

Case: Silverstone LaScala LC03
MoBo: Asus P5B (non deluxe, was a bit cheap here, but shouldn't have been, I know)
CPU: C2D6300 (unoced, because its hard to find a quite fan that fits in the case)
Mem: 1GB Corsair XMS2 DDR2-800 (single, wanna buy another one in the future)
GPU: MSI 7900GTO (same card as a GTX, but mem runs a bit slower, easyly uc-able to the GTX specs, but I don't really need it

All powered by the mighty and excellent Enermax Liberty 400W, so props to Vette Boss for buying it. The smaller model is enough for my PC. Its rather silent during normal use, which is DVB-S TV and Xvids. From 30% CPU usage up it gets a bit louder, speedfan is working its magic with the fans.

I hope to improve that even a bit more in the future with a better CPU fan, I'm thinking about a Scythe Katana 775, as it would fit, and is very adustable via Speedfan.
Last edited: Jan 4, 2007

nice touch there with PGR and TDU scattered around. very neat setup you have there, wouldn't stay that way for long if i had it. and PGR probably wouldn't be in the case.

If you would live with your Girlfriend, I'd say chances are good, it'll stay that way.
And TDU is way better than PGR3 anyway