I've been on a bit of an older Top Gear kick lately. I've been watching the often poor quality episodes I've found online, recorded from VHS and the like. My collection is far from complete.

My question is, does anyone know if there are plans for BBC to release the older episodes (prior to the 2002 refresh) on DVD or even online? I think there would be quite the audience for it. If not, I wonder why they wouldn't.

I extremely doubt there will ever be an official release of pre-reboot Top Gear episodes. There's just not enough demand to justify the costs.


The Pirate Bay - The galaxy's most resilient bittorrent site
My Cars: 2008 Dodge Viper SRT-10 convertible (summer weekend car), 2001 Ford Mustang GT coupe (winter car & grocery getter)
There is no replacement for displacement.
- Wolfgang Bernhard, then Chief Operating Officer, Chrysler Group talking about the Dodge Viper SRT-10
... I ask Herb Helbig, vehicle synthesis manager for SRT and a member of the original Team Viper development group since day one, if they'd ever thought of adding traction control. "It comes with two," he says, pointing at my feet. "Learn to use them." Got it.
- Motor Trend on the 2006 Dodge Viper Coupe, November 2005
P

Thanks for the reply and the link. I can only hope someone living in the UK may have all these episodes recorded on old tapes, and one day could upload and share them, so they aren't lost in time forever!

Phat_J said:
Thanks for the reply and the link. I can only hope someone living in the UK may have all these episodes recorded on old tapes, and one day could upload and share them, so they aren't lost in time forever!
Click to expand...

Same. BBC's pathetic attempt at preserving one of its flagship series, especially when you compare what they've done for Doctor Who, is quite frankly staggering to think about. I was only recently made aware of how you can't obtain anything pre-S10 of the reboot on DVD in the UK (a couple seasons after that you can only get in the US too), with a butchered overdubbed version of S9 sold in Germany and then a handful of compilations of the first 8 series. Men & Motors recently finished uploading the last of their Motorweek episodes (best known for being Richard Hammond's first car show) to their official Youtube channel.

The best thing you can do at the moment is request a private viewing with the BBC, though I sincerely doubt they'd allow you to record it, and even less likely to sell the rights. The most annoying part is that BBC aren't the only people licensed to air Original Top Gear; UKTV could in theory too, on Dave, as they produced Top Gear GTI for UK Horizons around the turn of the millennium. But they've never taken the opportunity to do so.

Past year or so I've been building an extensive archive of Old Top Gear episodes, correctly linking segments to the right series/episode number (information obtained via BBC's Genome project), and I'm due to release it as a torrent sometime later this year, but when that time does come around that is the best you'll ever get, unless BBC do something. Below is a screencap of my main "sorted" segment folder: 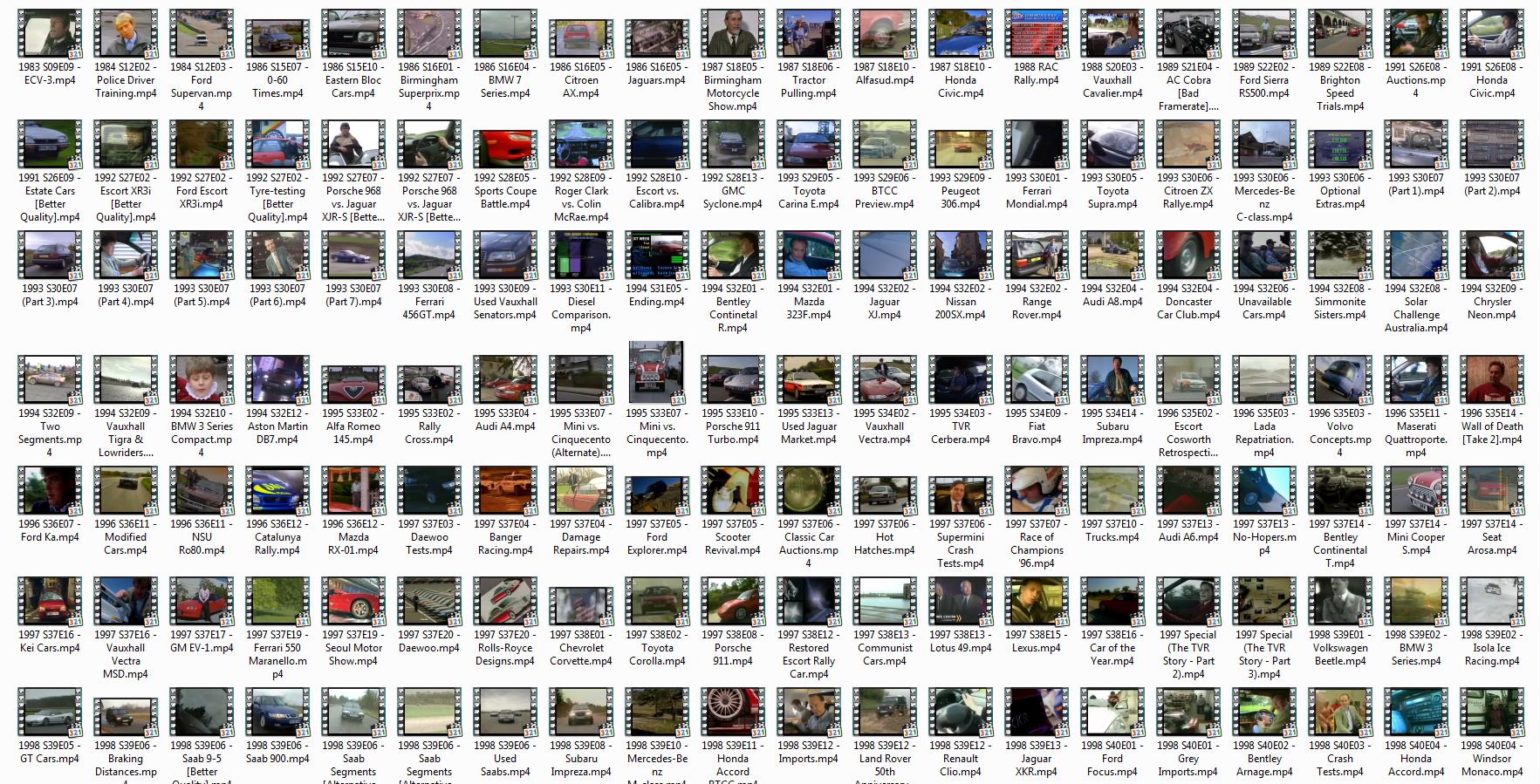 Some will be reassembled into episodes, some already have. Just have to be optimistic that one day BBC will do the right thing.

Though OP's been inactive since the thread creation 3 months ago, I felt it important enough to share. Last night, by pure chance I might add, I bumped into a classic Top Gear torrent full of segments and many entire episodes which have long since been wiped from the internet or butchered in some other way (i.e. copyright claim for the now-deleted audio tracks). It will help my original format TG research immensely.

Since I don't know the rules with regards to posting links and whatnot, I'll just reveal the torrent's identity and trust any interested parties to find it on their own accord. Its name is "Motorsports Classic Top Gear" and was uploaded to That Pesky Boat by a user known as "motorauthority". It's over 52GB but well worth it; I'm currently up to one-tenth of that amount and am thoroughly impressed by what I've seen so far.

Motorauthority also posted the only original quality SBS rips that are left, the others are compressed to all hell. Unfortunately it seems everyone seeding it is stuck at 79%, with none of the S1 eps completed. If anyone has those files please PM me whenever possible.
P

Hey everyone, thanks for the replies. I totally forgot I made this post. I'm in the process of sorting the old Top Gear that I have. A lot of it is badly cropped, has sync issues, has noise on the track, or the color is really off. It's a big project to edit it all, but I'll likely upload it to a torrent site when I'm done. Here's a screenshot of the files I have:

Thanks AlexGRFan97 I will check that out. It might have been the torrent I got my content from a long time ago.

If anyone has old recordings of pre-2002 material on VHS, I'd be more than willing to capture and convert them to a digital format. Logistics of getting the tapes to me may be a challenge, but I think it would be worth it.

Hey there!
Nice to see you didn't abandon your project, just to let you know I am no more than a month away from releasing something of my own featuring the entire Top Gear chronology prior to 2015, including home videos, so don't put yourself through unnecessary amounts of work just yet. Here's everything I now have of the pre-2002 series:

Many episodes have been stitched together in Vegas, edited, color-corrected and volume balanced, among other tweaks. If there's anything in here you don't have or anything that I don't have, feel free to communicate and perhaps we can share what we have between ourselves.

Before I release said content (on another site as I know FG is now verboten), I have written a Lost Media article concerning pre-2002 Top Gear, in an effort to see if anyone has something which I do not yet have: https://lostmediawiki.com/Top_Gear_...es_of_BBC_Two_television_series;_1977_-_2002)

If you were interested, introduce yourself to the LMW community and maybe some people from the UK would be able to help out. I myself do have VHS facilities too, but lack the money and storage to do what you intend to do.
Last edited: Feb 19, 2020

Just to update, approximately 2 weeks ago I released my collection on Reddit. PM me for the URL, since this interface automatically inserts the whole post when you paste in a link.