I'm gonna see what it's like in the summer with the giant greenhouse of a rear window, I might want to get that tinted just for heat reasons. And then I might as well do the rear side windows too at that point.

Congrats on getting it! The colour looks awesome!

Once again, congrats on getting the Mustang. Love the colour and the blue stitching.

First noteworthy update, I just had the rear windows tinted. Mostly because the rear window is a giant greenhouse, but it doesn't hurt the look either. Especially with the black rims. 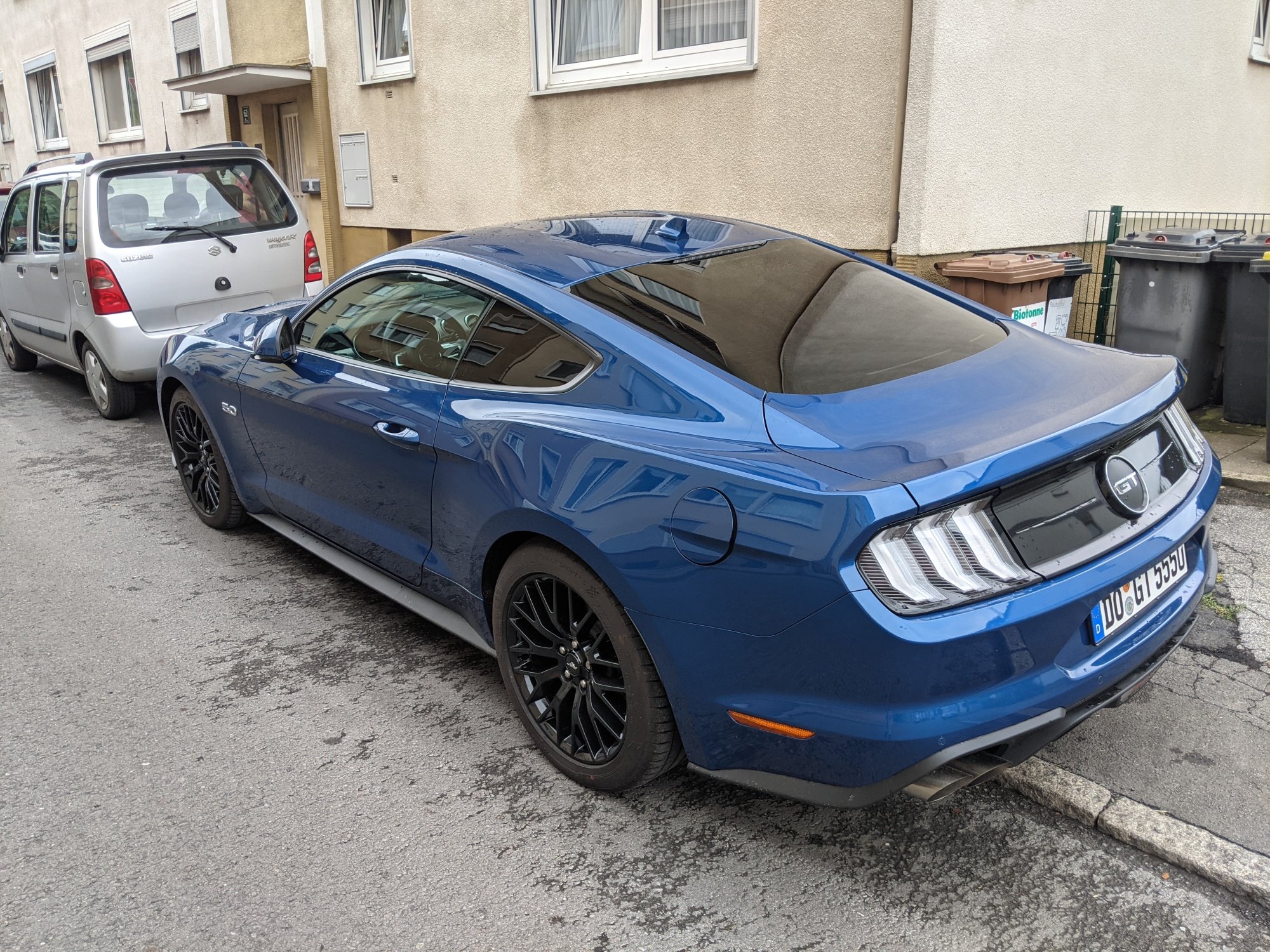 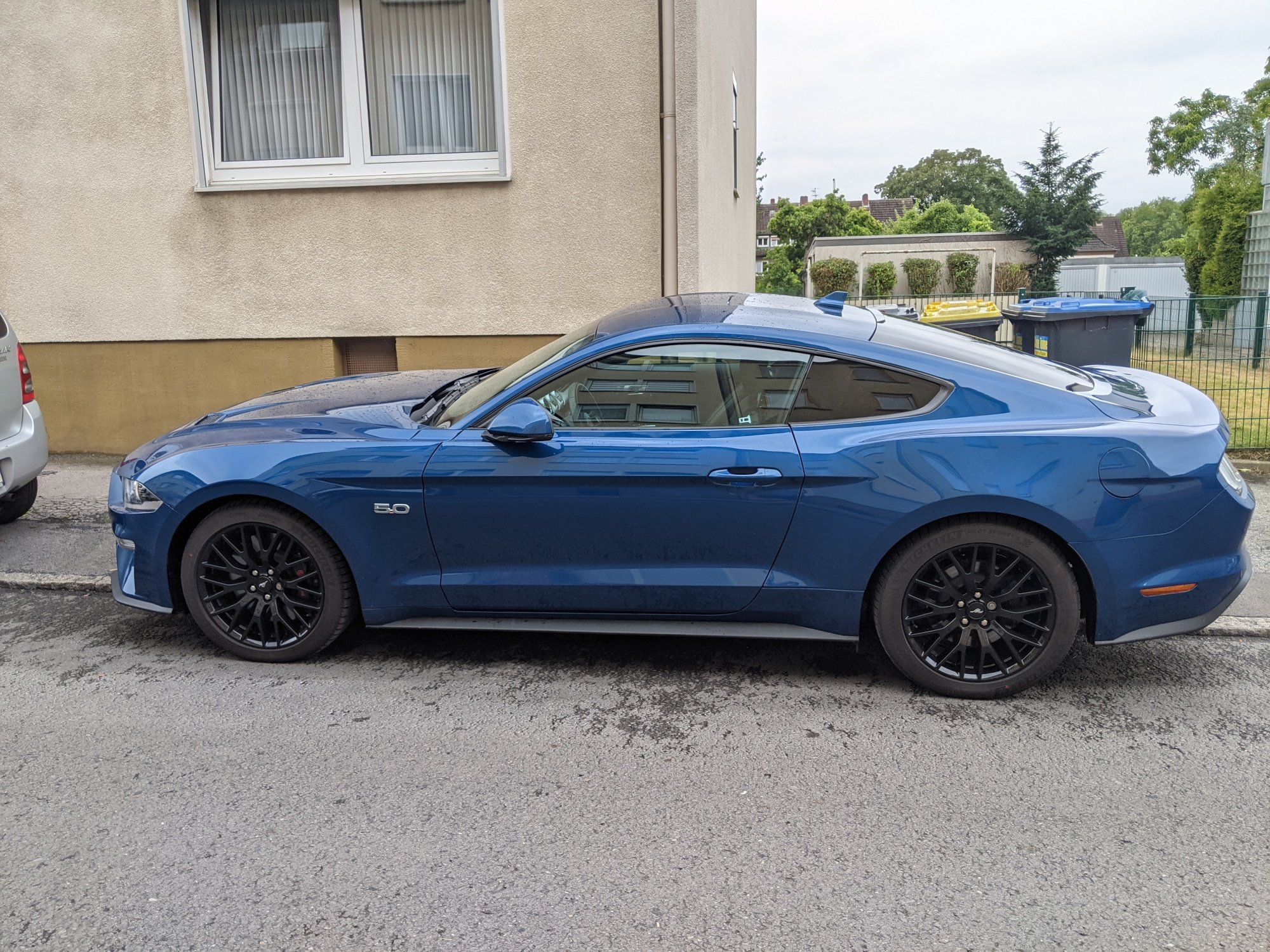 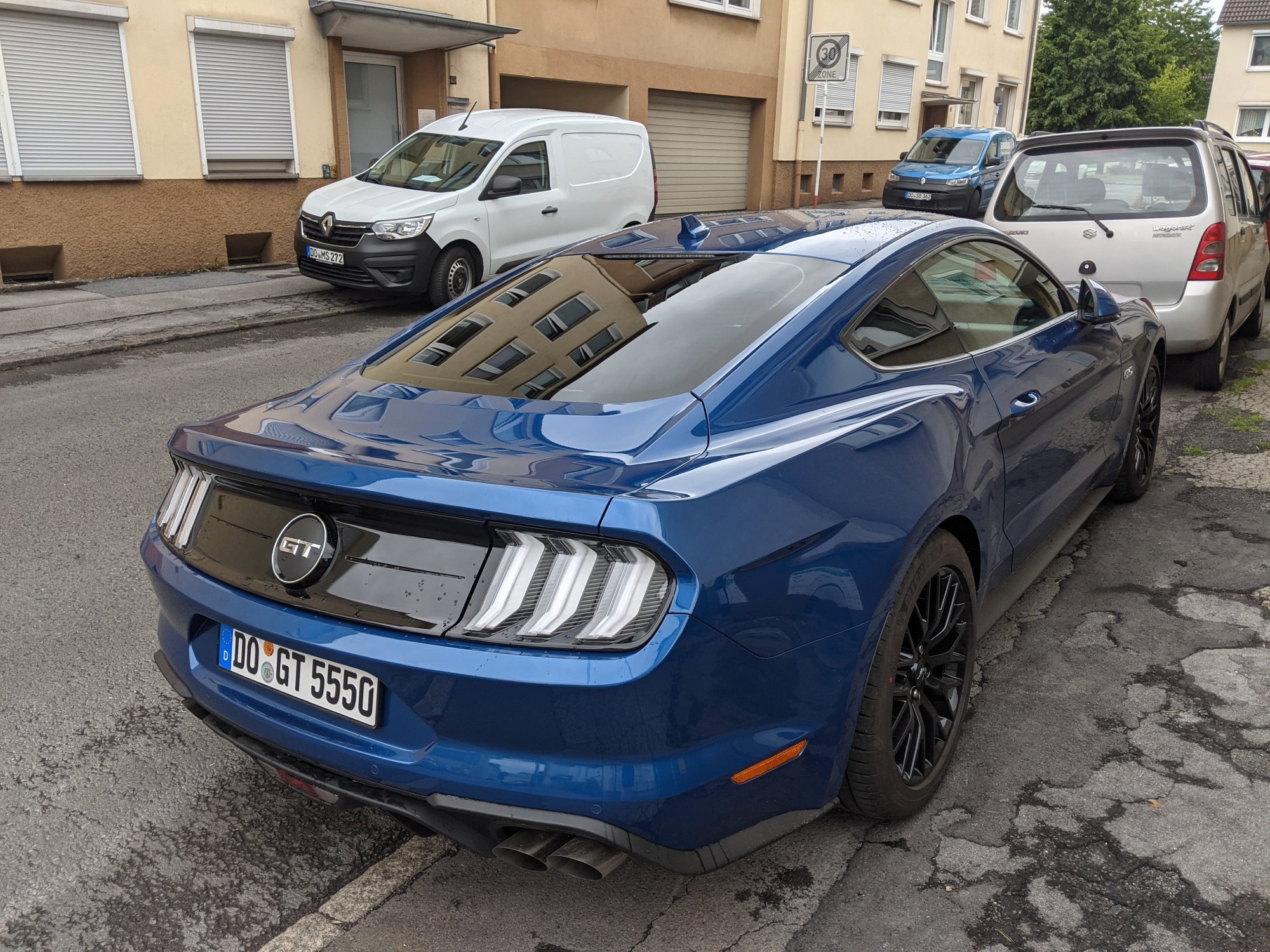 Didn't want it too dark so I could still see out the back, so I went with an 85% tint. Looks very dark from the outside, but surprisingly light from the inside. Exactly what I was looking for. 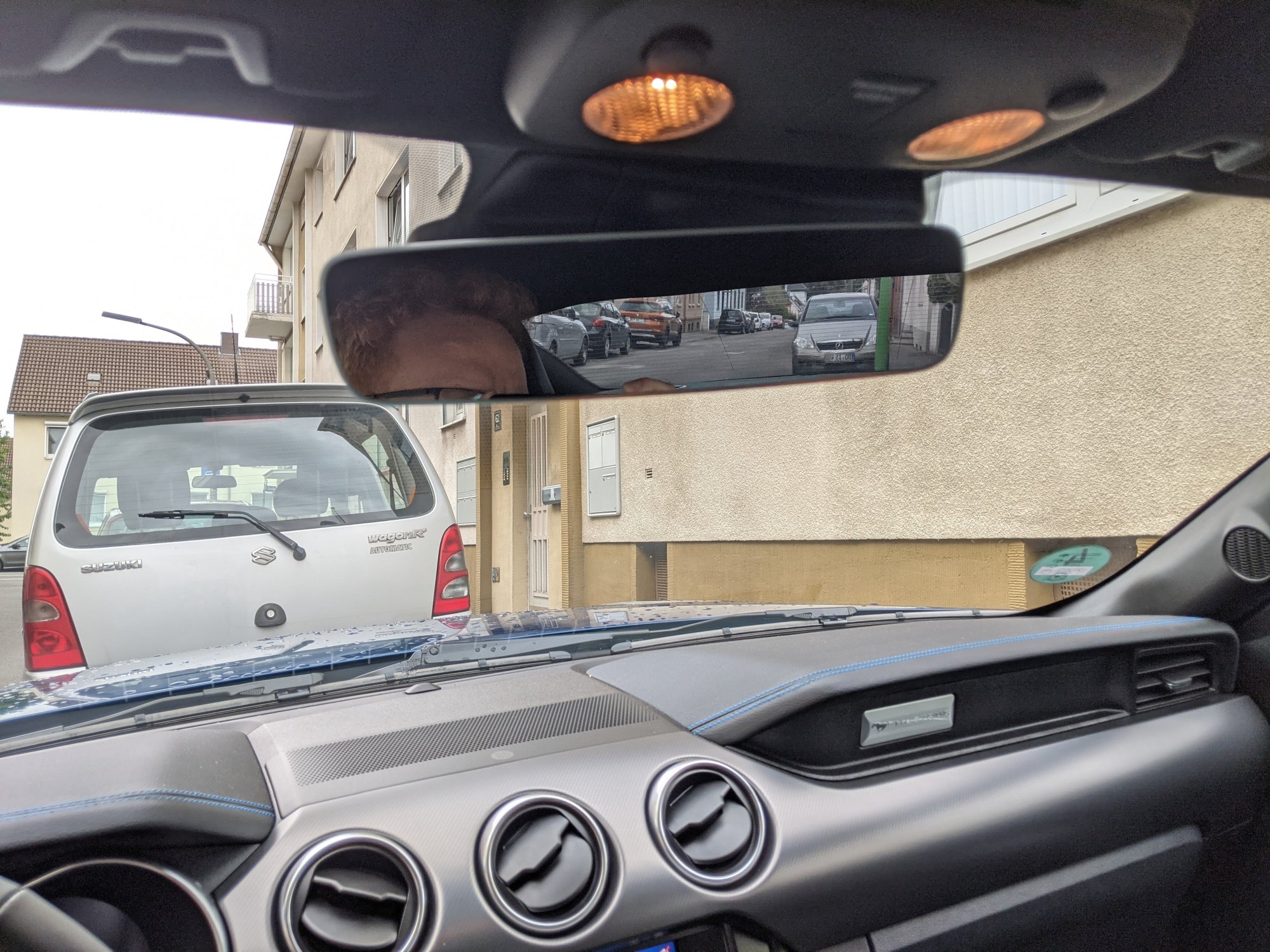 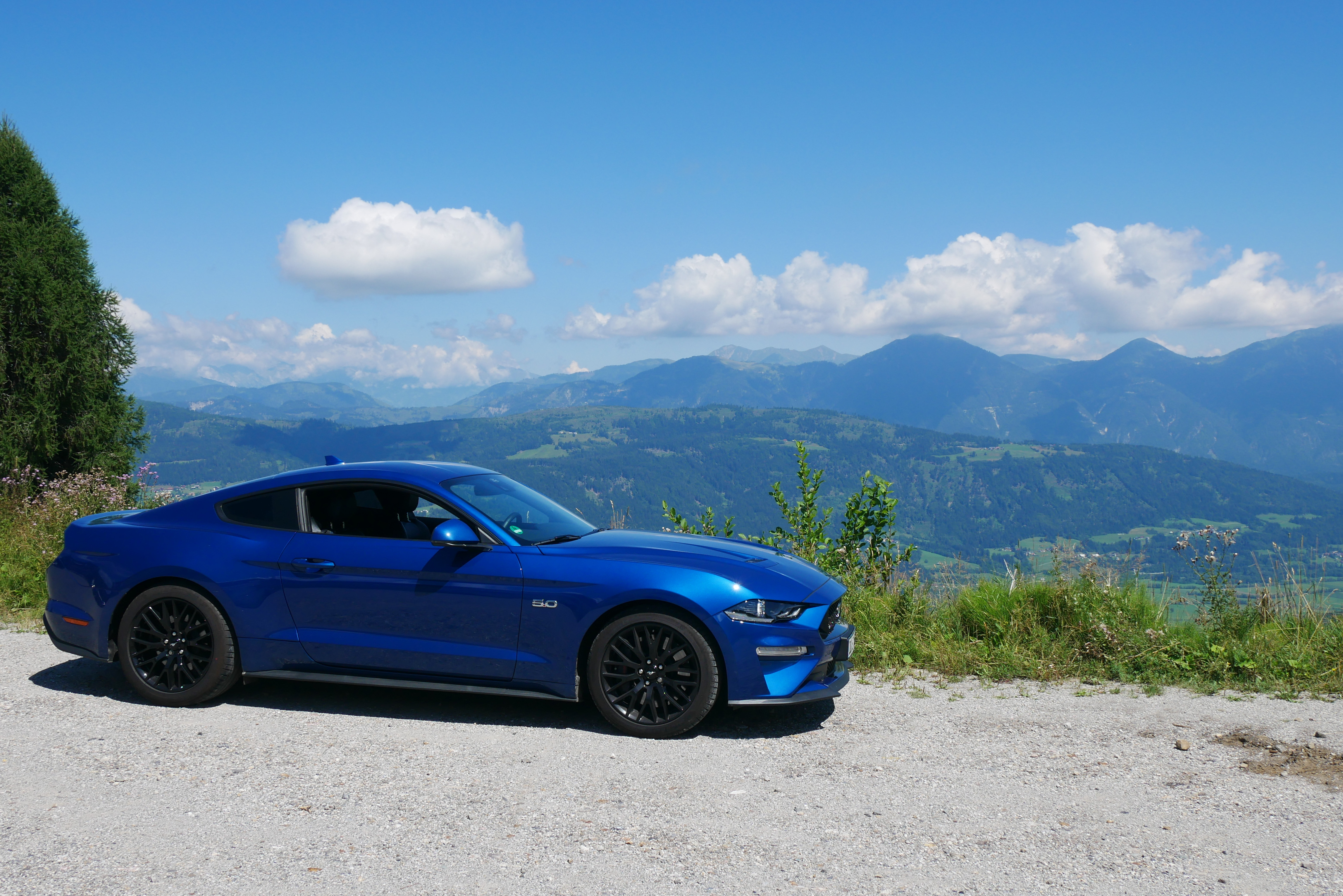 Roadtrip 2022 happened and I finally got a chance to stretch the Mustang's legs and do what I bought it for. In the span of 10 days I more than doubled the km on the car, cracking the 5k mark. 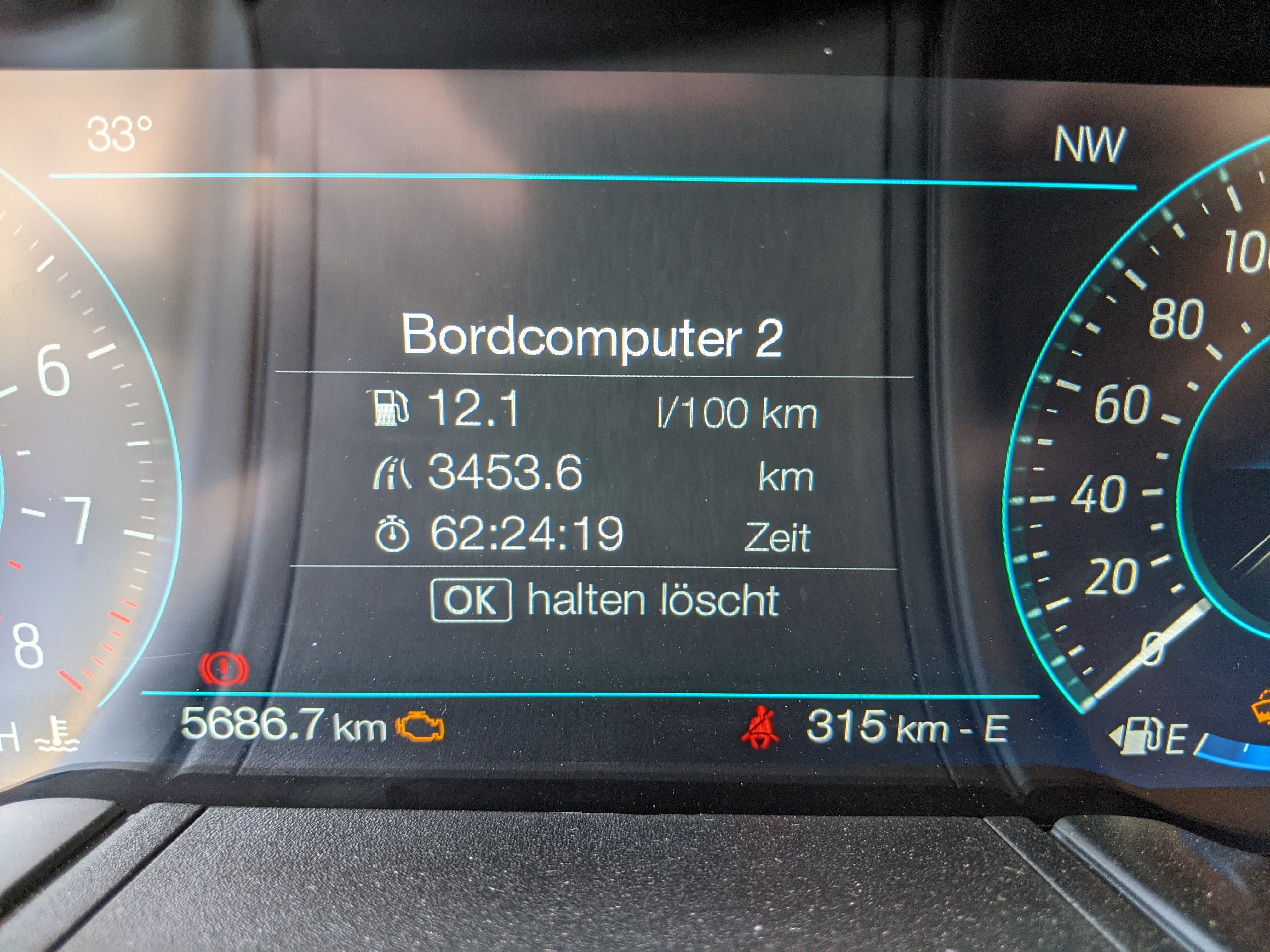 It was awesome, the car delivered everything I wanted it to and I am very happy with my decision.
My unorganized collection of thoughts:
- Very comfortable long distance cruiser, but that shouldn't surprise anyone
- The handling really surprised me positively. I'm still not sure if the different settings in the adaptive suspension make that much of a difference, but in normal/comfort mode it smooths out even really bad roads without getting too soft or wallowy and is perfectly fine for sporty driving. There was one instance where the back slightly stepped out on me, but that was when I was intentionally going hard on the throttle and maybe hit a wet patch in a bend. Otherwise I never had an instance where the chassis felt unsettled due to the road surface, only from my steering and throttle inputs. And even then I felt the rear end getting light early enough to back off.
- Even on super small and tight alpine passes the size and weight never felt like an issue. Until hitting the hairpins on Stelvio.
- Power is of course more than enough, especially on the kind of tight mountain roads we drove you can barely use all the power. Both because you get to way too high speeds way too quickly and just because corners are too tight. Except for stuff like coming out of an uphill hairpin onto a straight I think I did most passes we drove in 2nd or 3rd gear using 1/4 of the throttle at most. I suspect I'd have just as much fun with 300hp.
- I'm glad I picked almost all the options. Ventilated seats were a life saves on all the 30+ °C days, especially after parking for lunch. And adaptive cruise control made otherwise annoying transit stretches a lot more tolerable.
- The regular leather seats are great, very comfy and great side support. Never felt like I needed more.
- For a scrub like me the automatic throttle blip when downshifting is just amazing.

Some small niggles:
- The windows have the remote open comfort feature, where if you double click and hold the unlock button on the fob they will roll down remotely. This doesn't work in reverse for rolling up the windows though, which was an annoyance a couple of times.
- The pre-collision alert system is... weird. I've had several situations where it beeped at me without much of a cause apparent to me.
- Shockingly for an American car, it doesn't have enough cup holders. There's only two in the center console and that's just enough if you're driving all day (and have on taken up by a baofeng)

And a couple actual issues:
- There's an issue with idle when the engine is hot. If you park it while hot and then start it again quickly it will sometimes idle very poorly, revs dropping way too low and almost stalling. And more importantly when the engine is hot and you put it in neutral sometimes the revs just drop below idle and the engine stalls. This happened to me quite a few times when driving, e.g. when coming up to a roundabout from a country road and keeping the clutch in for a second or two. On the 450km / 9 hour transit day to ringmeet, which was a very hot day and a lot of nonstop driving, this happened about a dozen times. But I already have a probable cause, since Joe had his OBD reader with him at ringmeet and wanted to see what it could do with the Mustang. So we discovered that it had a fault code for one cylinder bank running too lean. I'm not too fussed about it, since I'm confident it'll get taken care of under warranty.
- Not related to the road trip, but I discovered a paint chip by the corner of the trunk lid. Turns out the gaps around the lid aren't adjusted right so the corner hits the body when you slam the lid. Already went to a dealer and they immediately said that's a warranty repair and sent the report to Ford, just waiting for the confirmation. 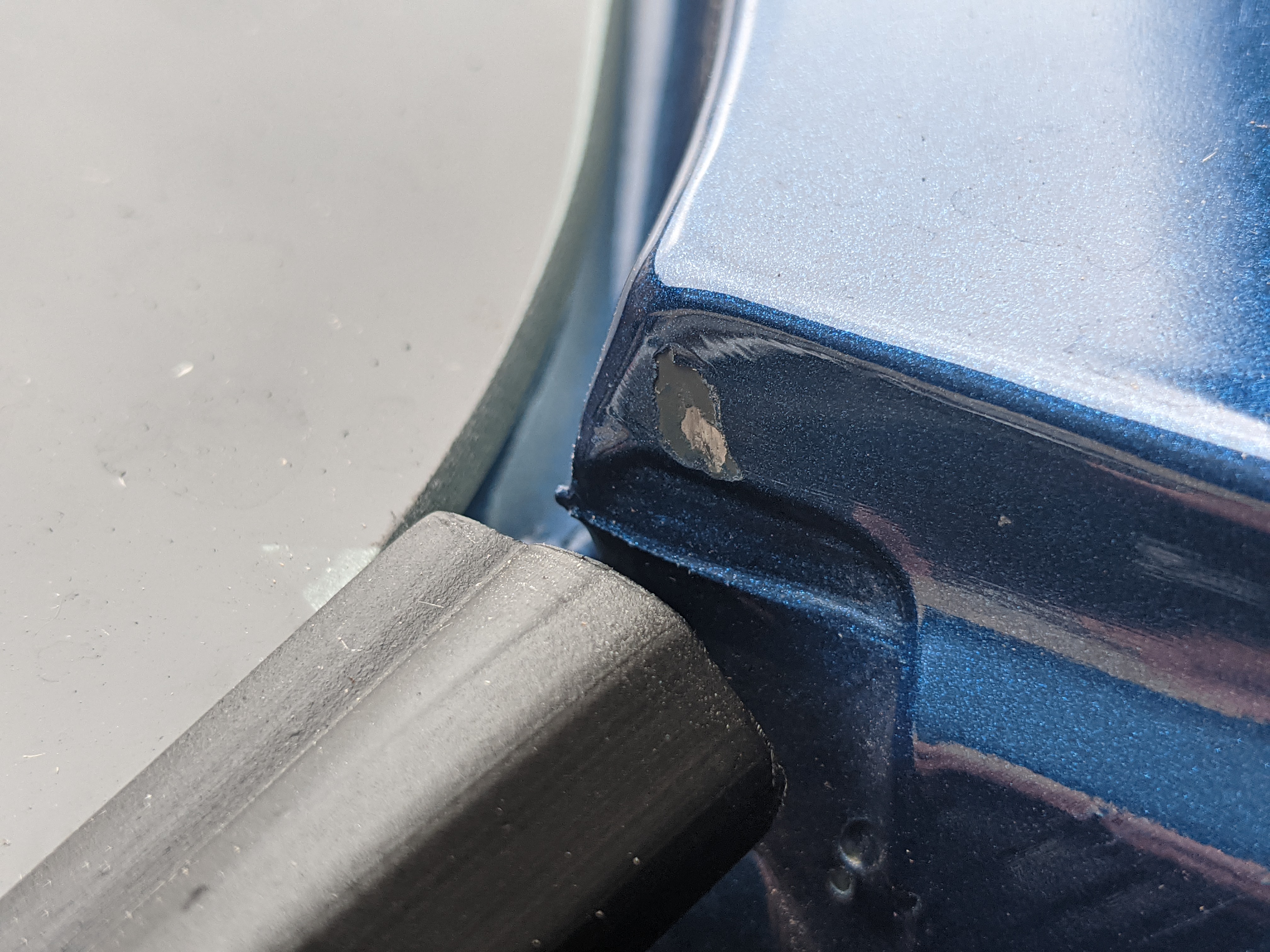 Now with all of that shit out of the way, here's a dump of beauty shots from the trip. 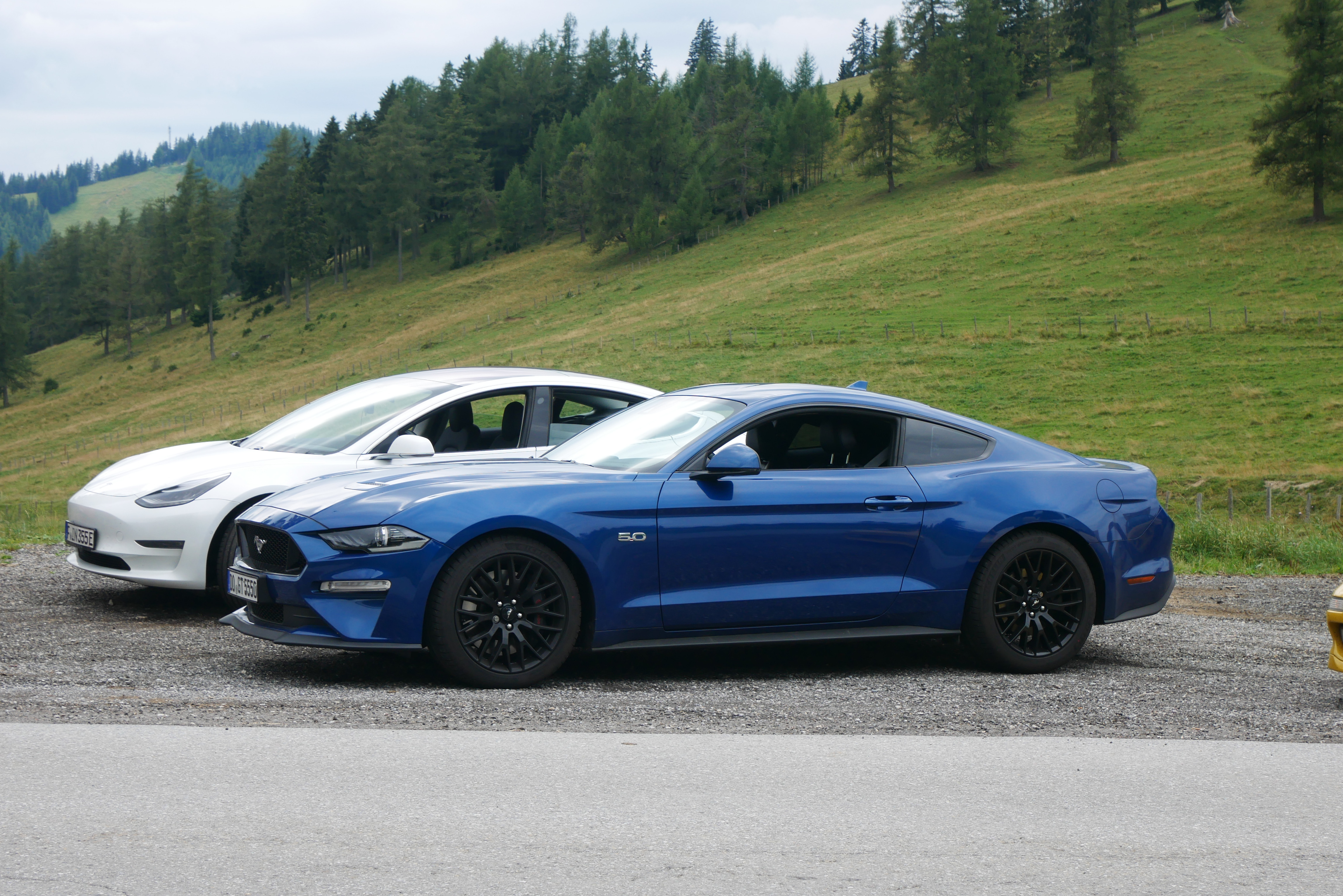 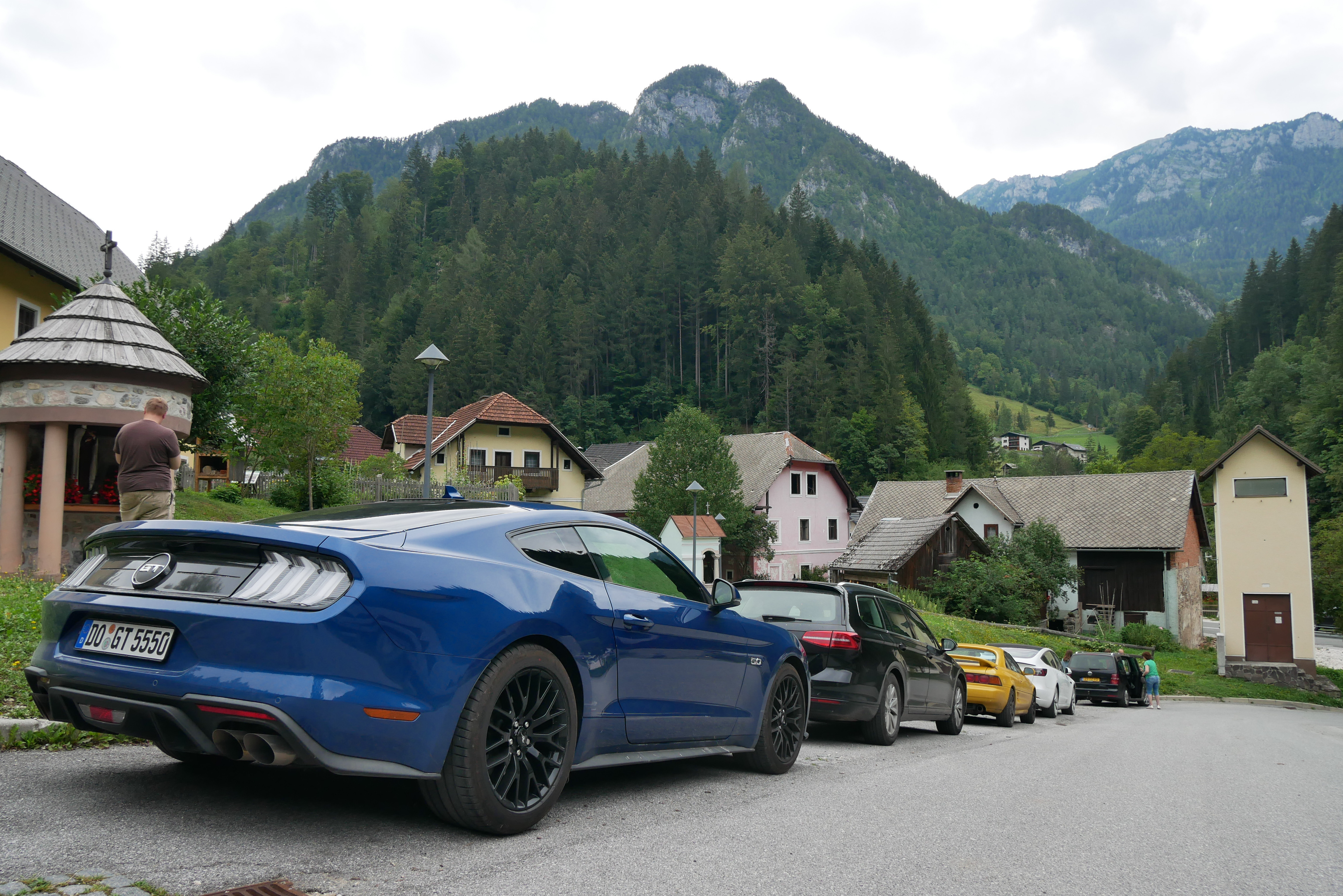 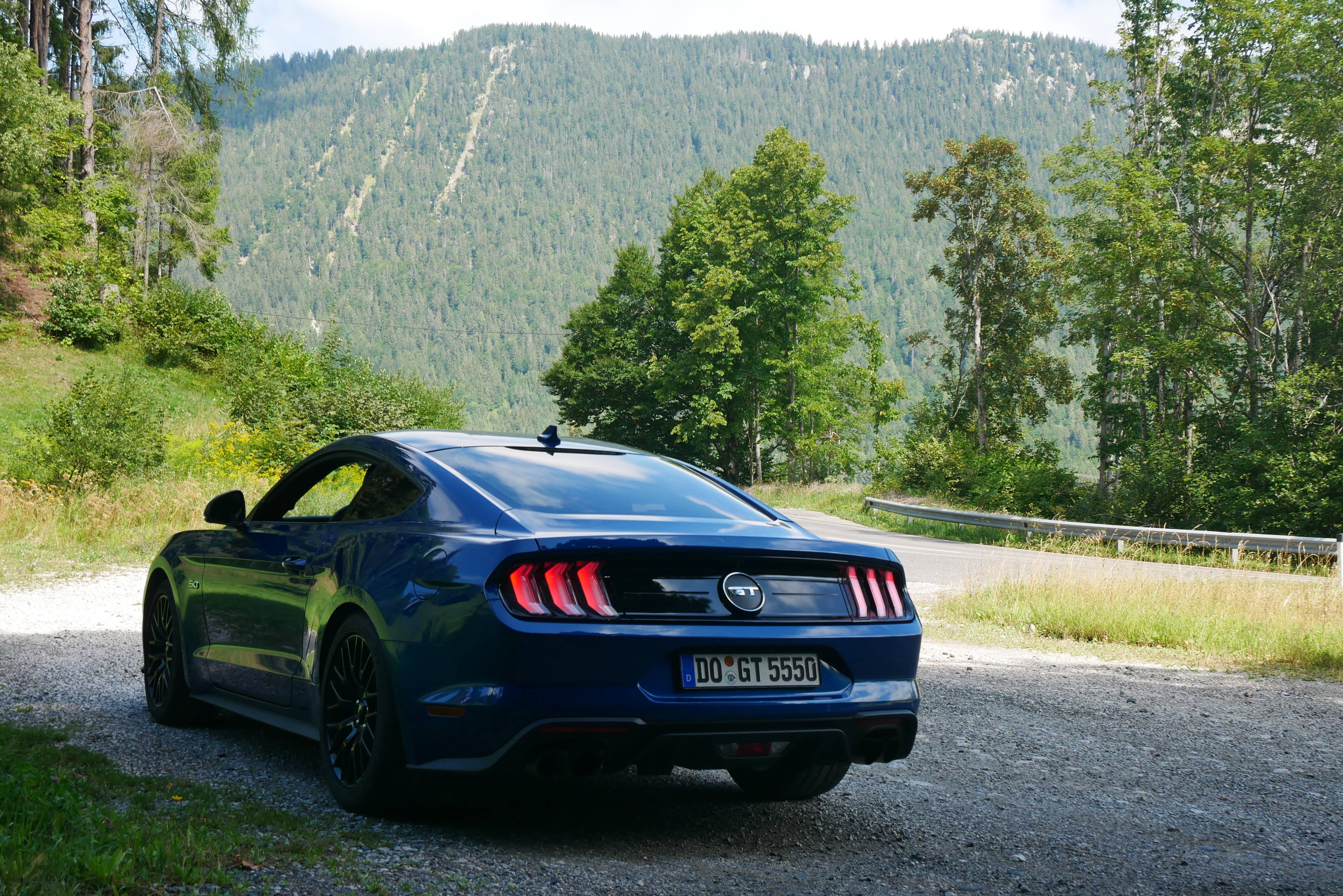 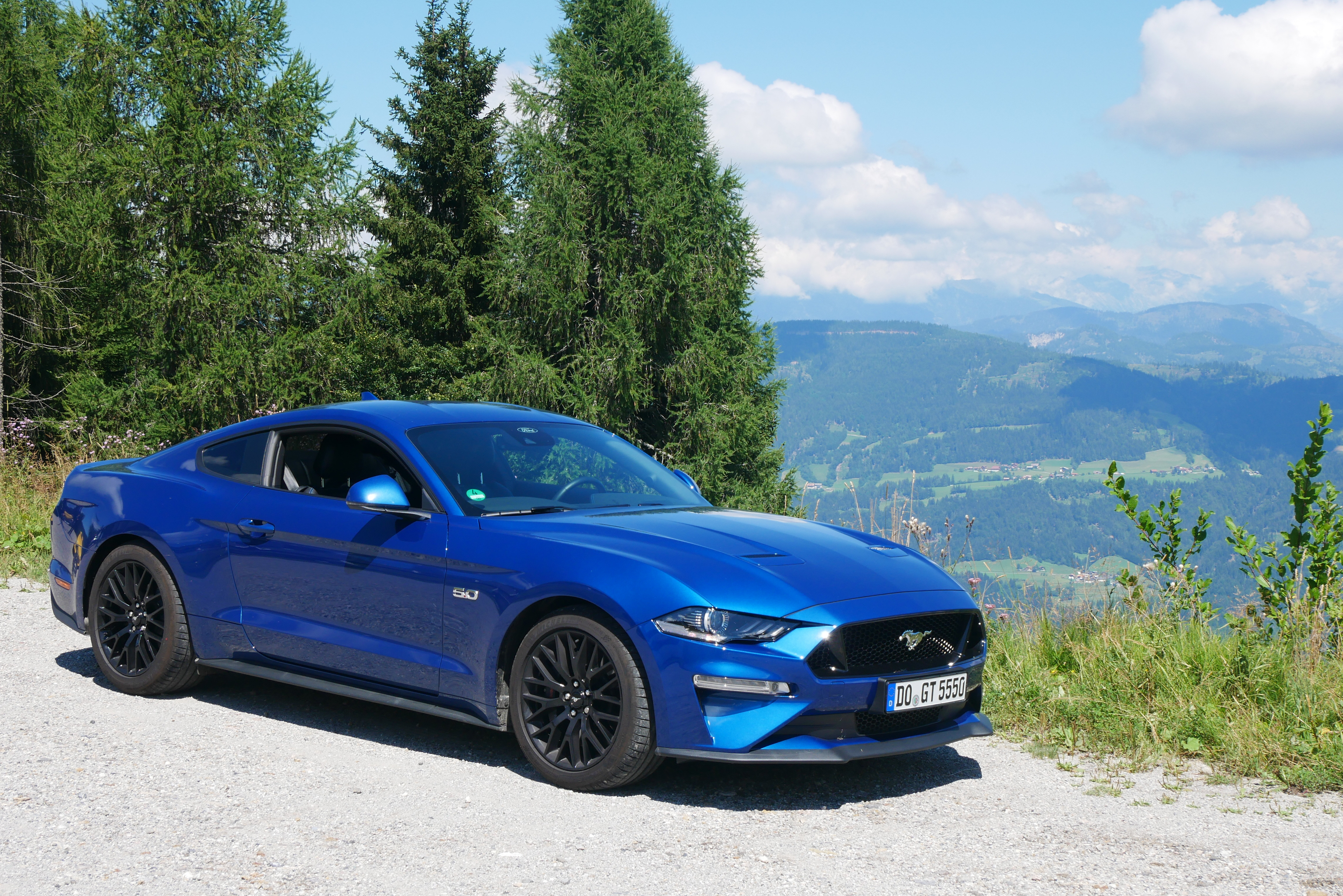 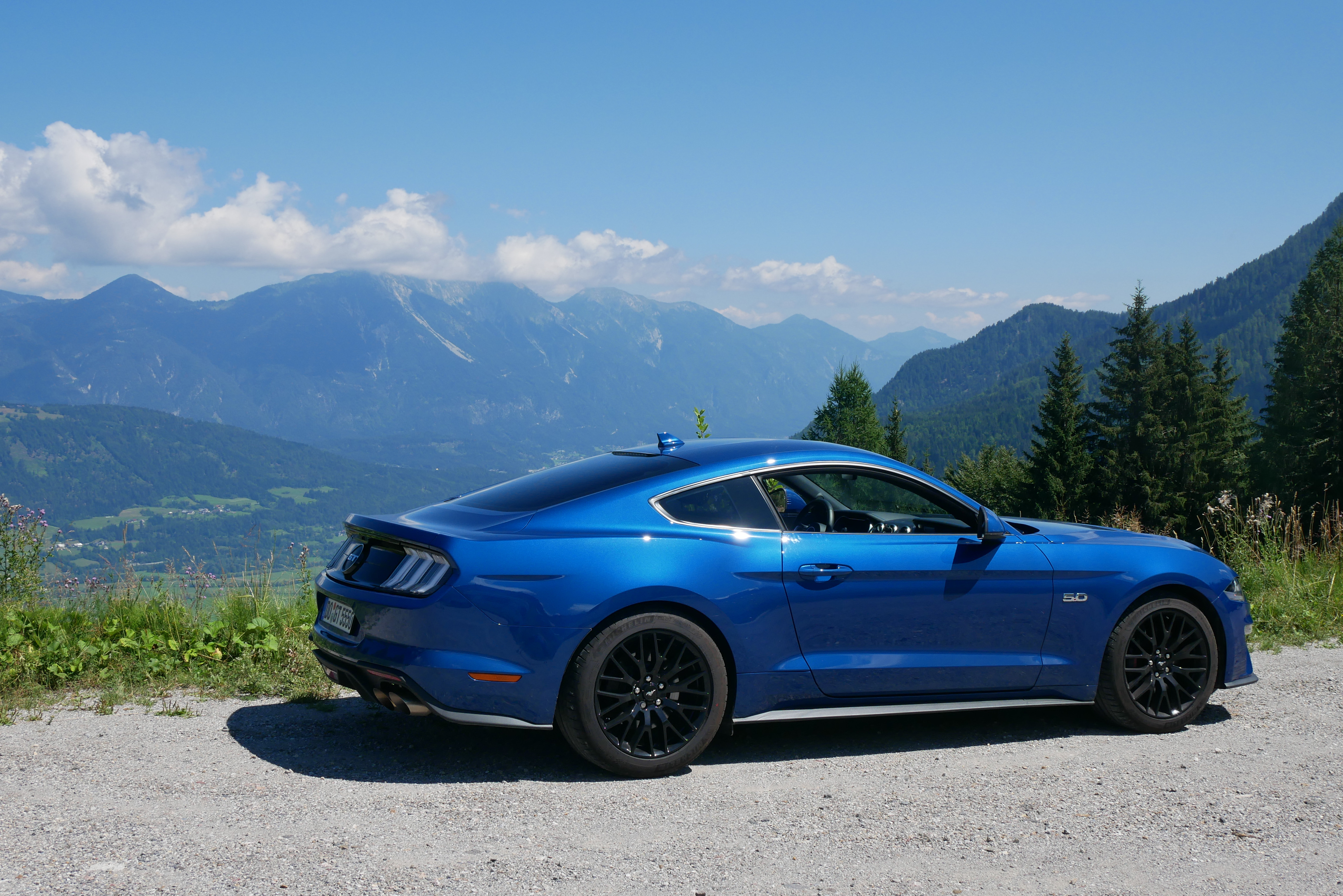 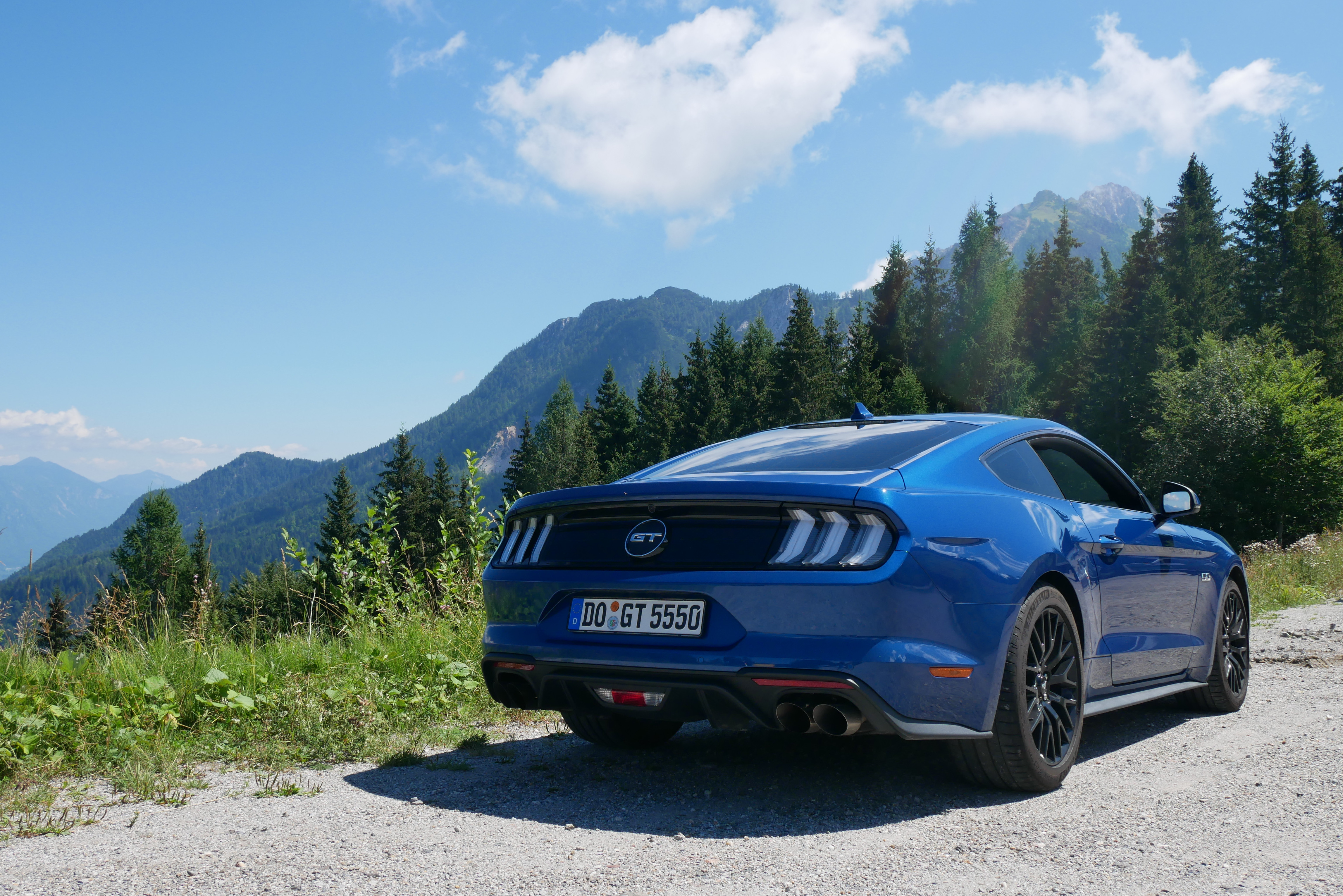 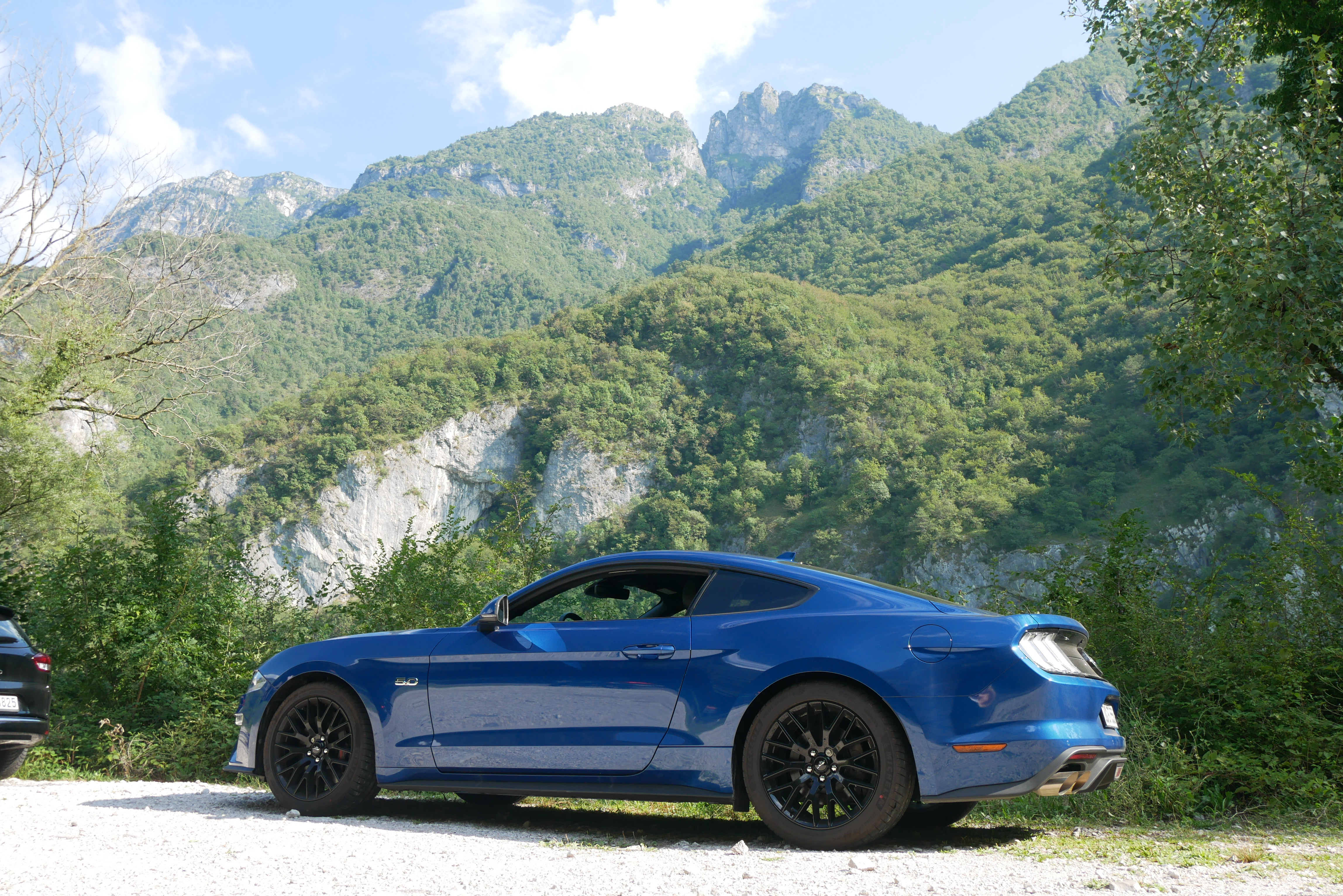 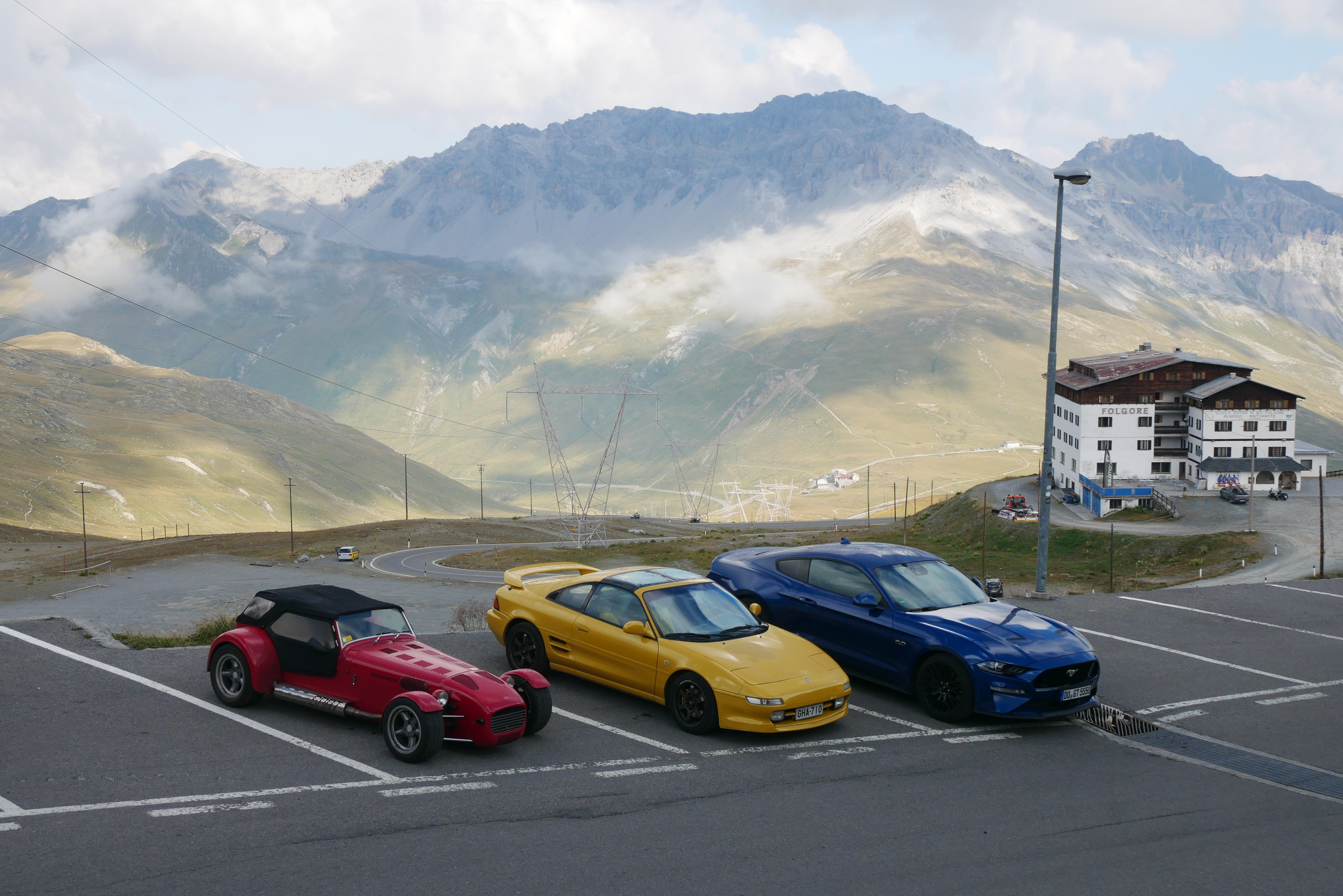 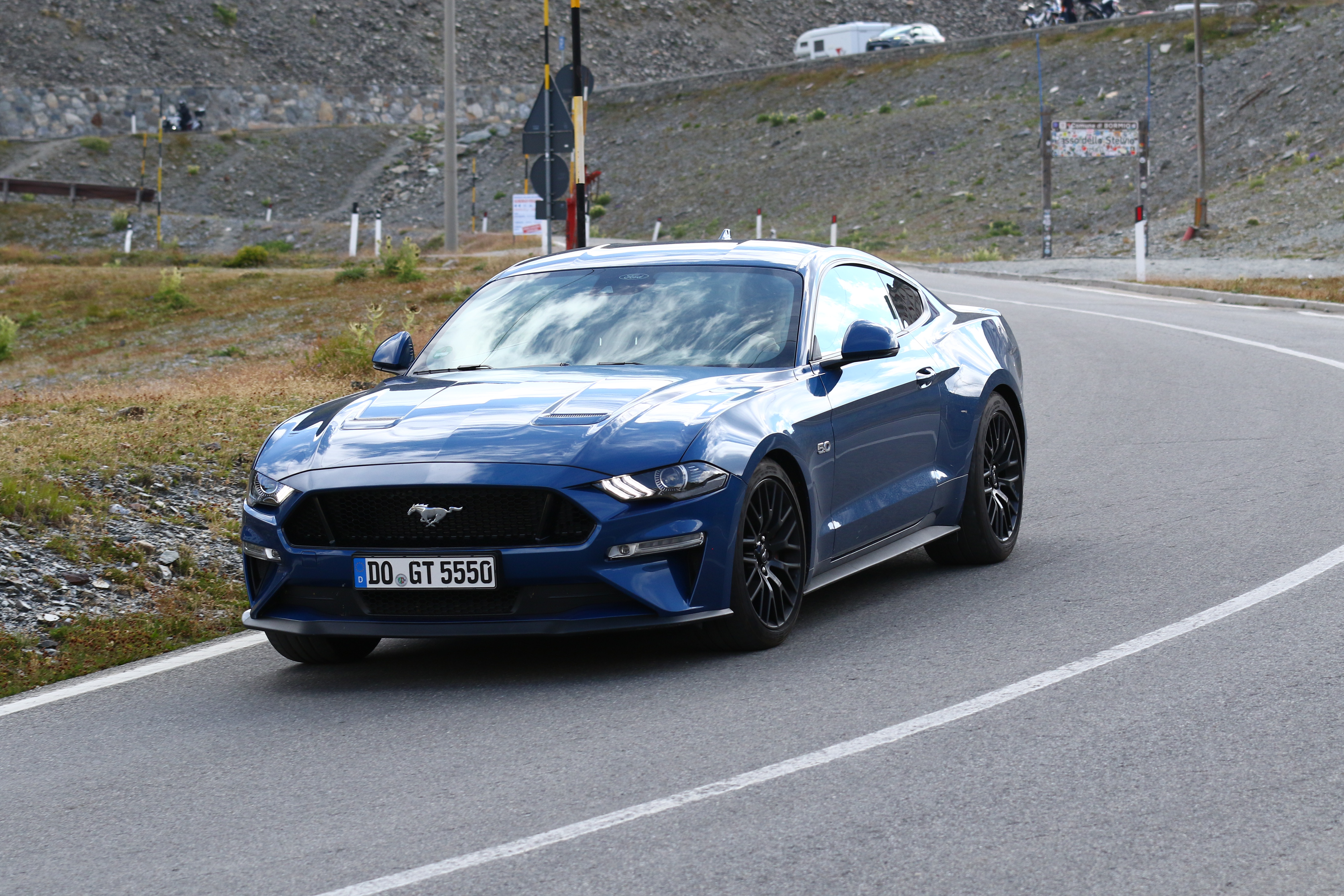 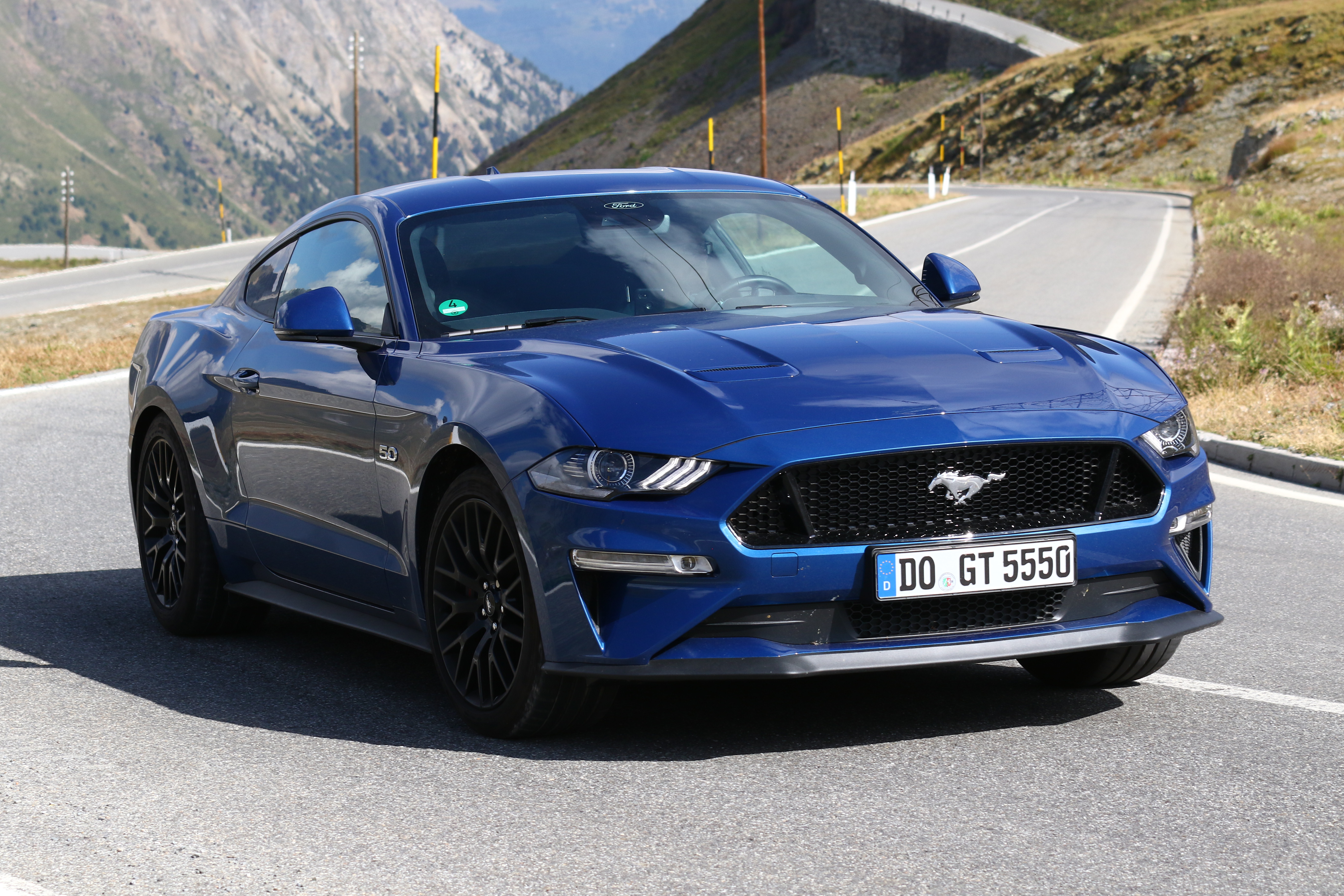 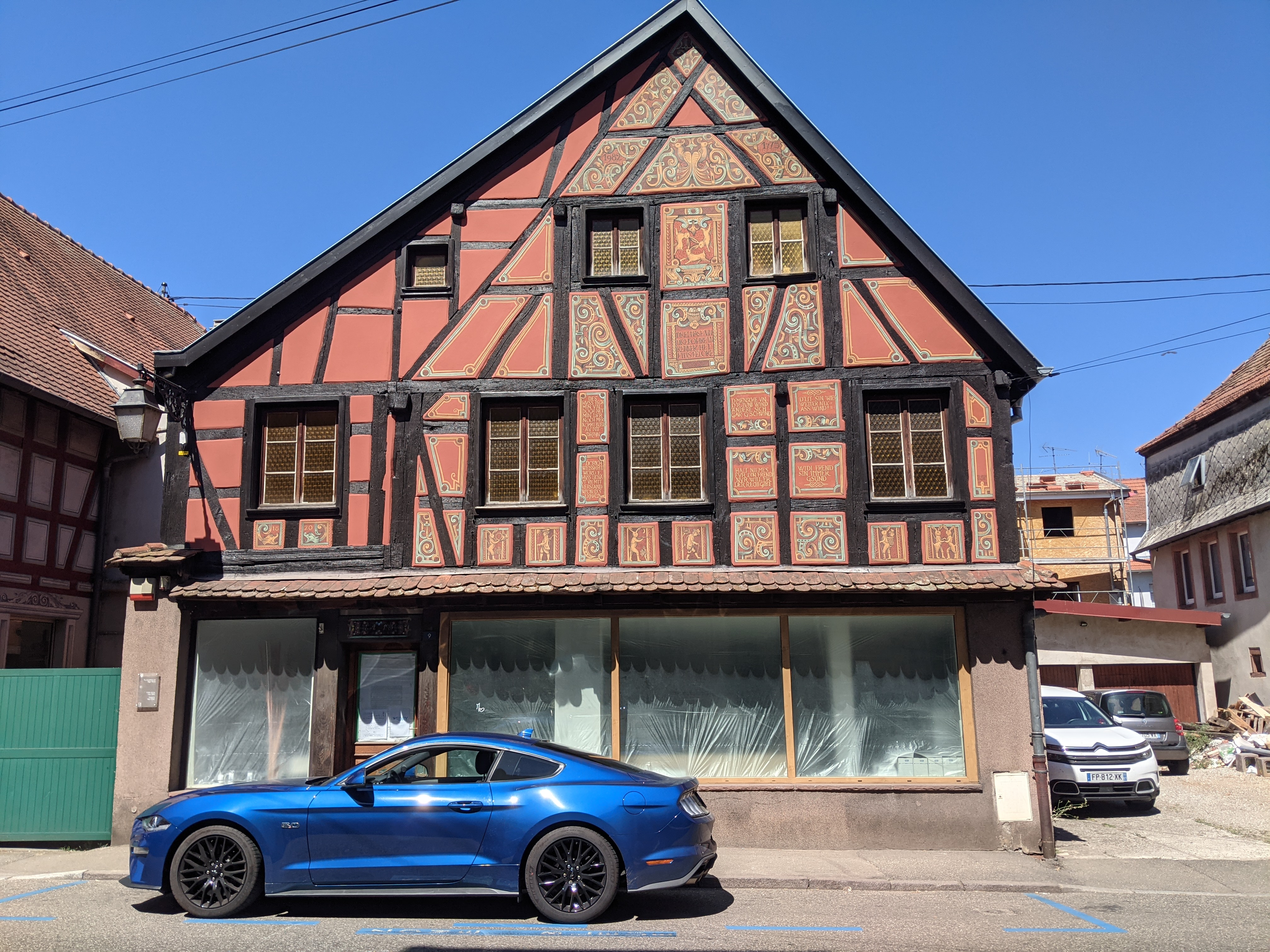 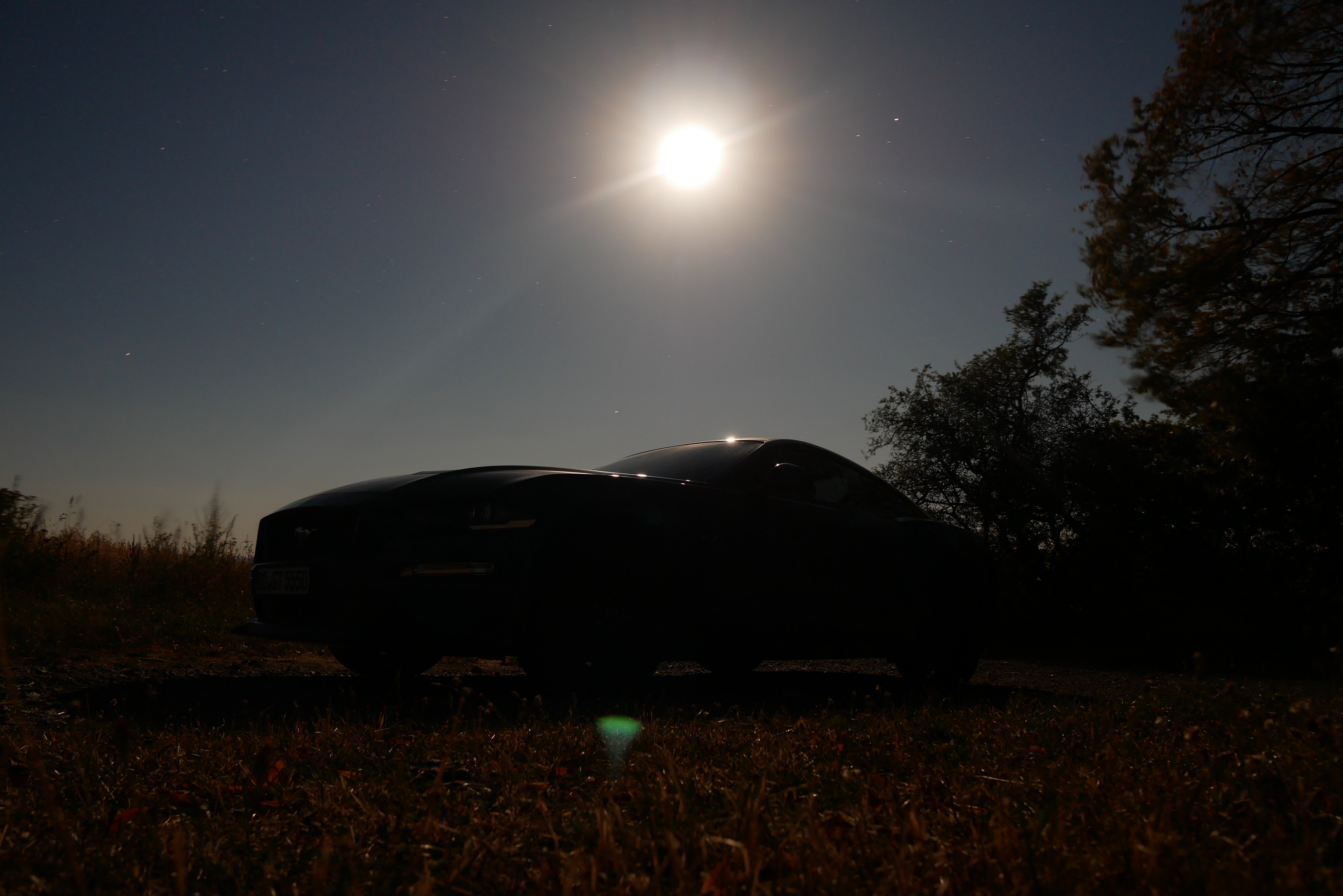 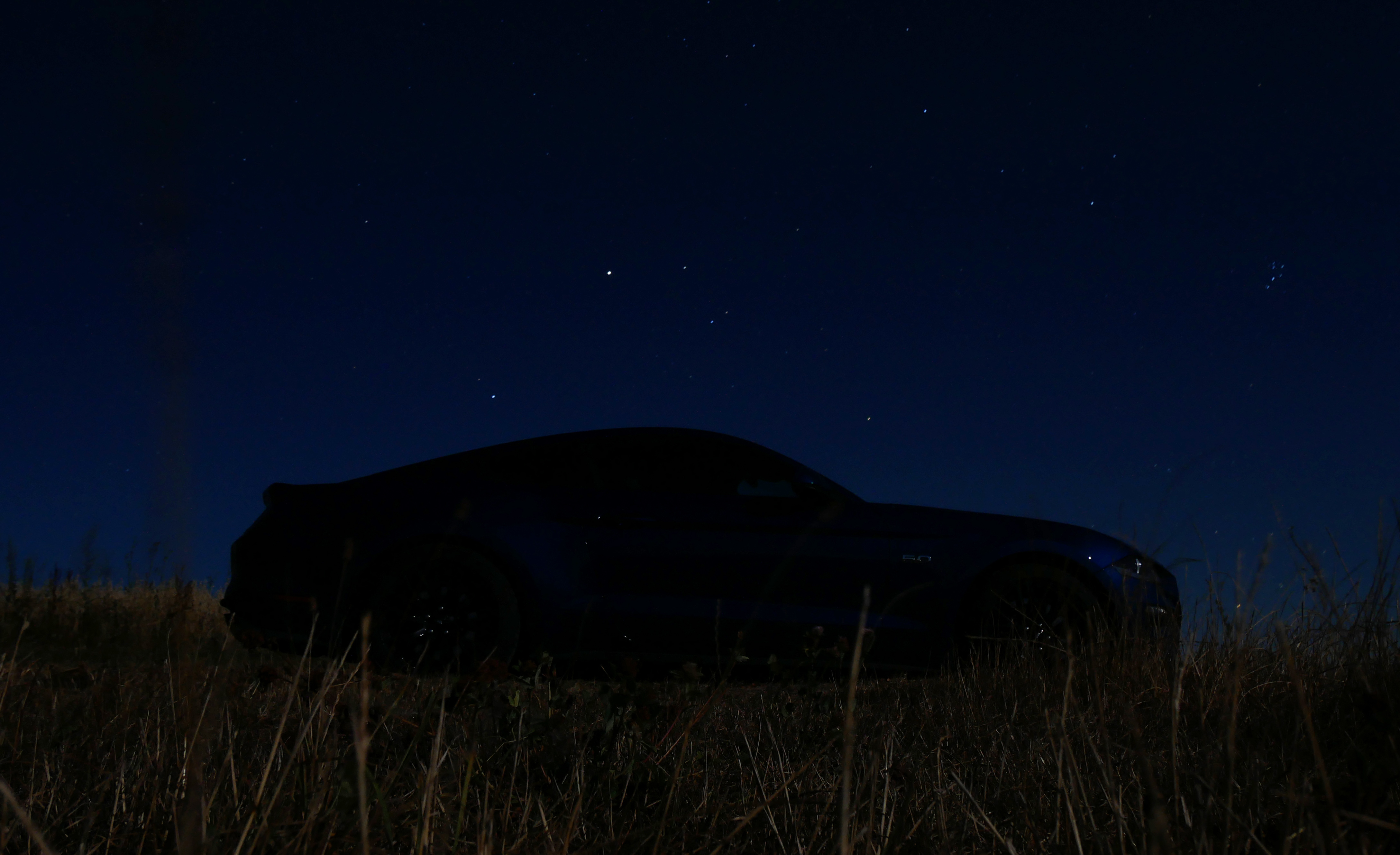 I was really impressed with the refinement on our little jaunt on the motorway. Even at 250 it was still possible to have a normal conversation!

That V8 noise is just great too

Dammit. During the post-roadtrip wash I discovered a paint chip behind the driver's door. Will see if I can get that taken care of together with one on the trunk and then maybe look into some protective film... 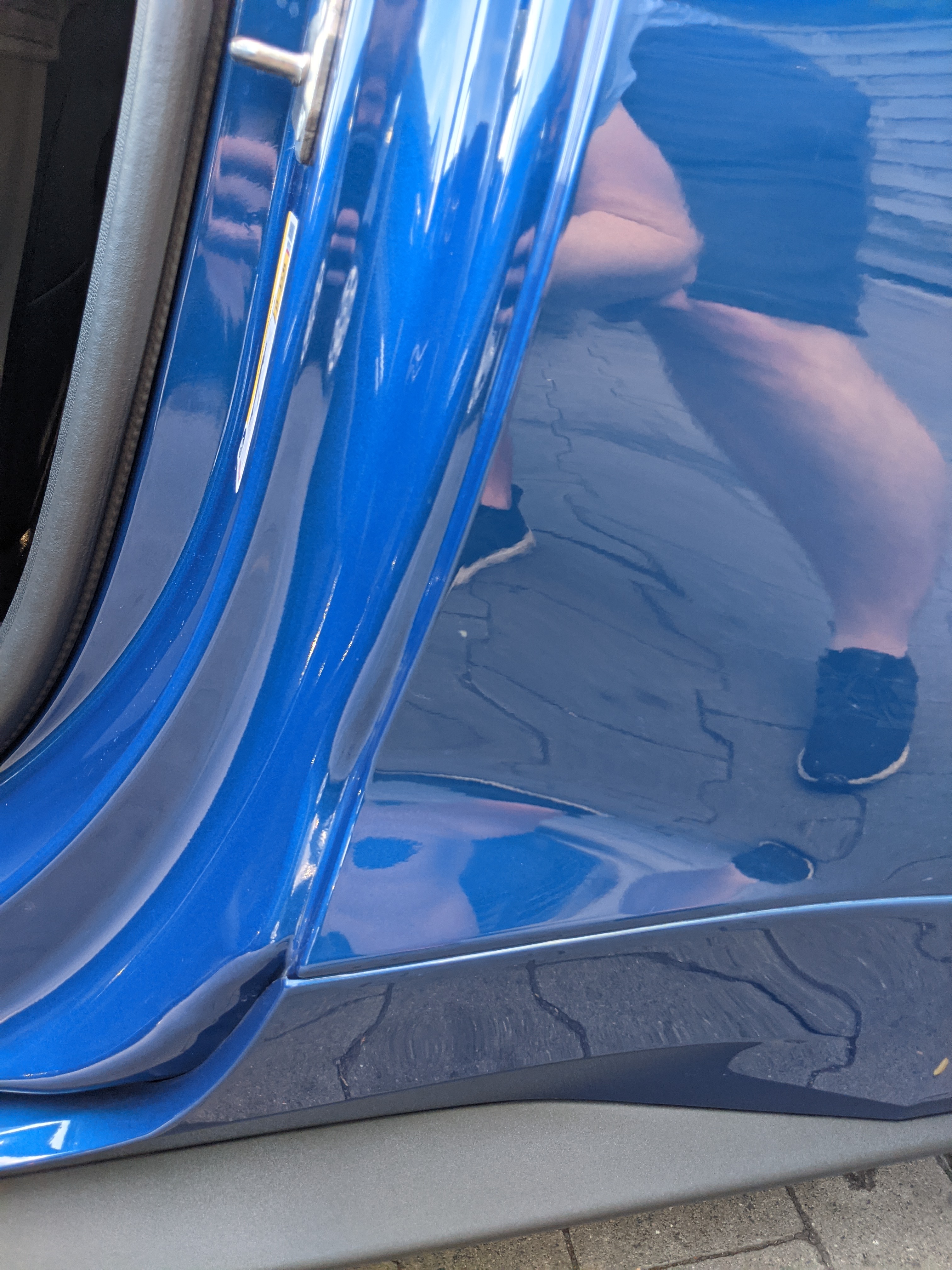 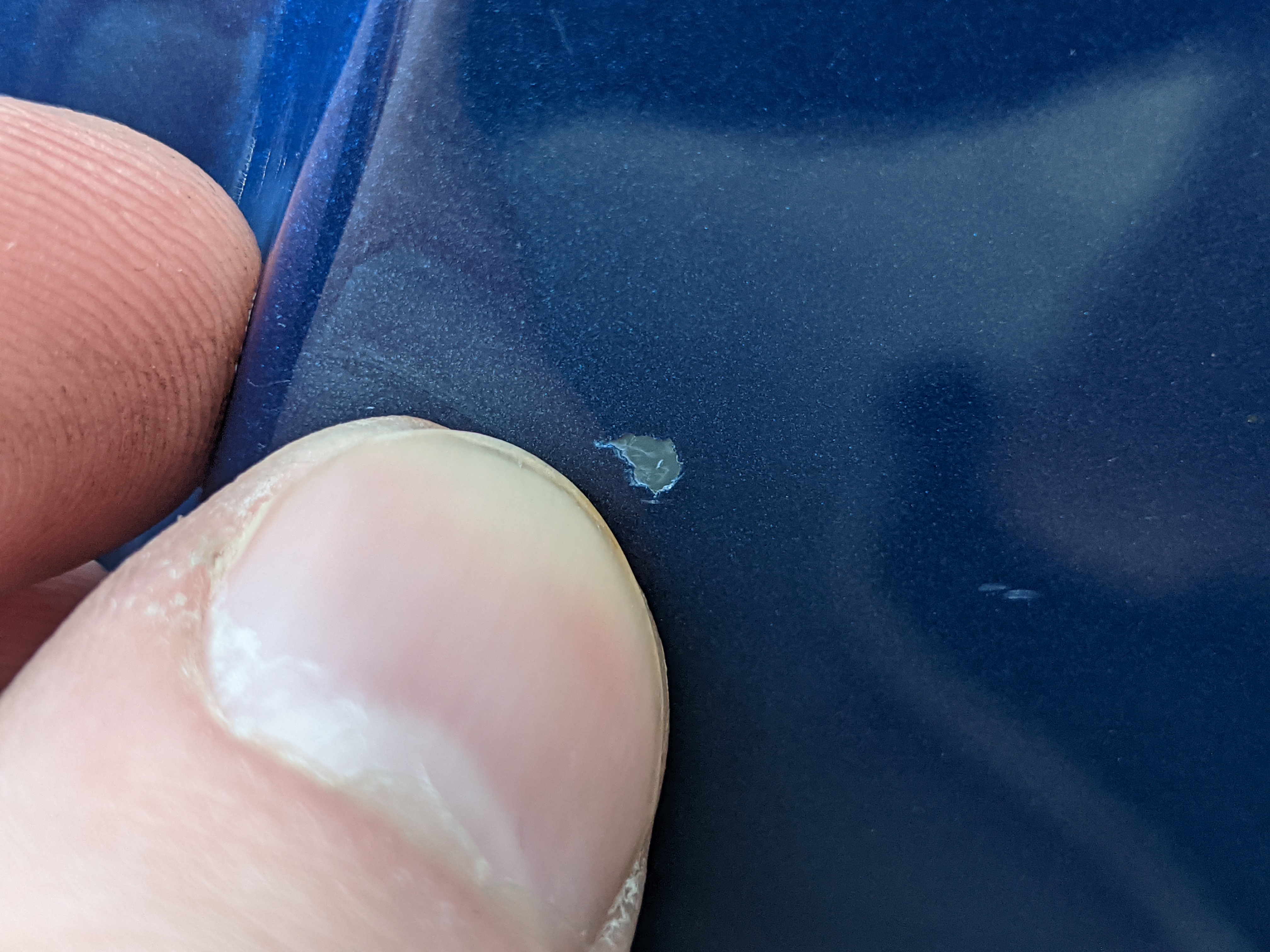